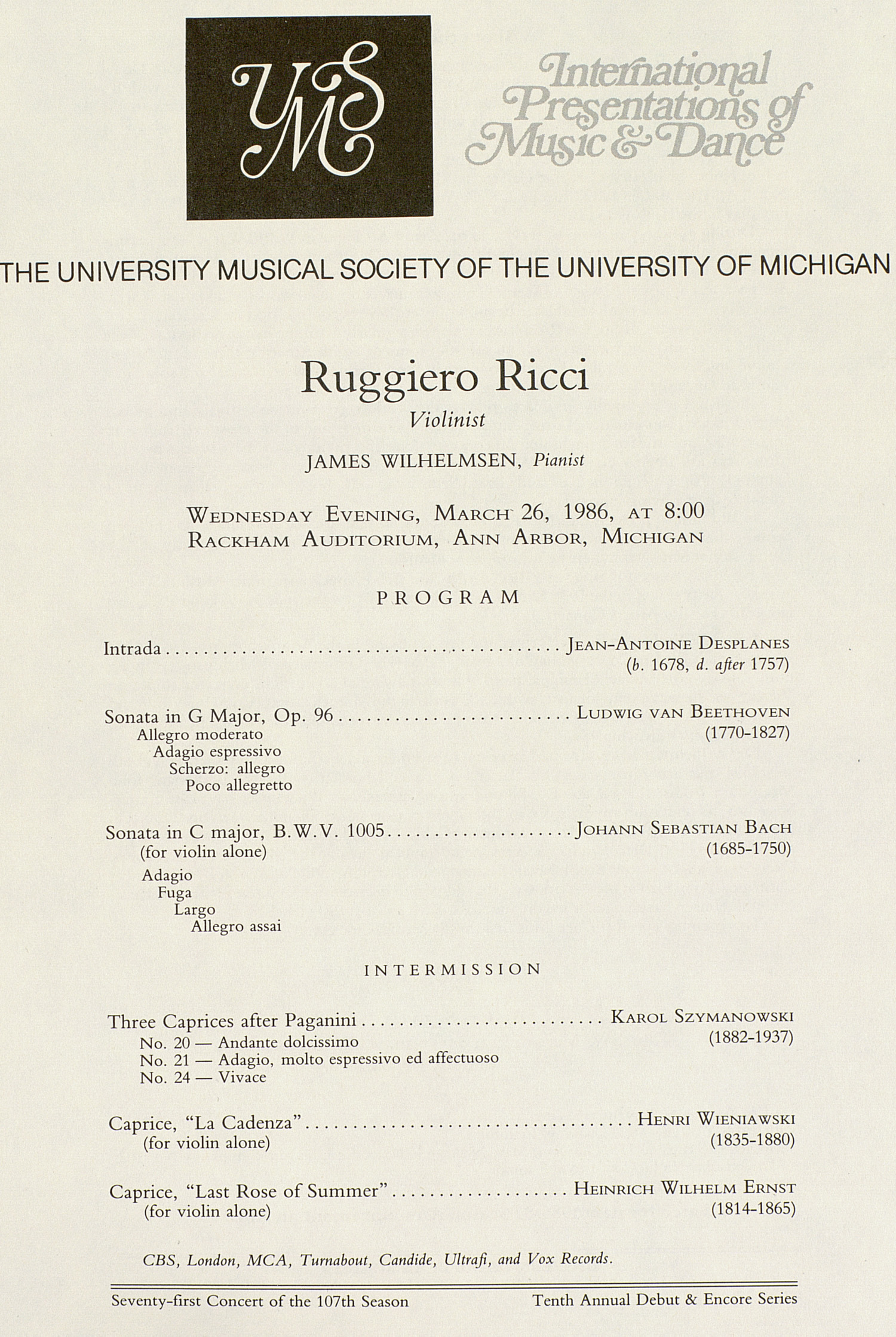 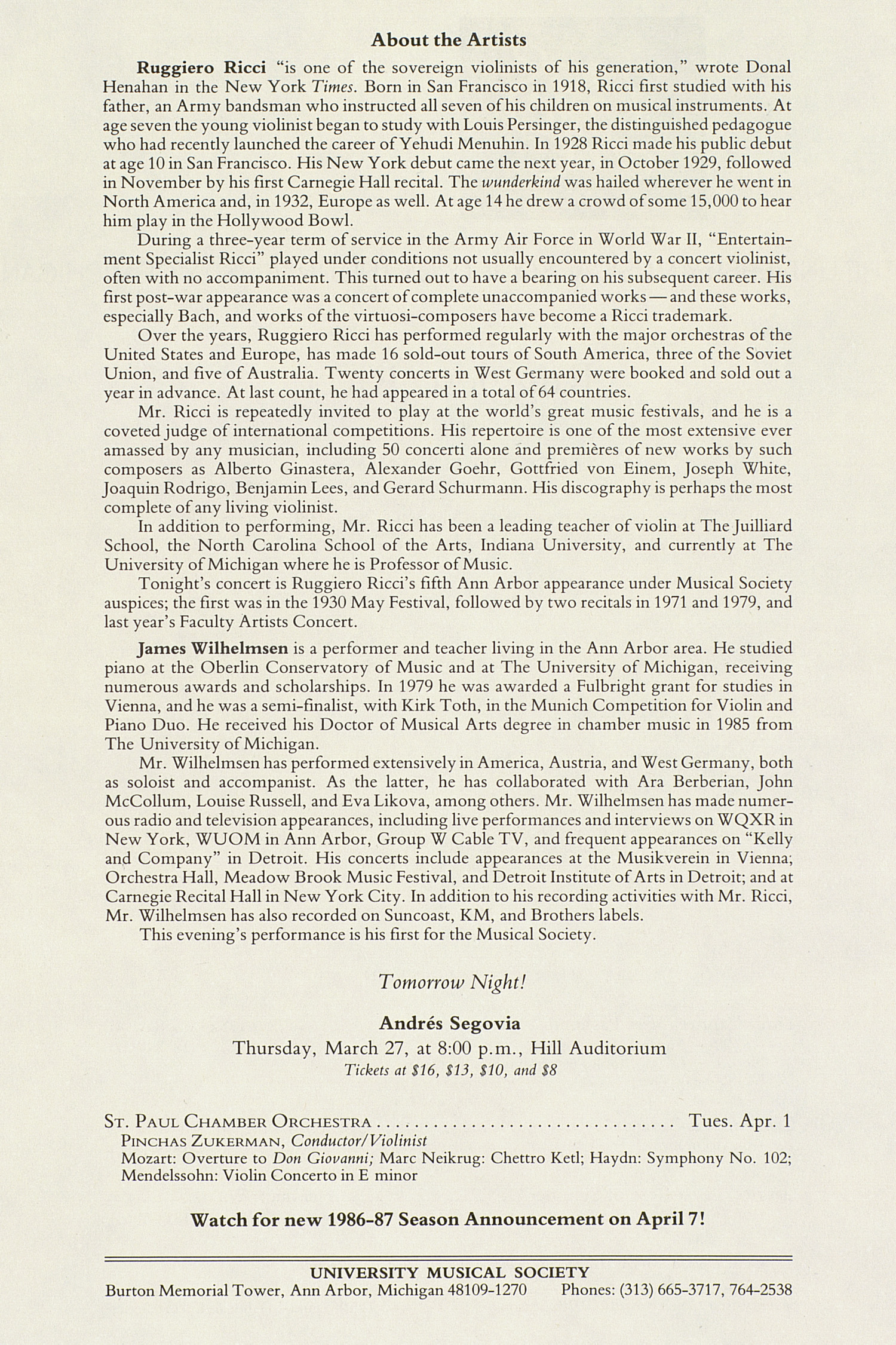 iteifiatipnal
rHE UNIVERSITY MUSICAL SOCIETY OF THE UNIVERSITY OF MICHIGAN
Ruggiero Ricci
Violinist JAMES WILHELMSEN, Pianist
Wednesday Evening, March 26, 1986, at 8:00 Rackham Auditorium, Ann Arbor, Michigan
PROGRAM
Intrada..........................................Jean-Antoine Desplanes
{b. 1678, d. after 1757)
Sonata in G Major, Op. 96.........................Ludwig van Beethoven
Allegro moderato (1770-1827)
Adagio espressivo Scherzo: allegro Poco allegretto
Sonata in C major, B.W.V. 1005....................Johann Sebastian Bach
(for violin alone) (1685-1750)
Adagio Fuga Largo
Allegro assai
INTERMISSION
Three Caprices after Paganini..........................Karol Szymanowski
No. 20 -Andante dolcissimo (1882-1937)
No. 21 -Adagio, molto espressivo ed affectuoso No. 24 -Vivace
Caprice, "La Cadenza"...................................Henri Wieniawski
(for violin alone) (1835-1880)
Caprice, "Last Rose of Summer"...................Heinrich Wilhelm Ernst
(for violin alone) (1814-1865)
CBS, London, MCA, Turnabout, Candide, Ultrafi, and Vox Records. Seventy-first Concert of the 107th Season Tenth Annual Debut & Encore Series
About the Artists
Ruggiero Ricci "is one of the sovereign violinists of his generation," wrote Donal Henahan in the New York Times. Born in San Francisco in 1918, Ricci first studied with his father, an Army bandsman who instructed all seven of his children on musical instruments. At age seven the young violinist began to study with Louis Persinger, the distinguished pedagogue who had recently launched the career of Yehudi Mcnuhin. In 1928 Ricci made his public debut at age 10 in San Francisco. His New York debut came the next year, in October 1929, followed in November by his first Carnegie Hall recital. The wunderkind was hailed wherever he went in North America and, in 1932, Europe as well. At age 14 he drew a crowd of some 15,000 to hear him play in the Hollywood Bowl.
During a three-year term of service in the Army Air Force in World War II, "Entertain?ment Specialist Ricci" played under conditions not usually encountered by a concert violinist, often with no accompaniment. This turned out to have a bearing on his subsequent career. His first post-war appearance was a concert of complete unaccompanied works -and these works, especially Bach, and works of the virtuosi-composers have become a Ricci trademark.
Over the years, Ruggiero Ricci has performed regularly with the major orchestras of the United States and Europe, has made 16 sold-out tours of South America, three of the Soviet Union, and five of Australia. Twenty concerts in West Germany were booked and sold out a year in advance. At last count, he had appeared in a total of 64 countries.
Mr. Ricci is repeatedly invited to play at the world's great music festivals, and he is a coveted judge of international competitions. His repertoire is one of the most extensive ever amassed by any musician, including 50 concerti alone and premieres of new works by such composers as Alberto Ginastera, Alexander Goehr, Gottfried von Einem, Joseph White, Joaquin Rodrigo, Benjamin Lees, and Gerard Schurmann. His discography is perhaps the most complete of any living violinist.
In addition to performing, Mr. Ricci has been a leading teacher of violin at The Juilliard School, the North Carolina School of the Arts, Indiana University, and currently at The University of Michigan where he is Professor of Music.
Tonight's concert is Ruggiero Ricci's fifth Ann Arbor appearance under Musical Society auspices; the first was in the 1930 May Festival, followed by two recitals in 1971 and 1979, and last year's Faculty Artists Concert.
James Wilhelmsen is a performer and teacher living in the Ann Arbor area. He studied piano at the Oberlin Conservatory of Music and at The University of Michigan, receiving numerous awards and scholarships. In 1979 he was awarded a Fulbright grant for studies in Vienna, and he was a semi-finalist, with Kirk Toth, in the Munich Competition for Violin and Piano Duo. He received his Doctor of Musical Arts degree in chamber music in 1985 from The University of Michigan.
Mr. Wilhelmsen has performed extensively in America, Austria, and West Germany, both as soloist and accompanist. As the latter, he has collaborated with Ara Berberian, John McCollum, Louise Russell, and Eva Likova, among others. Mr. Wilhelmsen has made numer?ous radio and television appearances, including live performances and interviews on WQXR in New York, WUOM in Ann Arbor, Group W Cable TV, and frequent appearances on "Kelly and Company" in Detroit. His concerts include appearances at the Musikverein in Vienna; Orchestra Hall, Meadow Brook Music Festival, and Detroit Institute of Arts in Detroit; and at Carnegie Recital Hall in New York City. In addition to his recording activities with Mr. Ricci, Mr. Wilhelmsen has also recorded on Suncoast, KM, and Brothers labels.
This evening's performance is his first for the Musical Society.
Tomorrow Night!
Andres Segovia
Thursday, March 27, at 8:00 p.m., Hill Auditorium Tickets at $16, t13, S10, and $8
St. Paul Chamber Orchestra................................ Tues. Apr. 1
Pinchas Zukeuman, ConductorViolinist
Mozart: Overture to Don Giovanni; Marc Neikrug: Chettro Ketl; Haydn: Symphony No. 102;
Mendelssohn: Violin Concerto in E minor
Watch for new 1986-87 Season Announcement on April 7!
UNIVERSITY MUSICAL SOCIETY
Burton Memorial Tower, Ann Arbor, Michigan 48109-1270 Phones: (313) 665-3717, 764-2538