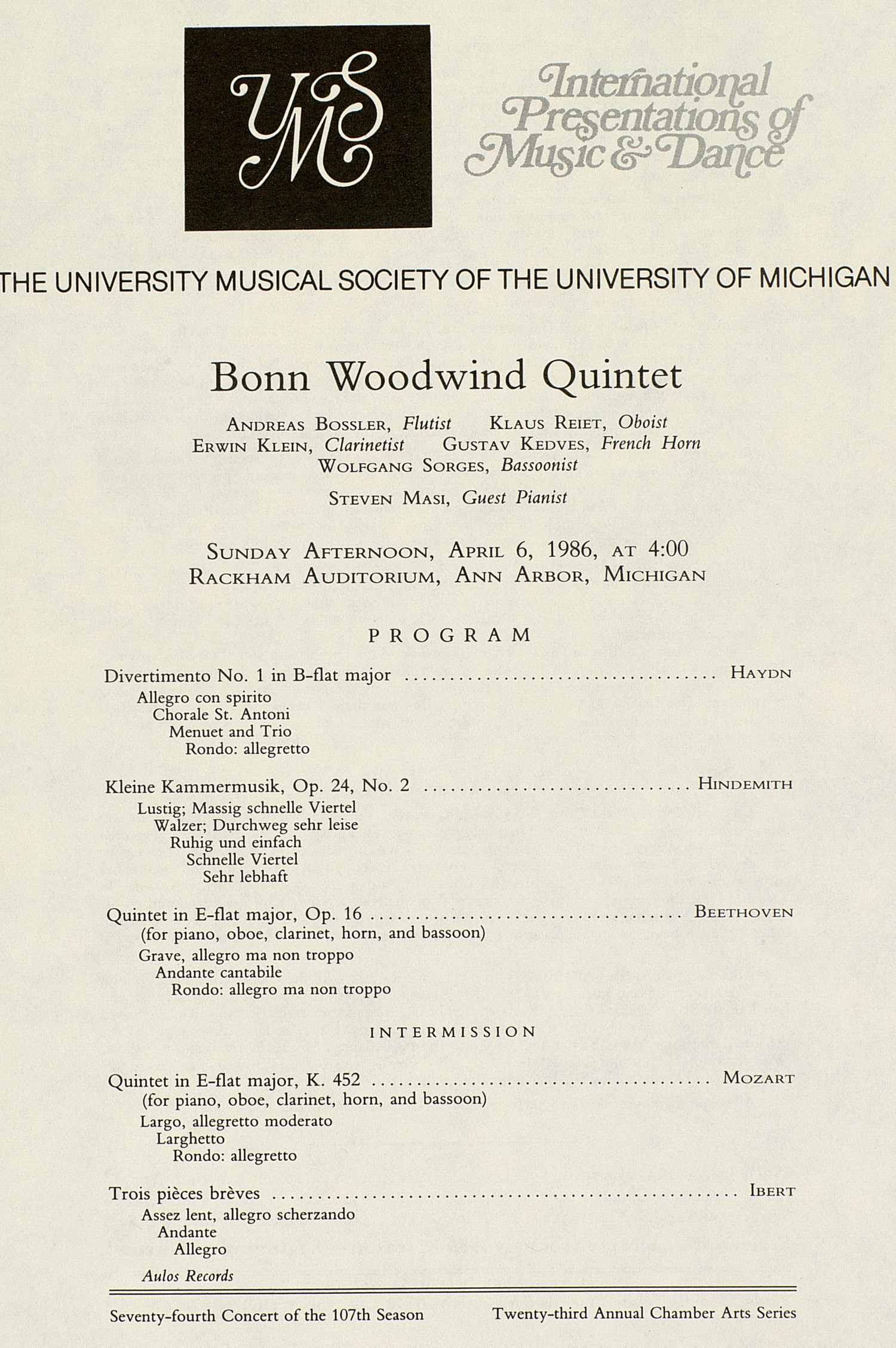 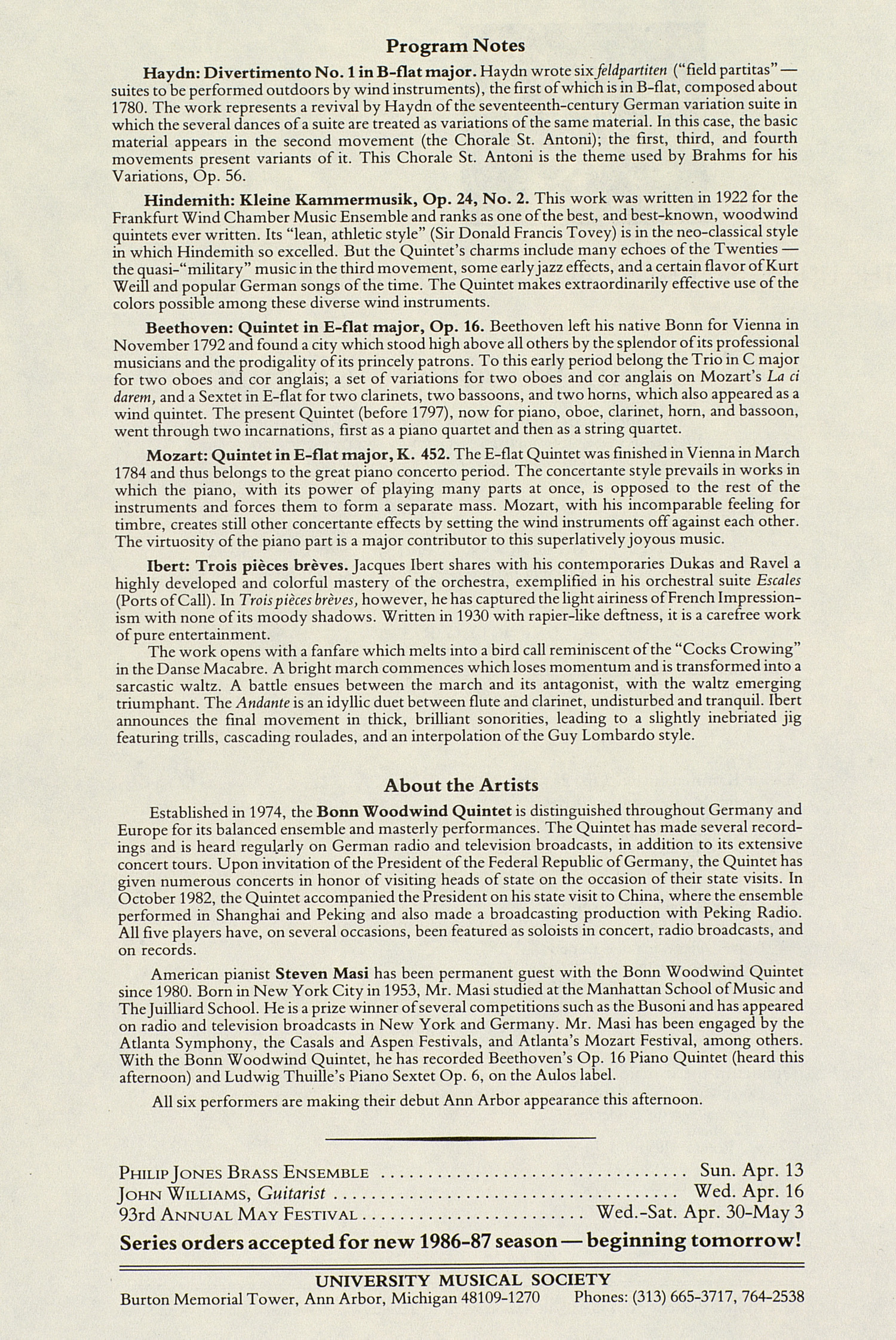 HE UNIVERSITY MUSICAL SOCIETY OF THE UNIVERSITY OF MICHIGAN
Bonn Woodwind Quintet
Andreas Bossler, Flutist Klaus Reiet, Oboist
Erwin Klein, Clarinetist Gustav Kedves, French Horn
Wolfgang Sorges, Bassoonist
Steven Masi, Guest Pianist
Sunday Afternoon, April 6, 1986, at 4:00 Rackham Auditorium, Ann Arbor, Michigan
PROGRAM
Divertimento No. 1 in B-flat major ................................... Haydn
Allegro con spirito Chorale St. Antoni Menuet and Trio Rondo: allegretto
Kleine Kammermusik, Op. 24, No. 2 ..............................Hindemith
Lustig; Massig schnelle Viertel Walzer; Durchweg sehr leise Ruhig und einfach Schnelle Viertel Sehr lebhaft
Quintet in E-flat major, Op. 16................................... Beethoven
(for piano, oboe, clarinet, horn, and bassoon) Grave, allegro ma non troppo Andante cantabile
Rondo: allegro ma non troppo
INTERMISSION
Quintet in E-flat major, K. 452 ...................................... Mozart
(for piano, oboe, clarinet, horn, and bassoon) Largo, allegretto moderato Larghetto
Rondo: allegretto
Trois pieces breves .................................................... Ibert
Assez lent, allegro scherzando Andante Allegro
Atilos Records Seventy-fourth Concert of the 107th Season Twenty-third Annual Chamber Arts Series
Program Notes
Haydn: Divertimento No. 1 in B-flat major. Haydn wrote sixfeldpartilen ("field partitas" -suites to be performed outdoors by wind instruments), the first of which is in B-flat, composed about 1780. The work represents a revival by Haydn of the seventeenth-century German variation suite in which the several dances of a suite are treated as variations of the same material. In this case, the basic material appears in the second movement (the Chorale St. Antoni); the first, third, and fourth movements present variants of it. This Chorale St. Antoni is the theme used by Brahms for his Variations, Op. 56.
Hindemith: Kleine Kammermusik, Op. 24, No. 2. This work was written in 1922 for the Frankfurt Wind Chamber Music Ensemble and ranks as one of the best, and best-known, woodwind quintets ever written. Its "lean, athletic style" (Sir Donald Francis Tovey) is in the neo-classical style in which Hindemith so excelled. But the Quintet's charms include many echoes of the Twenties -the quasi-"military " music in the third movement, some early jazz effects, and a certain flavor of Kurt Weill and popular German songs of the time. The Quintet makes extraordinarily effective use of the colors possible among these diverse wind instruments.
Beethoven: Quintet in E-flat major, Op. 16. Beethoven left his native Bonn for Vienna in November 1792 and found a city which stood high above all others by the splendor of its professional musicians and the prodigality of its princely patrons. To this early period belong the Trio in C major for two oboes and cor anglais; a set of variations for two oboes and cor anglais on Mozart's La ci darem, and a Sextet in E-flat for two clarinets, two bassoons, and two horns, which also appeared as a wind quintet. The present Quintet (before 1797), now for piano, oboe, clarinet, horn, and bassoon, went through two incarnations, first as a piano quartet and then as a string quartet.
Mozart: Quintet in E-flat major, K. 452. The E-flat Quintet was finished in Vienna in March 1784 and thus belongs to the great piano concerto period. The concertante style prevails in works in which the piano, with its power of playing many parts at once, is opposed to the rest of the instruments and forces them to form a separate mass. Mozart, with his incomparable feeling for timbre, creates still other concertante effects by setting the wind instruments off against each other. The virtuosity of the piano part is a major contributor to this superlatively joyous music.
Ibert: Trois pieces breves. Jacques Ibert shares with his contemporaries Dukas and Ravel a highly developed and colorful mastery of the orchestra, exemplified in his orchestral suite Escales (Ports of Call). In Trois pieces breves, however, he has captured the light airiness of French Impression?ism with none of its moody shadows. Written in 1930 with rapier-like deftness, it is a carefree work of pure entertainment.
The work opens with a fanfare which melts into a bird call reminiscent of the "Cocks Crowing" in the Danse Macabre. A bright march commences which loses momentum and is transformed into a sarcastic waltz. A battle ensues between the march and its antagonist, with the waltz emerging triumphant. The Andante is an idyllic duet between flute and clarinet, undisturbed and tranquil. Ibert announces the final movement in thick, brilliant sonorities, leading to a slightly inebriated jig featuring trills, cascading roulades, and an interpolation of the Guy Lombardo style.
About the Artists
Established in 1974, the Bonn Woodwind Quintet is distinguished throughout Germany and Europe for its balanced ensemble and masterly performances. The Quintet has made several record?ings and is heard regularly on German radio and television broadcasts, in addition to its extensive concert tours. Upon invitation of the President of the Federal Republic of Germany, the Quintet has given numerous concerts in honor of visiting heads of state on the occasion of their state visits. In October 1982, the Quintet accompanied the President on his state visit to China, where the ensemble performed in Shanghai and Peking and also made a broadcasting production with Peking Radio. All five players have, on several occasions, been featured as soloists in concert, radio broadcasts, and on records.
American pianist Steven Masi has been permanent guest with the Bonn Woodwind Quintet since 1980. Born in New York City in 1953, Mr. Masi studied at the Manhattan School of Music and Thejuilliard School. He is a prize winner of several competitions such as the Busoni and has appeared on radio and television broadcasts in New York and Germany. Mr. Masi has been engaged by the Atlanta Symphony, the Casals and Aspen Festivals, and Atlanta's Mozart Festival, among others. With the Bonn Woodwind Quintet, he has recorded Beethoven's Op. 16 Piano Quintet (heard this afternoon) and Ludwig Thuille's Piano Sextet Op. 6, on the Aulos label.
All six performers are making their debut Ann Arbor appearance this afternoon.
Philip Jones Brass Ensemble ................................. Sun. Apr. 13
John Williams, Guitarist..................................... Wed. Apr. 16
93rd Annual May Festival........................ Wed.-Sat. Apr. 30-May 3
Series orders accepted for new 1986-87 season -beginning tomorrow!
UNIVERSITY MUSICAL SOCIETY
Burton Memorial Tower, Ann Arbor, Michigan 48109-1270 Phones: (313) 665-3717, 764-2538