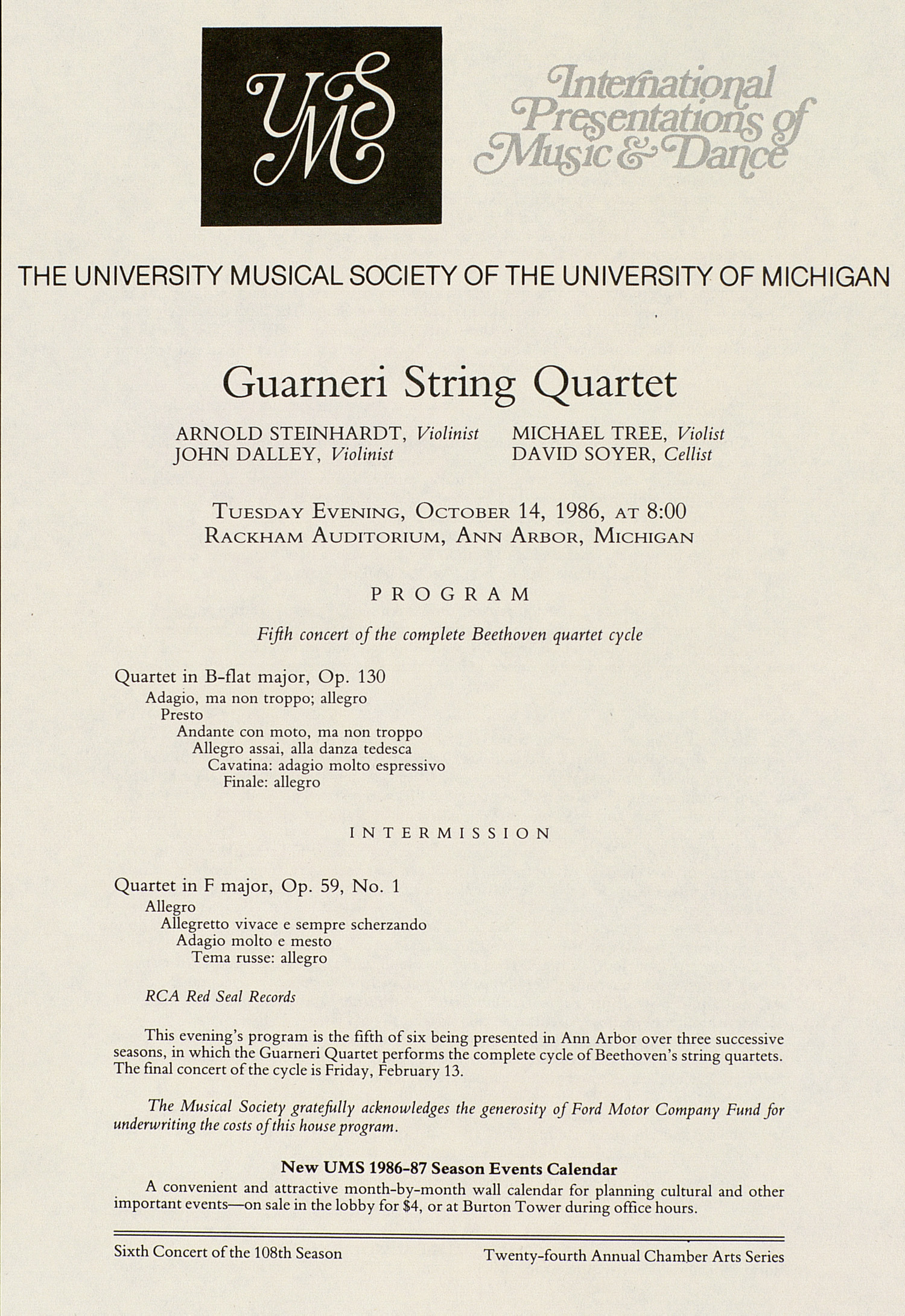 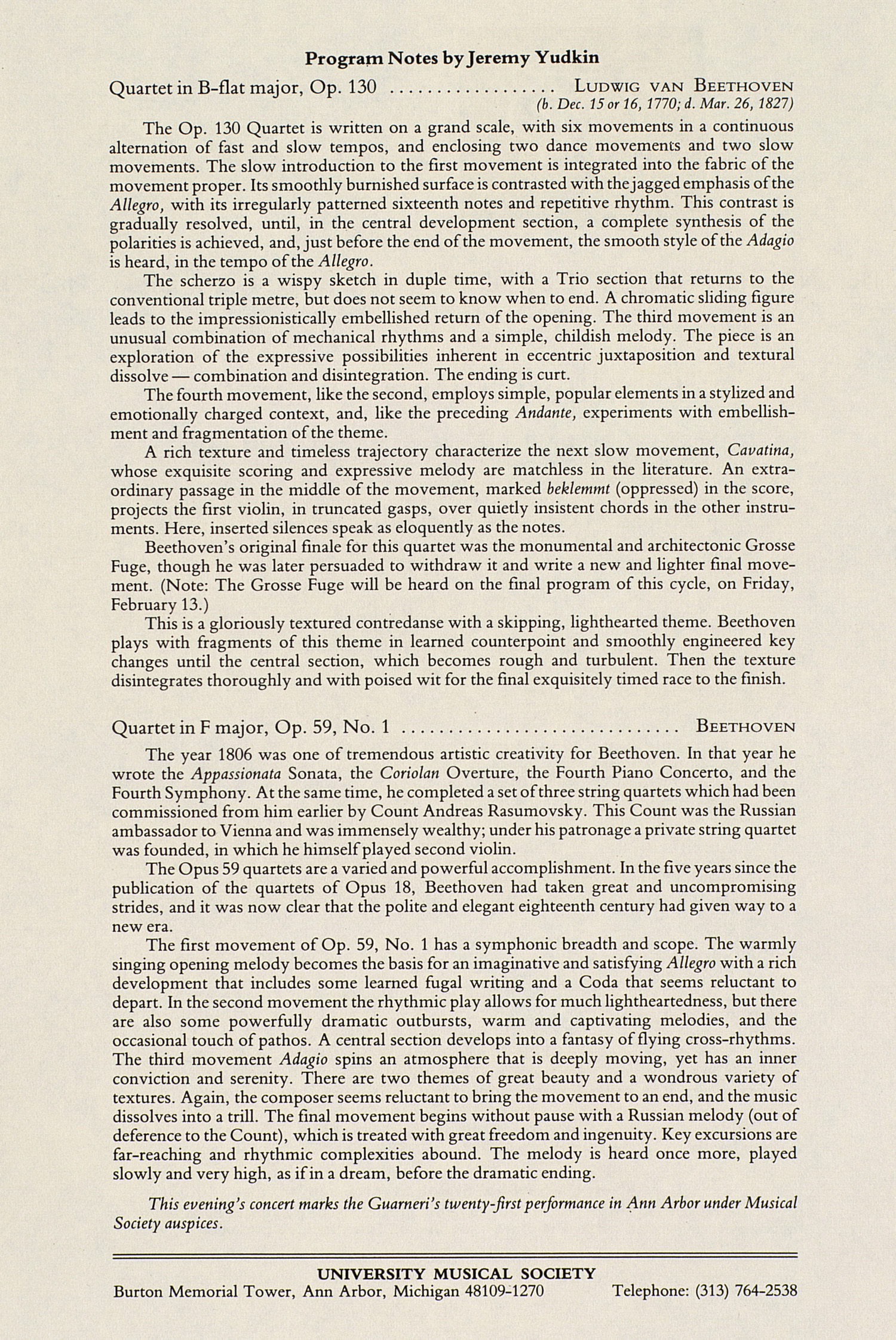 Jntethatioil
THE UNIVERSITY MUSICAL SOCIETY OF THE UNIVERSITY OF MICHIGAN
Guarneri String Quartet
ARNOLD STEINHARDT, Violinist MICHAEL TREE, Violist JOHN DALLEY, Violinist DAVID SOYER, Cellist
Tuesday Evening, October 14, 1986, at 8:00 Rackham Auditorium, Ann Arbor, Michigan
PROGRAM
Fijih concert of the complete Beethoven quartet cycle
Quartet in B-flat major, Op. 130 Adagio, ma non troppo; allegro Presto
Andante con moto, ma non troppo Allegro assai, alia danza tedesca Cavatina: adagio molto espressivo Finale: allegro
INTERMISSION
Quartet in F major, Op. 59, No. 1 Allegro
Allegretto vivace e sempre scherzando Adagio molto e mesto Tema russe: allegro
RCA Red Seal Records
This evening's program is the fifth of six being presented in Ann Arbor over three successive seasons, in which the Guarneri Quartet performs the complete cycle of Beethoven's string quartets. The final concert of the cycle is Friday, February 13.
The Musical Society gratejully acknowledges the generosity of Ford Motor Company Fund for underwriting the costs of this house program.
New UMS 1986-87 Season Events Calendar
A convenient and attractive month-by-month wall calendar for planning cultural and other important events--on sale in the lobby for $4, or at Burton Tower during office hours.
Sixth Concert of the 108th Season Twenty-fourth Annual Chamber Arts Series
Program Notes by Jeremy Yudkin
Quartet in B-flat major, Op. 130 .................. Ludwig van Beethoven
(b. Dec. 15 or 16, 1110; d. Mar. 26, 1821)
The Op. 130 Quartet is written on a grand scale, with six movements in a continuous alternation of fast and slow tempos, and enclosing two dance movements and two slow movements. The slow introduction to the first movement is integrated into the fabric of the movement proper. Its smoothly burnished surface is contrasted with the jagged emphasis of the Allegro, with its irregularly patterned sixteenth notes and repetitive rhythm. This contrast is gradually resolved, until, in the central development section, a complete synthesis of the polarities is achieved, and, just before the end of the movement, the smooth style of the Adagio is heard, in the tempo of the Allegro.
The scherzo is a wispy sketch in duple time, with a Trio section that returns to the conventional triple metre, but does not seem to know when to end. A chromatic sliding figure leads to the impressionistically embellished return of the opening. The third movement is an unusual combination of mechanical rhythms and a simple, childish melody. The piece is an exploration of the expressive possibilities inherent in eccentric juxtaposition and textural dissolve -combination and disintegration. The ending is curt.
The fourth movement, like the second, employs simple, popular elements in a stylized and emotionally charged context, and, like the preceding Andante, experiments with embellish?ment and fragmentation of the theme.
A rich texture and timeless trajectory characterize the next slow movement, Cavatina, whose exquisite scoring and expressive melody are matchless in the literature. An extra?ordinary passage in the middle of the movement, marked beklemmt (oppressed) in the score, projects the first violin, in truncated gasps, over quietly insistent chords in the other instru?ments. Here, inserted silences speak as eloquently as the notes.
Beethoven's original finale for this quartet was the monumental and architectonic Grosse Fuge, though he was later persuaded to withdraw it and write a new and lighter final move?ment. (Note: The Grosse Fuge will be heard on the final program of this cycle, on Friday, February 13.)
This is a gloriously textured contredanse with a skipping, lighthearted theme. Beethoven plays with fragments of this theme in learned counterpoint and smoothly engineered key changes until the central section, which becomes rough and turbulent. Then the texture disintegrates thoroughly and with poised wit for the final exquisitely timed race to the finish.
Quartet in F major, Op. 59, No. 1 .............................. Beethoven
The year 1806 was one of tremendous artistic creativity for Beethoven. In that year he wrote the Appassionato Sonata, the Coriolan Overture, the Fourth Piano Concerto, and the Fourth Symphony. At the same time, he completed a set of three string quartets which had been commissioned from him earlier by Count Andreas Rasumovsky. This Count was the Russian ambassador to Vienna and was immensely wealthy; under his patronage a private string quartet was founded, in which he himself played second violin.
The Opus 59 quartets are a varied and powerful accomplishment. In the five years since the publication of the quartets of Opus 18, Beethoven had taken great and uncompromising strides, and it was now clear that the polite and elegant eighteenth century had given way to a new era.
The first movement of Op. 59, No. 1 has a symphonic breadth and scope. The warmly singing opening melody becomes the basis for an imaginative and satisfying Allegro with a rich development that includes some learned fugal writing and a Coda that seems reluctant to depart. In the second movement the rhythmic play allows for much lightheartedness, but there are also some powerfully dramatic outbursts, warm and captivating melodies, and the occasional touch of pathos. A central section develops into a fantasy of flying cross-rhythms. The third movement Adagio spins an atmosphere that is deeply moving, yet has an inner conviction and serenity. There are two themes of great beauty and a wondrous variety of textures. Again, the composer seems reluctant to bring the movement to an end, and the music dissolves into a trill. The final movement begins without pause with a Russian melody (out of deference to the Count), which is treated with great freedom and ingenuity. Key excursions are far-reaching and rhythmic complexities abound. The melody is heard once more, played slowly and very high, as if in a dream, before the dramatic ending.
This evening's concert marks the Guarneri's twenty-first performance in Ann Arbor under Musical Society auspices.
UNIVERSITY MUSICAL SOCIETY
Burton Memorial Tower, Ann Arbor, Michigan 48109-1270 Telephone: (313) 764-2538