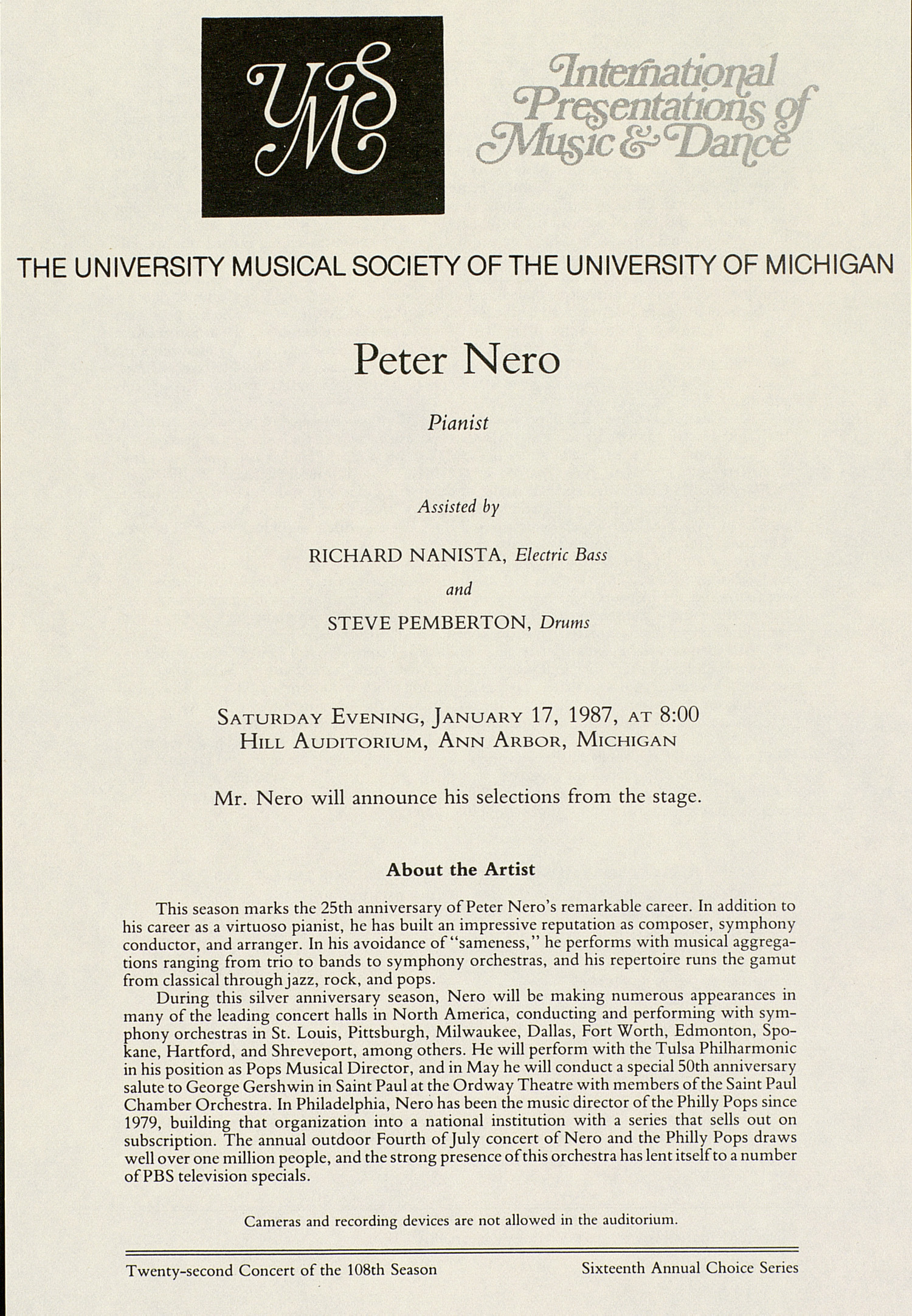 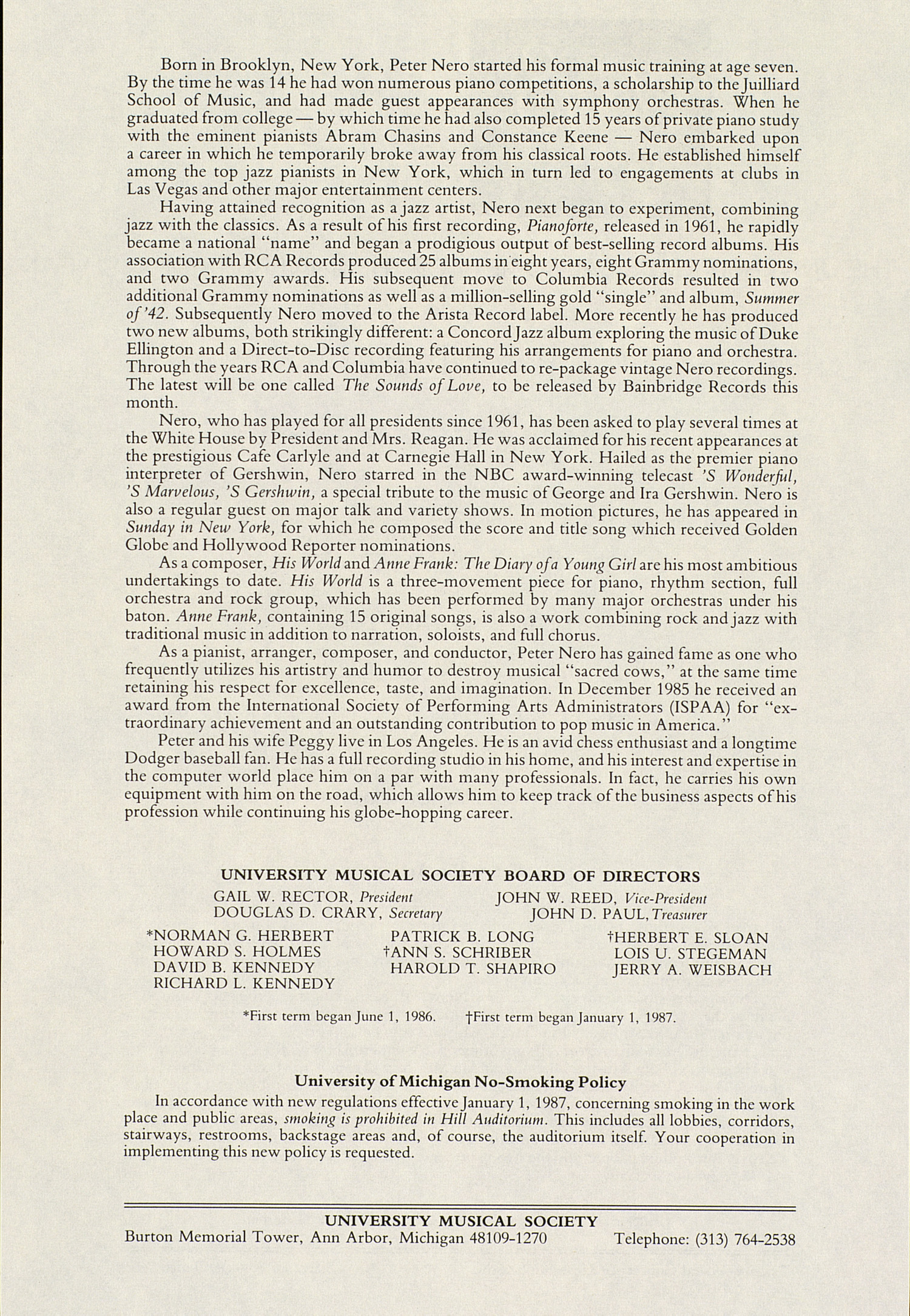 3ntenhational
THE UNIVERSITY MUSICAL SOCIETY OF THE UNIVERSITY OF MICHIGAN
Peter Nero
Pianist
Assisted by
RICHARD NANISTA, Electric Bass
and STEVE PEMBERTON, Drums
Saturday Evening, January 17, 1987, at 8:00 Hill Auditorium, Ann Arbor, Michigan
Mr. Nero will announce his selections from the stage.
About the Artist
This season marks the 25th anniversary of Peter Nero's remarkable career. In addition to his career as a virtuoso pianist, he has built an impressive reputation as composer, symphony conductor, and arranger. In his avoidance of "sameness," he performs with musical aggrega?tions ranging from trio to bands to symphony orchestras, and his repertoire runs the gamut from classical through jazz, rock, and pops.
During this silver anniversary season, Nero will be making numerous appearances in many of the leading concert halls in North America, conducting and performing with sym?phony orchestras in St. Louis, Pittsburgh, Milwaukee, Dallas, Fort Worth, Edmonton, Spo?kane, Hartford, and Shrcvcport, among others. He will perform with the Tulsa Philharmonic in his position as Pops Musical Director, and in May he will conduct a special 50th anniversary salute to George Gershwin in Saint Paul at the Ordway Theatre with members of the Saint Paul Chamber Orchestra. In Philadelphia, Nero has been the music director of the Philly Pops since 1979, building that organization into a national institution with a scries that sells out on subscription. The annual outdoor Fourth of July concert of Nero and the Philly Pops draws well over one million people, and the strong presence of this orchestra has lent itself to a number of PBS television specials.
Cameras and recording devices are not allowed in the auditorium. Twenty-second Concert of the 108th Season Sixteenth Annual Choice Series
Born in Brooklyn, New York, Peter Nero started his formal music training at age seven. By the time he was 14 he had won numerous piano competitions, a scholarship to thejuilliard School of Music, and had made guest appearances with symphony orchestras. When he graduated from college -by which time he had also completed 15 years of private piano study with the eminent pianists Abram Chasins and Constance Kcene -Nero embarked upon a career in which he temporarily broke away from his classical roots. He established himself among the top jazz pianists in New York, which in turn led to engagements at clubs in Las Vegas and other major entertainment centers.
Having attained recognition as a jazz artist, Nero next began to experiment, combining jazz with the classics. As a result of his first recording, Pianoforte, released in 1961, he rapidly became a national "name" and began a prodigious output of best-selling record albums. His association with RCA Records produced 25 albums in eight years, eight Grammy nominations, and two Grammy awards. His subsequent move to Columbia Records resulted in two additional Grammy nominations as well as a million-selling gold "single" and album, Summer of'42. Subsequently Nero moved to the Arista Record label. More recently he has produced two new albums, both strikingly different: a Concord Jazz album exploring the music of Duke Ellington and a Direct-to-Disc recording featuring his arrangements for piano and orchestra. Through the years RCA and Columbia have continued to re-package vintage Nero recordings. The latest will be one called The Sounds of Love, to be released by Bainbridgc Records this month.
Nero, who has played for all presidents since 1961, has been asked to play several times at the White House by President and Mrs. Reagan. He was acclaimed for his recent appearances at the prestigious Cafe Carlylc and at Carnegie Hall in New York. Hailed as the premier piano interpreter of Gershwin, Nero starred in the NBC award-winning telecast 'S Wonderful, 'S Marvelous, 'S Gershwin, a special tribute to the music of George and Ira Gershwin. Nero is also a regular guest on major talk and variety shows. In motion pictures, he has appeared in Sunday in New York, for which he composed the score and title song which received Golden Globe and Hollywood Reporter nominations.
As a composer, His World and Anne Frank: The Diary of a Young Girl arc his most ambitious undertakings to date. His World is a three-movement piece for piano, rhythm section, full orchestra and rock group, which has been performed by many major orchestras under his baton. Anne Frank, containing 15 original songs, is also a work combining rock and jazz with traditional music in addition to narration, soloists, and full chorus.
As a pianist, arranger, composer, and conductor, Peter Nero has gained fame as one who frequently utilizes his artistry and humor to destroy musical "sacred cows," at the same time retaining his respect for excellence, taste, and imagination. In December 1985 he received an award from the International Society of Performing Arts Administrators (ISPAA) for "ex?traordinary achievement and an outstanding contribution to pop music in America."
Peter and his wife Peggy live in Los Angeles. He is an avid chess enthusiast and a longtime Dodger baseball fan. He has a full recording studio in his home, and his interest and expertise in the computer world place him on a par with many professionals. In fact, he carries his own equipment with him on the road, which allows him to keep track of the business aspects of his profession while continuing his globe-hopping career.
UNIVERSITY MUSICAL SOCIETY BOARD OF DIRECTORS
GAIL W. RECTOR, President DOUGLAS D. CRARY, Secretary
JOHN W. REED, Vke-Presidem JOHN D. PAUL, Treasurer
NORMAN G. HERBERT HOWARD S. HOLMES DAVID B. KENNEDY RICHARD L. KENNEDY
PATRICK B. LONG tANN S. SCHRIBER HAROLD T. SHAPIRO
tHERBERT E. SLOAN LOIS U. STEGEMAN JERRY A. WEISBACH
First term began June 1, 1986.
"f First term began January 1, 1987.
University of Michigan No-Smoking Policy
In accordance with new regulations effective January 1, 1987, concerning smoking in the work place and public areas, smoking is prohibited in Hill Auditorium. This includes all lobbies, corridors, stairways, restrooms, backstage areas and, of course, the auditorium itself. Your cooperation in implementing this new policy is requested.
UNIVERSITY MUSICAL SOCIETY
Burton Memorial Tower, Ann Arbor, Michigan 48109-1270 Telephone: (313) 764-2538