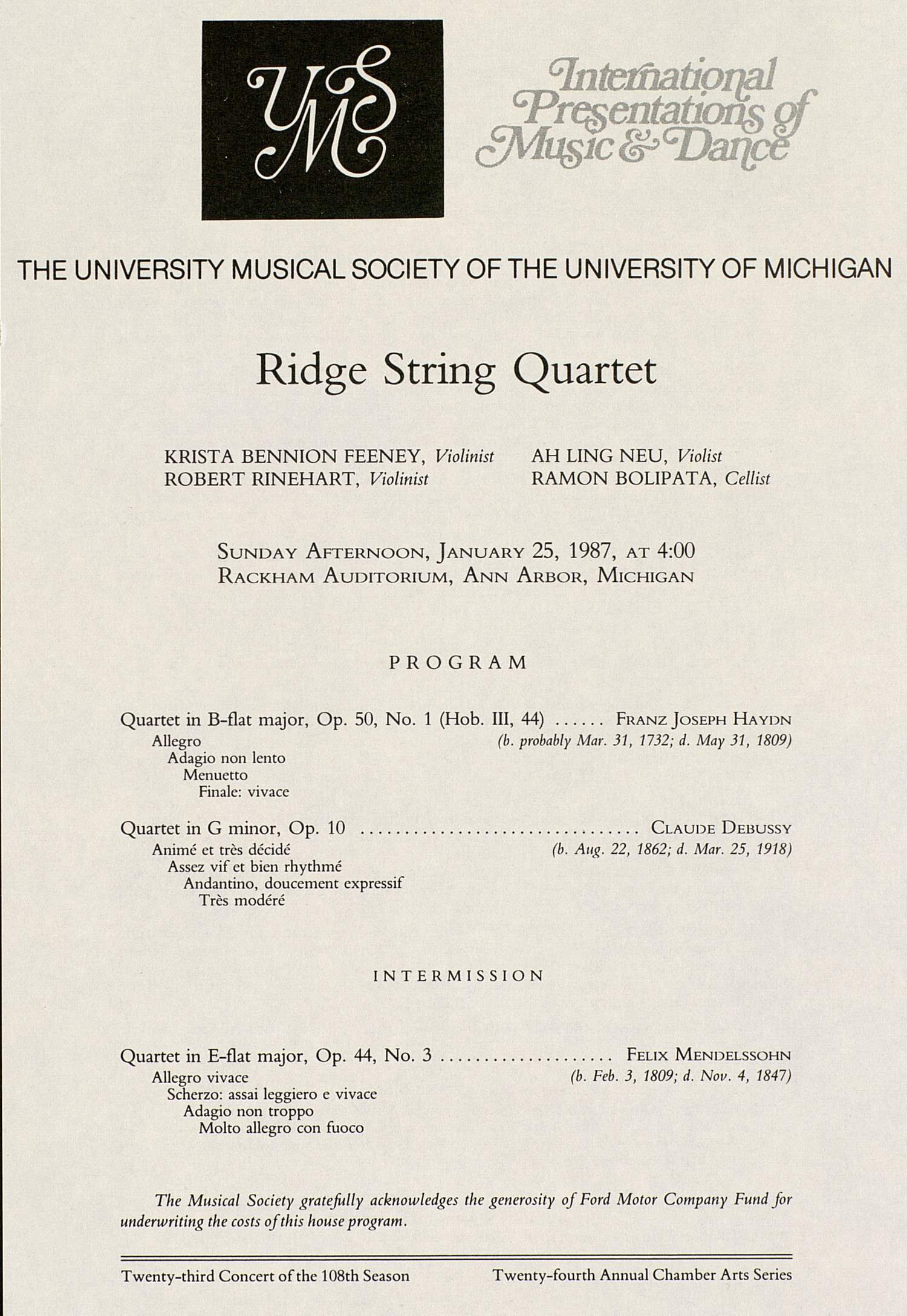 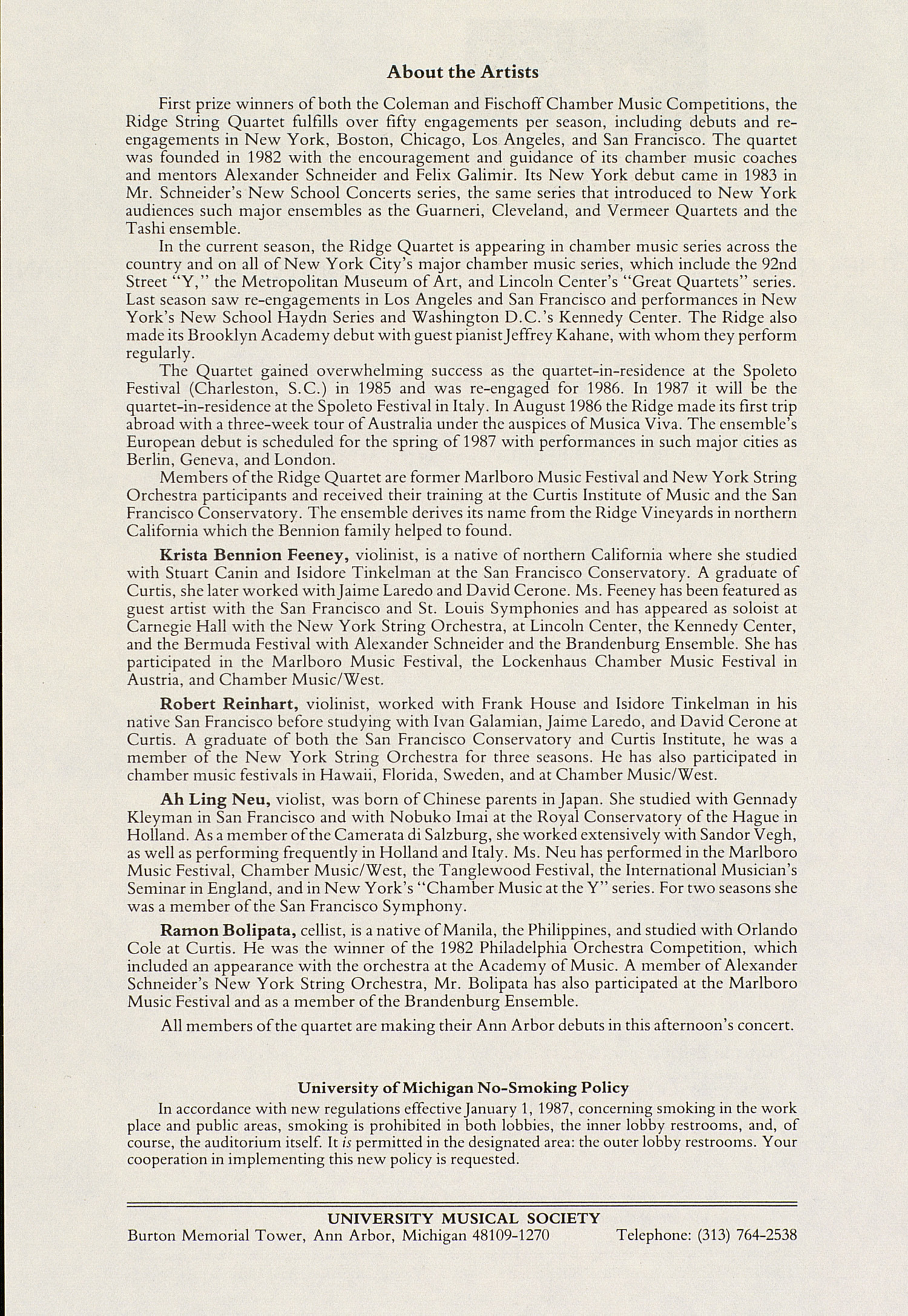 THE UNIVERSITY MUSICAL SOCIETY OF THE UNIVERSITY OF MICHIGAN
Ridge String Quartet
KRISTA BENNION FEENEY, Violinist AH LING NEU, Violist ROBERT RINEHART, Violinist RAMON BOLIPATA, Cellist
Sunday Afternoon, January 25, 1987, at 4:00 Rackham Auditorium, Ann Arbor, Michigan
PROGRAM
Quartet in B-flat major, Op. 50, No. 1 (Hob. Ill, 44) ...... Franz Joseph Haydn
Allegro (b. probably Mar. 31, 1732; d. May 31, 1809)
Adagio non lento Mcnuetto Finale: vivace
Quartet in G minor, Op. 10 ................................ Claude Debussy
Anime et tres decide (b. Aug. 22, 1862; d. Mar. 25, 1918)
Assez vif et bicn rhythme
Andantino, doucement expressif Tres moderc
INTERMISSION
Quartet in E-flat major, Op. 44, No. 3.................... Felix Mendelssohn
Allegro vivace (b. Feb. 3, 1809; d. Nov. 4, 1847)
Scherzo: assai leggiero e vivace Adagio non troppo Molto allegro con fuoco
The Musical Society gratefully acknowledges the generosity of Ford Motor Company Fund for underwriting the costs of this house program.
Twenty-third Concert of the 108th Season Twenty-fourth Annual Chamber Arts Series
About the Artists
First prize winners of both the Colcman and FischofT Chamber Music Competitions, the Ridge String Quartet fulfills over fifty engagements per season, including debuts and re-engagcments in New York, Boston, Chicago, Los Angeles, and San Francisco. The quartet was founded in 1982 with the encouragement and guidance of its chamber music coaches and mentors Alexander Schneider and Felix Galimir. Its New York debut came in 1983 in Mr. Schneider's New School Concerts scries, the same scries that introduced to New York audiences such major ensembles as the Guarneri, Cleveland, and Vermeer Quartets and the Tashi ensemble.
In the current season, the Ridge Quartet is appearing in chamber music series across the country and on all of New York City's major chamber music scries, which include the 92nd Street "Y," the Metropolitan Museum of Art, and Lincoln Center's "Great Quartets" series. Last season saw re-engagements in Los Angeles and San Francisco and performances in New York's New School Haydn Series and Washington D.C.'s Kennedy Center. The Ridge also made its Brooklyn Academy debut with guest pianistjeffrey Kahane, with whom they perform regularly.
The Quartet gained overwhelming success as the quartct-in-residcncc at the Spoleto Festival (Charleston, S.C.) in 1985 and was re-engaged for 1986. In 1987 it will be the quartet-in-residence at the Spoleto Festival in Italy. In August 1986 the Ridge made its first trip abroad with a three-week tour of Australia under the auspices of Musica Viva. The ensemble's European debut is scheduled for the spring of 1987 with performances in such major cities as Berlin, Geneva, and London.
Members of the Ridge Quartet are former Marlboro Music Festival and New York String Orchestra participants and received their training at the Curtis Institute of Music and the San Francisco Conservatory. The ensemble derives its name from the Ridge Vineyards in northern California which the Bennion family helped to found.
Krista Bennion Feeney, violinist, is a native of northern California where she studied with Stuart Canin and Isidore Tinkelman at the San Francisco Conservatory. A graduate of Curtis, she later worked with Jaime Laredo and David Ccrone. Ms. Feeney has been featured as guest artist with the San Francisco and St. Louis Symphonies and has appeared as soloist at Carnegie Hall with the New York String Orchestra, at Lincoln Center, the Kennedy Center, and the Bermuda Festival with Alexander Schneider and the Brandenburg Ensemble. She has participated in the Marlboro Music Festival, the Lockenhaus Chamber Music Festival in Austria, and Chamber MusicWest.
Robert Reinhart, violinist, worked with Frank House and Isidore Tinkelman in his native San Francisco before studying with Ivan Galamian, Jaime Laredo, and David Ccrone at Curtis. A graduate of both the San Francisco Conservatory and Curtis Institute, he was a member of the New York String Orchestra for three seasons. He has also participated in chamber music festivals in Hawaii, Florida, Sweden, and at Chamber MusicWest.
Ah Ling Neu, violist, was born of Chinese parents in Japan. She studied with Gennady Kleyman in San Francisco and with Nobuko Imai at the Royal Conservatory of the Hague in Holland. As a member of the Camera ta di Salzburg, she worked extensively with Sandor Vegh, as well as performing frequently in Holland and Italy. Ms. Neu has performed in the Marlboro Music Festival, Chamber MusicWest, the Tanglewood Festival, the International Musician's Seminar in England, and in New York's "Chamber Music at the Y" scries. For two seasons she was a member of the San Francisco Symphony.
Ramon Bolipata, cellist, is a native of Manila, the Philippines, and studied with Orlando Cole at Curtis. He was the winner of the 1982 Philadelphia Orchestra Competition, which included an appearance with the orchestra at the Academy of Music. A member of Alexander Schneider's New York String Orchestra, Mr. Bolipata has also participated at the Marlboro Music Festival and as a member of the Brandenburg Ensemble.
All members of the quartet are making their Ann Arbor debuts in this afternoon's concert.
University of Michigan No-Smoking Policy
In accordance with new regulations effective January 1, 1987, concerning smoking in the work place and public areas, smoking is prohibited in both lobbies, the inner lobby restrooms, and, of course, the auditorium itself. It is permitted in the designated area: the outer lobby restrooms. Your cooperation in implementing this new policy is requested.
UNIVERSITY MUSICAL SOCIETY
Burton Memorial Tower, Ann Arbor, Michigan 48109-1270 Telephone: (313) 764-2538