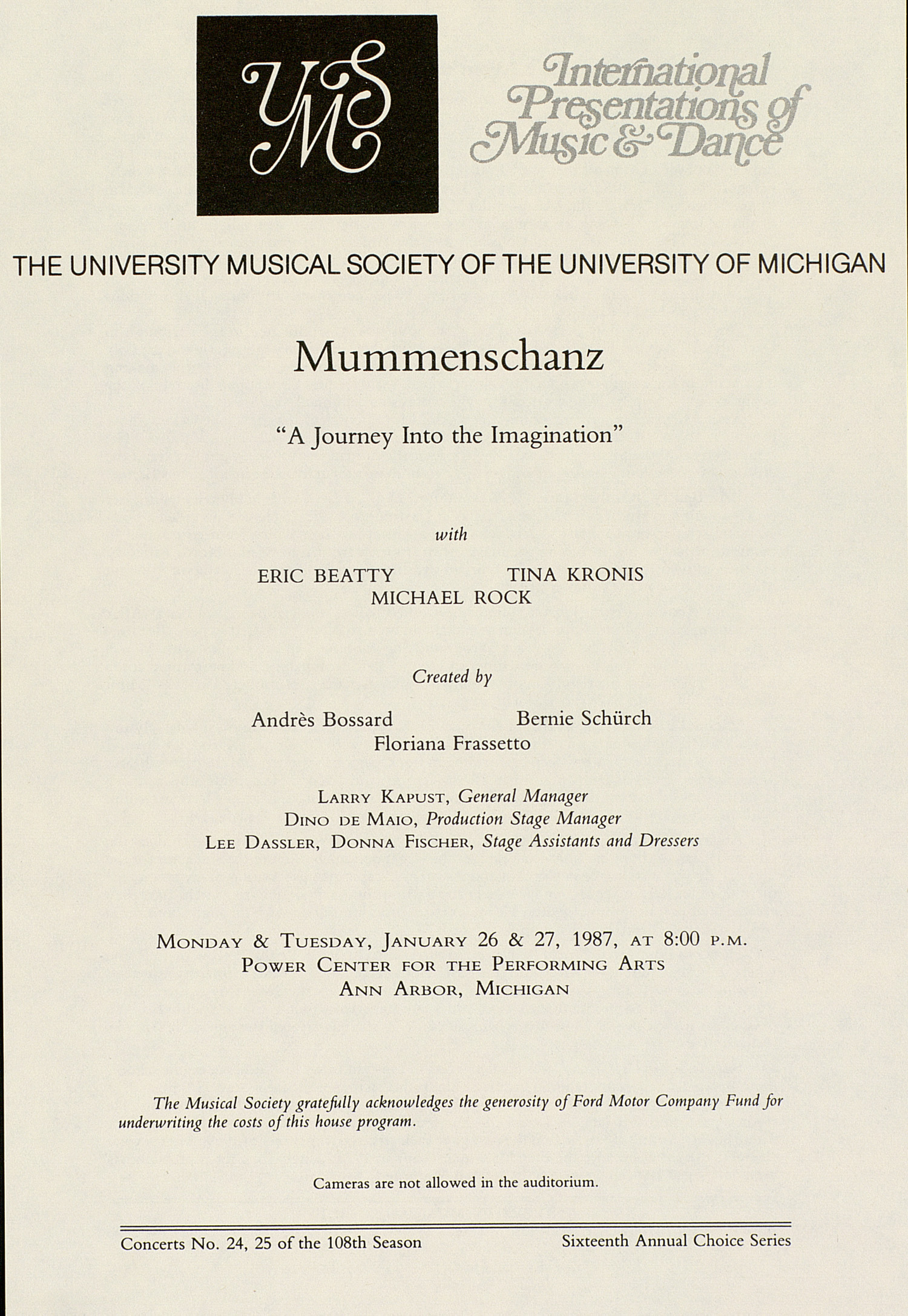 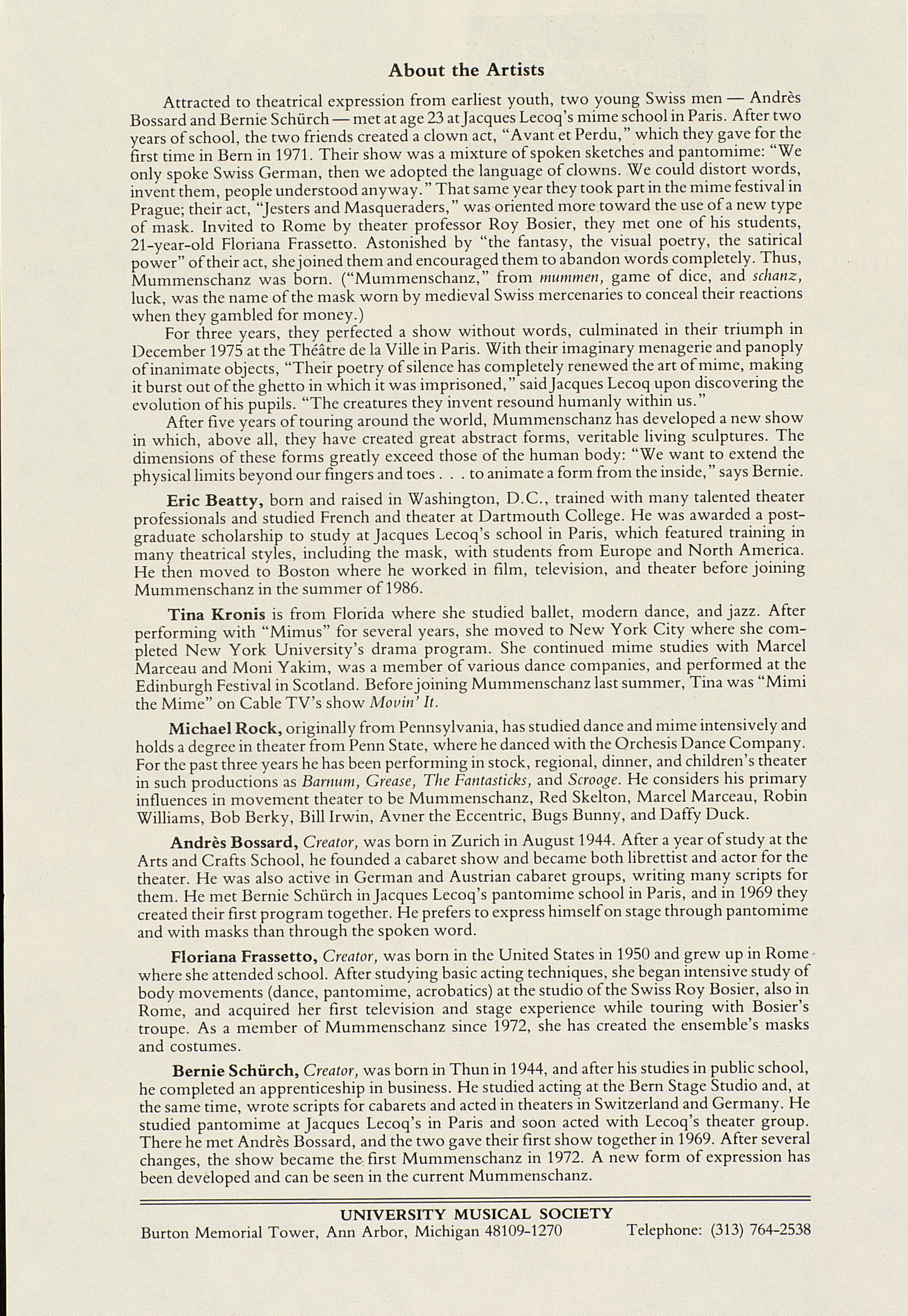 itetfjatipnal resentations
THE UNIVERSITY MUSICAL SOCIETY OF THE UNIVERSITY OF MICHIGAN
Mummenschanz
"A Journey Into the Imagination"
with
ERIC BEATTY TINA KRONIS
MICHAEL ROCK
Created by
Andres Bossard Bernie Schurch
Floriana Frassetto
Larry Kapust, General Manager
Dino de Maio, Production Stage Manager
Lee Dassler, Donna Fischer, Stage Assistants and Dressers
Monday & Tuesday, January 26 & 27, 1987, at 8:00 p.m.
Power Center for the Performing Arts
Ann Arbor, Michigan
The Musical Society gratefiilly acknowledges the generosity of Ford Motor Company Fund for underwriting the costs of this house program.
Cameras arc not allowed in the auditorium.
Concerts No. 24, 25 of the 108th Season Sixteenth Annual Choice Series
About the Artists
Attracted to theatrical expression from earliest youth, two young Swiss men -Andres Bossard and Bernie Schiirch -met at age 23 at Jacques Lecoq's mime school in Paris. After two years of school, the two friends created a clown act, "Avant et Perdu," which they gave for the first time in Bern in 1971. Their show was a mixture of spoken sketches and pantomime: "We only spoke Swiss German, then we adopted the language of clowns. We could distort words, invent them, people understood anyway." That same year they took part in the mime festival in Prague; their act, "Jesters and Masqueraders," was oriented more toward the use of a new type of mask. Invited to Rome by theater professor Roy Bosier, they met one of his students, 21-year-old Floriana Frassetto. Astonished by "the fantasy, the visual poetry, the satirical power" of their act, she joined them and encouraged them to abandon words completely. Thus, Mummenschanz was born. ("Mummenschanz," from miimmen, game of dice, and schanz, luck, was the name of the mask worn by medieval Swiss mercenaries to conceal their reactions when they gambled for money.)
For three years, they perfected a show without words, culminated in their triumph in December 1975 at the Theatre de la Ville in Paris. With their imaginary menagerie and panoply of inanimate objects, "Their poetry of silence has completely renewed the art of mime, making it burst out of the ghetto in which it was imprisoned," said Jacques Lecoq upon discovering the evolution of his pupils. "The creatures they invent resound humanly within us."
After five years of touring around the world, Mummenschanz has developed a new show in which, above all, they have created great abstract forms, veritable living sculptures. The dimensions of these forms greatly exceed those of the human body: "We want to extend the physical limits beyond our fingers and toes ... to animate a form from the inside," says Bernie.
Eric Beatty, born and raised in Washington, D.C., trained with many talented theater professionals and studied French and theater at Dartmouth College. He was awarded a post?graduate scholarship to study at Jacques Lecoq's school in Paris, which featured training in many theatrical styles, including the mask, with students from Europe and North America. He then moved to Boston where he worked in film, television, and theater before joining Mummenschanz in the summer of 1986.
Tina Kronis is from Florida where she studied ballet, modern dance, and jazz. After performing with "Mimus" for several years, she moved to New York City where she com?pleted New York University's drama program. She continued mime studies with Marcel Marceau and Moni Yakim, was a member of various dance companies, and performed at the Edinburgh Festival in Scotland. Before joining Mummenschanz last summer, Tina was "Mimi the Mime" on Cable TV's show Movin' It.
Michael Rock, originally from Pennsylvania, has studied dance and mime intensively and holds a degree in theater from Penn State, where he danced with the Orchcsis Dance Company. For the past three years he has been performing in stock, regional, dinner, and children's theater in such productions as Barnum, Grease, The Fantasticks, and Scrooge. He considers his primary influences in movement theater to be Mummenschanz, Red Skelton, Marcel Marceau, Robin Williams, Bob Bcrky, Bill Irwin, Avner the Eccentric, Bugs Bunny, and Daffy Duck.
Andres Bossard, Creator, was born in Zurich in August 1944. After a year of study at the Arts and Crafts School, he founded a cabaret show and became both librettist and actor for the theater. He was also active in German and Austrian cabaret groups, writing many scripts for them. He met Bernie Schiirch in Jacques Lecoq's pantomime school in Paris, and in 1969 they created their first program together. He prefers to express himself on stage through pantomime and with masks than through the spoken word.
Floriana Frassetto, Creator, was born in the United States in 1950 and grew up in Rome where she attended school. After studying basic acting techniques, she began intensive study of body movements (dance, pantomime, acrobatics) at the studio of the Swiss Roy Bosier, also in Rome, and acquired her first television and stage experience while touring with Bosicr's troupe. As a member of Mummenschanz since 1972, she has created the ensemble's masks and costumes.
Bernie Schiirch, Creator, was born in Thun in 1944, and after his studies in public school, he completed an apprenticeship in business. He studied acting at the Bern Stage Studio and, at the same time, wrote scripts for cabarets and acted in theaters in Switzerland and Germany. He studied pantomime at Jacques Lecoq's in Paris and soon acted with Lecoq's theater group. There he met Andres Bossard, and the two gave their first show together in 1969. After several changes, the show became the first Mummenschanz in 1972. A new form of expression has been developed and can be seen in the current Mummenschanz.
UNIVERSITY MUSICAL SOCIETY
Burton Memorial Tower, Ann Arbor, Michigan 48109-1270 Telephone: (313) 764-2538