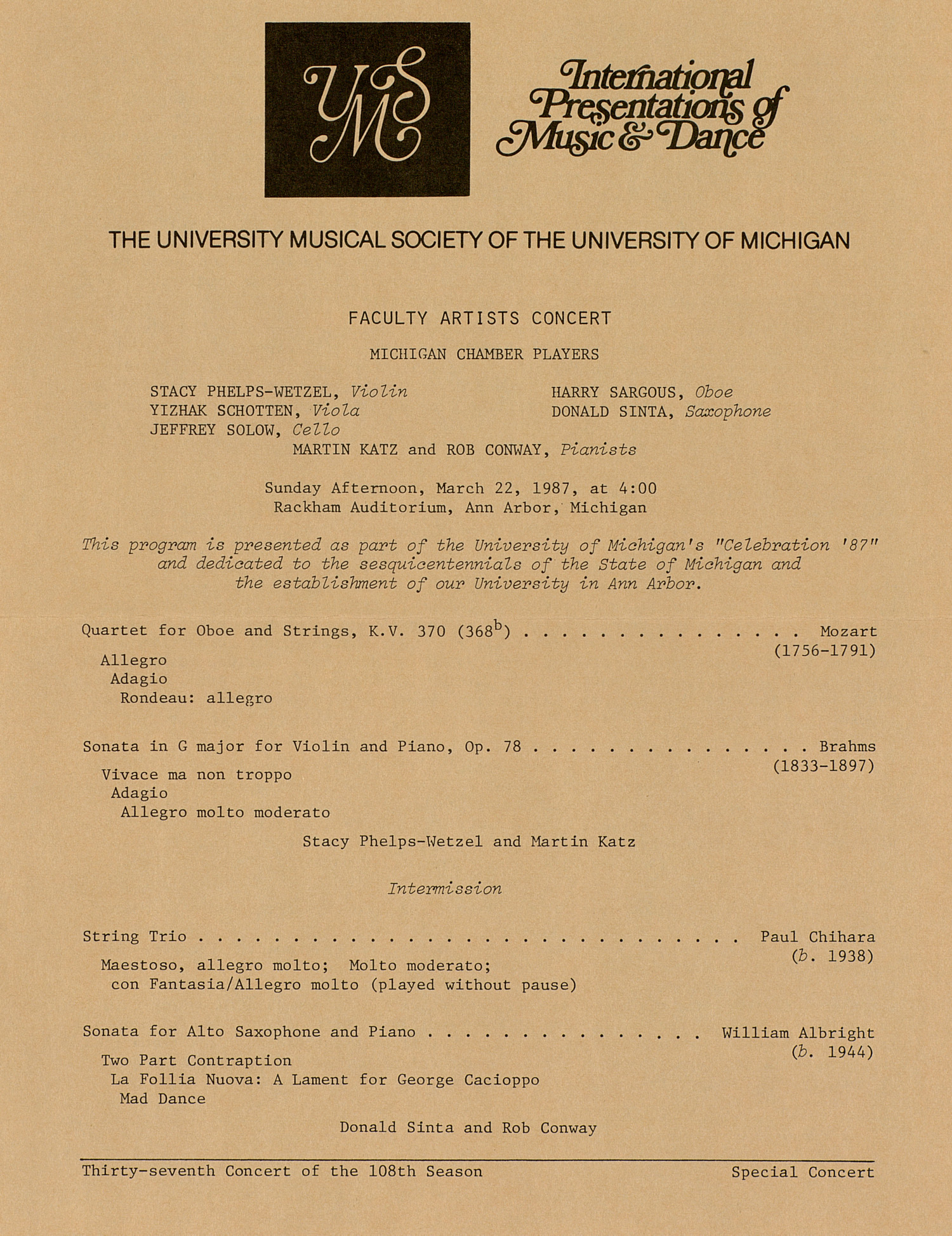 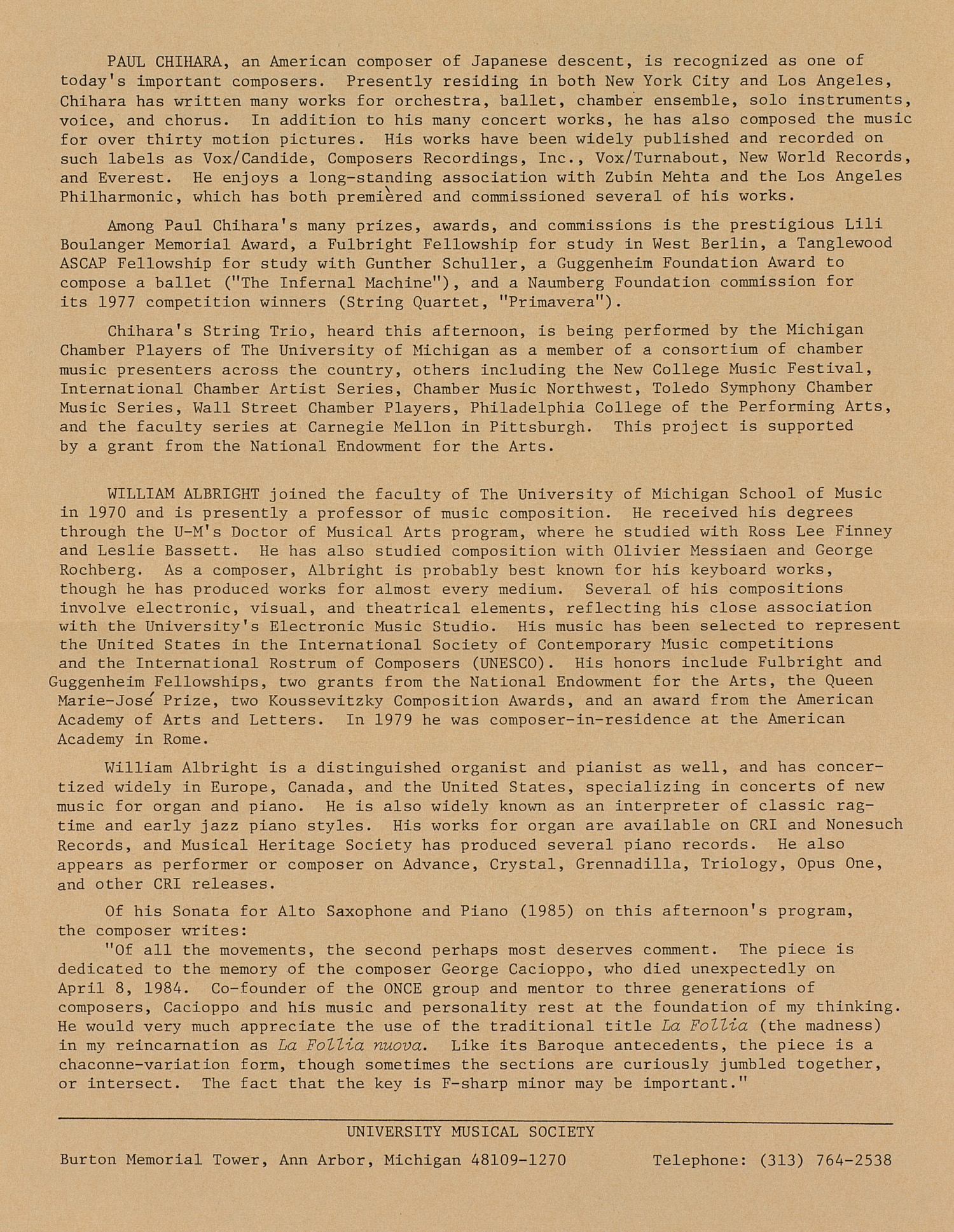 THE UNIVERSITY MUSICAL SOCIETY OF THE UNIVERSITY OF MICHIGAN
FACULTY ARTISTS CONCERT MICHIGAN CHAMBER PLAYERS
STACY PHELPS-WETZEL, Violin HARRY SARGOUS, Oboe
YIZHAK SCHOTTEN, Viola DONALD SINTA, Saxophone
JEFFREY SOLOW, Cello
MARTIN KATZ and ROB CONWAY, Pianists
Sunday Afternoon, March 22, 1987, at 4:00 Rackham Auditorium, Ann Arbor, Michigan
This program is presented as part of the University of Michigan's "Celebration '87" and dedicated to the sesquicentennials of the State of Michigan and the establishment of our University in Ann Arbor.
Quartet for Oboe and Strings, K.V. 370 (368b)...............Mozart
(1756-1791) Allegro
Adagio Rondeau: allegro
Sonata in G major for Violin and Piano, Op. 78...............Brahms
(1833-1897) Vxvace ma non troppo
Adagio Allegro molto moderato
Stacy Phelps-Wetzel and Martin Katz
Intermission
String Trio.............................Paul Chihara
Maestoso, allegro molto; Molto moderato; con FantasiaAllegro molto (played without pause)
Sonata for Alto Saxophone and Piano ............... William Albright
Two Part Contraption
La Follia Nuova: A Lament for George Cacioppo Mad Dance
Donald Sinta and Rob Conway Thirty-seventh Concert of the 108th Season Special Concert
PAUL CHIHARA, an American composer of Japanese descent, is recognized as one of today's important composers. Presently residing in both New York City and Los Angeles, Chihara has written many works for orchestra, ballet, chamber ensemble, solo instruments, voice, and chorus. In addition to his many concert works, he has also composed the music for over thirty motion pictures. His works have been widely published and recorded on such labels as VoxCandide, Composers Recordings, Inc., VoxTurnabout, New World Records, and Everest. He enjoys a long-standing association with Zubin Mehta and the Los Angeles Philharmonic, which has both premiered and commissioned several of his works.
Among Paul Chihara's many prizes, awards, and commissions is the prestigious Lili Boulanger Memorial Award, a Fulbright Fellowship for study in West Berlin, a Tanglewood ASCAP Fellowship for study with Gunther Schuller, a Guggenheim Foundation Award to compose a ballet ("The Infernal Machine"), and a Naumberg Foundation commission for its 1977 competition winners (String Quartet, "Primavera").
Chihara's String Trio, heard this afternoon, is being performed by the Michigan Chamber Players of The University of Michigan as a member of a consortium of chamber music presenters across the country, others including the New College Music Festival, International Chamber Artist Series, Chamber Music Northwest, Toledo Symphony Chamber Music Series, Wall Street Chamber Players, Philadelphia College of the Performing Arts, and the faculty series at Carnegie Mellon in Pittsburgh. This project is supported by a grant from the National Endowment for the Arts.
WILLIAM ALBRIGHT joined the faculty of The University of Michigan School of Music in 1970 and is presently a professor of music composition. He received his degrees through the U-M's Doctor of Musical Arts program, where he studied with Ross Lee Finney and Leslie Bassett. He has also studied composition with Olivier Messiaen and George Rochberg. As a composer, Albright is probably best known for his keyboard works, though he has produced works for almost every medium. Several of his compositions involve electronic, visual, and theatrical elements, reflecting his close association with the University's Electronic Music Studio. His music has been selected to represent the United States in the International Society of Contemporary Music competitions and the International Rostrum of Composers (UNESCO). His honors include Fulbright and Guggenheim Fellowships, two grants from the National Endowment for the Arts, the Queen Marie-Jose' Prize, two Koussevitzky Composition Awards, and an award from the American Academy of Arts and Letters. In 1979 he was composer-in-residence at the American Academy in Rome.
William Albright is a distinguished organist and pianist as well, and has concer-tized widely in Europe, Canada, and the United States, specializing in concerts of new music for organ and piano. He is also widely known as an interpreter of classic rag?time and early jazz piano styles. His works for organ are available on CRI and Nonesuch Records, and Musical Heritage Society has produced several piano records. He also appears as performer or composer on Advance, Crystal, Grennadilla, Triology, Opus One, and other CRI releases.
Of his Sonata for Alto Saxophone and Piano (1985) on this afternoon's program, the composer writes:
"Of all the movements, the second perhaps most deserves comment. The piece is dedicated to the memory of the composer George Cacioppo, who died unexpectedly on April 8, 1984. Co-founder of the ONCE group and mentor to three generations of composers, Cacioppo and his music and personality rest at the foundation of my thinking. He would very much appreciate the use of the traditional title La Fotlia (the madness) in my reincarnation as La Fotlia nuova. Like its Baroque antecedents, the piece is a chaconne-variation form, though sometimes the sections are curiously jumbled together, or intersect. The fact that the key is F-sharp minor may be important."
UNIVERSITY MUSICAL SOCIETY Burton Memorial Tower, Ann Arbor, Michigan 48109-1270 Telephone: (313) 764-2538