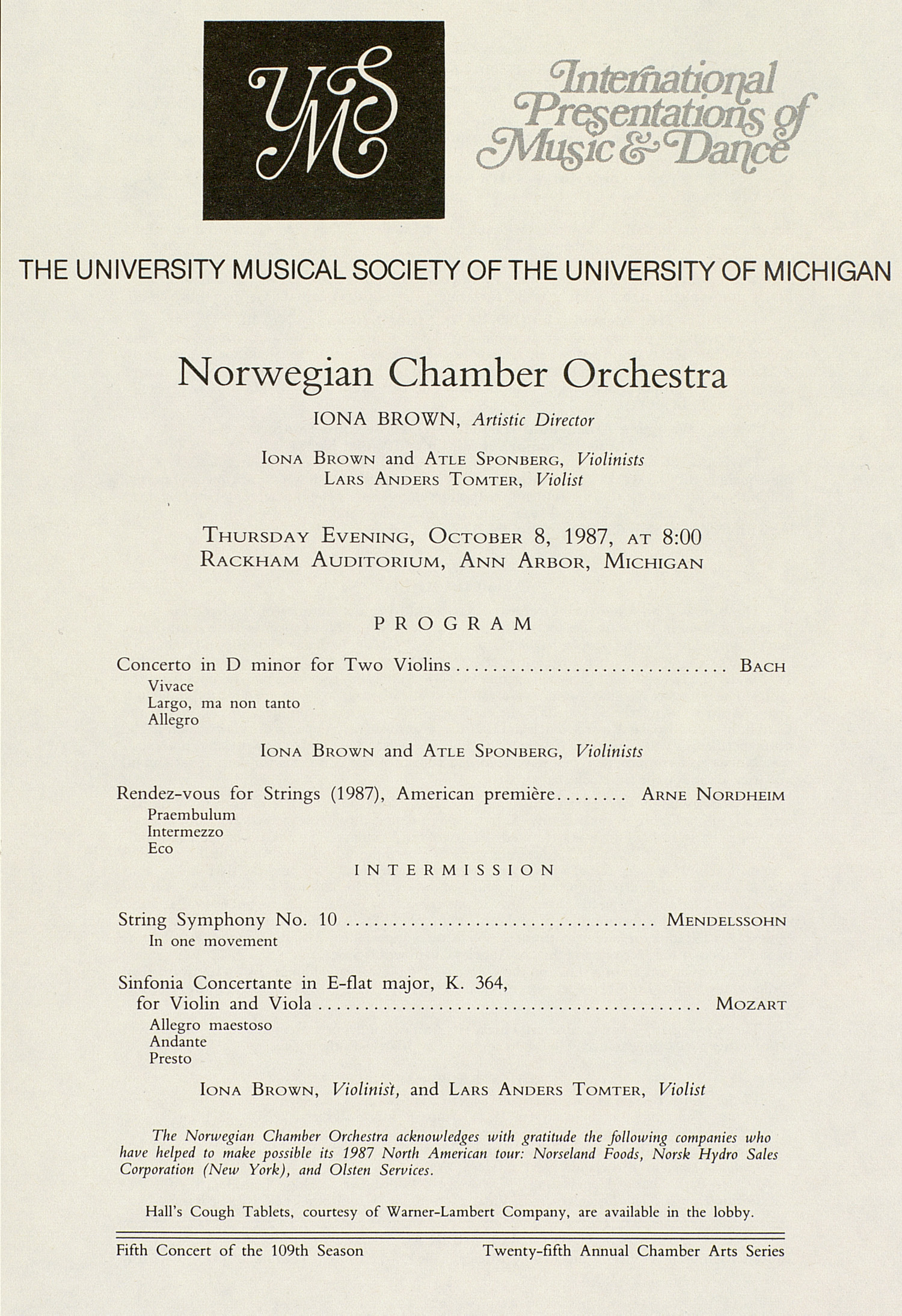 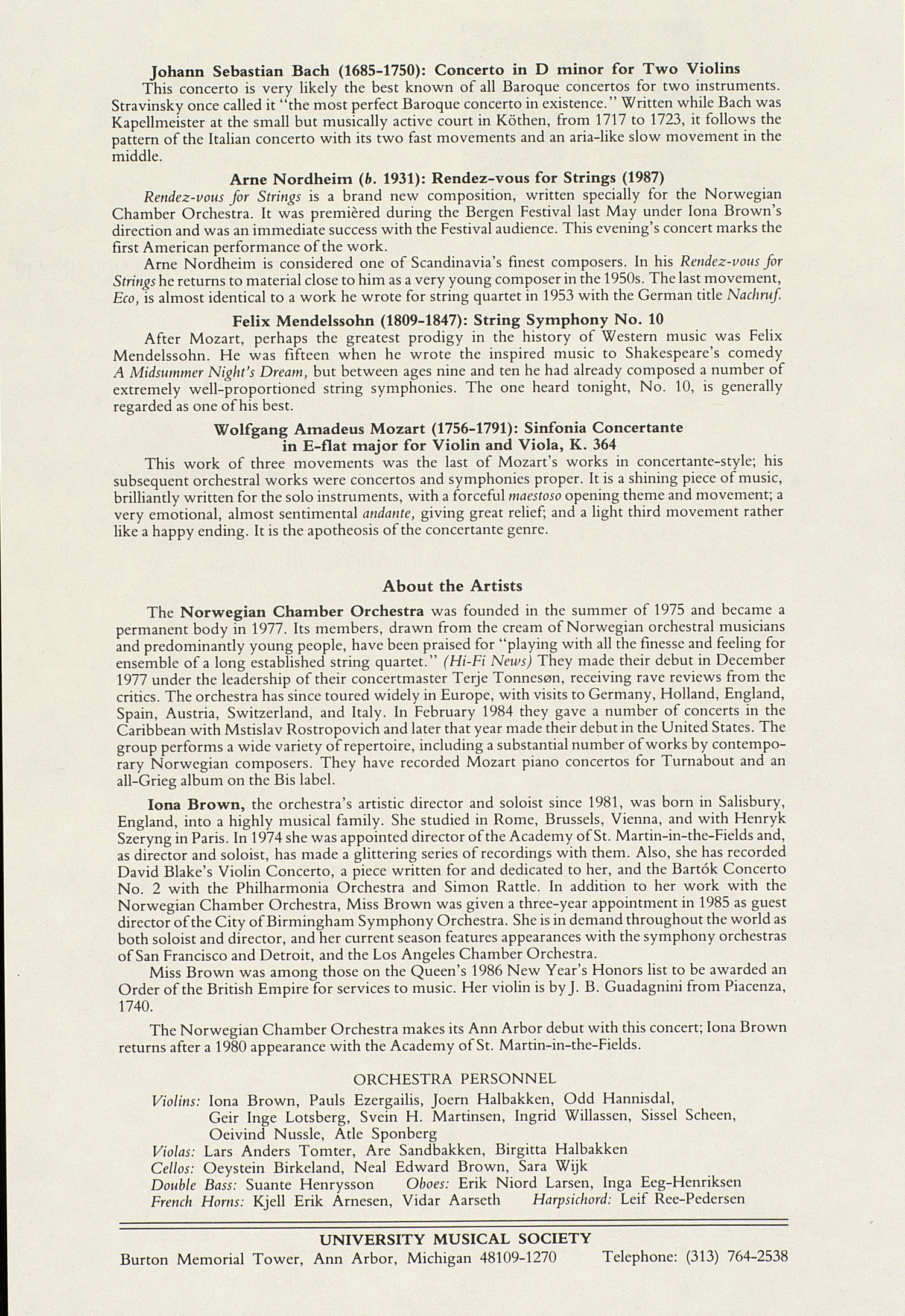 itetfiatipnal
THE UNIVERSITY MUSICAL SOCIETY OF THE UNIVERSITY OF MICHIGAN
Norwegian Chamber Orchestra
IONA BROWN, Artistic Director
Iona Brown and Atle Sponberg, Violinists Lars Anders Tomter, Violist
Thursday Evening, October 8, 1987, at 8:00 Rackham Auditorium, Ann Arbor, Michigan
PROGRAM
Concerto in D minor for Two Violins.............................. Bach
Vivace
Largo, ma non tanto
Allegro
Iona Brown and Atle Sponberg, Violinists
Rendez-vous for Strings (1987), American premiere........ Arne Nordheim
Praembulum
Intermezzo
Eco
INTERMISSION
String Symphony No. 10.................................. Mendelssohn
In one movement
Sinfonia Conccrtantc in E-flat major, K. 364,
for Violin and Viola.......................................... Mozart
Allegro maestoso
Andante
Presto
Iona Brown, Violinist, and Lars Anders Tomter, Violist
The Norwegian Chamber Orchestra acknowledges with gratitude the following companies who have helped to make possible its 1987 North American tour: Norseland Foods, Norsk Hydro Sales Corporation (New York), and Olsten Services.
Hall's Cough Tablets, courtesy of Warner-Lambert Company, are available in the lobby. Fifth Concert of the 109th Season Twenty-fifth Annual Chamber Arts Series
Johann Sebastian Bach (1685-1750): Concerto in D minor for Two Violins
This concerto is very likely the best known of all Baroque concertos for two instruments. Stravinsky once called it "the most perfect Baroque concerto in existence." Written while Bach was Kapellmeister at the small but musically active court in Kothen, from 1717 to 1723, it follows the pattern of the Italian concerto with its two fast movements and an aria-like slow movement in the middle.
Arne Nordheim (6. 1931): Rendez-vous for Strings (1987)
Rendez-vous for Strings is a brand new composition, written specially for the Norwegian Chamber Orchestra. It was premiered during the Bergen Festival last May under lona Brown's direction and was an immediate success with the Festival audience. This evening's concert marks the first American performance of the work.
Arne Nordheim is considered one of Scandinavia's finest composers. In his Rendez-vous for Strings he returns to material close to him as a very young composer in the 1950s. The last movement, Eco, is almost identical to a work he wrote for string quartet in 1953 with the German title Naclmif.
Felix Mendelssohn (1809-1847): String Symphony No. 10
After Mozart, perhaps the greatest prodigy in the history of Western music was Felix Mendelssohn. He was fifteen when he wrote the inspired music to Shakespeare's comedy A Midsummer Night's Dream, but between ages nine and ten he had already composed a number of extremely well-proportioned string symphonies. The one heard tonight, No. 10, is generally regarded as one of his best.
Wolfgang Amadous Mozart (1756-1791): Sinfonia Concertante in E-flat major for Violin and Viola, K. 364
This work of three movements was the last of Mozart's works in concertantc-style; his subsequent orchestral works were concertos and symphonies proper. It is a shining piece of music, brilliantly written for the solo instruments, with a forceful maestoso opening theme and movement; a very emotional, almost sentimental andante, giving great relief; and a light third movement rather like a happy ending. It is the apotheosis of the concertante genre.
About the Artists
The Norwegian Chamber Orchestra was founded in the summer of 1975 and became a permanent body in 1977. Its members, drawn from the cream of Norwegian orchestral musicians and predominantly young people, have been praised for "playing with all the finesse and feeling for ensemble of a long established string quartet." (Hi-Fi News) They made their debut in December 1977 under the leadership of their concertmastcr Terje Tonneson, receiving rave reviews from the critics. The orchestra has since toured widely in Europe, with visits to Germany, Holland, England, Spain, Austria, Switzerland, and Italy. In February 1984 they gave a number of concerts in the Caribbean with Mstislav Rostropovich and later that year made their debut in the United States. The group performs a wide variety of repertoire, including a substantial number of works by contempo?rary Norwegian composers. They have recorded Mozart piano concertos for Turnabout and an all-Grieg album on the Bis label.
lona Brown, the orchestra's artistic director and soloist since 1981, was born in Salisbury, England, into a highly musical family. She studied in Rome, Brussels, Vienna, and with Hcnryk Szeryng in Paris. In 1974 she was appointed director of the Academy of St. Martin-in-the-Ficlds and, as director and soloist, has made a glittering scries of recordings with them. Also, she has recorded David Blake's Violin Concerto, a piece written for and dedicated to her, and the Bartok Concerto No. 2 with the Philharmonia Orchestra and Simon Rattle. In addition to her work with the Norwegian Chamber Orchestra, Miss Brown was given a three-year appointment in 1985 as guest director of the City of Birmingham Symphony Orchestra. She is in demand throughout the world as both soloist and director, and her current season features appearances with the symphony orchestras of San Francisco and Detroit, and the Los Angeles Chamber Orchestra.
Miss Brown was among those on the Queen's 1986 New Year's Honors list to be awarded an Order of the British Empire for services to music. Her violin is byj. B. Guadagnini from Piacenza, 1740.
The Norwegian Chamber Orchestra makes its Ann Arbor debut with this concert; lona Brown returns after a 1980 appearance with the Academy of St. Martin-in-the-Fields.
ORCHESTRA PERSONNEL Violins: lona Brown, Pauls Ezcrgailis, Joern Halbakken, Odd Hannisdal,
Geir Inge Lotsberg, Svein H. Martinsen, Ingrid Willasscn, Sissel Schecn,
Oeivind Nusslc, Atle Sponberg
Violas: Lars Anders Tomter, Are Sandbakken, Birgitta Halbakken Cellos: Oeystein Birkcland, Ncal Edward Brown, Sara Wijk
Double Bass: Suante Henrysson Oboes: Erik Niord Larsen, Inga Eeg-Hcnriksen French Horns: Kjell Erik Arnescn, Vidar Aarscth Harpsichord: Leif Ree-Pedcrsen
UNIVERSITY MUSICAL SOCIETY
Burton Memorial Tower, Ann Arbor, Michigan 48109-1270 Telephone: (313) 764-2538