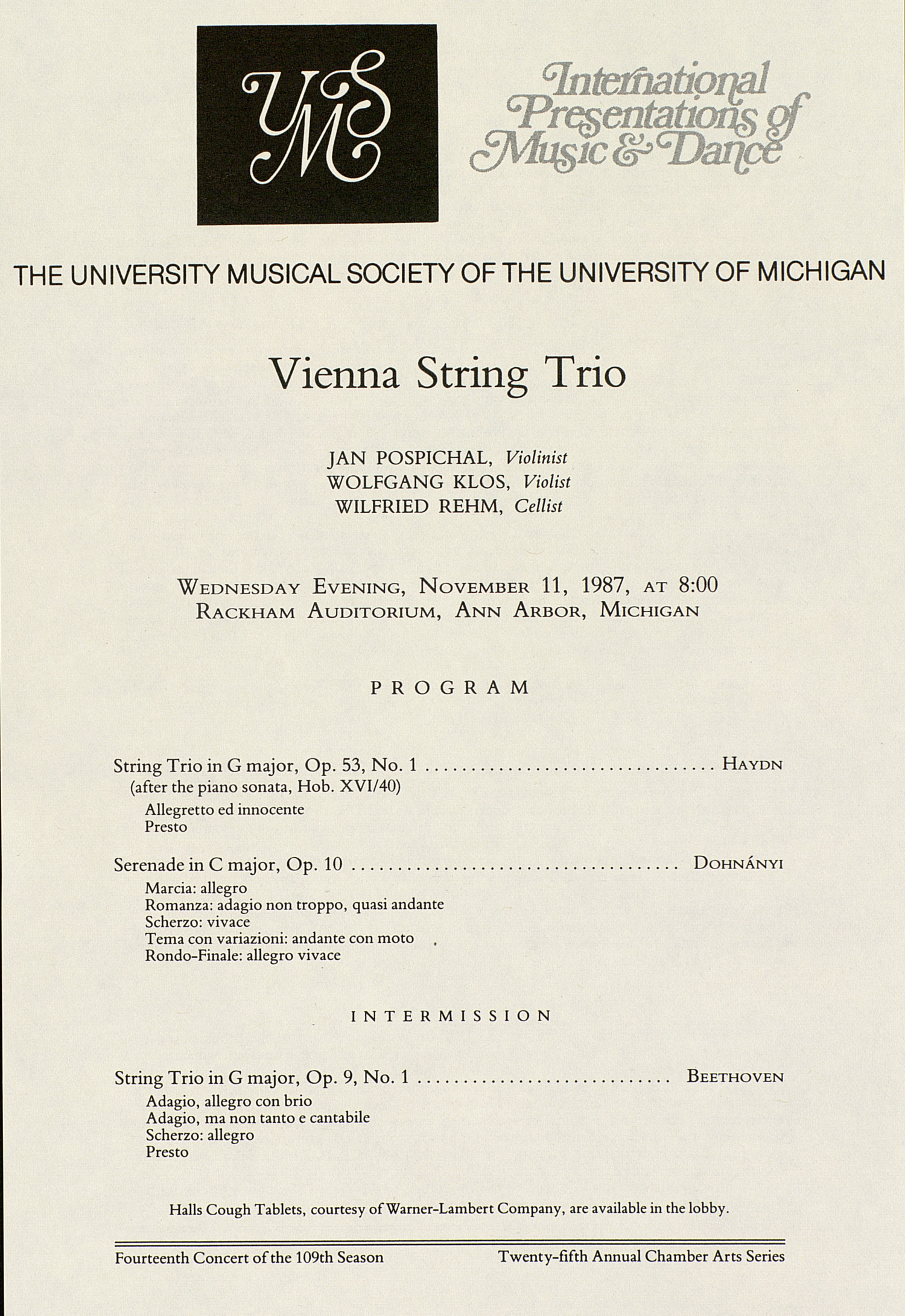 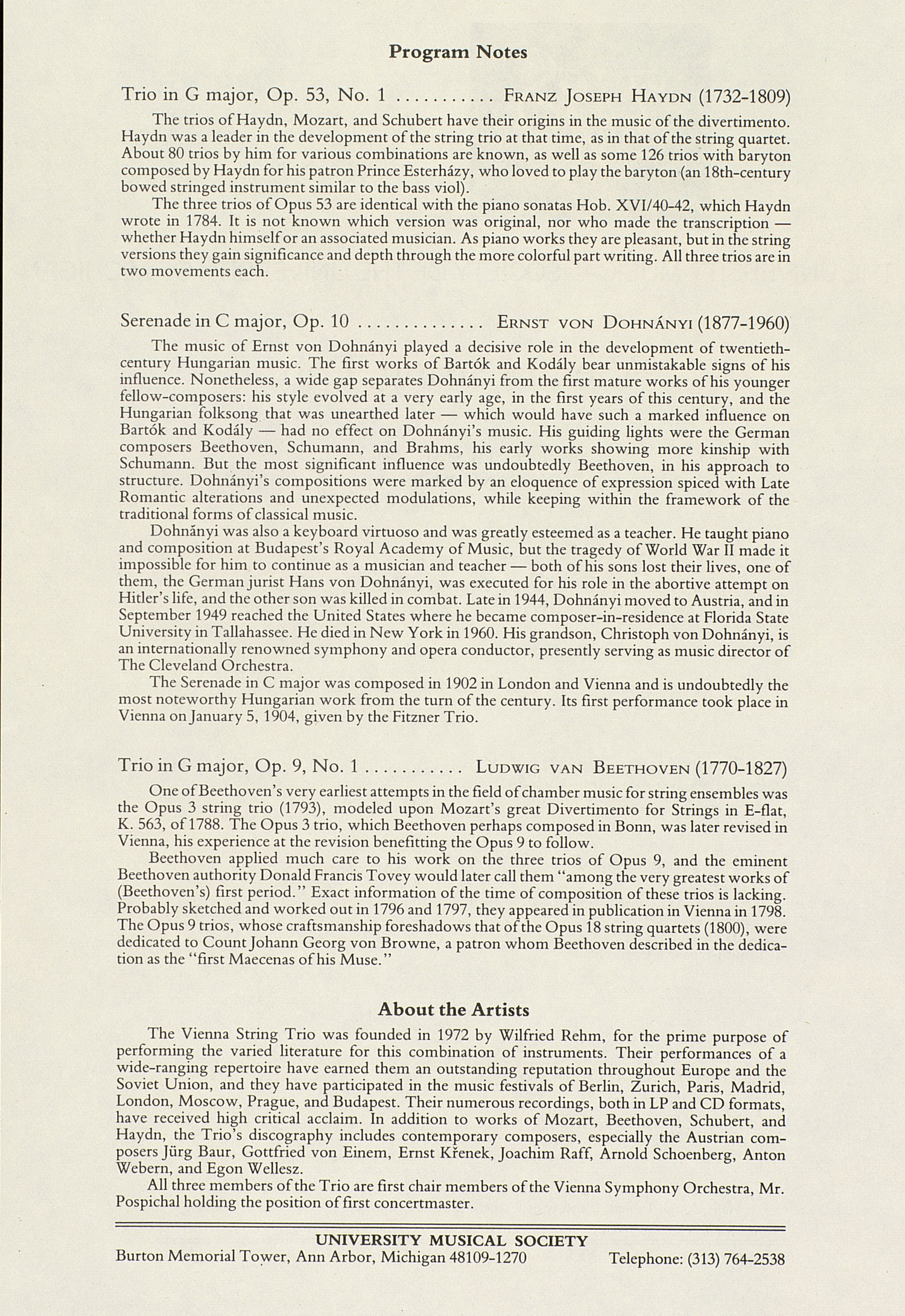 lntetfiatipnal
THE UNIVERSITY MUSICAL SOCIETY OF THE UNIVERSITY OF MICHIGAN
Vienna String Trio
JAN POSPICHAL, Violinist
WOLFGANG KLOS, Violist
WILFRIED REHM, Cellist
Wednesday Evening, November 11, 1987, at 8:00 Rackham Auditorium, Ann Arbor, Michigan
PROGRAM
String Trio in G major, Op. 53, No. 1................................Haydn
(after the piano sonata, Hob. XVI40)
Allegretto ed innocente Presto
Serenade in C major, Op. 10.................................... Dohnanyi
Marcia: allegro
Romanza: adagio non troppo, quasi andante
Scherzo: vivace
Tema con variazioni: andante con moto
Rondo-Finale: allegro vivace
INTERMISSION
String Trio in G major, Op. 9, No. 1............................ Beethoven
Adagio, allegro con brio Adagio, ma non tanto e cantabile Scherzo: allegro Presto
Halls Cough Tablets, courtesy of Warner-Lambert Company, are available in the lobby. Fourteenth Concert of the 109th Season Twenty-fifth Annual Chamber Arts Series
Program Notes
Trio in G major, Op. 53, No. 1 ...........Franz Joseph Haydn (1732-1809)
The trios of Haydn, Mozart, and Schubert have their origins in the music of the divertimento. Haydn was a leader in the development of the string trio at that time, as in that of the string quartet. About 80 trios by him for various combinations are known, as well as some 126 trios with baryton composed by Haydn for his patron Prince Esterhazy, who loved to play the baryton (an 18th-century bowed stringed instrument similar to the bass viol).
The three trios of Opus 53 are identical with the piano sonatas Hob. XVI40-42, which Haydn wrote in 1784. It is not known which version was original, nor who made the transcription -whether Haydn himself or an associated musician. As piano works they are pleasant, but in the string versions they gain significance and depth through the more colorful part writing. All three trios are in two movements each.
Serenade in C major, Op. 10.............. Ernst von Dohnanyi (1877-1960)
The music of Ernst von Dohnanyi played a decisive role in the development of twentieth-century Hungarian music. The first works of Bartok and Kodaly bear unmistakable signs of his influence. Nonetheless, a wide gap separates Dohnanyi from the first mature works of his younger fellow-composers: his style evolved at a very early age, in the first years of this century, and the Hungarian folksong that was unearthed later -which would have such a marked influence on Bartok and Kodaly -had no effect on Dohnanyi's music. His guiding lights were the German composers Beethoven, Schumann, and Brahms, his early works showing more kinship with Schumann. But the most significant influence was undoubtedly Beethoven, in his approach to structure. Dohnanyi's compositions were marked by an eloquence of expression spiced with Late Romantic alterations and unexpected modulations, while keeping within the framework of the traditional forms of classical music.
Dohnanyi was also a keyboard virtuoso and was greatly esteemed as a teacher. He taught piano and composition at Budapest's Royal Academy of Music, but the tragedy of World War II made it impossible for him to continue as a musician and teacher -both of his sons lost their lives, one of them, the German jurist Hans von Dohnanyi, was executed for his role in the abortive attempt on Hitler's life, and the other son was killed in combat. Late in 1944, Dohnanyi moved to Austria, and in September 1949 reached the United States where he became composer-in-residence at Florida State University in Tallahassee. He died in New York in 1960. His grandson, Christoph von Dohnanyi, is an internationally renowned symphony and opera conductor, presently serving as music director of The Cleveland Orchestra.
The Serenade in C major was composed in 1902 in London and Vienna and is undoubtedly the most noteworthy Hungarian work from the turn of the century. Its first performance took place in Vienna on January 5, 1904, given by the Fitzner Trio.
Trio in G major, Op. 9, No. 1........... Ludwig van Beethoven (1770-1827)
One of Beethoven's very earliest attempts in the field of chamber music for string ensembles was the Opus 3 string trio (1793), modeled upon Mozart's great Divertimento for Strings in E-flat, K. 563, of 1788. The Opus 3 trio, which Beethoven perhaps composed in Bonn, was later revised in Vienna, his experience at the revision benefitting the Opus 9 to follow.
Beethoven applied much care to his work on the three trios of Opus 9, and the eminent Beethoven authority Donald Francis Tovey would later call them "among the very greatest works of (Beethoven's) first period." Exact information of the time of composition of these trios is lacking. Probably sketched and worked out in 1796 and 1797, they appeared in publication in Vienna in 1798. The Opus 9 trios, whose craftsmanship foreshadows that of the Opus 18 string quartets (1800), were dedicated to Count Johann Gcorg von Browne, a patron whom Beethoven described in the dedica?tion as the "first Maecenas of his Muse."
About the Artists
The Vienna String Trio was founded in 1972 by Wilfried Rehm, for the prime purpose of performing the varied literature for this combination of instruments. Their performances of a wide-ranging repertoire have earned them an outstanding reputation throughout Europe and the Soviet Union, and they have participated in the music festivals of Berlin, Zurich, Paris, Madrid, London, Moscow, Prague, and Budapest. Their numerous recordings, both in LP and CD formats, have received high critical acclaim. In addition to works of Mozart, Beethoven, Schubert, and Haydn, the Trio's discography includes contemporary composers, especially the Austrian com?posers Jiirg Baur, Gottfried von Einem, Ernst Kfenek, Joachim Raff, Arnold Schoenberg, Anton Webern, and Egon Wellcsz.
All three members of the Trio are first chair members of the Vienna Symphony Orchestra, Mr. Pospichal holding the position of first concertmaster.
UNIVERSITY MUSICAL SOCIETY
Burton Memorial Tower, Ann Arbor, Michigan 48109-1270 Telephone: (313) 764-2538