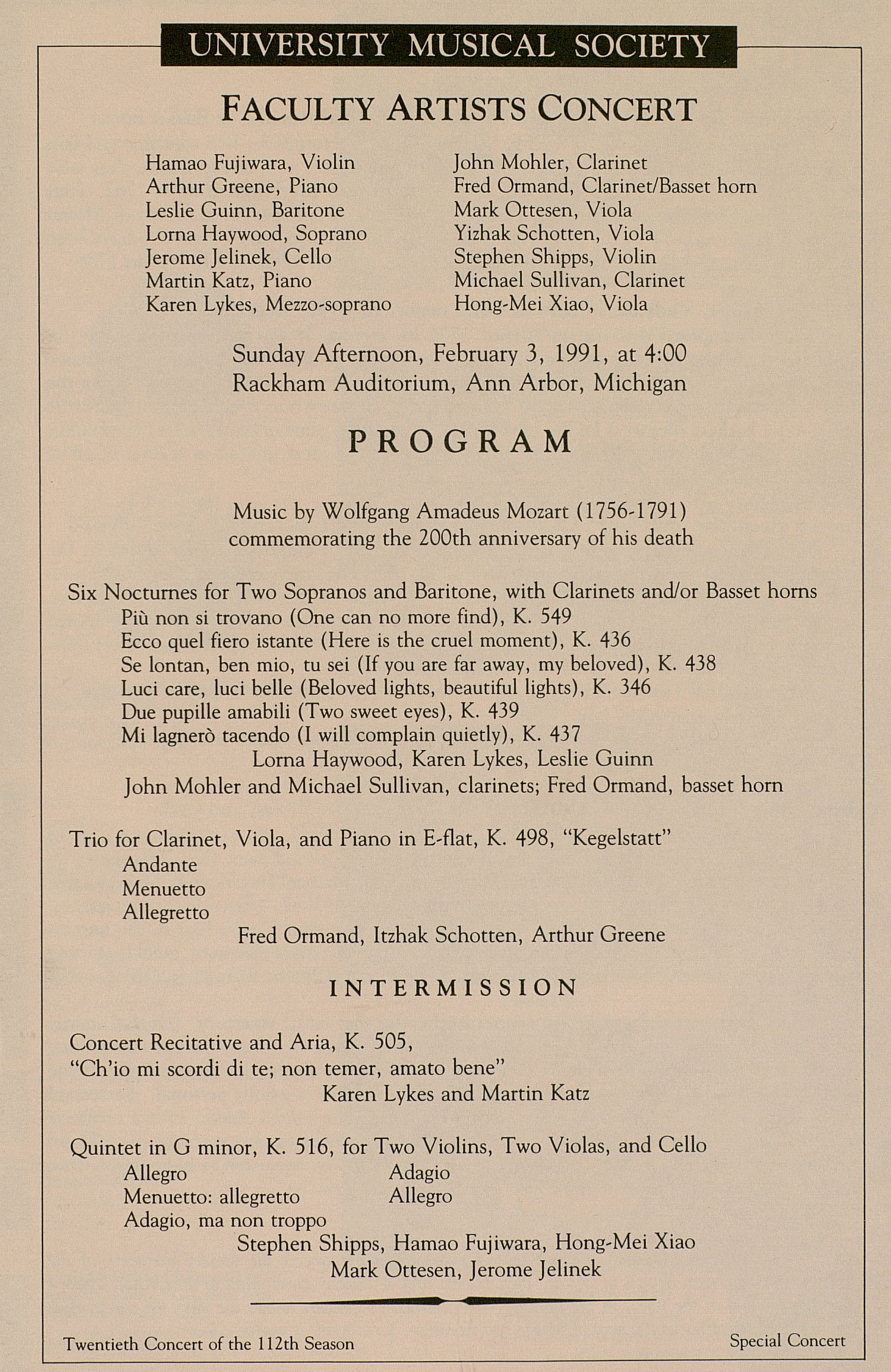 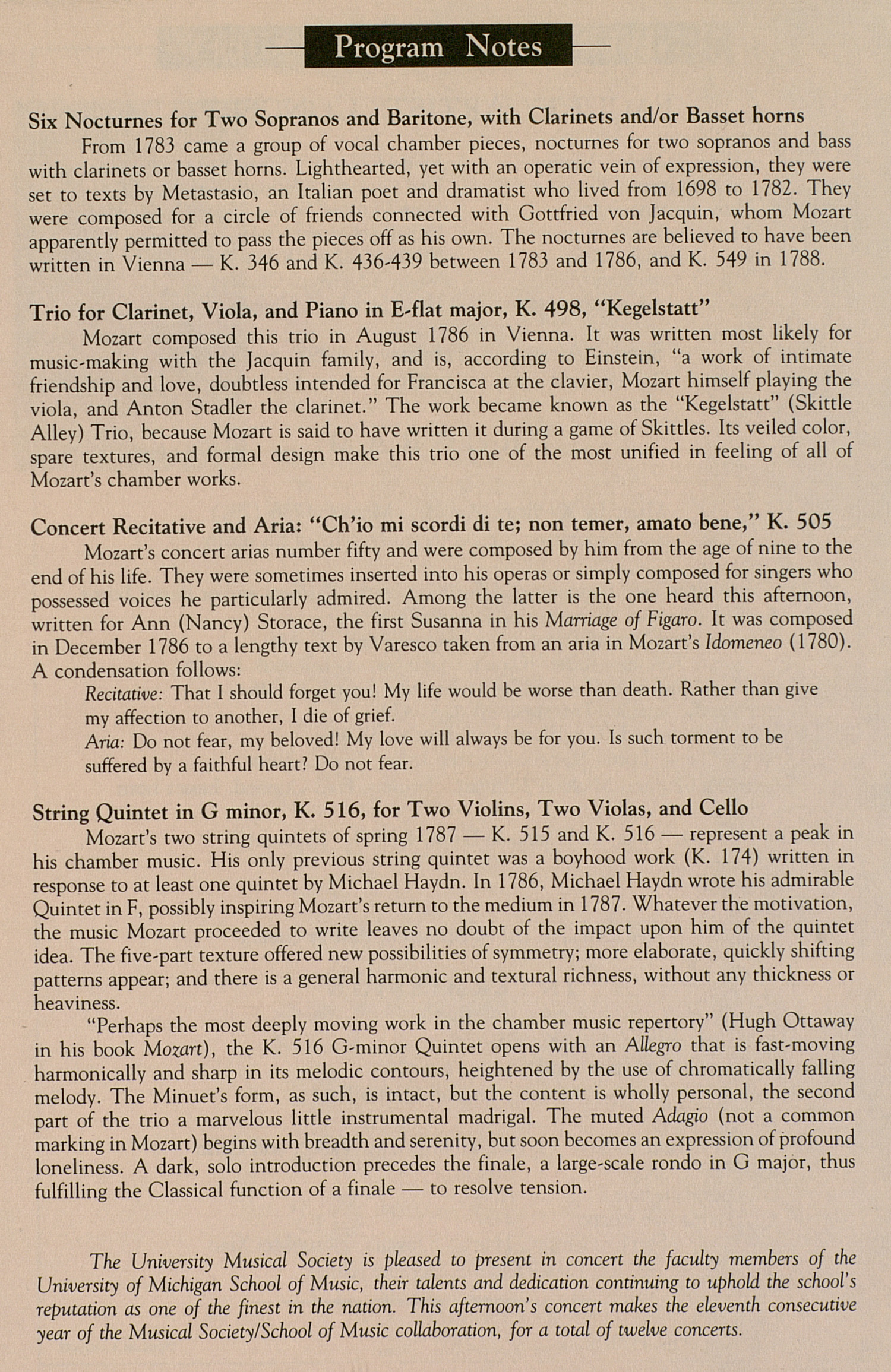 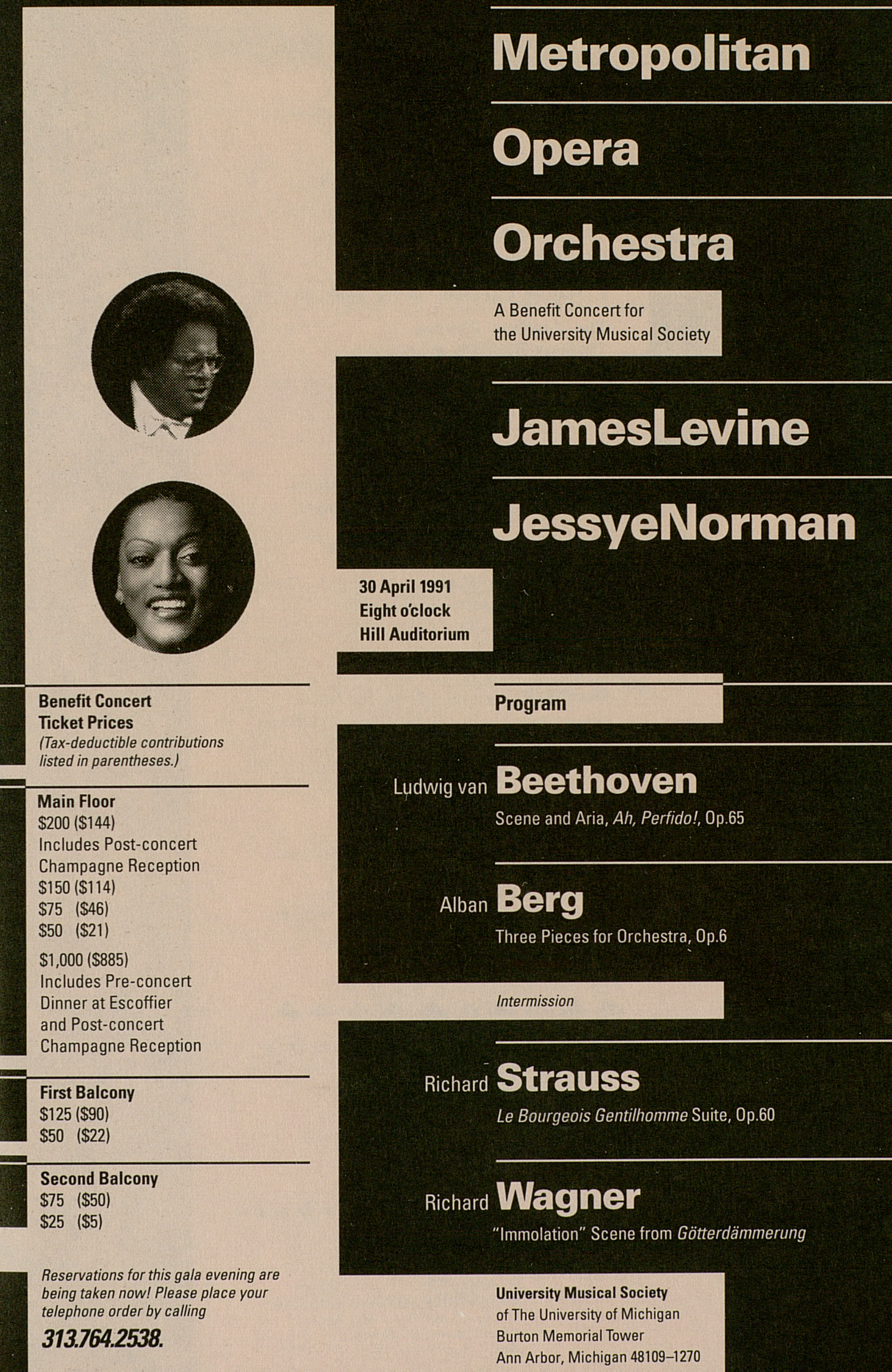 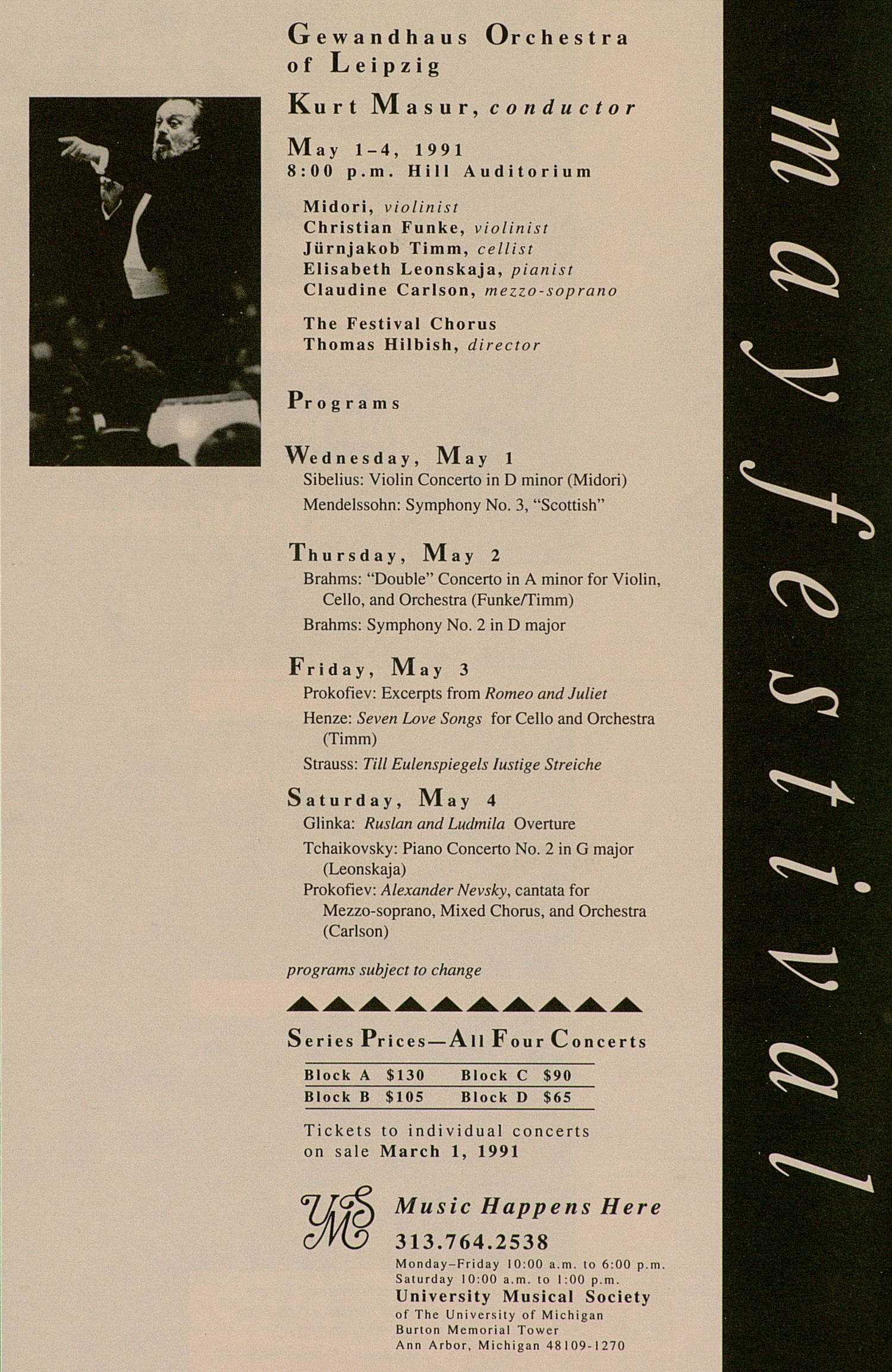 UNIVERSITY MUSICAL SOCIETY
FACULTY ARTISTS CONCERT
Hamao Fujiwara, Violin Arthur Greene, Piano Leslie Guinn, Baritone Lorna Hay wood, Soprano Jerome Jelinek, Cello Martin Katz, Piano Karen Lykes, Mezzo-soprano
John Mohler, Clarinet
Fred Ormand, ClarinetBasset horn
Mark Ottesen, Viola
Yizhak Schotten, Viola
Stephen Shipps, Violin
Michael Sullivan, Clarinet
Hong-Mei Xiao, Viola
Sunday Afternoon, February 3, 1991, at 4:00 Rackham Auditorium, Ann Arbor, Michigan
PROGRAM
Music by Wolfgang Amadeus Mozart (1756-1791) commemorating the 200th anniversary of his death
Six Nocturnes for Two Sopranos and Baritone, with Clarinets andor Basset horns Piu non si trovano (One can no more find), K. 549 Ecco quel fiero istante (Here is the cruel moment), K. 436 Se lontan, ben mio, tu sei (If you are far away, my beloved), K. 438 Luci care, luci belle (Beloved lights, beautiful lights), K. 346 Due pupille amabili (Two sweet eyes), K. 439 Mi lagnero tacendo (I will complain quietly), K. 437
Lorna Haywood, Karen Lykes, Leslie Guinn John Mohler and Michael Sullivan, clarinets; Fred Ormand, basset horn
Trio for Clarinet, Viola, and Piano in E-flat, K. 498, "Kegelstatt" Andante Menuetto Allegretto
Fred Ormand, Itzhak Schotten, Arthur Greene
INTERMISSION
Concert Recitative and Aria, K. 505,
"Ch'io mi scordi di te; non temer, amato bene"
Karen Lykes and Martin Katz
Quintet in G minor, K. 516, for Two Violins, Two Violas, and Cello Allegro Adagio
Menuetto: allegretto Allegro
Adagio, ma non troppo
Stephen Shipps, Hamao Fujiwara, Hong-Mei Xiao Mark Ottesen, Jerome Jelinek
Twentieth Concert of the 112th Season
Special Concert
Program Notes
Six Nocturnes for Two Sopranos and Baritone, with Clarinets andor Basset horns
From 1783 came a group of vocal chamber pieces, nocturnes for two sopranos and bass with clarinets or basset horns. Lighthearted, yet with an operatic vein of expression, they were set to texts by Metastasio, an Italian poet and dramatist who lived from 1698 to 1782. They were composed for a circle of friends connected with Gottfried von Jacquin, whom Mozart apparently permitted to pass the pieces off as his own. The nocturnes are believed to have been written in Vienna -K. 346 and K. 436-439 between 1783 and 1786, and K. 549 in 1788.
Trio for Clarinet, Viola, and Piano in E-flat major, K. 498, "Kegelstatt"
Mozart composed this trio in August 1786 in Vienna. It was written most likely for music-making with the Jacquin family, and is, according to Einstein, "a work of intimate friendship and love, doubtless intended for Francisca at the clavier, Mozart himself playing the viola, and Anton Stadler the clarinet." The work became known as the "Kegelstatt" (Skittle Alley) Trio, because Mozart is said to have written it during a game of Skittles. Its veiled color, spare textures, and formal design make this trio one of the most unified in feeling of all of Mozart's chamber works.
Concert Recitative and Aria: "Ch'io mi scordi di te; non temer, amato bene," K. 505
Mozart's concert arias number fifty and were composed by him from the age of nine to the end of his life. They were sometimes inserted into his operas or simply composed for singers who possessed voices he particularly admired. Among the latter is the one heard this afternoon, written for Ann (Nancy) Storace, the first Susanna in his Marriage of Figaro. It was composed in December 1786 to a lengthy text by Varesco taken from an aria in Mozart's ldomeneo (1780). A condensation follows:
Recitative: That I should forget you! My life would be worse than death. Rather than give
my affection to another, I die of grief.
Aria: Do not fear, my beloved! My love will always be for you. Is such torment to be
suffered by a faithful heart Do not fear.
String Quintet in G minor, K. 516, for Two Violins, Two Violas, and Cello
Mozart's two string quintets of spring 1787 -K. 515 and K. 516 -represent a peak in his chamber music. His only previous string quintet was a boyhood work (K. 174) written in response to at least one quintet by Michael Haydn. In 1786, Michael Haydn wrote his admirable Quintet in F, possibly inspiring Mozart's return to the medium in 1787. Whatever the motivation, the music Mozart proceeded to write leaves no doubt of the impact upon him of the quintet idea. The five-part texture offered new possibilities of symmetry; more elaborate, quickly shifting patterns appear; and there is a general harmonic and textural richness, without any thickness or heaviness.
"Perhaps the most deeply moving work in the chamber music repertory" (Hugh Ottaway in his book Mozart), the K. 516 G-minor Quintet opens with an Allegro that is fast-moving harmonically and sharp in its melodic contours, heightened by the use of chromatically falling melody. The Minuet's form, as such, is intact, but the content is wholly personal, the second part of the trio a marvelous little instrumental madrigal. The muted Adagio (not a common marking in Mozart) begins with breadth and serenity, but soon becomes an expression of profound loneliness. A dark, solo introduction precedes the finale, a large-scale rondo in G major, thus fulfilling the Classical function of a finale -to resolve tension.
The University Musical Society is pleased to present in concert the faculty members of the University of Michigan School of Music, their talents and dedication continuing to uphold the school's reputation as one of the finest in the nation. This afternoon's concert makes the eleventh consecutive year of the Musical SocietySchool of Music collaboration, for a total of twelve concerts.