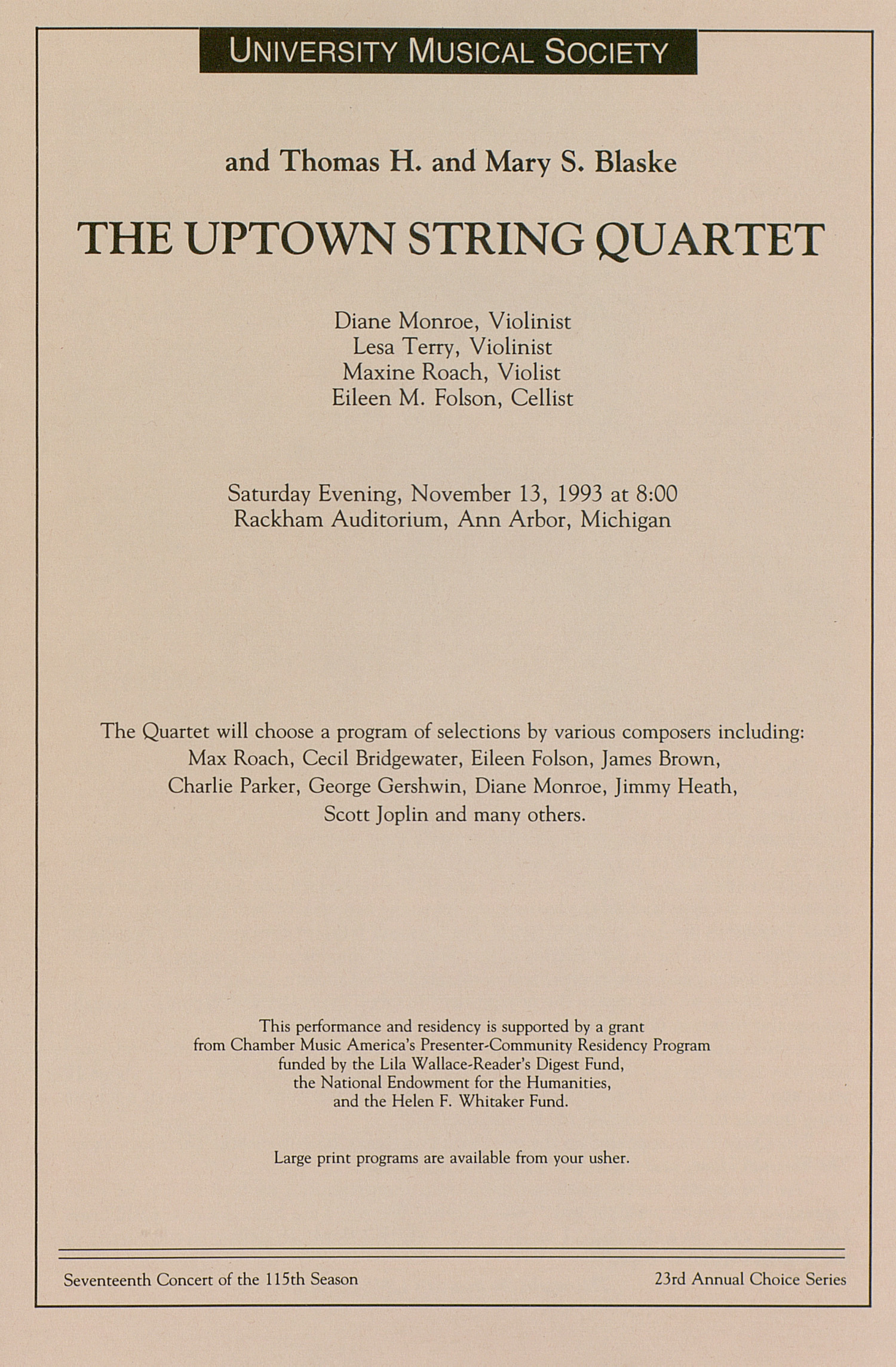 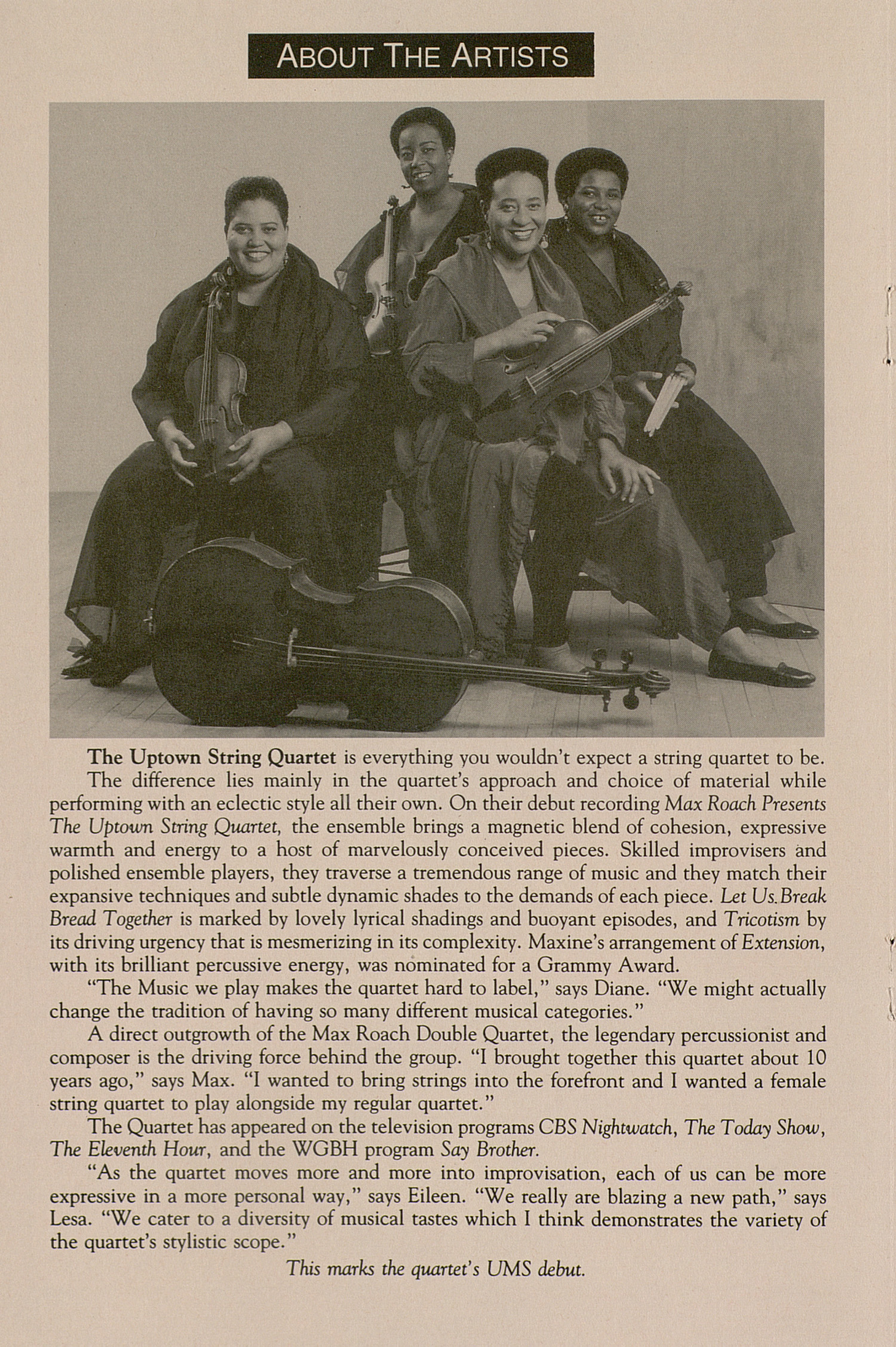 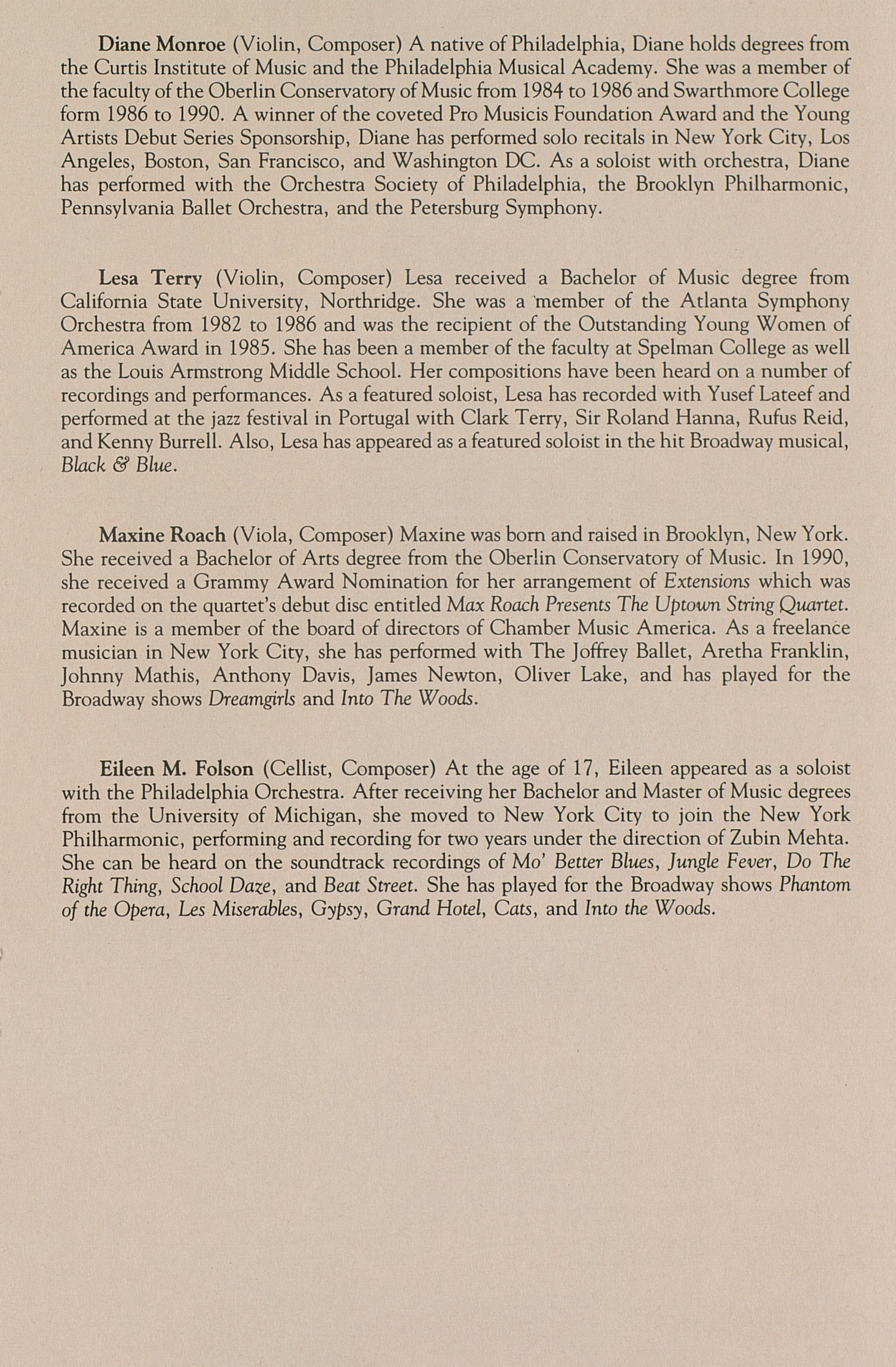 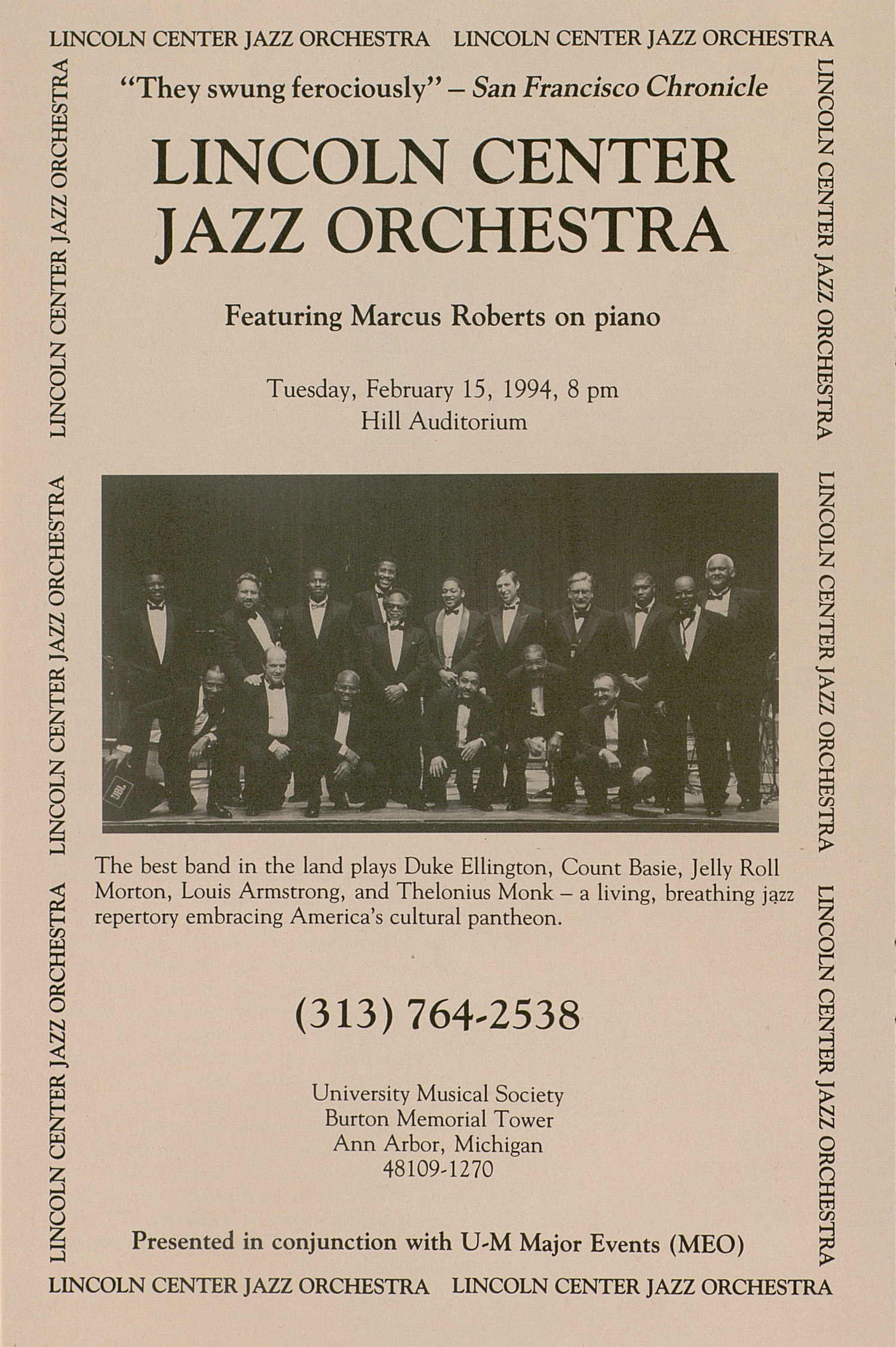 University Musical Society
and Thomas H. and Mary S. Blaske
THE UPTOWN STRING QUARTET
Diane Monroe, Violinist
Lesa Terry, Violinist
Maxine Roach, Violist
Eileen M. Folson, Cellist
Saturday Evening, November 13, 1993 at 8:00 Rackham Auditorium, Ann Arbor, Michigan
The Quartet will choose a program of selections by various composers including:
Max Roach, Cecil Bridgewater, Eileen Folson, James Brown,
Charlie Parker, George Gershwin, Diane Monroe, Jimmy Heath,
Scott Joplin and many others.
This performance and residency is supported by a grant
from Chamber Music America's Presenter-Community Residency Program
funded by the Lila Wallace-Reader's Digest Fund,
the National Endowment for the Humanities,
and the Helen F. Whitalcer Fund.
Large print programs are available from your usher.
Seventeenth Concert of the 115th Season
23rd Annual Choice Series
About The Artists
The Uptown String Quartet is everything you wouldn't expect a string quartet to be.
The difference lies mainly in the quartet's approach and choice of material while performing with an eclectic style all their own. On their debut recording Max Roach Presents The Uptown String Quartet, the ensemble brings a magnetic blend of cohesion, expressive warmth and energy to a host of marvelously conceived pieces. Skilled improvisers and polished ensemble players, they traverse a tremendous range of music and they match their expansive techniques and subtle dynamic shades to the demands of each piece. Let Us.Break Bread Together is marked by lovely lyrical shadings and buoyant episodes, and Tricotism by its driving urgency that is mesmerizing in its complexity. Maxine's arrangement of Extension, with its brilliant percussive energy, was nominated for a Grammy Award.
"The Music we play makes the quartet hard to label," says Diane. "We might actually change the tradition of having so many different musical categories."
A direct outgrowth of the Max Roach Double Quartet, the legendary percussionist and composer is the driving force behind the group. "I brought together this quartet about 10 years ago," says Max. "I wanted to bring strings into the forefront and I wanted a female string quartet to play alongside my regular quartet."
The Quartet has appeared on the television programs CBS Nightwatch, The Today Show, The Eleventh Hour, and the WGBH program Say Brother.
"As the quartet moves more and more into improvisation, each of us can be more expressive in a more personal way," says Eileen. "We really are blazing a new path," says Lesa. "We cater to a diversity of musical tastes which I think demonstrates the variety of the quartet's stylistic scope."
This marks the quartet's UMS debut.
Diane Monroe (Violin, Composer) A native of Philadelphia, Diane holds degrees from the Curtis Institute of Music and the Philadelphia Musical Academy. She was a member of the faculty of the Oberlin Conservatory of Music from 1984 to 1986 and Swarthmore College form 1986 to 1990. A winner of the coveted Pro Musicis Foundation Award and the Young Artists Debut Series Sponsorship, Diane has performed solo recitals in New York City, Los Angeles, Boston, San Francisco, and Washington DC. As a soloist with orchestra, Diane has performed with the Orchestra Society of Philadelphia, the Brooklyn Philharmonic, Pennsylvania Ballet Orchestra, and the Petersburg Symphony.
Lesa Terry (Violin, Composer) Lesa received a Bachelor of Music degree from California State University, Northridge. She was a member of the Atlanta Symphony Orchestra from 1982 to 1986 and was the recipient of the Outstanding Young Women of America Award in 1985. She has been a member of the faculty at Spelman College as well as the Louis Armstrong Middle School. Her compositions have been heard on a number of recordings and performances. As a featured soloist, Lesa has recorded with Yusef Lateef and performed at the jazz festival in Portugal with Clark Terry, Sir Roland Hanna, Rufus Reid, and Kenny Burrell. Also, Lesa has appeared as a featured soloist in the hit Broadway musical, Black & Blue.
Maxine Roach (Viola, Composer) Maxine was born and raised in Brooklyn, New York. She received a Bachelor of Arts degree from the Oberlin Conservatory of Music. In 1990, she received a Grammy Award Nomination for her arrangement of Extensions which was recorded on the quartet's debut disc entitled Max Roach Presents The Uptoum String Quartet. Maxine is a member of the board of directors of Chamber Music America. As a freelance musician in New York City, she has performed with The Jofrrey Ballet, Aretha Franklin, Johnny Mathis, Anthony Davis, James Newton, Oliver Lake, and has played for the Broadway shows Dreamgirls and Into The Woods.
Eileen M. Folson (Cellist, Composer) At the age of 17, Eileen appeared as a soloist with the Philadelphia Orchestra. After receiving her Bachelor and Master of Music degrees from the University of Michigan, she moved to New York City to join the New York Philharmonic, performing and recording for two years under the direction of Zubin Mehta. She can be heard on the soundtrack recordings of Mo' Better Blues, Jungle Fever, Do The Right Thing, School Daze, and Beat Street. She has played for the Broadway shows Phantom of the Opera, Les Miserables, Gypsy, Grand Hotel, Cats, and Into the Woods.
LINCOLN CENTER JAZZ ORCHESTRA LINCOLN CENTER JAZZ ORCHESTRA
They swung ferociously" -San Francisco Chronicle ?
1
1
P 2
"
LINCOLN CENTER 1
JAZZ ORCHESTRA I
N
2 N
g Featuring Marcus Roberts on piano o
z o
tj Tuesday, February 15, 1994, 8 pm c
S Hill Auditorium P
LINCOLN CENTER JAZZ ORCHESTRA
LINCOLN CENTER JAZZ ORCHESTRA
The best band in the land plays Duke Ellington, Count Basie, Jelly Roll Morton, Louis Armstrong, and Thelonius Monk a living, breathing jazz repertory embracing America's cultural pantheon.
(313)764-2538
University Musical Society
Burton Memorial Tower
Ann Arbor, Michigan
48109-1270
Presented in conjunction with U-M Major Events (MEO) LINCOLN CENTER JAZZ ORCHESTRA LINCOLN CENTER JAZZ ORCHESTRA