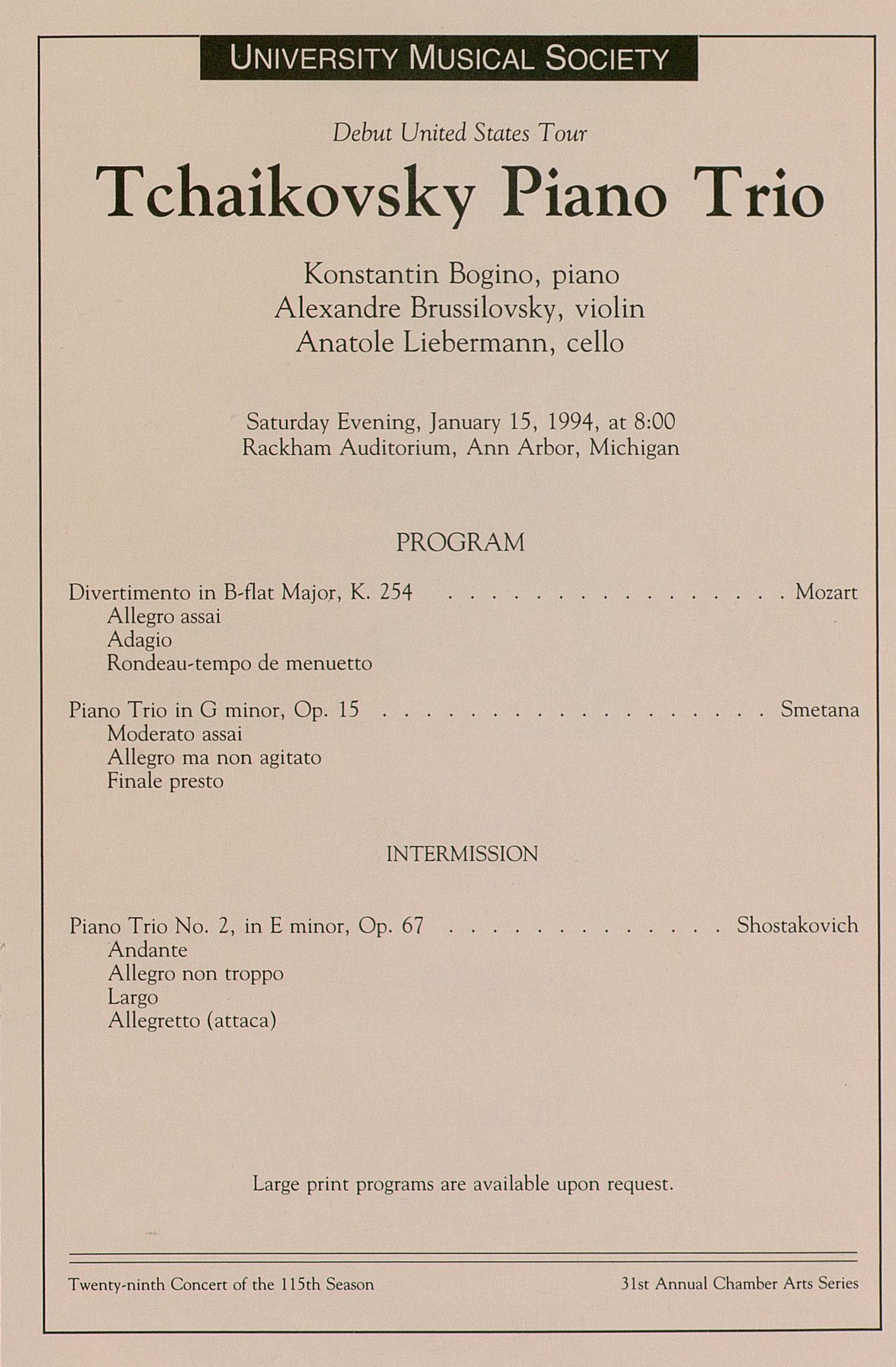 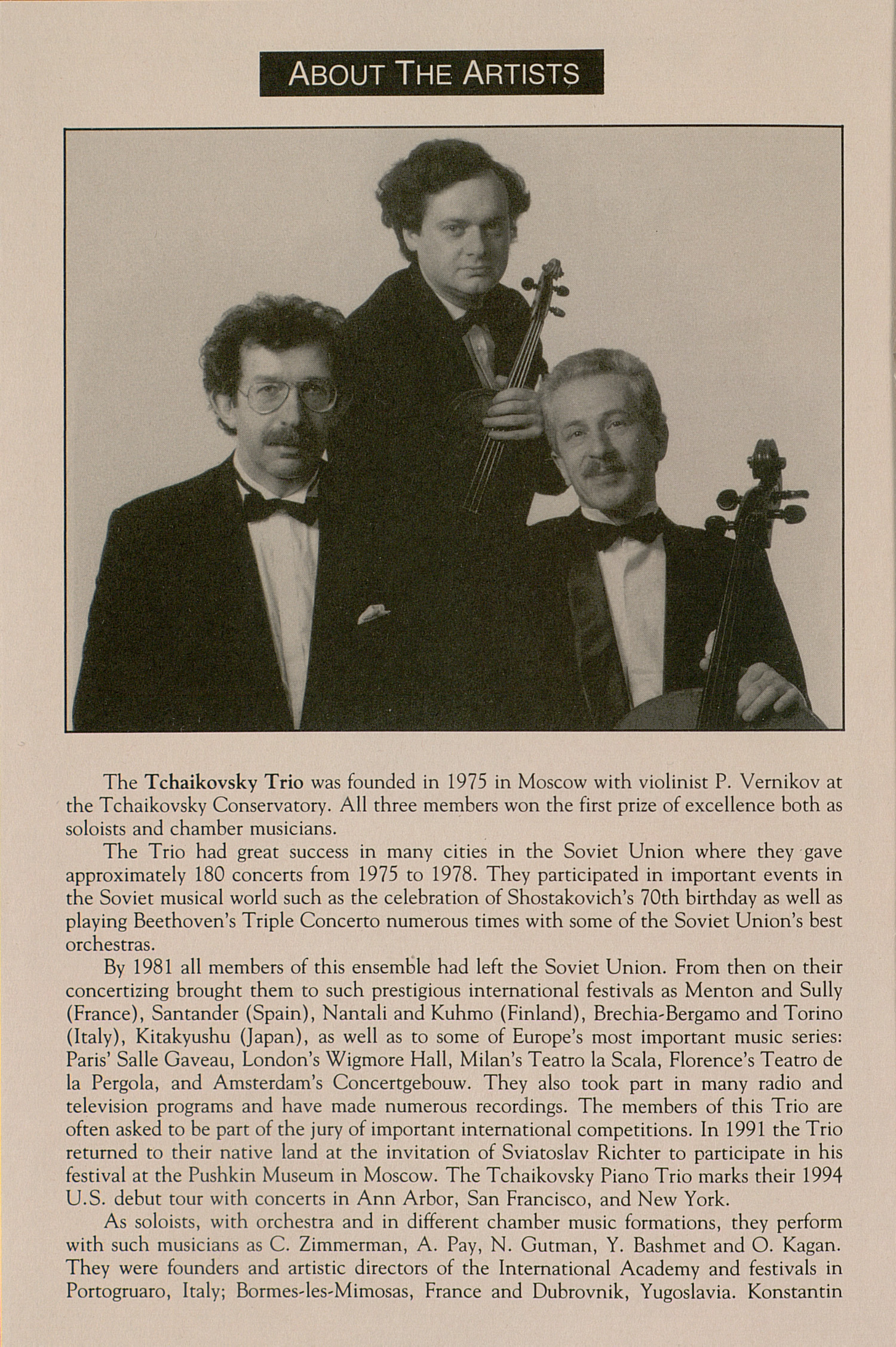 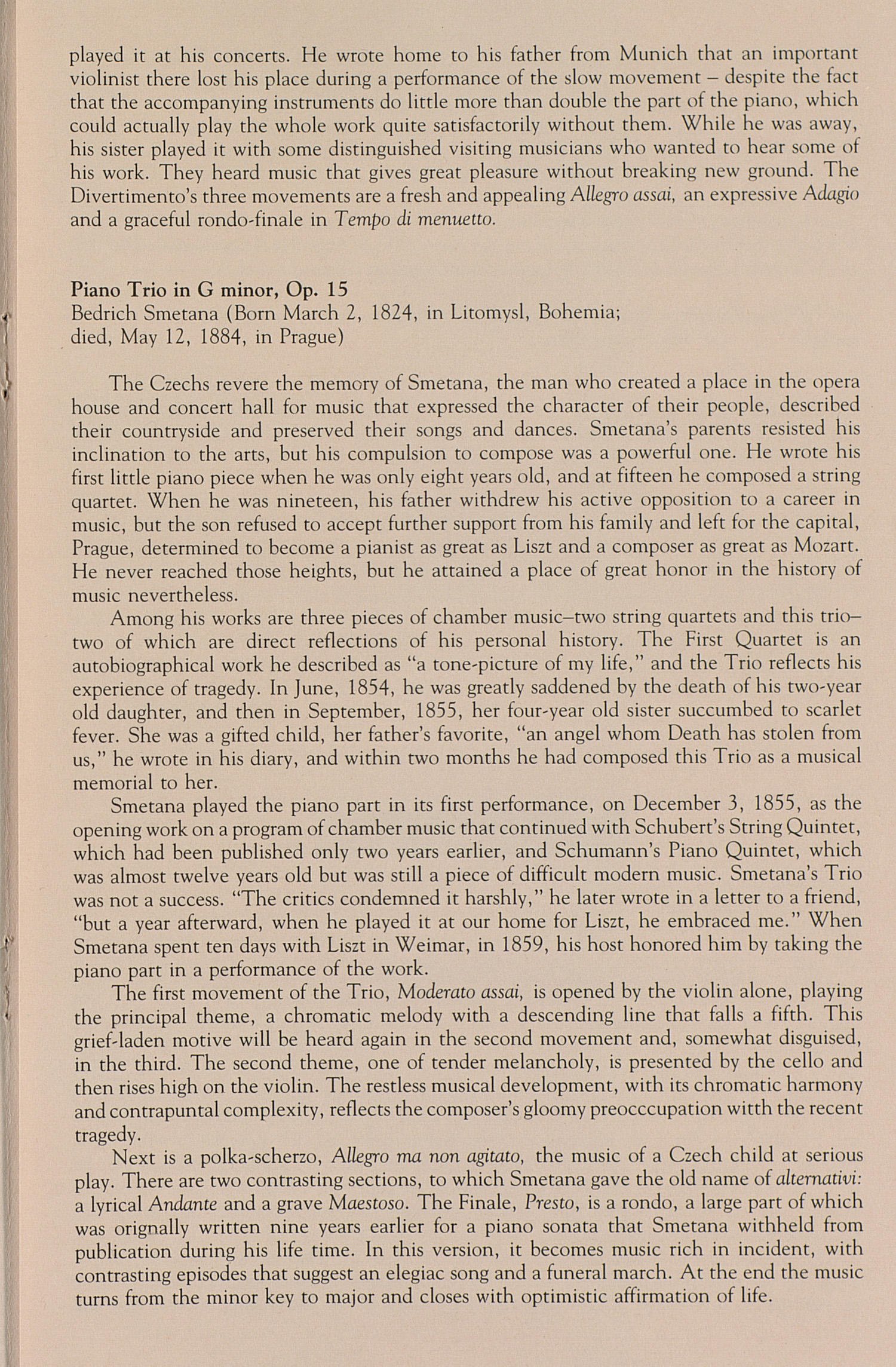 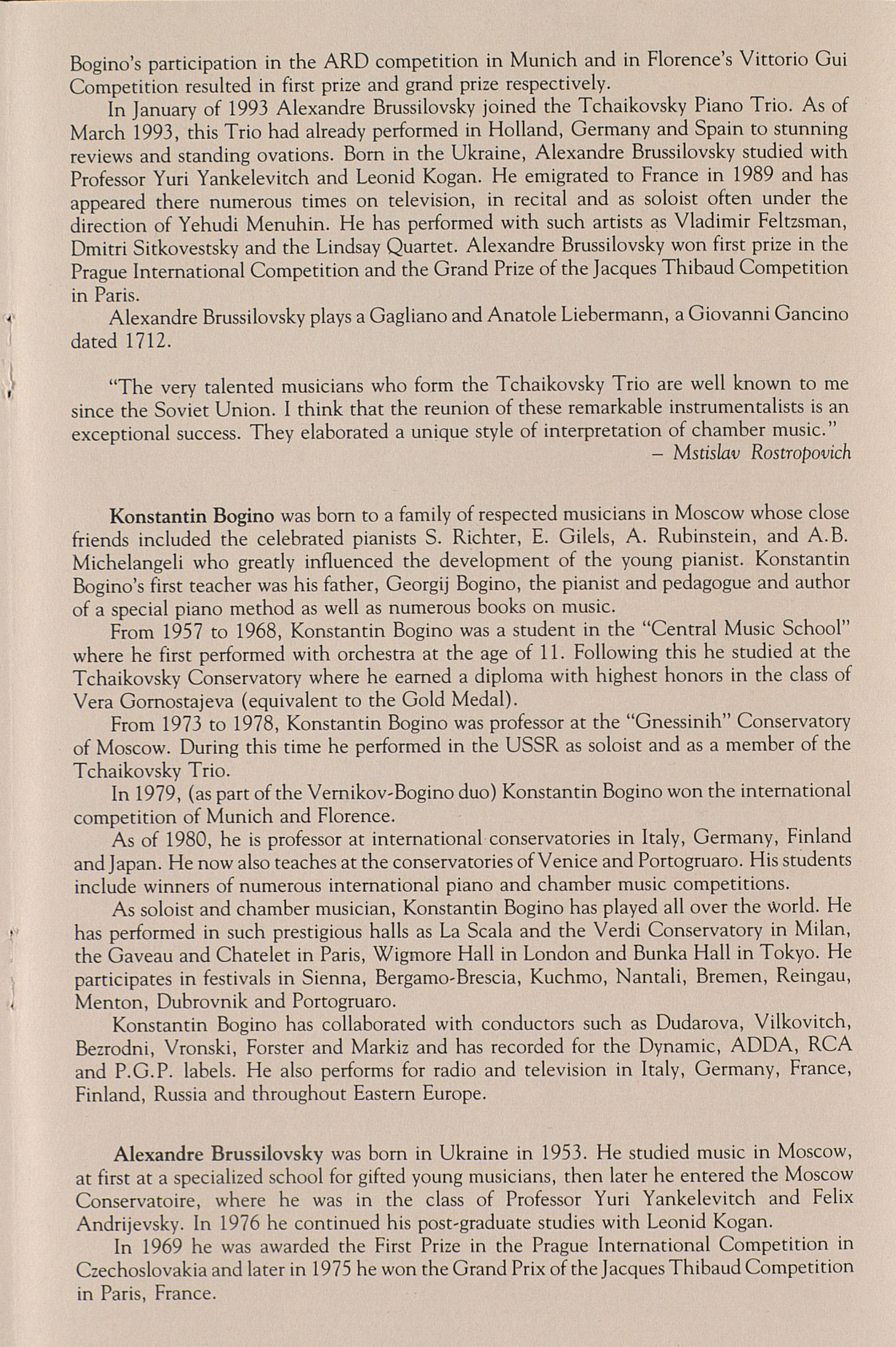 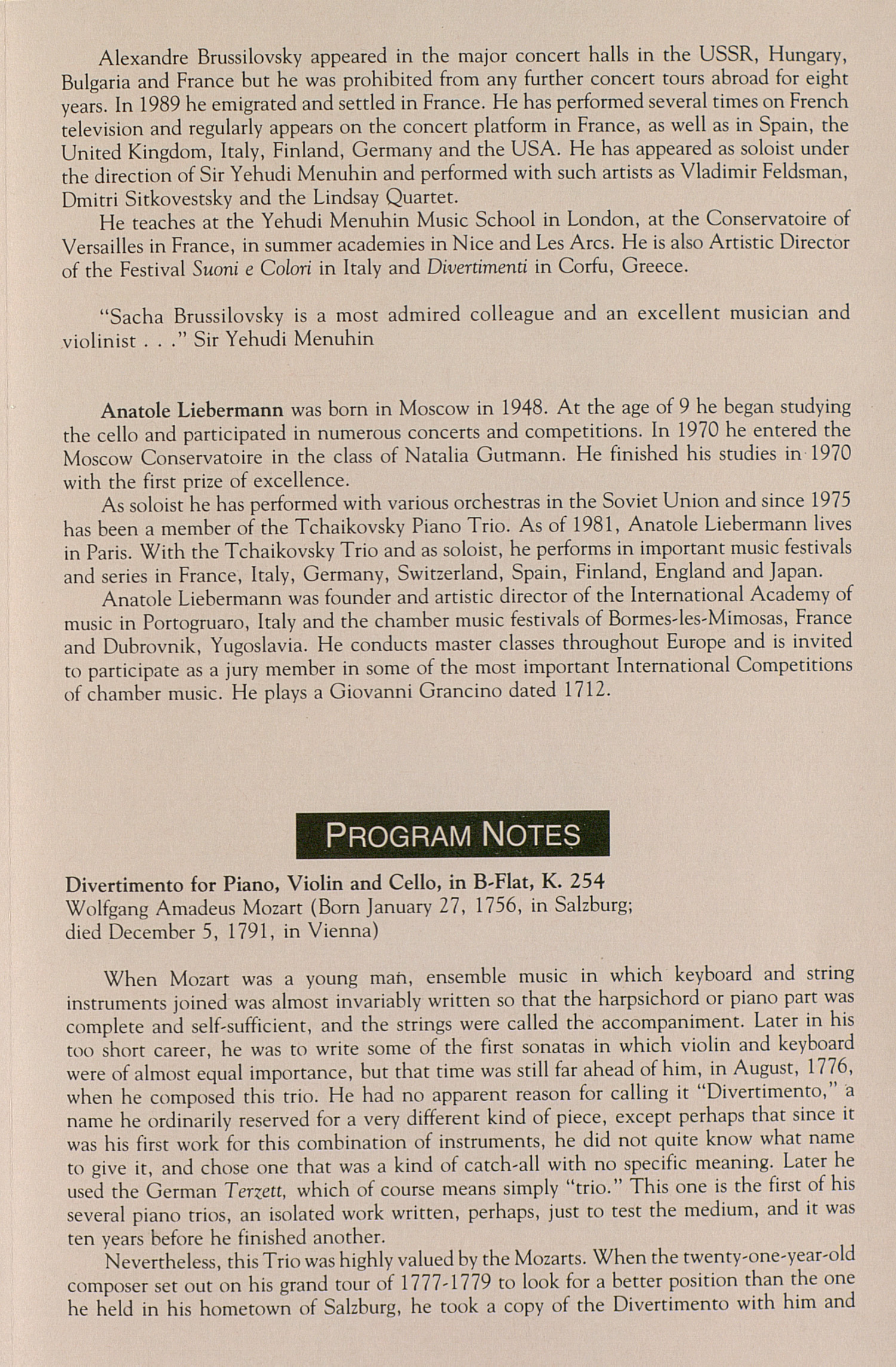 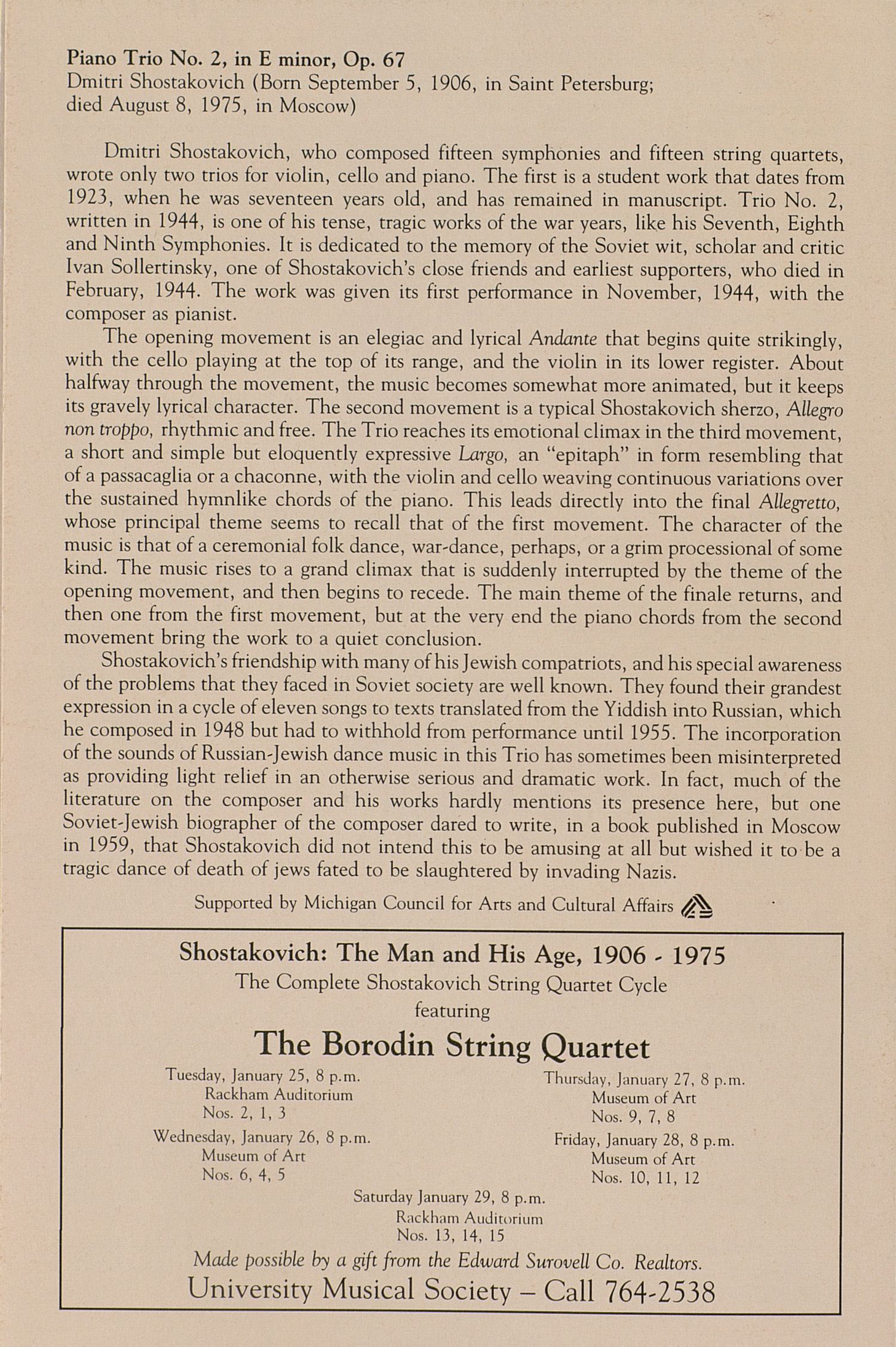 University Musical Society
Debut United States Tour
Tchaikovsky Piano Trio
Konstantin Bogino, piano
Alexandre Brussilovsky, violin
Anatole Liebermann, cello
Saturday Evening, January 15, 1994, at 8:00 Rackham Auditorium, Ann Arbor, Michigan
PROGRAM
Divertimento in B-flat Major, K. 254 ................Mozart
Allegro assai
Adagio
Rondeau-tempo de menuetto
Piano Trio in G minor, Op. 15..................Smetana
Moderato assai Allegro ma non agitato Finale presto
INTERMISSION
Piano Trio No. 2, in E minor, Op. 67.............Shostakovich
Andante
Allegro non troppo
Largo
Allegretto (attaca)
Large print programs are available upon request.
Twenty-ninth Concert of the 115th Season 31st Annual Chamber Arts Series
You Are Invited 1 A Callery Preview Reception
Wednesday, April ( 6:30 p.m. to 9:00 gp.
at Jacobson's prior to t "SPRING TO LIFE BRUNCH AND AUCTION
to be held Sunday, April 17 at N
to benefit the
iversity of Michig
Comprehensive Cancer Center,
Ann Arbor.
The Gallery will be on
display at Jacobson's April 6 through Apri
acoDsons
BRIARWOOD MALL, ANN ARBOR
The Tchaikovsky Trio was founded in 1975 in Moscow with violinist P. Vernikov at the Tchaikovsky Conservatory. All three members won the first prize of excellence both as soloists and chamber musicians.
The Trio had great success in many cities in the Soviet Union where they gave approximately 180 concerts from 1975 to 1978. They participated in important events in the Soviet musical world such as the celebration of Shostakovich's 70th birthday as well as playing Beethoven's Triple Concerto numerous times with some of the Soviet Union's best orchestras.
By 1981 all members of this ensemble had left the Soviet Union. From then on their concertizing brought them to such prestigious international festivals as Menton and Sully (France), Santander (Spain), Nantali and Kuhmo (Finland), Brechia-Bergamo and Torino (Italy), Kitakyushu (Japan), as well as to some of Europe's most important music series: Paris' Salle Gaveau, London's Wigmore Hall, Milan's Teatro la Scala, Florence's Teatro de la Pergola, and Amsterdam's Concertgebouw. They also took part in many radio and television programs and have made numerous recordings. The members of this Trio are often asked to be part of the jury of important international competitions. In 1991 the Trio returned to their native land at the invitation of Sviatoslav Richter to participate in his festival at the Pushkin Museum in Moscow. The Tchaikovsky Piano Trio marks their 1994 U.S. debut tour with concerts in Ann Arbor, San Francisco, and New York.
As soloists, with orchestra and in different chamber music formations, they perform with such musicians as C. Zimmerman, A. Pay, N. Gutman, Y. Bashmet and O. Kagan. They were founders and artistic directors of the International Academy and festivals in Portogruaro, Italy; Bormes-les-Mimosas, France and Dubrovnik, Yugoslavia. Konstantin
beer and wine in a natural food store
homemade sausage
haagendazs triple brownie overload
where on earth are we
Y At Whole Foods Market. A grocery store ' that offers broader choices than traditional health food stores and the quality
of the finest grocery stores.
We feature foods that are free of pesticides,
additives, animal testing and wasteful packaging.
They also happen to be over lQOOO
of the most heavenly foods on earth.
Thank You Corporate Underwriters
On behalf of the University Musical Society, I am privileged to recognize the companies whose support of UMS through their major corporate underwriting reflects their position as leaders in the Southeastern Michigan business community.
Their generous support provides a solid base from which we are better able to present outstand?ing performances for the varied audiences of this part of the state.
We are proud to be associated with these companies. Their significant participation in our underwriting program strengthens the increasingly important partnership between business and the arts. We thank these commu?nity leaders for this vote of confidence in the Musical Society and for the help they provide to serve you, our audience, better.
Kenneth C. Fischer Executive Director
University Musical Society
Harold A. Poling
Chairman, Chief Executive Officer Ford Motor Company
A Salute To Our Corporate Angels...