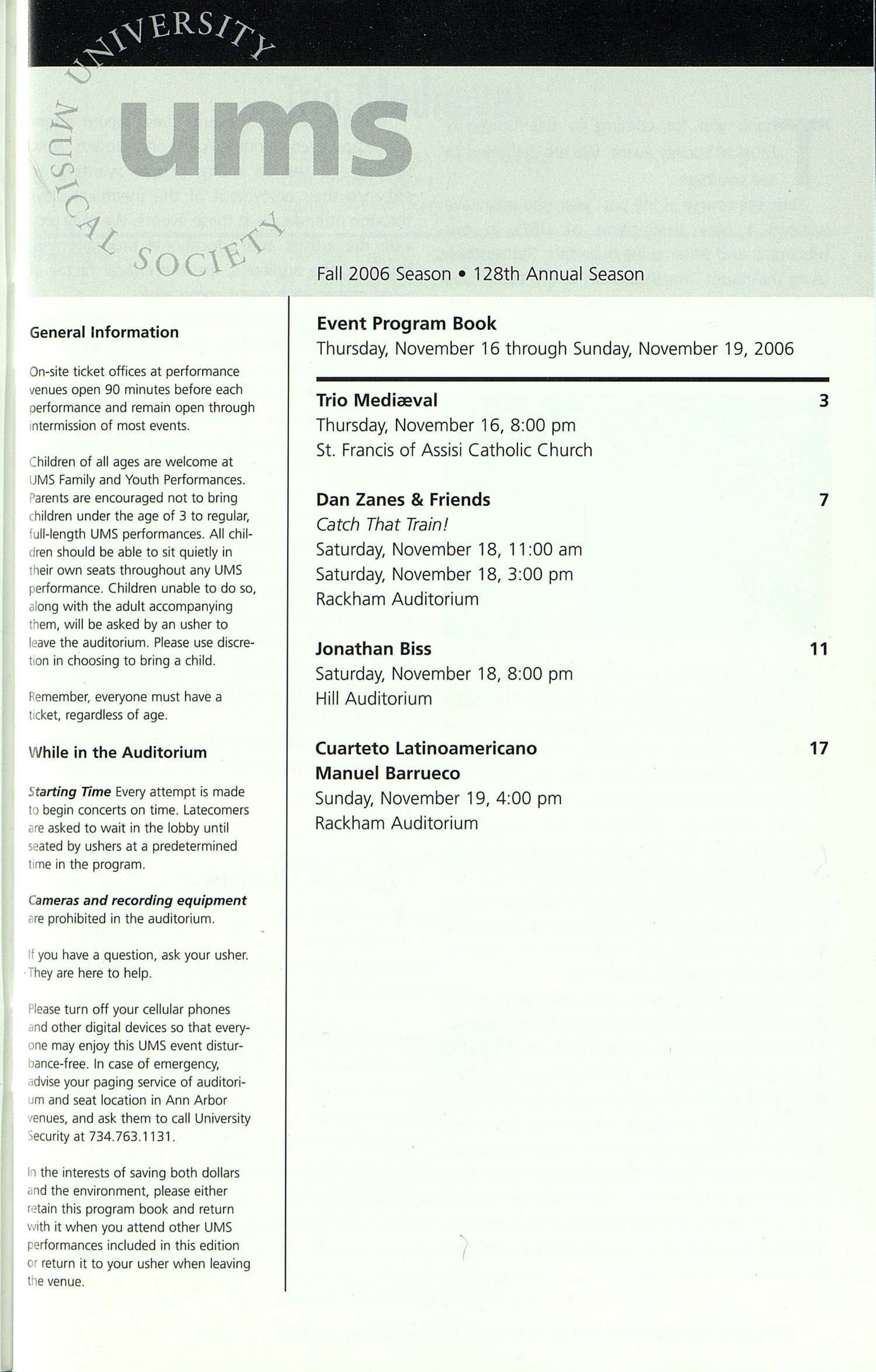 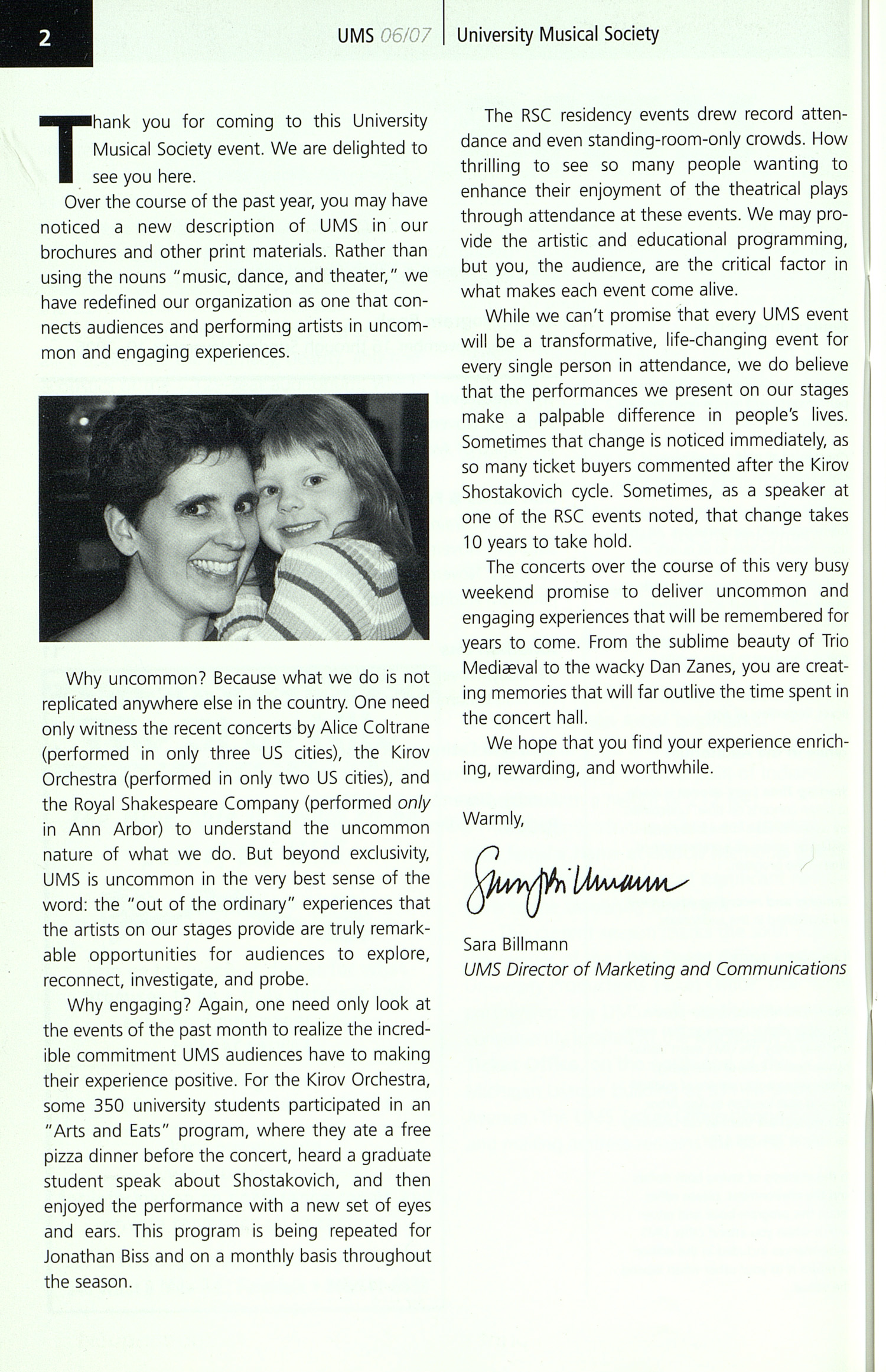 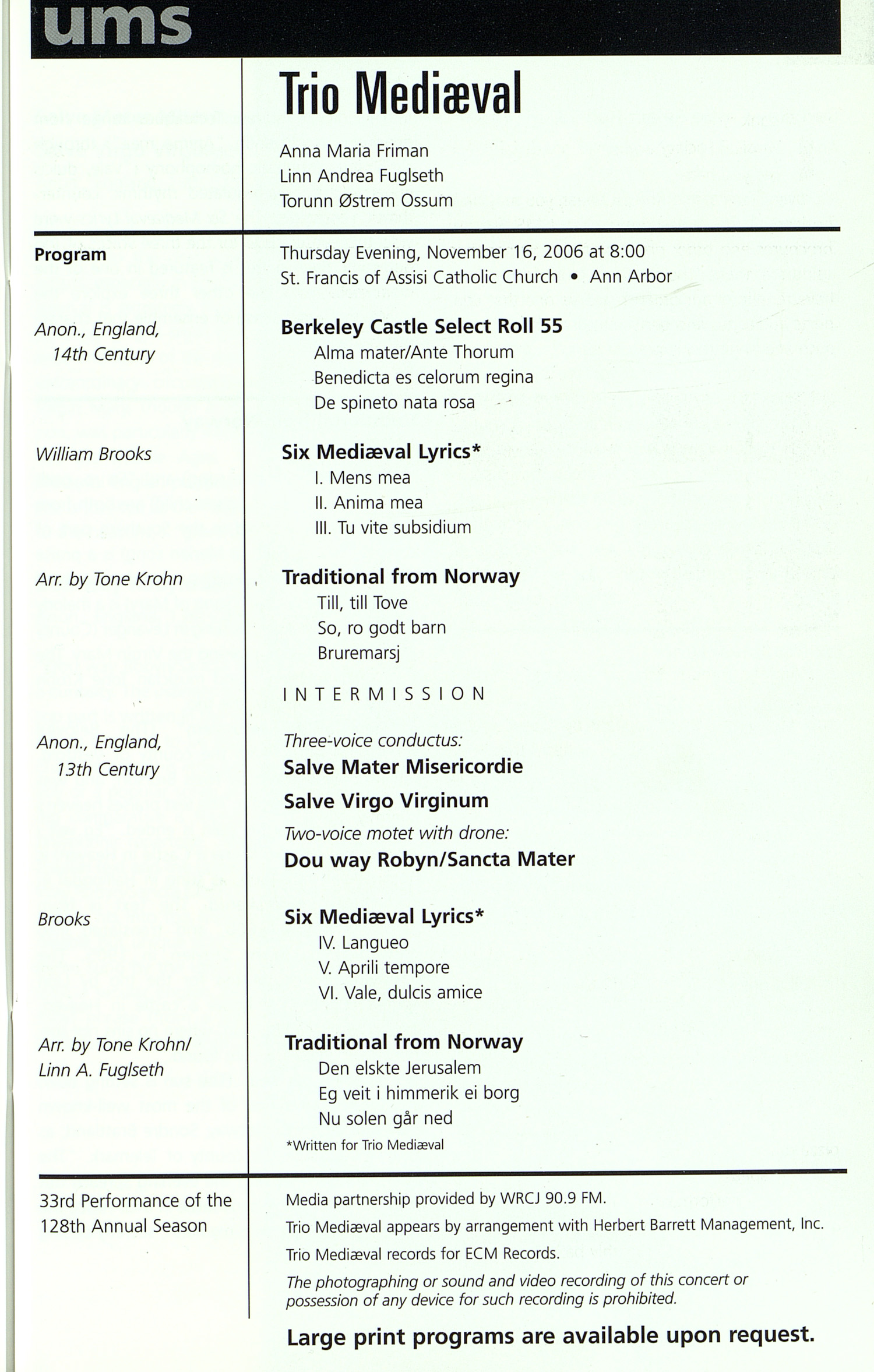 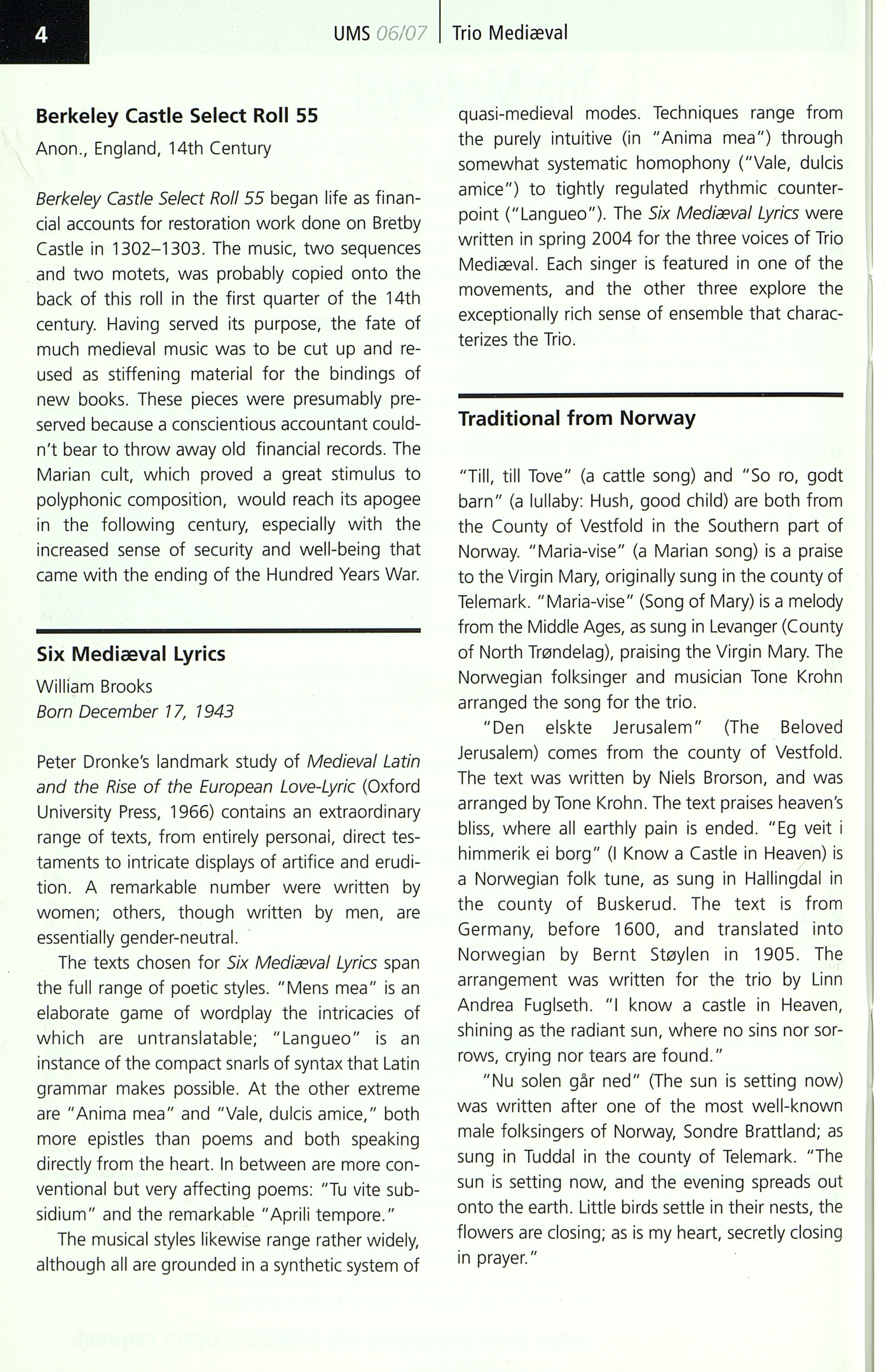 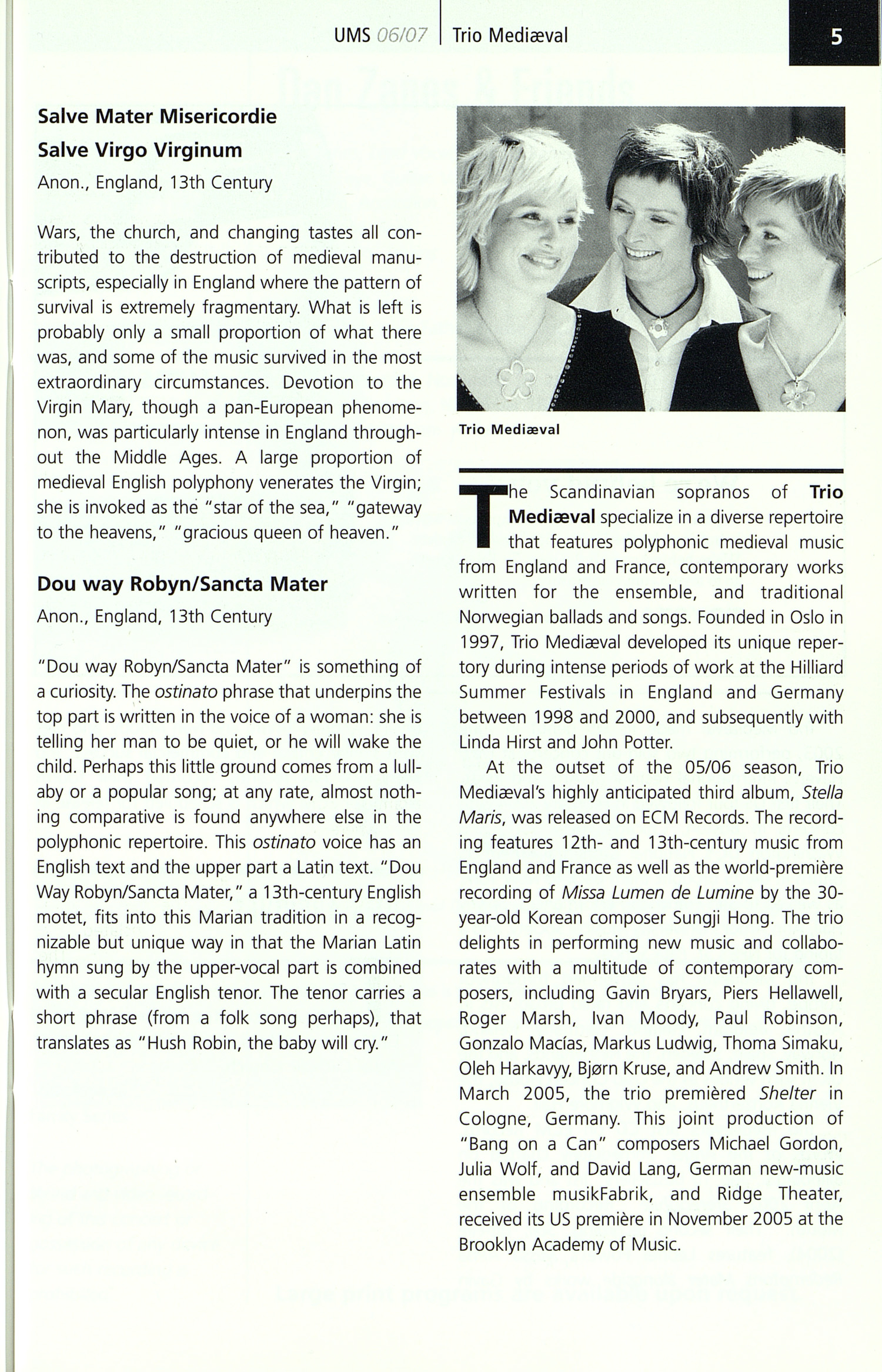 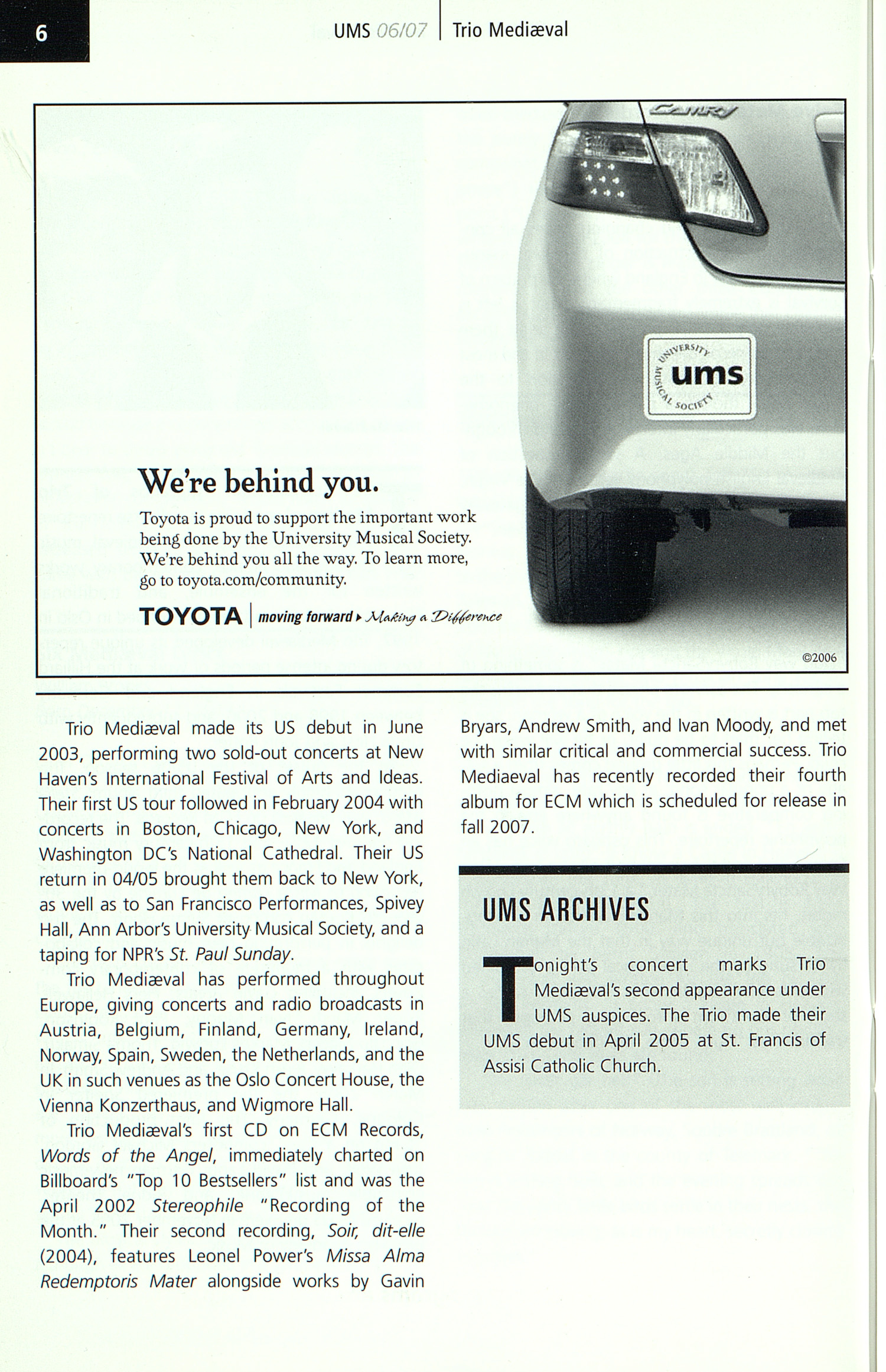 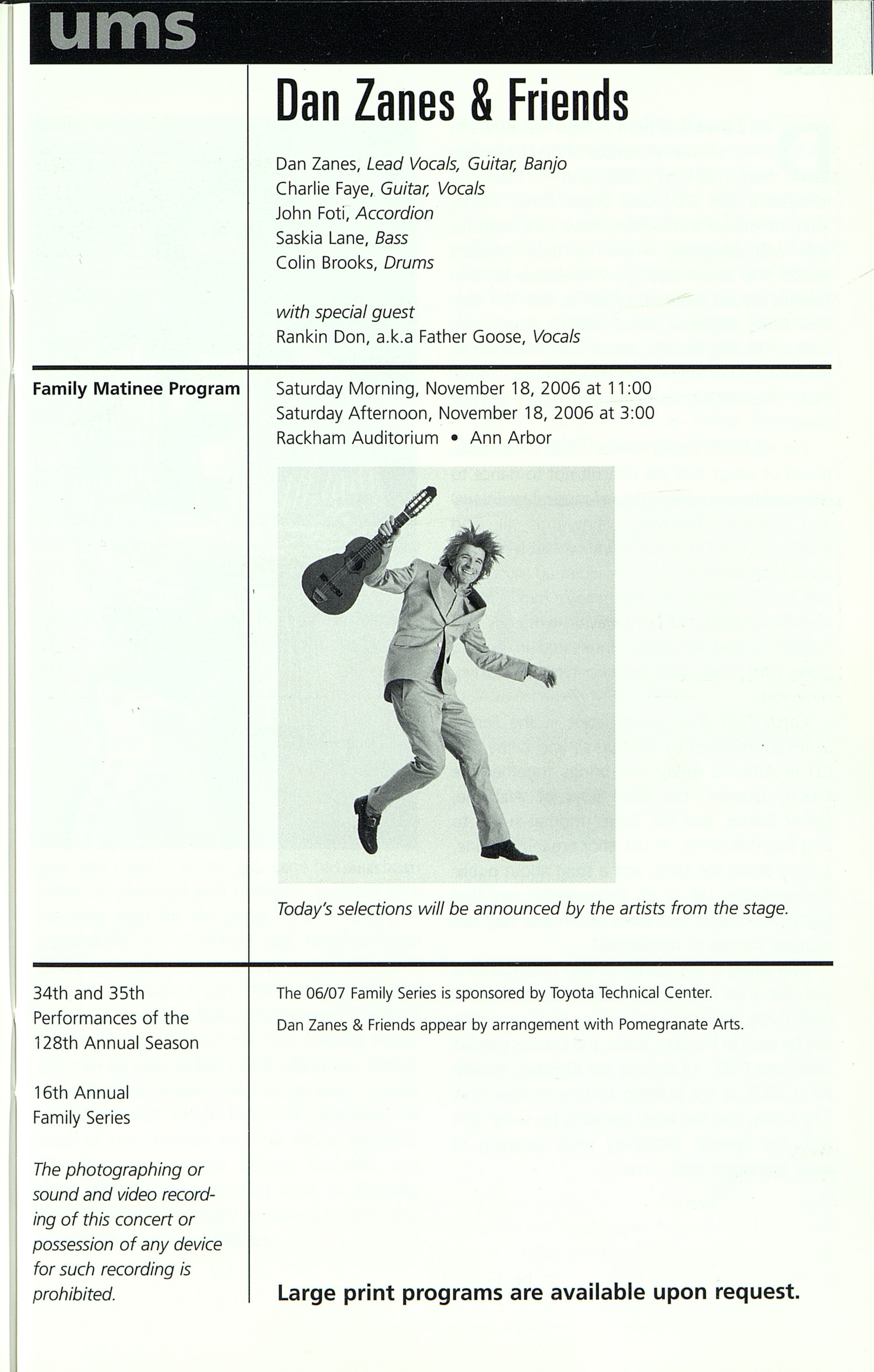 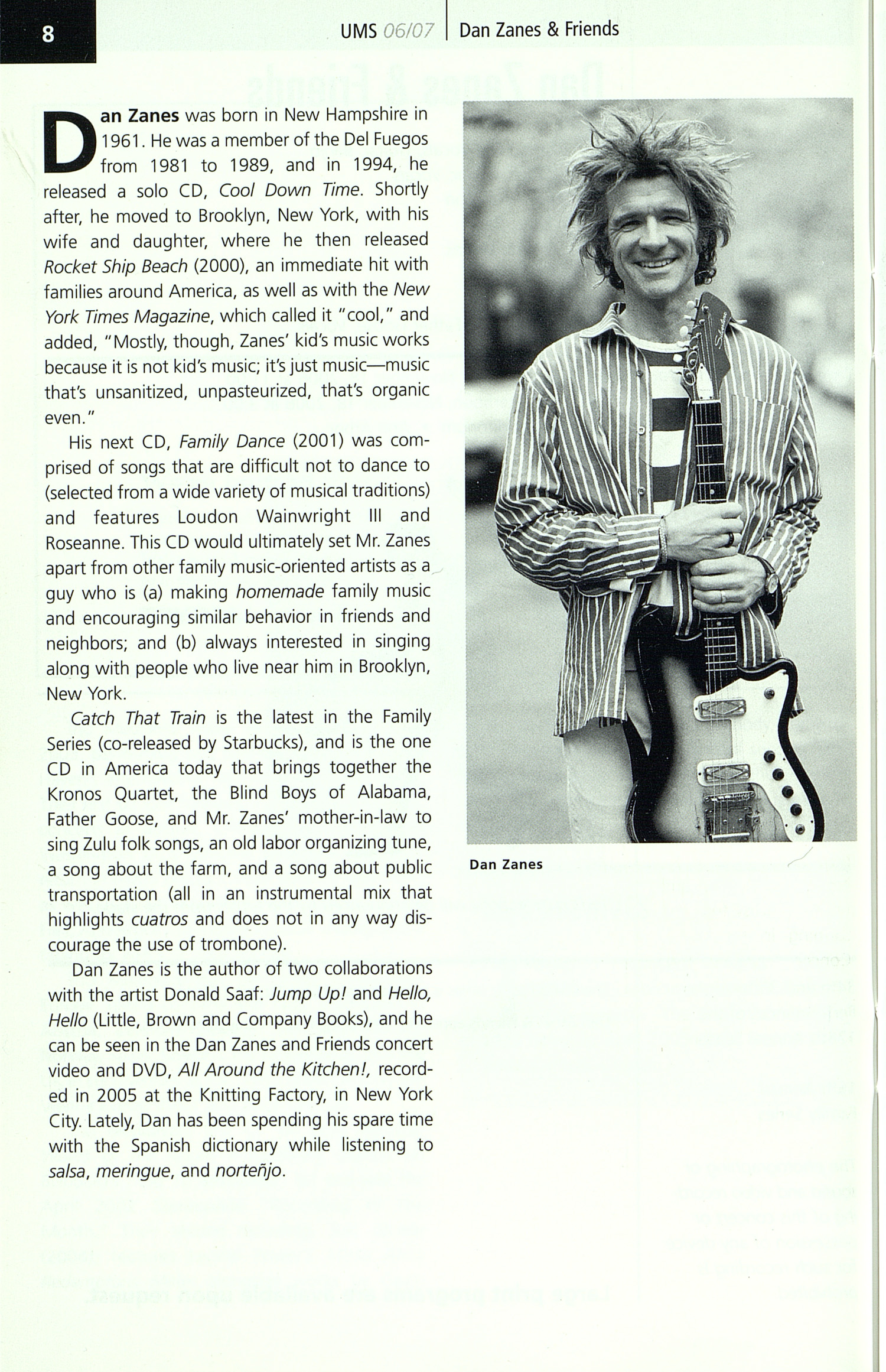 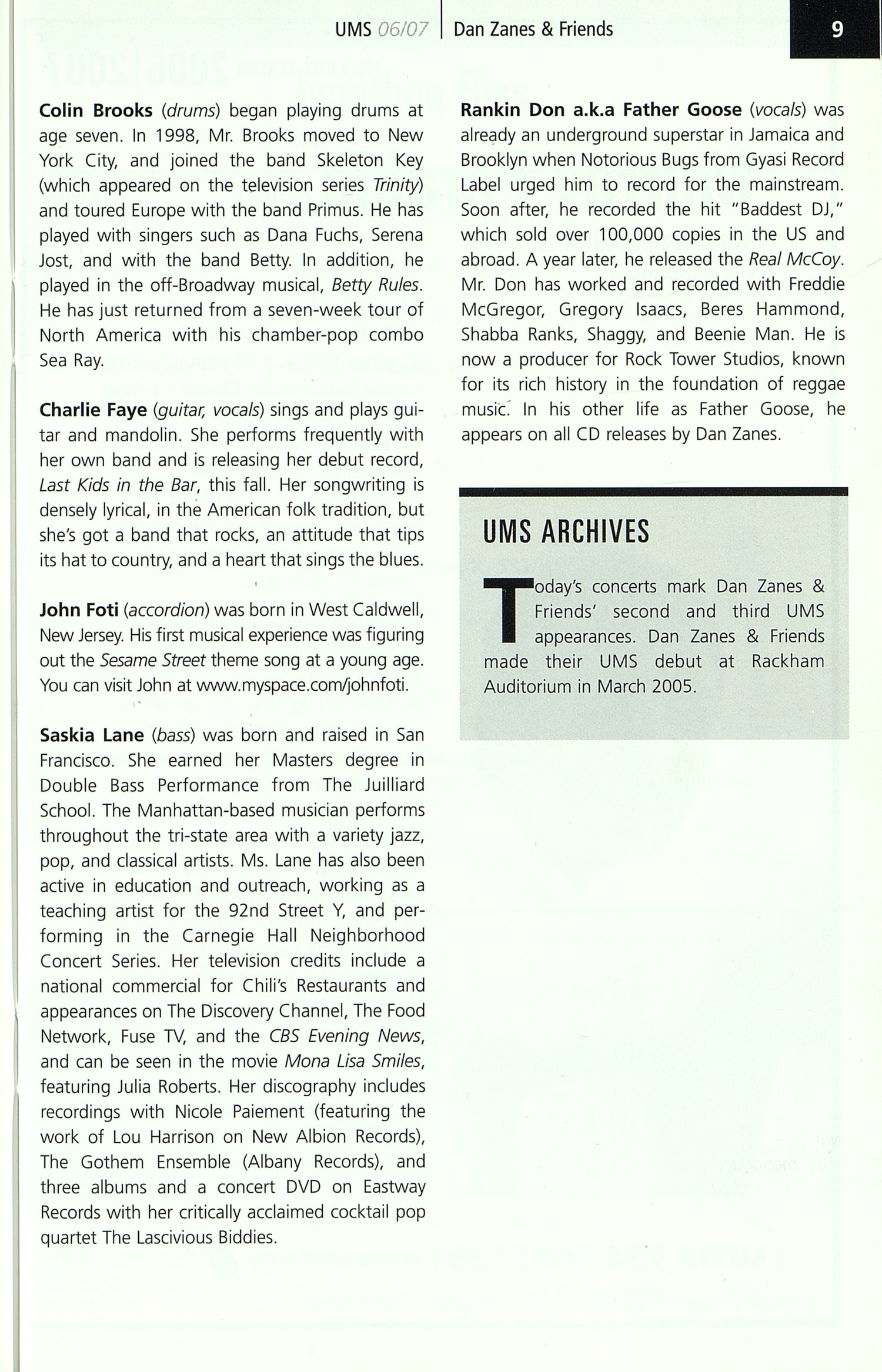 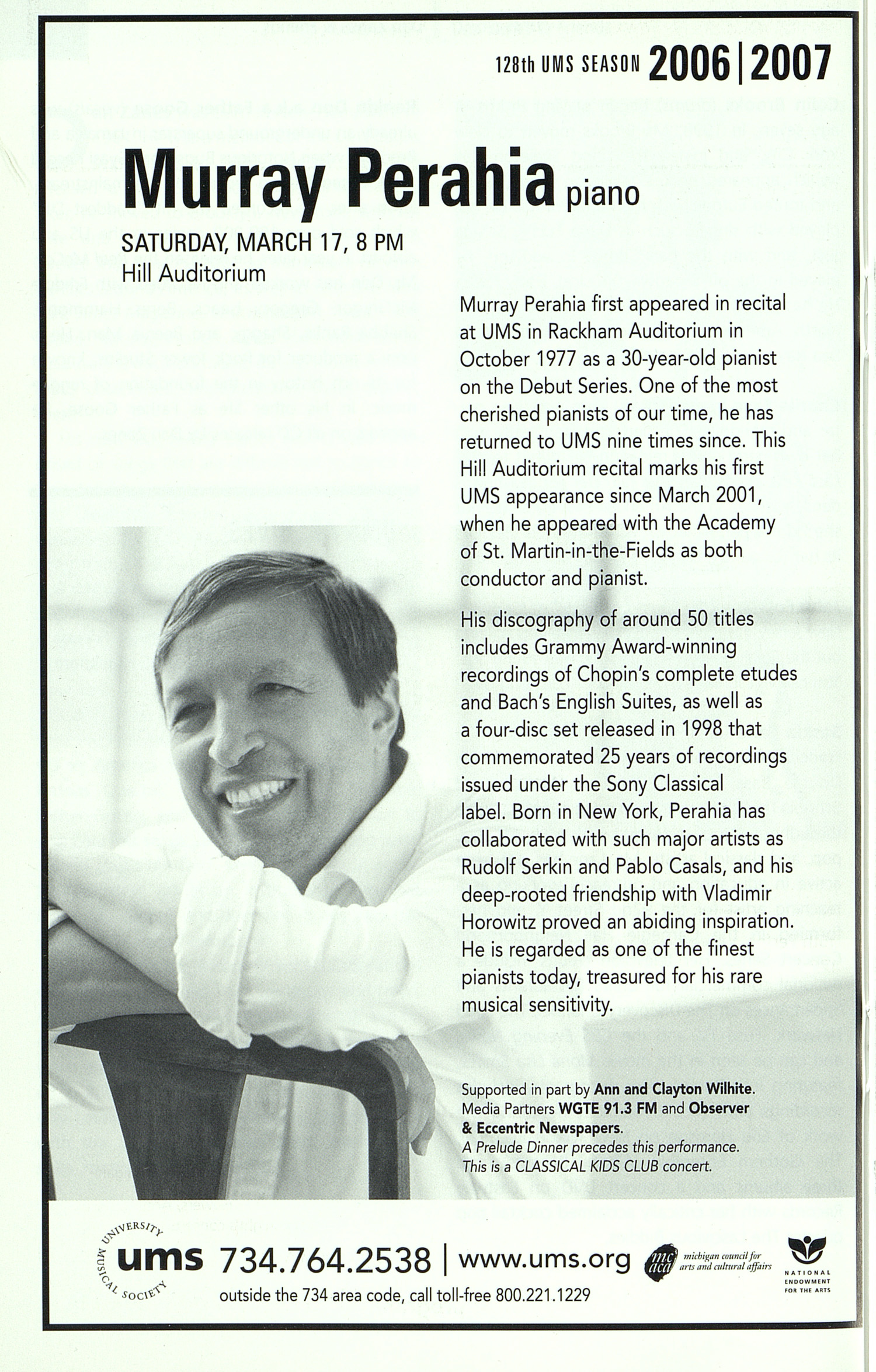 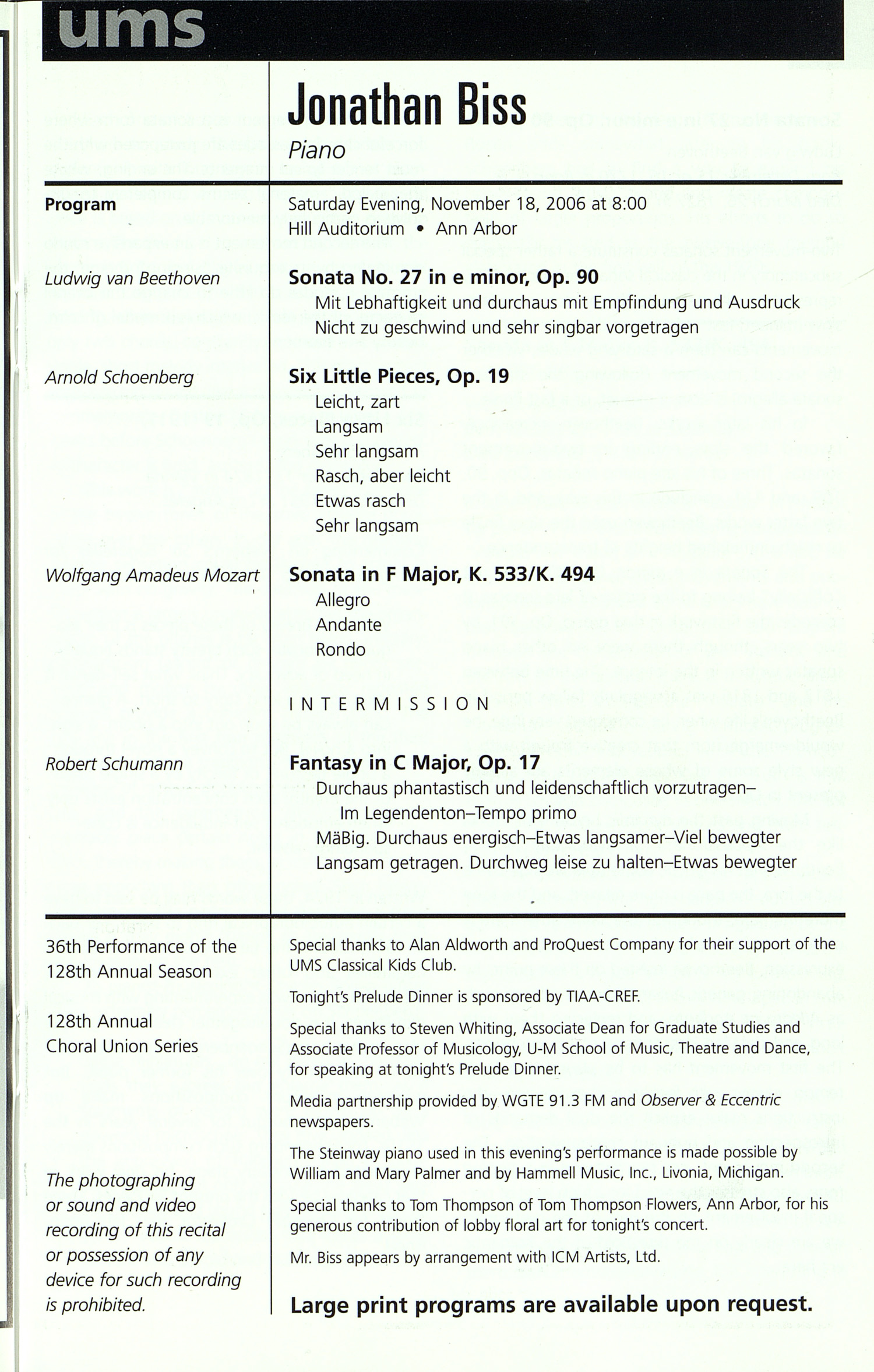 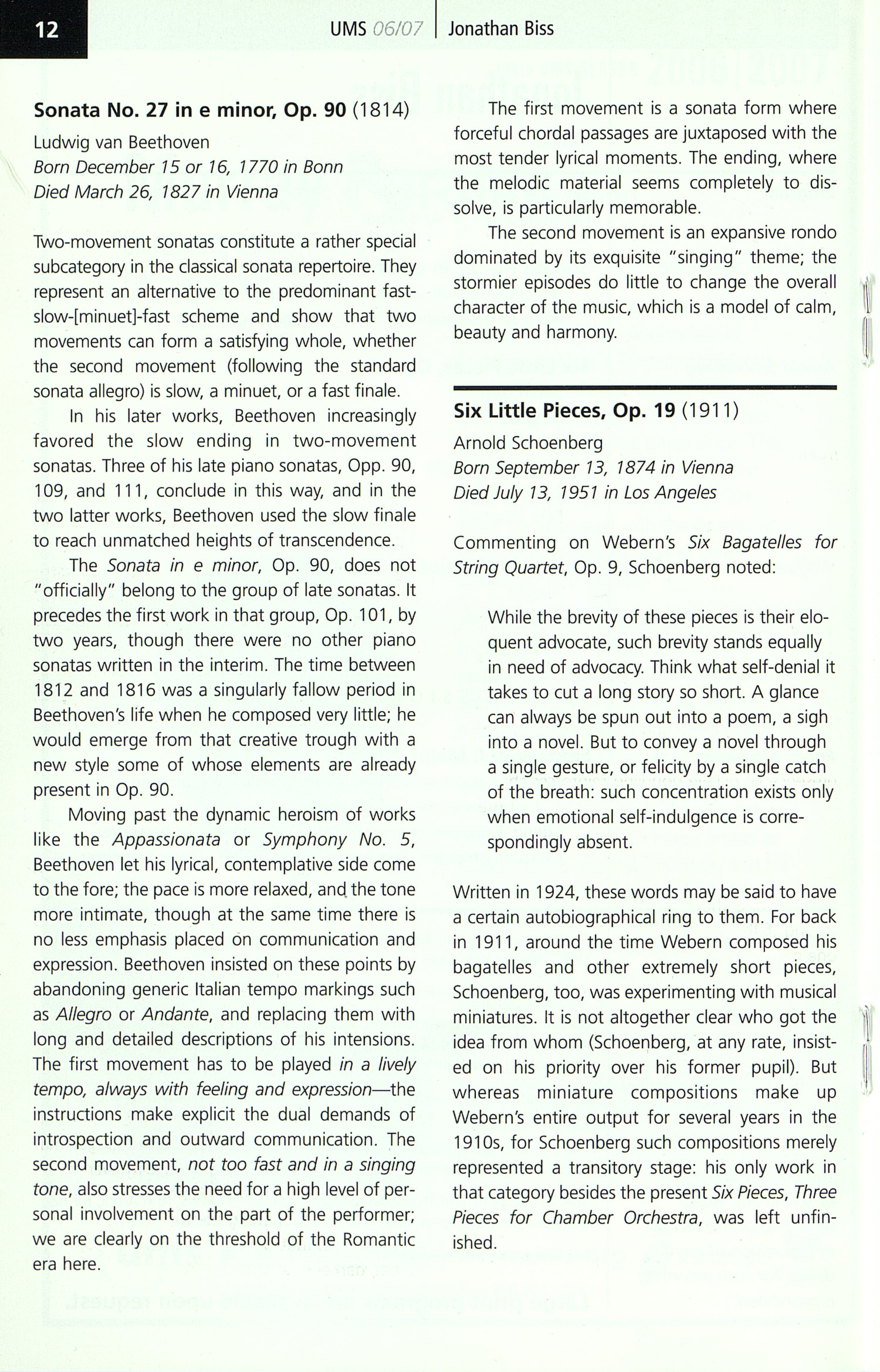 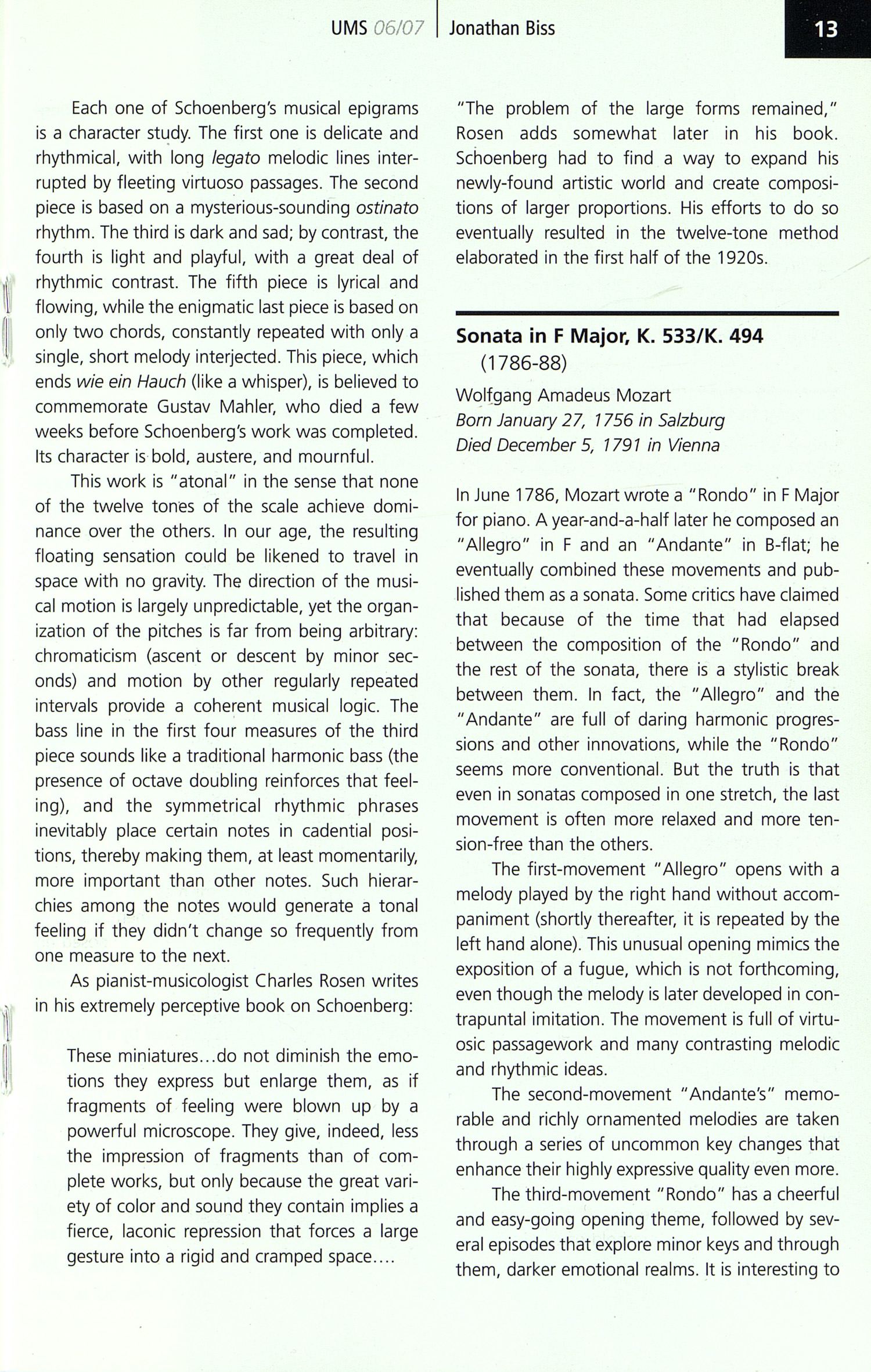 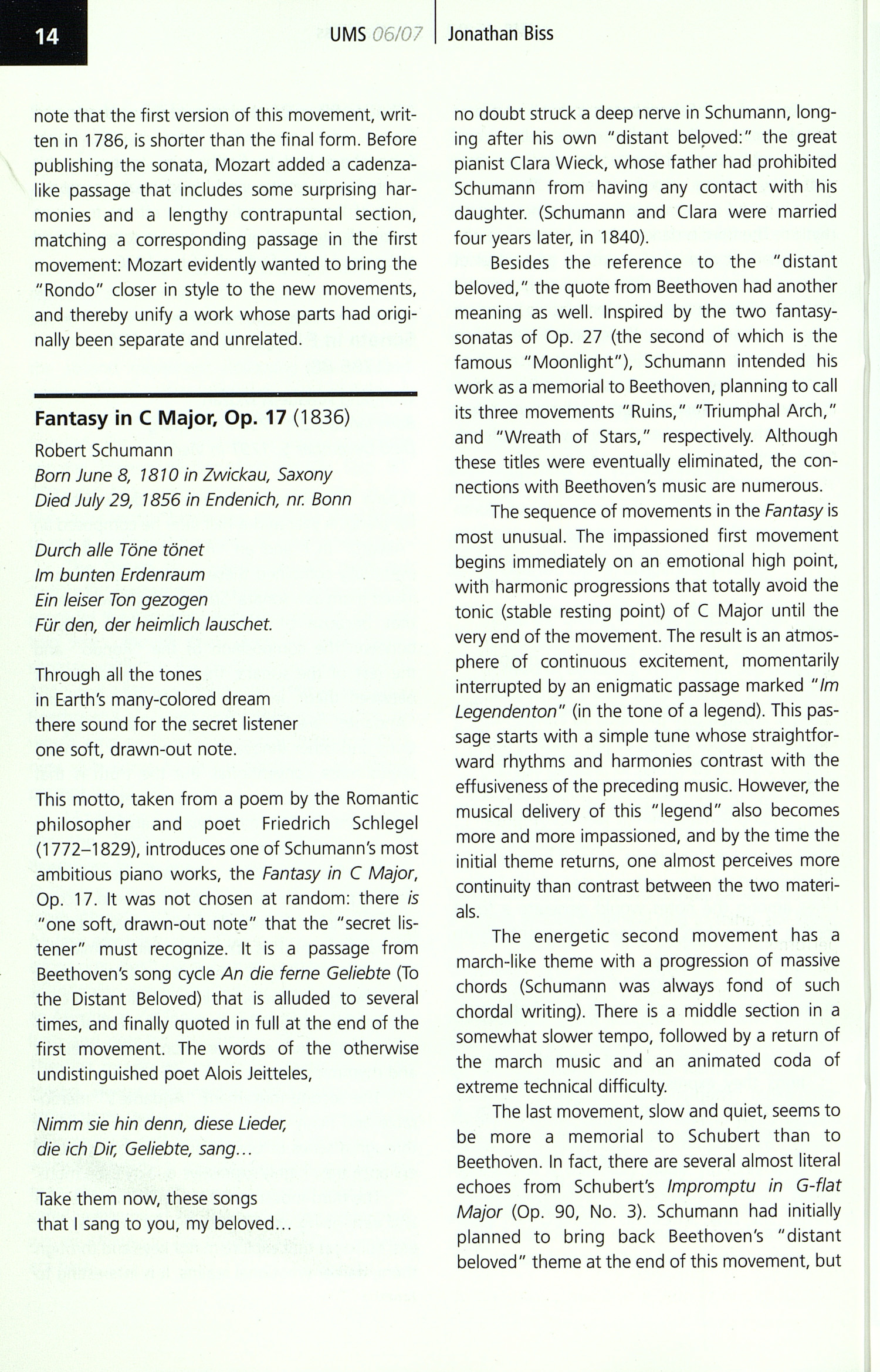 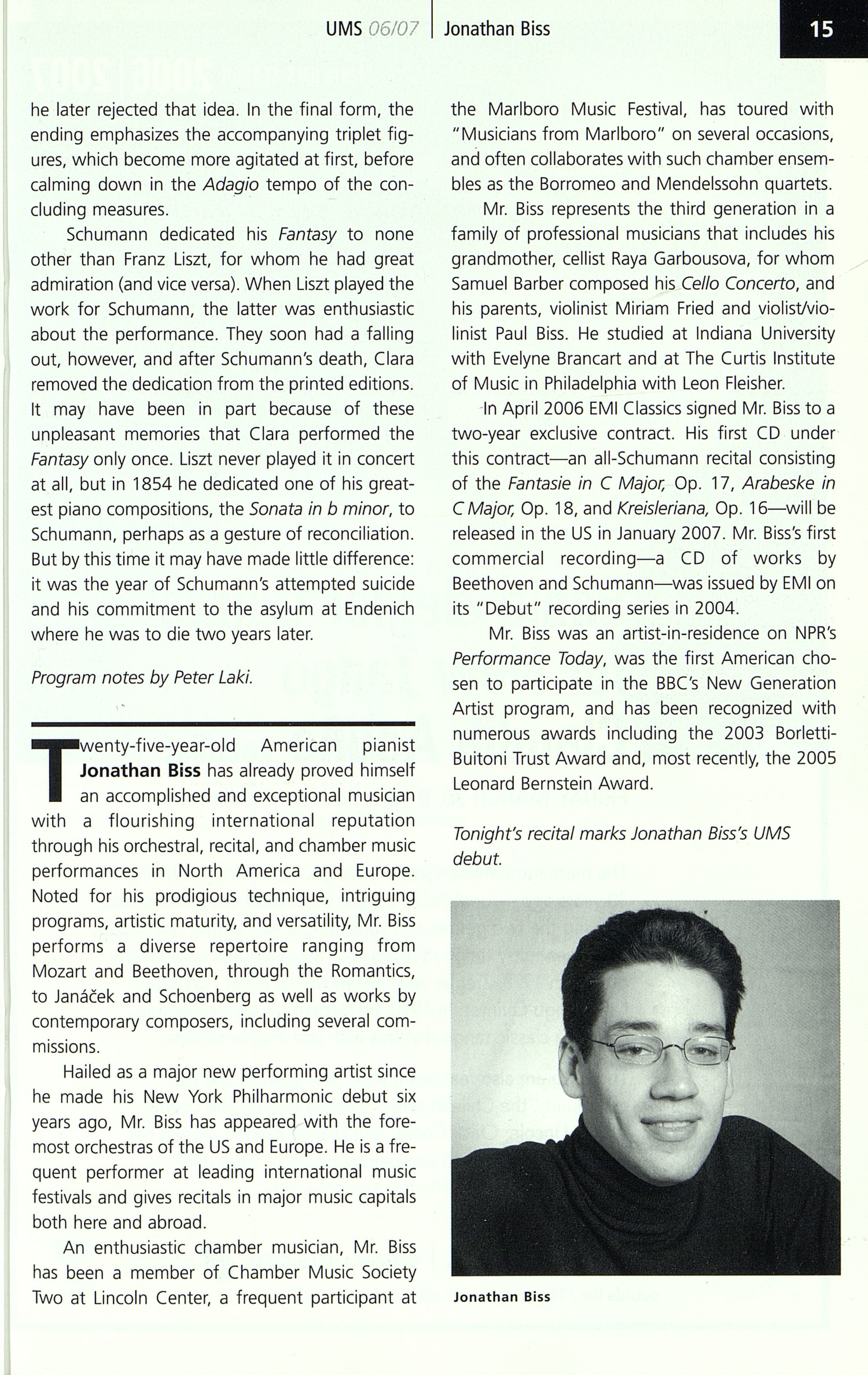 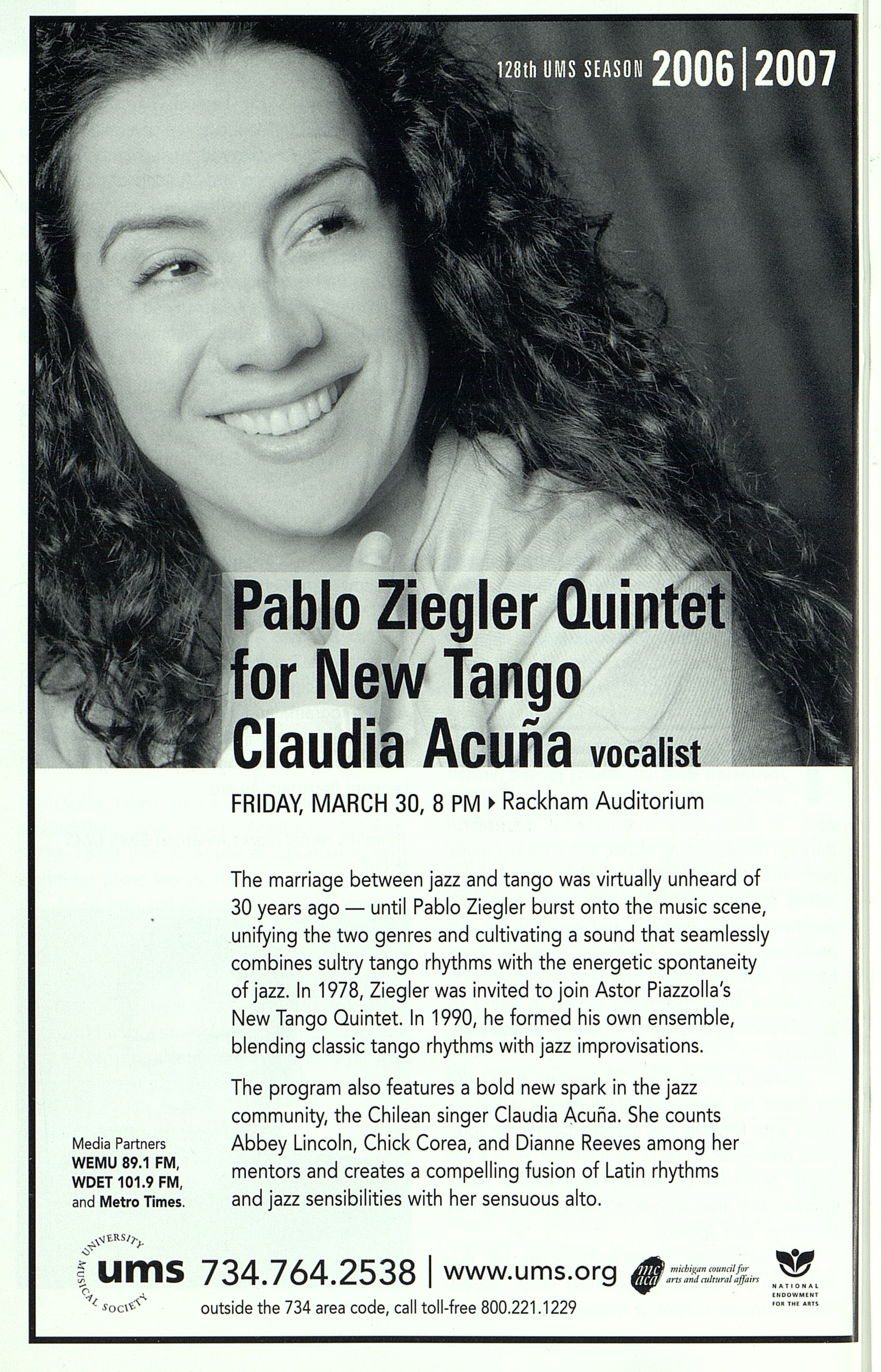 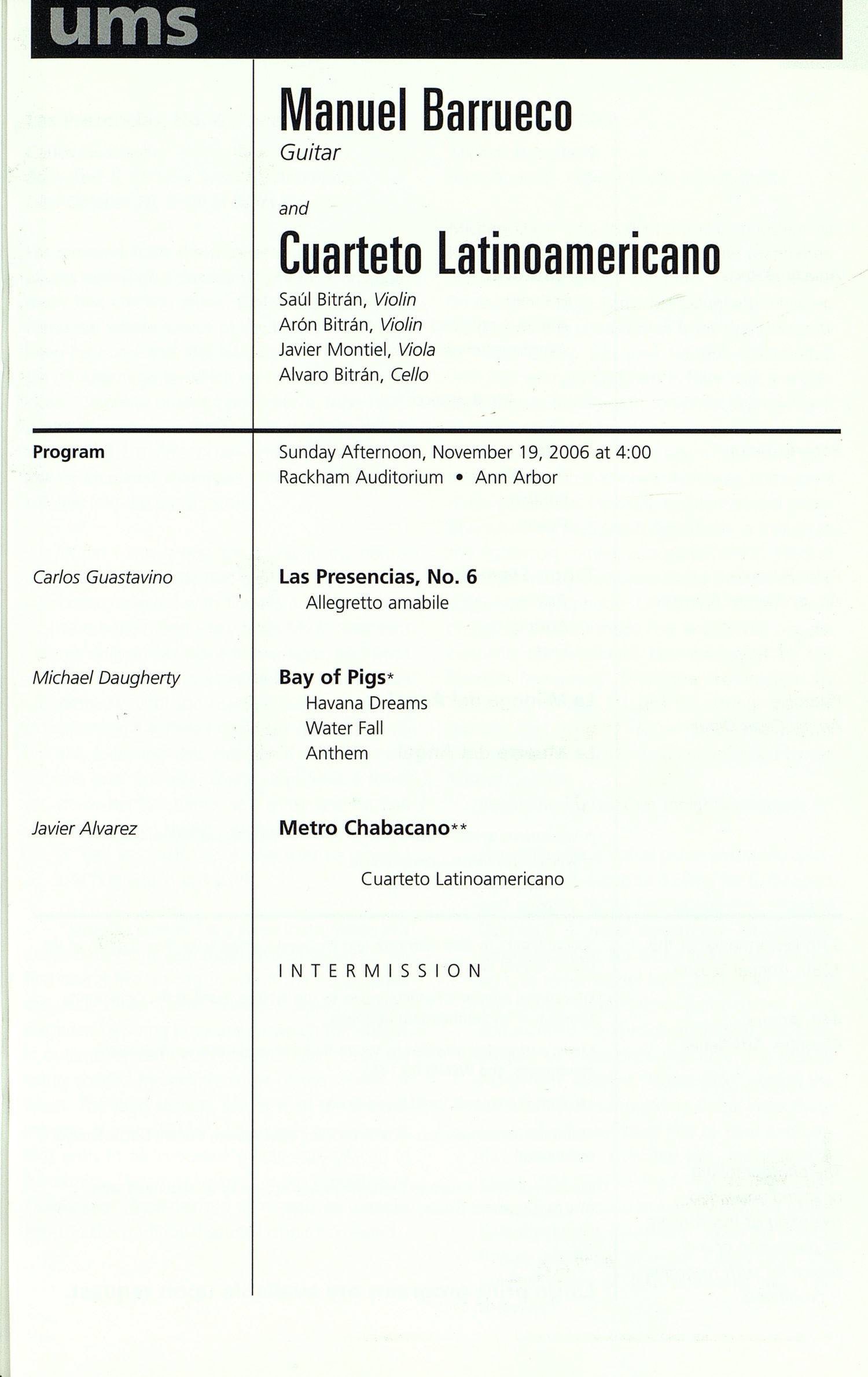 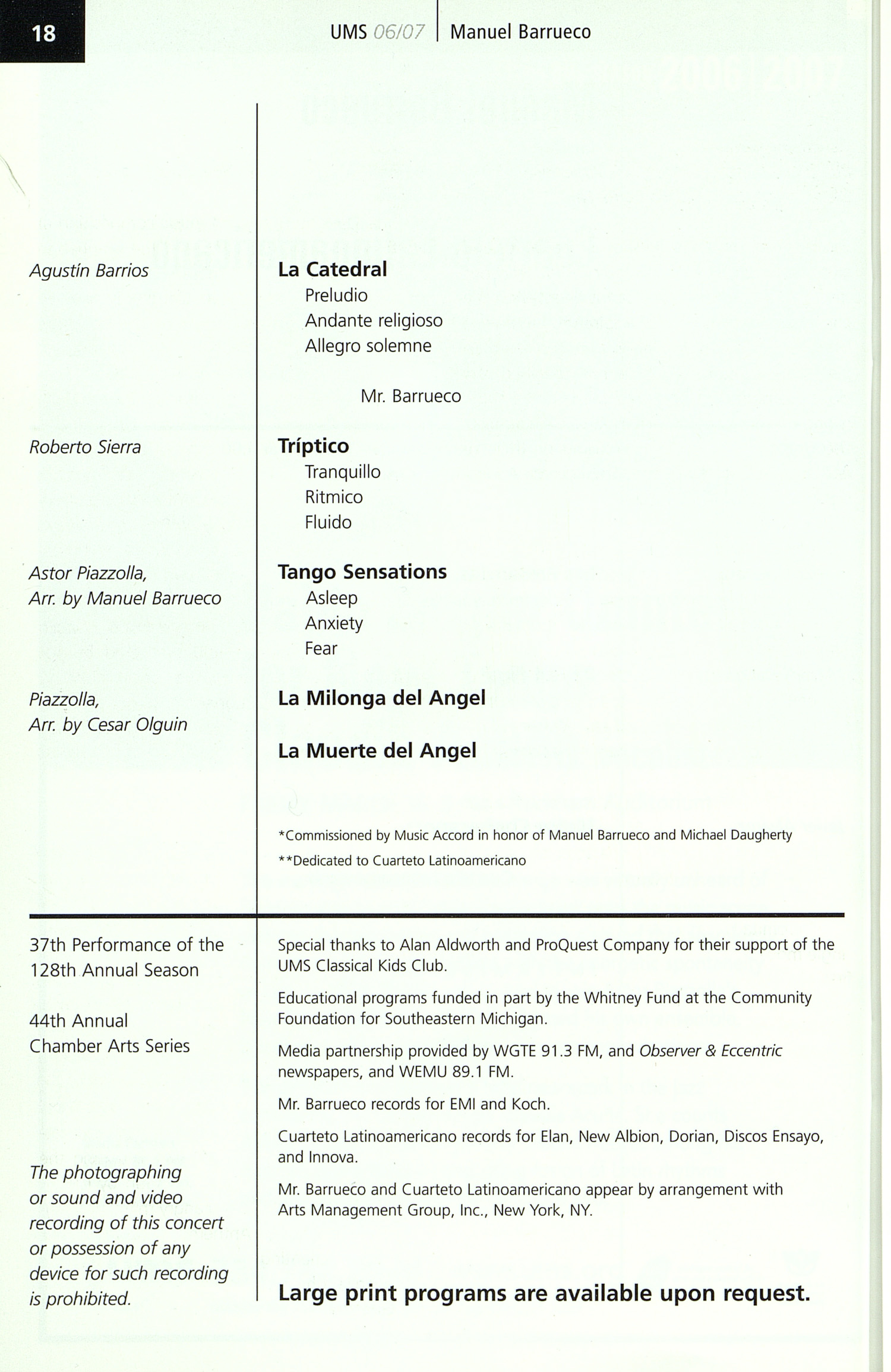 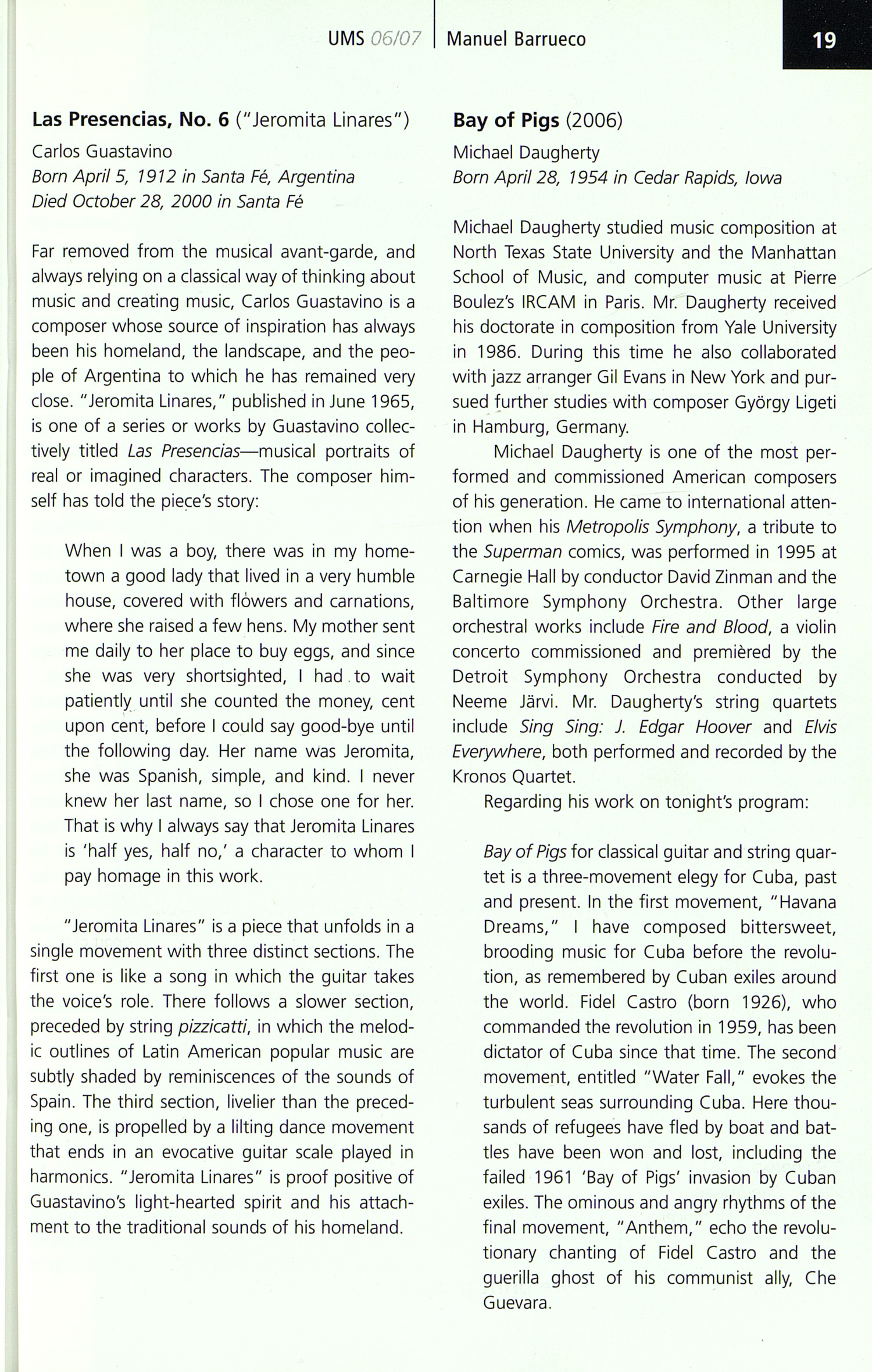 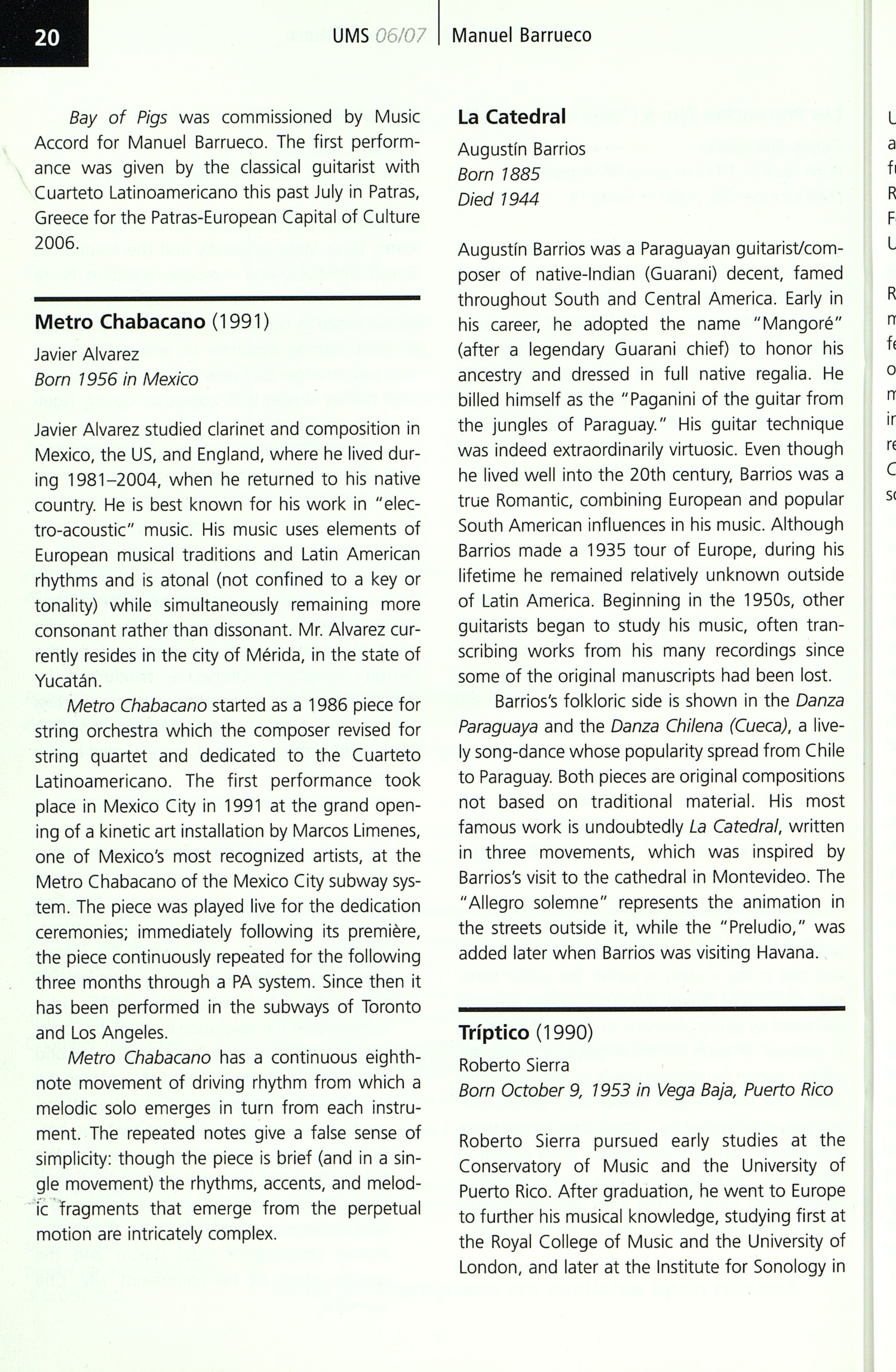 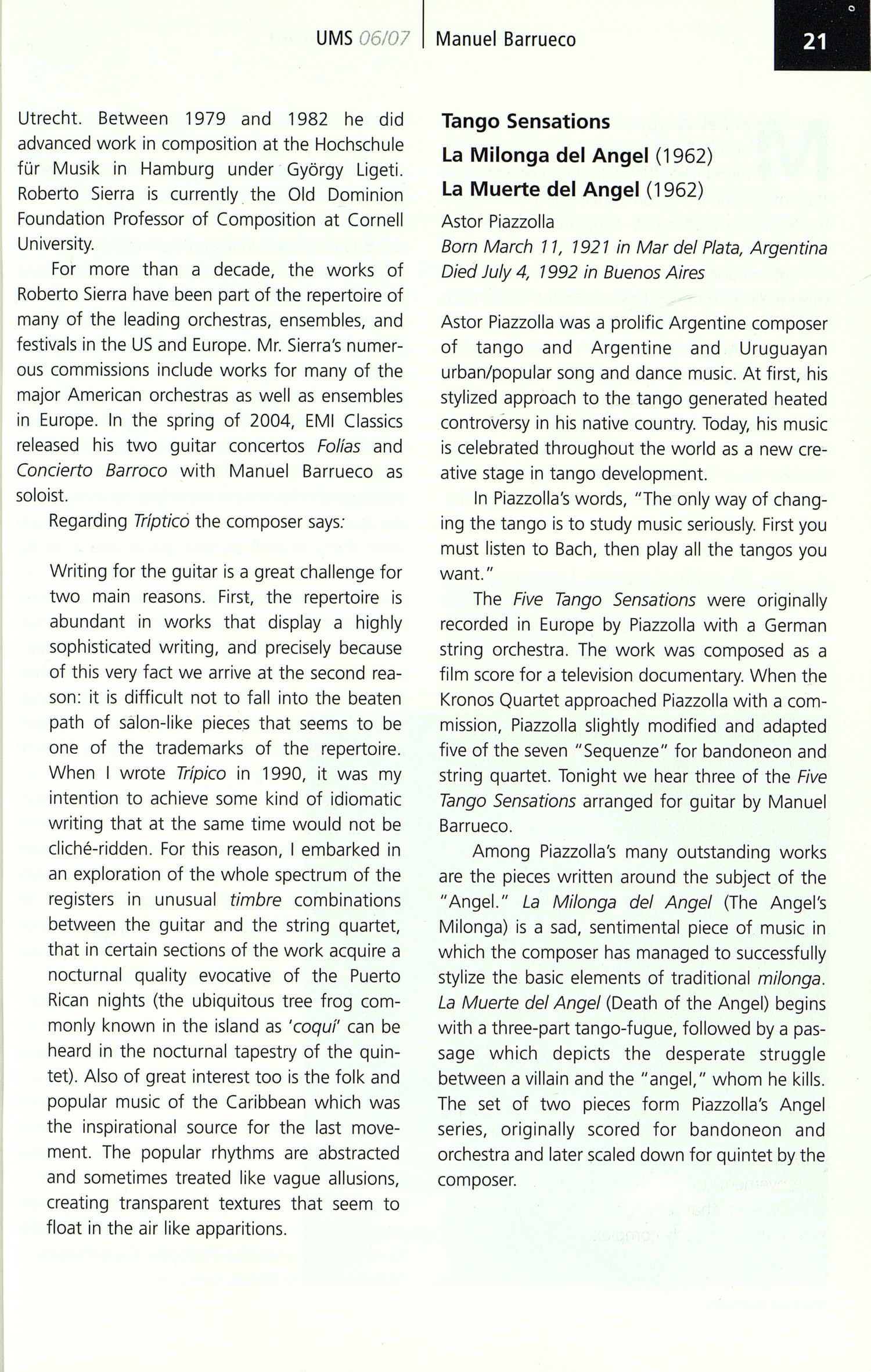 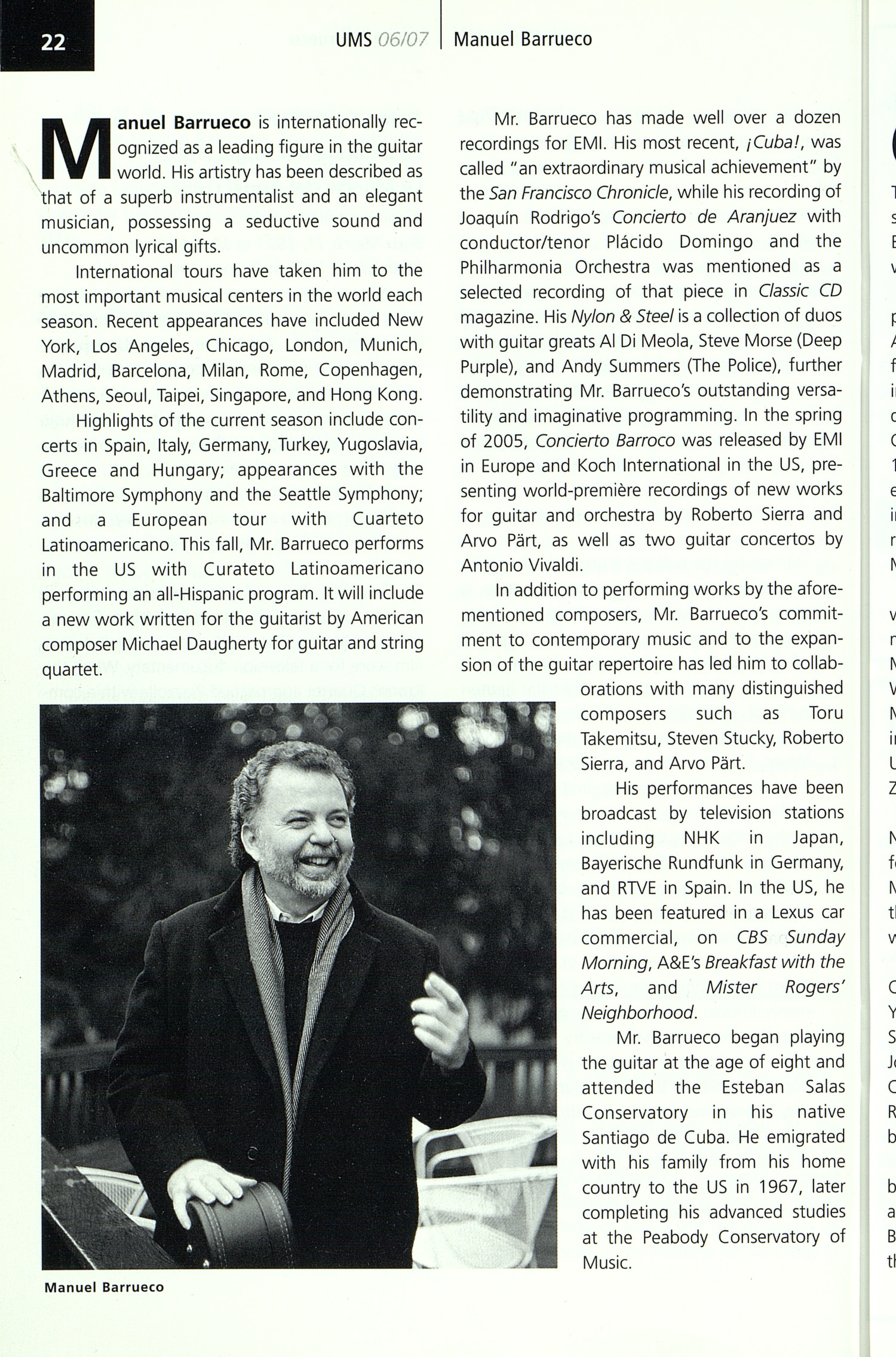 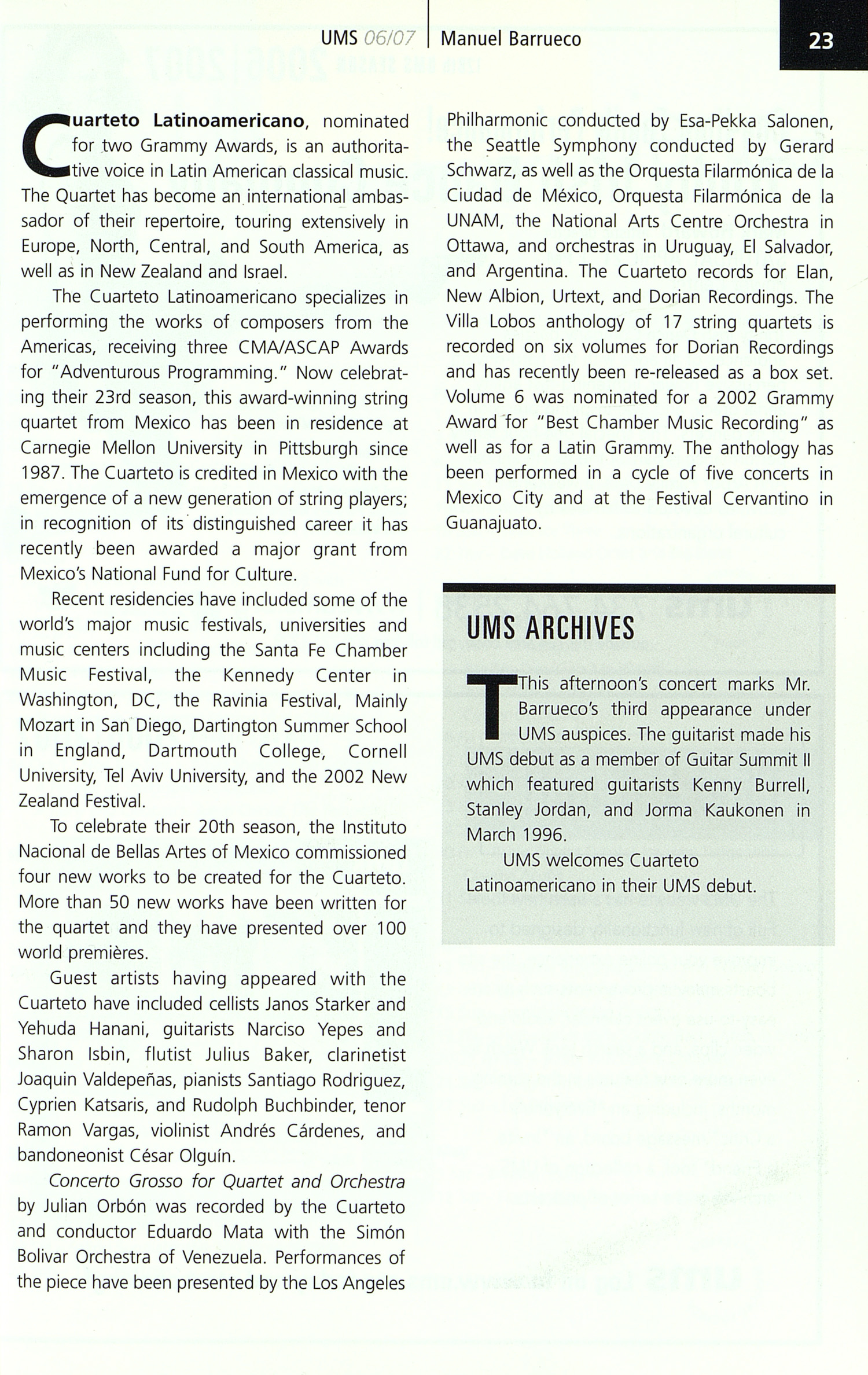 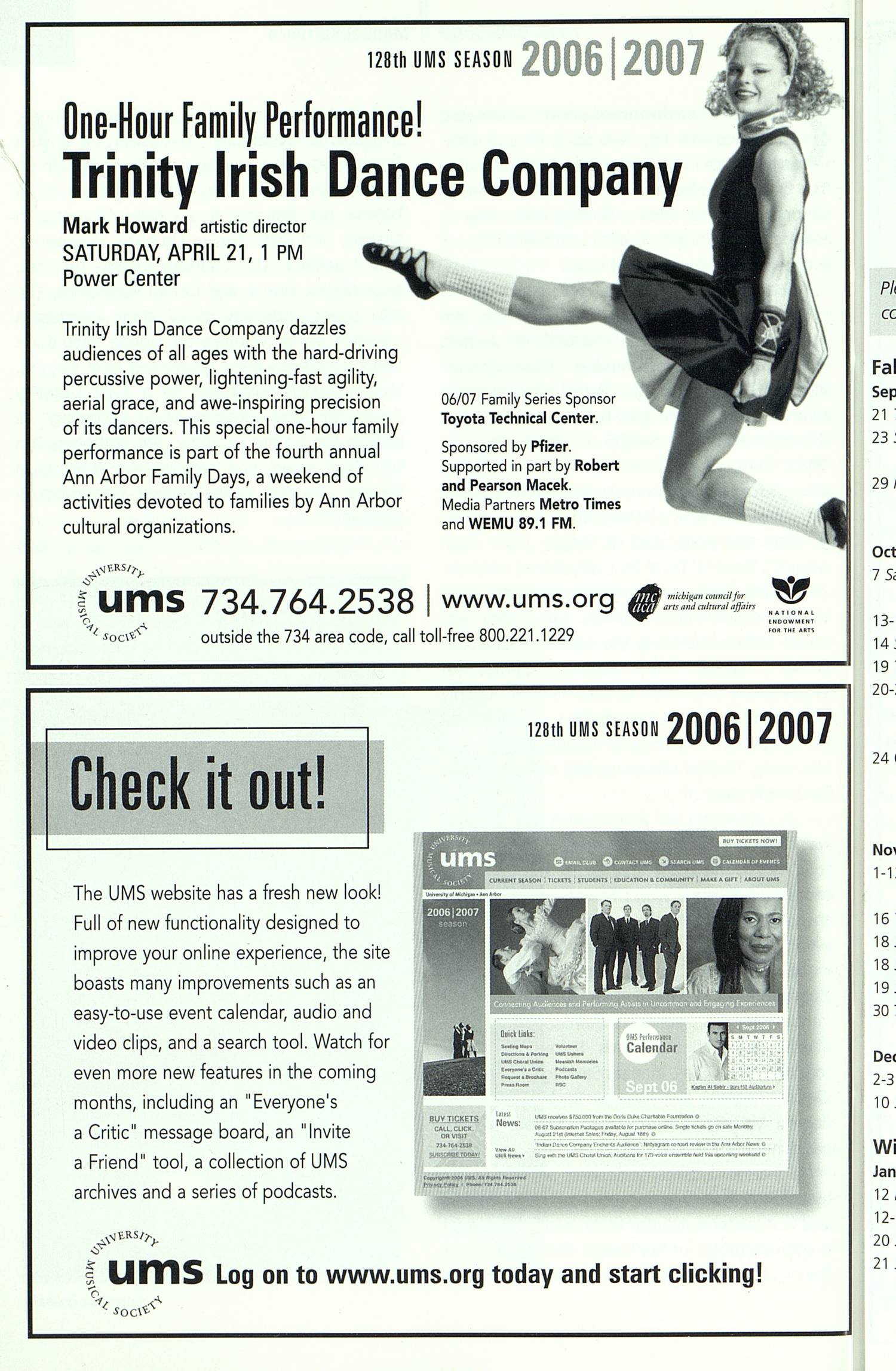 Fall 2006 Season
128th Annual Season
General Information
On-site ticket offices at performance enues open 90 minutes before each performance and remain open through ntermission of most events.
hildren of all ages are welcome at IMS Family and Youth Performances, arents are encouraged not to bring i hildren under the age of 3 to regular, ?jll-length UMS performances. All chil-ren should be able to sit quietly in ieir own seats throughout any UMS I erformance. Children unable to do so, . ong with the adult accompanying ? iem, will be asked by an usher to I ave the auditorium. Please use discre-! on in choosing to bring a child.
I emember, everyone must have a t cket, regardless of age.
While in the Auditorium
I tatting Time Every attempt is made :) begin concerts on time. Latecomers i 'e asked to wait in the lobby until ?ated by ushers at a predetermined I me in the program.
Cameras and recording equipment
re prohibited in the auditorium.
' you have a question, ask your usher, hey are here to help.
iease turn off your cellular phones nd other digital devices so that every-me may enjoy this UMS event distur-ance-free. In case of emergency, dvise your paging service of auditori?al and seat location in Ann Arbor enues, and ask them to call University ?ecurity at 734.763.1131.
i the interests of saving both dollars . id the environment, please either r 'tain this program book and return v.ith it when you attend other UMS 1 jrformances included in this edition i return it to your usher when leaving the venue.
Event Program Book
Thursday, November 16 through Sunday, November 19, 2006
Trio Mediaeval 3
Thursday, November 16, 8:00 pm St. Francis of Assisi Catholic Church
Dan Zanes & Friends 7
Catch That Train!
Saturday, November 18, 11:00 am Saturday, November 18, 3:00 pm Rackham Auditorium
Jonathan Biss 11
Saturday, November 18, 8:00 pm Hill Auditorium
Cuarteto Latinoamericano 17
Manuel Barrueco
Sunday, November 19, 4:00 pm Rackham Auditorium
T
hank you for coming to this University Musical Society event. We are delighted to see you here.
Over the course of the past year, you may have noticed a new description of UMS in our brochures and other print materials. Rather than using the nouns "music, dance, and theater," we have redefined our organization as one that con?nects audiences and performing artists in uncom?mon and engaging experiences.
Why uncommon Because what we do is not replicated anywhere else in the country. One need only witness the recent concerts by Alice Coltrane (performed in only three US cities), the Kirov Orchestra (performed in only two US cities), and the Royal Shakespeare Company (performed only in Ann Arbor) to understand the uncommon nature of what we do. But beyond exclusivity, UMS is uncommon in the very best sense of the word: the "out of the ordinary" experiences that the artists on our stages provide are truly remark?able opportunities for audiences to explore, reconnect, investigate, and probe.
Why engaging Again, one need only look at the events of the past month to realize the incred?ible commitment UMS audiences have to making their experience positive. For the Kirov Orchestra, some 350 university students participated in an "Arts and Eats" program, where they ate a free pizza dinner before the concert, heard a graduate student speak about Shostakovich, and then enjoyed the performance with a new set of eyes and ears. This program is being repeated for Jonathan Biss and on a monthly basis throughout the season.
The RSC residency events drew record atten?dance and even standing-room-only crowds. How thrilling to see so many people wanting to enhance their enjoyment of the theatrical plays through attendance at these events. We may pro?vide the artistic and educational programming, but you, the audience, are the critical factor in what makes each event come alive.
While we can't promise that every UMS event will be a transformative, life-changing event for every single person in attendance, we do believe that the performances we present on our stages make a palpable difference in people's lives. Sometimes that change is noticed immediately, as so many ticket buyers commented after the Kirov Shostakovich cycle. Sometimes, as a speaker at one of the RSC events noted, that change takes 10 years to take hold.
The concerts over the course of this very busy weekend promise to deliver uncommon and engaging experiences that will be remembered for years to come. From the sublime beauty of Trio Mediaeval to the wacky Dan Zanes, you are creat?ing memories that will far outlive the time spent in the concert hall.
We hope that you find your experience enrich?ing, rewarding, and worthwhile.
@@@@Sara Billmann
UMS Director of Marketing and Communications
Warmly,