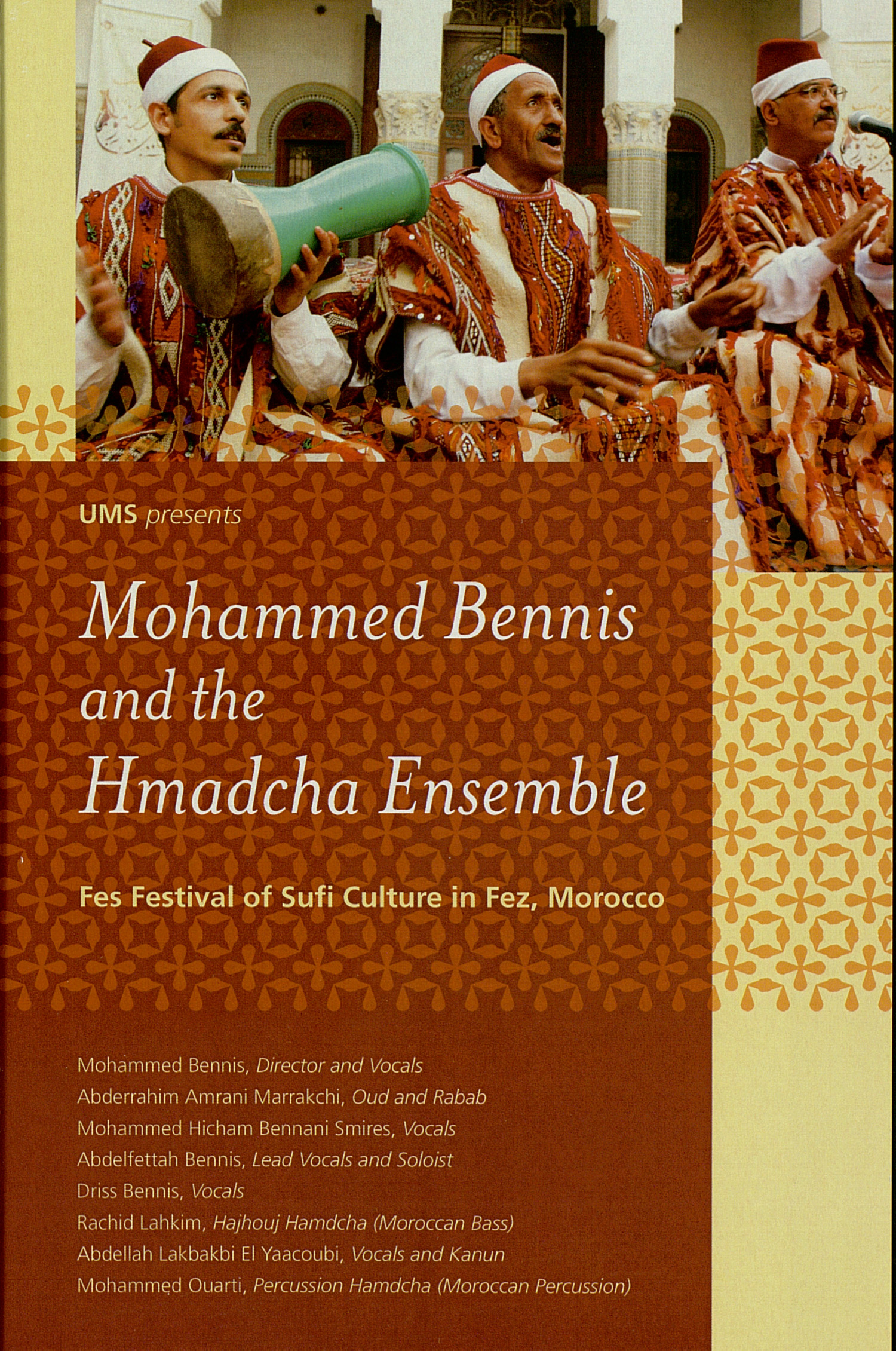 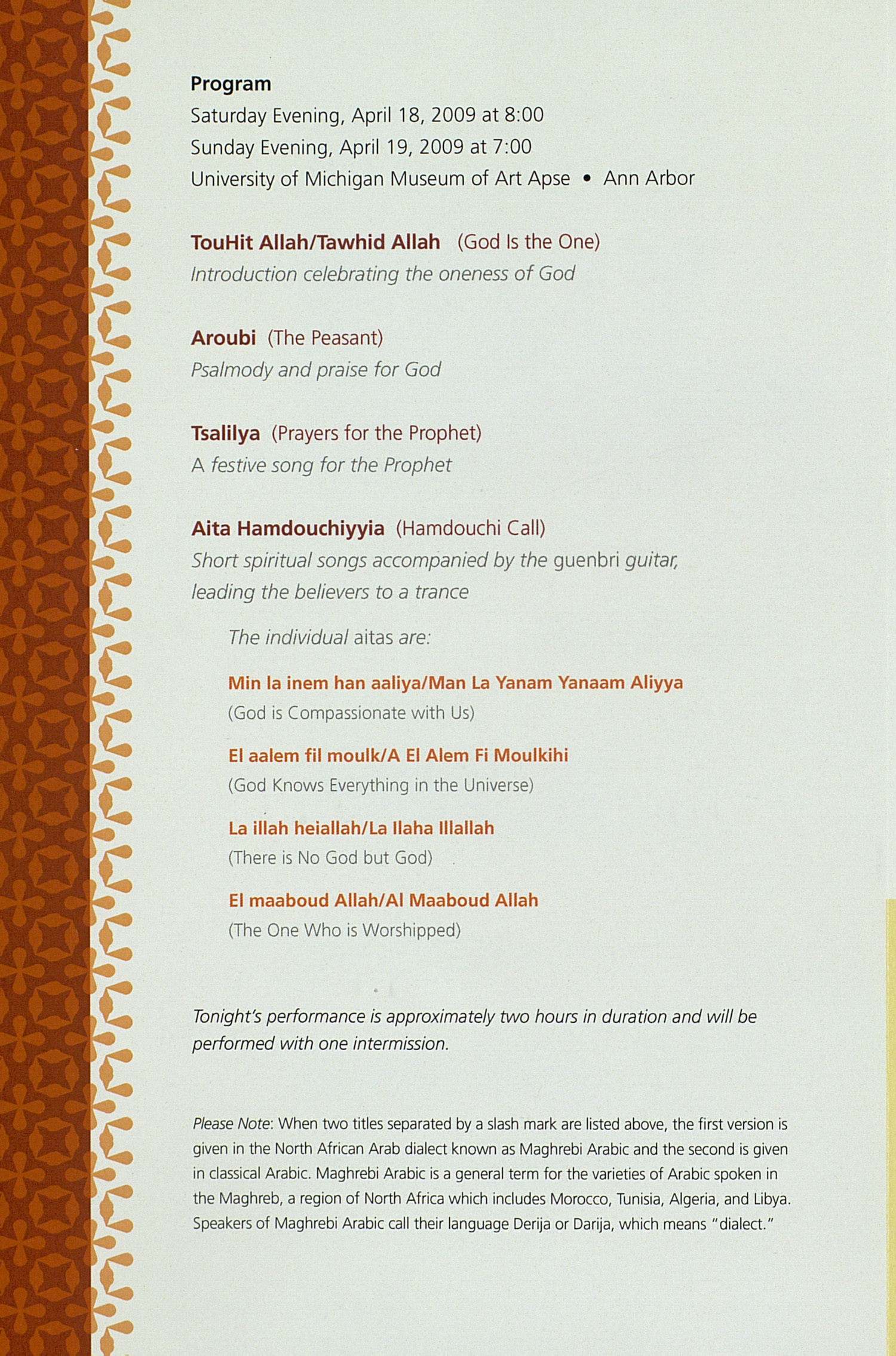 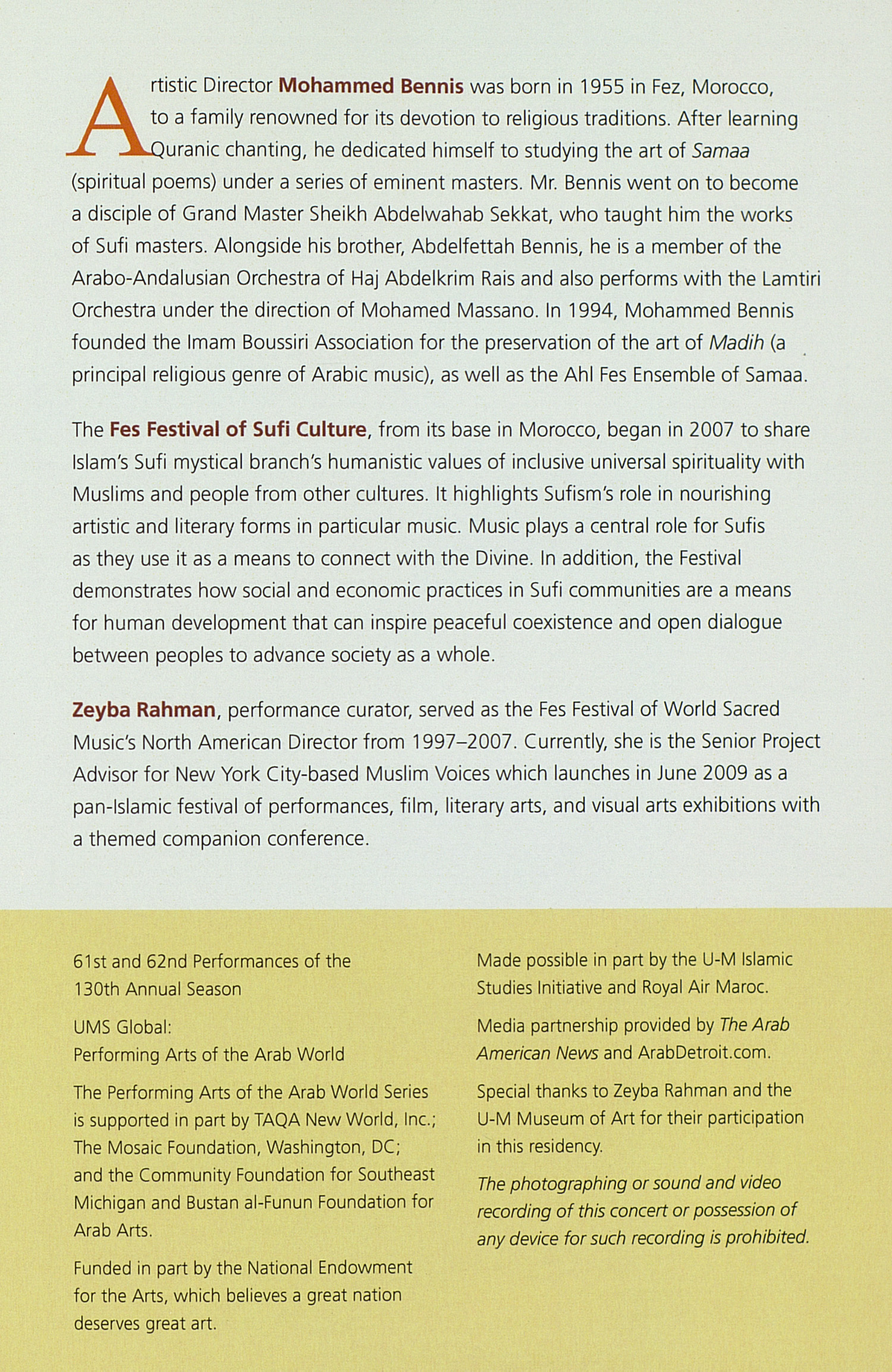 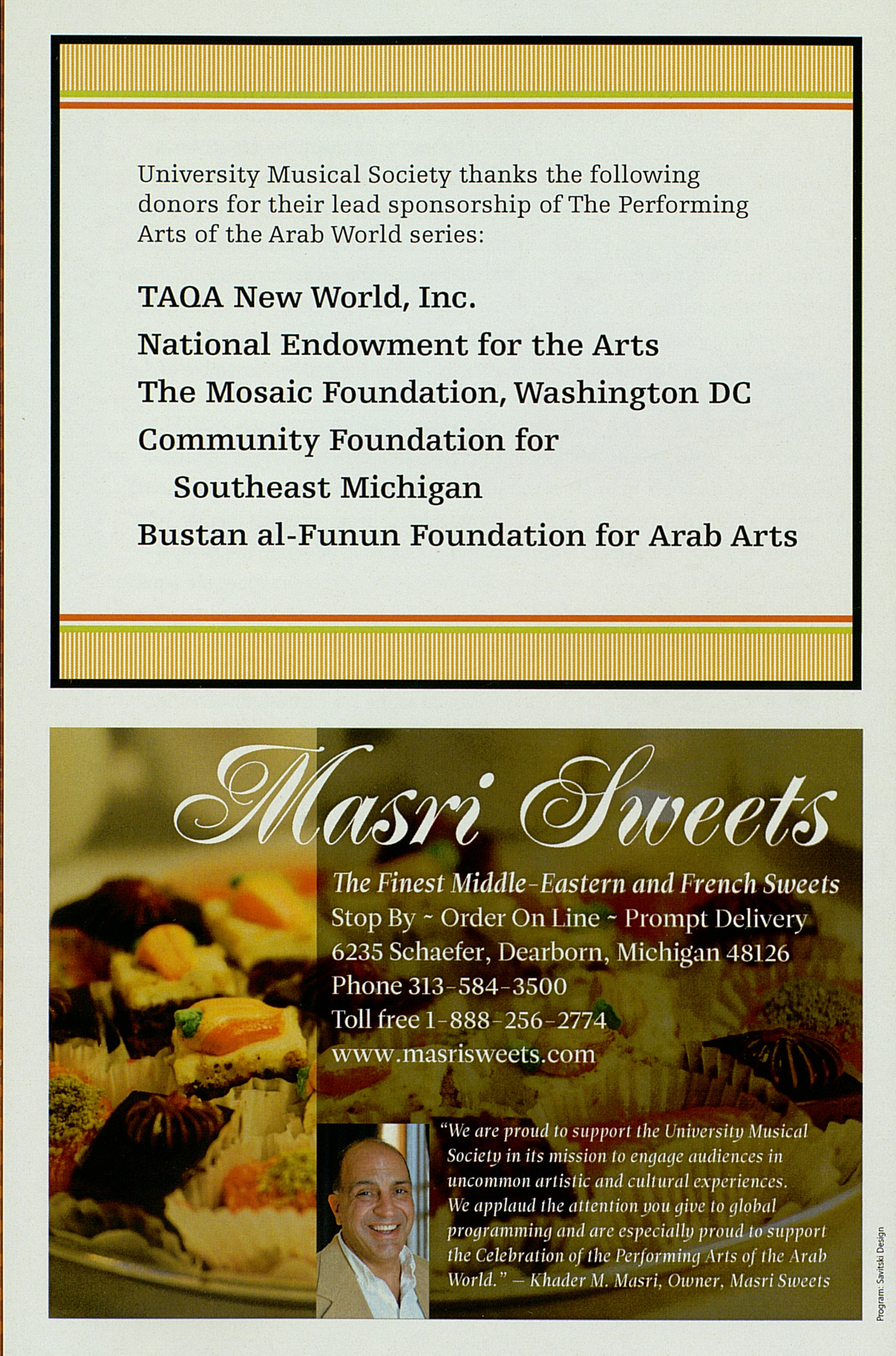 UMS presents
Mohammed Bennis and the Hmadcha Ensemble
Fes Festival of Sufi Culture in Fez, Morocco
Mohammed Bennis, Director and Vocals
Abderrahim Amrani Marrakchi, Oud and Rabab
Mohammed Hicham Bennani Smires, Vocals
Abdelfettah Bennis, Lead Vocals and Soloist
Driss Bennis, Vocals
Rachid Lahkim, Hajhouj Hamdcha (Moroccan Bass)
Abdellah Lakbakbi El Yaacoubi, Vocals and Kanun
Mohammed Ouarti, Percussion Hamdcha (Moroccan Percussion)
Program
Saturday Evening, April 18, 2009 at 8:00
Sunday Evening, April 19, 2009 at 7:00
University of Michigan Museum of Art Apse Ann Arbor
TouHit AllahTawhid Allah (God Is the One) Introduction celebrating the oneness of God
Aroubi (The Peasant) Psalmody and praise for God
Tsalilya (Prayers for the Prophet) A festive song for the Prophet
Aita Hamdouchiyyia (Hamdouchi Call)
Short spiritual songs accompanied by the guenbri guitar,
leading the believers to a trance
The individual aitas are:
Min la inem han aaliyaMan La Yanam Yanaam Aliyya
(God is Compassionate with Us)
El aalem fil moulkA El Alem Fi Moulkihi
(God Knows Everything in the Universe)
La illah heiallahLa llaha Illallah
(There is No God but God)
El maaboud AllahAI Maaboud Allah
(The One Who is Worshipped)
Tonight's performance is approximately two hours in duration and will be performed with one intermission.
Please Note: When two titles separated by a slash mark are listed above, the first version is given in the North African Arab dialect known as Maghrebi Arabic and the second is given in classical Arabic. Maghrebi Arabic is a general term for the varieties of Arabic spoken in the Maghreb, a region of North Africa which includes Morocco, Tunisia, Algeria, and Libya. Speakers of Maghrebi Arabic call their language Derija or Darija, which means "dialect."
Artistic Director Mohammed Bennis was born in 1955 in Fez, Morocco, to a family renowned for its devotion to religious traditions. After learning Quranic chanting, he dedicated himself to studying the art of Samaa (spiritual poems) under a series of eminent masters. Mr. Bennis went on to become a disciple of Grand Master Sheikh Abdelwahab Sekkat, who taught him the works of Sufi masters. Alongside his brother, Abdelfettah Bennis, he is a member of the AraboAndalusian Orchestra of Haj Abdelkrim Rais and also performs with the Lamtiri Orchestra under the direction of Mohamed Massano. In 1994, Mohammed Bennis founded the Imam Boussiri Association for the preservation of the art of Madih (a principal religious genre of Arabic music), as well as the Ahl Fes Ensemble of Samaa.
The Fes Festival of Sufi Culture, from its base in Morocco, began in 2007 to share Islam's Sufi mystical branch's humanistic values of inclusive universal spirituality with Muslims and people from other cultures. It highlights Sufism's role in nourishing artistic and literary forms in particular music. Music plays a central role for Sufis as they use it as a means to connect with the Divine. In addition, the Festival demonstrates how social and economic practices in Sufi communities are a means for human development that can inspire peaceful coexistence and open dialogue between peoples to advance society as a whole.
Zeyba Rahman, performance curator, served as the Fes Festival of World Sacred Music's North American Director from 19972007. Currently, she is the Senior Project Advisor for New York Citybased Muslim Voices which launches in June 2009 as a panIslamic festival of performances, film, literary arts, and visual arts exhibitions with a themed companion conference.
61st and 62nd Performances of the 130th Annual Season
UMS Global:
Performing Arts of the Arab World
The Performing Arts of the Arab World Series is supported in part by TAQA New World, Inc.; The Mosaic Foundation, Washington, DC; and the Community Foundation for Southeast Michigan and Bustan alFunun Foundation for Arab Arts.
Funded in part by the National Endowment for the Arts, which believes a great nation deserves great art.
Made possible in part by the UM Islamic Studies Initiative and Royal Air Maroc.
Media partnership provided by The Arab American News and ArabDetroit.com.
Special thanks to Zeyba Rahman and the UM Museum of Art for their participation in this residency.
The photographing or sound and video recording of this concert or possession of any device for such recording is prohibited.