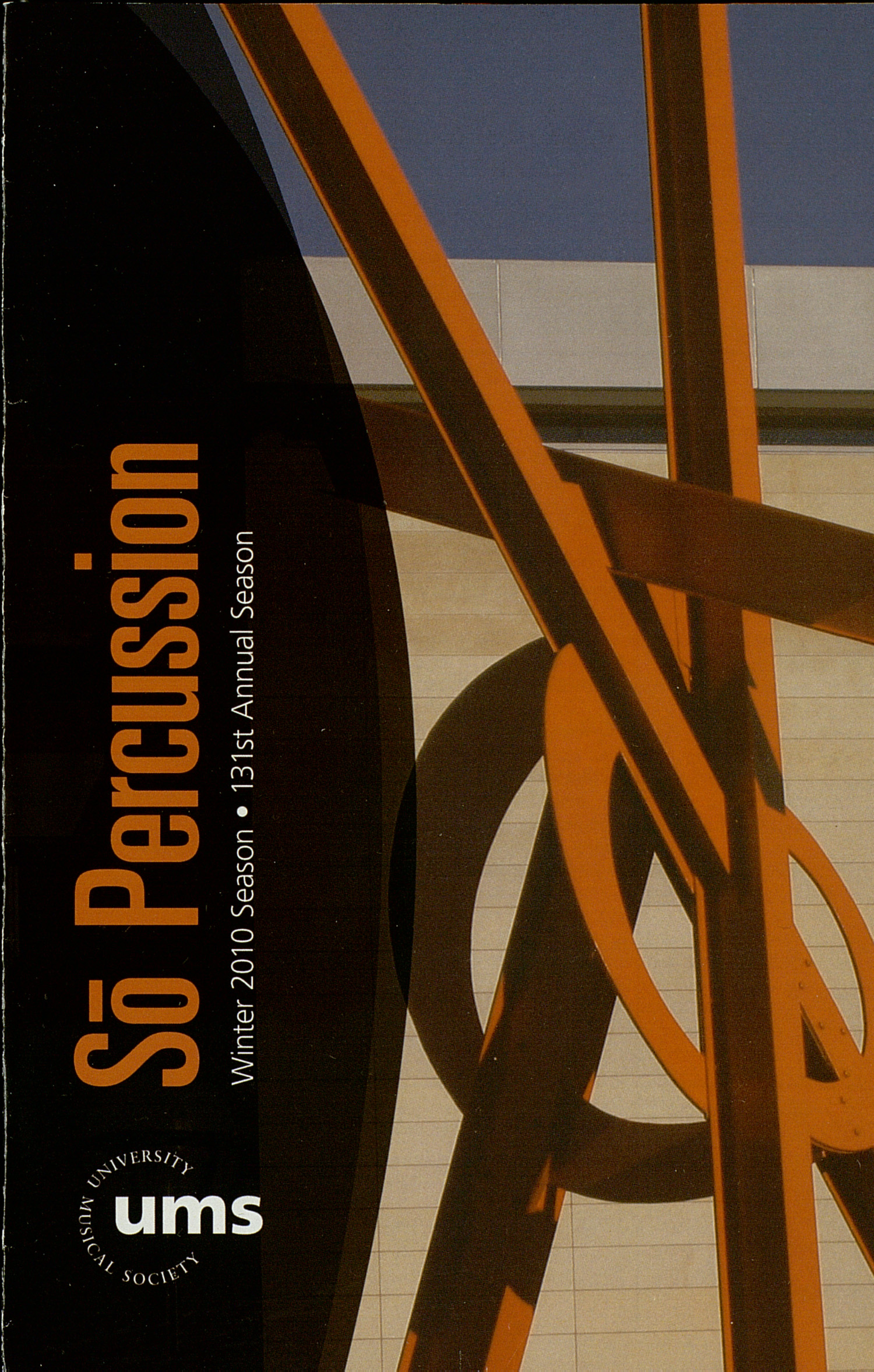 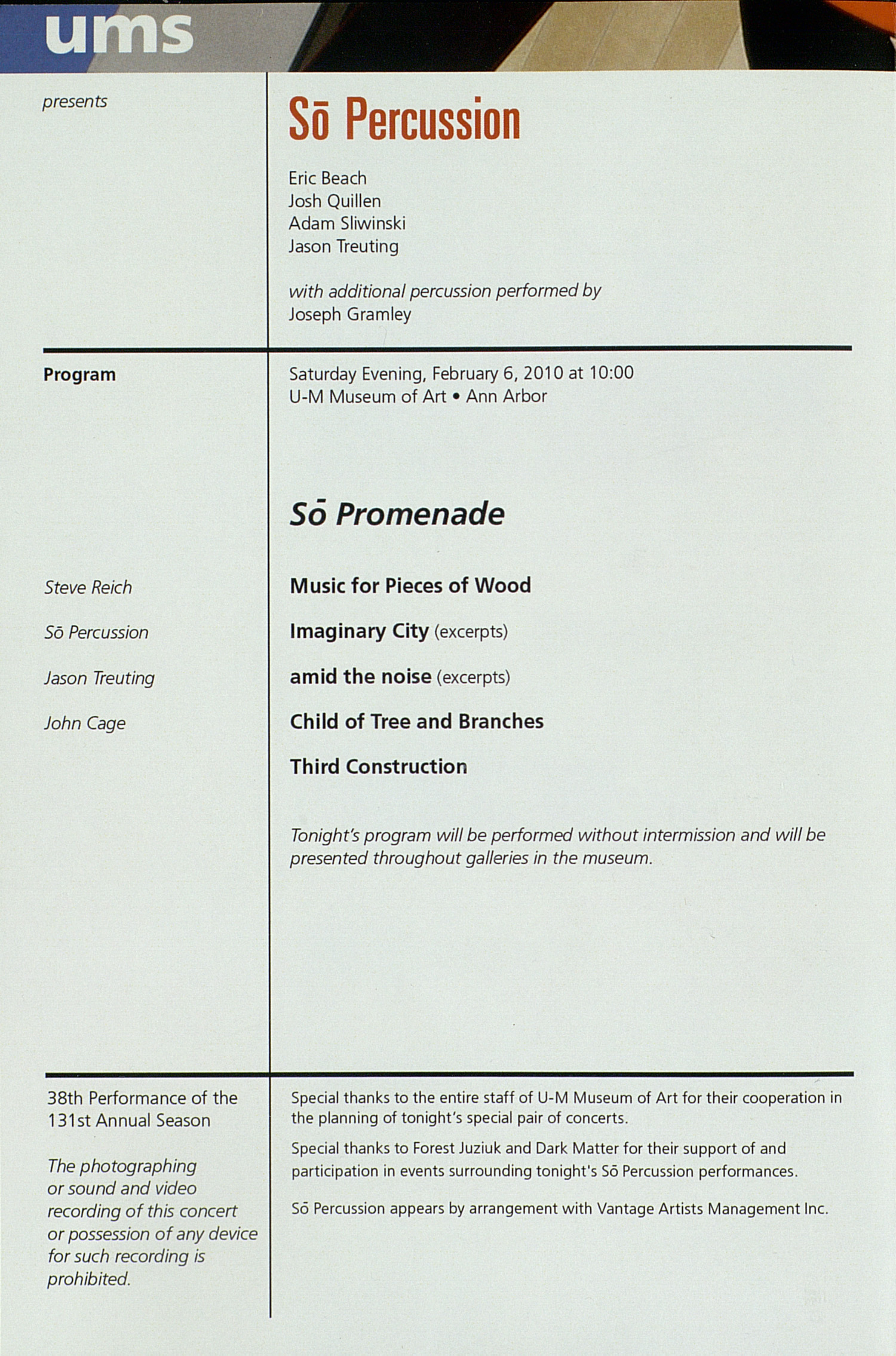 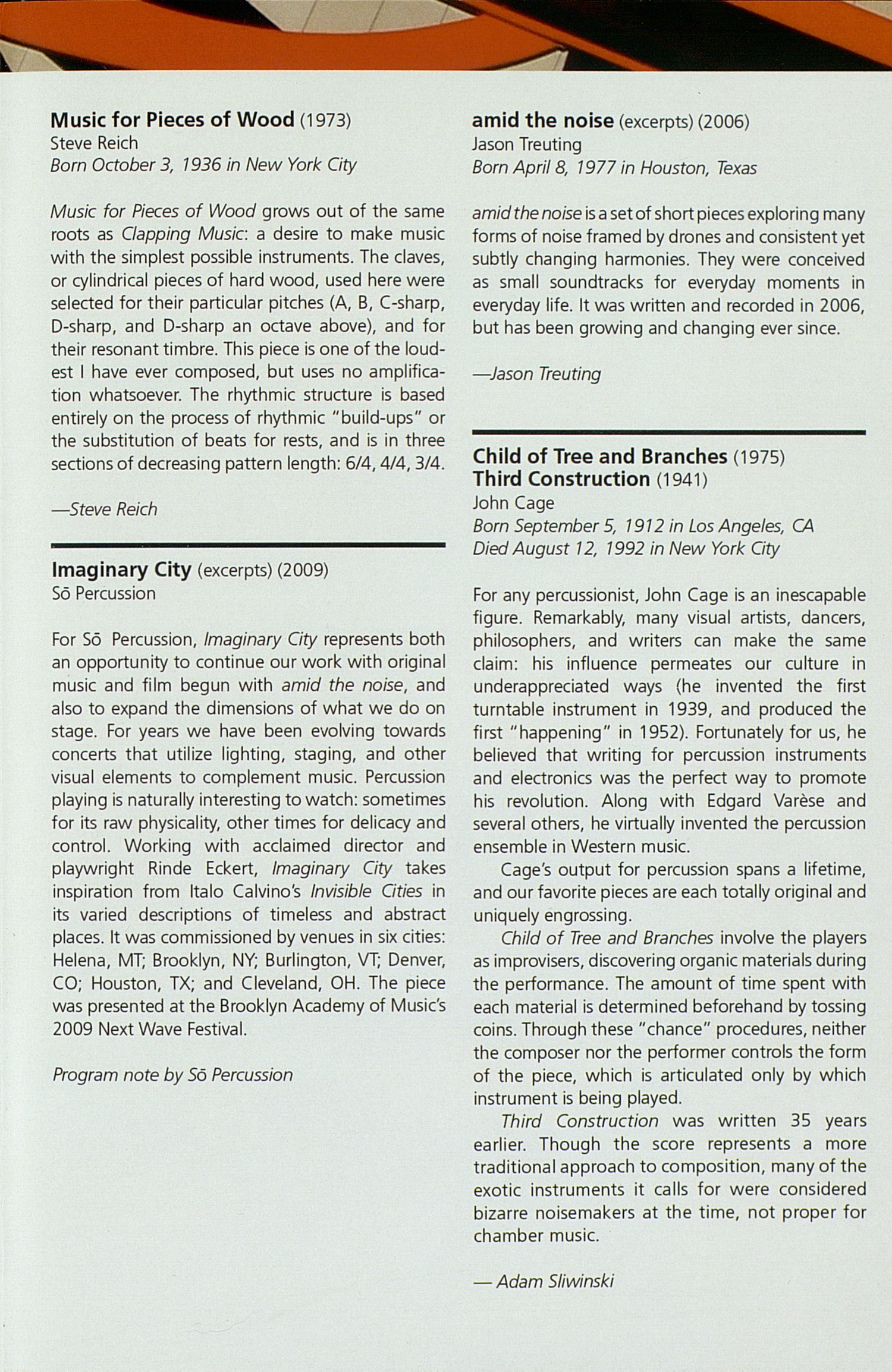 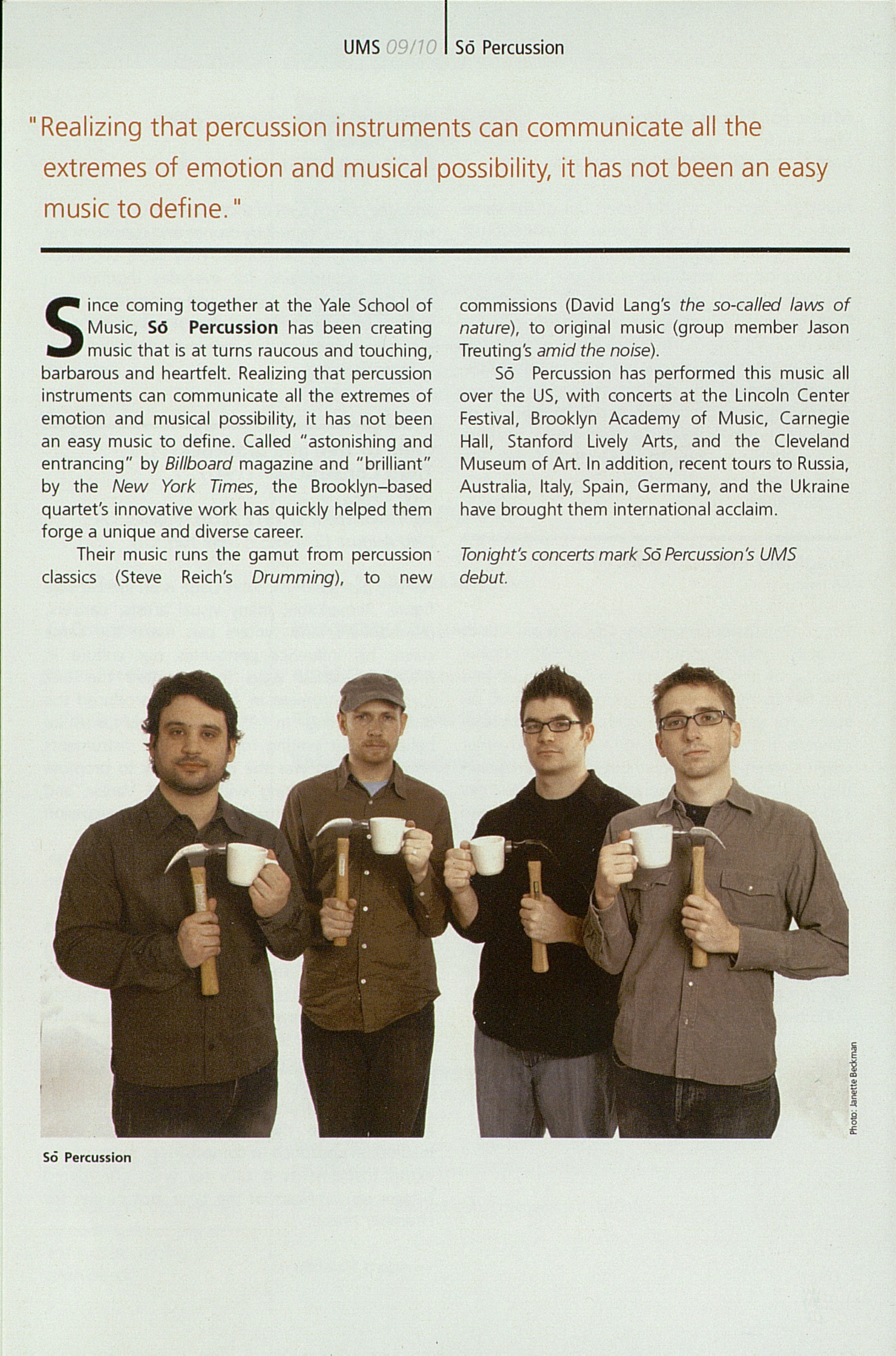 Winter 2010 Season. 131st Annual Season
ums
presents So Percussion
Eric Beach Josh Quillen Adam Sliwinski Jason Treuting
with additional percussion performed by Joseph Gramley
Program Saturday Evening, February 6, 2010 at 10:00 U-M Museum of Art Ann Arbor
So Promenade
Steve Reich Music for Pieces of Wood
So Percussion Imaginary City (excerpts)
Jason Treuting amid the noise (excerpts)
John Cage Child of Tree and Branches
Third Construction
Tonight's program will be performed without intermission and will be presented throughout galleries in the museum.
38th Performance of the 131st Annual Season The photographing or sound and iWpo Special thanks to the entire staff of U-M Museum of Art for their cooperation in the planning of tonight's special pair of concerts. Special thanks to Forest Juziuk and Dark Matter for their support of and participation in events surrounding tonight's So Percussion performances.
recording of this concert or possession of any device for such recording is prohibited. So Percussion appears by arrangement with Vantage Artists Management Inc.

Music for Pieces of Wood (1973)
Steve Reich
Born October 3, 1936 in New York City
Music for Pieces of Wood grows out of the same roots as Clapping Music: a desire to make music with the simplest possible instruments. The claves, or cylindrical pieces of hard wood, used here were selected for their particular pitches (A, B, C-sharp, D-sharp, and D-sharp an octave above), and for their resonant timbre. This piece is one of the loud?est I have ever composed, but uses no amplifica?tion whatsoever. The rhythmic structure is based entirely on the process of rhythmic "build-ups" or the substitution of beats for rests, and is in three sections of decreasing pattern length: 64,44, 34.
--Steve Reich
Imaginary City (excerpts) (2009) So Percussion
For So Percussion, Imaginary City represents both an opportunity to continue our work with original music and film begun with amid the noise, and also to expand the dimensions of what we do on stage. For years we have been evolving towards concerts that utilize lighting, staging, and other visual elements to complement music. Percussion playing is naturally interesting to watch: sometimes for its raw physicality, other times for delicacy and control. Working with acclaimed director and playwright Rinde Eckert, Imaginary City takes inspiration from Italo Calvino's Invisible Cities in its varied descriptions of timeless and abstract places. It was commissioned by venues in six cities: Helena, MT; Brooklyn, NY; Burlington, VT; Denver, CO; Houston, TX; and Cleveland, OH. The piece was presented at the Brooklyn Academy of Music's 2009 Next Wave Festival.
Program note by So Percussion
amid the noise (excerpts) (2006)
Jason Treuting
Born April 8, 1977 in Houston, Texas
amid the noise is a set of short pieces exploring many forms of noise framed by drones and consistent yet subtly changing harmonies. They were conceived as small soundtracks for everyday moments in everyday life. It was written and recorded in 2006, but has been growing and changing ever since.
--Jason Treuting
Child of Tree and Branches (1975)
Third Construction (1941)
John Cage
Born September 5, 1912 in Los Angeles, CA
Died August 12, 1992 in New York City
For any percussionist, John Cage is an inescapable figure. Remarkably, many visual artists, dancers, philosophers, and writers can make the same claim: his influence permeates our culture in underappreciated ways (he invented the first turntable instrument in 1939, and produced the first "happening" in 1952). Fortunately for us, he believed that writing for percussion instruments and electronics was the perfect way to promote his revolution. Along with Edgard Varese and several others, he virtually invented the percussion ensemble in Western music.
Cage's output for percussion spans a lifetime, and our favorite pieces are each totally original and uniquely engrossing.
Child of Tree and Branches involve the players as improvisers, discovering organic materials during the performance. The amount of time spent with each material is determined beforehand by tossing coins. Through these "chance" procedures, neither the composer nor the performer controls the form of the piece, which is articulated only by which instrument is being played.
Third Construction was written 35 years earlier. Though the score represents a more traditional approach to composition, many of the exotic instruments it calls for were considered bizarre noisemakers at the time, not proper for chamber music.
-Adam Sliwinski
"Realizing that percussion instruments can communicate all the extremes of emotion and musical possibility, it has not been an easy music to define."
Since coming together at the Yale School of Music, S5 Percussion has been creating music that is at tums raucous and touching, barbarous and heartfelt. Realizing that percussion instruments can communicate all the extremes of emotion and musical possibility, it has not been an easy music to define. Called "astonishing and entrancing" by Billboard magazine and "brilliant" by the New York Times, the Brooklyn-based quartet's innovative work has quickly helped them forge a unique and diverse career.
Their music runs the gamut from percussion classics (Steve Reich's Drumming), to new
commissions (David Lang's the so-called laws of nature), to original music (group member Jason Treuting's amid the noise).
So Percussion has performed this music all over the US, with concerts at the Lincoln Center Festival, Brooklyn Academy of Music, Carnegie Hall, Stanford Lively Arts, and the Cleveland Museum of Art. In addition, recent tours to Russia, Australia, Italy, Spain, Germany, and the Ukraine have brought them international acclaim.
Tonight's concerts mark So Percussion's UMS debut.
Photo: Janette Beckman
So Percussion