UMS Concert Program, November 6, 2017 - The Joke Is Mightier than the Sword 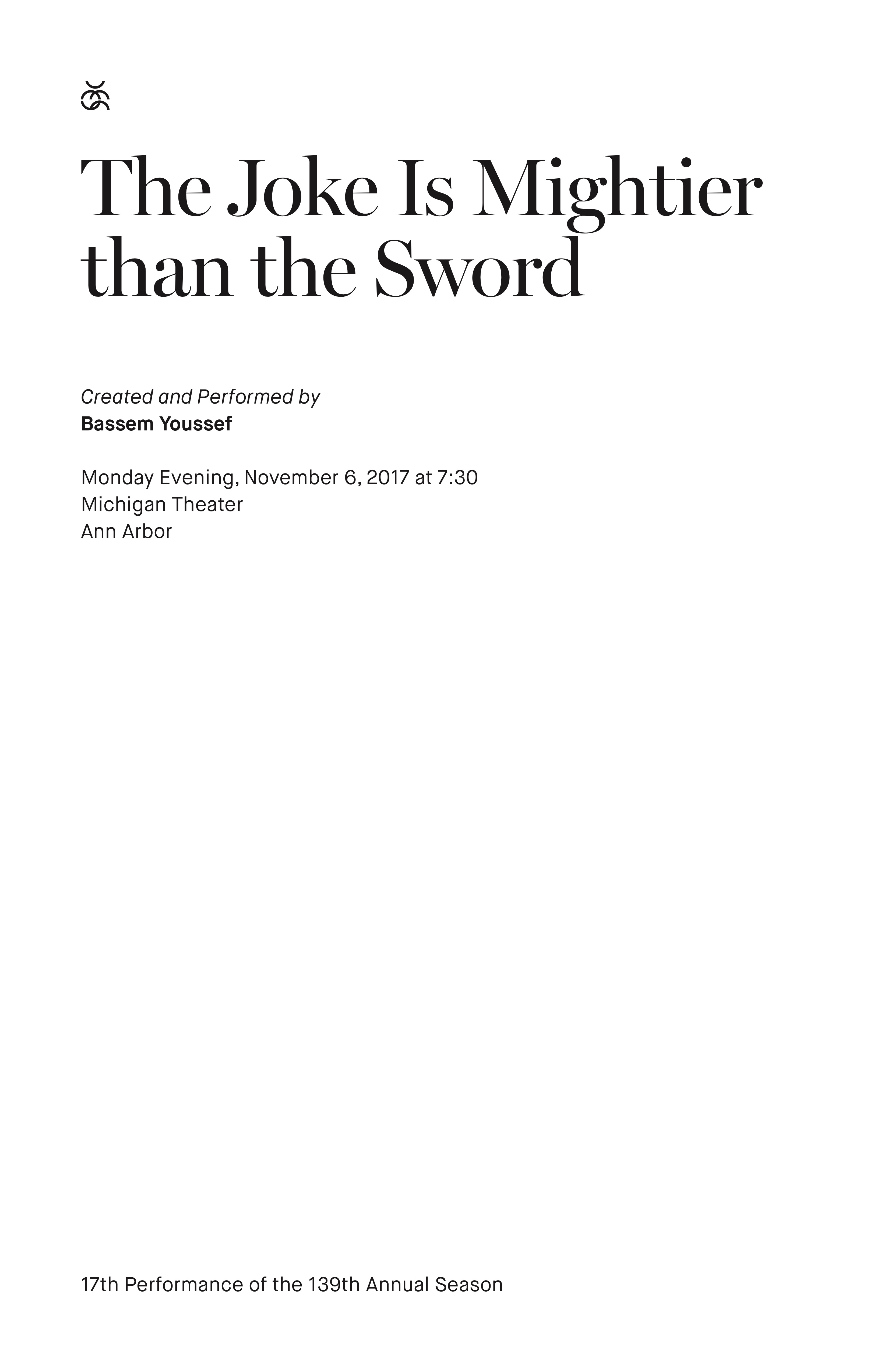 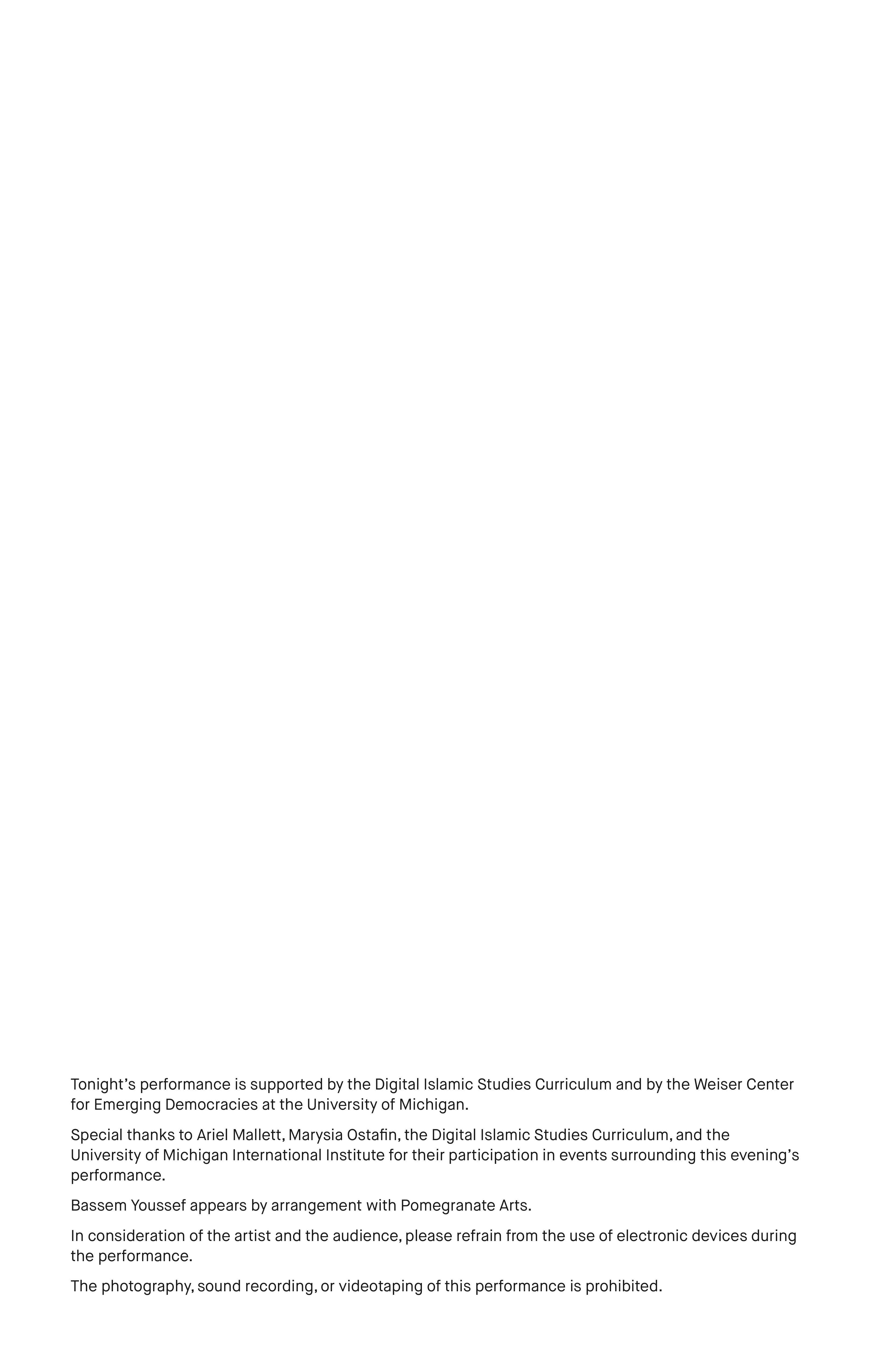 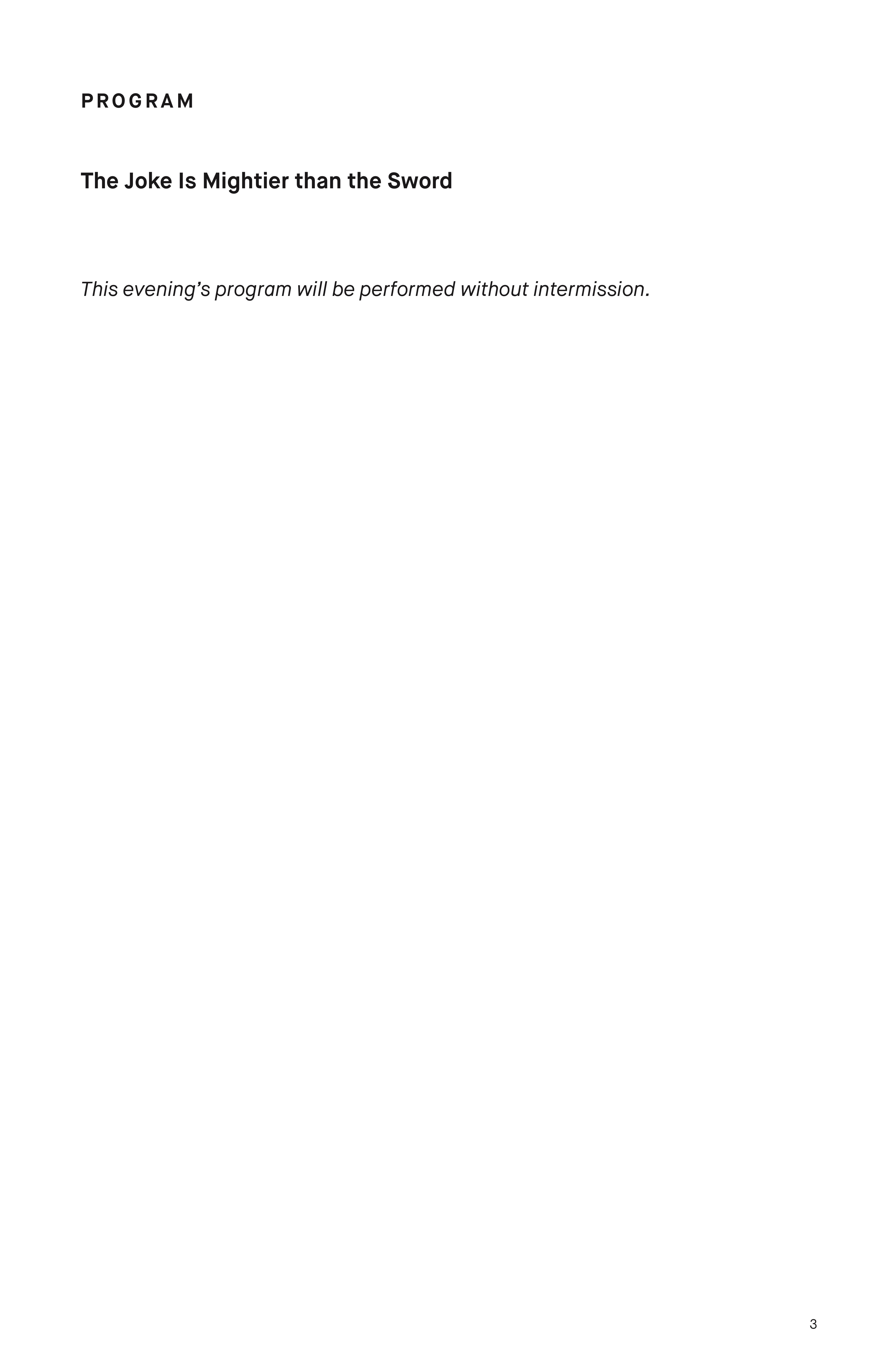 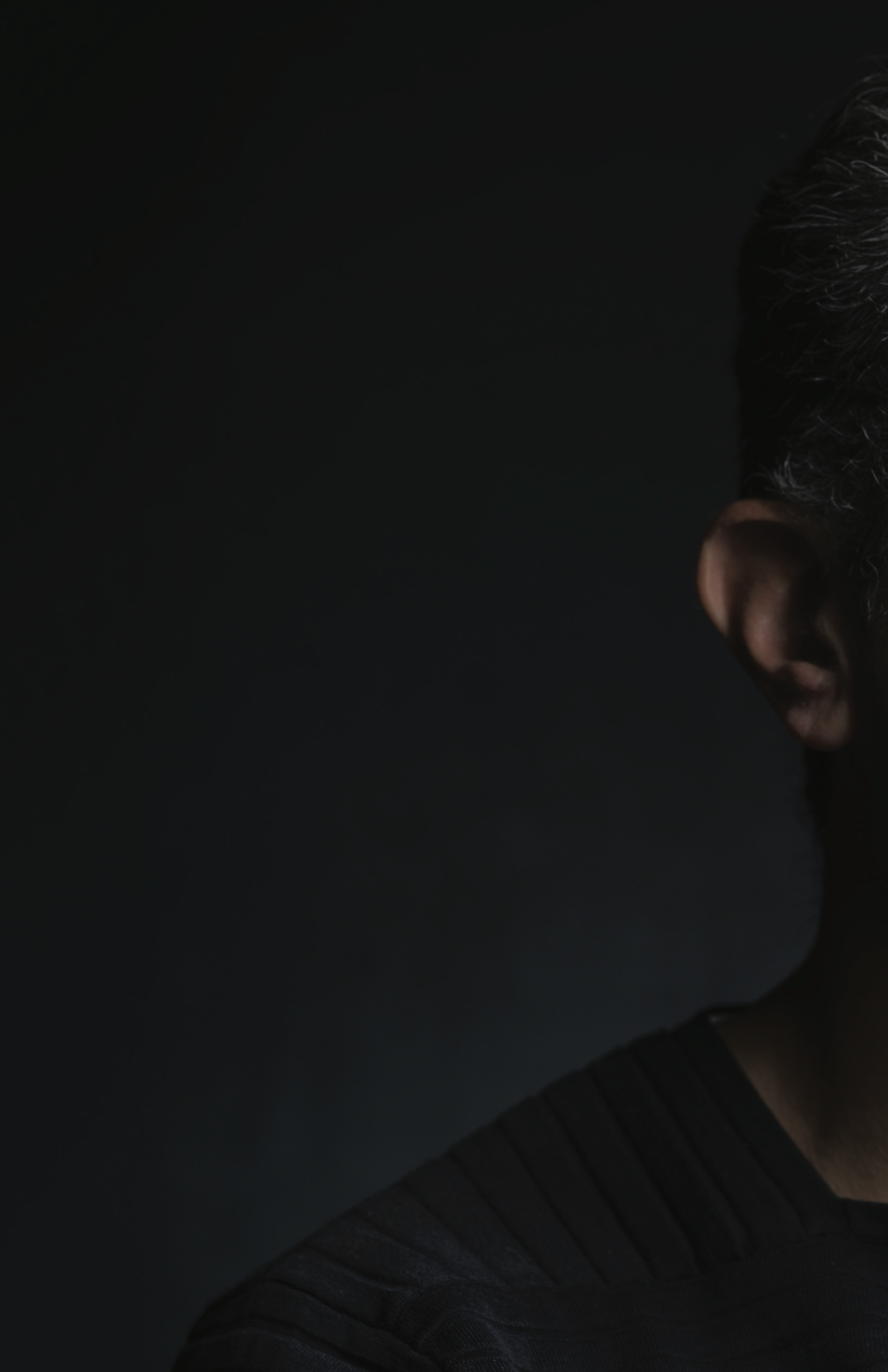 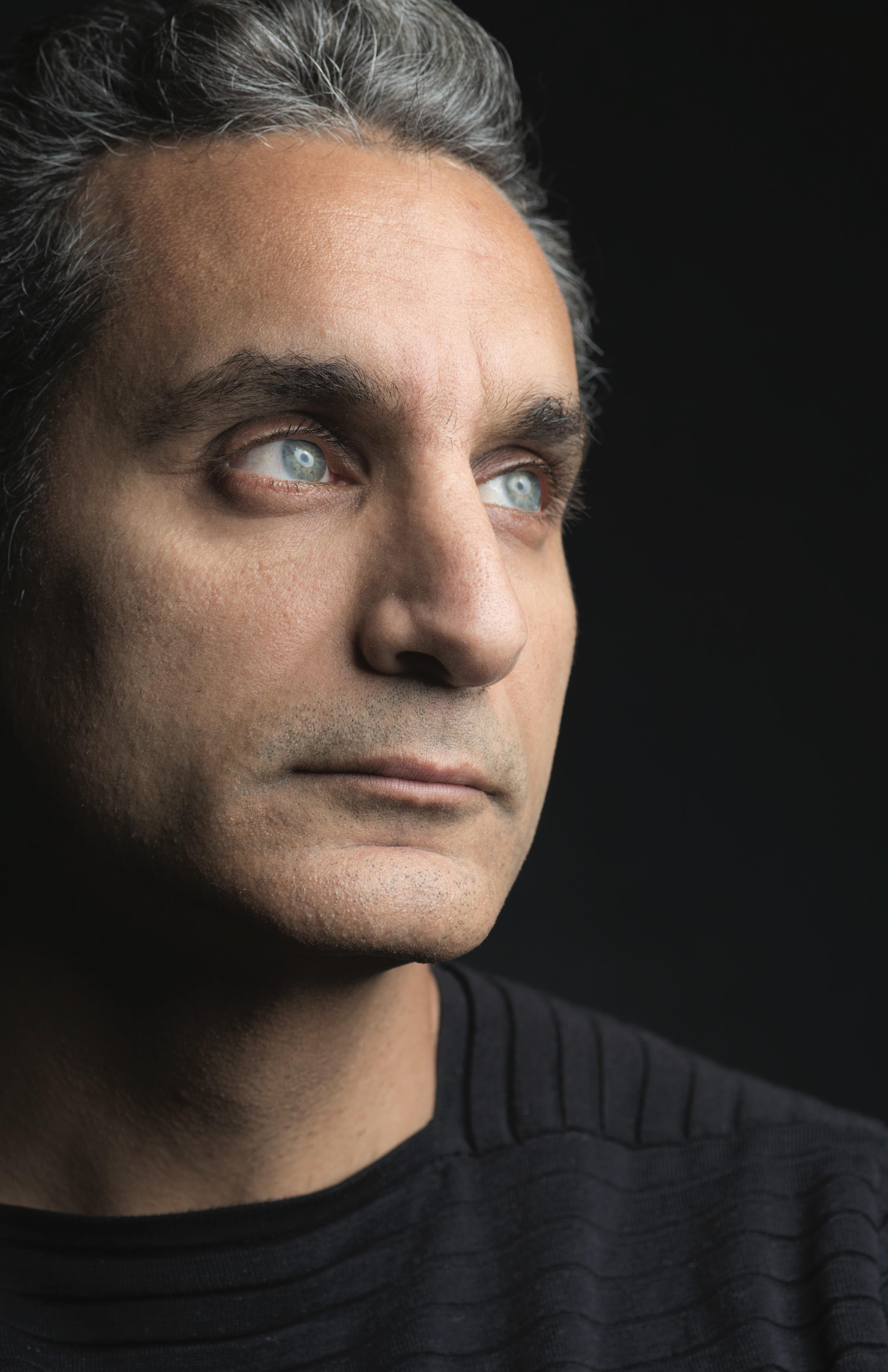 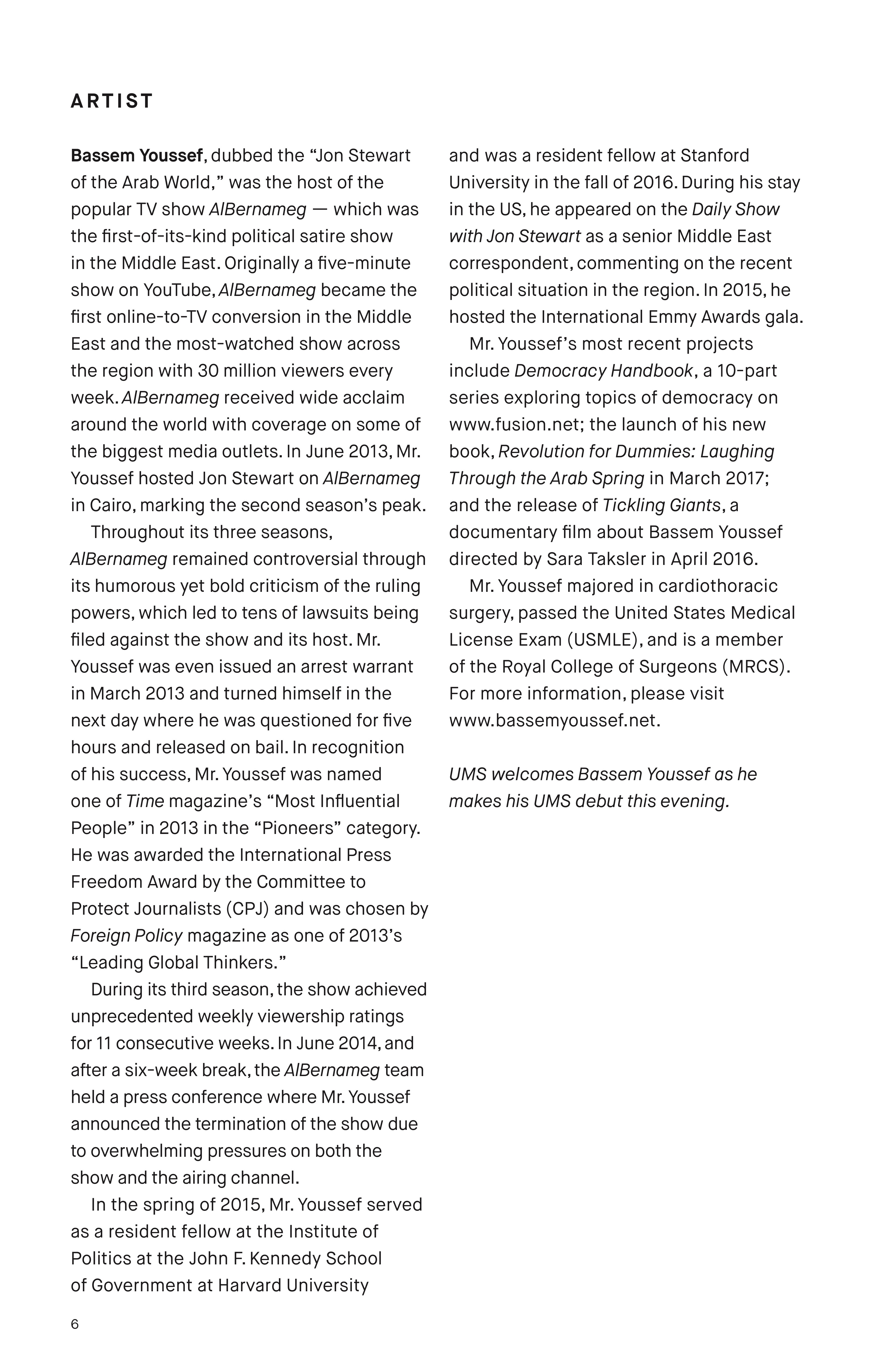 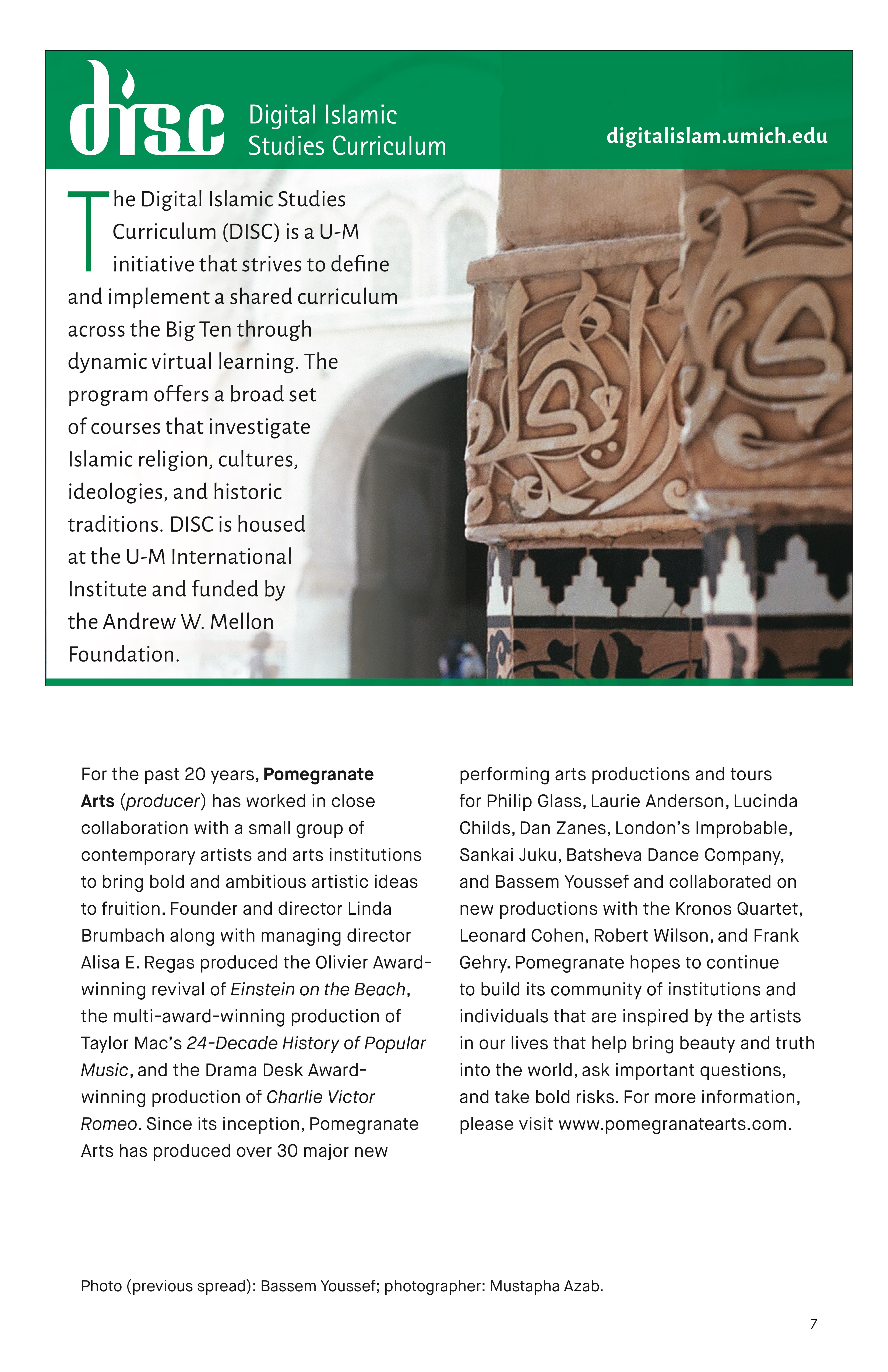 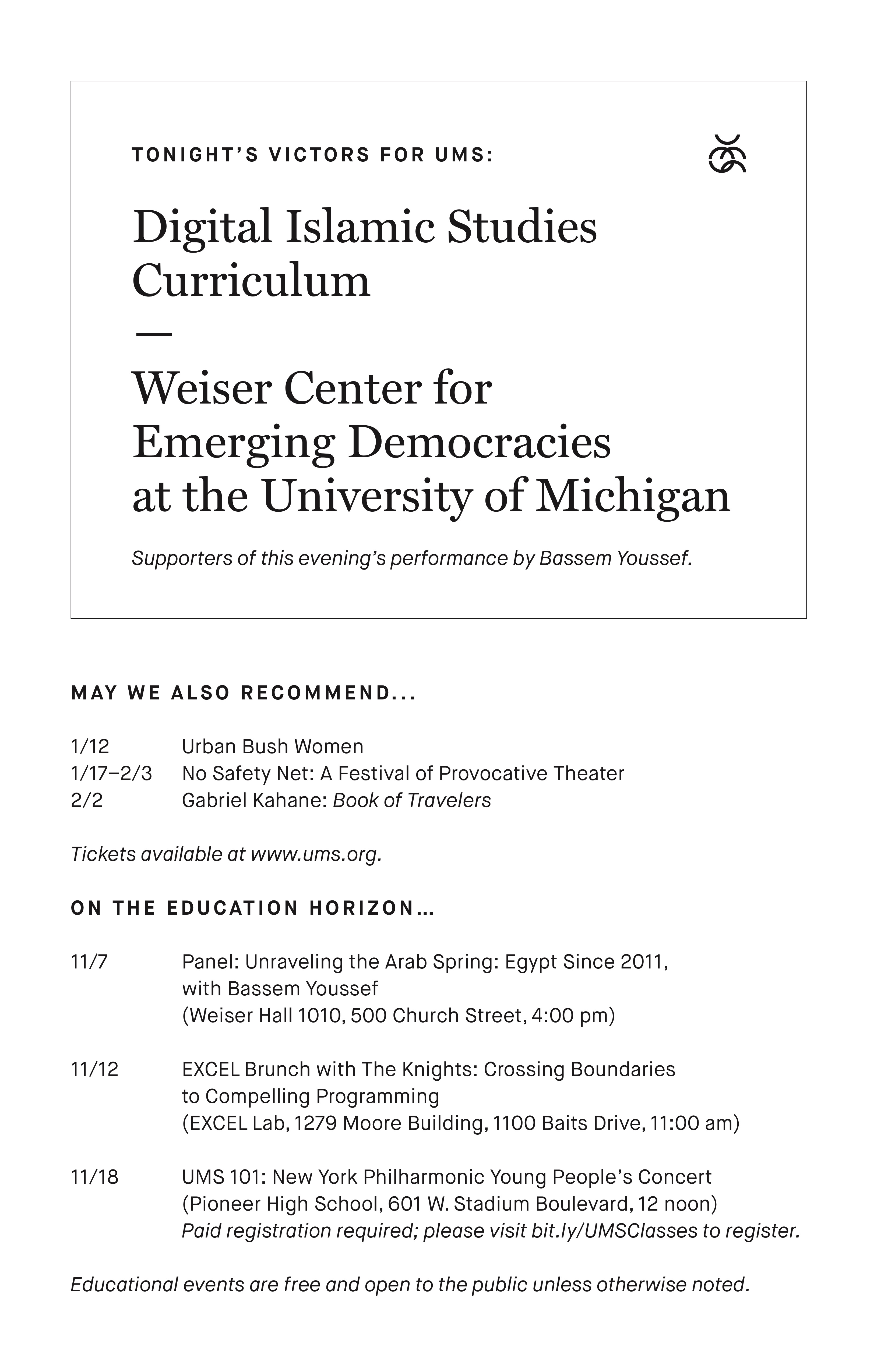 The Joke Is Mightier than the Sword Created and Performed by Bassem Youssef Monday Evening, November 6, 2017 at 7:30 Michigan Theater Ann Arbor 17th Performance of the 139th Annual Season TonightÕs performance is supported by the Digital Islamic Studies Curriculum and by the Weiser Center for Emerging Democracies at the University of Michigan. Special thanks to Ariel Mallett, Marysia Ostafin, the Digital Islamic Studies Curriculum, and the University of Michigan International Institute for their participation in events surrounding this eveningÕs performance. Bassem Youssef appears by arrangement with Pomegranate Arts. In consideration of the artist and the audience, please refrain from the use of electronic devices during the performance. The photography, sound recording, or videotaping of this performance is prohibited. PROGRAM The Joke Is Mightier than the Sword This eveningÕs program will be performed without intermission. ARTIST Bassem Youssef, dubbed the ÒJon Stewart of the Arab World,Ó was the host of the popular TV show AlBernameg Ñ which was the first-of-its-kind political satire show in the Middle East. Originally a five-minute show on YouTube, AlBernameg became the first online-to-TV conversion in the Middle East and the most-watched show across the region with 30 million viewers every week. AlBernameg received wide acclaim around the world with coverage on some of the biggest media outlets. In June 2013, Mr. Youssef hosted Jon Stewart on AlBernameg in Cairo, marking the second seasonÕs peak. Throughout its three seasons, AlBernameg remained controversial through its humorous yet bold criticism of the ruling powers, which led to tens of lawsuits being filed against the show and its host. Mr. Youssef was even issued an arrest warrant in March 2013 and turned himself in the next day where he was questioned for five hours and released on bail. In recognition of his success, Mr. Youssef was named one of Time magazineÕs ÒMost Influential PeopleÓ in 2013 in the ÒPioneersÓ category. He was awarded the International Press Freedom Award by the Committee to Protect Journalists (CPJ) and was chosen by Foreign Policy magazine as one of 2013Õs
ÒLeading Global Thinkers.Ó During its third season, the show achieved unprecedented weekly viewership ratings for 11 consecutive weeks. In June 2014, and after a six-week break, the AlBernameg team held a press conference where Mr. Youssef announced the termination of the show due to overwhelming pressures on both the
show and the airing channel. In the spring of 2015, Mr. Youssef served as a resident fellow at the Institute of Politics at the John F. Kennedy School of Government at Harvard University and was a resident fellow at Stanford University in the fall of 2016. During his stay in the US, he appeared on the Daily Show with Jon Stewart as a senior Middle East correspondent, commenting on the recent political situation in the region. In 2015, he hosted the International Emmy Awards gala. Mr. YoussefÕs most recent projects include Democracy Handbook, a 10-part series exploring topics of democracy on www.fusion.net; the launch of his new book, Revolution for Dummies: Laughing Through the Arab Spring in March 2017; and the release of Tickling Giants, a documentary film about Bassem Youssef directed by Sara Taksler in April 2016. Mr. Youssef majored in cardiothoracic surgery, passed the United States Medical License Exam (USMLE), and is a member
of the Royal College of Surgeons (MRCS).
For more information, please visit
www.bassemyoussef.net. UMS welcomes Bassem Youssef as he makes his UMS debut this evening. For the past 20 years, Pomegranate Arts (producer) has worked in close collaboration with a small group of contemporary artists and arts institutions to bring bold and ambitious artistic ideas to fruition. Founder and director Linda Brumbach along with managing director Alisa E. Regas produced the Olivier Award-winning revival of Einstein on the Beach, the multi-award-winning production of Taylor MacÕs 24-Decade History of Popular Music, and the Drama Desk Award-winning production of Charlie Victor Romeo. Since its inception, Pomegranate Arts has produced over 30 major new performing arts productions and tours for Philip Glass, Laurie Anderson, Lucinda Childs, Dan Zanes, LondonÕs Improbable, Sankai Juku, Batsheva Dance Company, and Bassem Youssef and collaborated on new productions with the Kronos Quartet, Leonard Cohen, Robert Wilson, and Frank Gehry. Pomegranate hopes to continue to build its community of institutions and individuals that are inspired by the artists in our lives that help bring beauty and truth into the world, ask important questions, and take bold risks. For more information, please visit www.pomegranatearts.com. Photo (previous spread): Bassem Youssef; photographer: Mustapha Azab. TONIGHTÕS VICTORS FOR UMS: Digital Islamic Studies Curriculum Ñ Weiser Center for
Emerging Democracies at the University of Michigan Supporters of this eveningÕs performance by Bassem Youssef. MAY WE ALSO RECOMMEND... 1/12    Urban Bush Women 1/17Ð2/3    No Safety Net: A Festival of Provocative Theater 2/2    Gabriel Kahane: Book of Travelers Tickets available at www.ums.org. ON THE EDUCATION HORIZONÉ 11/7    Panel: Unraveling the Arab Spring: Egypt Since 2011,
with Bassem Youssef     (Weiser Hall 1010, 500 Church Street, 4:00 pm) 11/12    EXCEL Brunch with The Knights: Crossing Boundaries
to Compelling Programming     (EXCEL Lab, 1279 Moore Building, 1100 Baits Drive, 11:00 am) 11/18    UMS 101: New York Philharmonic Young PeopleÕs Concert     (Pioneer High School, 601 W. Stadium Boulevard, 12 noon)     Paid registration required; please visit bit.ly/UMSClasses to register. Educational events are free and open to the public unless otherwise noted.