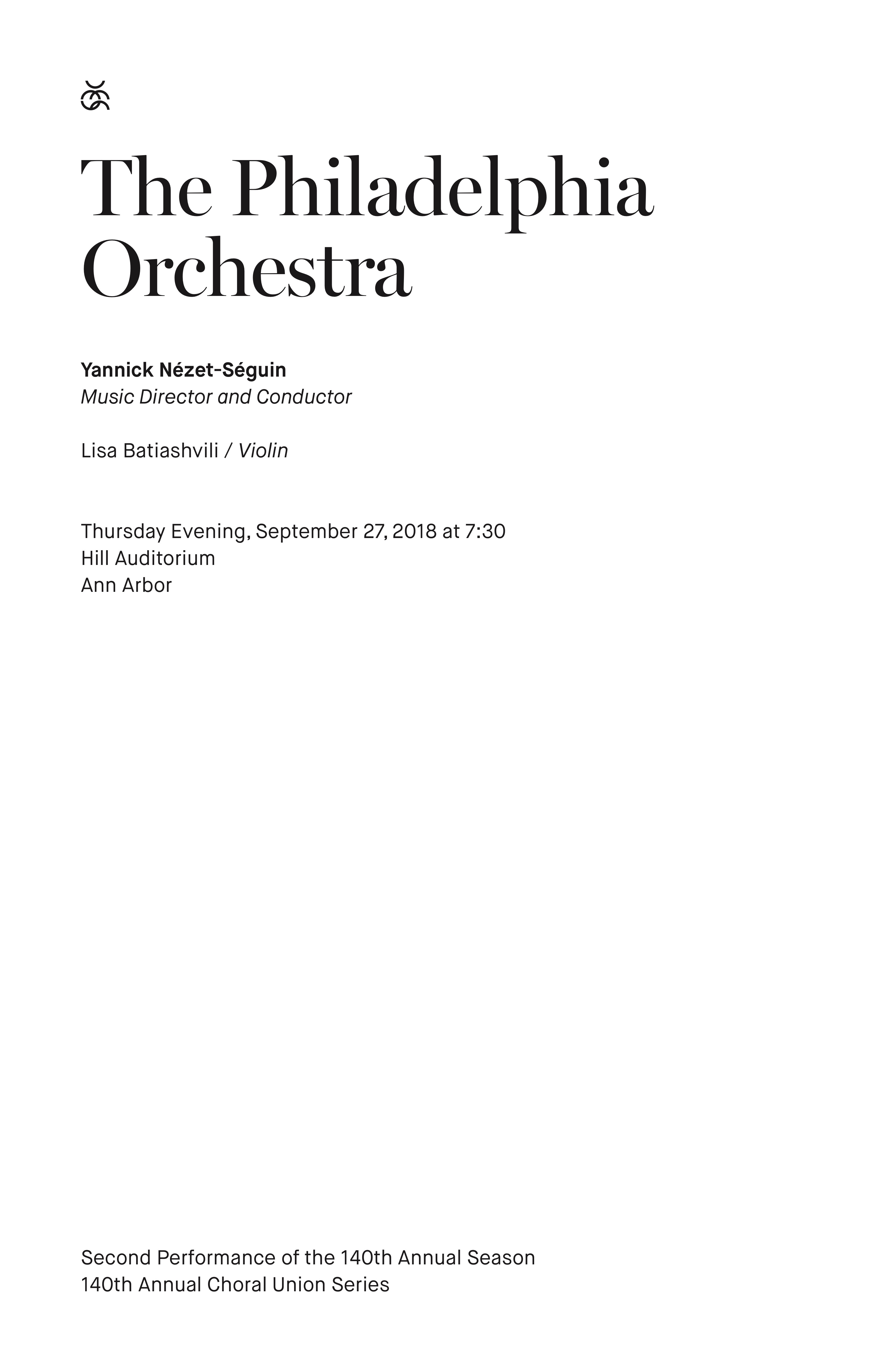 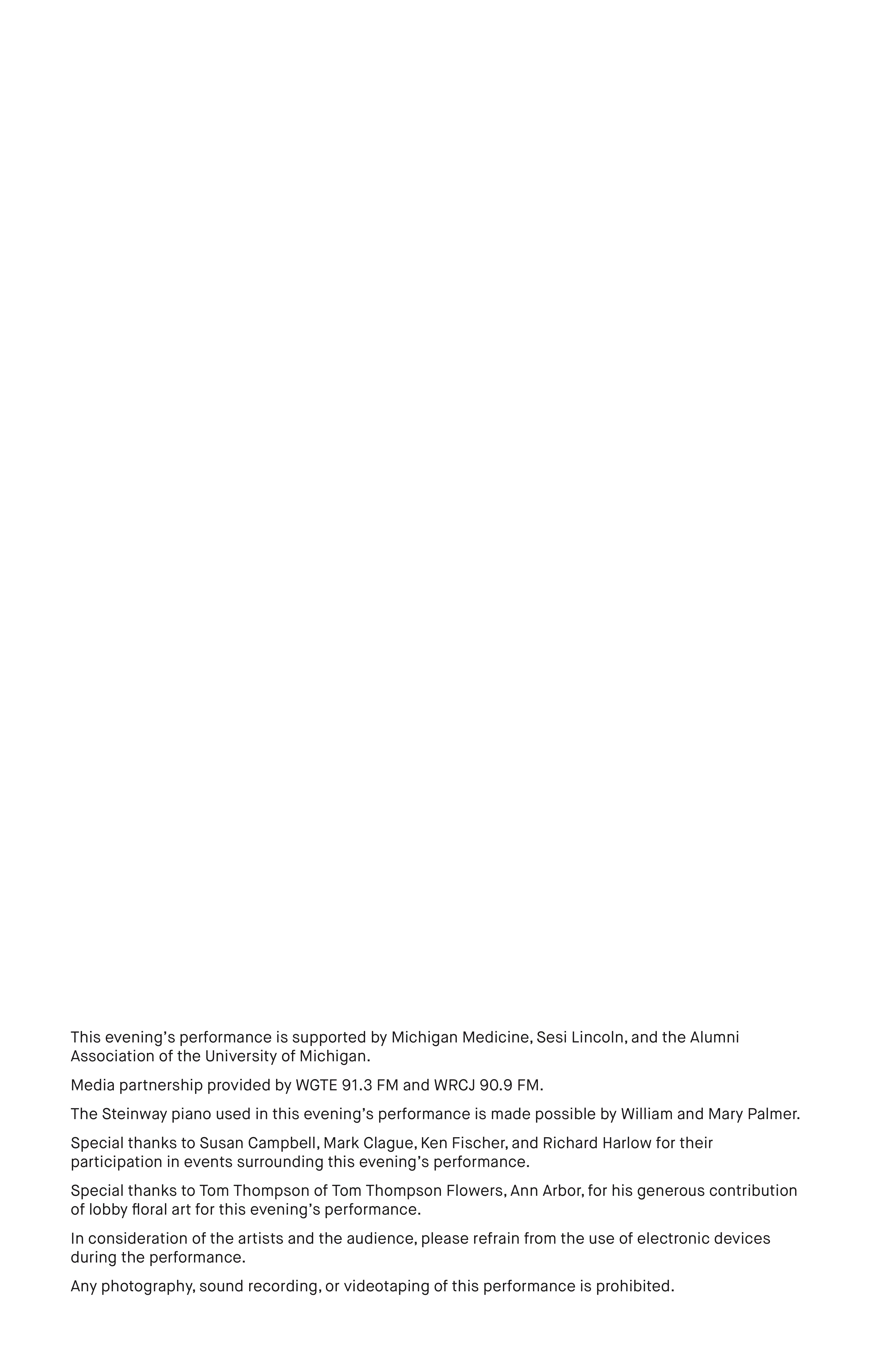 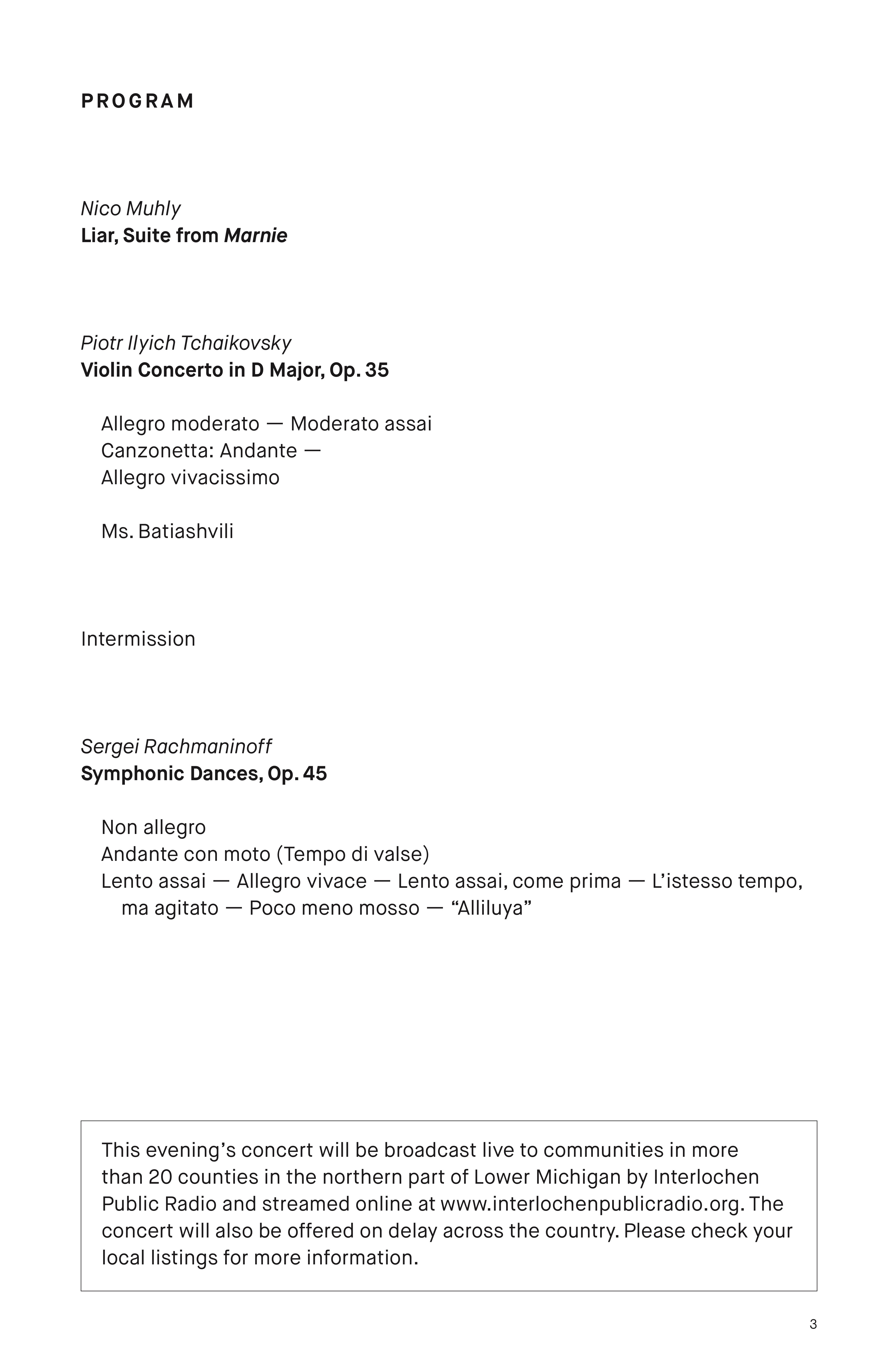 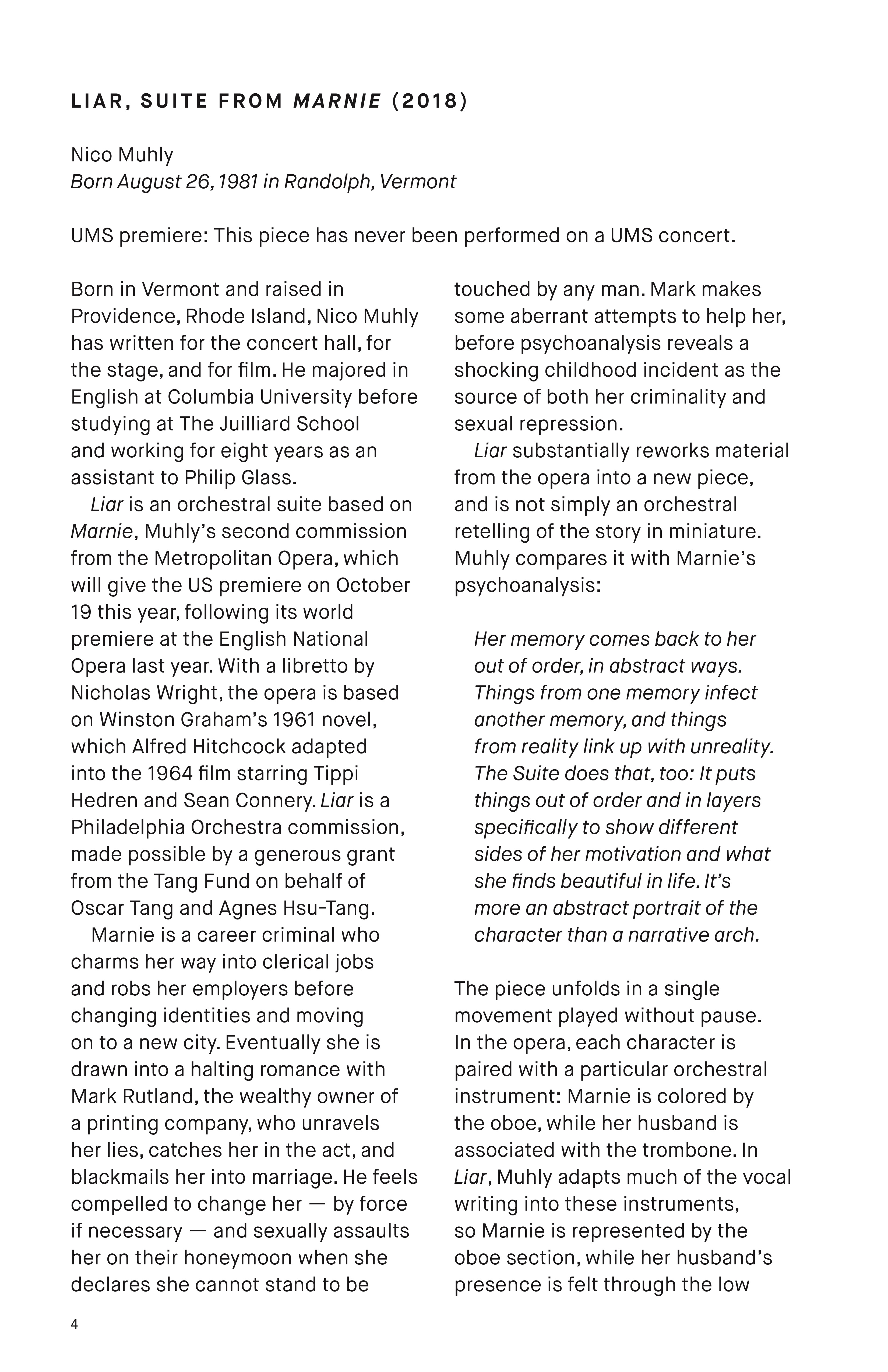 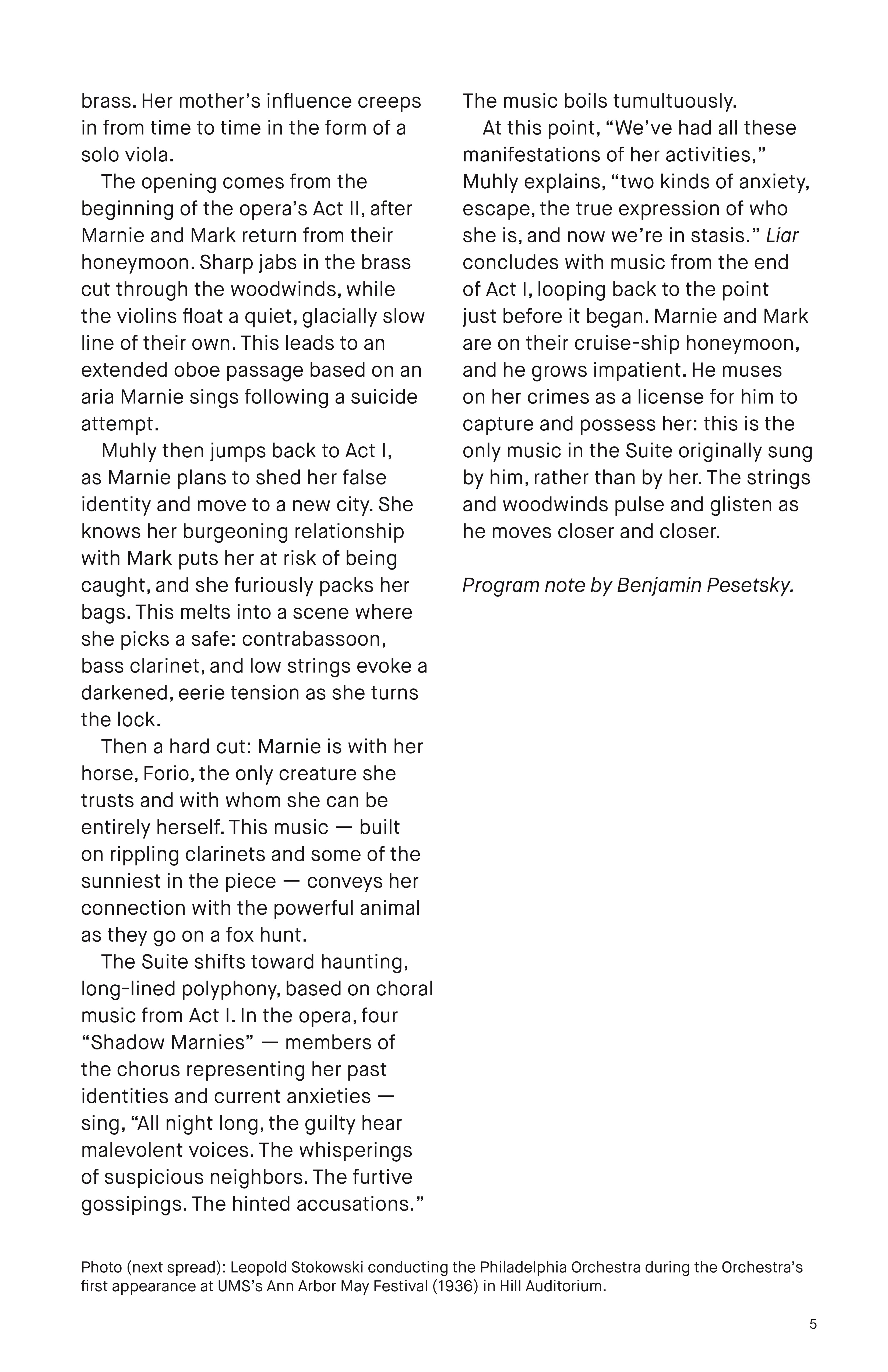 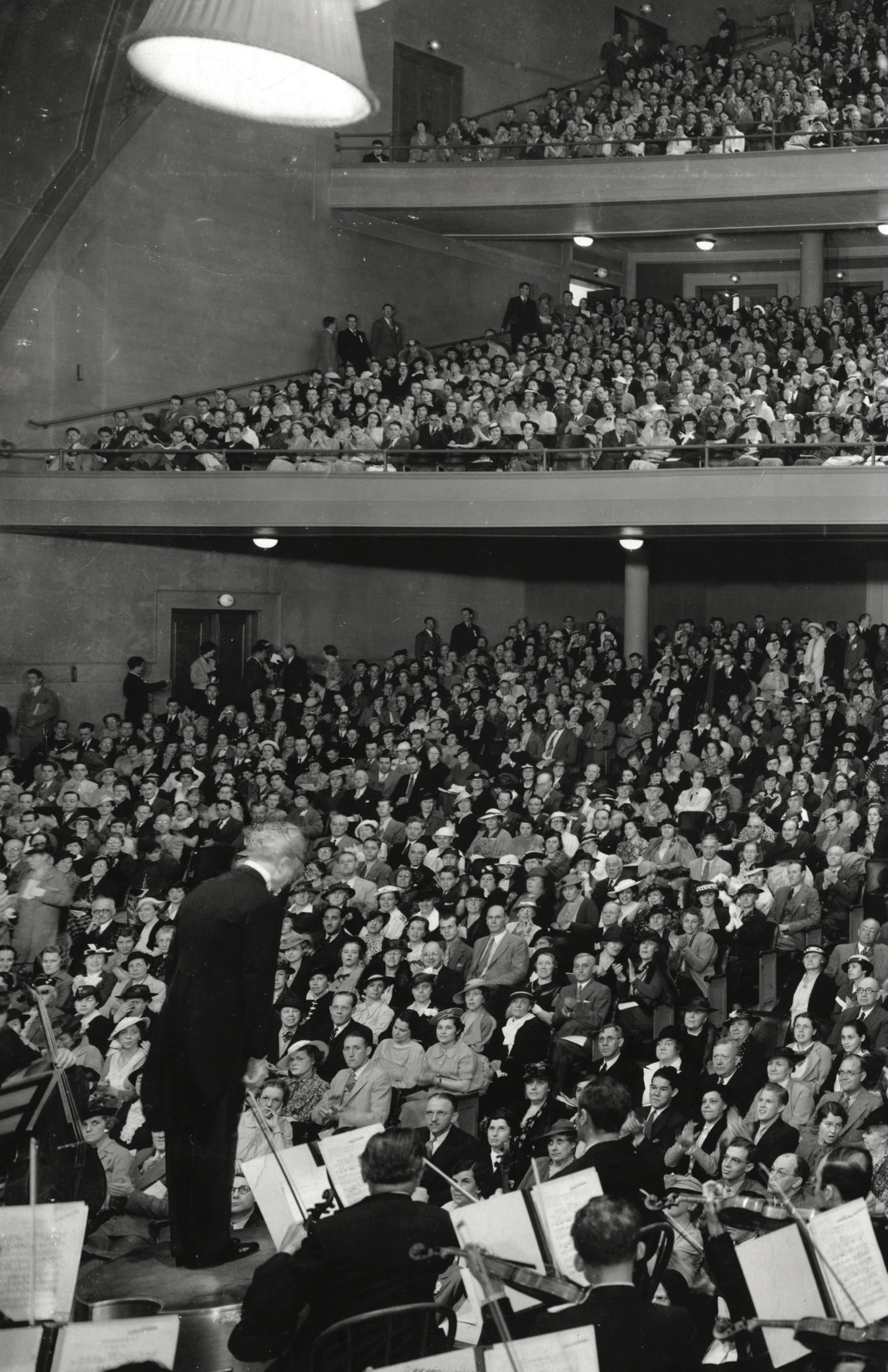 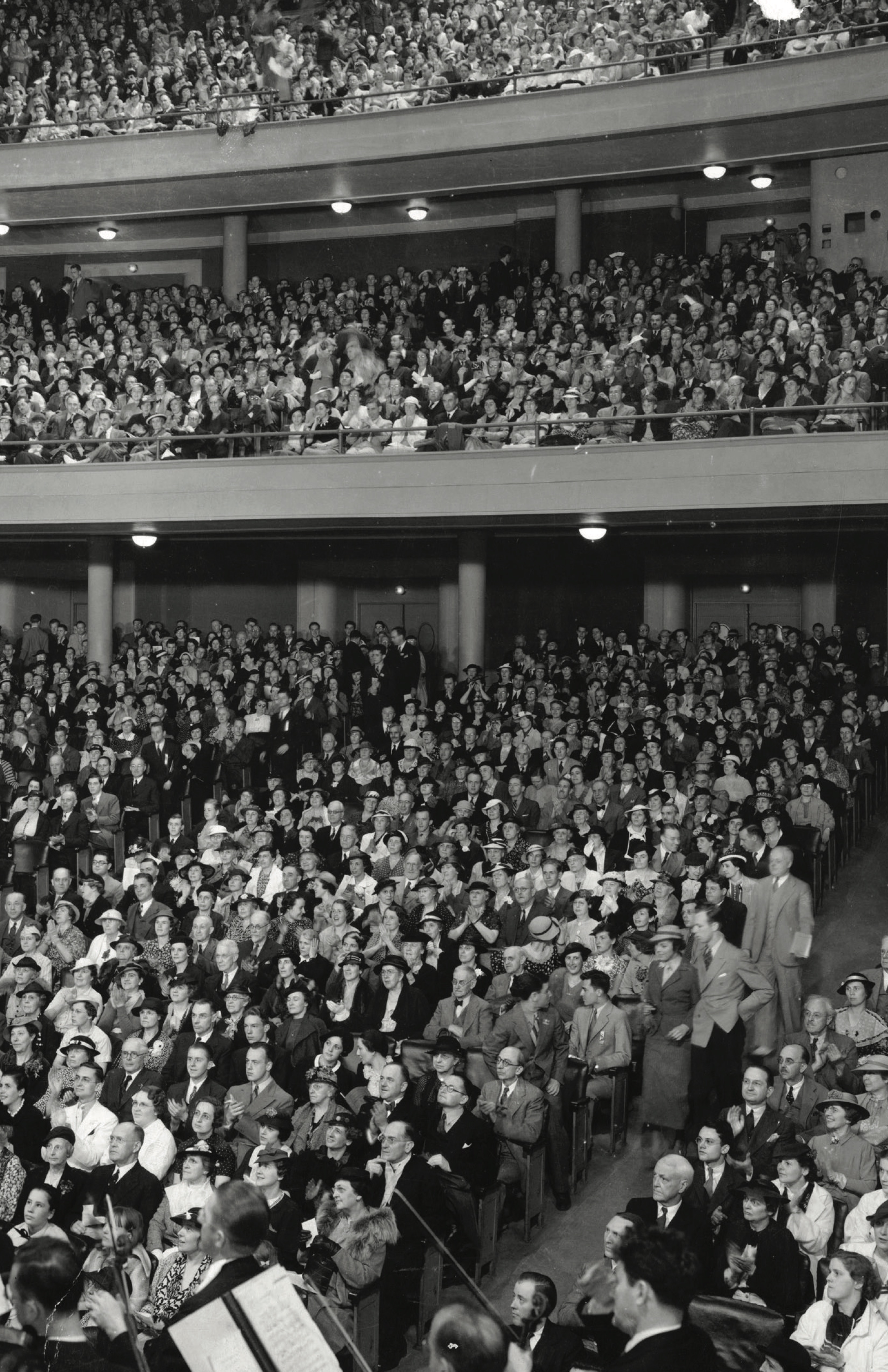 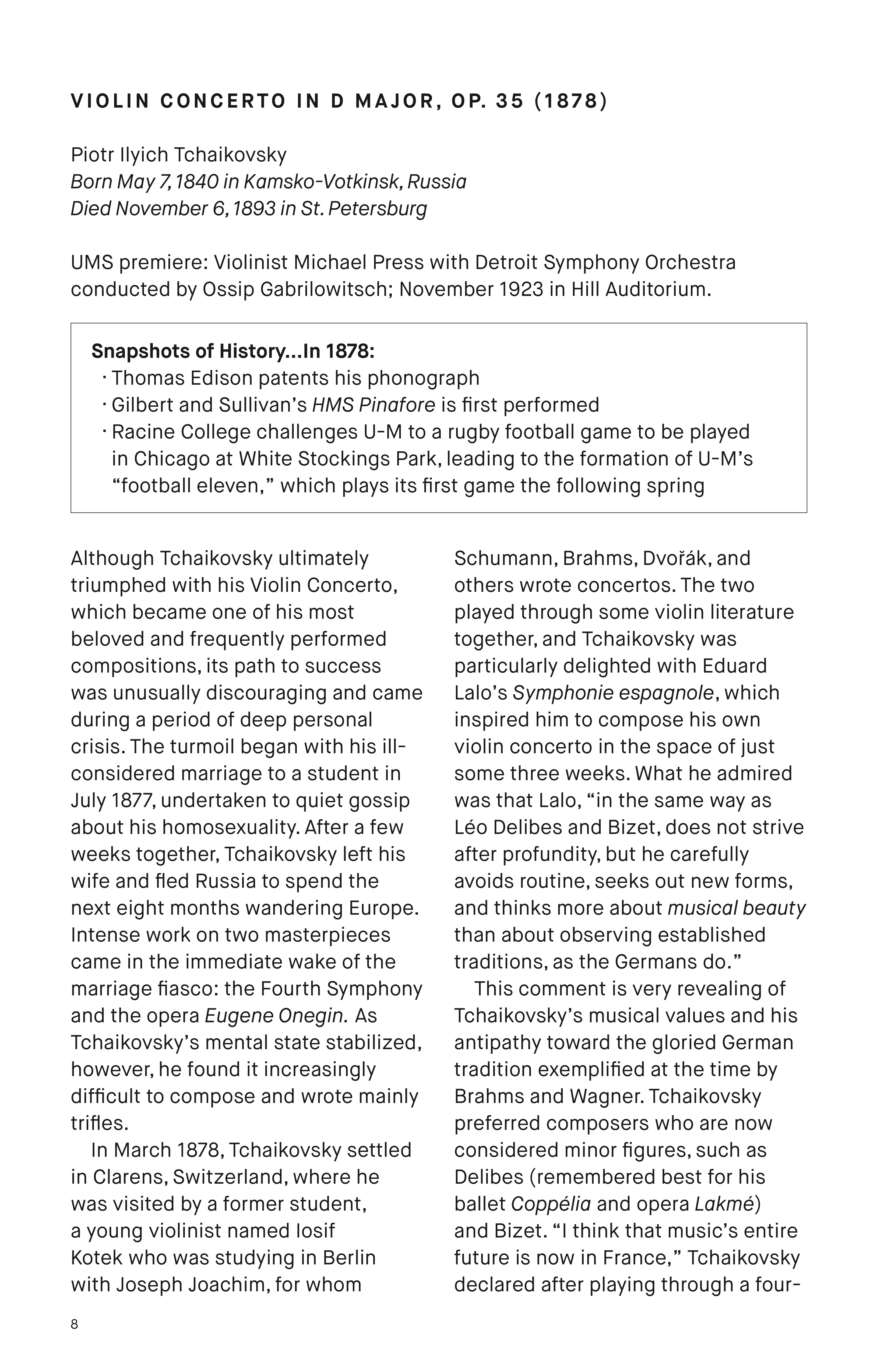 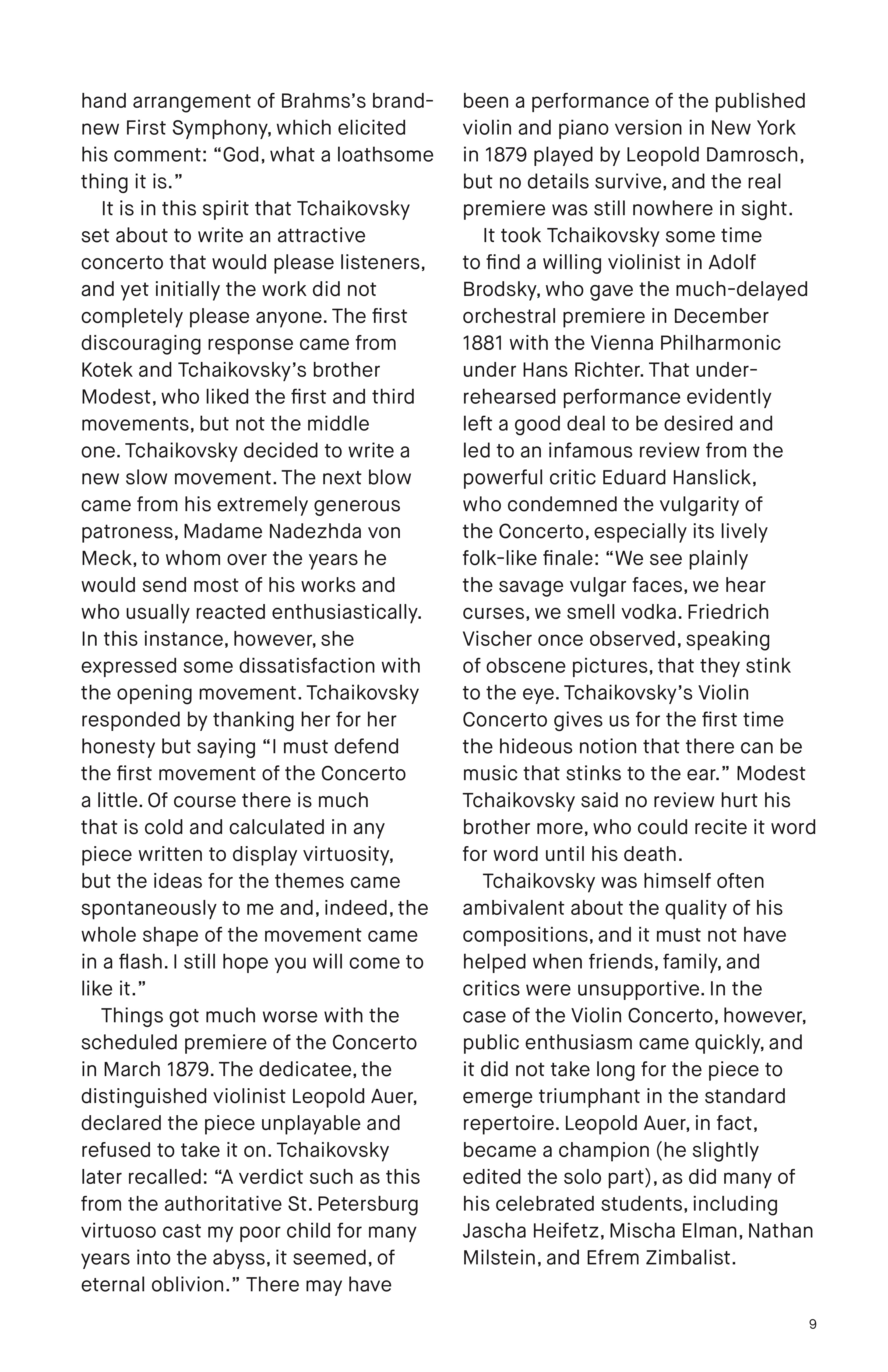 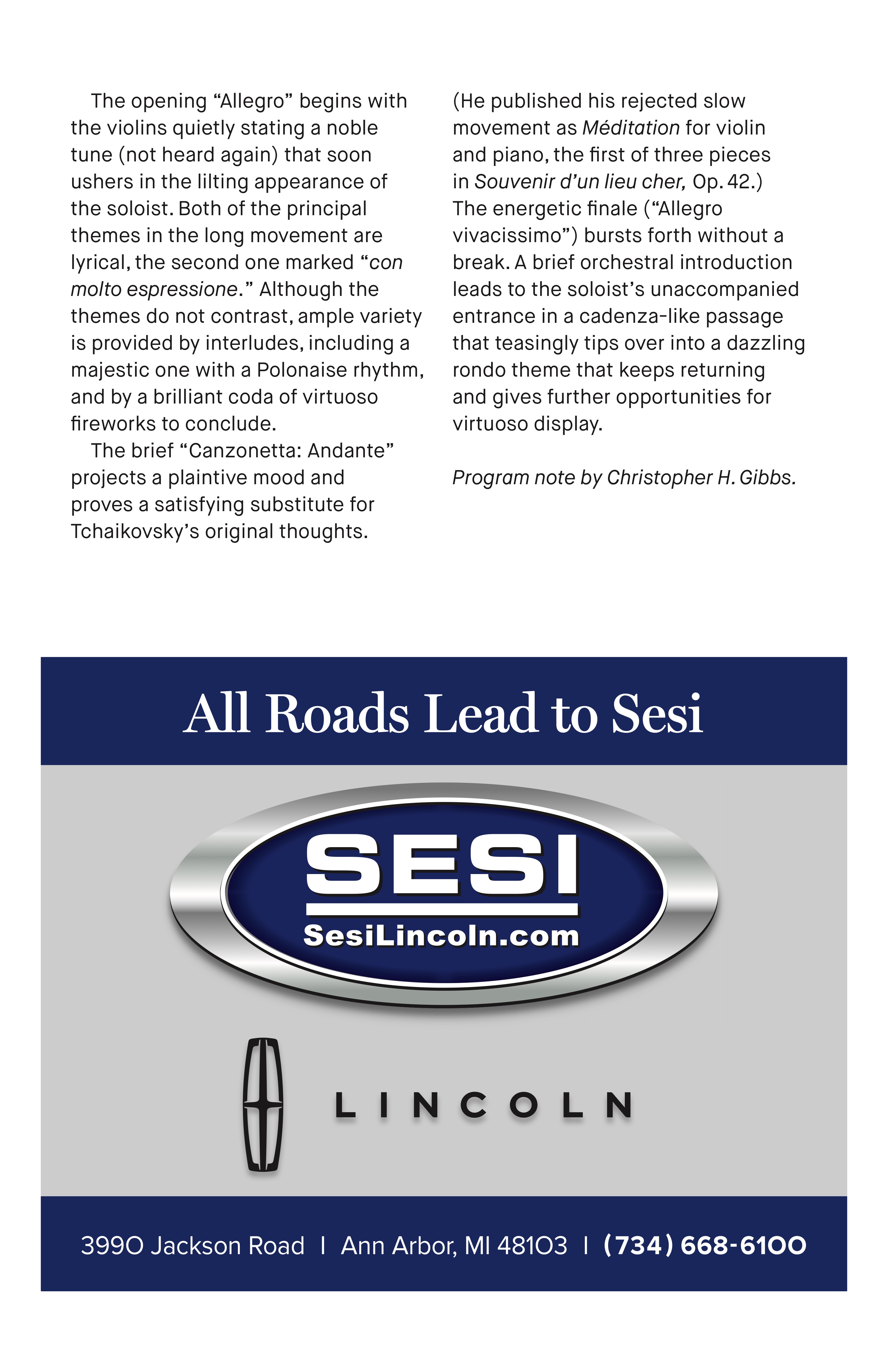 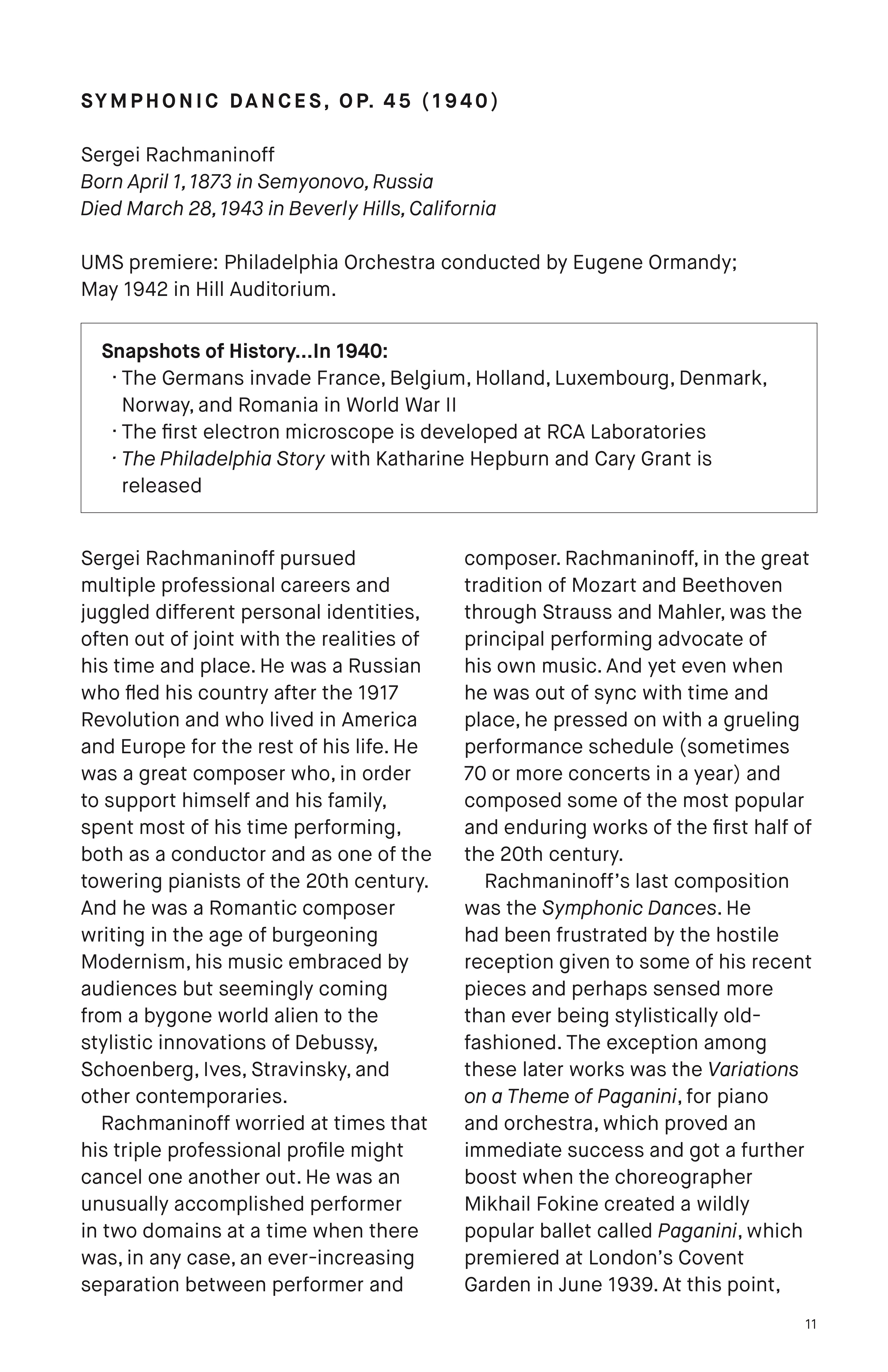 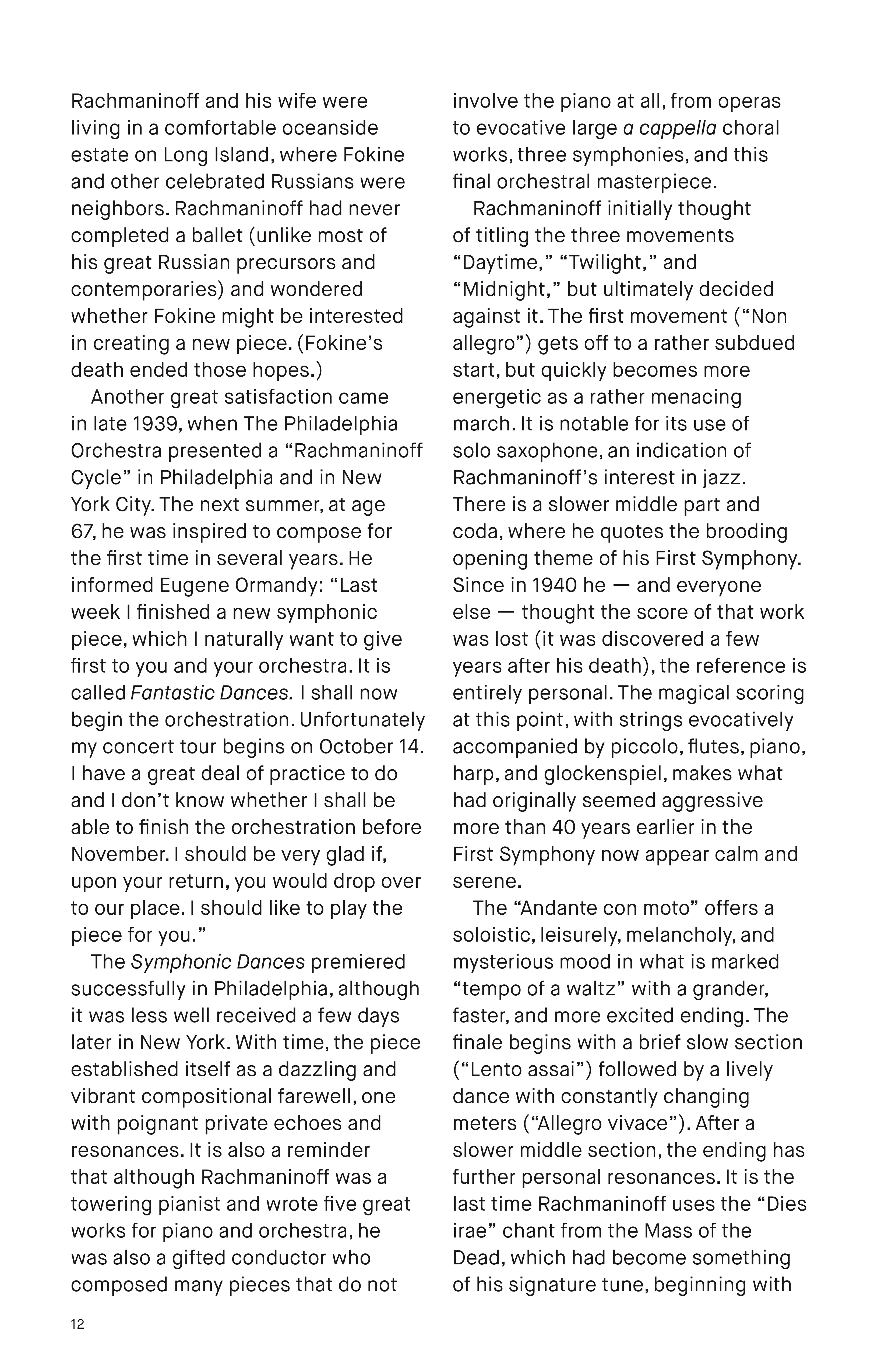 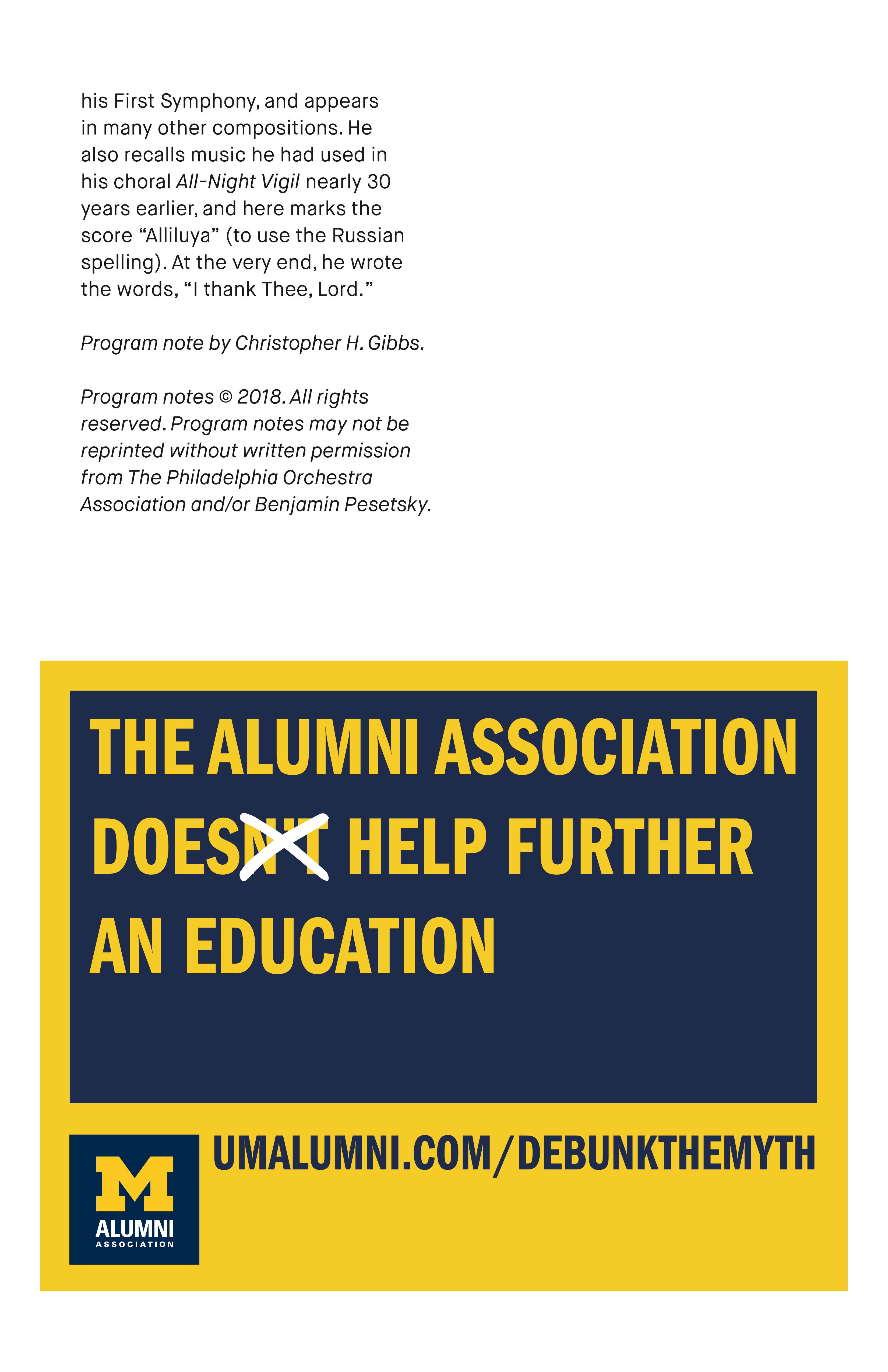 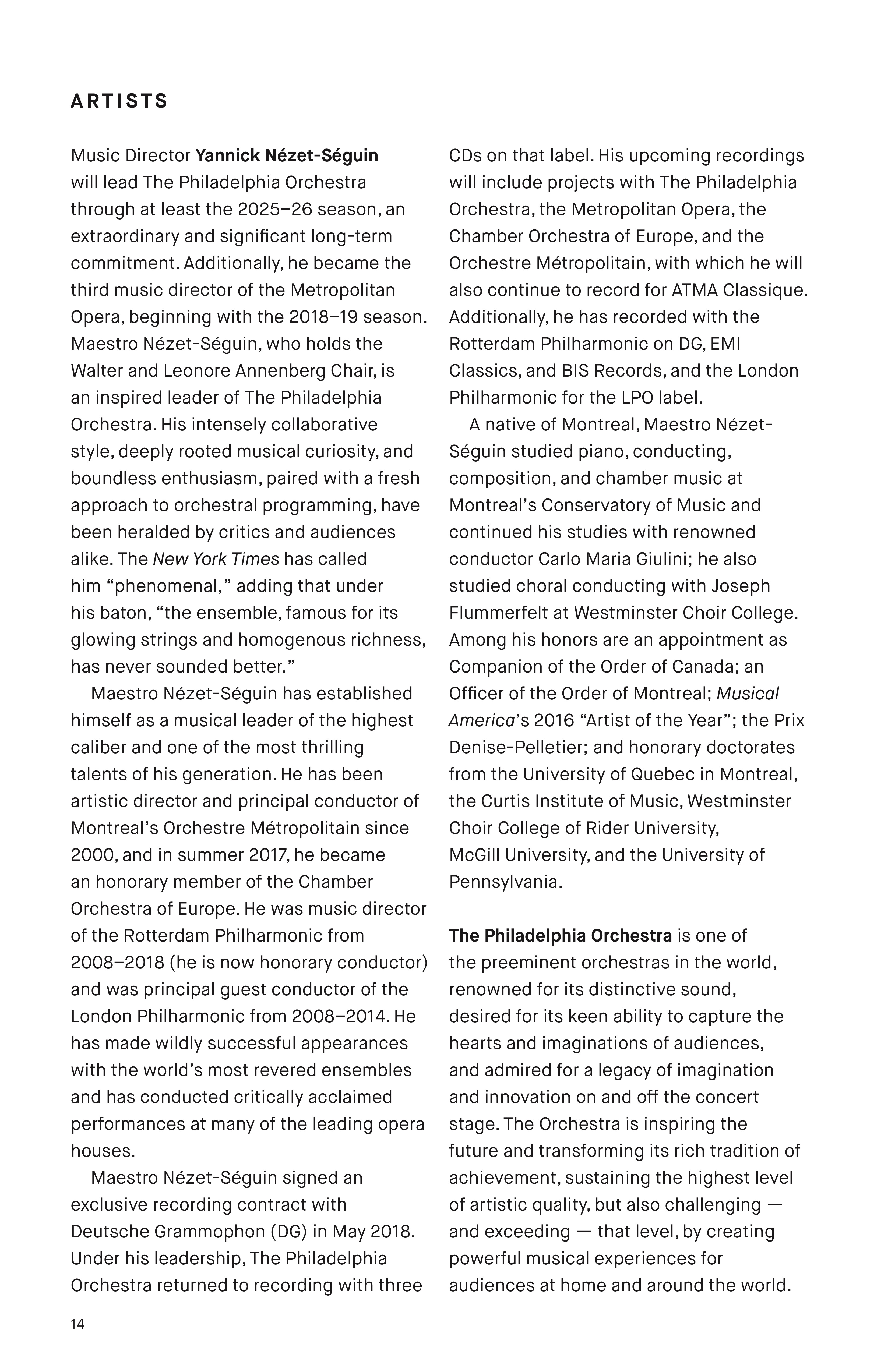 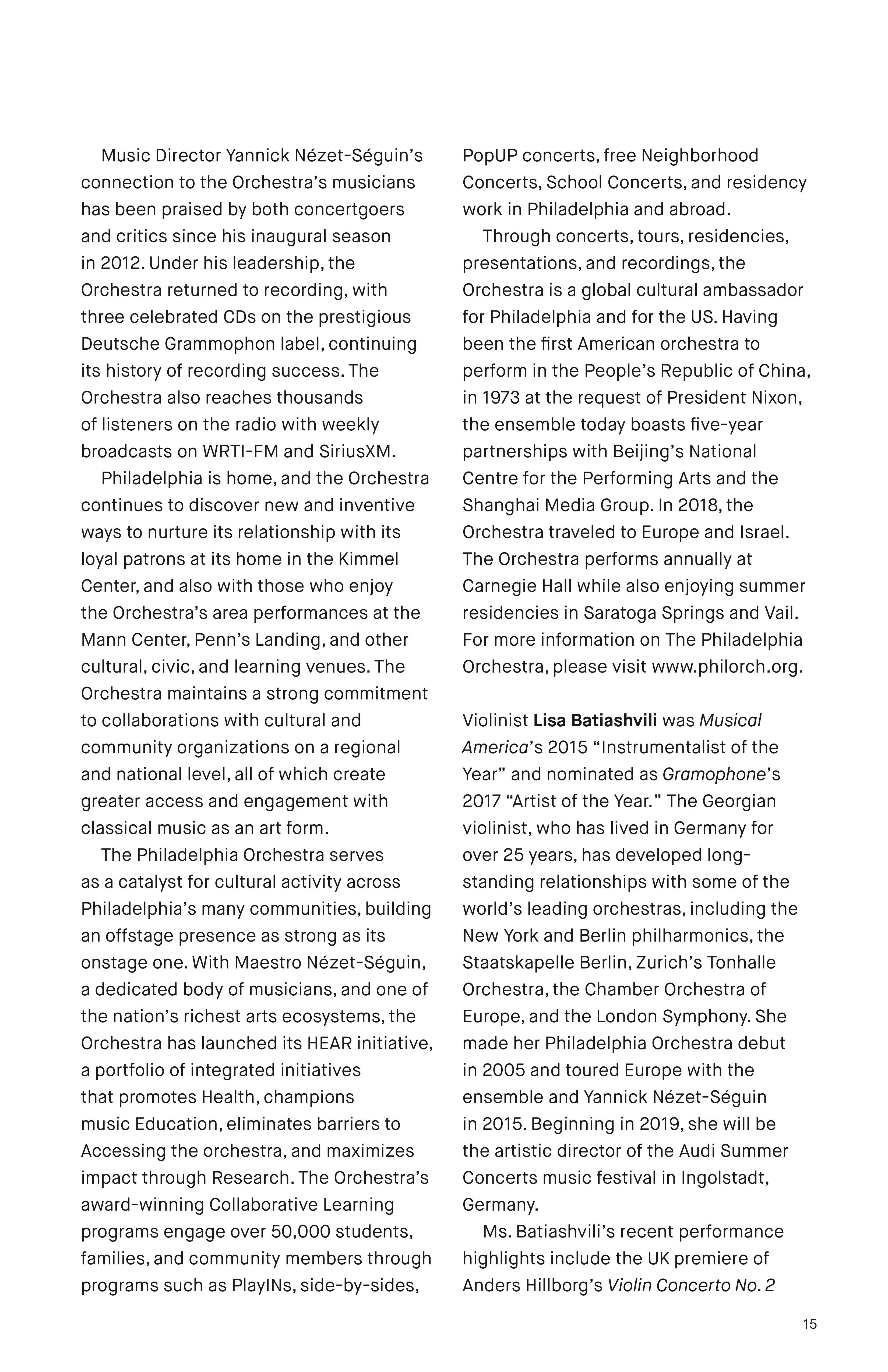 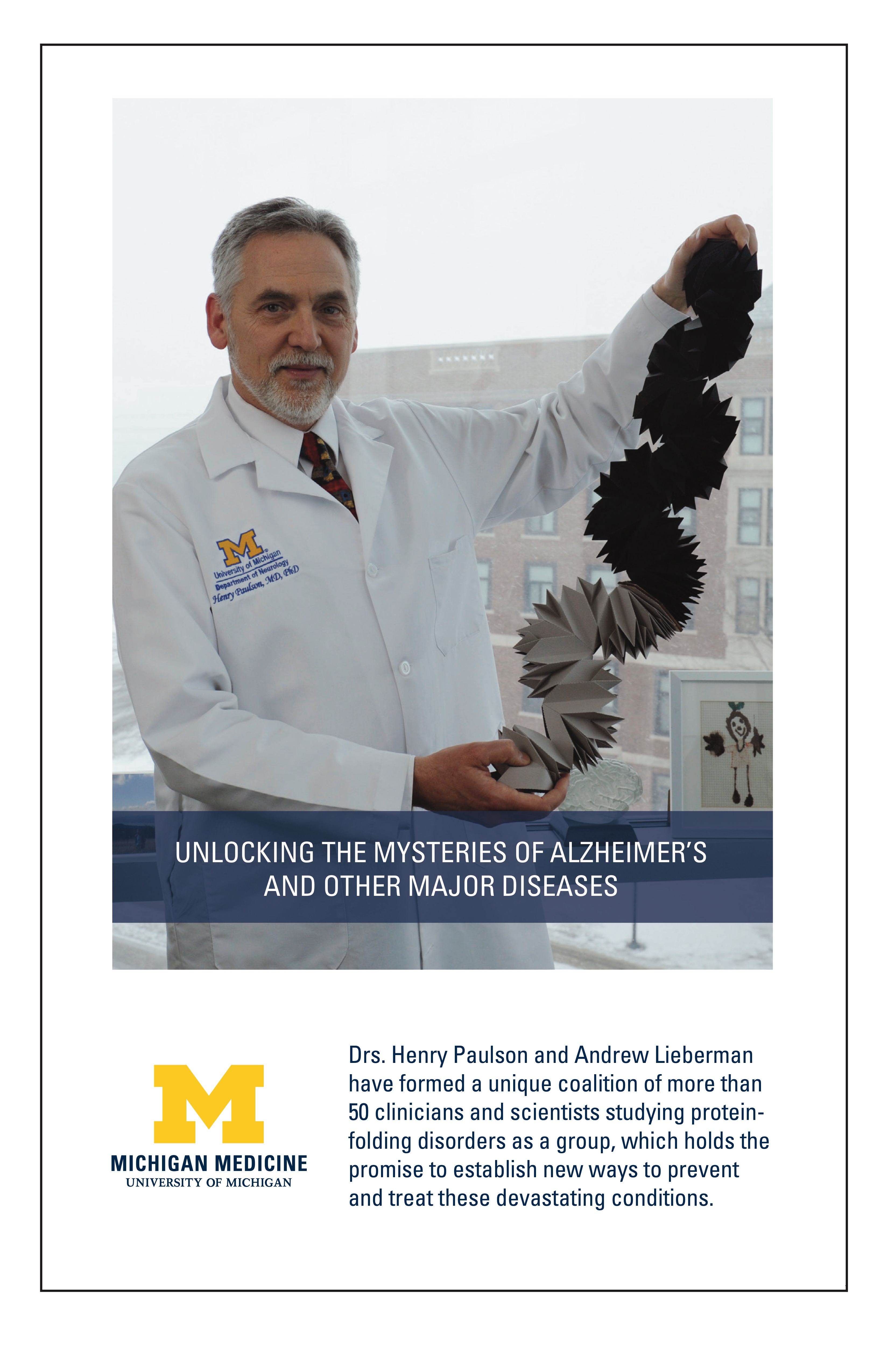 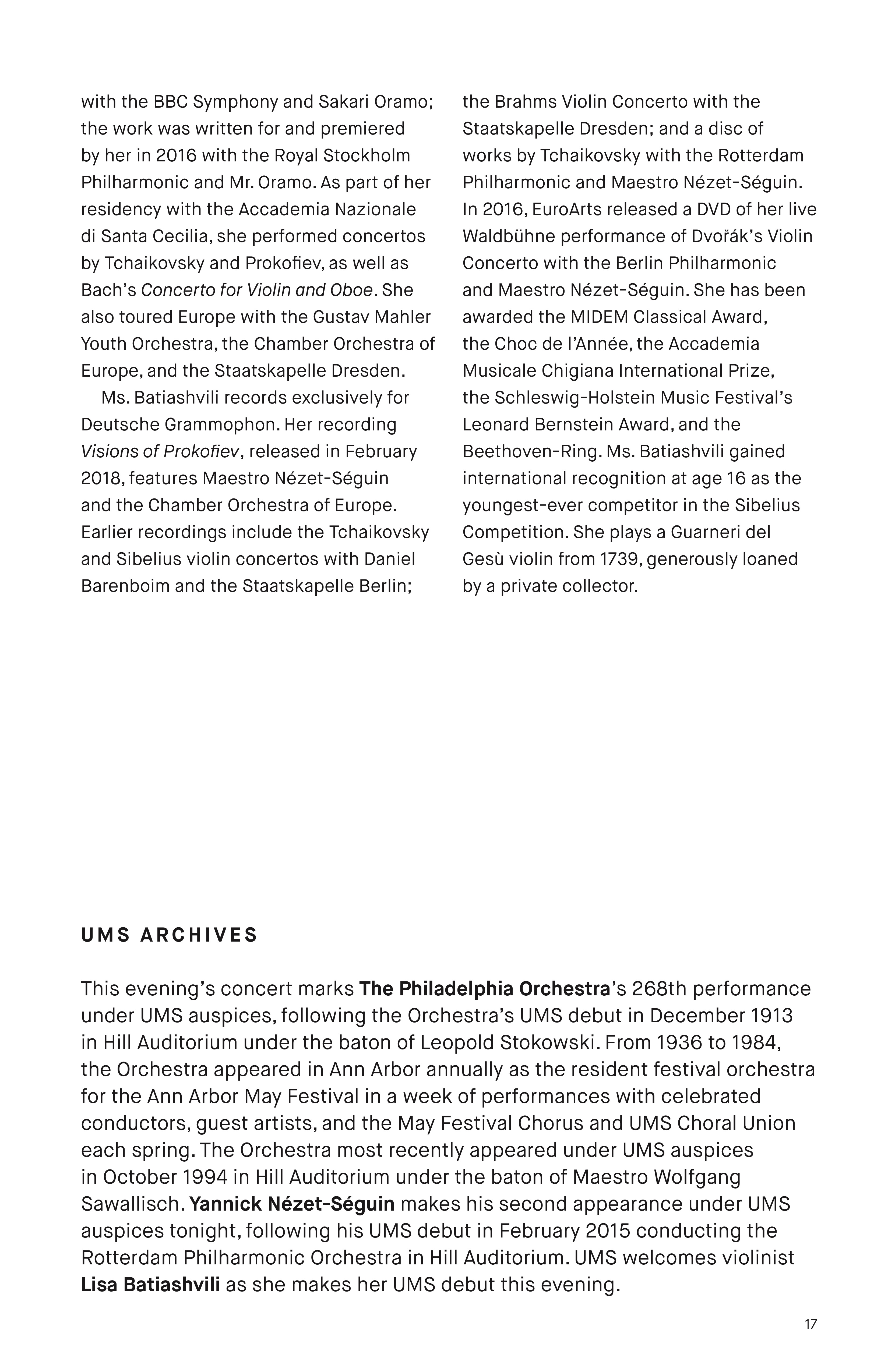 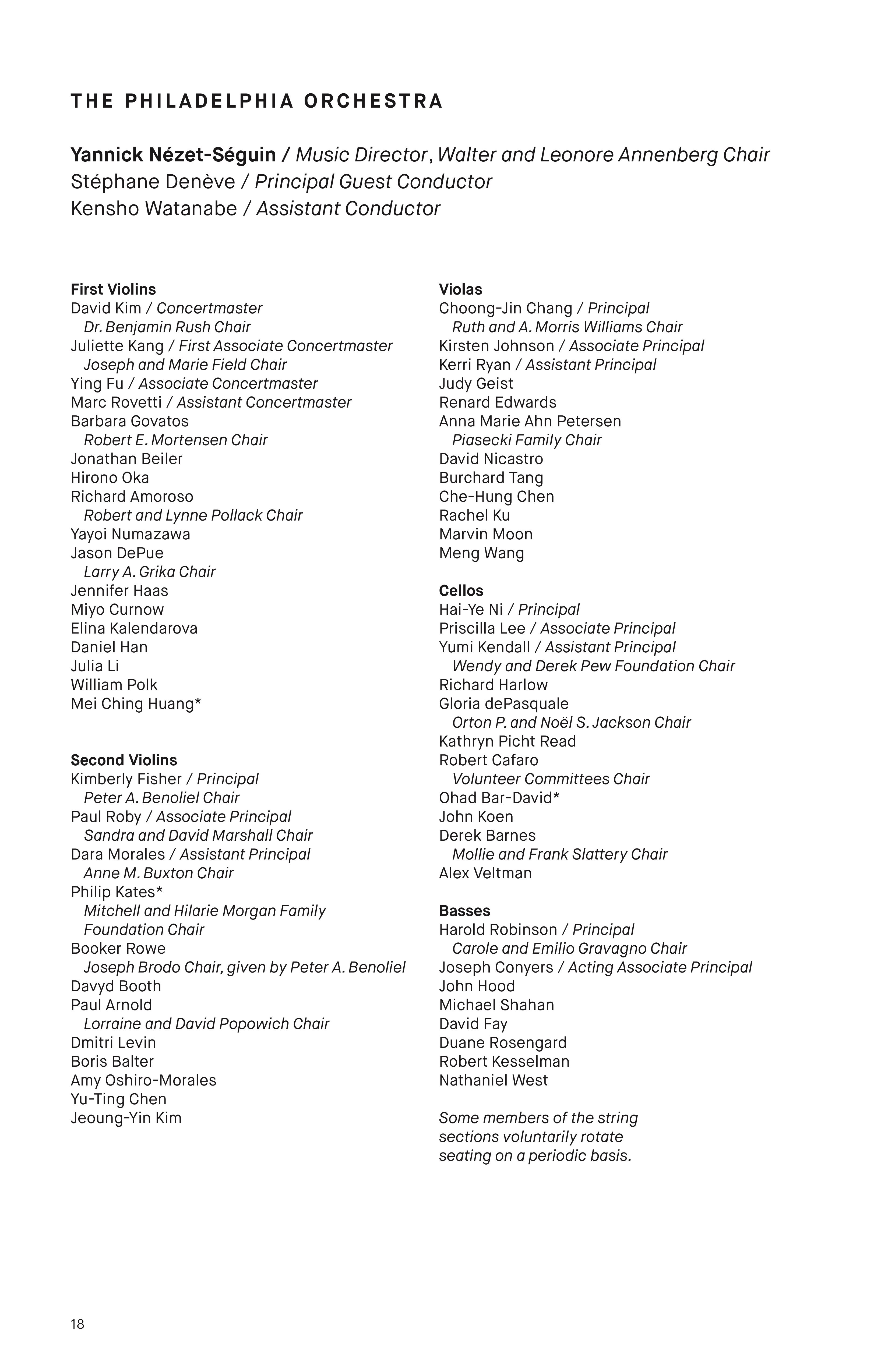 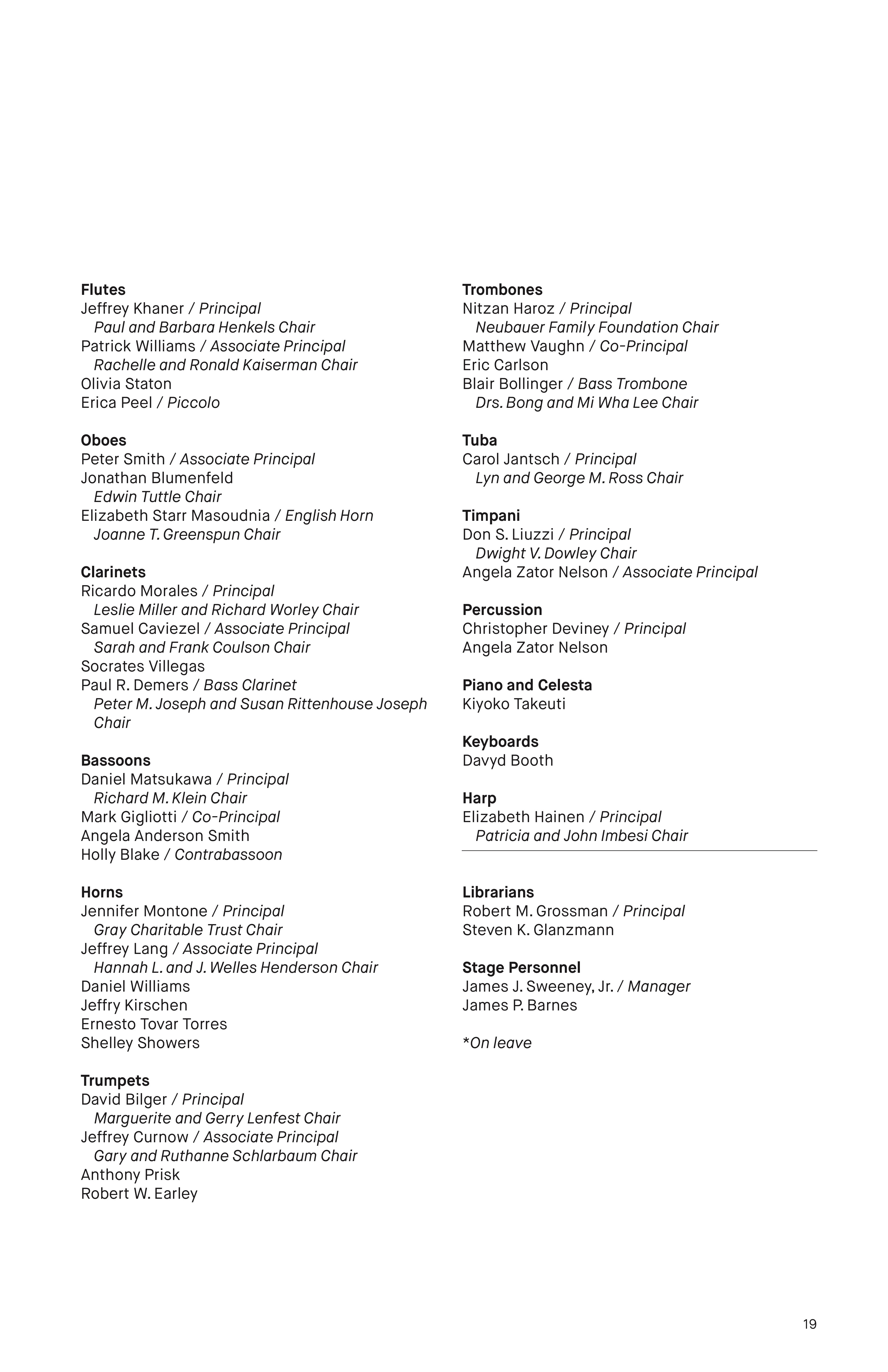 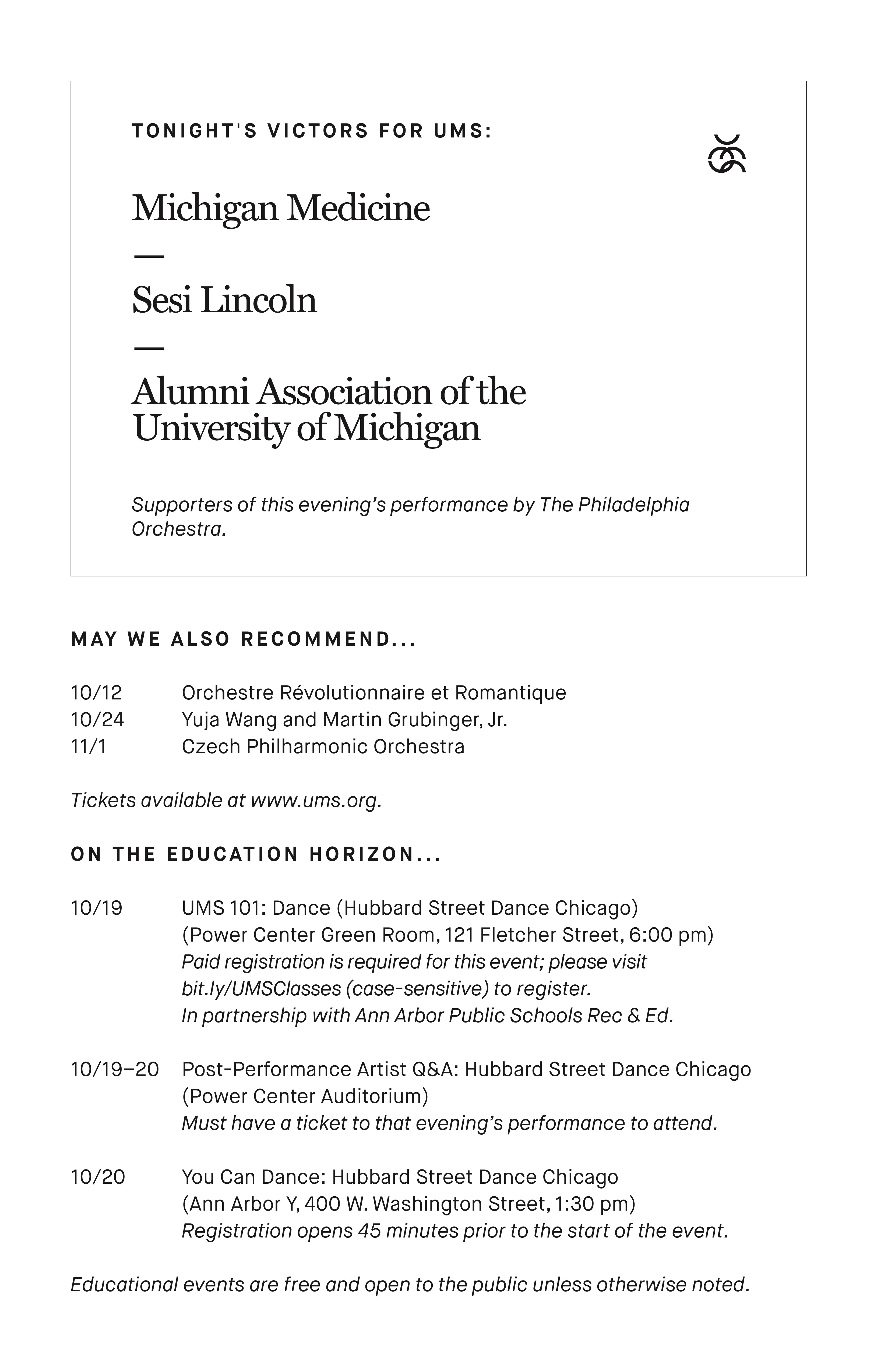 SYMPHONIC DANCES, OP. 45 (1940)
Sergei Rachmaninoff
Born April 1, 1873 in Semyonovo, Russia
Died March 28, 1943 in Beverly Hills, California
UMS premiere: Philadelphia Orchestra conducted by Eugene Ormandy; May 1942 in Hill Auditorium.
Snapshots of History...In 1940:
· The Germans invade France, Belgium, Holland, Luxembourg, Denmark, Norway, and Romania in World War II
· The  rst electron microscope is developed at RCA Laboratories · The Philadelphia Story with Katharine Hepburn and Cary Grant is
released
Sergei Rachmaninoff pursued multiple professional careers and juggled different personal identities, often out of joint with the realities of his time and place. He was a Russian who  ed his country after the 1917 Revolution and who lived in America and Europe for the rest of his life. He was a great composer who, in order to support himself and his family, spent most of his time performing, both as a conductor and as one of the towering pianists of the 20th century. And he was a Romantic composer writing in the age of burgeoning Modernism, his music embraced by audiences but seemingly coming from a bygone world alien to the stylistic innovations of Debussy, Schoenberg, Ives, Stravinsky, and other contemporaries.
Rachmaninoff worried at times that his triple professional pro le might cancel one another out. He was an unusually accomplished performer
in two domains at a time when there was, in any case, an ever-increasing separation between performer and
composer. Rachmaninoff, in the great tradition of Mozart and Beethoven through Strauss and Mahler, was the principal performing advocate of
his own music. And yet even when he was out of sync with time and place, he pressed on with a grueling performance schedule (sometimes 70 or more concerts in a year) and composed some of the most popular and enduring works of the  rst half of the 20th century.
Rachmaninoff’s last composition was the Symphonic Dances. He
had been frustrated by the hostile reception given to some of his recent pieces and perhaps sensed more than ever being stylistically old- fashioned. The exception among these later works was the Variations on a Theme of Paganini, for piano
and orchestra, which proved an immediate success and got a further boost when the choreographer Mikhail Fokine created a wildly popular ballet called Paganini, which premiered at London’s Covent Garden in June 1939. At this point,
11
Rachmaninoff and his wife were living in a comfortable oceanside estate on Long Island, where Fokine and other celebrated Russians were neighbors. Rachmaninoff had never completed a ballet (unlike most of his great Russian precursors and contemporaries) and wondered whether Fokine might be interested in creating a new piece. (Fokine’s death ended those hopes.)
Another great satisfaction came
in late 1939, when The Philadelphia Orchestra presented a “Rachmaninoff Cycle” in Philadelphia and in New York City. The next summer, at age
67, he was inspired to compose for the  rst time in several years. He informed Eugene Ormandy: “Last week I  nished a new symphonic piece, which I naturally want to give  rst to you and your orchestra. It is called Fantastic Dances. I shall now begin the orchestration. Unfortunately my concert tour begins on October 14. I have a great deal of practice to do and I don’t know whether I shall be able to  nish the orchestration before November. I should be very glad if, upon your return, you would drop over to our place. I should like to play the piece for you.”
The Symphonic Dances premiered successfully in Philadelphia, although it was less well received a few days later in New York. With time, the piece established itself as a dazzling and vibrant compositional farewell, one with poignant private echoes and resonances. It is also a reminder
that although Rachmaninoff was a towering pianist and wrote  ve great works for piano and orchestra, he was also a gifted conductor who composed many pieces that do not
involve the piano at all, from operas to evocative large a cappella choral works, three symphonies, and this  nal orchestral masterpiece.
Rachmaninoff initially thought
of titling the three movements “Daytime,” “Twilight,” and “Midnight,” but ultimately decided against it. The  rst movement (“Non allegro”) gets off to a rather subdued start, but quickly becomes more energetic as a rather menacing march. It is notable for its use of
solo saxophone, an indication of Rachmaninoff’s interest in jazz.
There is a slower middle part and coda, where he quotes the brooding opening theme of his First Symphony. Since in 1940 he — and everyone
else — thought the score of that work was lost (it was discovered a few years after his death), the reference is entirely personal. The magical scoring at this point, with strings evocatively accompanied by piccolo,  utes, piano, harp, and glockenspiel, makes what had originally seemed aggressive more than 40 years earlier in the
First Symphony now appear calm and serene.
The “Andante con moto” offers a soloistic, leisurely, melancholy, and mysterious mood in what is marked “tempo of a waltz” with a grander, faster, and more excited ending. The  nale begins with a brief slow section (“Lento assai”) followed by a lively dance with constantly changing meters (“Allegro vivace”). After a slower middle section, the ending has further personal resonances. It is the last time Rachmaninoff uses the “Dies irae” chant from the Mass of the Dead, which had become something of his signature tune, beginning with
12
his First Symphony, and appears
in many other compositions. He also recalls music he had used in his choral All-Night Vigil nearly 30 years earlier, and here marks the score “Alliluya” (to use the Russian spelling). At the very end, he wrote the words, “I thank Thee, Lord.”
Program note by Christopher H. Gibbs.
Program notes © 2018. All rights reserved. Program notes may not be reprinted without written permission from The Philadelphia Orchestra Association and/or Benjamin Pesetsky.
THE ALUMNI ASSOCIATION DOESN’T HELP FURTHER AN EDUCATION
UMALUMNI.COM/DEBUNKTHEMYTH

ARTISTS
Music Director Yannick Nézet-Séguin
will lead The Philadelphia Orchestra through at least the 2025–26 season, an extraordinary and signi cant long-term commitment. Additionally, he became the third music director of the Metropolitan Opera, beginning with the 2018–19 season. Maestro Nézet-Séguin, who holds the Walter and Leonore Annenberg Chair, is
an inspired leader of The Philadelphia Orchestra. His intensely collaborative style, deeply rooted musical curiosity, and boundless enthusiasm, paired with a fresh approach to orchestral programming, have been heralded by critics and audiences alike. The New York Times has called
him “phenomenal,” adding that under
his baton, “the ensemble, famous for its glowing strings and homogenous richness, has never sounded better.”
Maestro Nézet-Séguin has established himself as a musical leader of the highest caliber and one of the most thrilling talents of his generation. He has been artistic director and principal conductor of Montreal’s Orchestre Métropolitain since 2000, and in summer 2017, he became
an honorary member of the Chamber Orchestra of Europe. He was music director of the Rotterdam Philharmonic from 2008–2018 (he is now honorary conductor) and was principal guest conductor of the London Philharmonic from 2008–2014. He has made wildly successful appearances with the world’s most revered ensembles and has conducted critically acclaimed performances at many of the leading opera houses.
Maestro Nézet-Séguin signed an exclusive recording contract with Deutsche Grammophon (DG) in May 2018. Under his leadership, The Philadelphia Orchestra returned to recording with three
CDs on that label. His upcoming recordings will include projects with The Philadelphia Orchestra, the Metropolitan Opera, the Chamber Orchestra of Europe, and the Orchestre Métropolitain, with which he will also continue to record for ATMA Classique. Additionally, he has recorded with the Rotterdam Philharmonic on DG, EMI Classics, and BIS Records, and the London Philharmonic for the LPO label.
A native of Montreal, Maestro Nézet- Séguin studied piano, conducting, composition, and chamber music at Montreal’s Conservatory of Music and continued his studies with renowned conductor Carlo Maria Giulini; he also studied choral conducting with Joseph Flummerfelt at Westminster Choir College. Among his honors are an appointment as Companion of the Order of Canada; an Of cer of the Order of Montreal; Musical America’s 2016 “Artist of the Year”; the Prix Denise-Pelletier; and honorary doctorates from the University of Quebec in Montreal, the Curtis Institute of Music, Westminster Choir College of Rider University,
McGill University, and the University of Pennsylvania.
The Philadelphia Orchestra is one of
the preeminent orchestras in the world, renowned for its distinctive sound, desired for its keen ability to capture the hearts and imaginations of audiences, and admired for a legacy of imagination and innovation on and off the concert stage. The Orchestra is inspiring the future and transforming its rich tradition of achievement, sustaining the highest level of artistic quality, but also challenging — and exceeding — that level, by creating powerful musical experiences for audiences at home and around the world.
14
Music Director Yannick Nézet-Séguin’s connection to the Orchestra’s musicians has been praised by both concertgoers and critics since his inaugural season
in 2012. Under his leadership, the Orchestra returned to recording, with three celebrated CDs on the prestigious Deutsche Grammophon label, continuing its history of recording success. The Orchestra also reaches thousands
of listeners on the radio with weekly broadcasts on WRTI-FM and SiriusXM.
Philadelphia is home, and the Orchestra continues to discover new and inventive ways to nurture its relationship with its loyal patrons at its home in the Kimmel Center, and also with those who enjoy
the Orchestra’s area performances at the Mann Center, Penn’s Landing, and other cultural, civic, and learning venues. The Orchestra maintains a strong commitment to collaborations with cultural and community organizations on a regional and national level, all of which create greater access and engagement with classical music as an art form.
The Philadelphia Orchestra serves
as a catalyst for cultural activity across Philadelphia’s many communities, building an offstage presence as strong as its onstage one. With Maestro Nézet-Séguin, a dedicated body of musicians, and one of the nation’s richest arts ecosystems, the Orchestra has launched its HEAR initiative, a portfolio of integrated initiatives
that promotes Health, champions
music Education, eliminates barriers to Accessing the orchestra, and maximizes impact through Research. The Orchestra’s award-winning Collaborative Learning programs engage over 50,000 students, families, and community members through programs such as PlayINs, side-by-sides,
PopUP concerts, free Neighborhood Concerts, School Concerts, and residency work in Philadelphia and abroad.
Through concerts, tours, residencies, presentations, and recordings, the Orchestra is a global cultural ambassador for Philadelphia and for the US. Having been the  rst American orchestra to perform in the People’s Republic of China, in 1973 at the request of President Nixon, the ensemble today boasts  ve-year partnerships with Beijing’s National Centre for the Performing Arts and the Shanghai Media Group. In 2018, the Orchestra traveled to Europe and Israel. The Orchestra performs annually at Carnegie Hall while also enjoying summer residencies in Saratoga Springs and Vail. For more information on The Philadelphia Orchestra, please visit www.philorch.org.
Violinist Lisa Batiashvili was Musical America’s 2015 “Instrumentalist of the Year” and nominated as Gramophone’s 2017 “Artist of the Year.” The Georgian violinist, who has lived in Germany for over 25 years, has developed long- standing relationships with some of the world’s leading orchestras, including the New York and Berlin philharmonics, the Staatskapelle Berlin, Zurich’s Tonhalle Orchestra, the Chamber Orchestra of Europe, and the London Symphony. She made her Philadelphia Orchestra debut in 2005 and toured Europe with the ensemble and Yannick Nézet-Séguin
in 2015. Beginning in 2019, she will be the artistic director of the Audi Summer Concerts music festival in Ingolstadt, Germany.
Ms. Batiashvili’s recent performance highlights include the UK premiere of Anders Hillborg’s Violin Concerto No. 2
15
UNLOCKING THE MYSTERIES OF ALZHEIMER’S AND OTHER MAJOR DISEASES
Drs. Henry Paulson and Andrew Lieberman have formed a unique coalition of more than 50 clinicians and scientists studying protein- folding disorders as a group, which holds the promise to establish new ways to prevent and treat these devastating conditions.