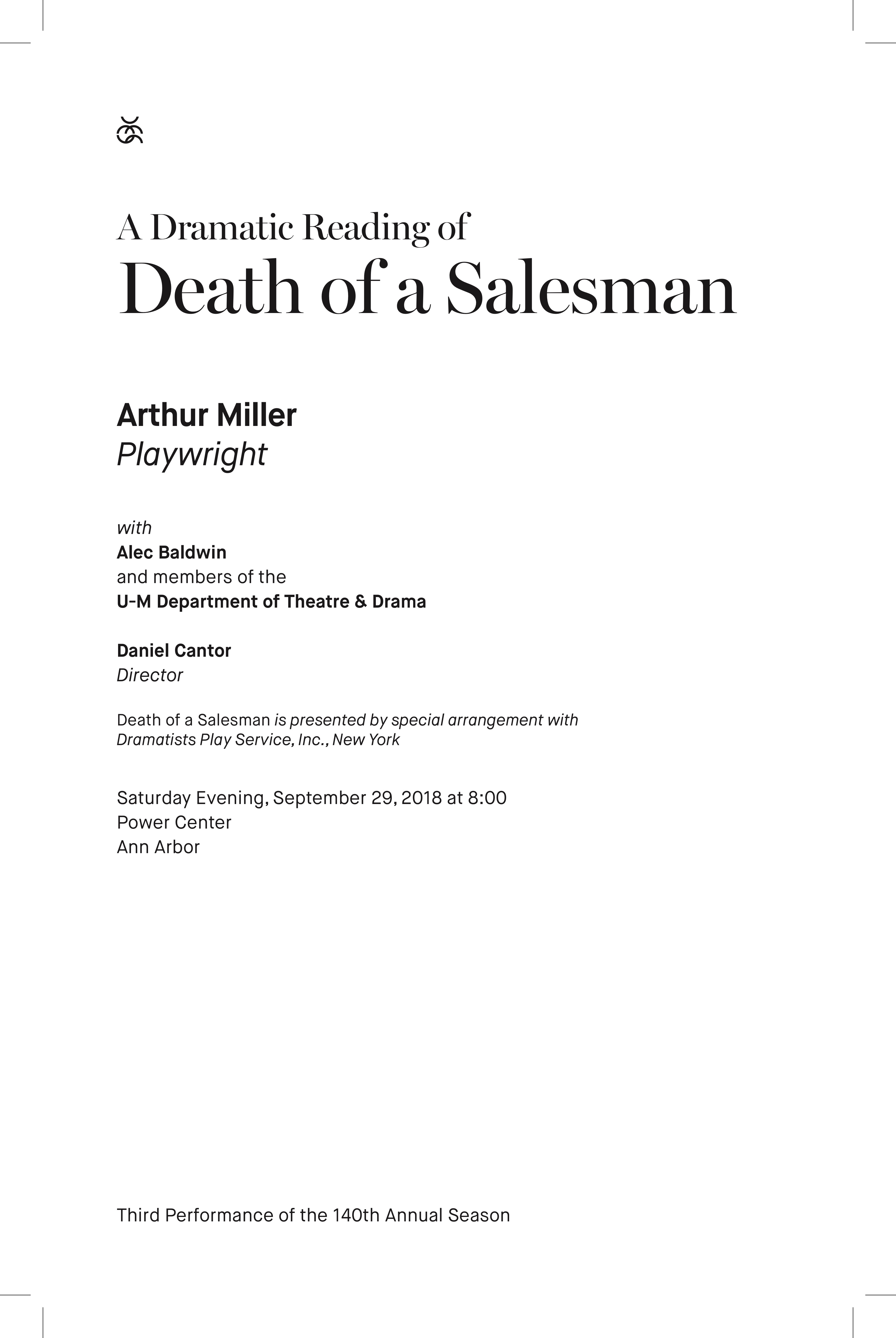 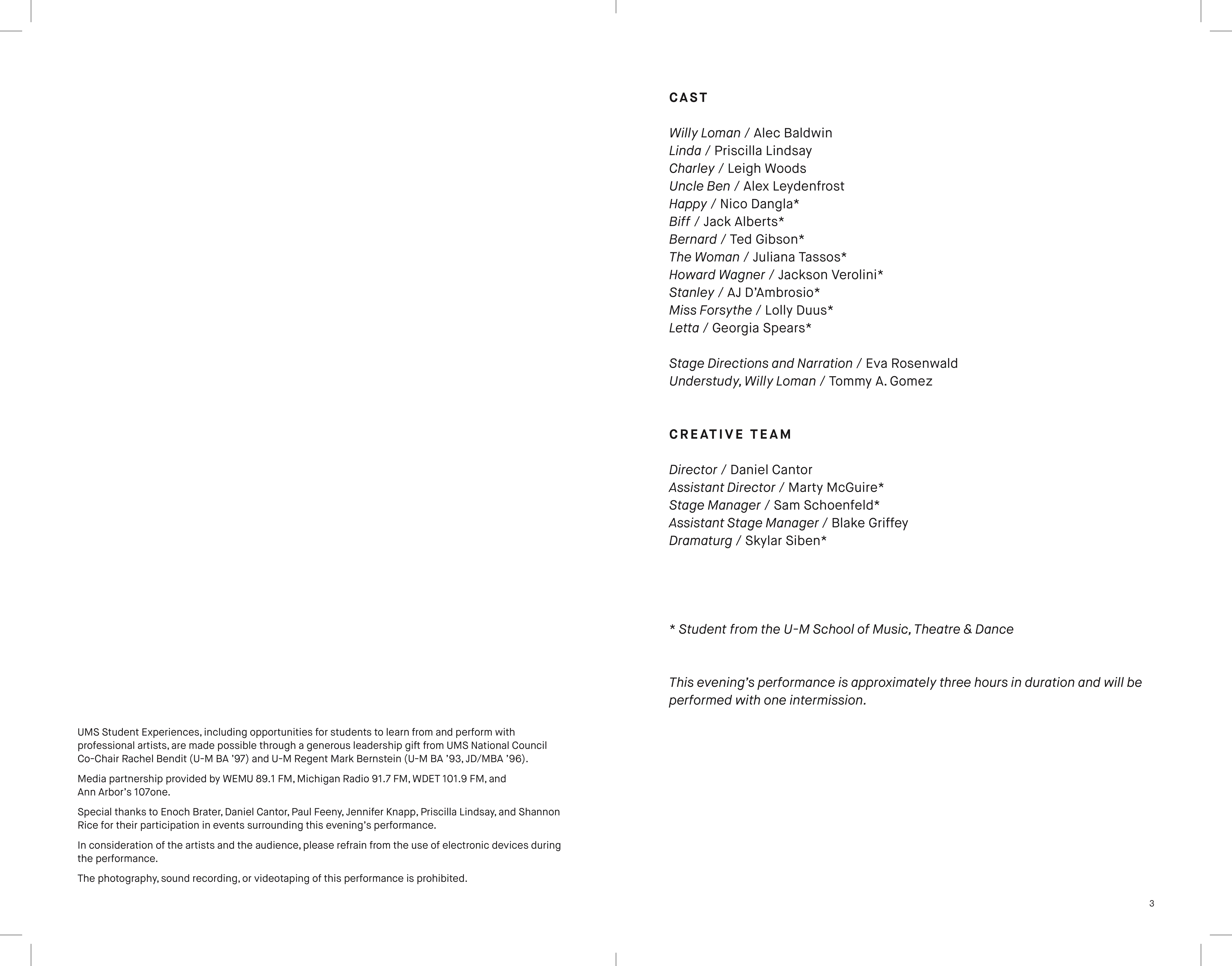 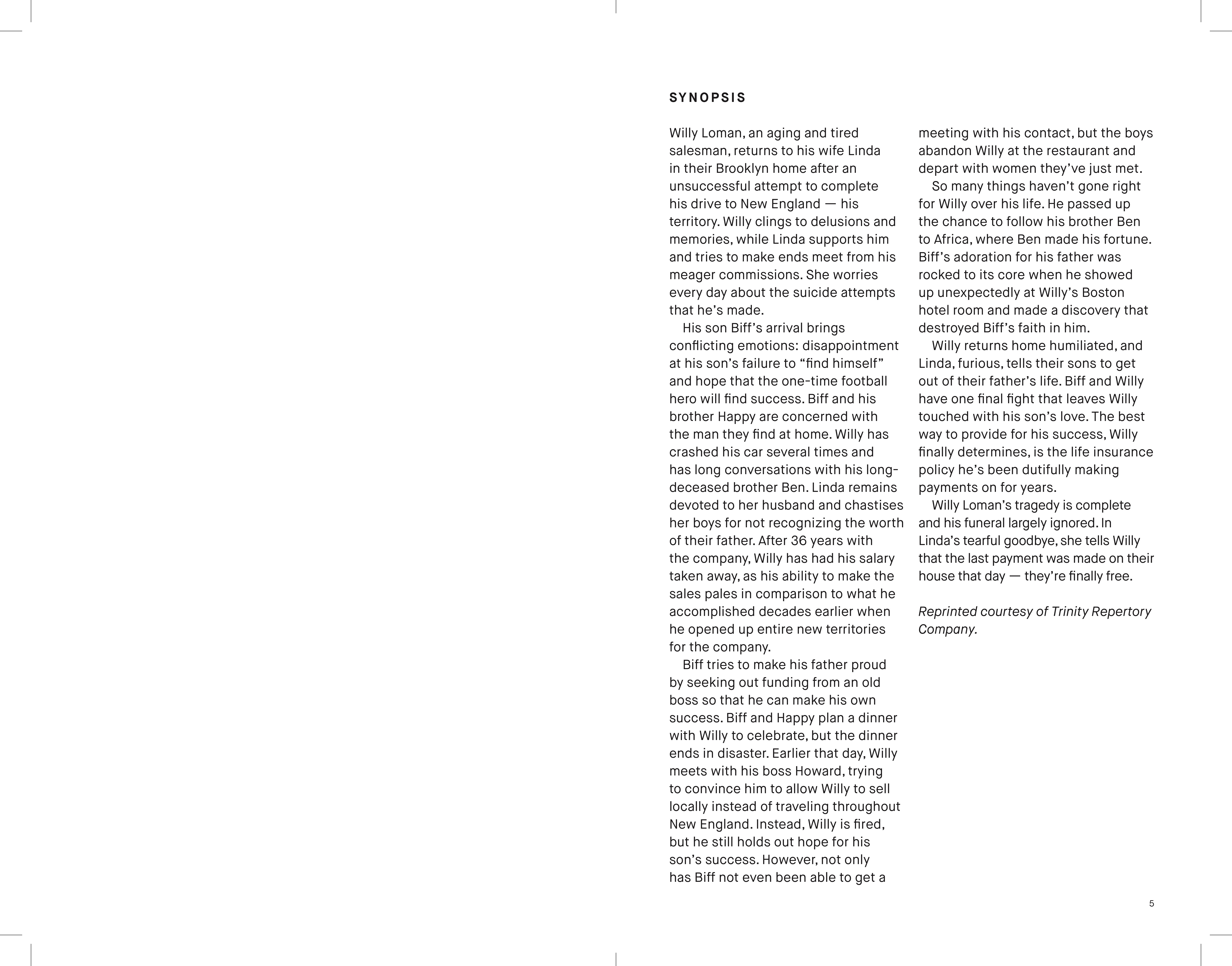 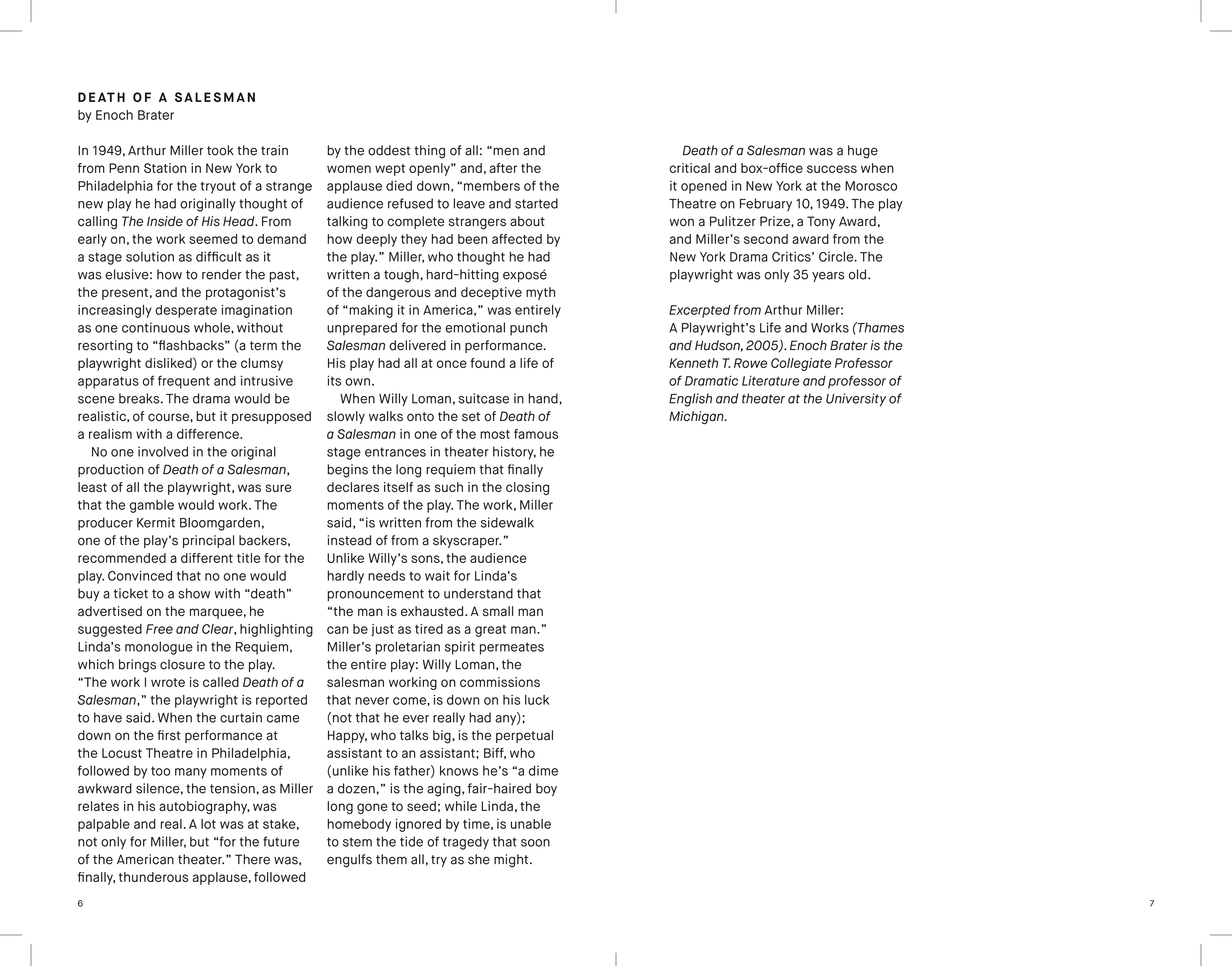 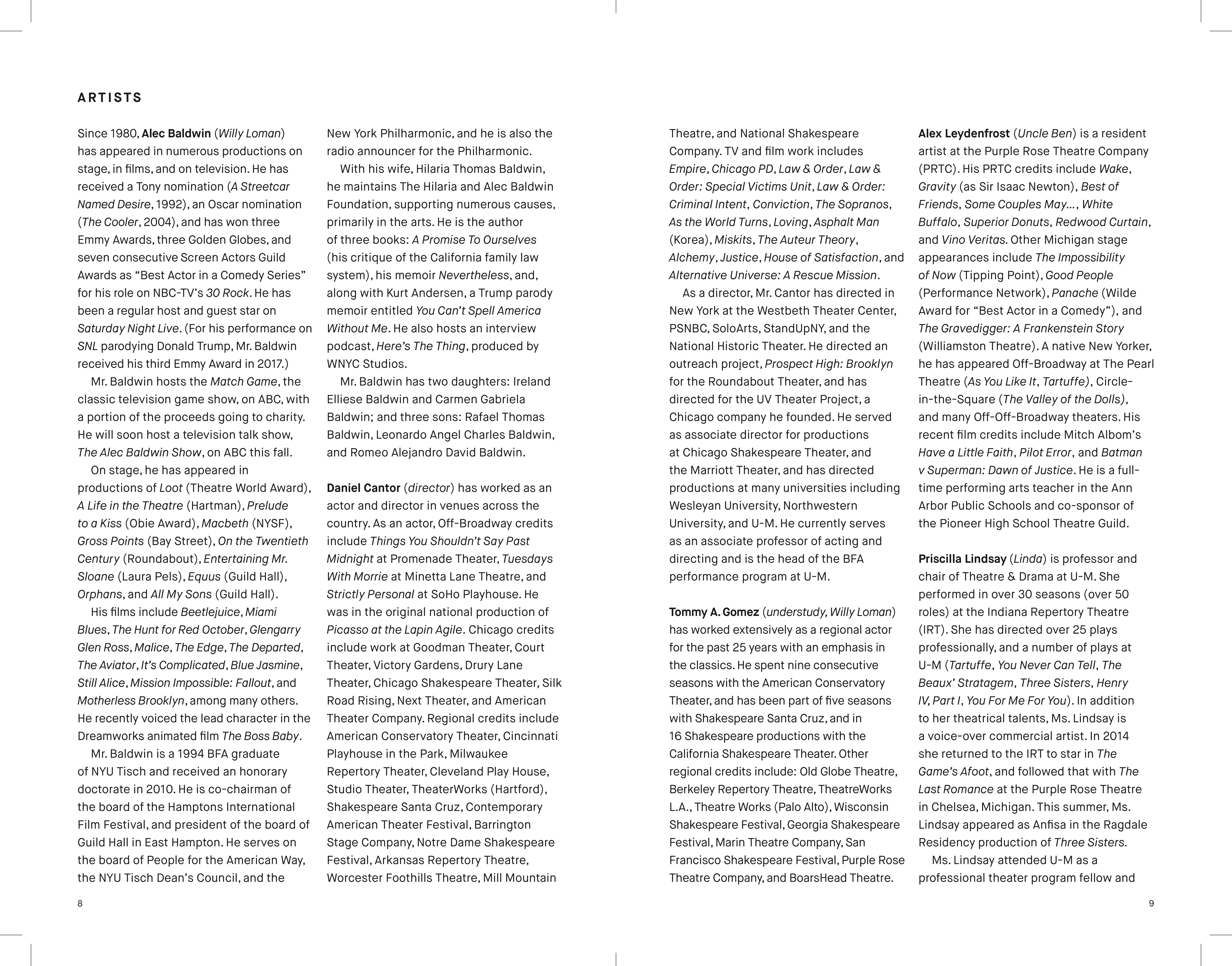 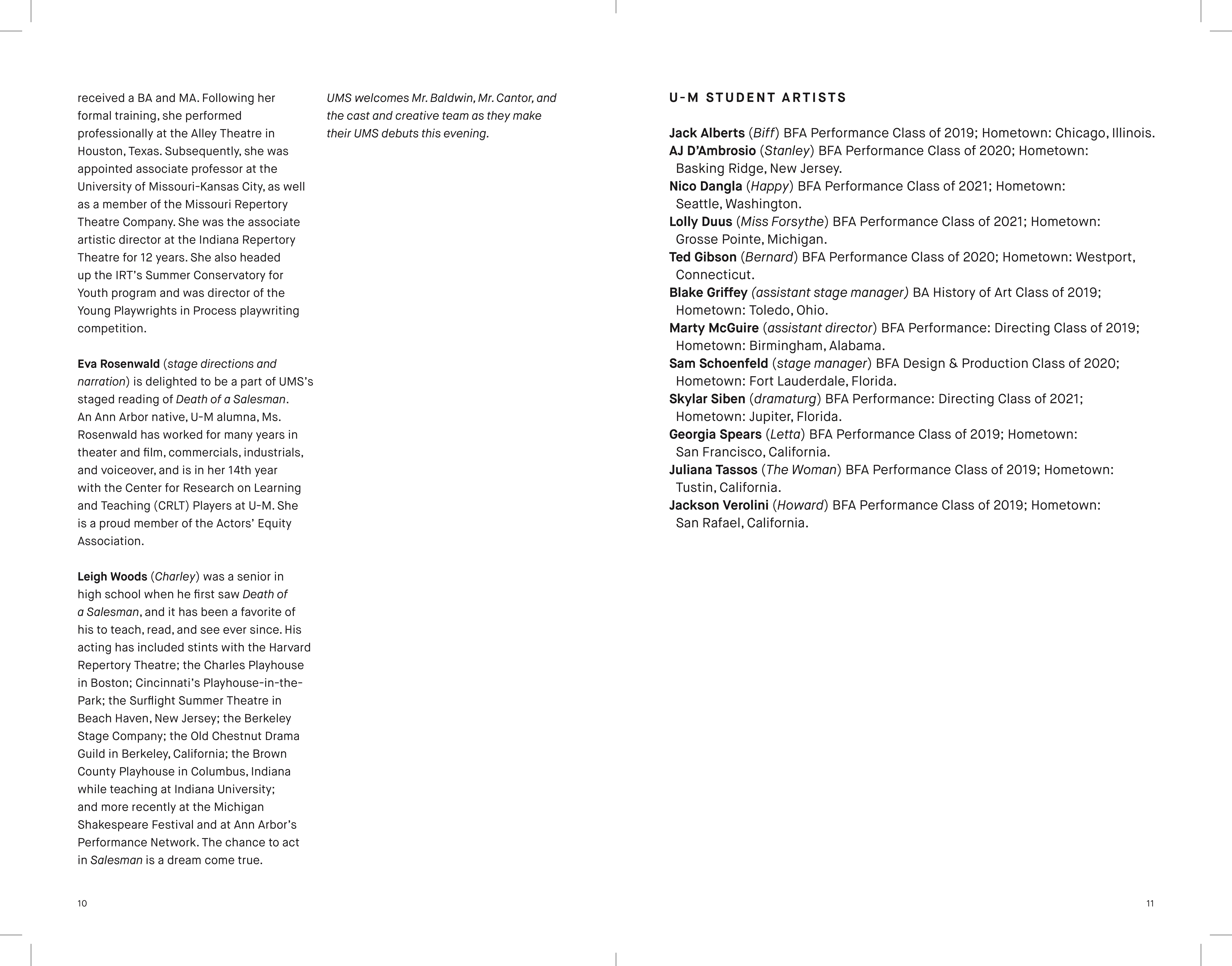 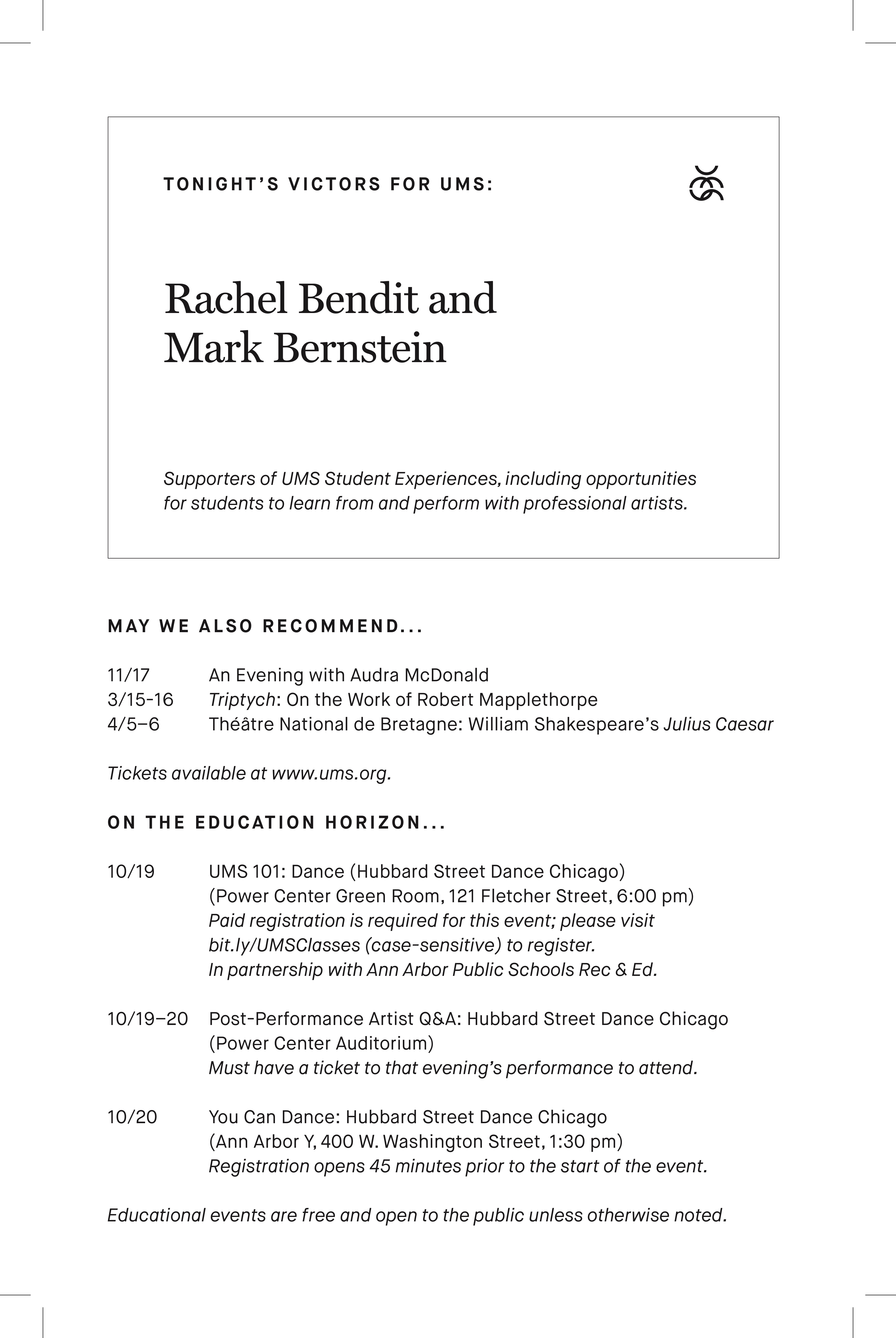 SYNOPSIS
Willy Loman, an aging and tired salesman, returns to his wife Linda
in their Brooklyn home after an unsuccessful attempt to complete his drive to New England — his territory. Willy clings to delusions and memories, while Linda supports him and tries to make ends meet from his meager commissions. She worries every day about the suicide attempts that he’s made.
His son Biff’s arrival brings con icting emotions: disappointment at his son’s failure to “ nd himself” and hope that the one-time football hero will  nd success. Biff and his brother Happy are concerned with
the man they  nd at home. Willy has crashed his car several times and
has long conversations with his long- deceased brother Ben. Linda remains devoted to her husband and chastises her boys for not recognizing the worth of their father. After 36 years with
the company, Willy has had his salary taken away, as his ability to make the sales pales in comparison to what he accomplished decades earlier when he opened up entire new territories for the company.
Biff tries to make his father proud by seeking out funding from an old boss so that he can make his own success. Biff and Happy plan a dinner with Willy to celebrate, but the dinner ends in disaster. Earlier that day, Willy meets with his boss Howard, trying
to convince him to allow Willy to sell locally instead of traveling throughout New England. Instead, Willy is  red, but he still holds out hope for his son’s success. However, not only
has Biff not even been able to get a
meeting with his contact, but the boys abandon Willy at the restaurant and depart with women they’ve just met.
So many things haven’t gone right for Willy over his life. He passed up the chance to follow his brother Ben to Africa, where Ben made his fortune. Biff’s adoration for his father was rocked to its core when he showed up unexpectedly at Willy’s Boston hotel room and made a discovery that destroyed Biff’s faith in him.
Willy returns home humiliated, and Linda, furious, tells their sons to get out of their father’s life. Biff and Willy have one  nal  ght that leaves Willy touched with his son’s love. The best way to provide for his success, Willy  nally determines, is the life insurance policy he’s been dutifully making payments on for years.
Willy Loman’s tragedy is complete and his funeral largely ignored. In Linda’s tearful goodbye, she tells Willy that the last payment was made on their house that day — they’re  nally free.
Reprinted courtesy of Trinity Repertory Company.
5

DEATH OF A SALESMAN
by Enoch Brater
In 1949, Arthur Miller took the train from Penn Station in New York to Philadelphia for the tryout of a strange new play he had originally thought of calling The Inside of His Head. From early on, the work seemed to demand a stage solution as dif cult as it
was elusive: how to render the past, the present, and the protagonist’s increasingly desperate imagination
as one continuous whole, without resorting to “ ashbacks” (a term the playwright disliked) or the clumsy apparatus of frequent and intrusive scene breaks. The drama would be realistic, of course, but it presupposed a realism with a difference.
No one involved in the original production of Death of a Salesman, least of all the playwright, was sure that the gamble would work. The producer Kermit Bloomgarden,
one of the play’s principal backers, recommended a different title for the play. Convinced that no one would
buy a ticket to a show with “death” advertised on the marquee, he suggested Free and Clear, highlighting Linda’s monologue in the Requiem, which brings closure to the play.
“The work I wrote is called Death of a Salesman,” the playwright is reported to have said. When the curtain came down on the  rst performance at
the Locust Theatre in Philadelphia, followed by too many moments of awkward silence, the tension, as Miller relates in his autobiography, was palpable and real. A lot was at stake, not only for Miller, but “for the future of the American theater.” There was,  nally, thunderous applause, followed
by the oddest thing of all: “men and women wept openly” and, after the applause died down, “members of the audience refused to leave and started talking to complete strangers about how deeply they had been affected by the play.” Miller, who thought he had written a tough, hard-hitting exposé of the dangerous and deceptive myth of “making it in America,” was entirely unprepared for the emotional punch Salesman delivered in performance. His play had all at once found a life of its own.
When Willy Loman, suitcase in hand, slowly walks onto the set of Death of
a Salesman in one of the most famous stage entrances in theater history, he begins the long requiem that  nally declares itself as such in the closing moments of the play. The work, Miller said, “is written from the sidewalk instead of from a skyscraper.”
Unlike Willy’s sons, the audience hardly needs to wait for Linda’s pronouncement to understand that “the man is exhausted. A small man can be just as tired as a great man.” Miller’s proletarian spirit permeates the entire play: Willy Loman, the salesman working on commissions that never come, is down on his luck (not that he ever really had any); Happy, who talks big, is the perpetual assistant to an assistant; Biff, who (unlike his father) knows he’s “a dime a dozen,” is the aging, fair-haired boy long gone to seed; while Linda, the homebody ignored by time, is unable to stem the tide of tragedy that soon engulfs them all, try as she might.
Death of a Salesman was a huge critical and box-of ce success when it opened in New York at the Morosco Theatre on February 10, 1949. The play won a Pulitzer Prize, a Tony Award, and Miller’s second award from the New York Drama Critics’ Circle. The playwright was only 35 years old.
Excerpted from Arthur Miller:
A Playwright’s Life and Works (Thames and Hudson, 2005). Enoch Brater is the Kenneth T. Rowe Collegiate Professor of Dramatic Literature and professor of English and theater at the University of Michigan.
67