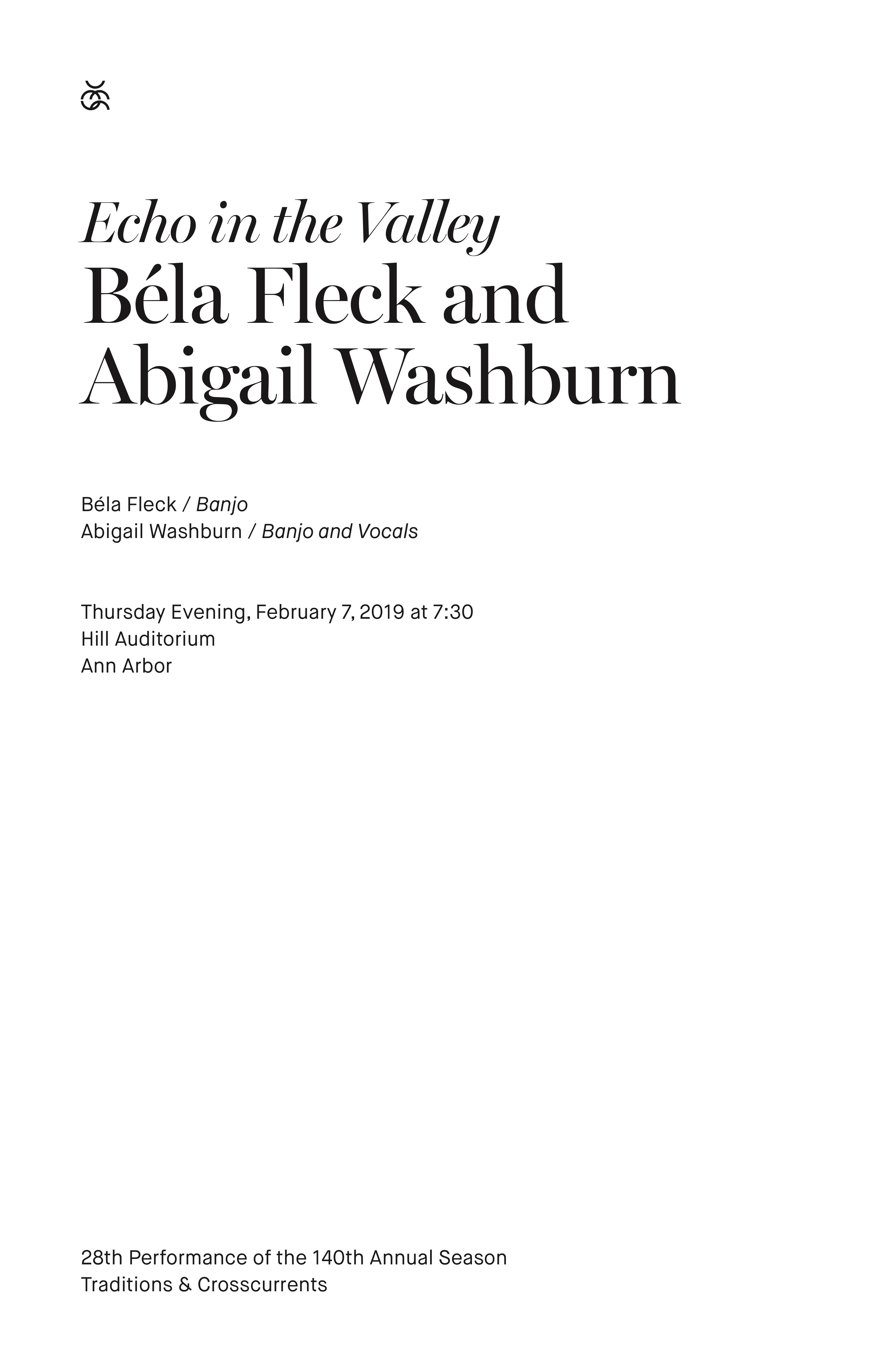 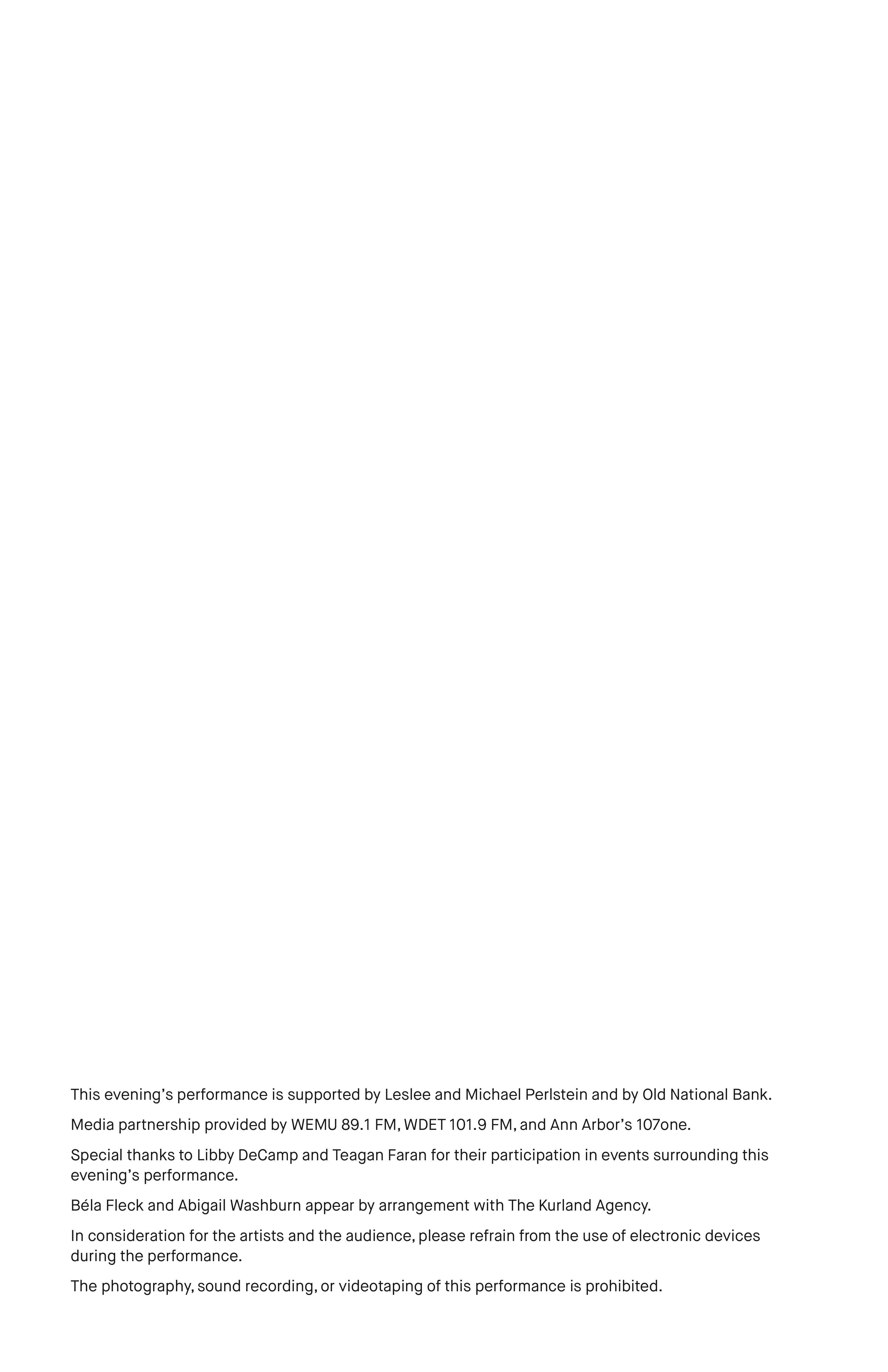 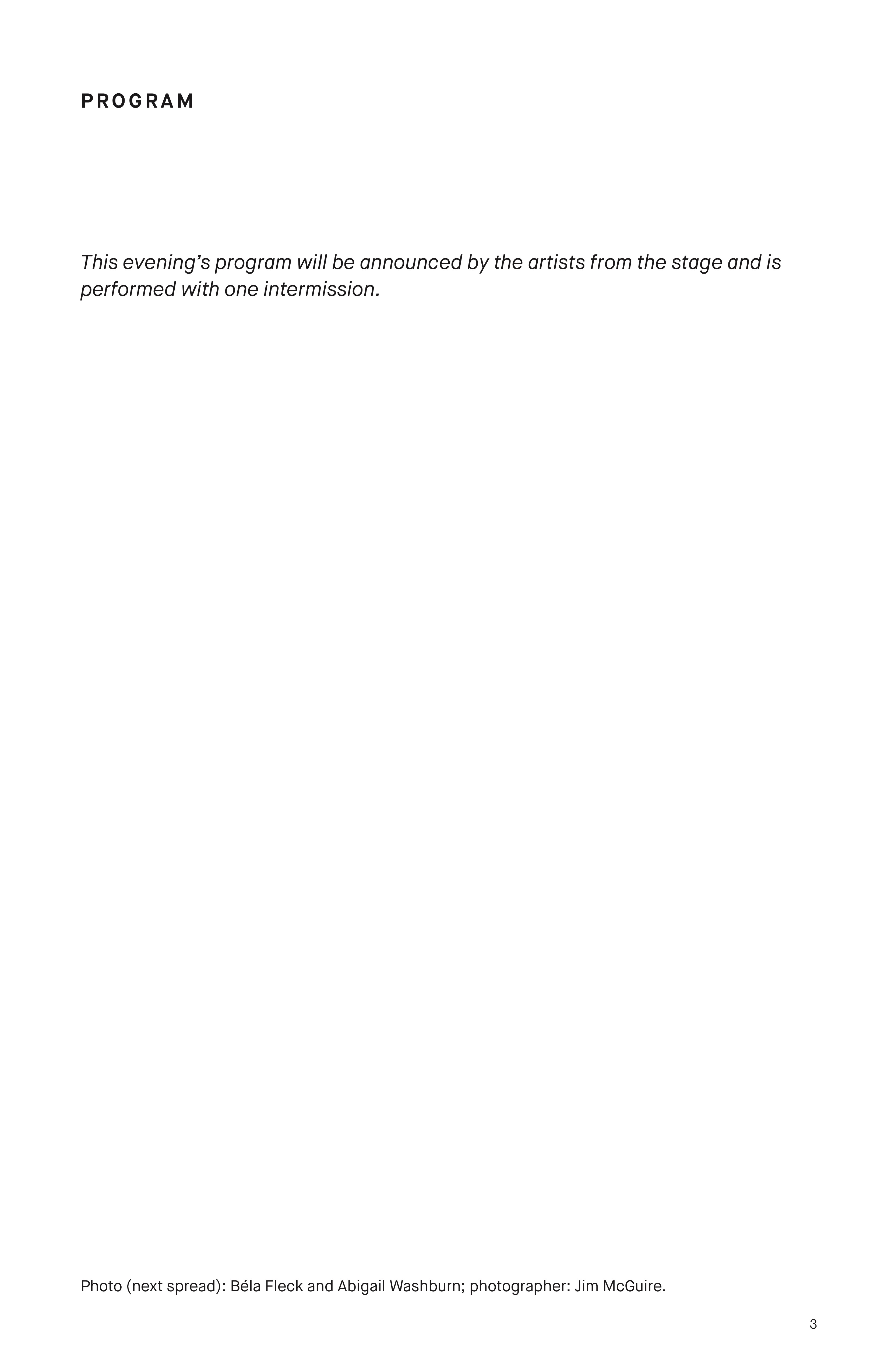 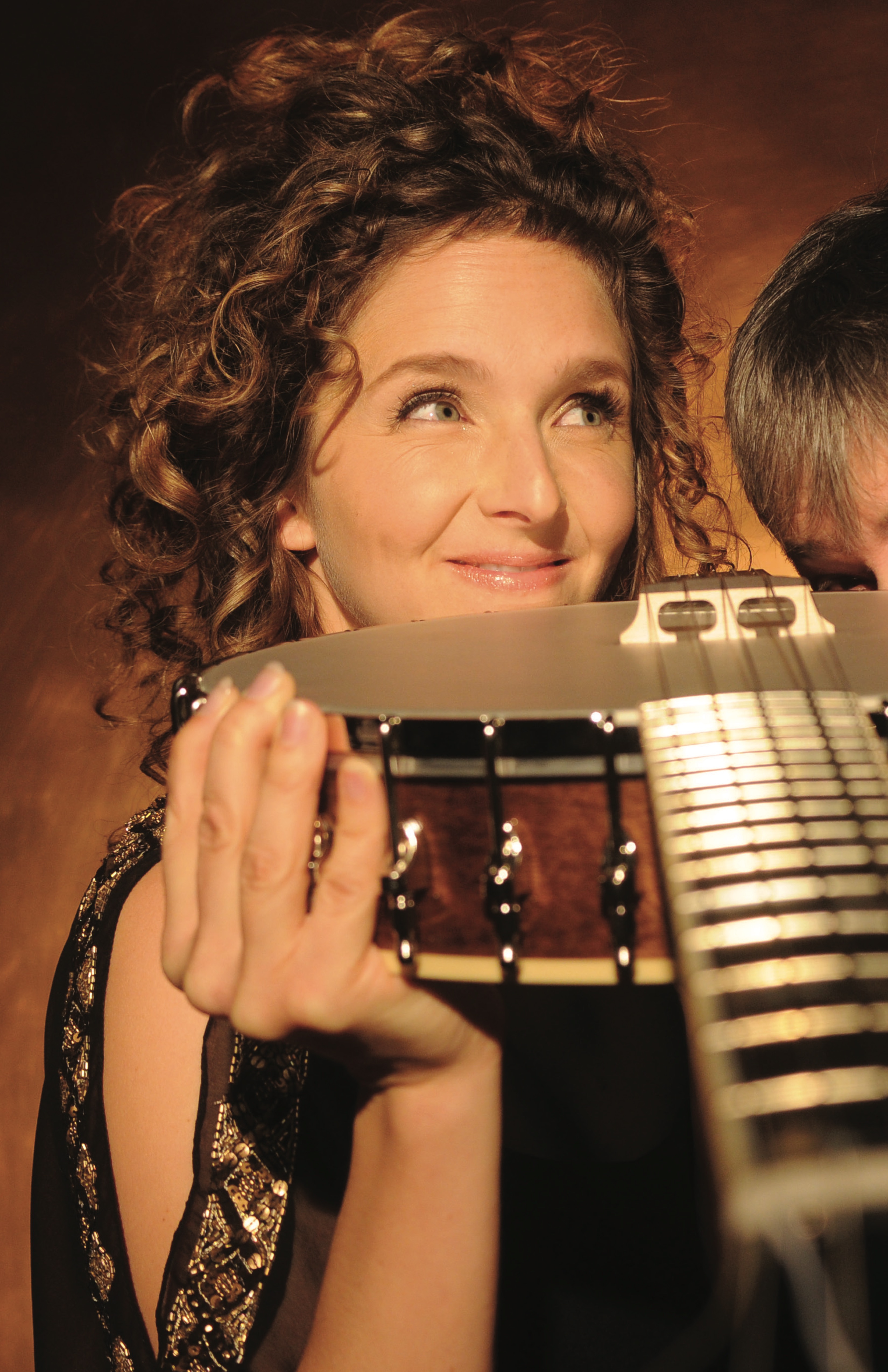 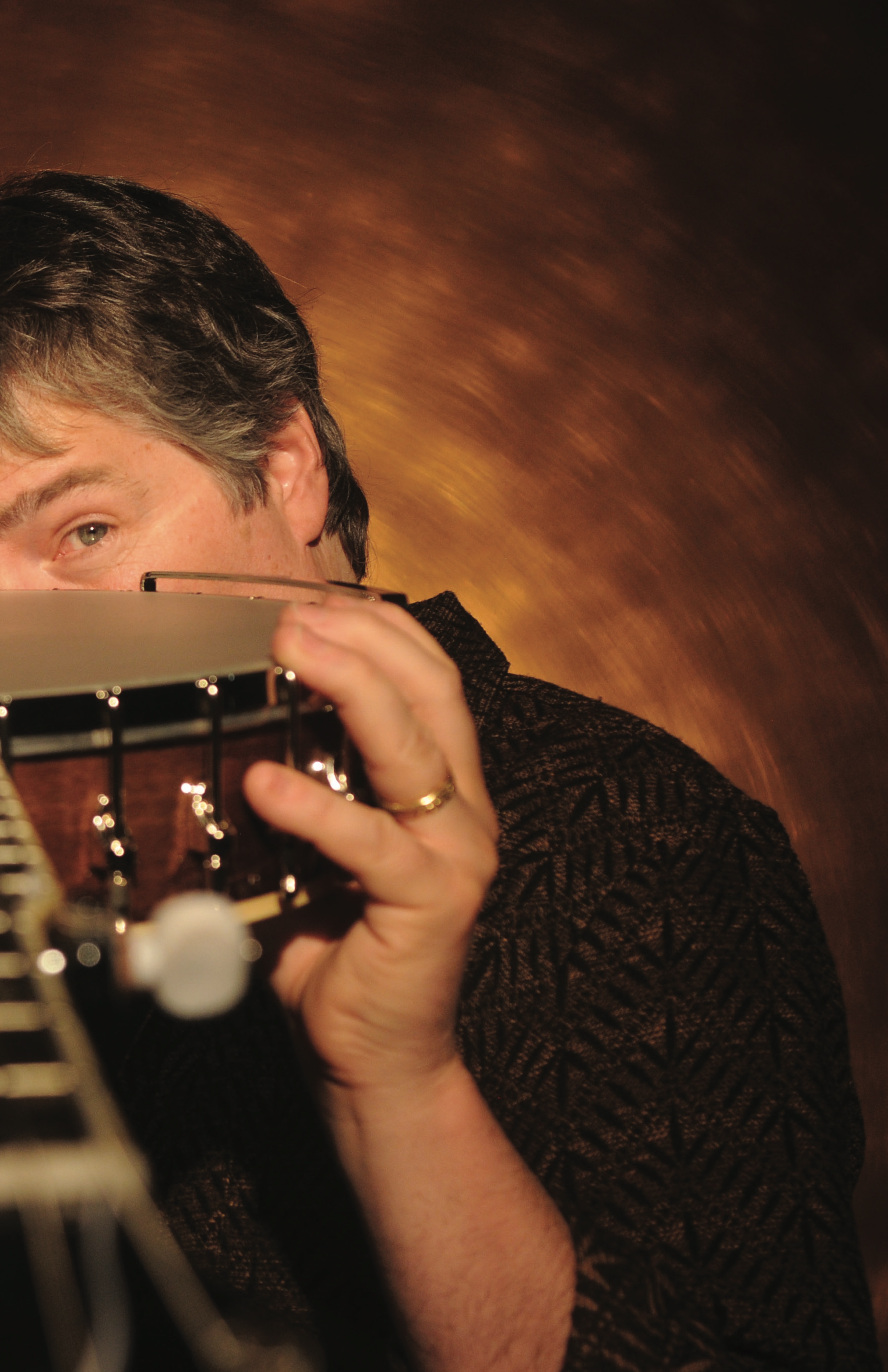 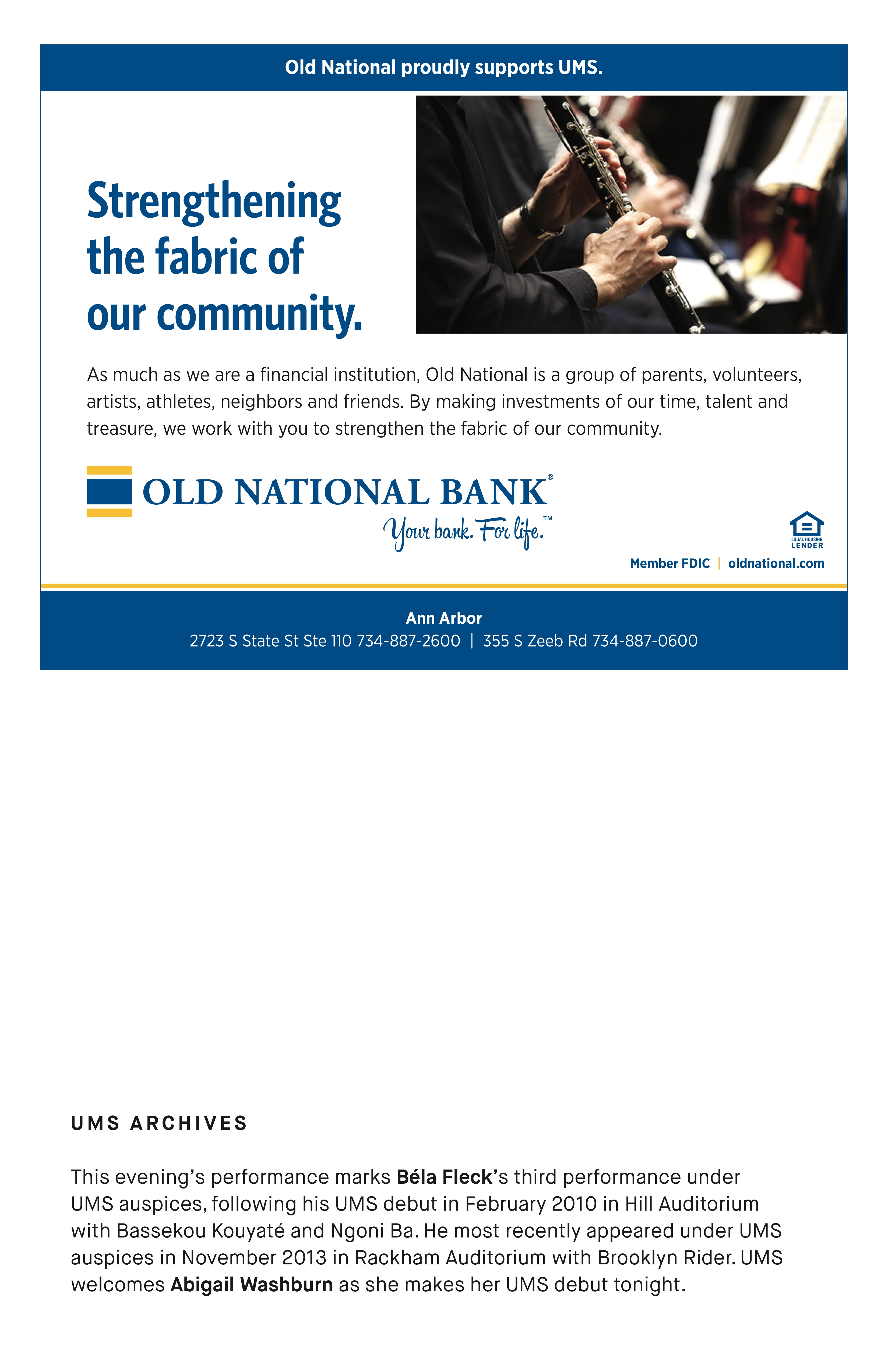 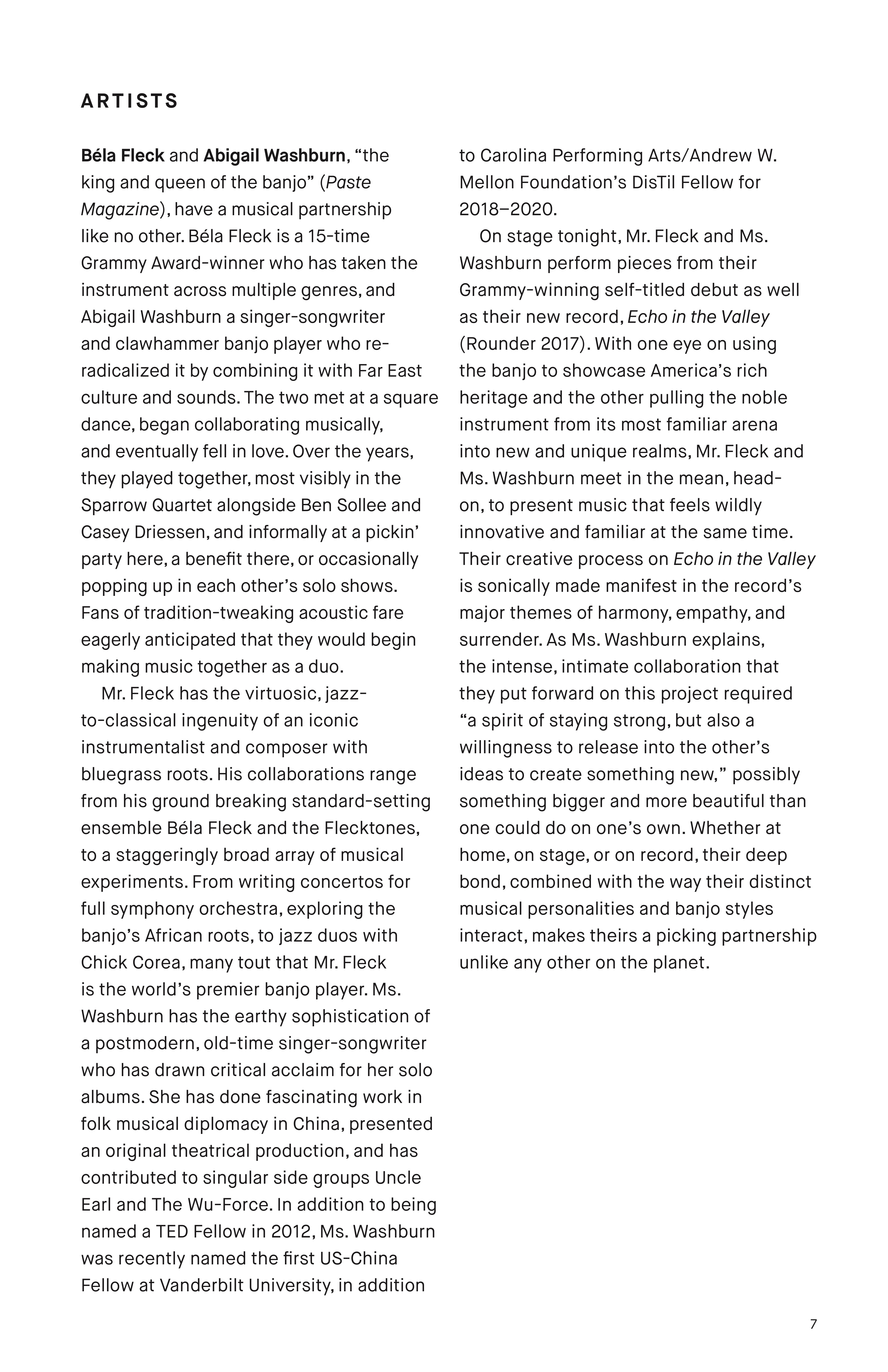 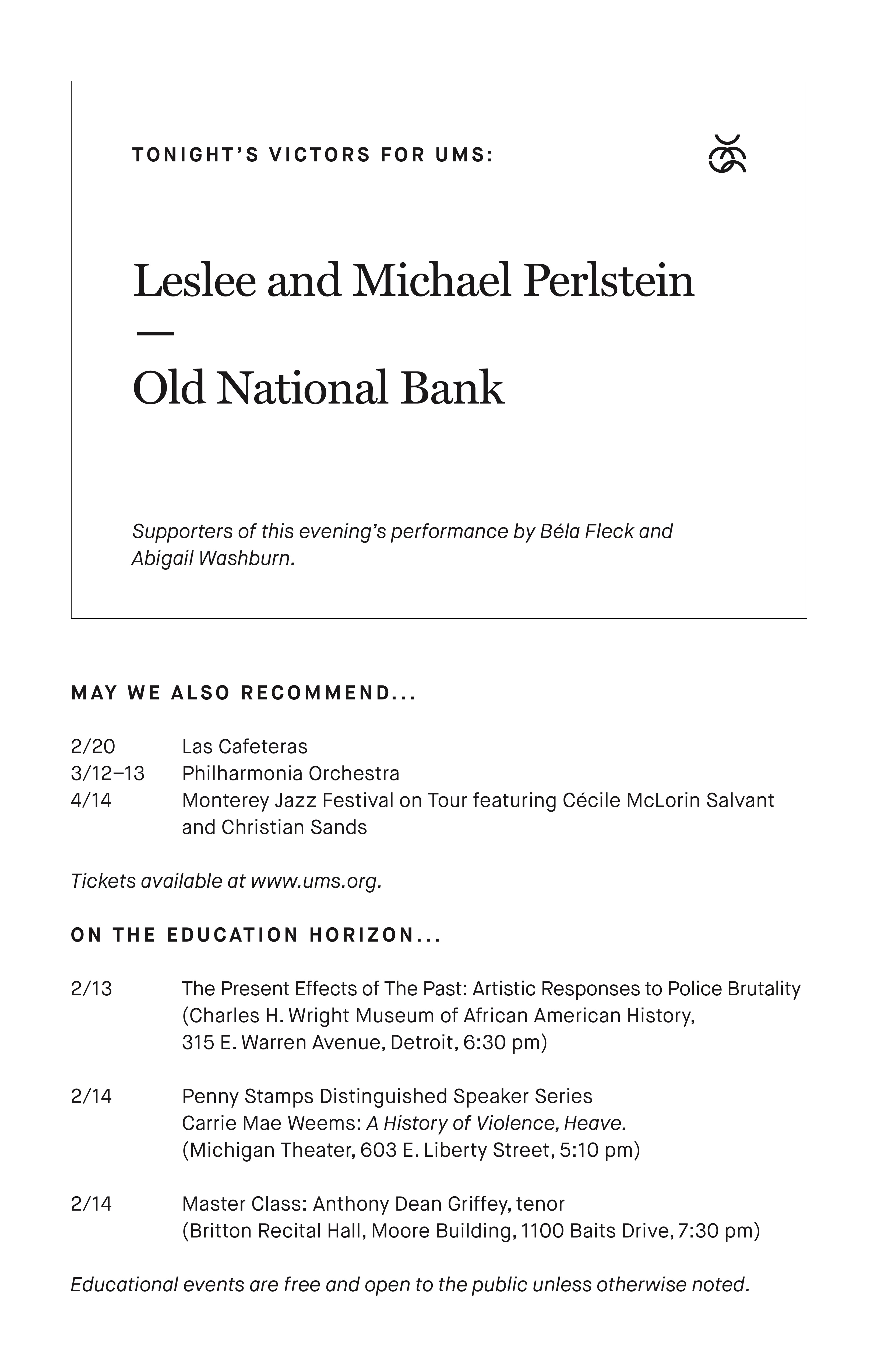 5
Old National proudly supports UMS.
Strengthening
the fabric of
our community.
As much as we are a  nancial institution, Old National is a group of parents, volunteers, artists, athletes, neighbors and friends. By making investments of our time, talent and treasure, we work with you to strengthen the fabric of our community.
Member FDIC | oldnational.com
Ann Arbor
2723 S State St Ste 110 734-887-2600 | 355 S Zeeb Rd 734-887-0600
UMS ARCHIVES
This evening’s performance marks Béla Fleck’s third performance under UMS auspices, following his UMS debut in February 2010 in Hill Auditorium with Bassekou Kouyaté and Ngoni Ba. He most recently appeared under UMS auspices in November 2013 in Rackham Auditorium with Brooklyn Rider. UMS welcomes Abigail Washburn as she makes her UMS debut tonight.
ARTISTS
Béla Fleck and Abigail Washburn, “the
king and queen of the banjo” (Paste Magazine), have a musical partnership
like no other. Béla Fleck is a 15-time Grammy Award-winner who has taken the instrument across multiple genres, and Abigail Washburn a singer-songwriter
and clawhammer banjo player who re- radicalized it by combining it with Far East culture and sounds. The two met at a square dance, began collaborating musically,
and eventually fell in love. Over the years, they played together, most visibly in the Sparrow Quartet alongside Ben Sollee and Casey Driessen, and informally at a pickin’ party here, a bene t there, or occasionally popping up in each other’s solo shows. Fans of tradition-tweaking acoustic fare eagerly anticipated that they would begin making music together as a duo.
Mr. Fleck has the virtuosic, jazz- to-classical ingenuity of an iconic instrumentalist and composer with bluegrass roots. His collaborations range from his ground breaking standard-setting ensemble Béla Fleck and the Flecktones, to a staggeringly broad array of musical experiments. From writing concertos for full symphony orchestra, exploring the banjo’s African roots, to jazz duos with Chick Corea, many tout that Mr. Fleck
is the world’s premier banjo player. Ms. Washburn has the earthy sophistication of a postmodern, old-time singer-songwriter who has drawn critical acclaim for her solo albums. She has done fascinating work in folk musical diplomacy in China, presented an original theatrical production, and has contributed to singular side groups Uncle Earl and The Wu-Force. In addition to being named a TED Fellow in 2012, Ms. Washburn was recently named the  rst US-China Fellow at Vanderbilt University, in addition
to Carolina Performing Arts/Andrew W. Mellon Foundation’s DisTil Fellow for 2018–2020.
On stage tonight, Mr. Fleck and Ms. Washburn perform pieces from their Grammy-winning self-titled debut as well as their new record, Echo in the Valley (Rounder 2017). With one eye on using
the banjo to showcase America’s rich heritage and the other pulling the noble instrument from its most familiar arena
into new and unique realms, Mr. Fleck and Ms. Washburn meet in the mean, head-
on, to present music that feels wildly innovative and familiar at the same time. Their creative process on Echo in the Valley is sonically made manifest in the record’s major themes of harmony, empathy, and surrender. As Ms. Washburn explains,
the intense, intimate collaboration that they put forward on this project required
“a spirit of staying strong, but also a willingness to release into the other’s ideas to create something new,” possibly something bigger and more beautiful than one could do on one’s own. Whether at home, on stage, or on record, their deep bond, combined with the way their distinct musical personalities and banjo styles interact, makes theirs a picking partnership unlike any other on the planet.
7
TONIGHT’S VICTORS FOR UMS:
Leslee and Michael Perlstein
—
Old National Bank
Supporters of this evening’s performance by Béla Fleck and Abigail Washburn.
MAY WE ALSO RECOMMEND...
2/20 Las Cafeteras
3/12–13 Philharmonia Orchestra
4/14 Monterey Jazz Festival on Tour featuring Cécile McLorin Salvant
and Christian Sands
Tickets available at www.ums.org.
ON THE EDUCATION HORIZON...
2/13 The Present Effects of The Past: Artistic Responses to Police Brutality (Charles H. Wright Museum of African American History,
315 E. Warren Avenue, Detroit, 6:30 pm)
2/14 Penny Stamps Distinguished Speaker Series Carrie Mae Weems: A History of Violence, Heave. (Michigan Theater, 603 E. Liberty Street, 5:10 pm)
2/14 Master Class: Anthony Dean Griffey, tenor
(Britton Recital Hall, Moore Building, 1100 Baits Drive, 7:30 pm)
Educational events are free and open to the public unless otherwise noted.