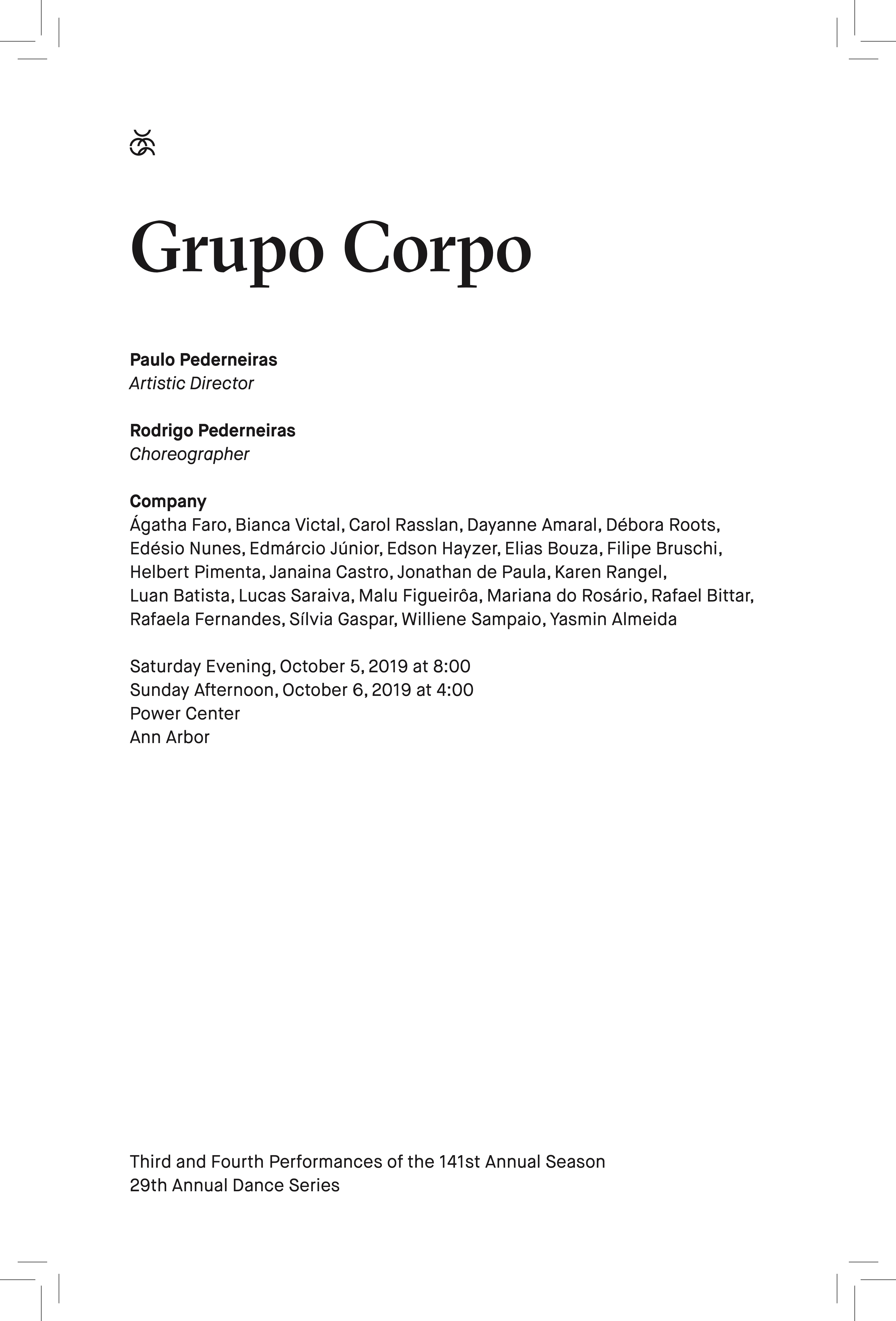 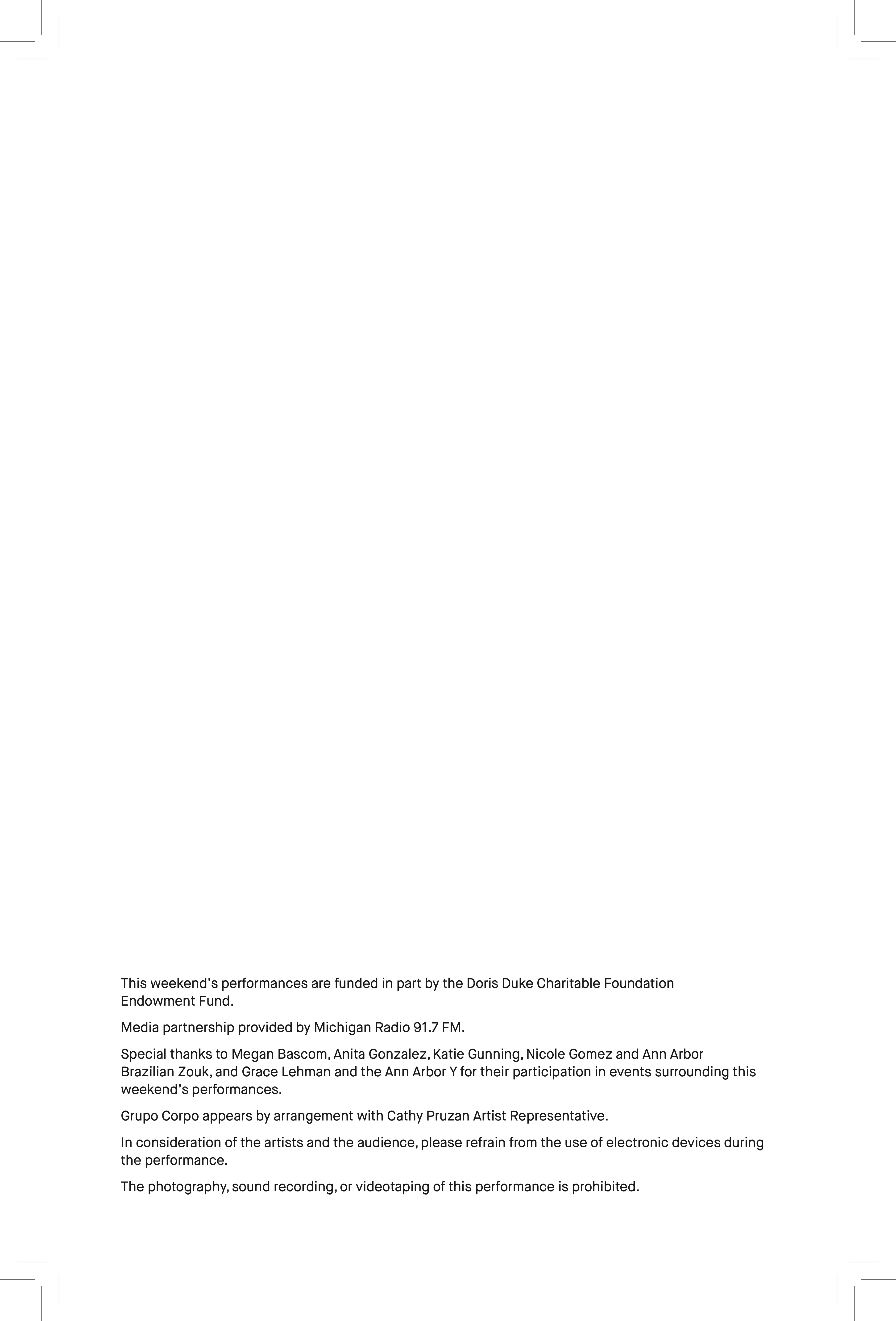 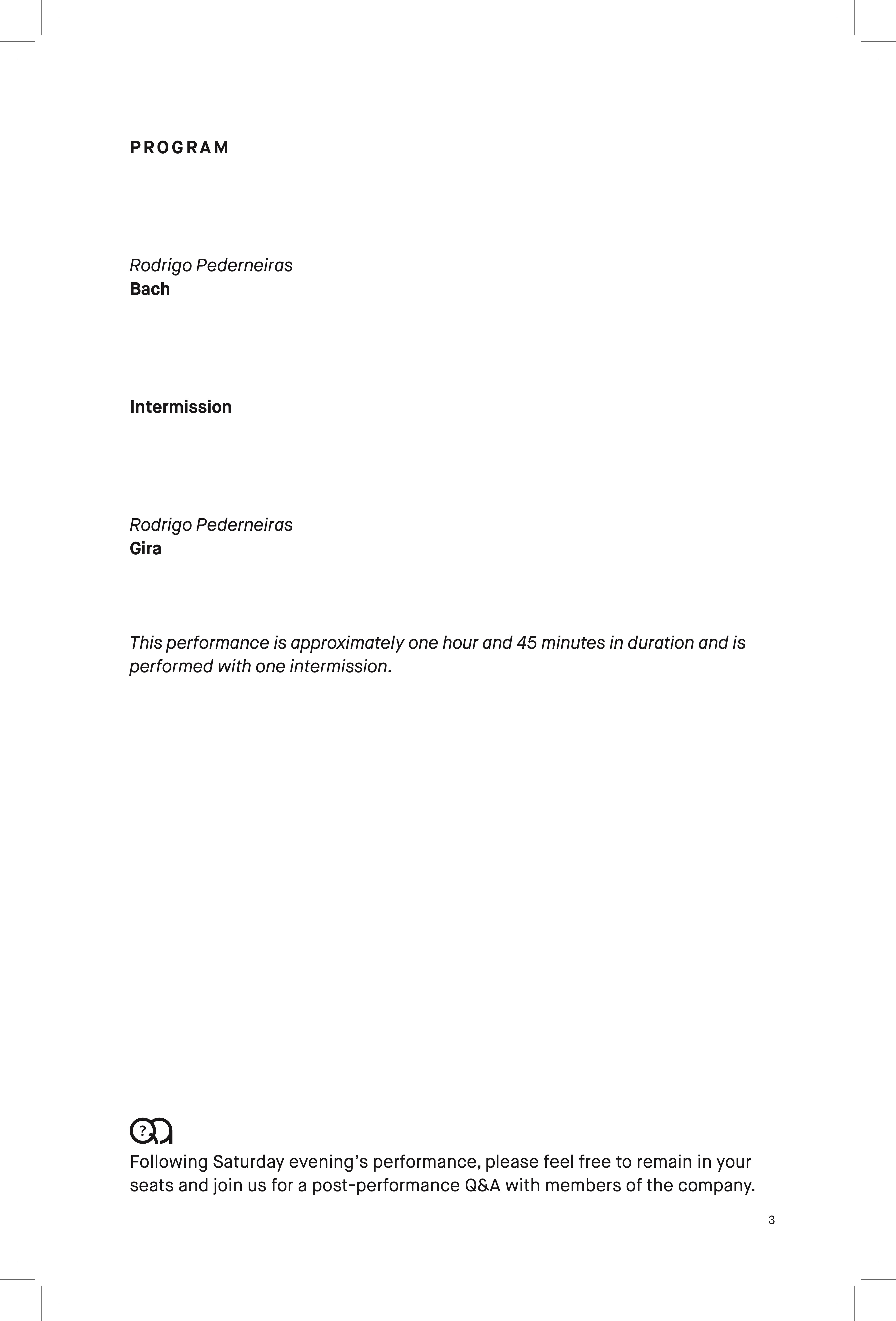 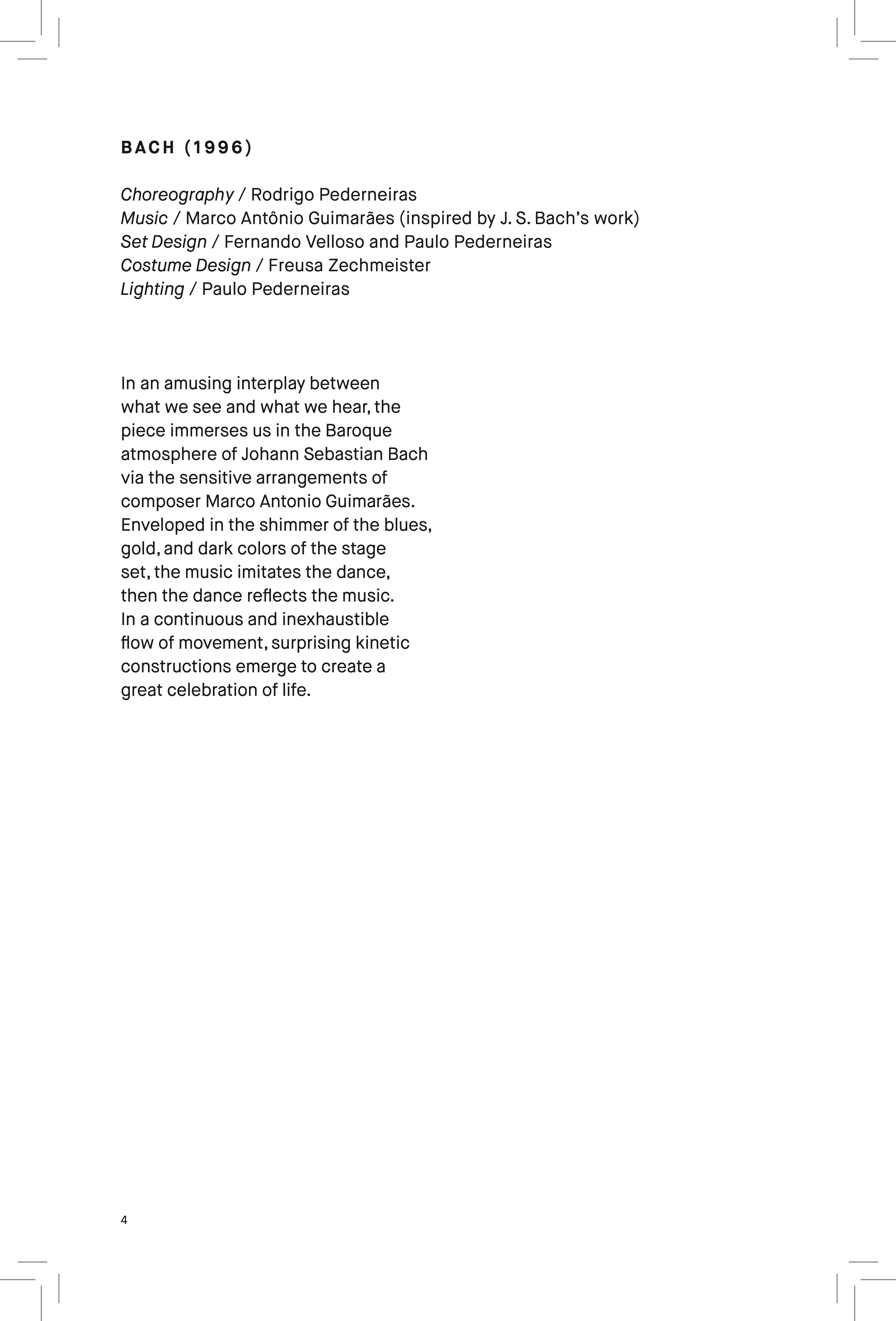 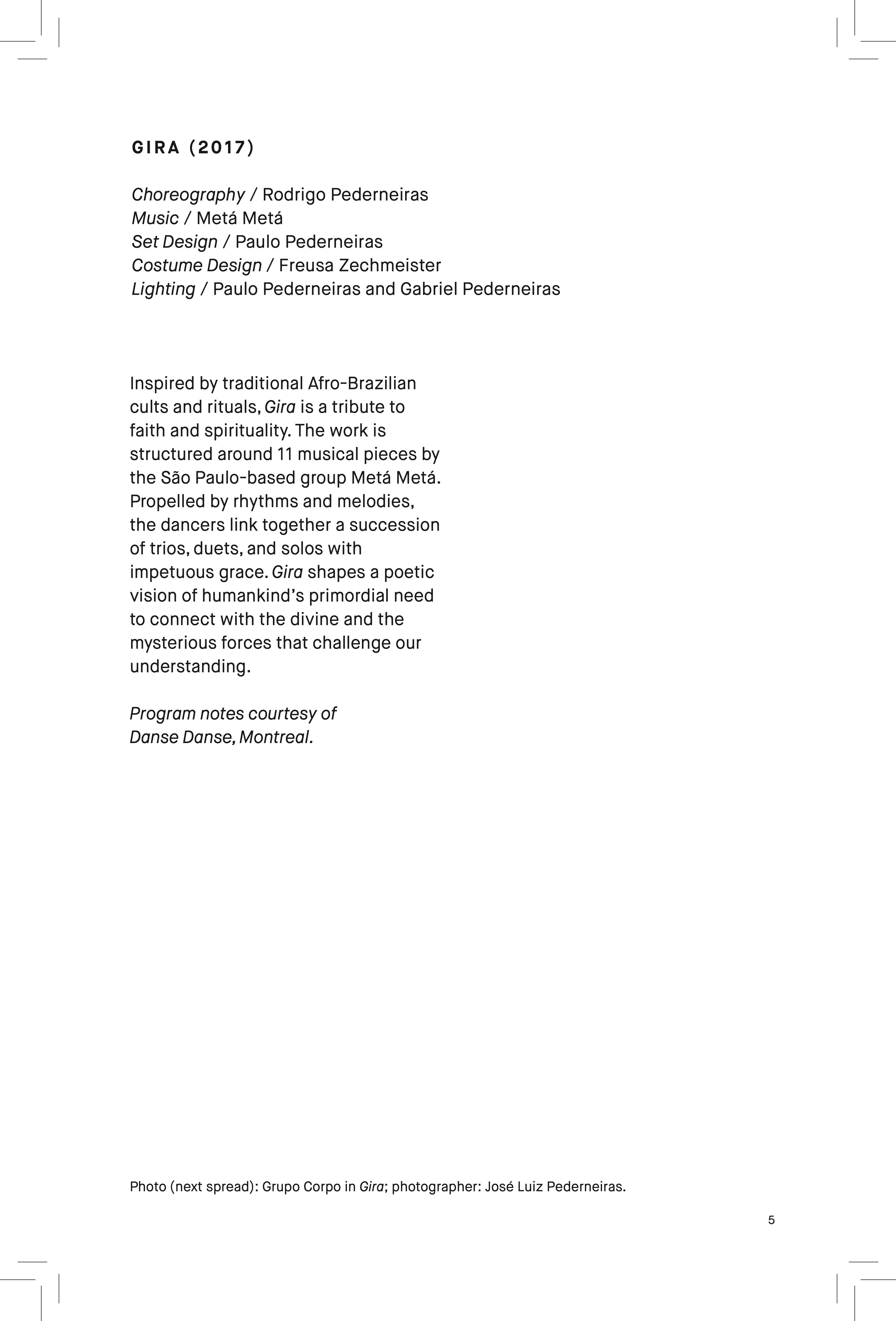 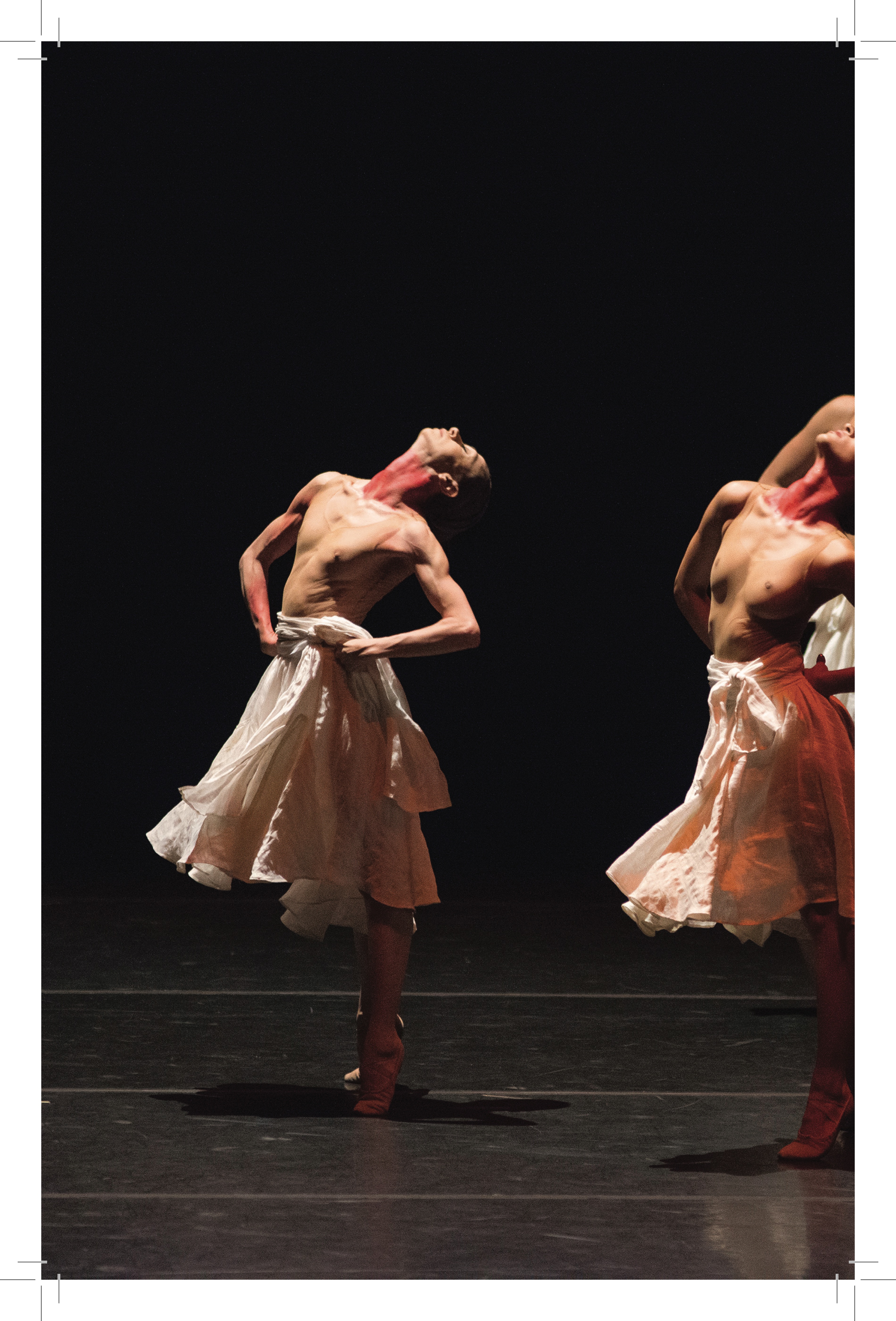 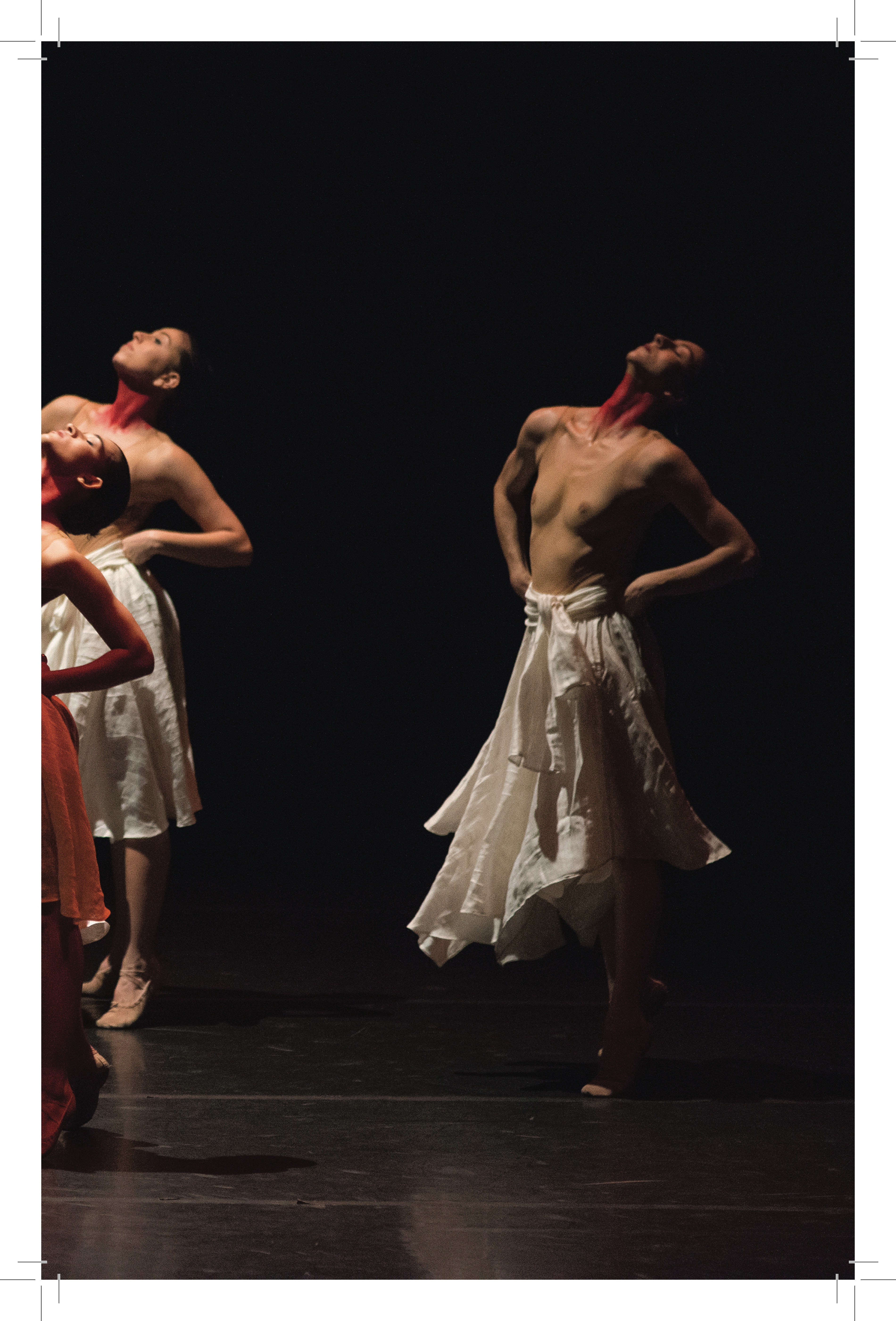 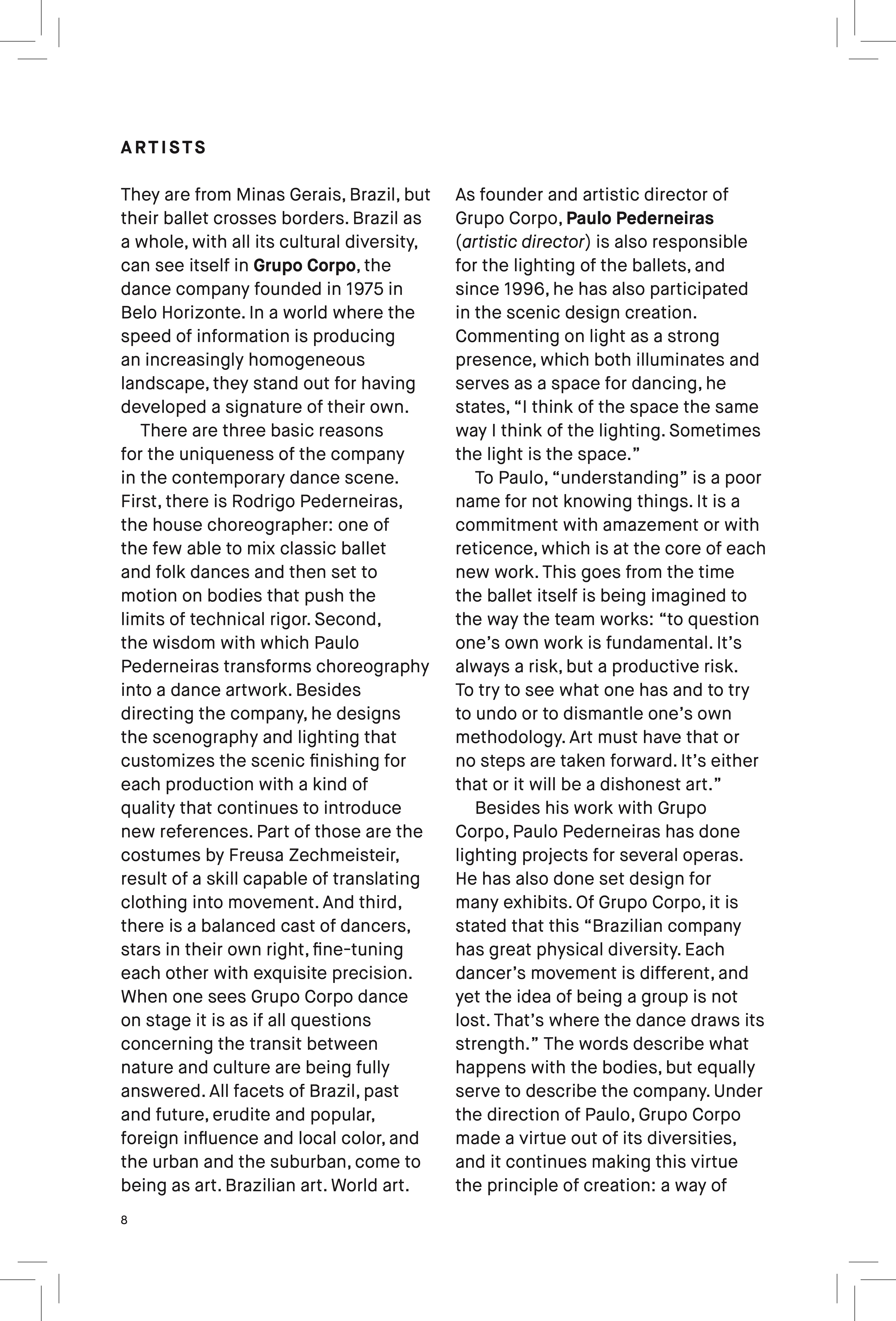 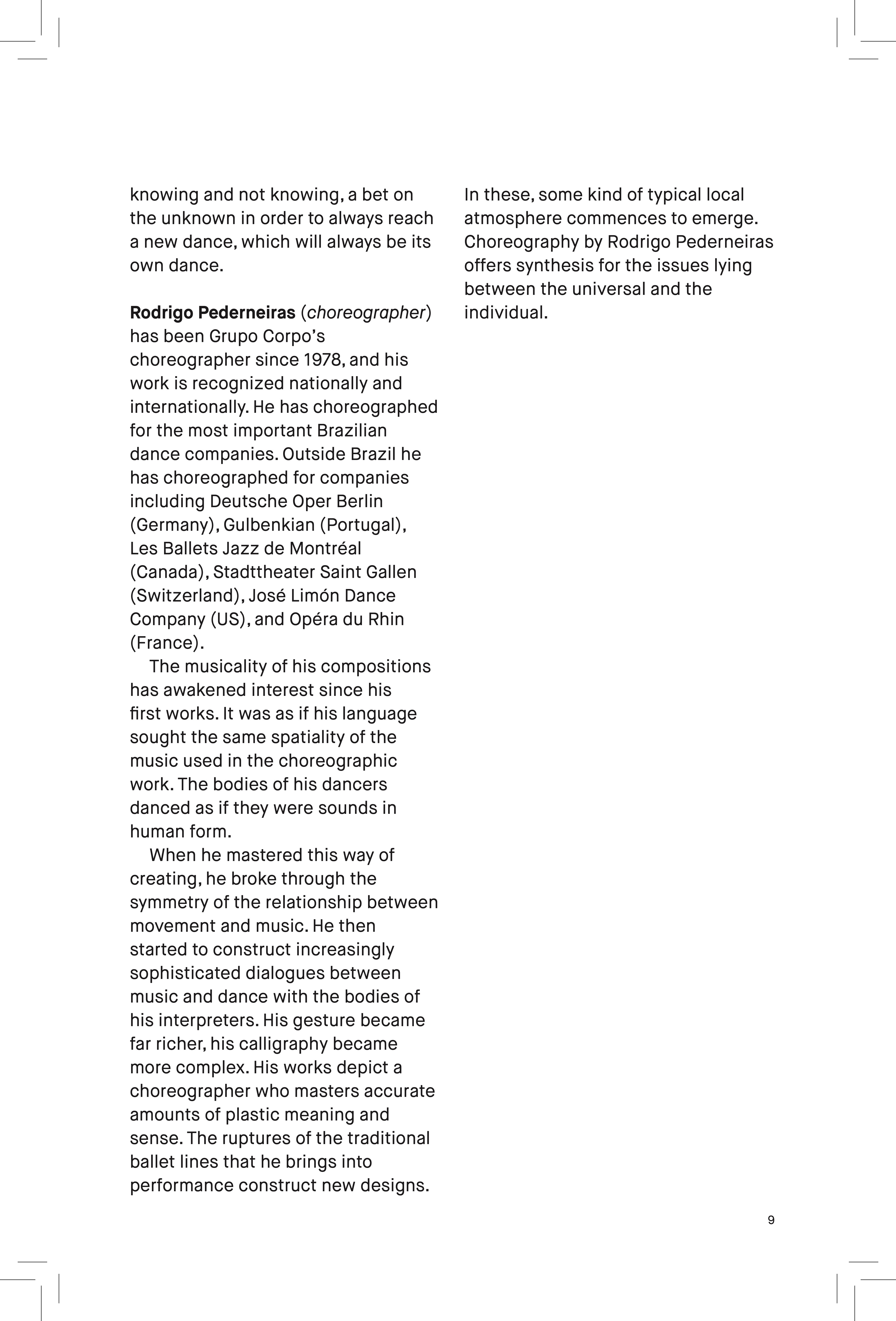 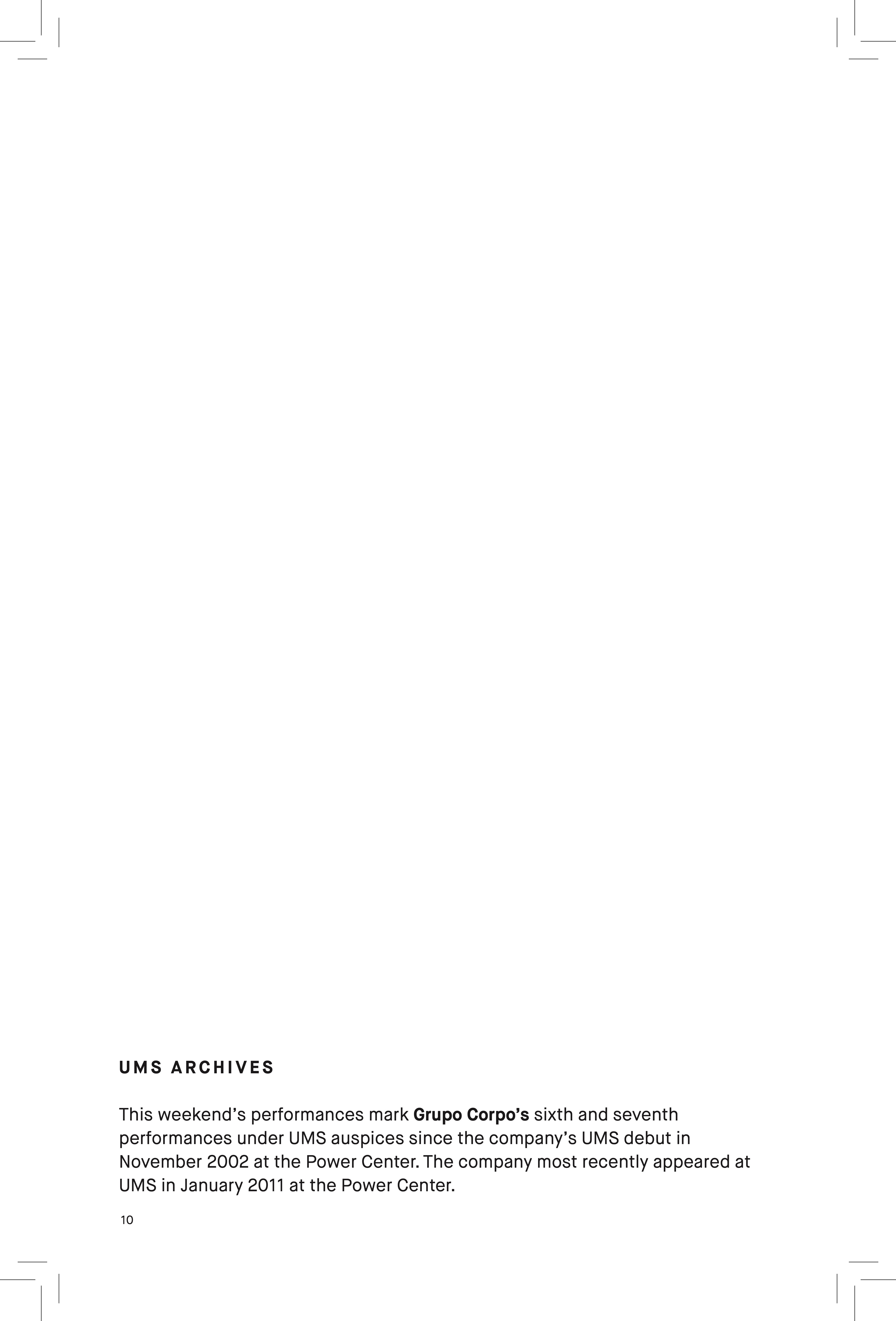 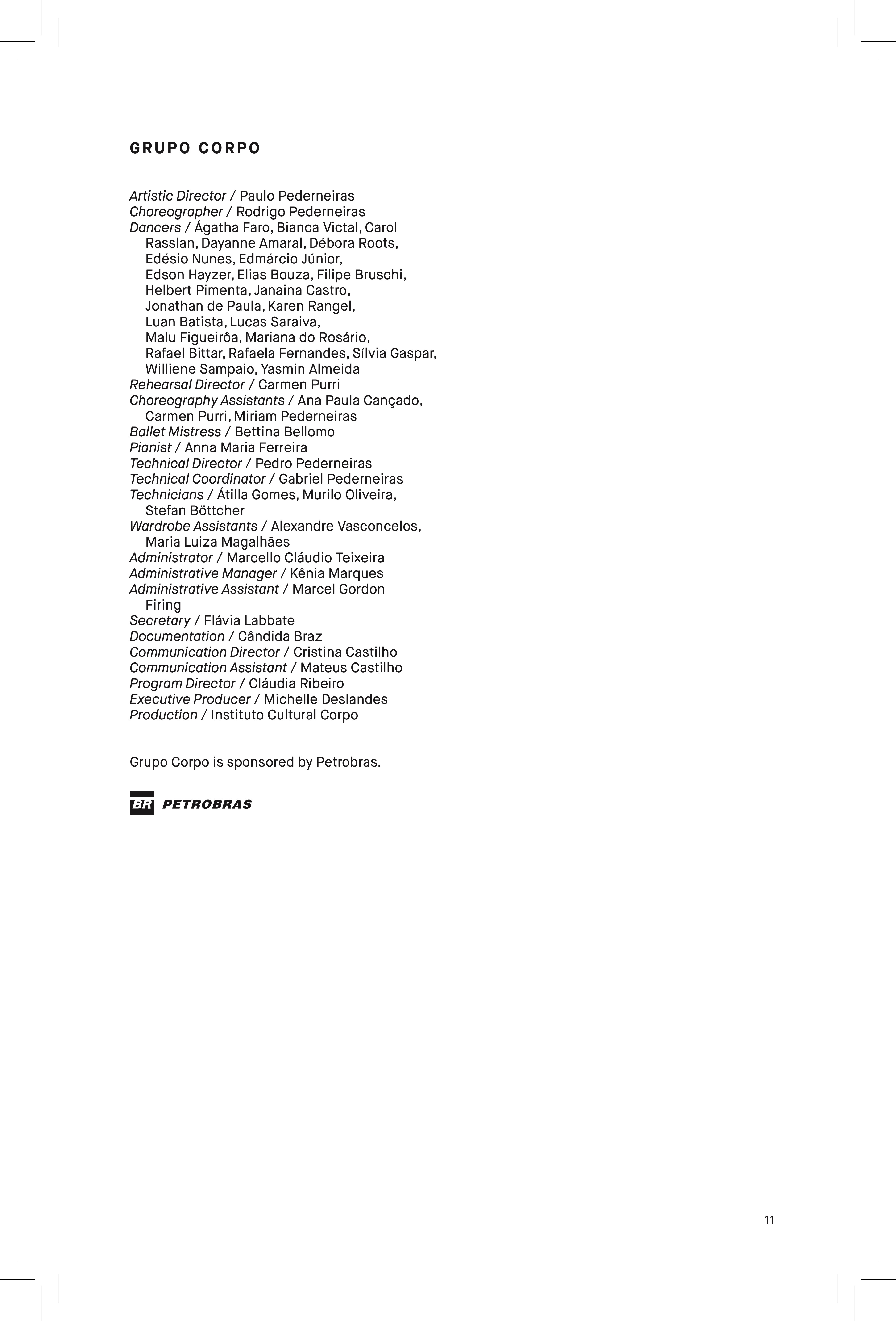 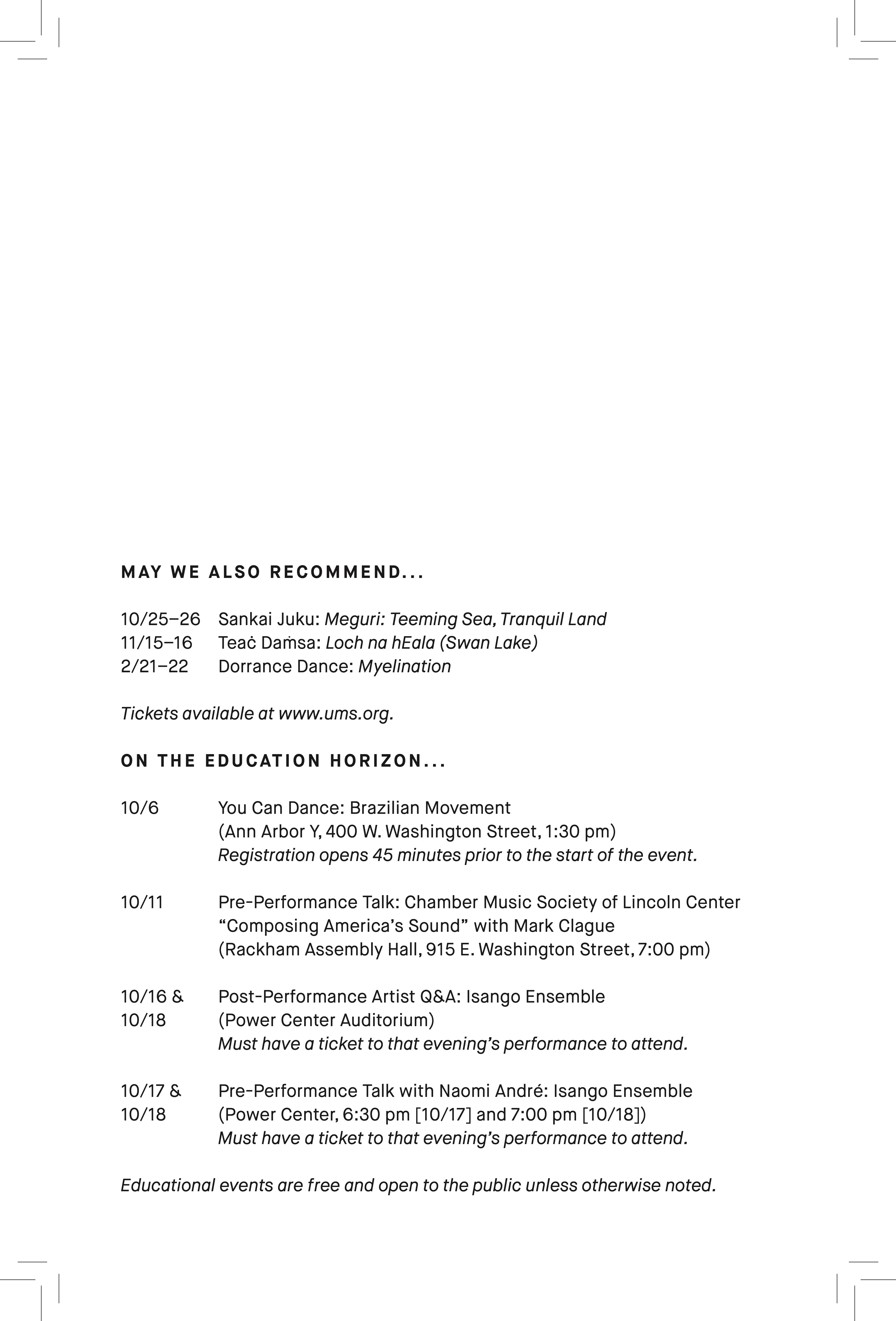 This weekend’s performances are funded in part by the Doris Duke Charitable Foundation Endowment Fund.

Special thanks to Megan Bascom, Anita Gonzalez, Katie Gunning, Nicole Gomez and Ann Arbor Brazilian Zouk, and Grace Lehman and the Ann Arbor Y for their participation in events surrounding this weekend’s performances.

This performance is approximately one hour and 45 minutes in duration and is performed with one intermission.

Following Saturday evening’s performance, please feel free to remain in your seats and join us for a post-performance Q&A with members of the company.

In an amusing interplay between
what we see and what we hear, the piece immerses us in the Baroque atmosphere of Johann Sebastian Bach via the sensitive arrangements of composer Marco Antonio Guimarães. Enveloped in the shimmer of the blues, gold, and dark colors of the stage

set, the music imitates the dance, then the dance reflects the music. In a continuous and inexhaustible flow of movement, surprising kinetic constructions emerge to create a great celebration of life.

Inspired by traditional Afro-Brazilian cults and rituals, Gira is a tribute to faith and spirituality. The work is structured around 11 musical pieces by the São Paulo-based group Metá Metá. Propelled by rhythms and melodies, the dancers link together a succession of trios, duets, and solos with impetuous grace. Gira shapes a poetic vision of humankind’s primordial need to connect with the divine and the mysterious forces that challenge our understanding.

They are from Minas Gerais, Brazil, but their ballet crosses borders. Brazil as a whole, with all its cultural diversity, can see itself in Grupo Corpo, the dance company founded in 1975 in Belo Horizonte. In a world where the speed of information is producing

an increasingly homogeneous landscape, they stand out for having developed a signature of their own.

There are three basic reasons
for the uniqueness of the company
in the contemporary dance scene. First, there is Rodrigo Pederneiras, the house choreographer: one of
the few able to mix classic ballet
and folk dances and then set to motion on bodies that push the
limits of technical rigor. Second,
the wisdom with which Paulo Pederneiras transforms choreography into a dance artwork. Besides directing the company, he designs the scenography and lighting that customizes the scenic finishing for each production with a kind of
quality that continues to introduce new references. Part of those are the costumes by Freusa Zechmeisteir, result of a skill capable of translating clothing into movement. And third, there is a balanced cast of dancers, stars in their own right, fine-tuning each other with exquisite precision. When one sees Grupo Corpo dance on stage it is as if all questions concerning the transit between nature and culture are being fully answered. All facets of Brazil, past and future, erudite and popular, foreign influence and local color, and the urban and the suburban, come to being as art. Brazilian art. World art.

As founder and artistic director of Grupo Corpo, Paulo Pederneiras (artistic director) is also responsible for the lighting of the ballets, and since 1996, he has also participated in the scenic design creation. Commenting on light as a strong presence, which both illuminates and serves as a space for dancing, he states, “I think of the space the same way I think of the lighting. Sometimes the light is the space.”

To Paulo, “understanding” is a poor name for not knowing things. It is a commitment with amazement or with reticence, which is at the core of each new work. This goes from the time the ballet itself is being imagined to the way the team works: “to question one’s own work is fundamental. It’s always a risk, but a productive risk.

To try to see what one has and to try to undo or to dismantle one’s own methodology. Art must have that or no steps are taken forward. It’s either that or it will be a dishonest art.”

Besides his work with Grupo
Corpo, Paulo Pederneiras has done lighting projects for several operas. He has also done set design for
many exhibits. Of Grupo Corpo, it is stated that this “Brazilian company has great physical diversity. Each dancer’s movement is different, and yet the idea of being a group is not lost. That’s where the dance draws its strength.” The words describe what happens with the bodies, but equally serve to describe the company. Under the direction of Paulo, Grupo Corpo made a virtue out of its diversities, and it continues making this virtue the principle of creation: a way of

knowing and not knowing, a bet on the unknown in order to always reach a new dance, which will always be its own dance.

Rodrigo Pederneiras (choreographer) has been Grupo Corpo’s choreographer since 1978, and his work is recognized nationally and internationally. He has choreographed for the most important Brazilian dance companies. Outside Brazil he has choreographed for companies including Deutsche Oper Berlin (Germany), Gulbenkian (Portugal), Les Ballets Jazz de Montréal (Canada), Stadttheater Saint Gallen (Switzerland), José Limón Dance Company (US), and Opéra du Rhin (France).

The musicality of his compositions has awakened interest since his
first works. It was as if his language sought the same spatiality of the music used in the choreographic work. The bodies of his dancers danced as if they were sounds in human form.

When he mastered this way of creating, he broke through the symmetry of the relationship between movement and music. He then started to construct increasingly sophisticated dialogues between music and dance with the bodies of his interpreters. His gesture became far richer, his calligraphy became more complex. His works depict a choreographer who masters accurate amounts of plastic meaning and sense. The ruptures of the traditional ballet lines that he brings into performance construct new designs.

In these, some kind of typical local atmosphere commences to emerge. Choreography by Rodrigo Pederneiras offers synthesis for the issues lying between the universal and the individual.

Grupo Corpo is sponsored by Petrobras.

You Can Dance: Brazilian Movement
(Ann Arbor Y, 400 W. Washington Street, 1:30 pm) Registration opens 45 minutes prior to the start of the event.

Post-Performance Artist Q&A: Isango Ensemble
(Power Center Auditorium)
Must have a ticket to that evening’s performance to attend.