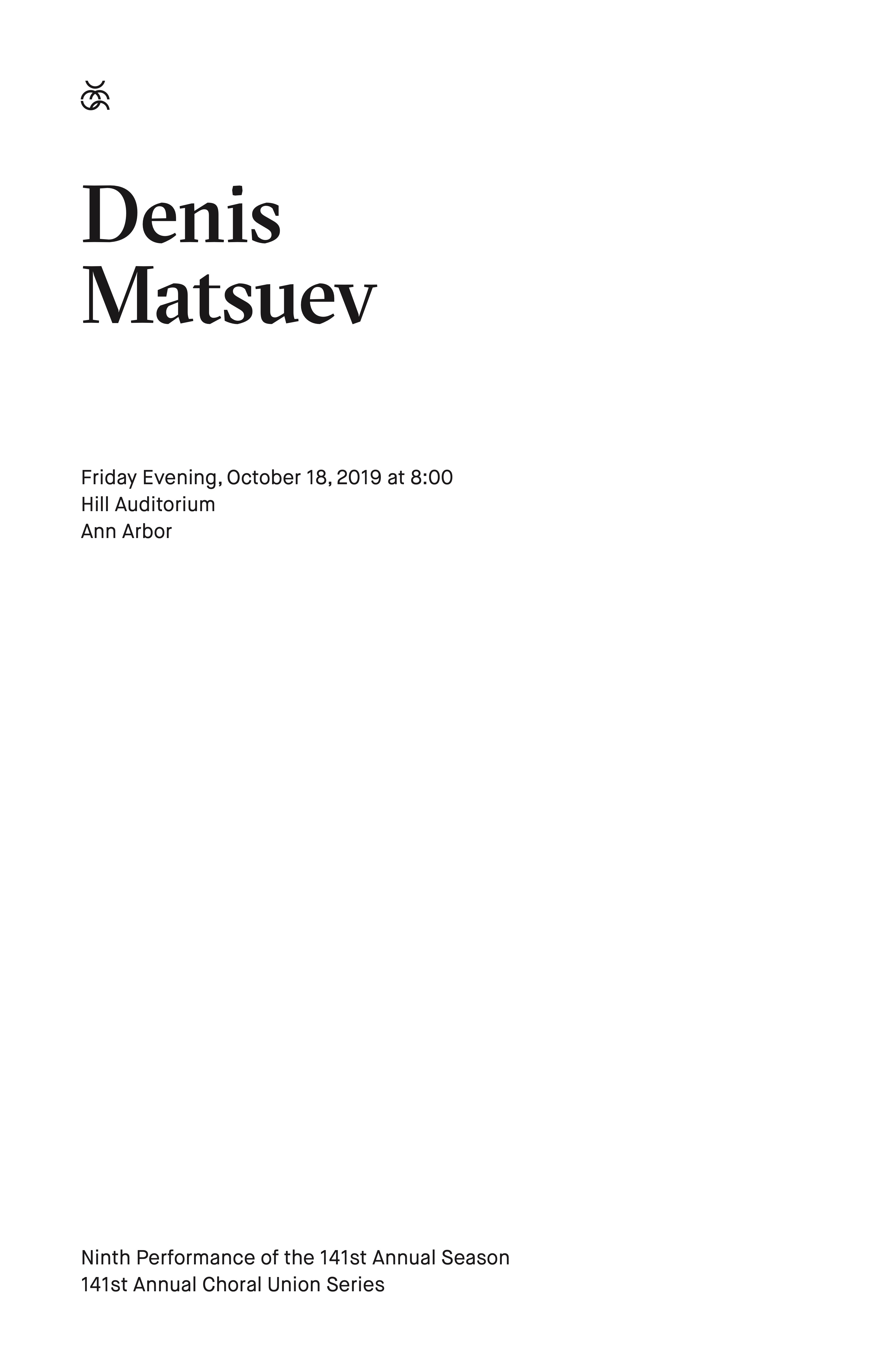 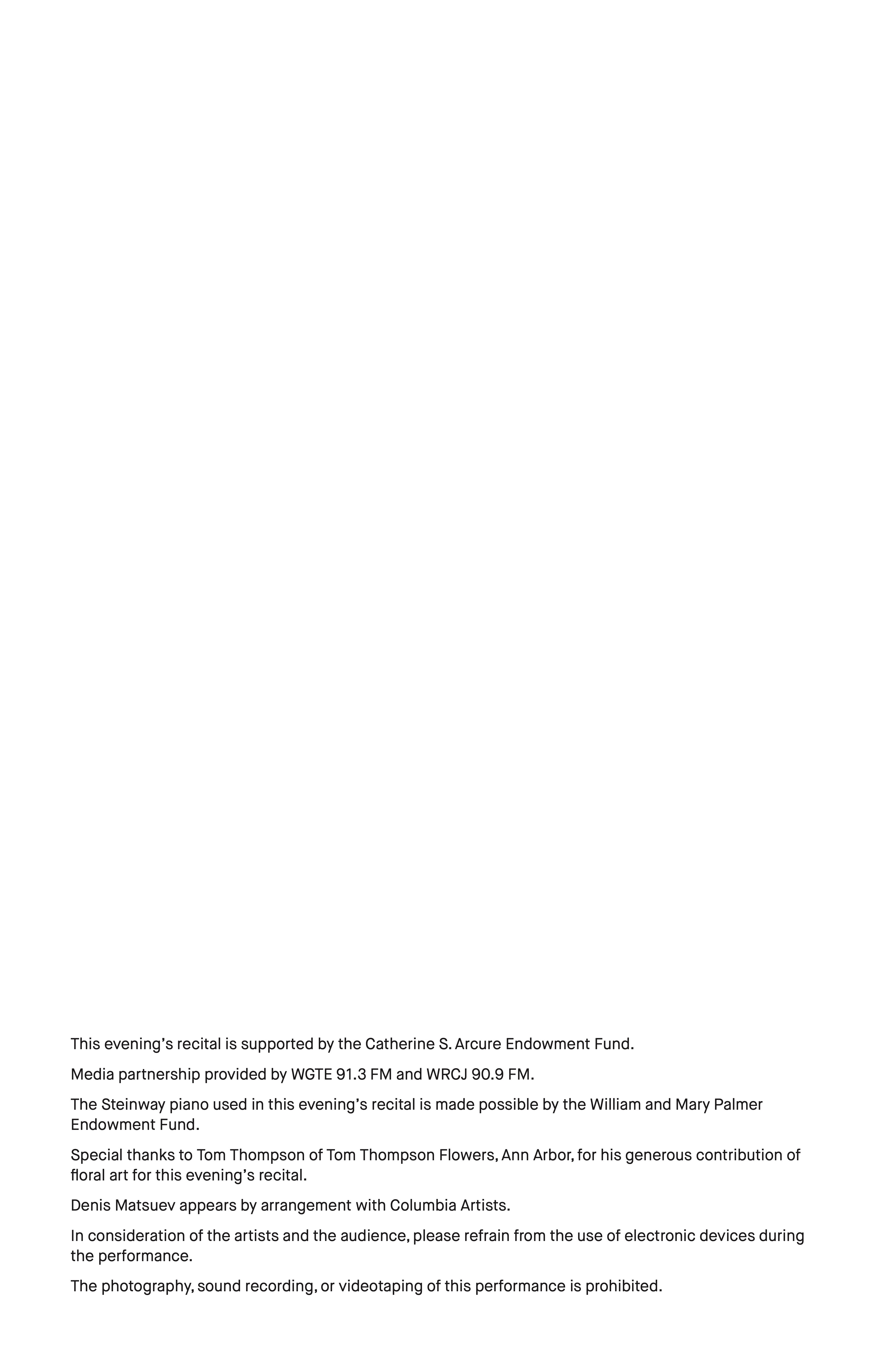 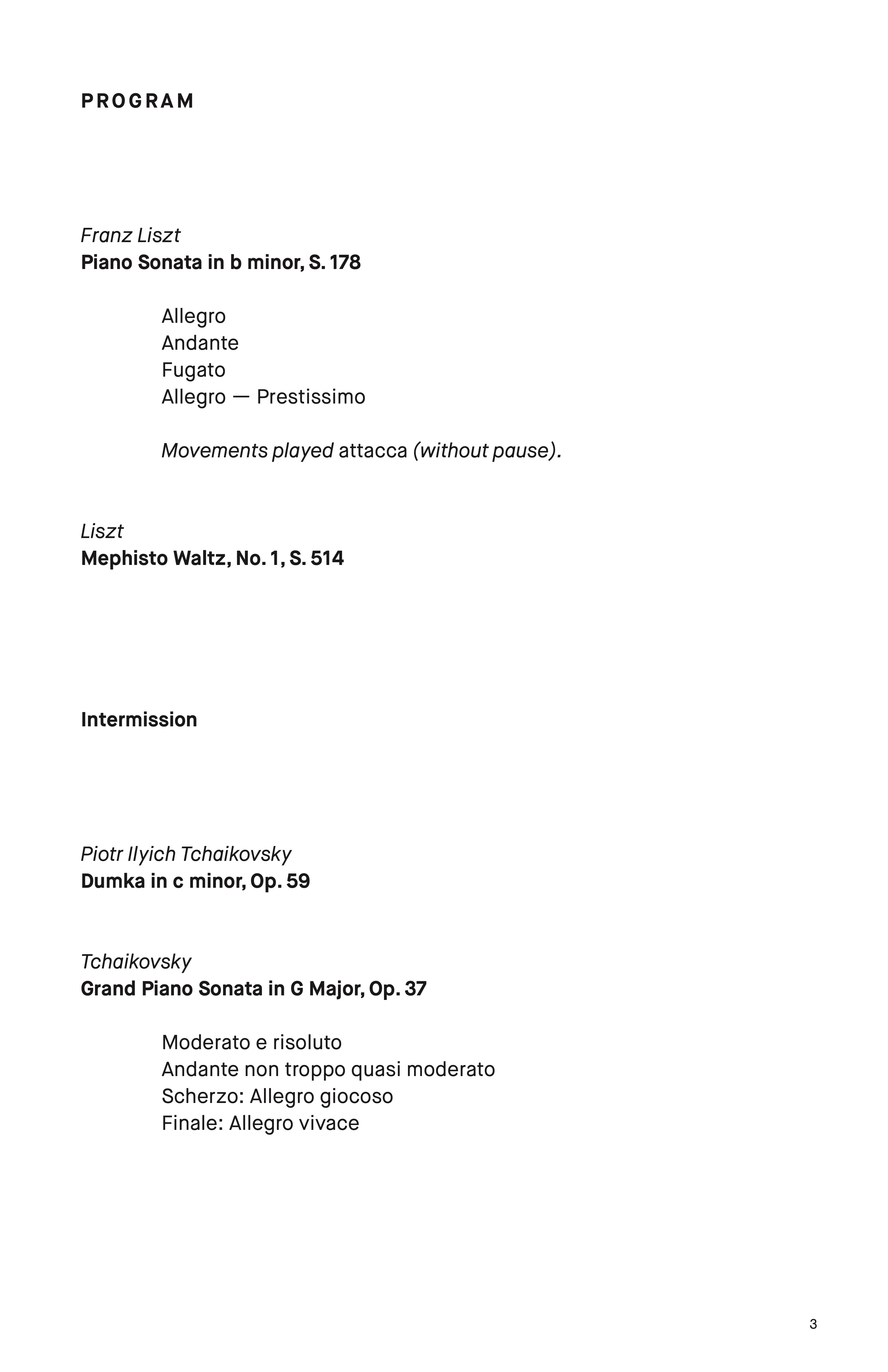 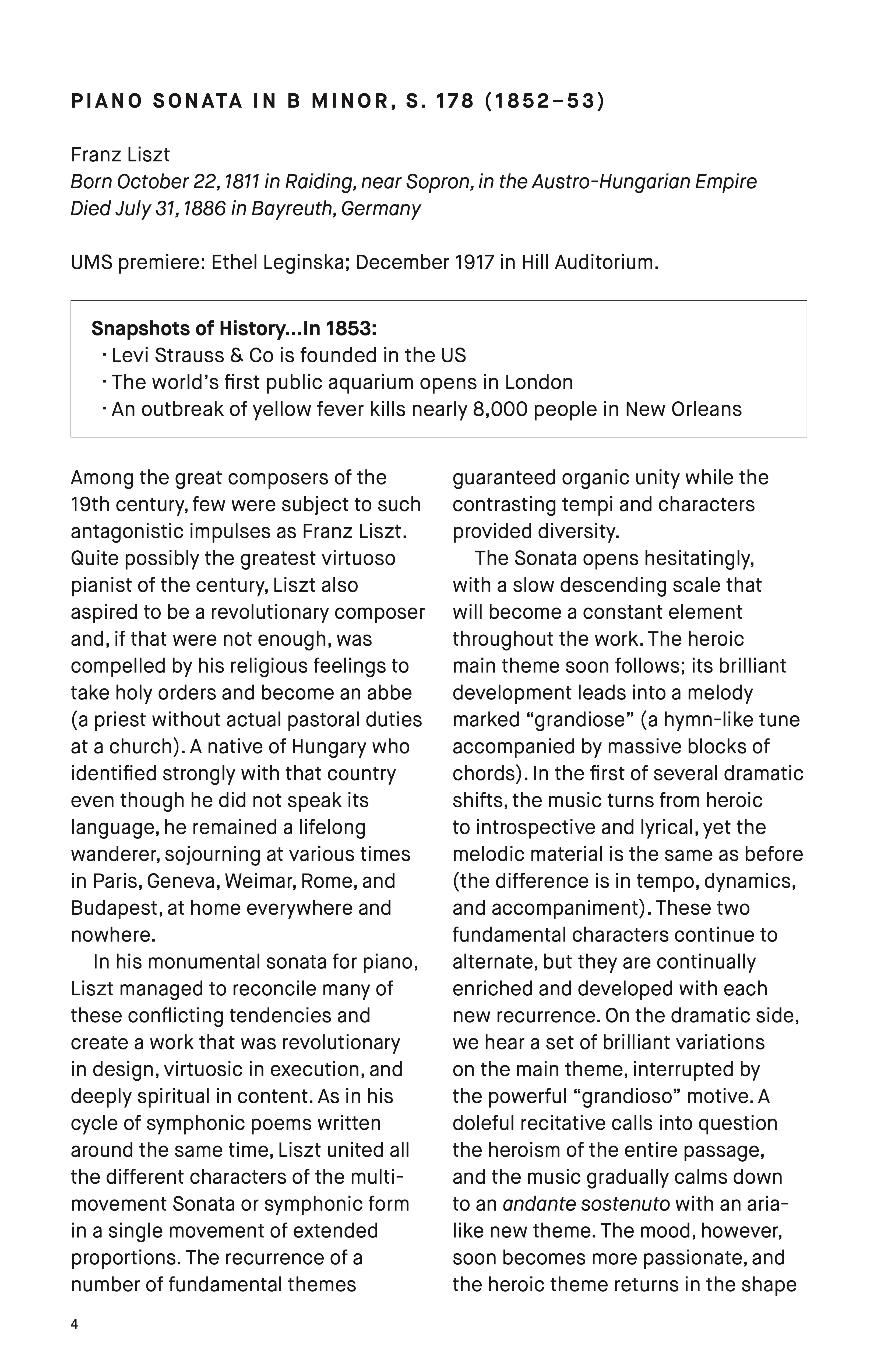 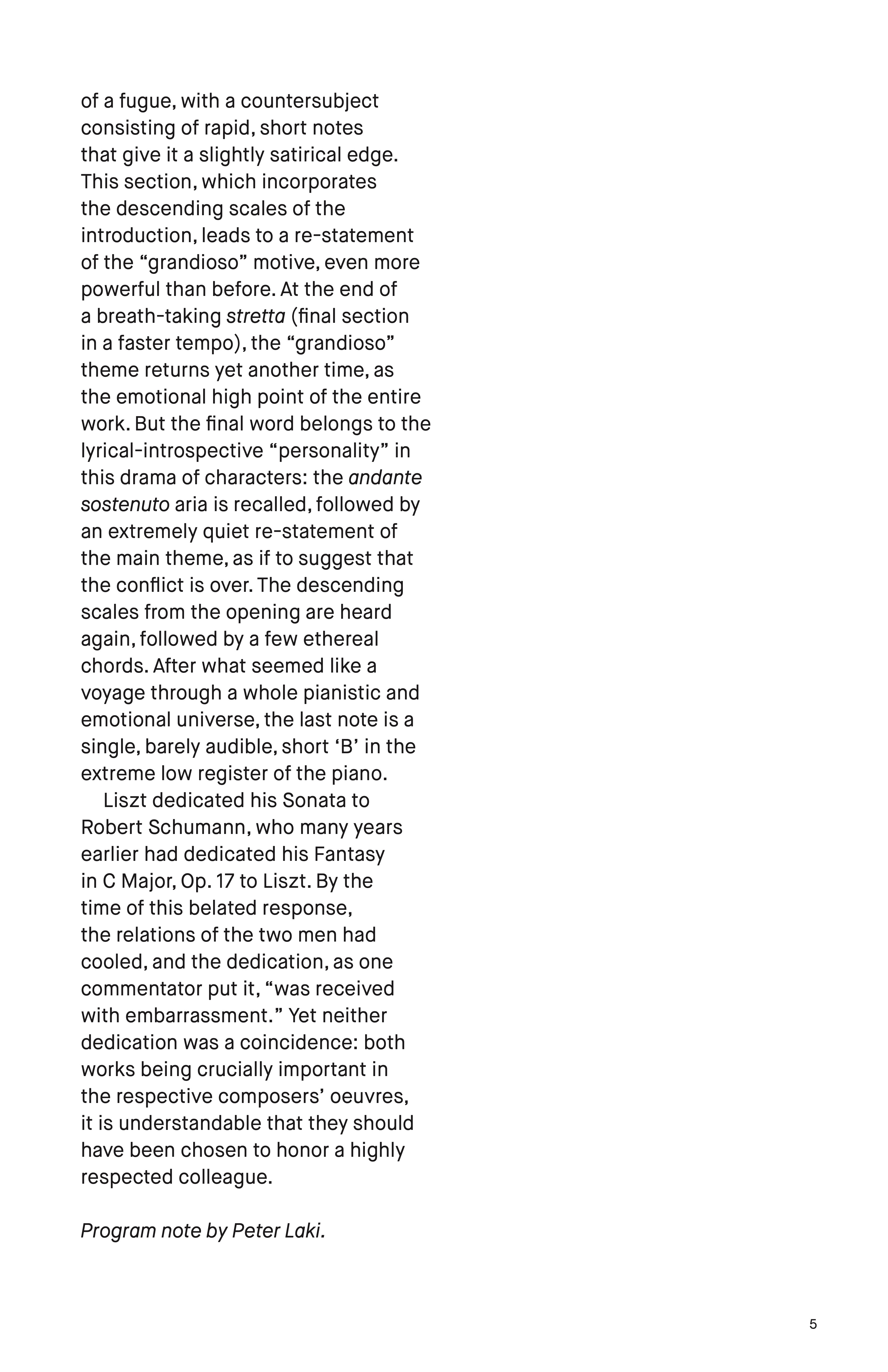 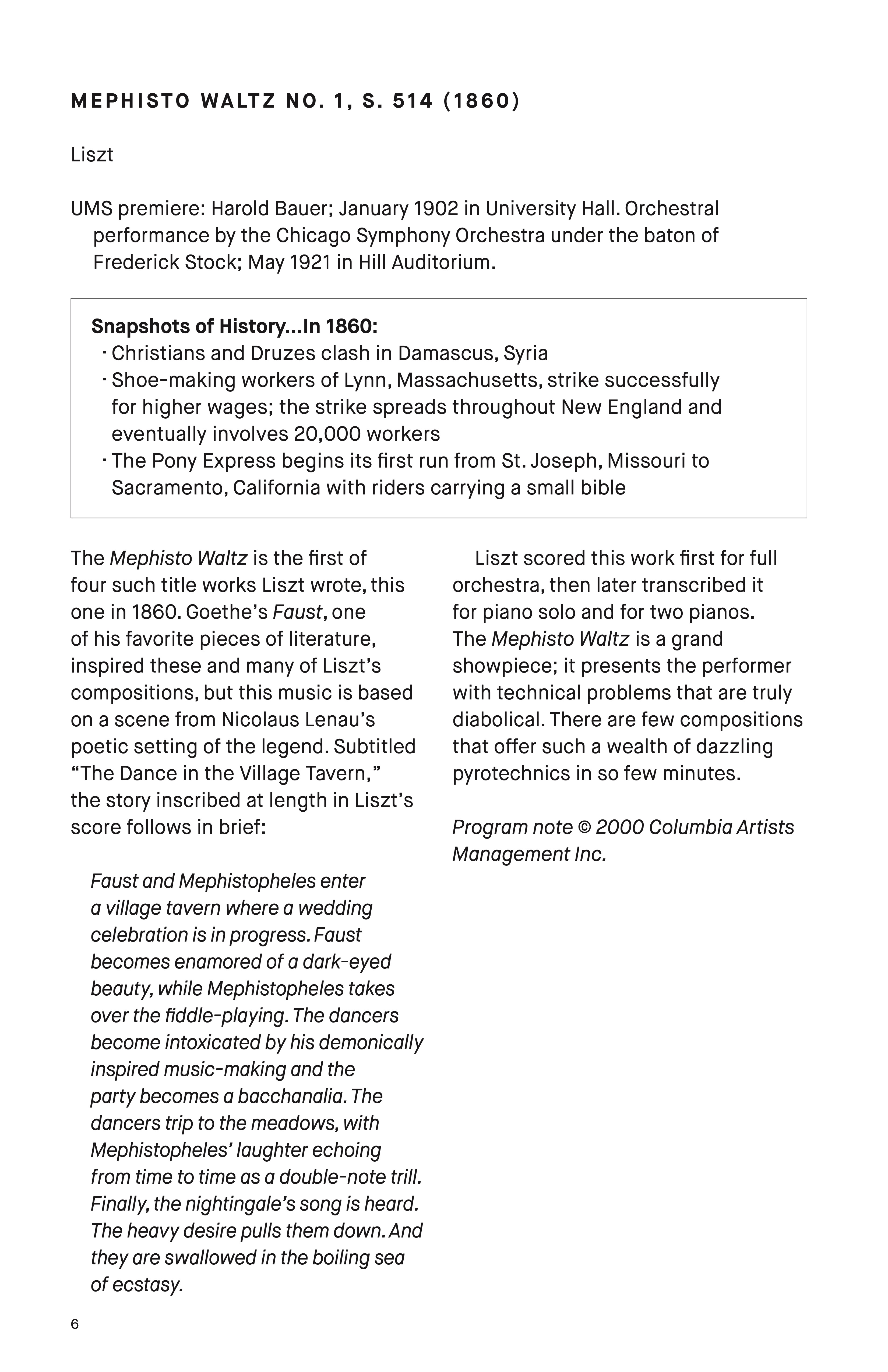 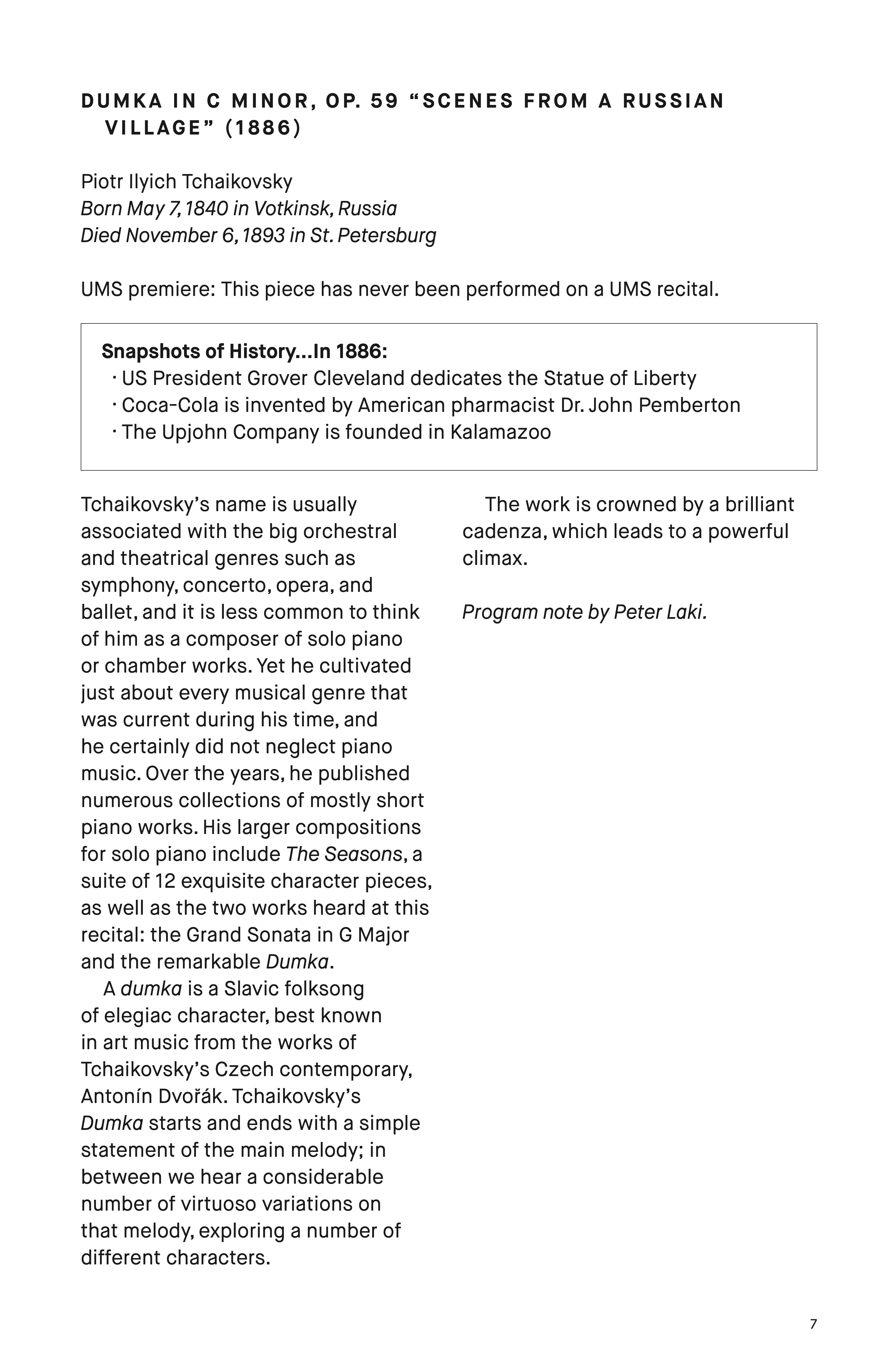 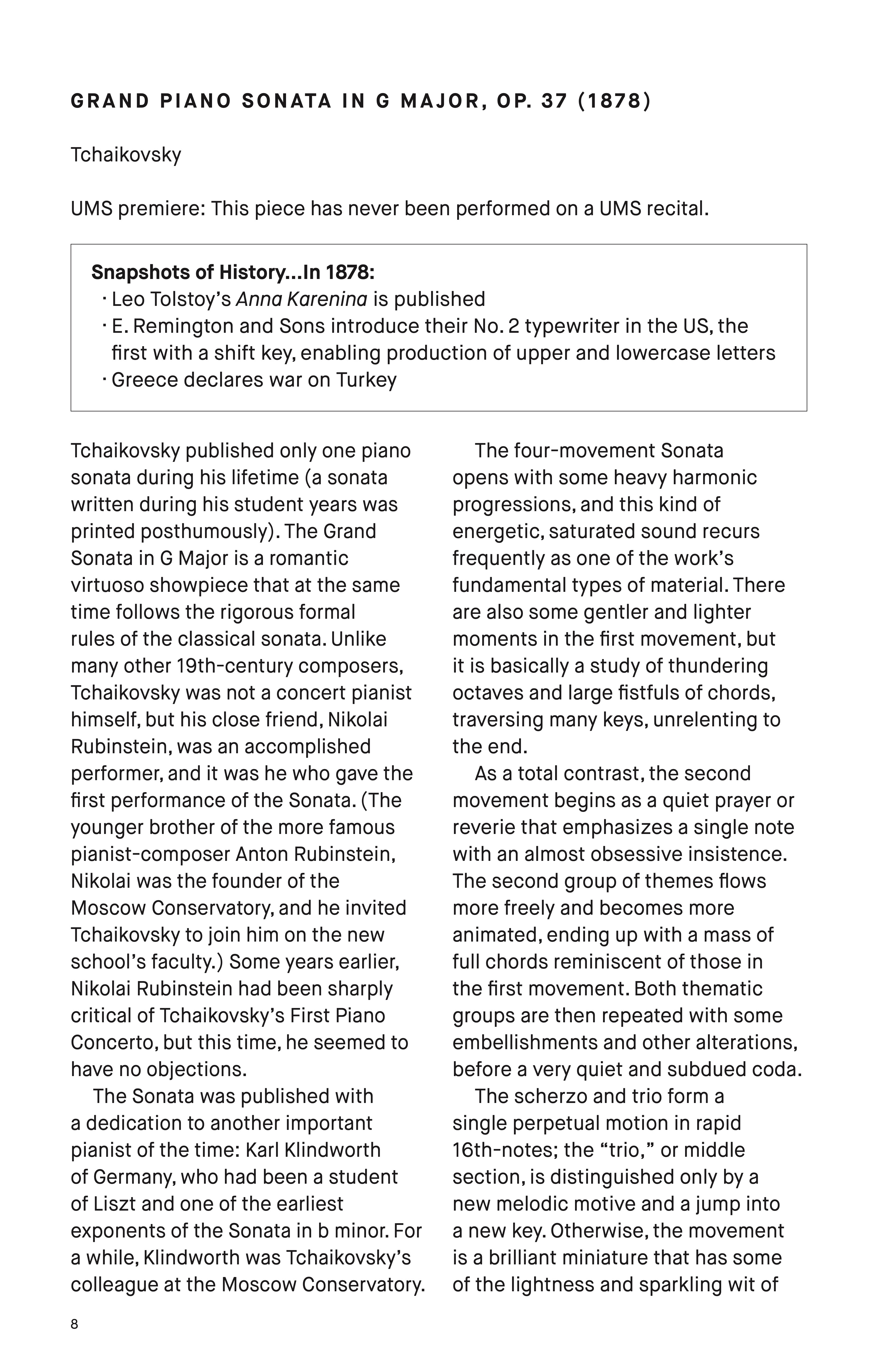 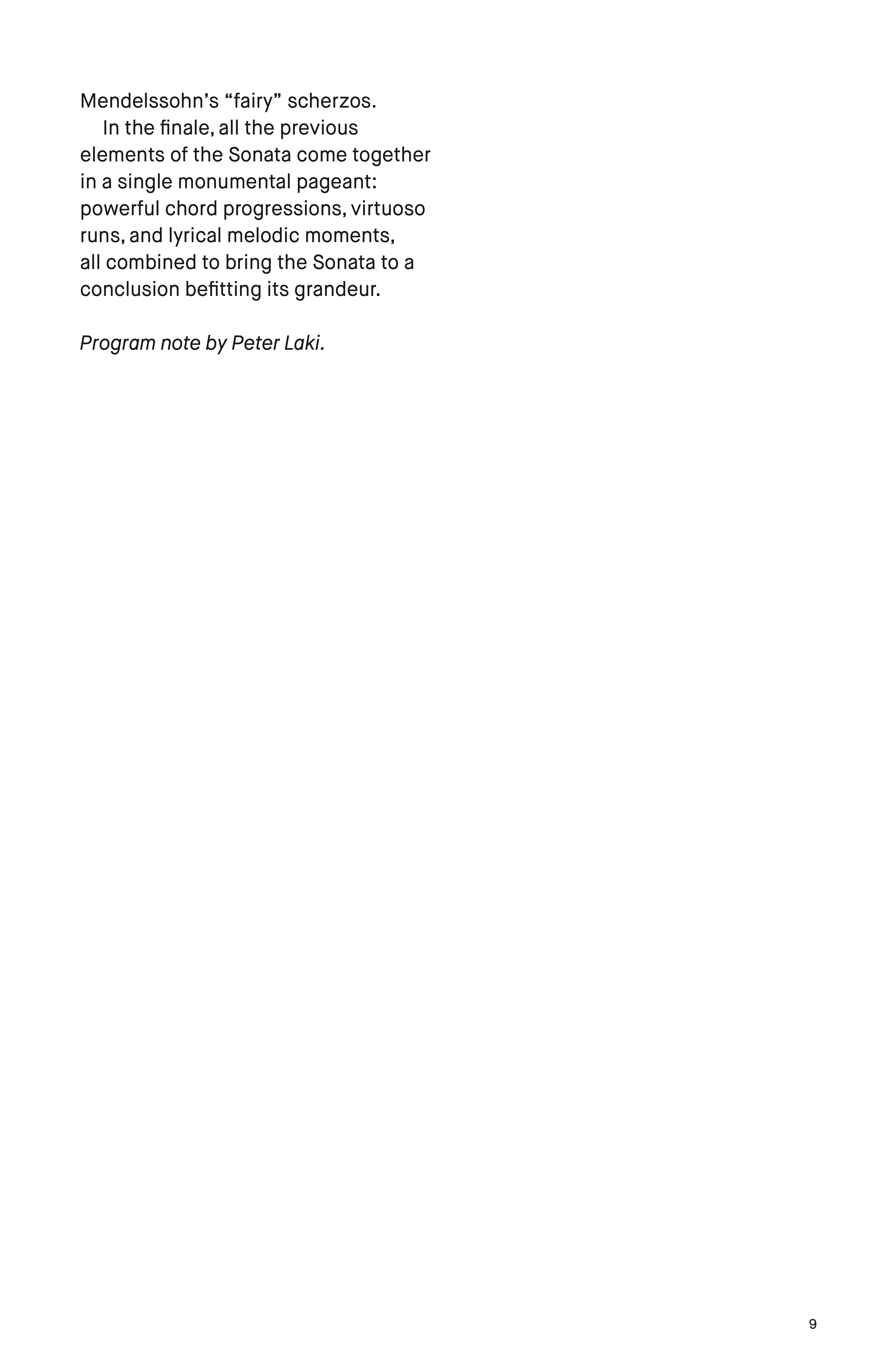 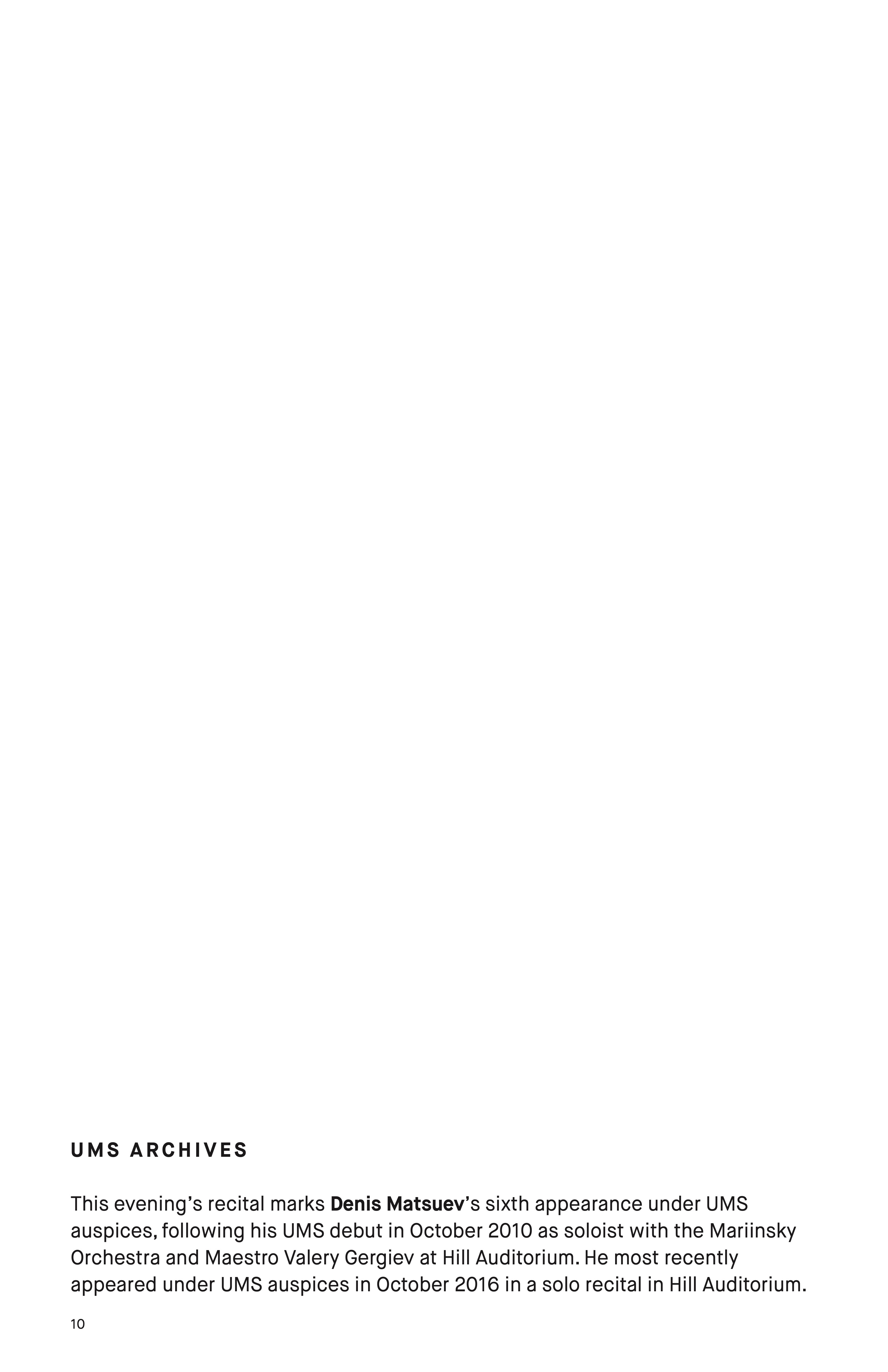 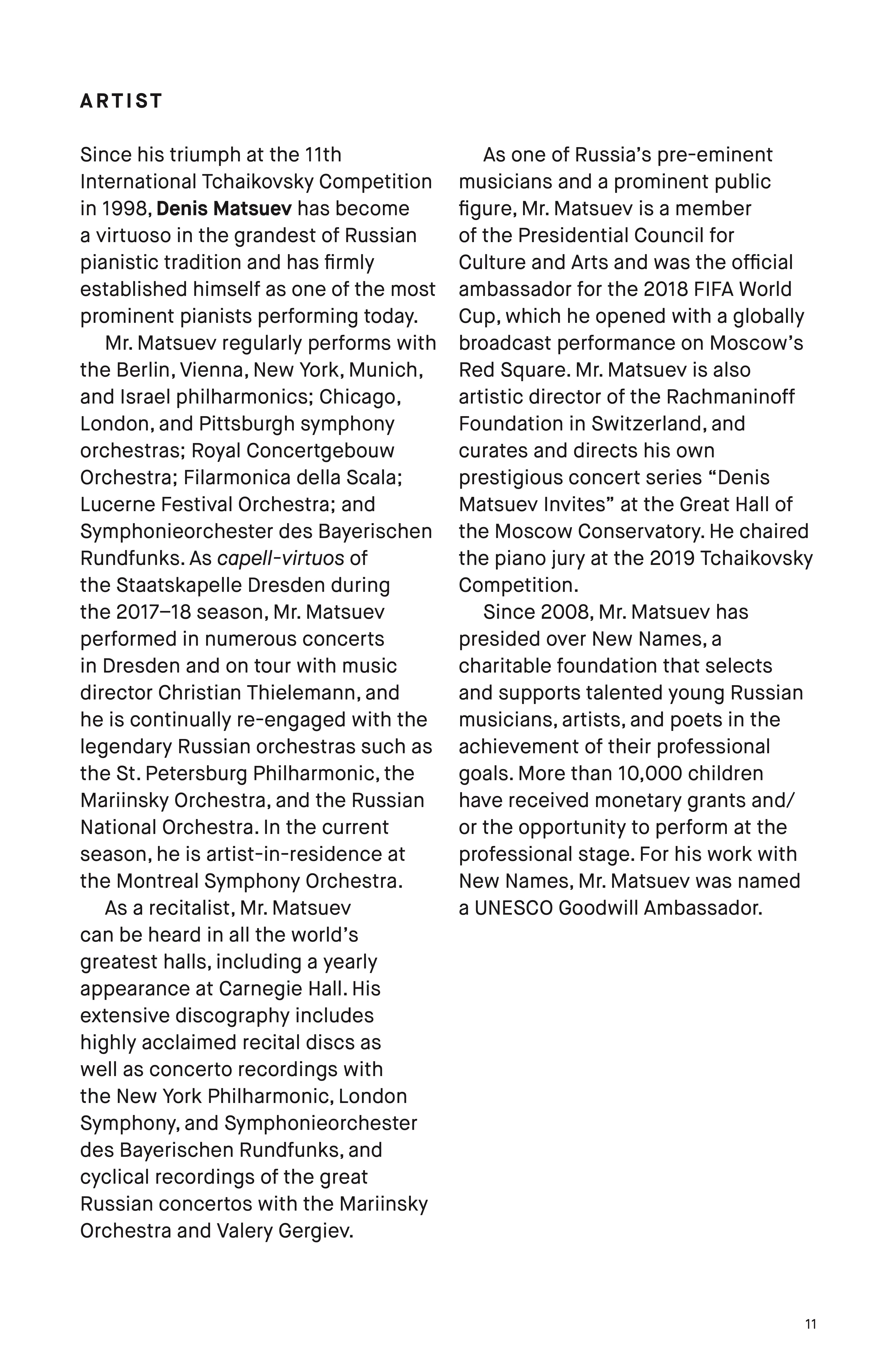 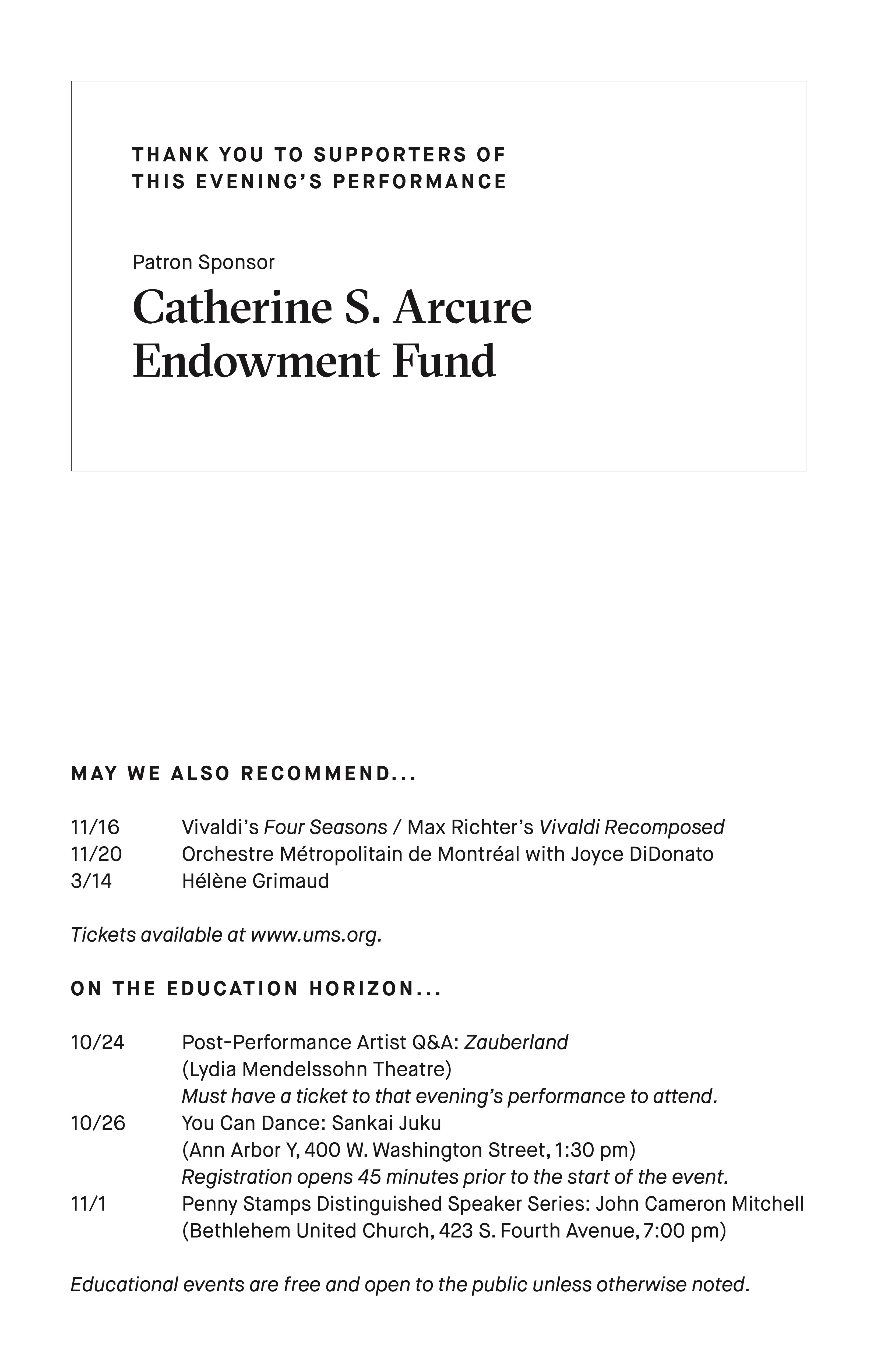 The Steinway piano used in this evening’s recital is made possible by the William and Mary Palmer Endowment Fund.

Special thanks to Tom Thompson of Tom Thompson Flowers, Ann Arbor, for his generous contribution of floral art for this evening’s recital.

· Levi Strauss & Co is founded in the US
· The world’s first public aquarium opens in London
· An outbreak of yellow fever kills nearly 8,000 people in New Orleans

Among the great composers of the 19th century, few were subject to such antagonistic impulses as Franz Liszt. Quite possibly the greatest virtuoso pianist of the century, Liszt also aspired to be a revolutionary composer and, if that were not enough, was compelled by his religious feelings to take holy orders and become an abbe (a priest without actual pastoral duties at a church). A native of Hungary who identified strongly with that country even though he did not speak its language, he remained a lifelong wanderer, sojourning at various times in Paris, Geneva, Weimar, Rome, and Budapest, at home everywhere and nowhere.

In his monumental sonata for piano, Liszt managed to reconcile many of these conflicting tendencies and create a work that was revolutionary in design, virtuosic in execution, and deeply spiritual in content. As in his cycle of symphonic poems written around the same time, Liszt united all the different characters of the multi- movement Sonata or symphonic form in a single movement of extended proportions. The recurrence of a number of fundamental themes

The Sonata opens hesitatingly,
with a slow descending scale that
will become a constant element throughout the work. The heroic
main theme soon follows; its brilliant development leads into a melody marked “grandiose” (a hymn-like tune accompanied by massive blocks of chords). In the first of several dramatic shifts, the music turns from heroic
to introspective and lyrical, yet the melodic material is the same as before (the difference is in tempo, dynamics, and accompaniment). These two fundamental characters continue to alternate, but they are continually enriched and developed with each new recurrence. On the dramatic side, we hear a set of brilliant variations
on the main theme, interrupted by
the powerful “grandioso” motive. A doleful recitative calls into question the heroism of the entire passage,
and the music gradually calms down to an andante sostenuto with an aria- like new theme. The mood, however, soon becomes more passionate, and the heroic theme returns in the shape

of a fugue, with a countersubject consisting of rapid, short notes
that give it a slightly satirical edge. This section, which incorporates
the descending scales of the introduction, leads to a re-statement of the “grandioso” motive, even more powerful than before. At the end of

a breath-taking stretta (final section in a faster tempo), the “grandioso” theme returns yet another time, as
the emotional high point of the entire work. But the final word belongs to the lyrical-introspective “personality” in this drama of characters: the andante sostenuto aria is recalled, followed by an extremely quiet re-statement of the main theme, as if to suggest that the conflict is over. The descending scales from the opening are heard again, followed by a few ethereal chords. After what seemed like a voyage through a whole pianistic and emotional universe, the last note is a single, barely audible, short ‘B’ in the extreme low register of the piano.

Liszt dedicated his Sonata to Robert Schumann, who many years earlier had dedicated his Fantasy
in C Major, Op. 17 to Liszt. By the time of this belated response,
the relations of the two men had cooled, and the dedication, as one commentator put it, “was received with embarrassment.” Yet neither dedication was a coincidence: both works being crucially important in the respective composers’ oeuvres, it is understandable that they should have been chosen to honor a highly respected colleague.

UMS premiere: Harold Bauer; January 1902 in University Hall. Orchestral performance by the Chicago Symphony Orchestra under the baton of Frederick Stock; May 1921 in Hill Auditorium.

The Mephisto Waltz is the first of
four such title works Liszt wrote, this one in 1860. Goethe’s Faust, one
of his favorite pieces of literature, inspired these and many of Liszt’s compositions, but this music is based on a scene from Nicolaus Lenau’s poetic setting of the legend. Subtitled “The Dance in the Village Tavern,”
the story inscribed at length in Liszt’s score follows in brief:

Faust and Mephistopheles enter
a village tavern where a wedding celebration is in progress. Faust becomes enamored of a dark-eyed beauty, while Mephistopheles takes over the fiddle-playing. The dancers become intoxicated by his demonically inspired music-making and the

party becomes a bacchanalia. The dancers trip to the meadows, with Mephistopheles’ laughter echoing from time to time as a double-note trill. Finally, the nightingale’s song is heard. The heavy desire pulls them down. And they are swallowed in the boiling sea of ecstasy.

Liszt scored this work first for full orchestra, then later transcribed it
for piano solo and for two pianos.
The Mephisto Waltz is a grand showpiece; it presents the performer with technical problems that are truly diabolical. There are few compositions that offer such a wealth of dazzling pyrotechnics in so few minutes.

UMS premiere: This piece has never been performed on a UMS recital.

· US President Grover Cleveland dedicates the Statue of Liberty
· Coca-Cola is invented by American pharmacist Dr. John Pemberton · The Upjohn Company is founded in Kalamazoo

Tchaikovsky’s name is usually associated with the big orchestral and theatrical genres such as symphony, concerto, opera, and ballet, and it is less common to think of him as a composer of solo piano
or chamber works. Yet he cultivated just about every musical genre that was current during his time, and
he certainly did not neglect piano music. Over the years, he published numerous collections of mostly short piano works. His larger compositions for solo piano include The Seasons, a suite of 12 exquisite character pieces, as well as the two works heard at this recital: the Grand Sonata in G Major and the remarkable Dumka.

A dumka is a Slavic folksong
of elegiac character, best known
in art music from the works of Tchaikovsky’s Czech contemporary, Antonín Dvořák. Tchaikovsky’s Dumka starts and ends with a simple statement of the main melody; in between we hear a considerable number of virtuoso variations on that melody, exploring a number of different characters.

The work is crowned by a brilliant cadenza, which leads to a powerful climax.

Tchaikovsky
UMS premiere: This piece has never been performed on a UMS recital.

· Leo Tolstoy’s Anna Karenina is published
· E. Remington and Sons introduce their No. 2 typewriter in the US, the

Tchaikovsky published only one piano sonata during his lifetime (a sonata written during his student years was printed posthumously). The Grand Sonata in G Major is a romantic virtuoso showpiece that at the same time follows the rigorous formal

rules of the classical sonata. Unlike many other 19th-century composers, Tchaikovsky was not a concert pianist himself, but his close friend, Nikolai Rubinstein, was an accomplished performer, and it was he who gave the first performance of the Sonata. (The younger brother of the more famous pianist-composer Anton Rubinstein, Nikolai was the founder of the Moscow Conservatory, and he invited Tchaikovsky to join him on the new school’s faculty.) Some years earlier, Nikolai Rubinstein had been sharply critical of Tchaikovsky’s First Piano Concerto, but this time, he seemed to have no objections.

The Sonata was published with
a dedication to another important pianist of the time: Karl Klindworth
of Germany, who had been a student
of Liszt and one of the earliest exponents of the Sonata in b minor. For a while, Klindworth was Tchaikovsky’s colleague at the Moscow Conservatory.

The four-movement Sonata opens with some heavy harmonic progressions, and this kind of energetic, saturated sound recurs frequently as one of the work’s fundamental types of material. There are also some gentler and lighter moments in the first movement, but it is basically a study of thundering octaves and large fistfuls of chords, traversing many keys, unrelenting to the end.

As a total contrast, the second movement begins as a quiet prayer or reverie that emphasizes a single note with an almost obsessive insistence. The second group of themes flows more freely and becomes more animated, ending up with a mass of full chords reminiscent of those in
the first movement. Both thematic groups are then repeated with some embellishments and other alterations, before a very quiet and subdued coda.

The scherzo and trio form a single perpetual motion in rapid 16th-notes; the “trio,” or middle section, is distinguished only by a new melodic motive and a jump into a new key. Otherwise, the movement is a brilliant miniature that has some of the lightness and sparkling wit of

Mendelssohn’s “fairy” scherzos. In the finale, all the previous

elements of the Sonata come together in a single monumental pageant: powerful chord progressions, virtuoso runs, and lyrical melodic moments,

all combined to bring the Sonata to a conclusion befitting its grandeur.

Since his triumph at the 11th International Tchaikovsky Competition in 1998, Denis Matsuev has become
a virtuoso in the grandest of Russian pianistic tradition and has firmly established himself as one of the most prominent pianists performing today.

the Staatskapelle Dresden during
the 2017–18 season, Mr. Matsuev performed in numerous concerts
in Dresden and on tour with music director Christian Thielemann, and
he is continually re-engaged with the legendary Russian orchestras such as the St. Petersburg Philharmonic, the Mariinsky Orchestra, and the Russian National Orchestra. In the current season, he is artist-in-residence at the Montreal Symphony Orchestra.

As a recitalist, Mr. Matsuev
can be heard in all the world’s greatest halls, including a yearly appearance at Carnegie Hall. His extensive discography includes highly acclaimed recital discs as
well as concerto recordings with
the New York Philharmonic, London Symphony, and Symphonieorchester des Bayerischen Rundfunks, and cyclical recordings of the great Russian concertos with the Mariinsky Orchestra and Valery Gergiev.

As one of Russia’s pre-eminent musicians and a prominent public figure, Mr. Matsuev is a member
of the Presidential Council for
Culture and Arts and was the official ambassador for the 2018 FIFA World Cup, which he opened with a globally broadcast performance on Moscow’s Red Square. Mr. Matsuev is also artistic director of the Rachmaninoff Foundation in Switzerland, and curates and directs his own prestigious concert series “Denis Matsuev Invites” at the Great Hall of the Moscow Conservatory. He chaired the piano jury at the 2019 Tchaikovsky Competition.

Since 2008, Mr. Matsuev has presided over New Names, a charitable foundation that selects and supports talented young Russian musicians, artists, and poets in the achievement of their professional goals. More than 10,000 children have received monetary grants and/ or the opportunity to perform at the professional stage. For his work with New Names, Mr. Matsuev was named a UNESCO Goodwill Ambassador.

THANK YOU TO SUPPORTERS OF THIS EVENING’S PERFORMANCE