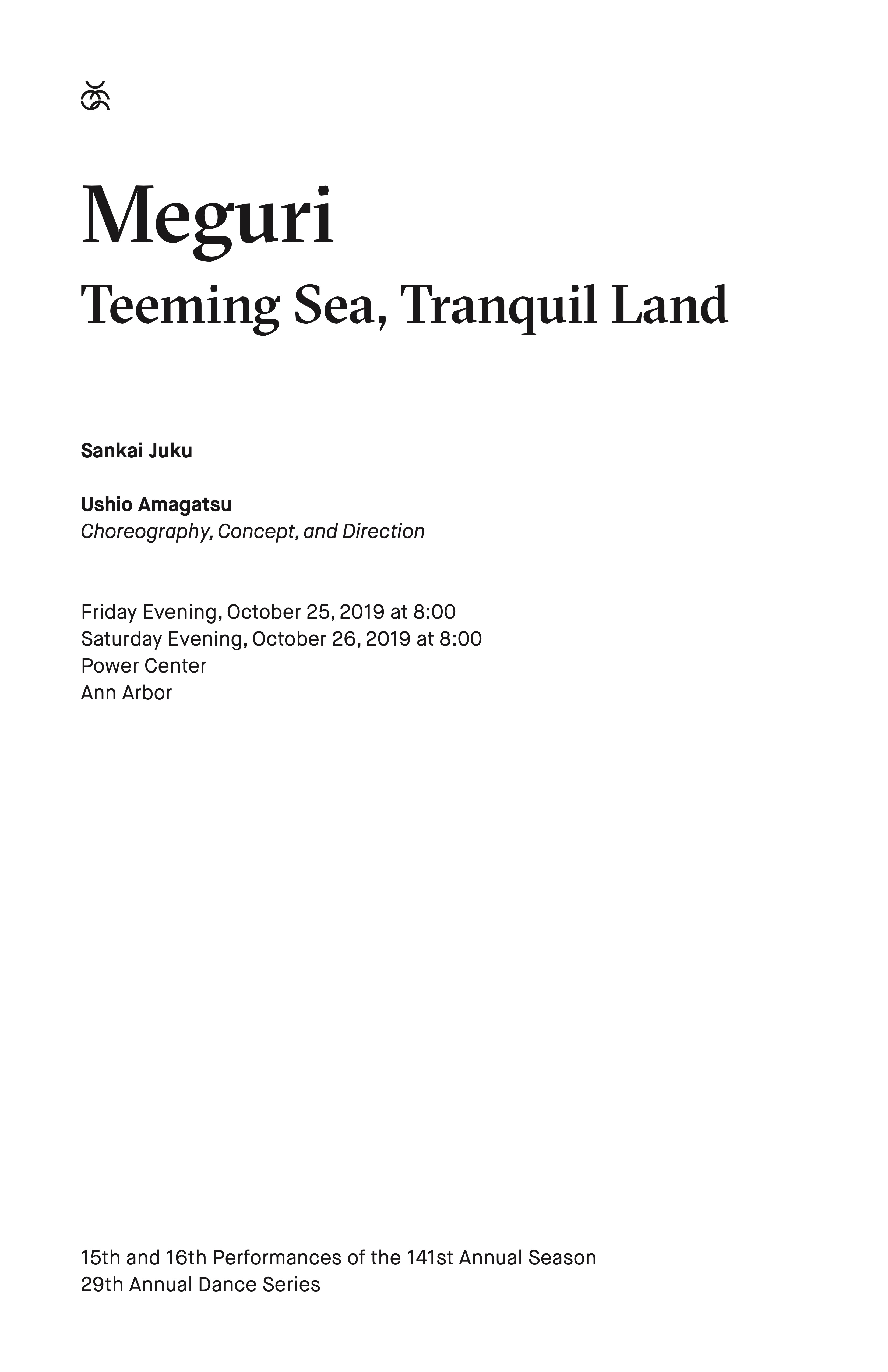 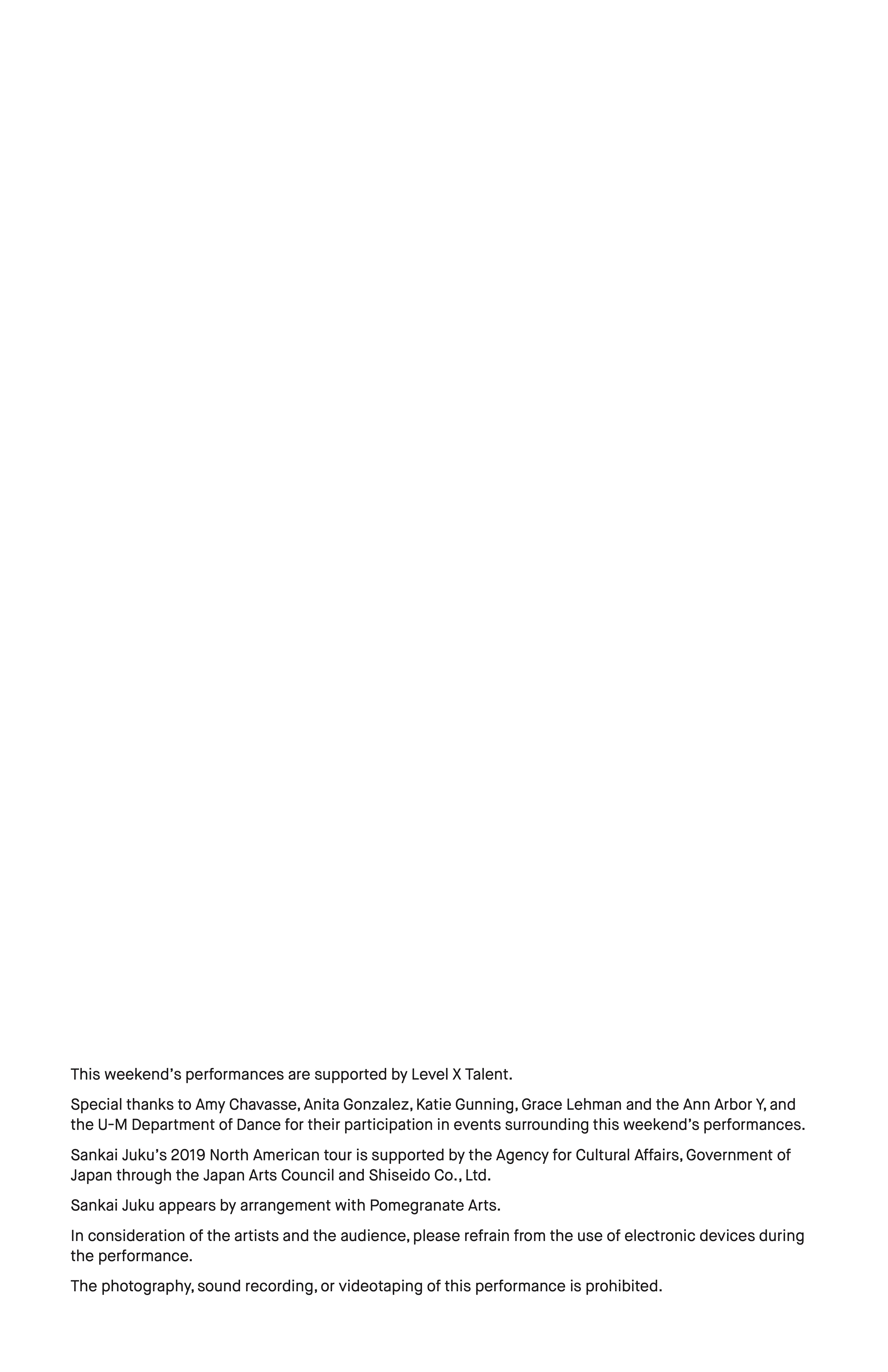 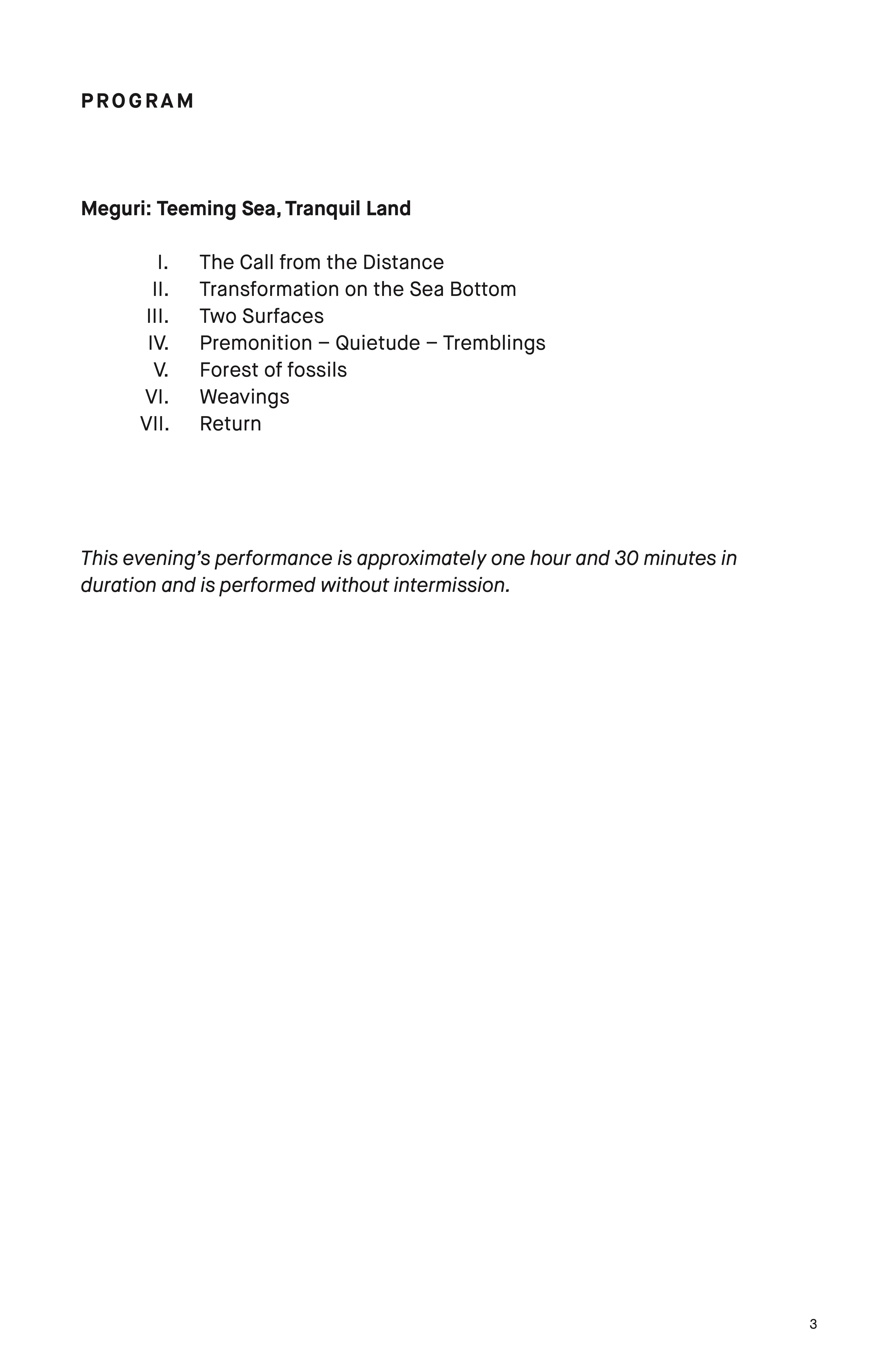 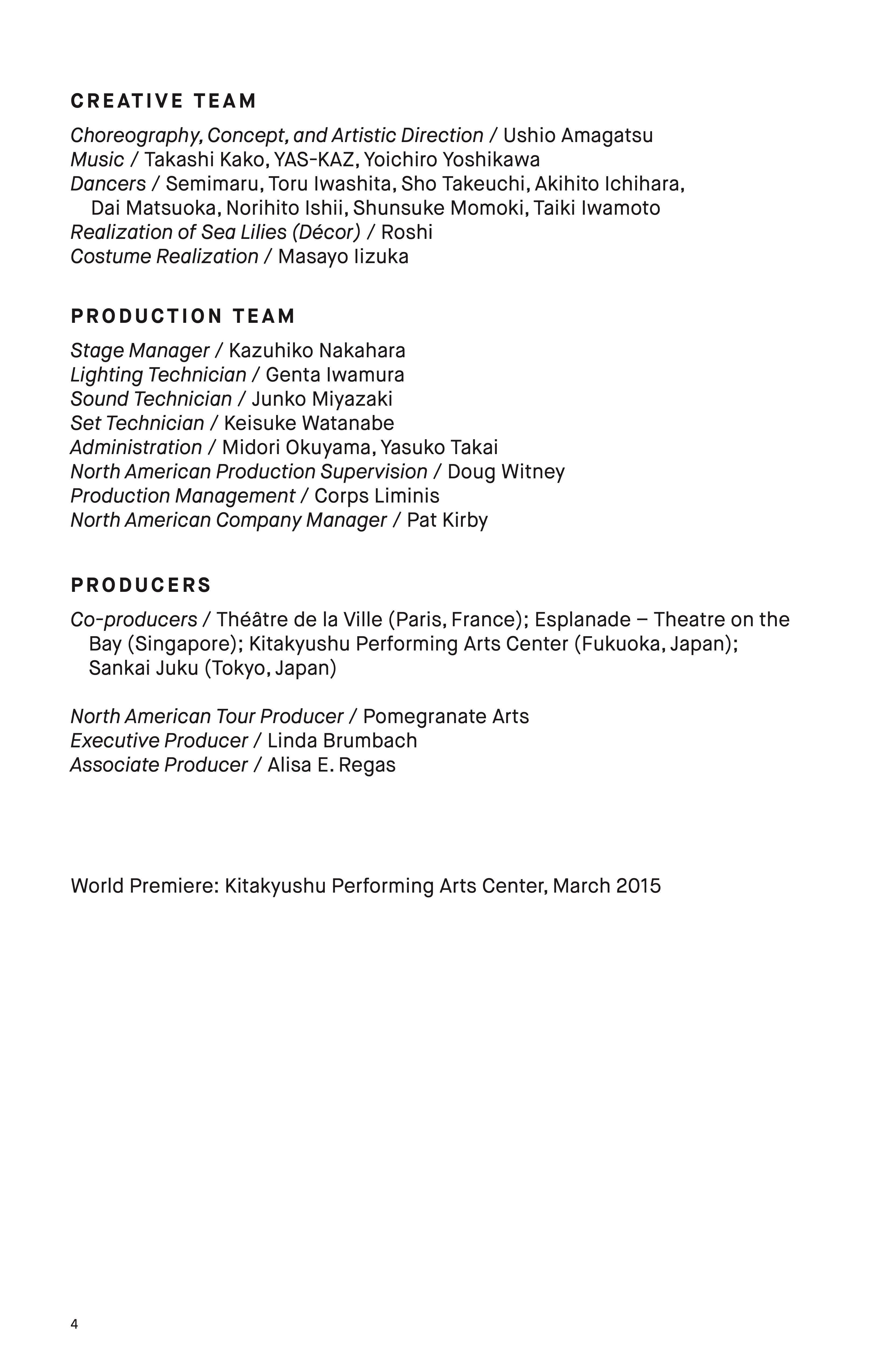 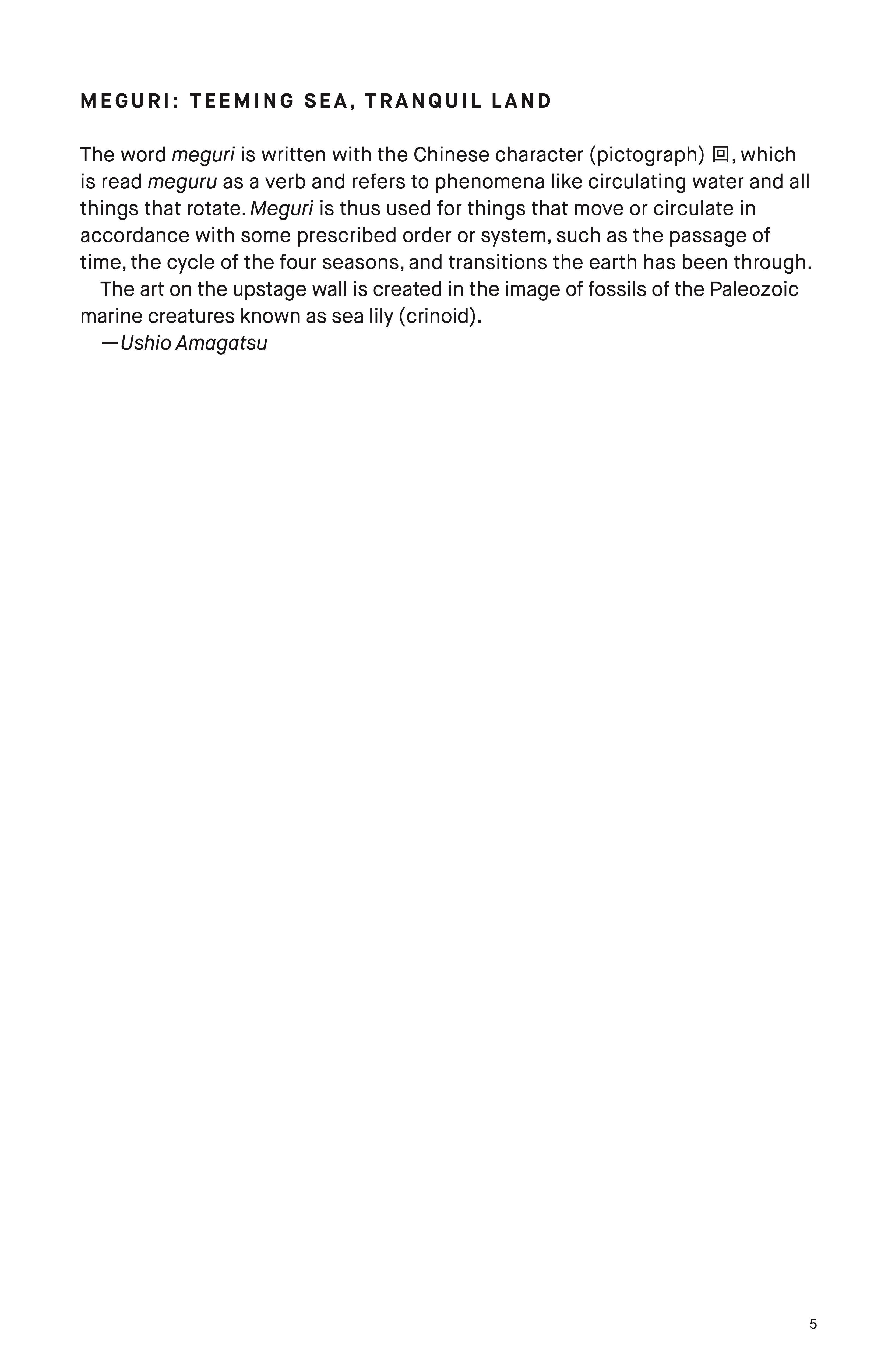 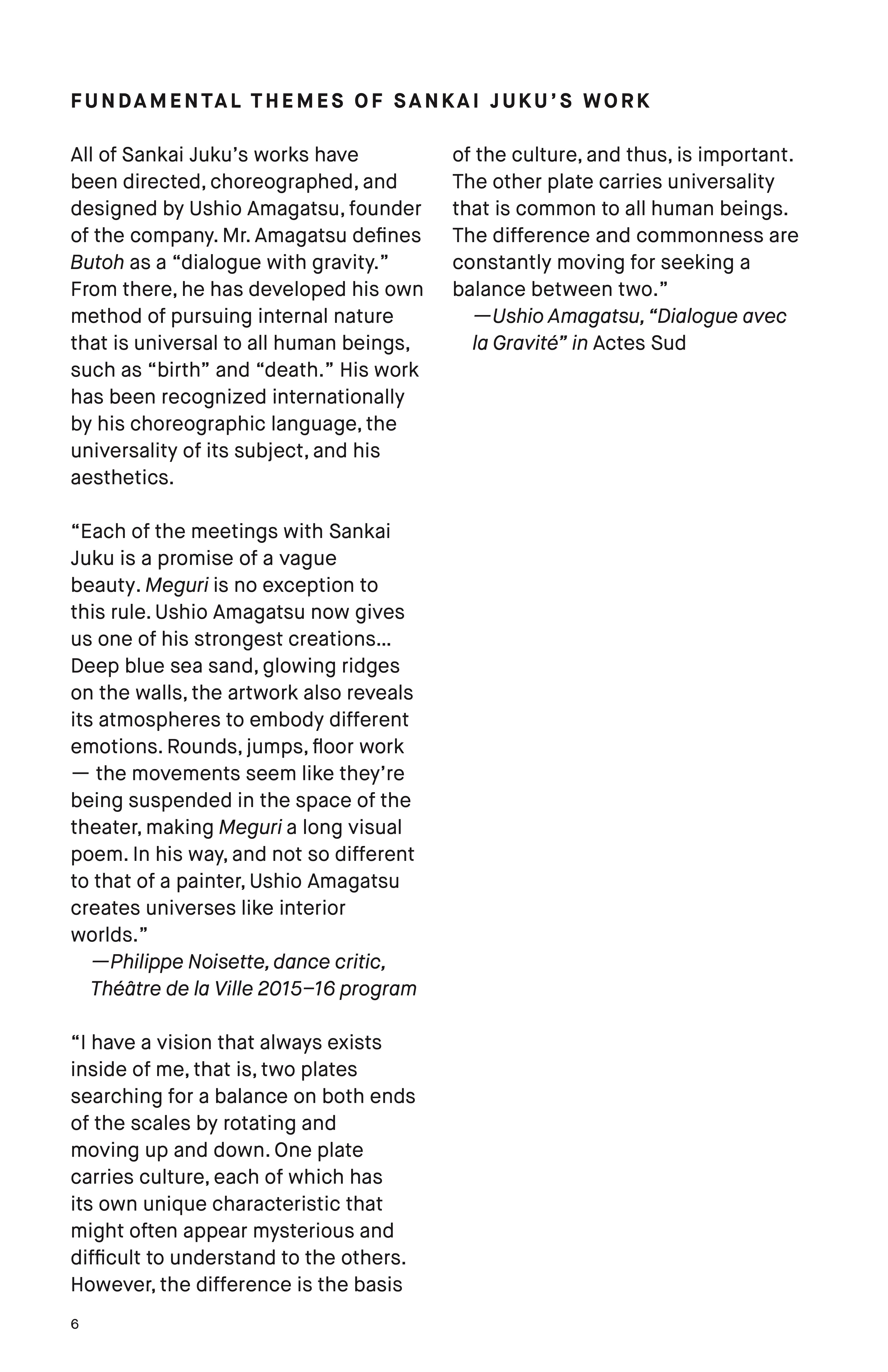 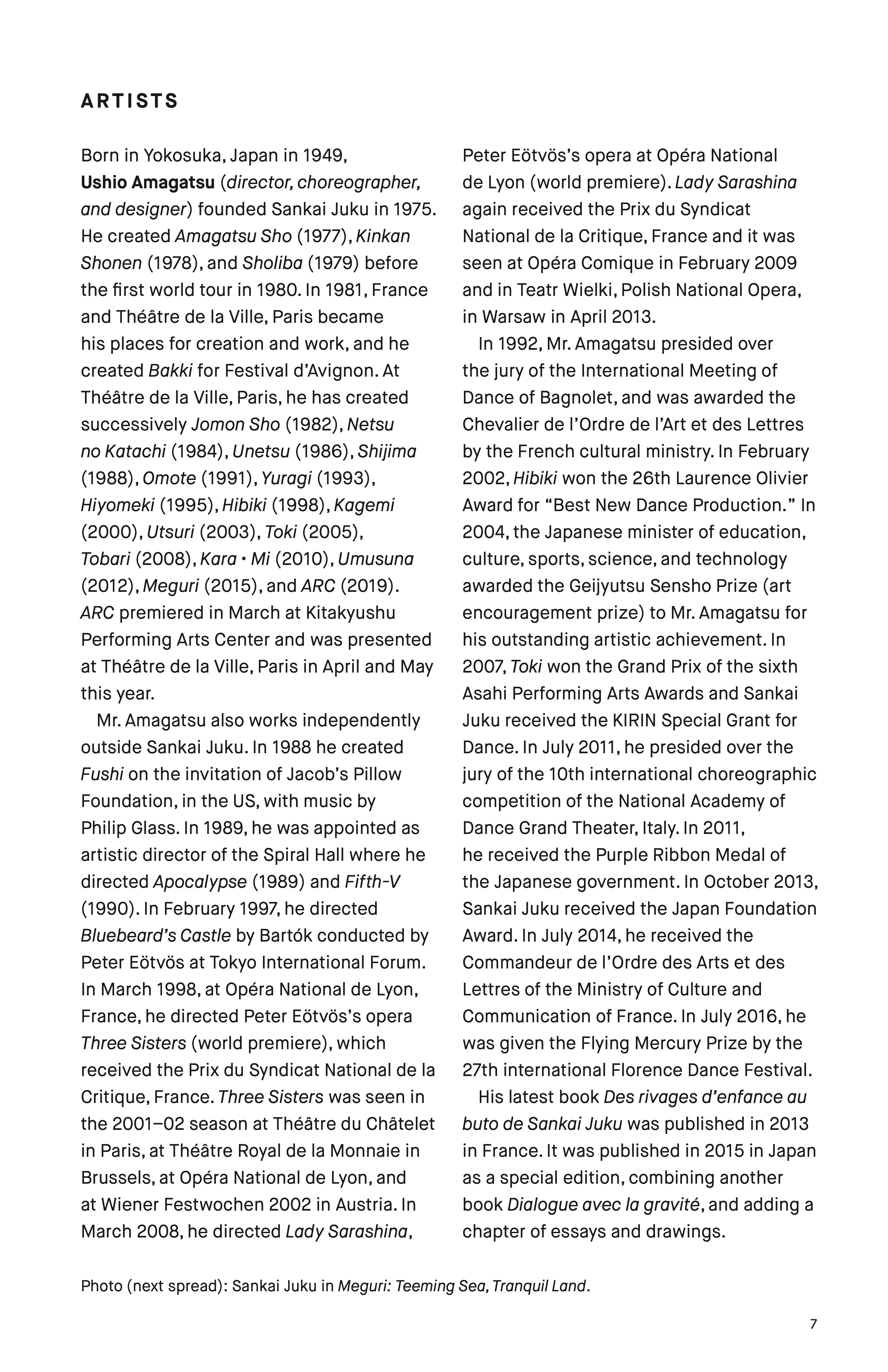 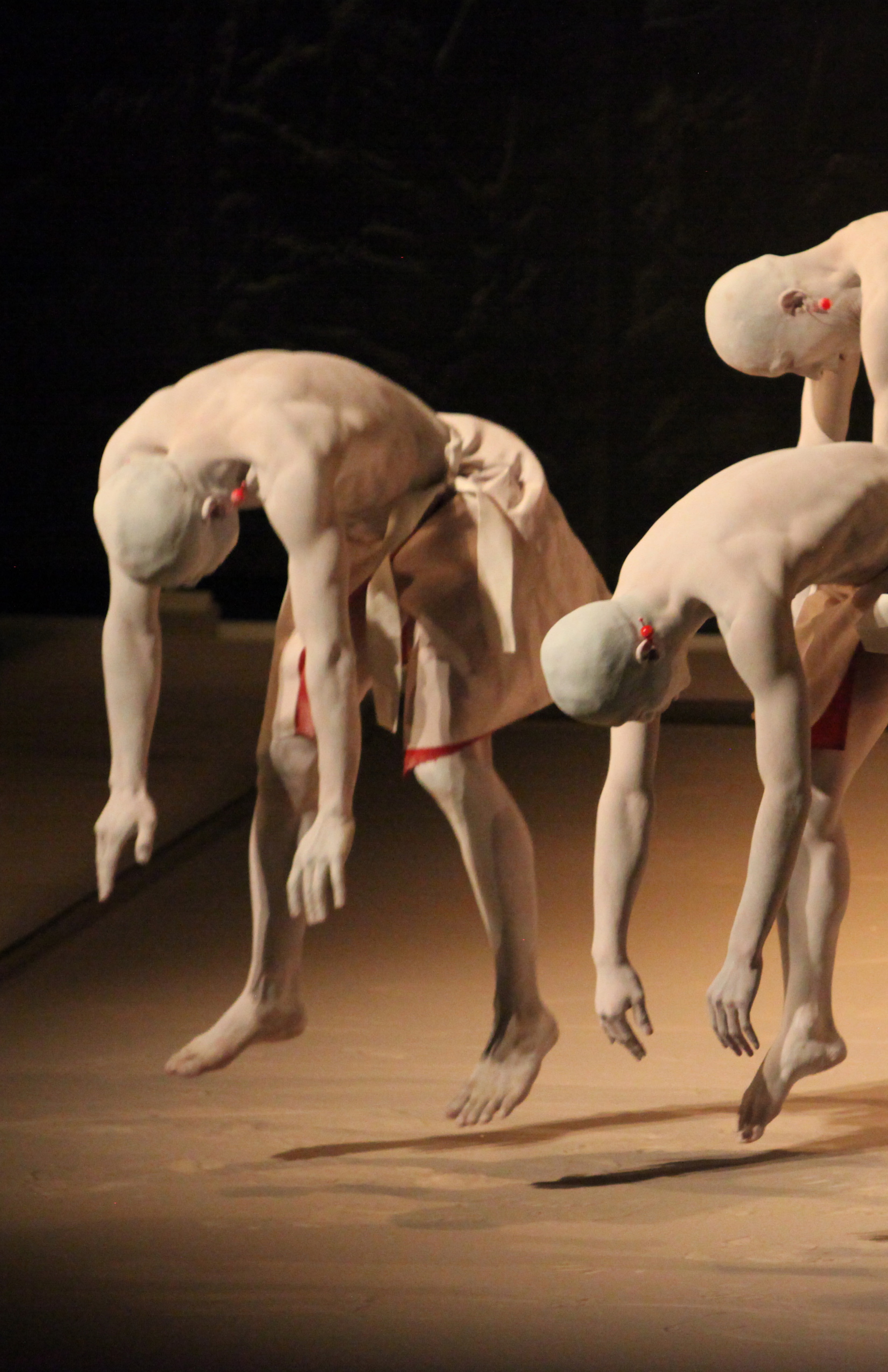 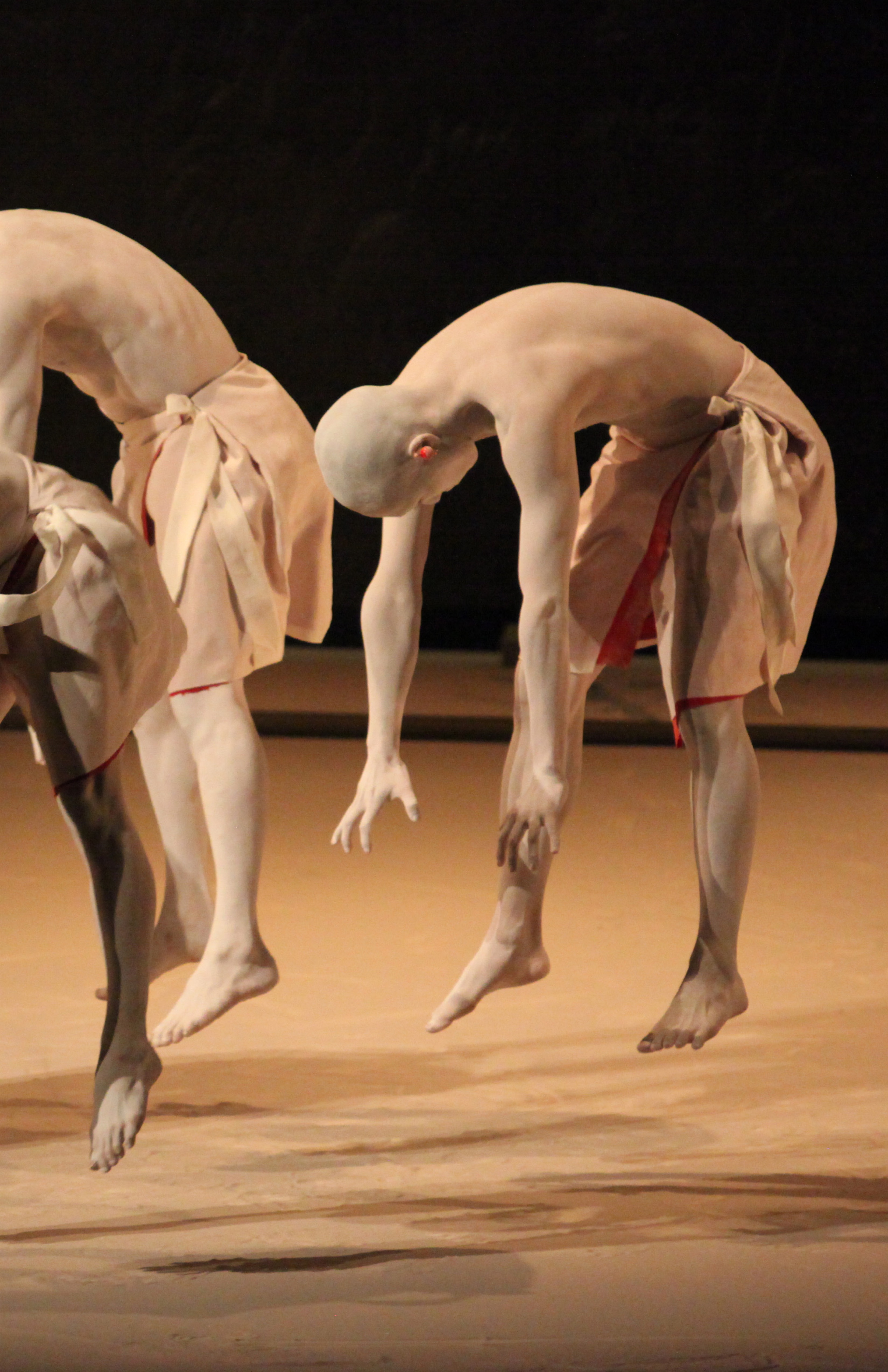 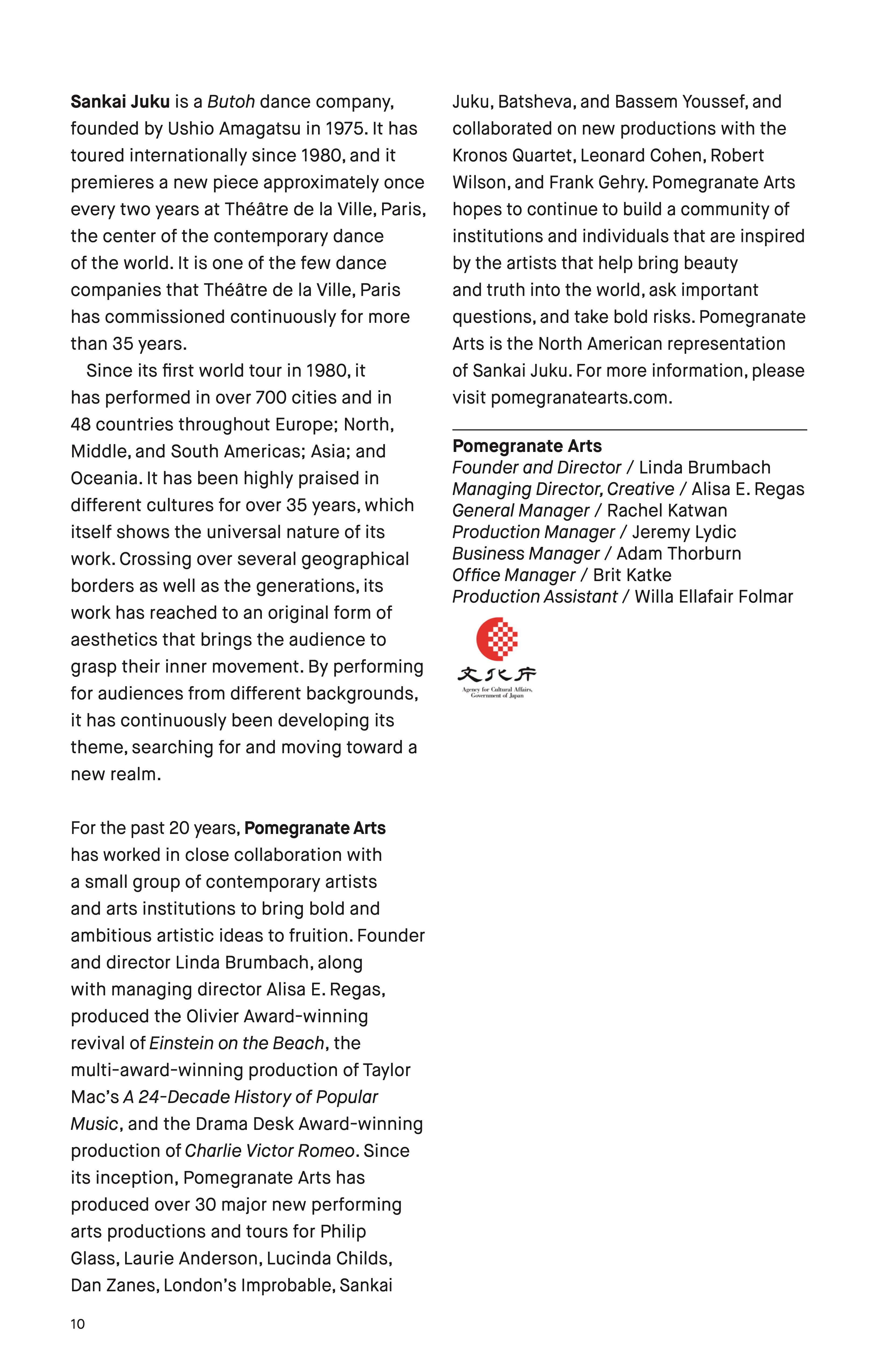 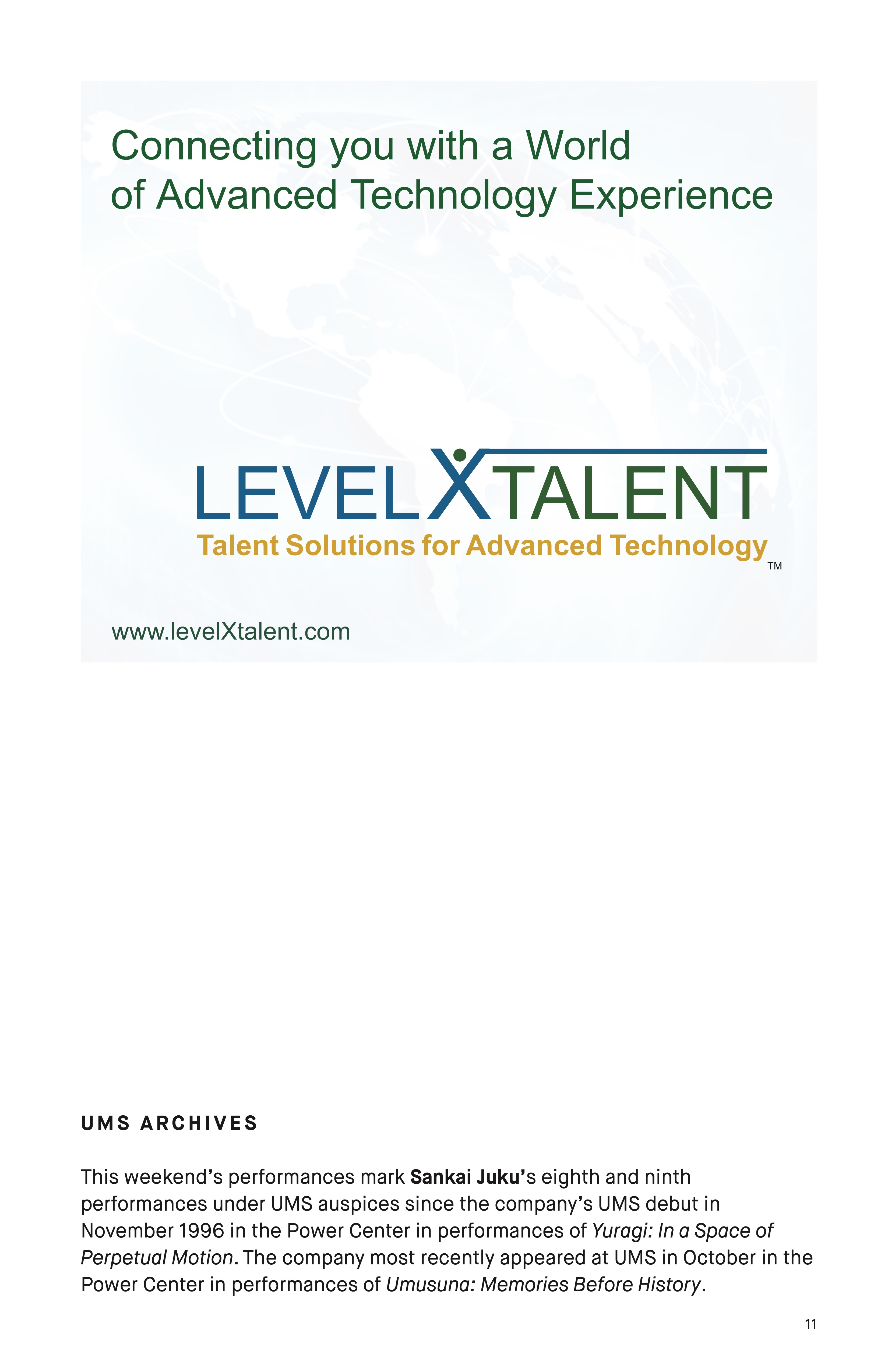 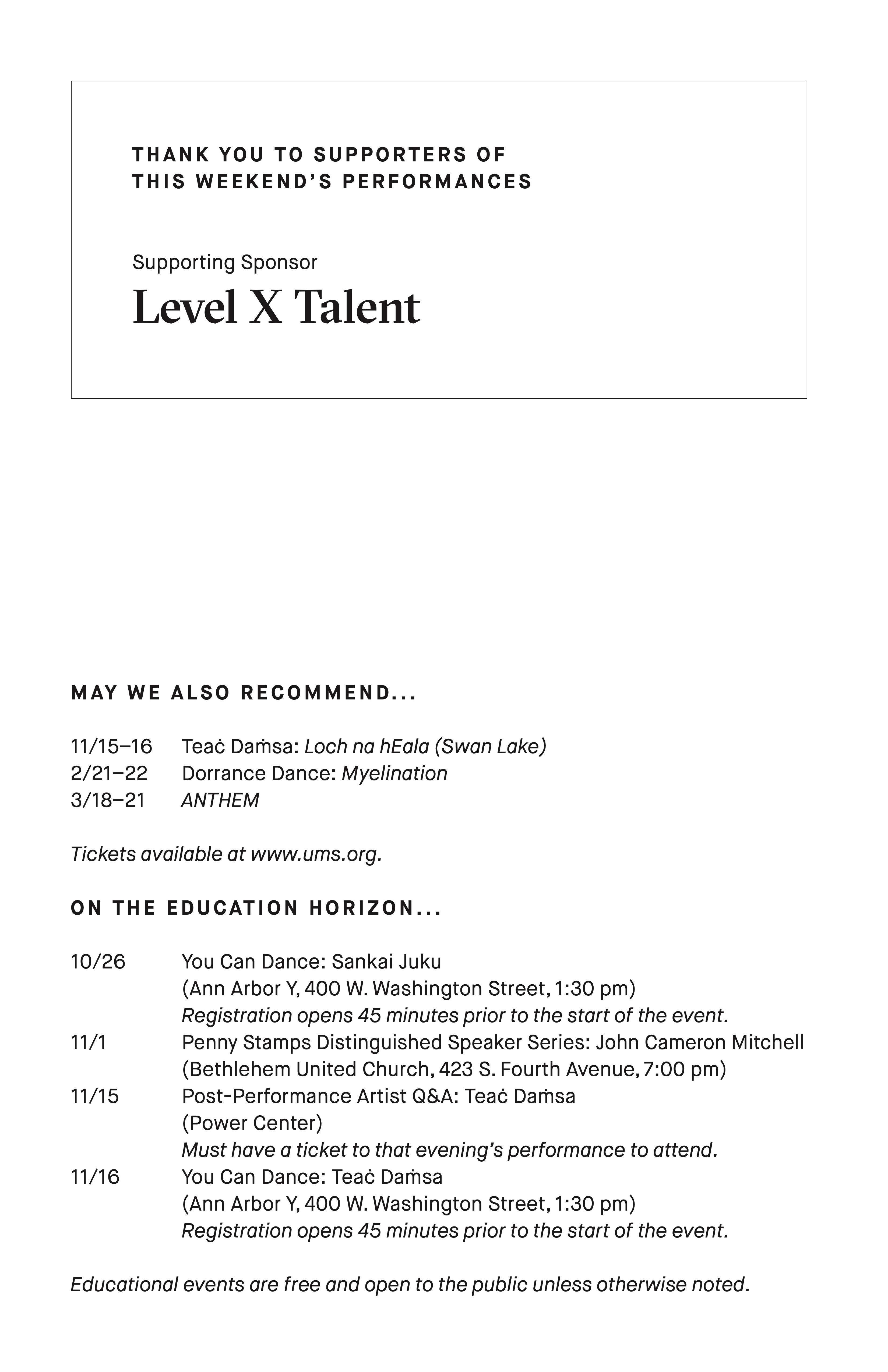 This weekend’s performances are supported by Level X Talent.

Special thanks to Amy Chavasse, Anita Gonzalez, Katie Gunning, Grace Lehman and the Ann Arbor Y, and the U-M Department of Dance for their participation in events surrounding this weekend’s performances.

Sankai Juku’s 2019 North American tour is supported by the Agency for Cultural Affairs, Government of Japan through the Japan Arts Council and Shiseido Co., Ltd.

This evening’s performance is approximately one hour and 30 minutes in duration and is performed without intermission.

The word meguri is written with the Chinese character (pictograph) 回, which is read meguru as a verb and refers to phenomena like circulating water and all things that rotate. Meguri is thus used for things that move or circulate in accordance with some prescribed order or system, such as the passage of time, the cycle of the four seasons, and transitions the earth has been through.

The art on the upstage wall is created in the image of fossils of the Paleozoic marine creatures known as sea lily (crinoid).

All of Sankai Juku’s works have
been directed, choreographed, and designed by Ushio Amagatsu, founder of the company. Mr. Amagatsu defines Butoh as a “dialogue with gravity.” From there, he has developed his own method of pursuing internal nature that is universal to all human beings, such as “birth” and “death.” His work has been recognized internationally by his choreographic language, the universality of its subject, and his aesthetics.

“Each of the meetings with Sankai Juku is a promise of a vague
beauty. Meguri is no exception to this rule. Ushio Amagatsu now gives us one of his strongest creations... Deep blue sea sand, glowing ridges on the walls, the artwork also reveals its atmospheres to embody different emotions. Rounds, jumps, floor work — the movements seem like they’re being suspended in the space of the theater, making Meguri a long visual poem. In his way, and not so different to that of a painter, Ushio Amagatsu creates universes like interior worlds.”

“I have a vision that always exists inside of me, that is, two plates searching for a balance on both ends of the scales by rotating and

moving up and down. One plate carries culture, each of which has its own unique characteristic that might often appear mysterious and difficult to understand to the others. However, the difference is the basis

of the culture, and thus, is important. The other plate carries universality that is common to all human beings. The difference and commonness are constantly moving for seeking a balance between two.”

Mr. Amagatsu also works independently outside Sankai Juku. In 1988 he created Fushi on the invitation of Jacob’s Pillow Foundation, in the US, with music by
Philip Glass. In 1989, he was appointed as artistic director of the Spiral Hall where he directed Apocalypse (1989) and Fifth-V (1990). In February 1997, he directedBluebeard’s Castle by Bartók conducted by Peter Eötvös at Tokyo International Forum. In March 1998, at Opéra National de Lyon, France, he directed Peter Eötvös’s operaThree Sisters (world premiere), which received the Prix du Syndicat National de la Critique, France. Three Sisters was seen in the 2001–02 season at Théâtre du Châtelet in Paris, at Théâtre Royal de la Monnaie in Brussels, at Opéra National de Lyon, and

at Wiener Festwochen 2002 in Austria. In March 2008, he directed Lady Sarashina,

In 1992, Mr. Amagatsu presided over
the jury of the International Meeting of Dance of Bagnolet, and was awarded the Chevalier de l’Ordre de l’Art et des Lettres by the French cultural ministry. In February 2002, Hibiki won the 26th Laurence Olivier Award for “Best New Dance Production.” In 2004, the Japanese minister of education, culture, sports, science, and technology awarded the Geijyutsu Sensho Prize (art encouragement prize) to Mr. Amagatsu for his outstanding artistic achievement. In 2007, Toki won the Grand Prix of the sixth Asahi Performing Arts Awards and Sankai Juku received the KIRIN Special Grant for Dance. In July 2011, he presided over the jury of the 10th international choreographic competition of the National Academy of Dance Grand Theater, Italy. In 2011,
he received the Purple Ribbon Medal of the Japanese government. In October 2013, Sankai Juku received the Japan Foundation Award. In July 2014, he received the Commandeur de l’Ordre des Arts et des Lettres of the Ministry of Culture and Communication of France. In July 2016, he was given the Flying Mercury Prize by the 27th international Florence Dance Festival.

Sankai Juku is a Butoh dance company, founded by Ushio Amagatsu in 1975. It has toured internationally since 1980, and it premieres a new piece approximately onceevery two years at Théâtre de la Ville, Paris, the center of the contemporary dance

of the world. It is one of the few dance companies that Théâtre de la Ville, Paris has commissioned continuously for more than 35 years.

Since its first world tour in 1980, it
has performed in over 700 cities and in
48 countries throughout Europe; North, Middle, and South Americas; Asia; and Oceania. It has been highly praised in different cultures for over 35 years, which itself shows the universal nature of its work. Crossing over several geographical borders as well as the generations, its work has reached to an original form of aesthetics that brings the audience to grasp their inner movement. By performing for audiences from different backgrounds, it has continuously been developing its theme, searching for and moving toward a new realm.

For the past 20 years, Pomegranate Arts
has worked in close collaboration with
a small group of contemporary artists
and arts institutions to bring bold and ambitious artistic ideas to fruition. Founder and director Linda Brumbach, along

Juku, Batsheva, and Bassem Youssef, and collaborated on new productions with the Kronos Quartet, Leonard Cohen, Robert Wilson, and Frank Gehry. Pomegranate Arts hopes to continue to build a community of institutions and individuals that are inspired by the artists that help bring beauty

Connecting you with a World
of Advanced Technology Experience