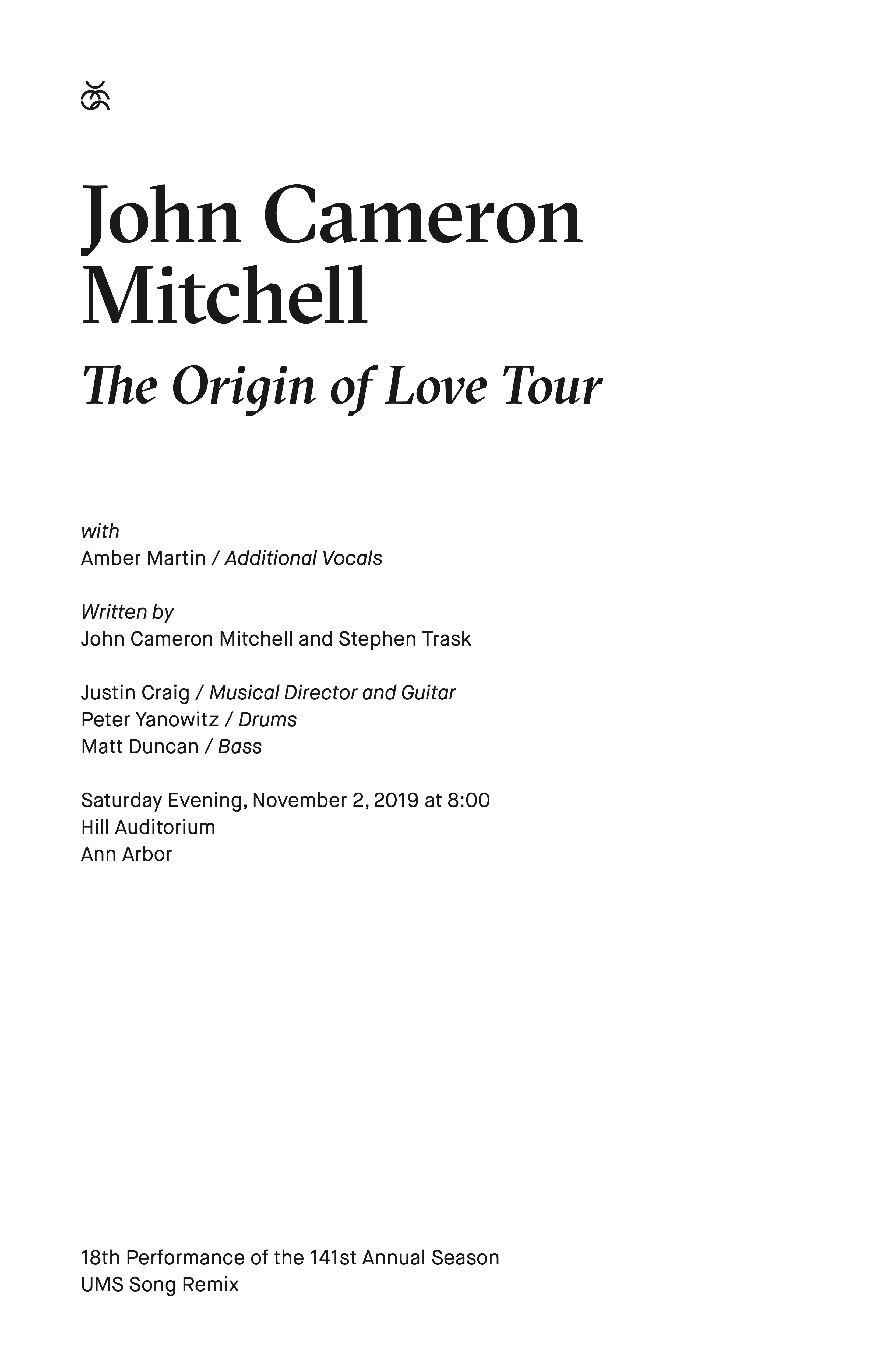 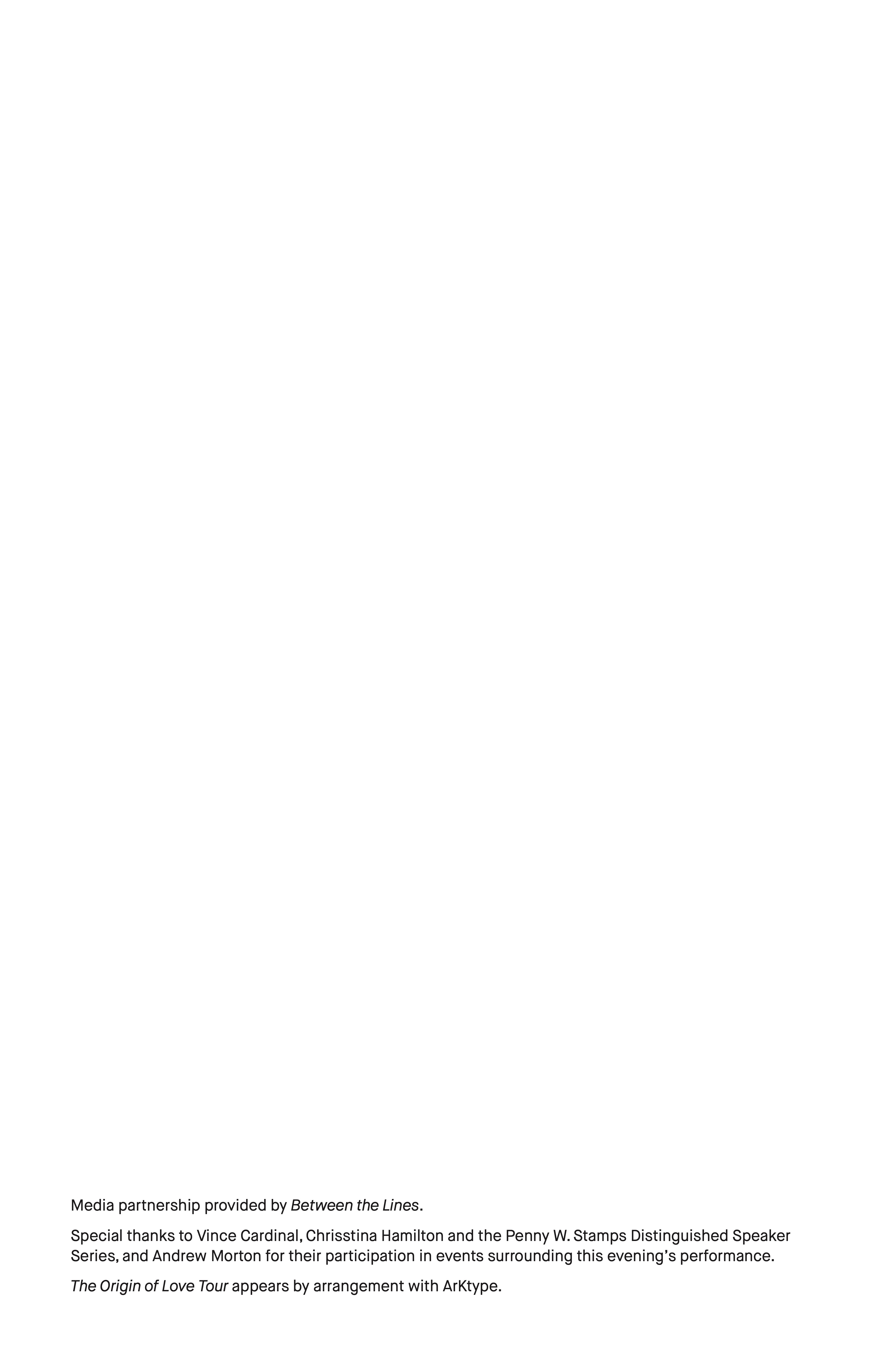 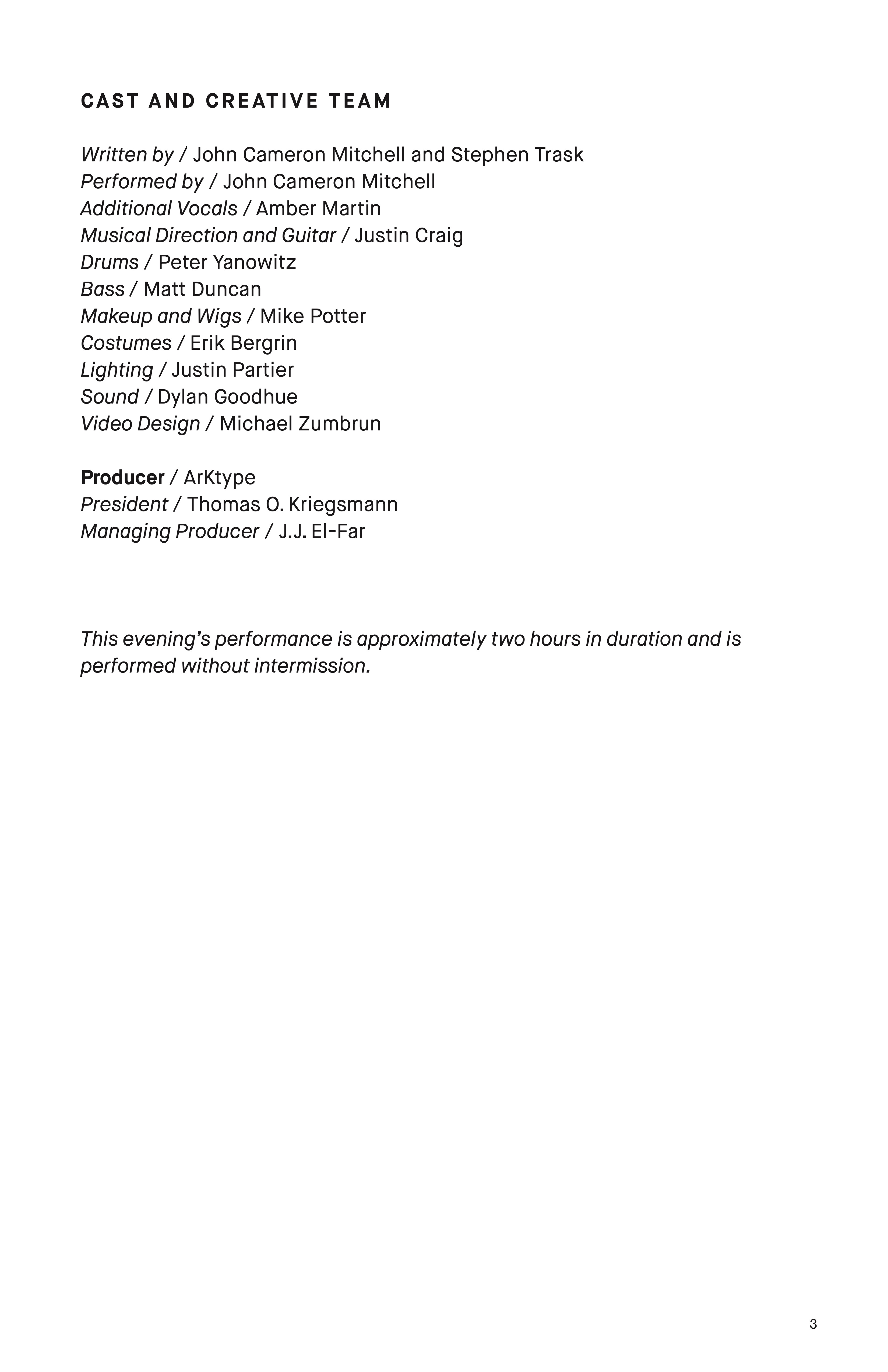 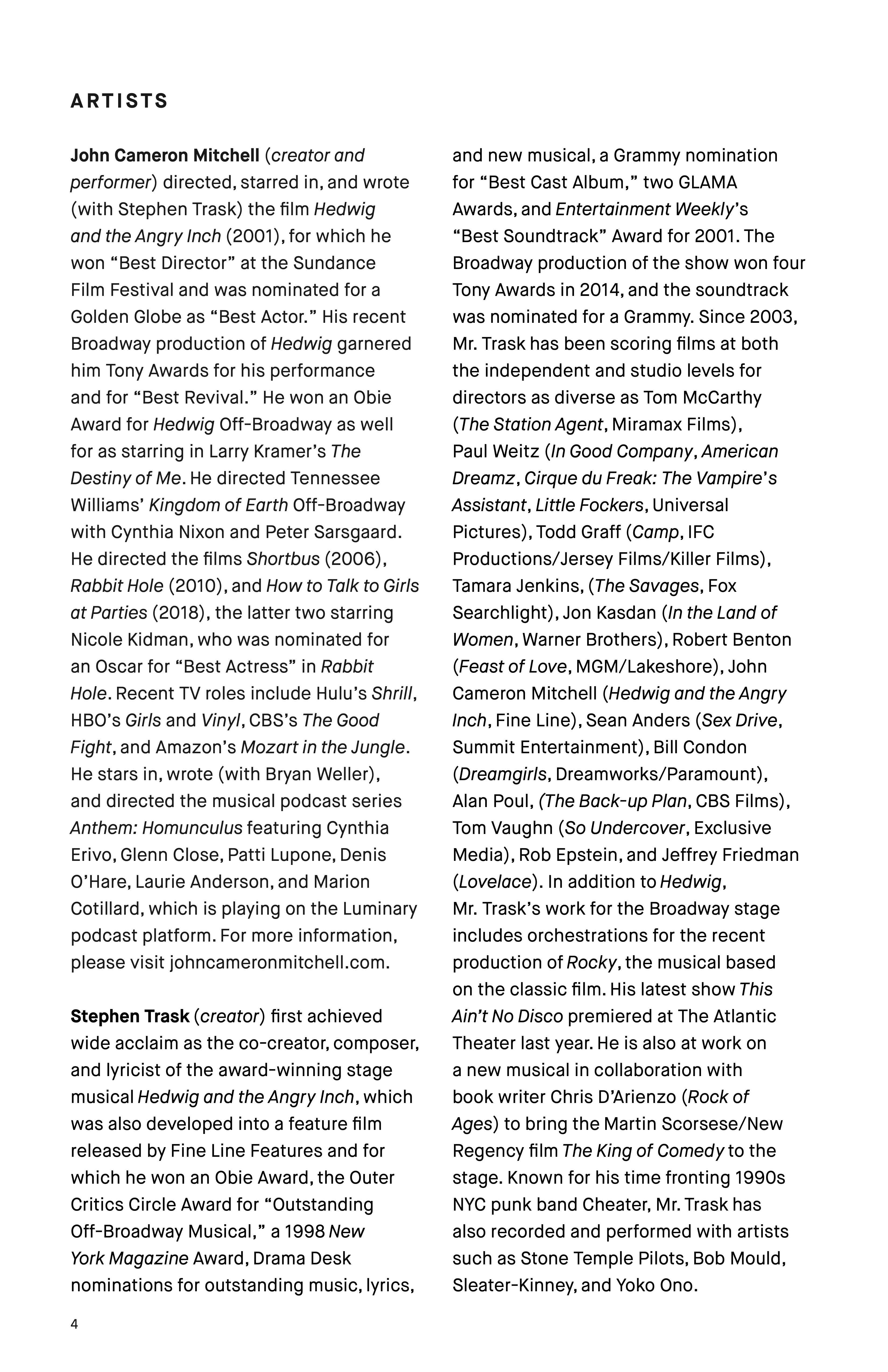 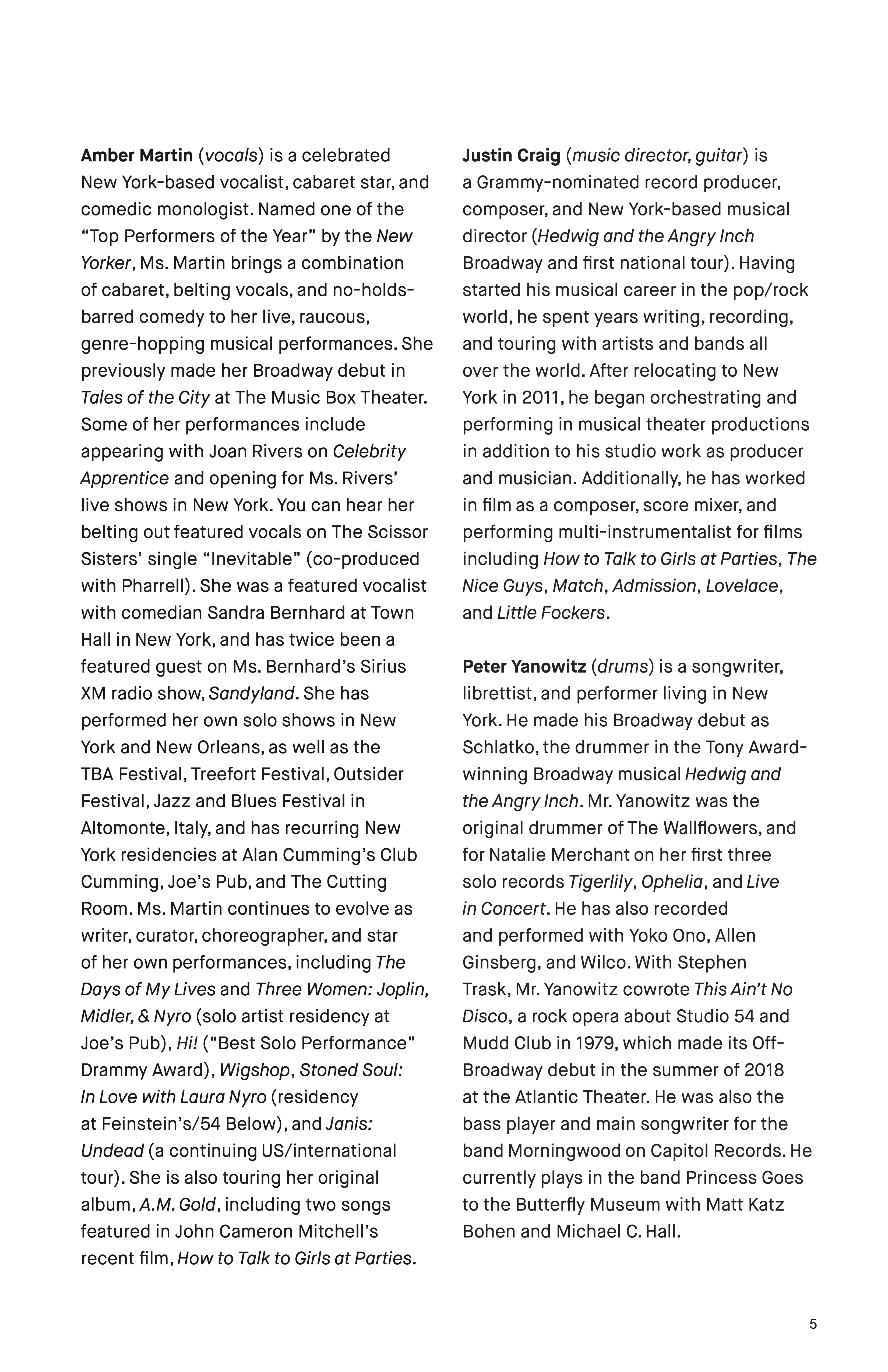 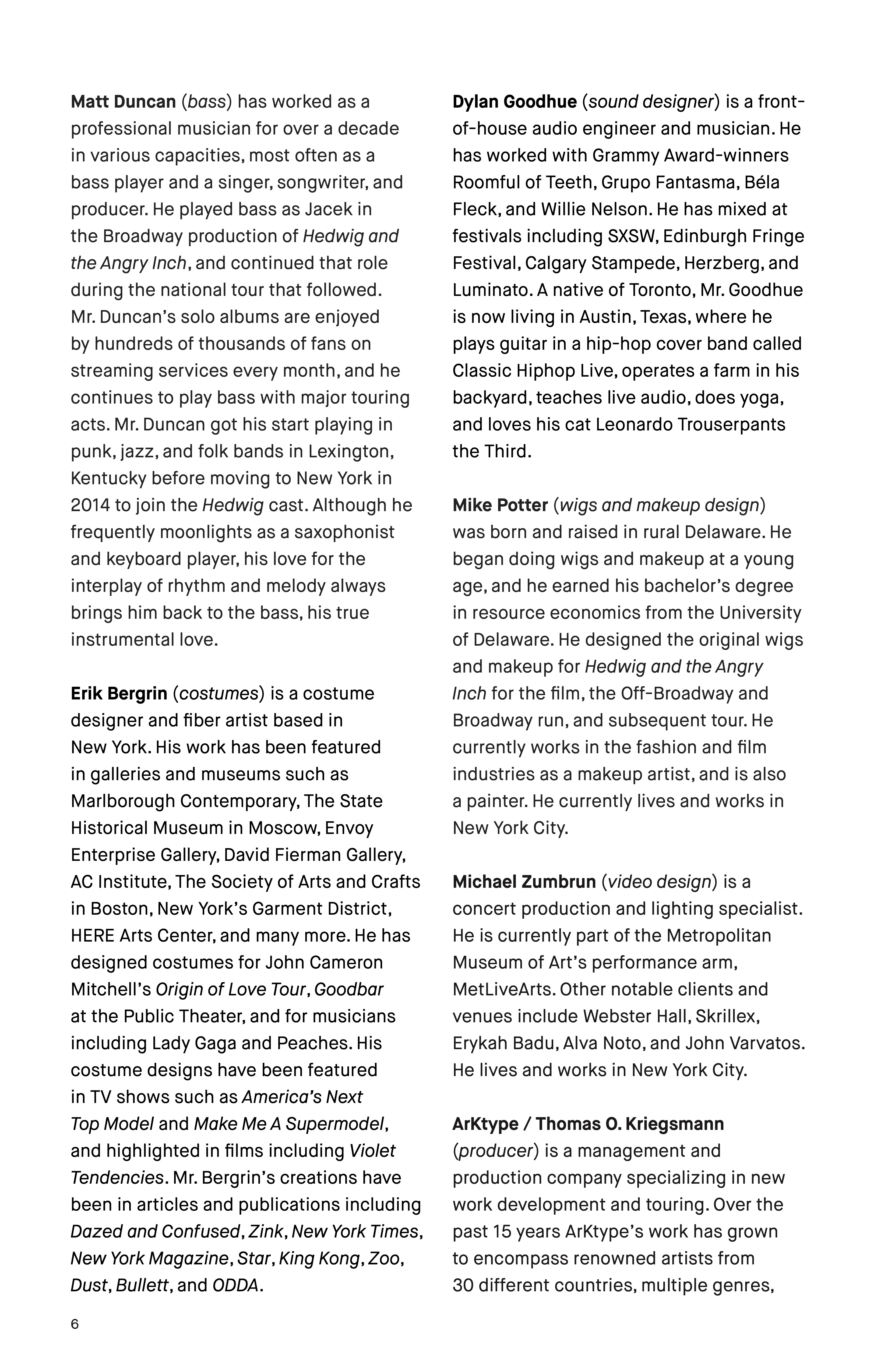 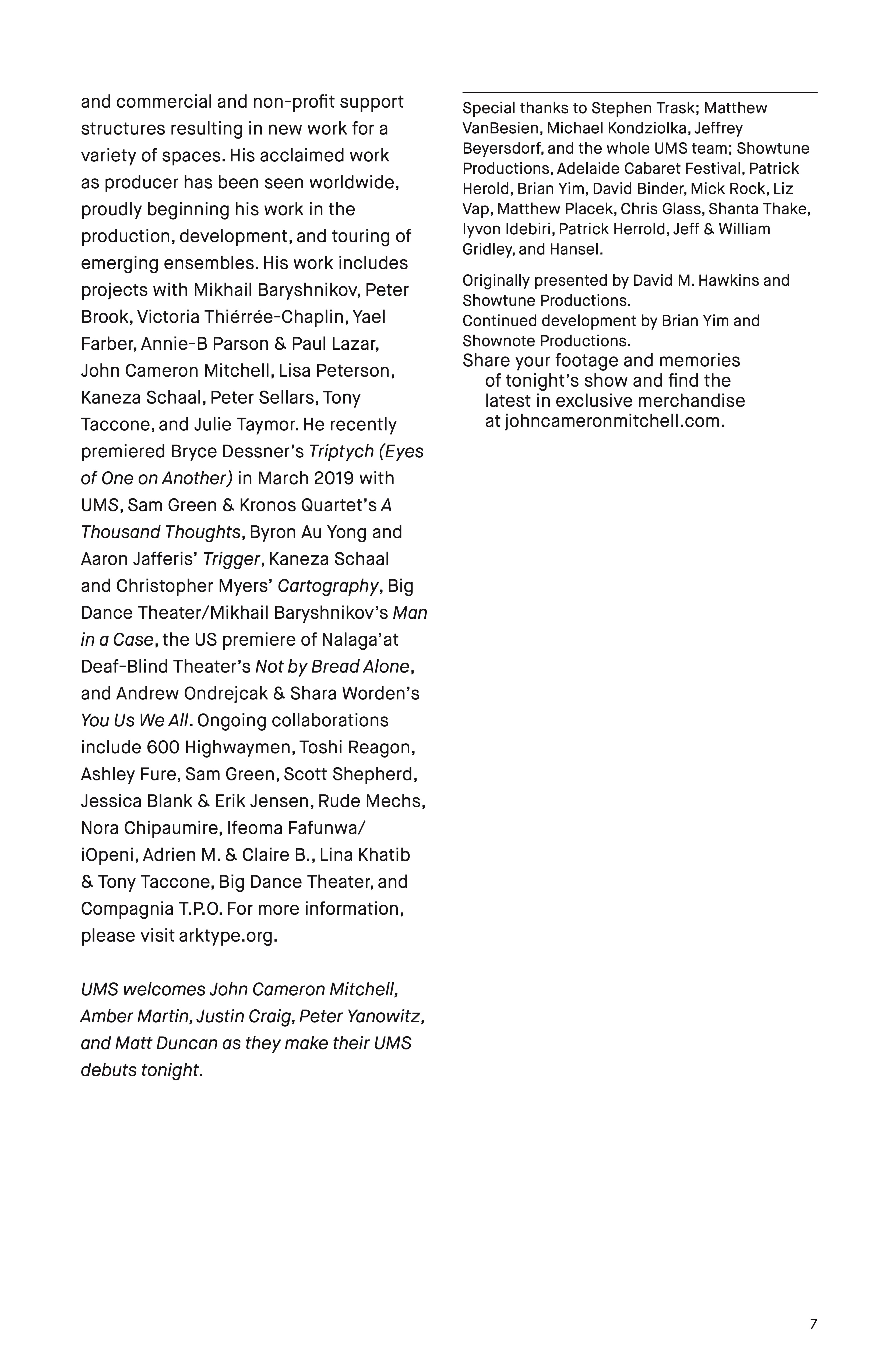 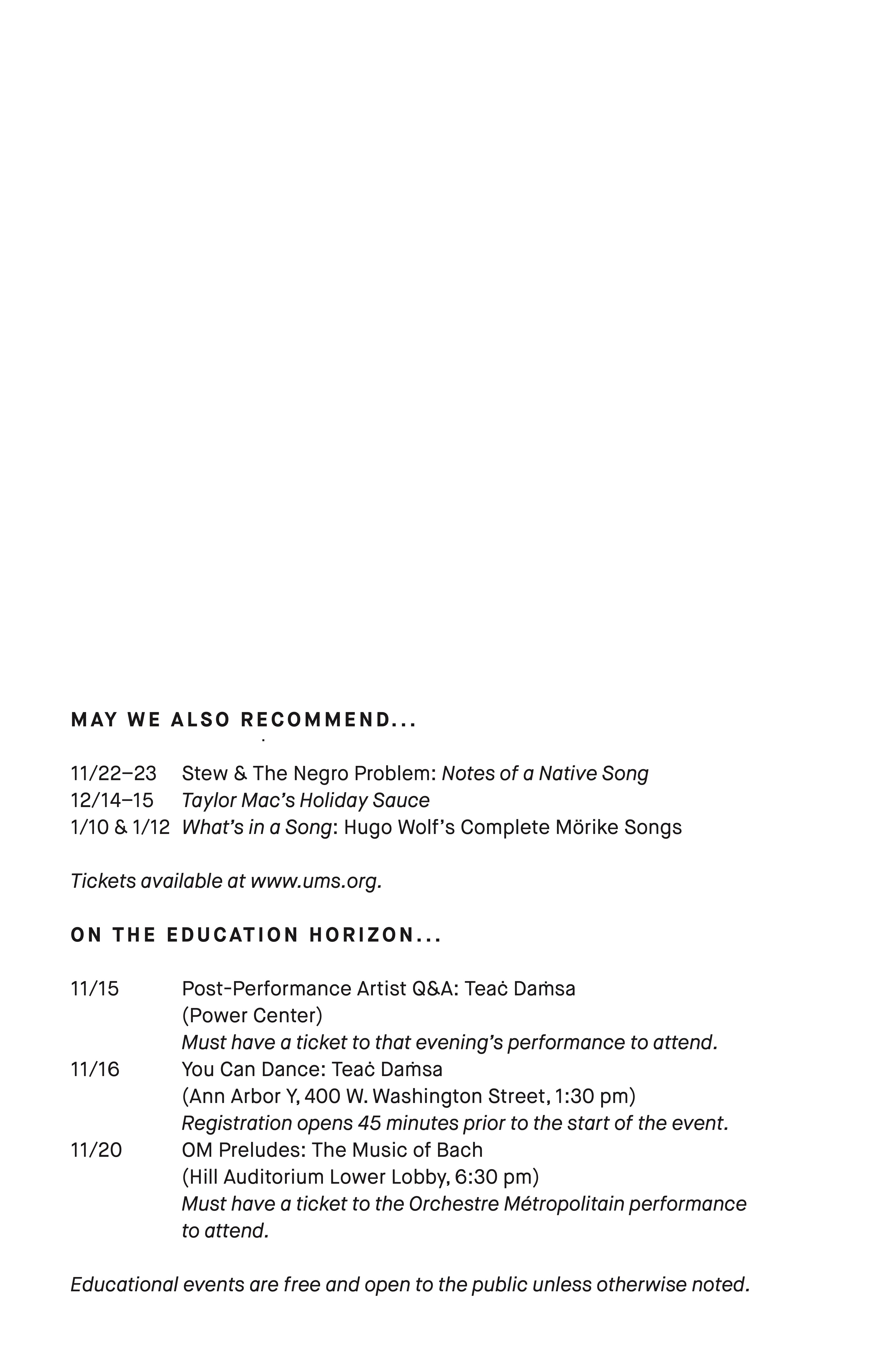 Media partnership provided by Between the Lines.
Special thanks to Vince Cardinal, Chrisstina Hamilton and the Penny W. Stamps Distinguished Speaker

Series, and Andrew Morton for their participation in events surrounding this evening’s performance. The Origin of Love Tour appears by arrangement with ArKtype.

This evening’s performance is approximately two hours in duration and is performed without intermission.

John Cameron Mitchell (creator and performer) directed, starred in, and wrote (with Stephen Trask) the film Hedwig
and the Angry Inch (2001), for which he won “Best Director” at the Sundance Film Festival and was nominated for a Golden Globe as “Best Actor.” His recent Broadway production of Hedwig garnered him Tony Awards for his performance

and for “Best Revival.” He won an Obie Award for Hedwig Off-Broadway as well for as starring in Larry Kramer’s The Destiny of Me. He directed Tennessee Williams’ Kingdom of Earth Off-Broadway with Cynthia Nixon and Peter Sarsgaard. He directed the films Shortbus (2006), Rabbit Hole (2010), and How to Talk to Girls at Parties (2018), the latter two starring Nicole Kidman, who was nominated for

Stephen Trask (creator) first achieved wide acclaim as the co-creator, composer, and lyricist of the award-winning stage musical Hedwig and the Angry Inch, which was also developed into a feature film released by Fine Line Features and for which he won an Obie Award, the Outer Critics Circle Award for “Outstanding Off-Broadway Musical,” a 1998 New
York Magazine Award, Drama Desk nominations for outstanding music, lyrics,

and new musical, a Grammy nomination for “Best Cast Album,” two GLAMA Awards, and Entertainment Weekly’s
“Best Soundtrack” Award for 2001. The Broadway production of the show won four Tony Awards in 2014, and the soundtrack was nominated for a Grammy. Since 2003, Mr. Trask has been scoring films at both the independent and studio levels for directors as diverse as Tom McCarthy

Amber Martin (vocals) is a celebrated
New York-based vocalist, cabaret star, and comedic monologist. Named one of the “Top Performers of the Year” by the New Yorker, Ms. Martin brings a combination
of cabaret, belting vocals, and no-holds- barred comedy to her live, raucous, genre-hopping musical performances. She previously made her Broadway debut in Tales of the City at The Music Box Theater. Some of her performances include appearing with Joan Rivers on Celebrity Apprentice and opening for Ms. Rivers’
live shows in New York. You can hear her belting out featured vocals on The Scissor Sisters’ single “Inevitable” (co-produced with Pharrell). She was a featured vocalist with comedian Sandra Bernhard at Town Hall in New York, and has twice been a featured guest on Ms. Bernhard’s Sirius XM radio show, Sandyland. She has performed her own solo shows in New York and New Orleans, as well as the
TBA Festival, Treefort Festival, Outsider Festival, Jazz and Blues Festival in Altomonte, Italy, and has recurring New York residencies at Alan Cumming’s Club Cumming, Joe’s Pub, and The Cutting Room. Ms. Martin continues to evolve as writer, curator, choreographer, and star
of her own performances, including The Days of My Lives and Three Women: Joplin, Midler, & Nyro (solo artist residency at Joe’s Pub), Hi! (“Best Solo Performance” Drammy Award), Wigshop, Stoned Soul:
In Love with Laura Nyro (residency
at Feinstein’s/54 Below), and Janis: Undead (a continuing US/international tour). She is also touring her original album, A.M. Gold, including two songs featured in John Cameron Mitchell’s recent film, How to Talk to Girls at Parties.

Justin Craig (music director, guitar) is
a Grammy-nominated record producer, composer, and New York-based musical director (Hedwig and the Angry Inch Broadway and first national tour). Having started his musical career in the pop/rock world, he spent years writing, recording, and touring with artists and bands all
over the world. After relocating to New York in 2011, he began orchestrating and performing in musical theater productions in addition to his studio work as producer and musician. Additionally, he has worked in film as a composer, score mixer, and performing multi-instrumentalist for films including How to Talk to Girls at Parties, The Nice Guys, Match, Admission, Lovelace, and Little Fockers.

Peter Yanowitz (drums) is a songwriter, librettist, and performer living in New York. He made his Broadway debut as Schlatko, the drummer in the Tony Award- winning Broadway musical Hedwig and the Angry Inch. Mr. Yanowitz was the original drummer of The Wallflowers, and for Natalie Merchant on her first three solo records Tigerlily, Ophelia, and Live

in Concert. He has also recorded
and performed with Yoko Ono, Allen Ginsberg, and Wilco. With Stephen
Trask, Mr. Yanowitz cowrote This Ain’t No Disco, a rock opera about Studio 54 and Mudd Club in 1979, which made its Off- Broadway debut in the summer of 2018
at the Atlantic Theater. He was also the bass player and main songwriter for the band Morningwood on Capitol Records. He currently plays in the band Princess Goes to the Butterfly Museum with Matt Katz Bohen and Michael C. Hall.

Matt Duncan (bass) has worked as a professional musician for over a decade in various capacities, most often as a bass player and a singer, songwriter, and producer. He played bass as Jacek in
the Broadway production of Hedwig and the Angry Inch, and continued that role during the national tour that followed.
Mr. Duncan’s solo albums are enjoyed
by hundreds of thousands of fans on streaming services every month, and he continues to play bass with major touring acts. Mr. Duncan got his start playing in punk, jazz, and folk bands in Lexington, Kentucky before moving to New York in 2014 to join the Hedwig cast. Although he frequently moonlights as a saxophonist and keyboard player, his love for the interplay of rhythm and melody always brings him back to the bass, his true instrumental love.

Erik Bergrin (costumes) is a costume designer and fiber artist based in
New York. His work has been featured
in galleries and museums such as Marlborough Contemporary, The State Historical Museum in Moscow, Envoy Enterprise Gallery, David Fierman Gallery, AC Institute, The Society of Arts and Crafts in Boston, New York’s Garment District, HERE Arts Center, and many more. He has designed costumes for John Cameron Mitchell’s Origin of Love Tour, Goodbar

at the Public Theater, and for musicians including Lady Gaga and Peaches. His costume designs have been featured
in TV shows such as America’s Next
Top Model and Make Me A Supermodel, and highlighted in films including Violet Tendencies. Mr. Bergrin’s creations have been in articles and publications including Dazed and Confused, Zink, New York Times, New York Magazine, Star, King Kong, Zoo, Dust, Bullett, and ODDA.

Dylan Goodhue (sound designer) is a front- of-house audio engineer and musician. He has worked with Grammy Award-winners Roomful of Teeth, Grupo Fantasma, Béla Fleck, and Willie Nelson. He has mixed at festivals including SXSW, Edinburgh Fringe Festival, Calgary Stampede, Herzberg, and Luminato. A native of Toronto, Mr. Goodhue is now living in Austin, Texas, where he plays guitar in a hip-hop cover band called Classic Hiphop Live, operates a farm in his backyard, teaches live audio, does yoga, and loves his cat Leonardo Trouserpants the Third.

Michael Zumbrun (video design) is a concert production and lighting specialist. He is currently part of the Metropolitan Museum of Art’s performance arm, MetLiveArts. Other notable clients and venues include Webster Hall, Skrillex, Erykah Badu, Alva Noto, and John Varvatos. He lives and works in New York City.

(producer) is a management and production company specializing in new work development and touring. Over the past 15 years ArKtype’s work has grown to encompass renowned artists from
30 different countries, multiple genres,

Share your footage and memories of tonight’s show and find the latest in exclusive merchandise at johncameronmitchell.com.

Must have a ticket to the Orchestre Métropolitain performance to attend.