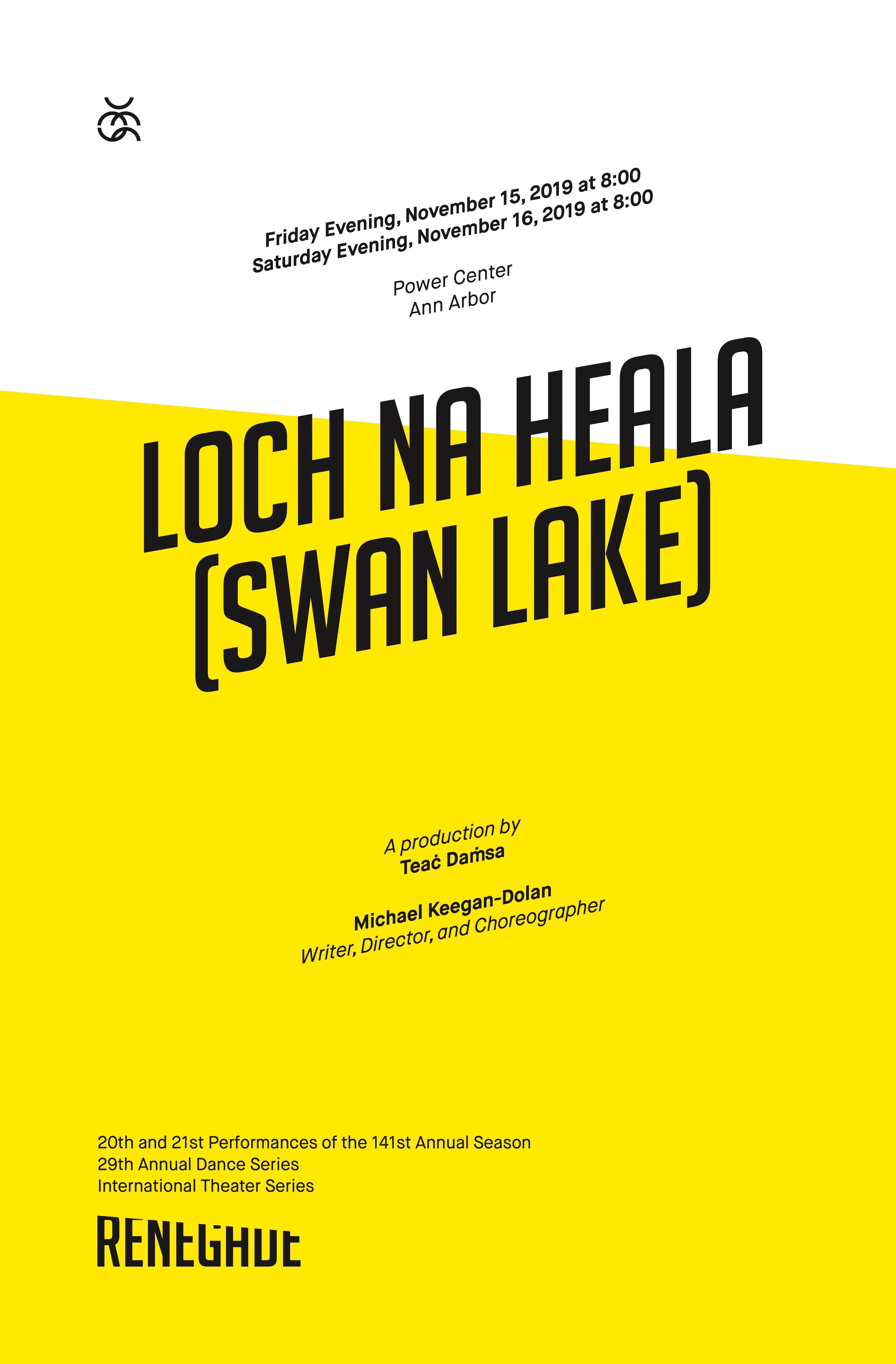 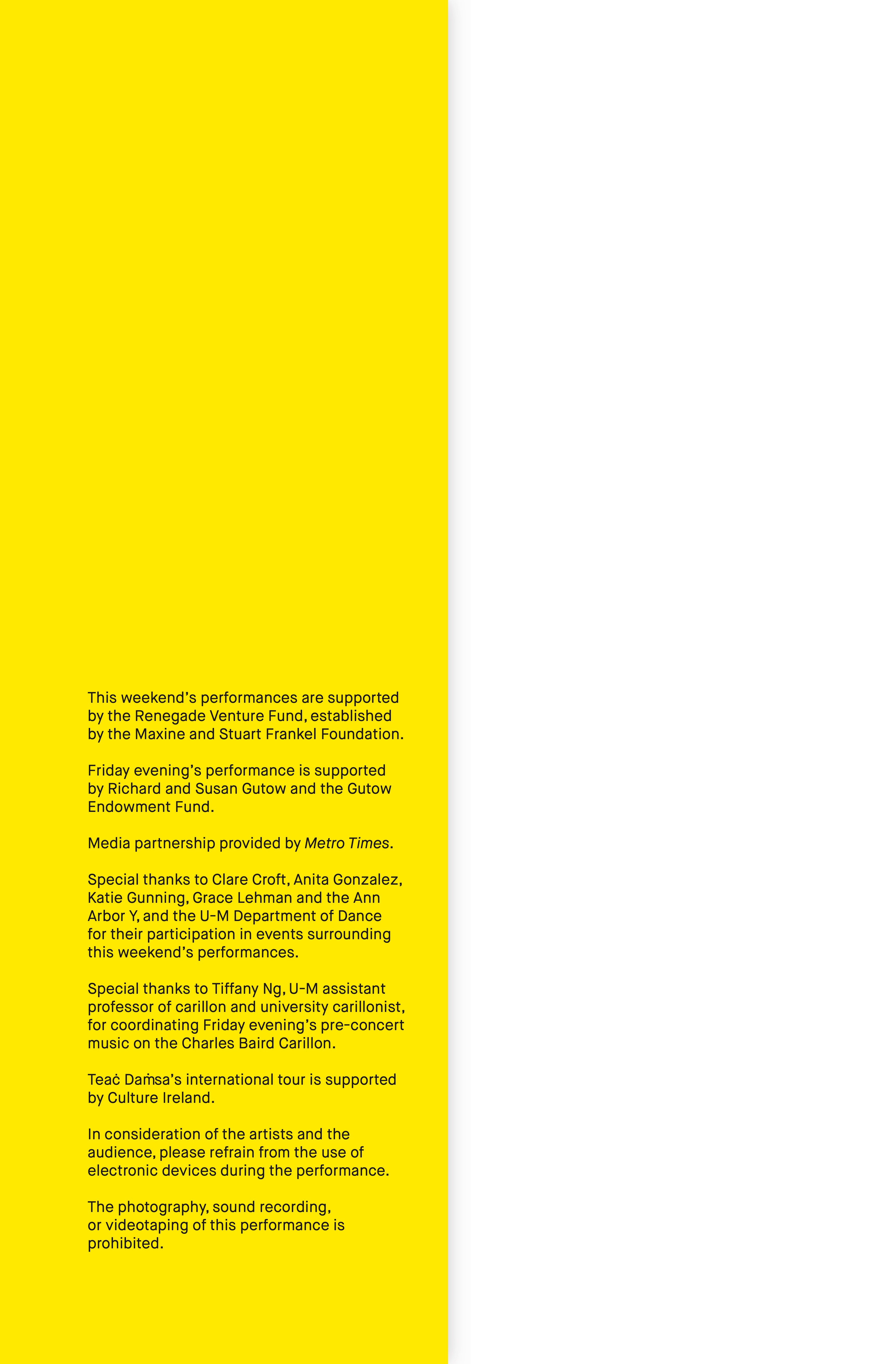 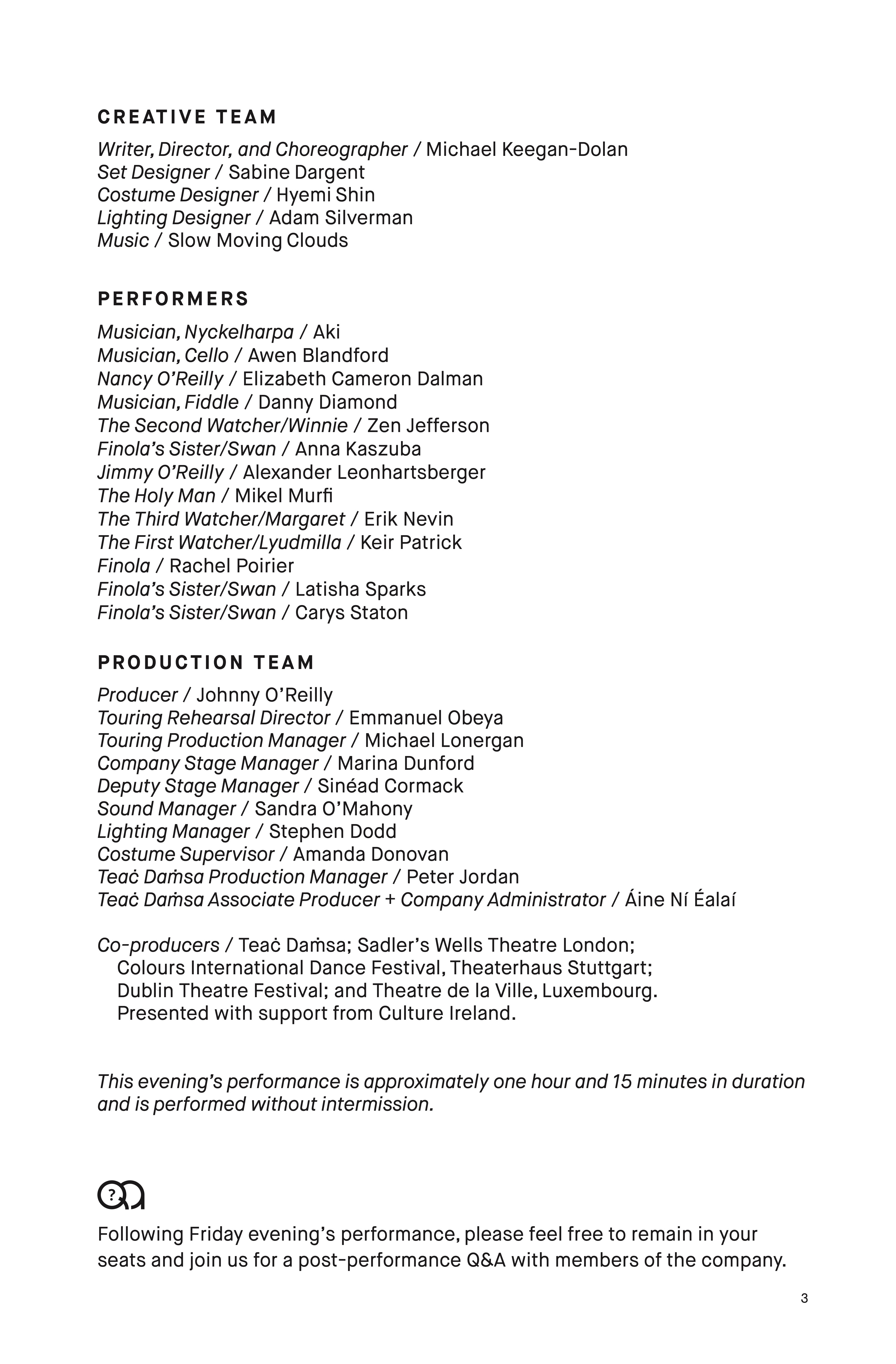 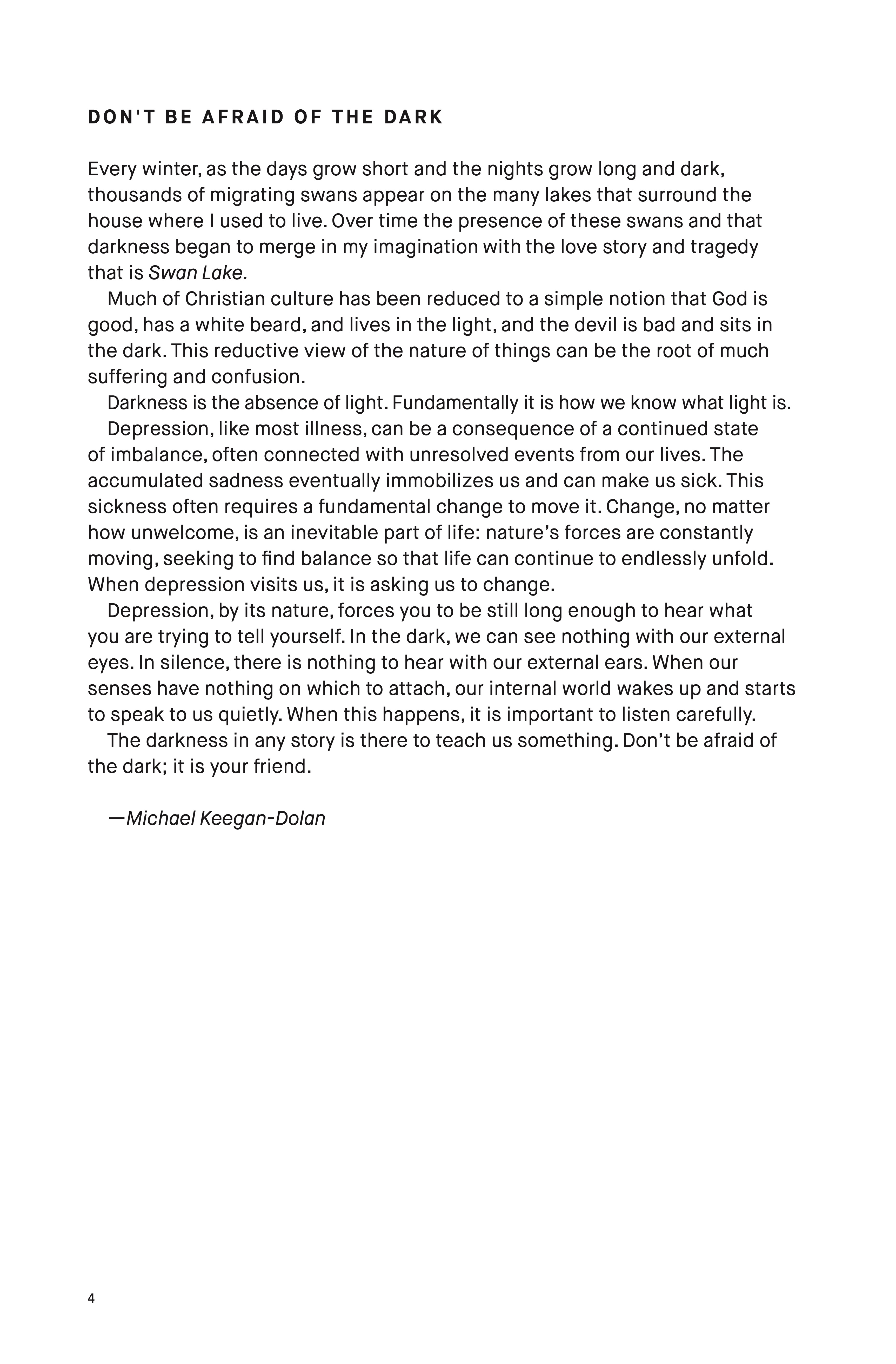 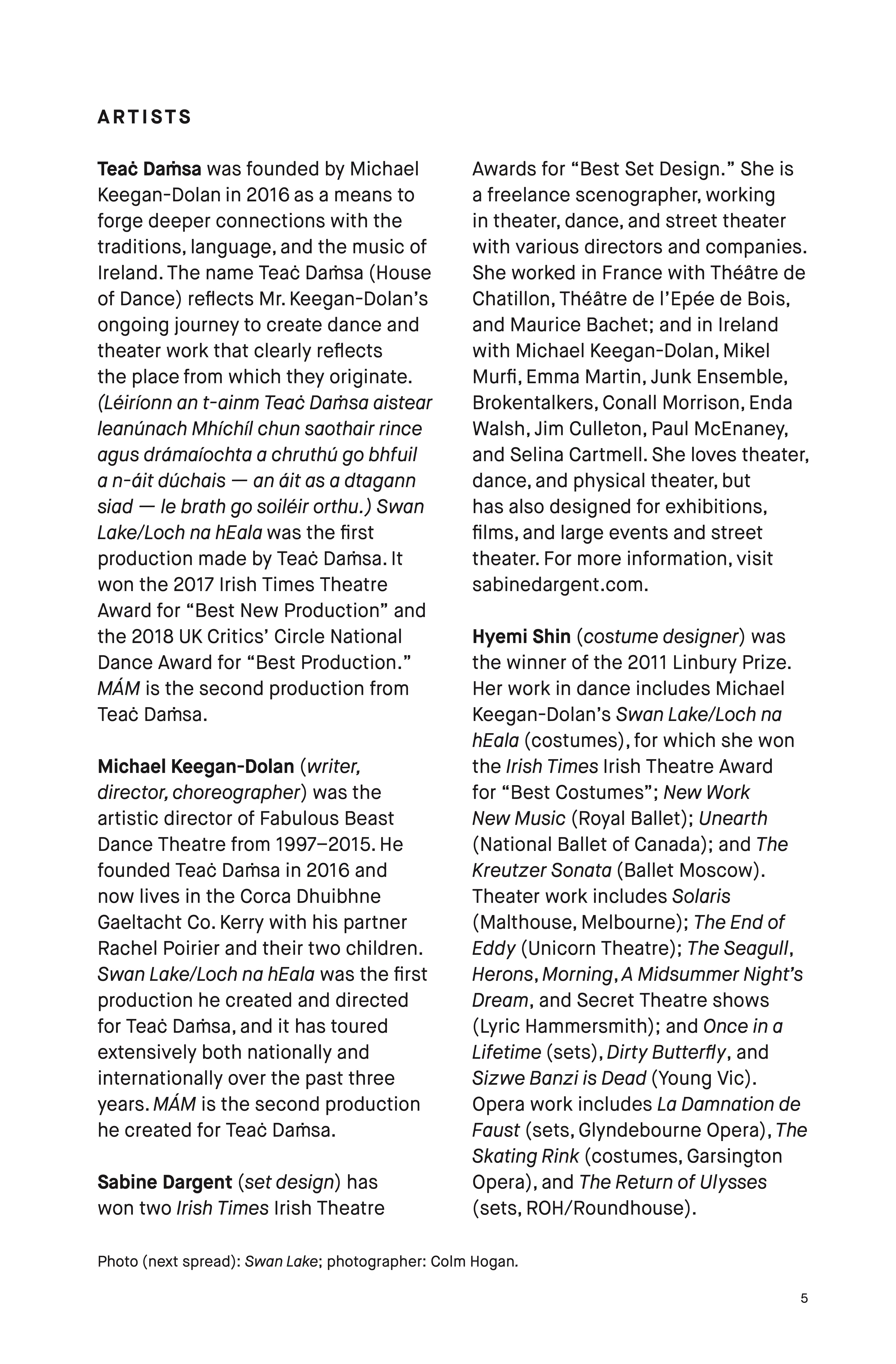 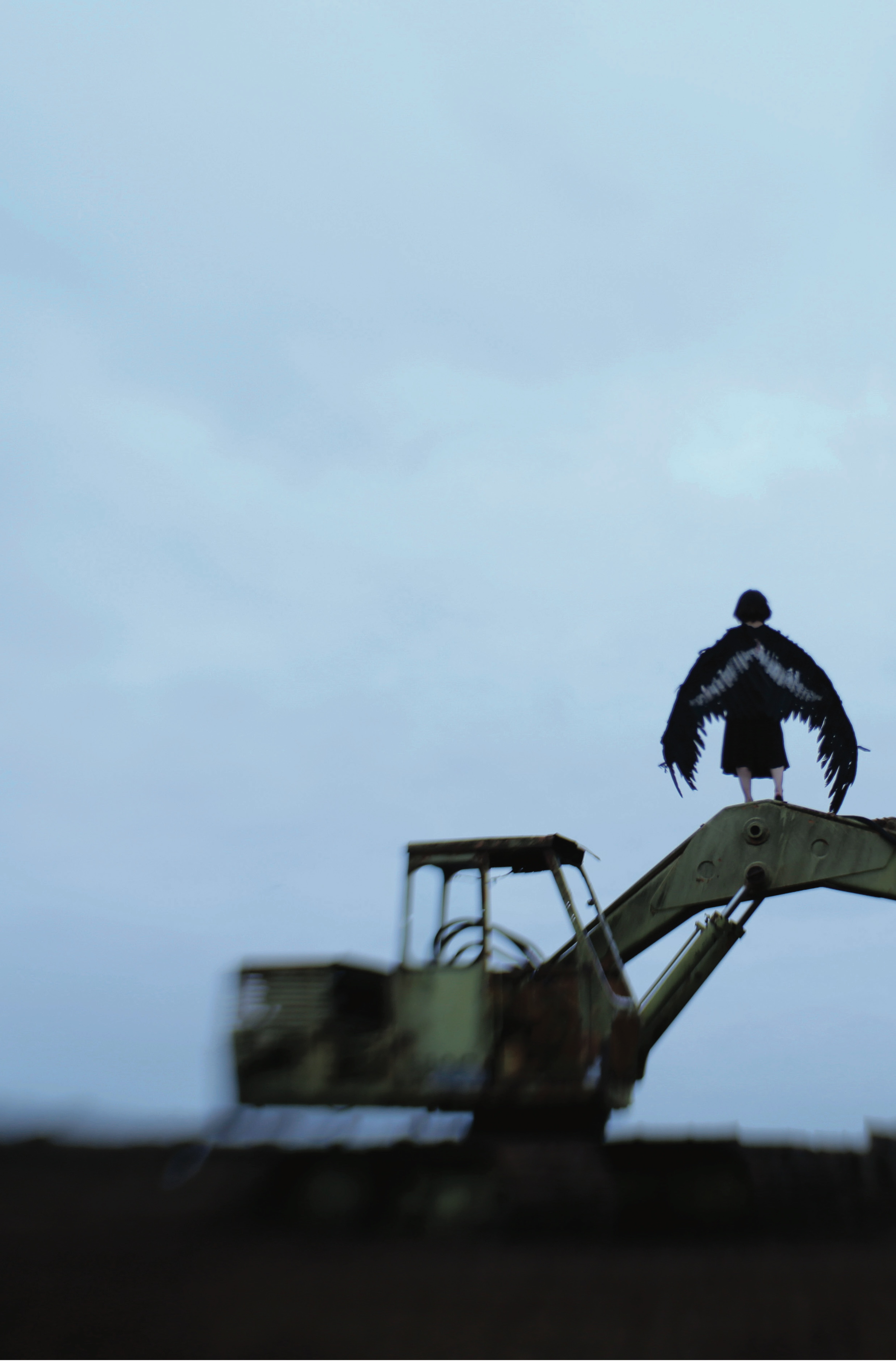 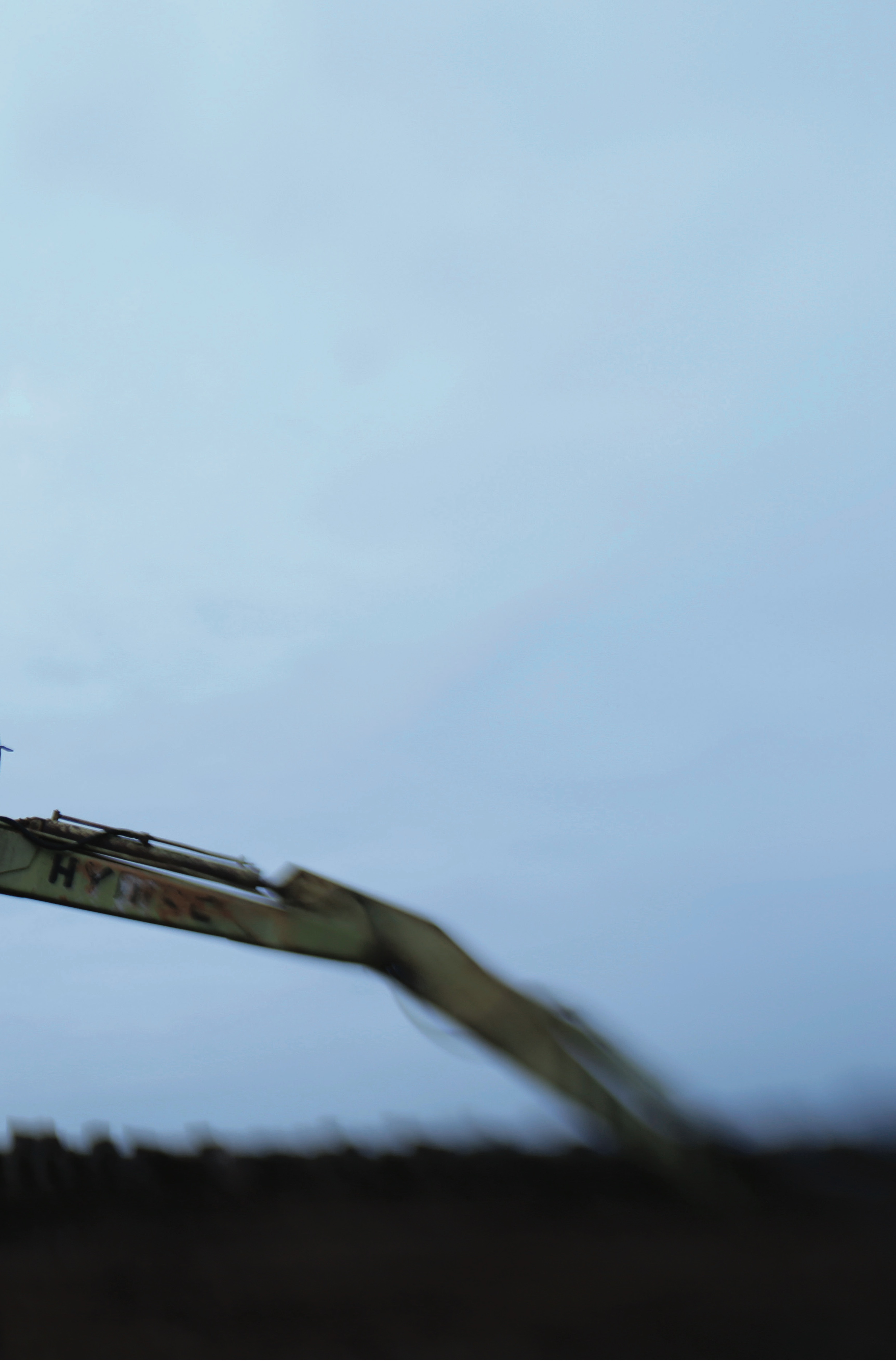 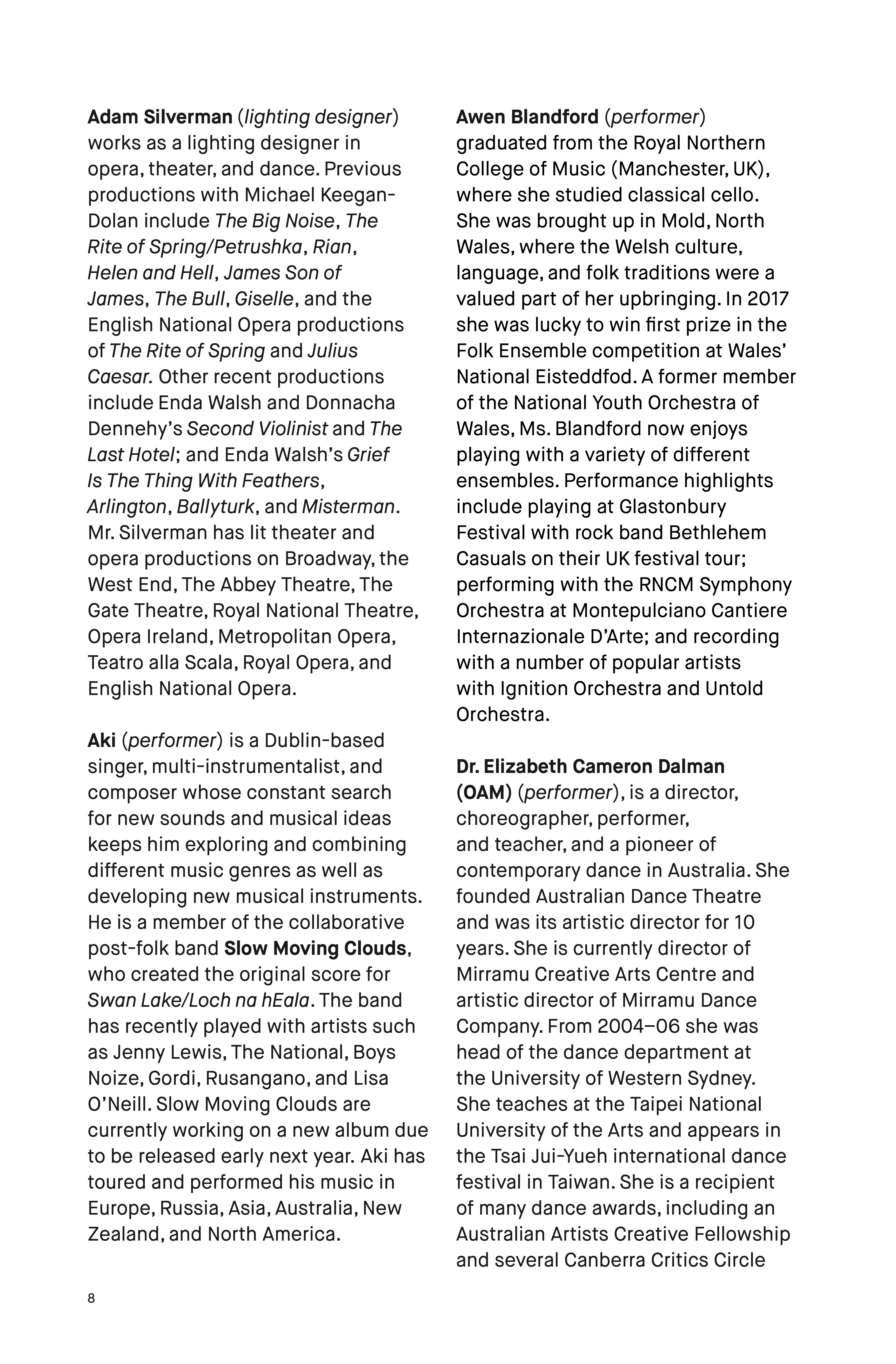 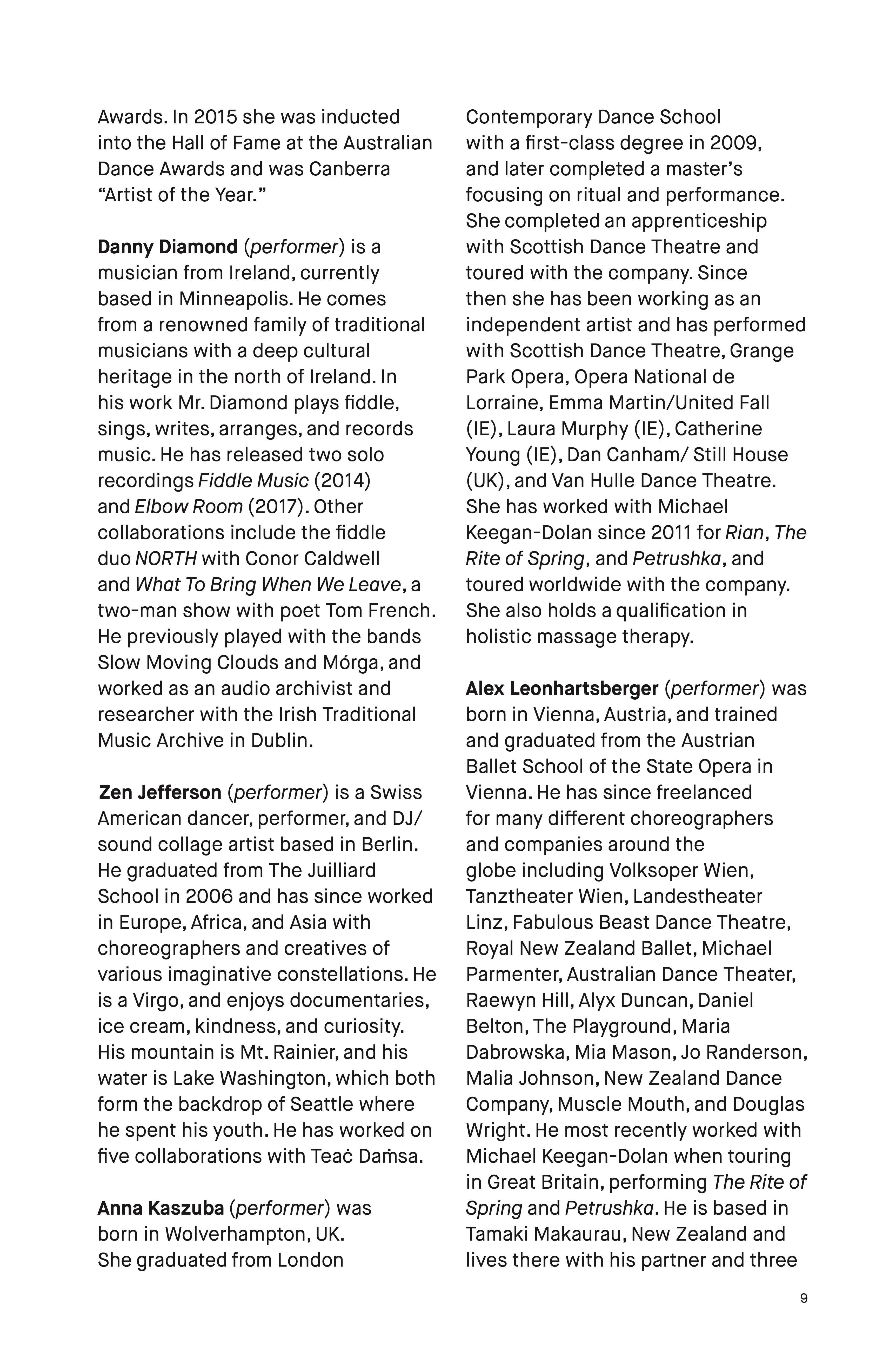 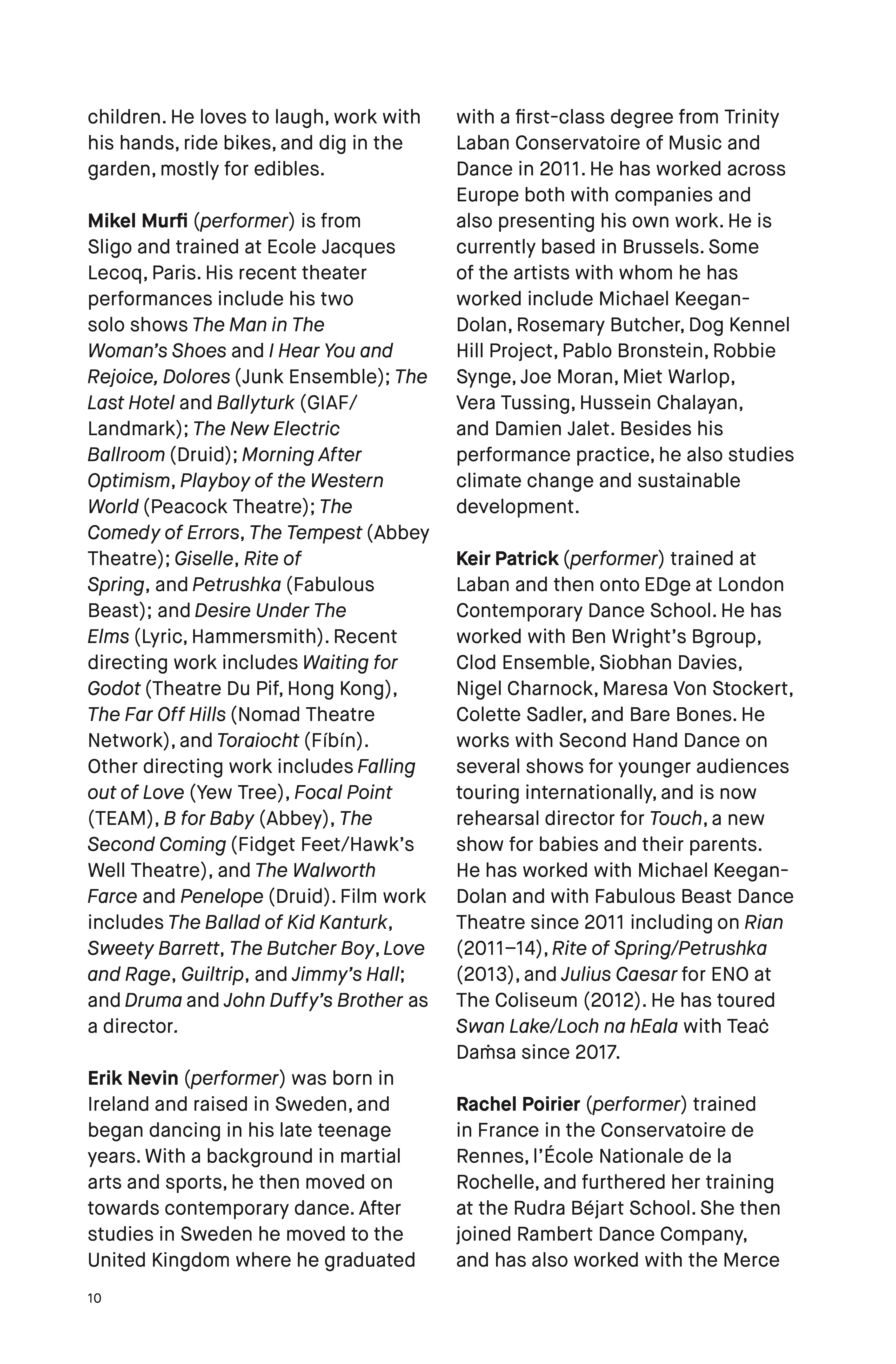 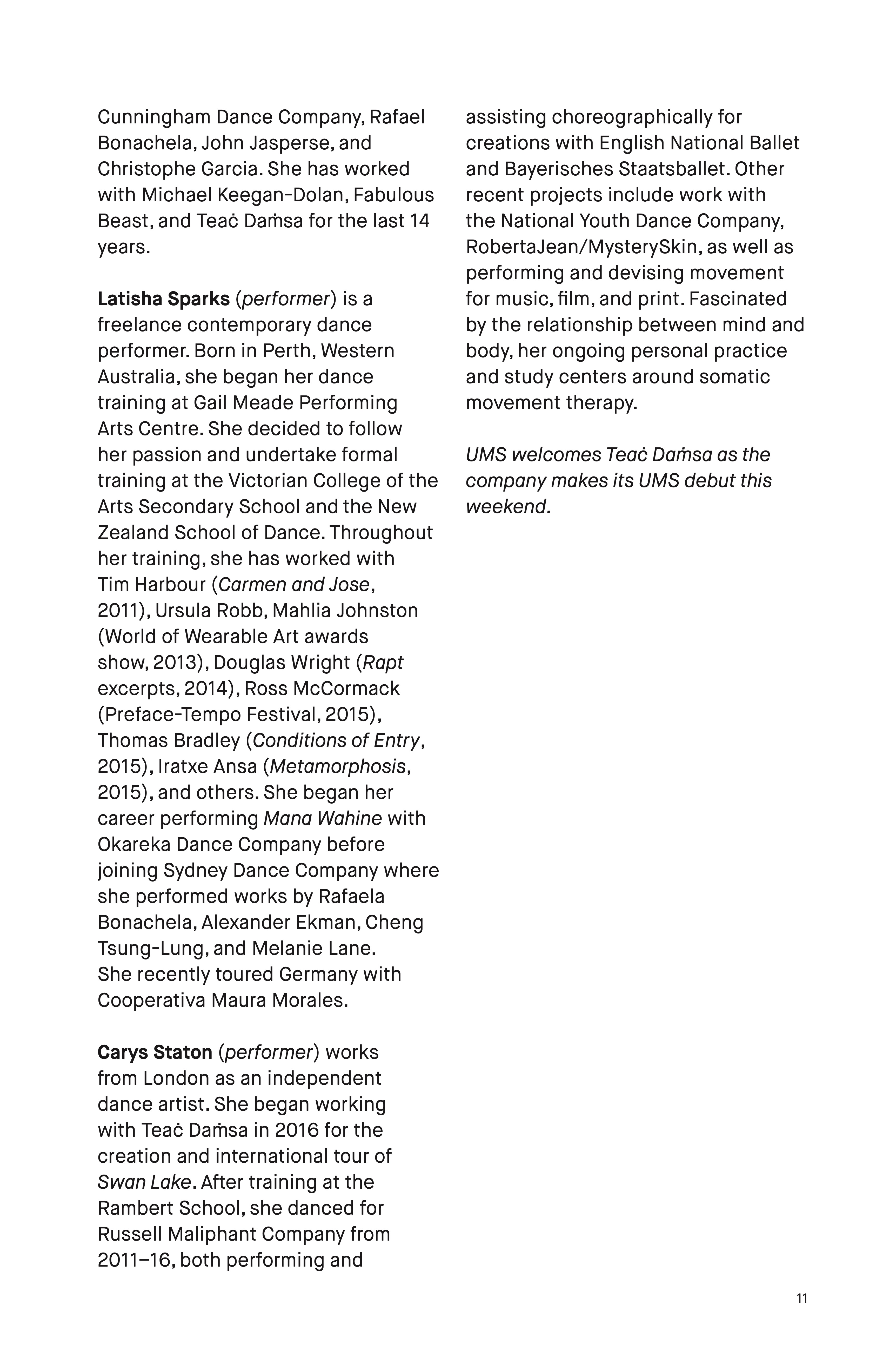 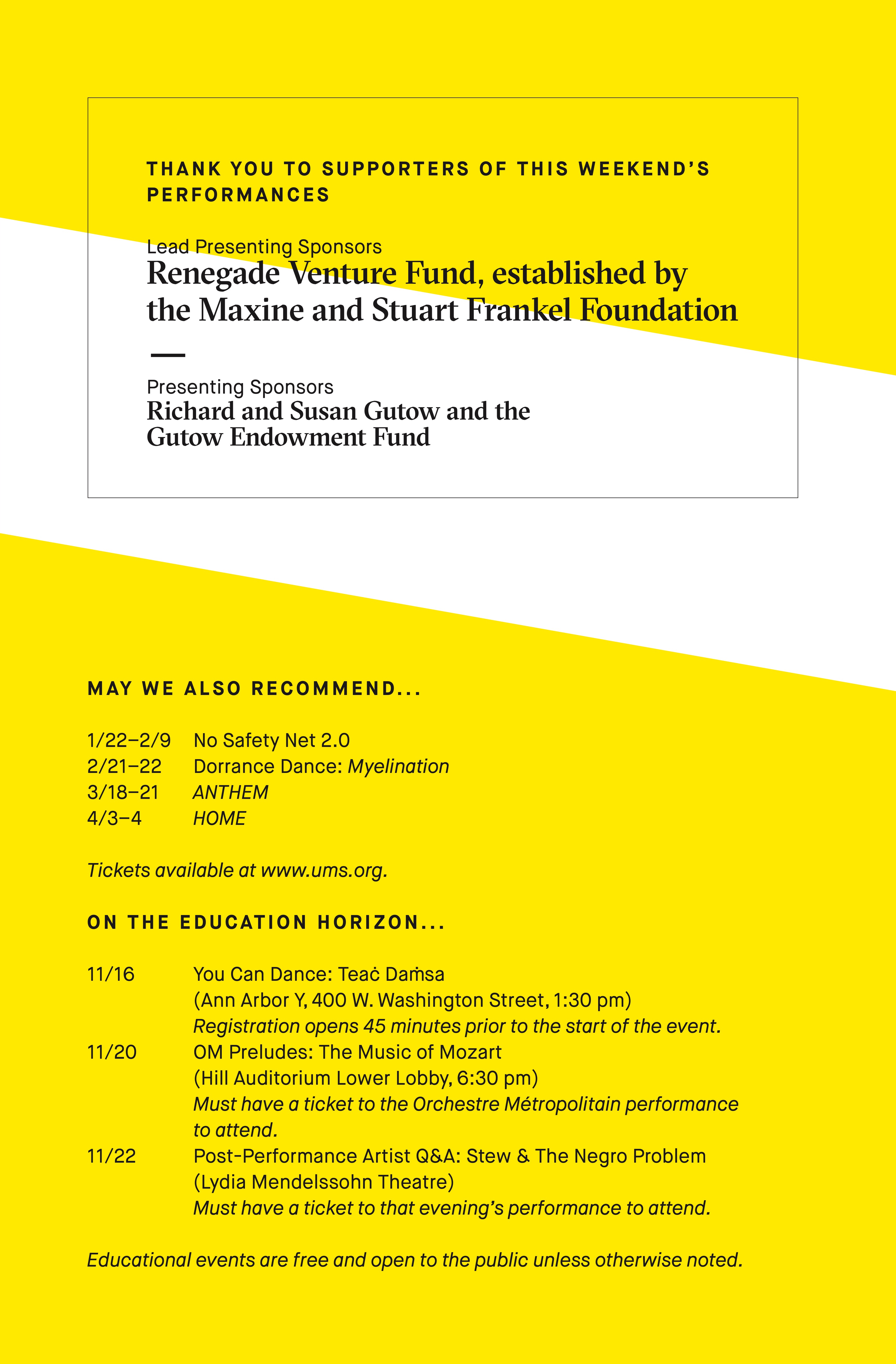 This weekend’s performances are supported by the Renegade Venture Fund, established by the Maxine and Stuart Frankel Foundation.

Friday evening’s performance is supported by Richard and Susan Gutow and the Gutow Endowment Fund.

Special thanks to Clare Croft, Anita Gonzalez, Katie Gunning, Grace Lehman and the Ann Arbor Y, and the U-M Department of Dance for their participation in events surrounding this weekend’s performances.

This evening’s performance is approximately one hour and 15 minutes in duration and is performed without intermission.

Following Friday evening’s performance, please feel free to remain in your seats and join us for a post-performance Q&A with members of the company.

DON'T BE AFRAID OF THE DARK

Every winter, as the days grow short and the nights grow long and dark, thousands of migrating swans appear on the many lakes that surround the house where I used to live. Over time the presence of these swans and that darkness began to merge in my imagination with the love story and tragedy that is Swan Lake.

Much of Christian culture has been reduced to a simple notion that God is good, has a white beard, and lives in the light, and the devil is bad and sits in the dark. This reductive view of the nature of things can be the root of much suffering and confusion.

Darkness is the absence of light. Fundamentally it is how we know what light is.

Depression, like most illness, can be a consequence of a continued state of imbalance, often connected with unresolved events from our lives. The accumulated sadness eventually immobilizes us and can make us sick. This sickness often requires a fundamental change to move it. Change, no matter how unwelcome, is an inevitable part of life: nature’s forces are constantly moving, seeking to find balance so that life can continue to endlessly unfold. When depression visits us, it is asking us to change.

Depression, by its nature, forces you to be still long enough to hear what
you are trying to tell yourself. In the dark, we can see nothing with our external eyes. In silence, there is nothing to hear with our external ears. When our senses have nothing on which to attach, our internal world wakes up and starts to speak to us quietly. When this happens, it is important to listen carefully.

The darkness in any story is there to teach us something. Don’t be afraid of the dark; it is your friend.

Teaċ Dam. sa was founded by Michael Keegan-Dolan in 2016 as a means to forge deeper connections with the traditions, language, and the music of Ireland. The name Teaċ Dam. sa (House of Dance) reflects Mr. Keegan-Dolan’s ongoing journey to create dance and theater work that clearly reflects

the place from which they originate.

Michael Keegan-Dolan (writer, director, choreographer) was the artistic director of Fabulous Beast Dance Theatre from 1997–2015. He founded Teaċ Dam. sa in 2016 and now lives in the Corca Dhuibhne Gaeltacht Co. Kerry with his partner Rachel Poirier and their two children. Swan Lake/Loch na hEala was the first production he created and directed for Teaċ Dam. sa, and it has toured extensively both nationally and internationally over the past three years. MÁM is the second production he created for Teaċ Dam. sa.

Adam Silverman (lighting designer) works as a lighting designer in opera, theater, and dance. Previous productions with Michael Keegan- Dolan include The Big Noise, The Rite of Spring/Petrushka, Rian,
Helen and Hell, James Son of
James, The Bull, Giselle, and the English National Opera productions of The Rite of Spring and Julius Caesar. Other recent productions include Enda Walsh and Donnacha Dennehy’s Second Violinist and The Last Hotel; and Enda Walsh’s Grief
Is The Thing With Feathers,
Arlington, Ballyturk, and Misterman. Mr. Silverman has lit theater and opera productions on Broadway, the West End, The Abbey Theatre, The Gate Theatre, Royal National Theatre, Opera Ireland, Metropolitan Opera, Teatro alla Scala, Royal Opera, and English National Opera.

Aki (performer) is a Dublin-based singer, multi-instrumentalist, and composer whose constant search
for new sounds and musical ideas keeps him exploring and combining different music genres as well as developing new musical instruments. He is a member of the collaborative post-folk band Slow Moving Clouds, who created the original score for Swan Lake/Loch na hEala. The band has recently played with artists such as Jenny Lewis, The National, Boys Noize, Gordi, Rusangano, and Lisa O’Neill. Slow Moving Clouds are currently working on a new album due to be released early next year. Aki has toured and performed his music in Europe, Russia, Asia, Australia, New Zealand, and North America.

Awen Blandford (performer) graduated from the Royal Northern College of Music (Manchester, UK), where she studied classical cello. She was brought up in Mold, North Wales, where the Welsh culture, language, and folk traditions were a valued part of her upbringing. In 2017 she was lucky to win first prize in theFolk Ensemble competition at Wales’ National Eisteddfod. A former member of the National Youth Orchestra of Wales, Ms. Blandford now enjoys playing with a variety of different ensembles. Performance highlights include playing at Glastonbury Festival with rock band Bethlehem Casuals on their UK festival tour; performing with the RNCM Symphony Orchestra at Montepulciano Cantiere Internazionale D’Arte; and recording with a number of popular artists
with Ignition Orchestra and Untold Orchestra.

Dr. Elizabeth Cameron Dalman
(OAM) (performer), is a director, choreographer, performer,
and teacher, and a pioneer of contemporary dance in Australia. She founded Australian Dance Theatre and was its artistic director for 10 years. She is currently director of Mirramu Creative Arts Centre and artistic director of Mirramu Dance Company. From 2004–06 she was head of the dance department at

the University of Western Sydney. She teaches at the Taipei National University of the Arts and appears in the Tsai Jui-Yueh international dance festival in Taiwan. She is a recipient of many dance awards, including an Australian Artists Creative Fellowship and several Canberra Critics Circle

Awards. In 2015 she was inducted into the Hall of Fame at the Australian Dance Awards and was Canberra “Artist of the Year.”

Danny Diamond (performer) is a musician from Ireland, currently based in Minneapolis. He comes from a renowned family of traditional musicians with a deep cultural heritage in the north of Ireland. In his work Mr. Diamond plays fiddle, sings, writes, arranges, and records music. He has released two solo recordings Fiddle Music (2014)

and Elbow Room (2017). Other collaborations include the fiddle
duo NORTH with Conor Caldwell
and What To Bring When We Leave, a two-man show with poet Tom French. He previously played with the bands Slow Moving Clouds and Mórga, and worked as an audio archivist and researcher with the Irish Traditional Music Archive in Dublin.

Zen Jefferson (performer) is a Swiss American dancer, performer, and DJ/ sound collage artist based in Berlin. He graduated from The Juilliard School in 2006 and has since worked in Europe, Africa, and Asia with choreographers and creatives of various imaginative constellations. He is a Virgo, and enjoys documentaries, ice cream, kindness, and curiosity. His mountain is Mt. Rainier, and his water is Lake Washington, which both form the backdrop of Seattle where he spent his youth. He has worked on five collaborations with Teaċ Dam. sa.

Anna Kaszuba (performer) was born in Wolverhampton, UK. She graduated from London

Contemporary Dance School
with a first-class degree in 2009,
and later completed a master’s focusing on ritual and performance. She completed an apprenticeship with Scottish Dance Theatre and toured with the company. Since
then she has been working as an independent artist and has performed with Scottish Dance Theatre, Grange Park Opera, Opera National de Lorraine, Emma Martin/United Fall (IE), Laura Murphy (IE), Catherine Young (IE), Dan Canham/ Still House (UK), and Van Hulle Dance Theatre. She has worked with Michael Keegan-Dolan since 2011 for Rian, The Rite of Spring, and Petrushka, and toured worldwide with the company. She also holds a qualification inholistic massage therapy.

Alex Leonhartsberger (performer) was born in Vienna, Austria, and trained and graduated from the Austrian Ballet School of the State Opera in Vienna. He has since freelanced

children. He loves to laugh, work with his hands, ride bikes, and dig in the garden, mostly for edibles.

with a first-class degree from Trinity Laban Conservatoire of Music and Dance in 2011. He has worked across Europe both with companies and also presenting his own work. He is currently based in Brussels. Some

Keir Patrick (performer) trained at Laban and then onto EDge at London Contemporary Dance School. He has worked with Ben Wright’s Bgroup, Clod Ensemble, Siobhan Davies, Nigel Charnock, Maresa Von Stockert, Colette Sadler, and Bare Bones. He works with Second Hand Dance on several shows for younger audiences touring internationally, and is now rehearsal director for Touch, a new show for babies and their parents.

Rachel Poirier (performer) trained
in France in the Conservatoire de Rennes, l’École Nationale de la Rochelle, and furthered her training at the Rudra Béjart School. She then joined Rambert Dance Company, and has also worked with the Merce

Mikel Murfi (performer) is from
Sligo and trained at Ecole Jacques Lecoq, Paris. His recent theater performances include his two
solo shows The Man in The
Woman’s Shoes and I Hear You and Rejoice, Dolores (Junk Ensemble); The Last Hotel and Ballyturk (GIAF/ Landmark); The New Electric
Ballroom (Druid); Morning After Optimism, Playboy of the Western World (Peacock Theatre); The Comedy of Errors, The Tempest (Abbey Theatre); Giselle, Rite of
Spring, and Petrushka (Fabulous Beast); and Desire Under The
Elms (Lyric, Hammersmith). Recent directing work includes Waiting for Godot (Theatre Du Pif, Hong Kong), The Far Off Hills (Nomad Theatre Network), and Toraiocht (Fíbín).
Other directing work includes Falling out of Love (Yew Tree), Focal Point (TEAM), B for Baby (Abbey), The Second Coming (Fidget Feet/Hawk’s Well Theatre), and The Walworth Farce and Penelope (Druid). Film work includes The Ballad of Kid Kanturk, Sweety Barrett, The Butcher Boy, Love and Rage, Guiltrip, and Jimmy’s Hall; and Druma and John Duffy’s Brother as a director.

Erik Nevin (performer) was born in Ireland and raised in Sweden, and began dancing in his late teenage years. With a background in martial arts and sports, he then moved on towards contemporary dance. After studies in Sweden he moved to the United Kingdom where he graduated

assisting choreographically for creations with English National Ballet and Bayerisches Staatsballet. Other recent projects include work with
the National Youth Dance Company, RobertaJean/MysterySkin, as well as performing and devising movement for music, film, and print. Fascinated by the relationship between mind and body, her ongoing personal practice and study centers around somatic movement therapy.

Latisha Sparks (performer) is a freelance contemporary dance performer. Born in Perth, Western Australia, she began her dance training at Gail Meade Performing Arts Centre. She decided to follow
her passion and undertake formal training at the Victorian College of the Arts Secondary School and the New Zealand School of Dance. Throughout her training, she has worked with

Carys Staton (performer) works from London as an independent dance artist. She began working with Teaċ Dam. sa in 2016 for the creation and international tour of Swan Lake. After training at the Rambert School, she danced for Russell Maliphant Company from 2011–16, both performing and

Richard and Susan Gutow and the Gutow Endowment Fund

Must have a ticket to the Orchestre Métropolitain performance