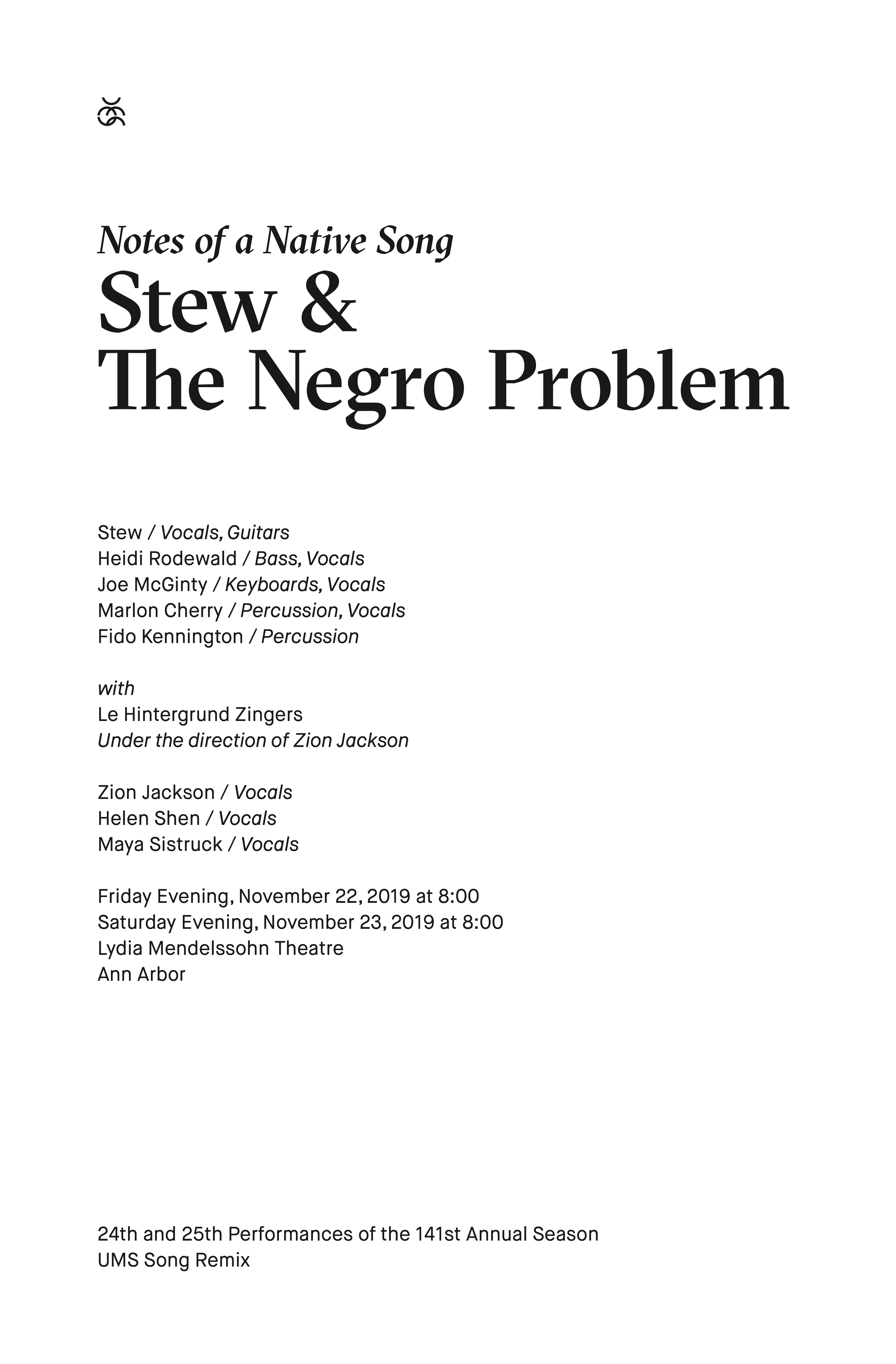 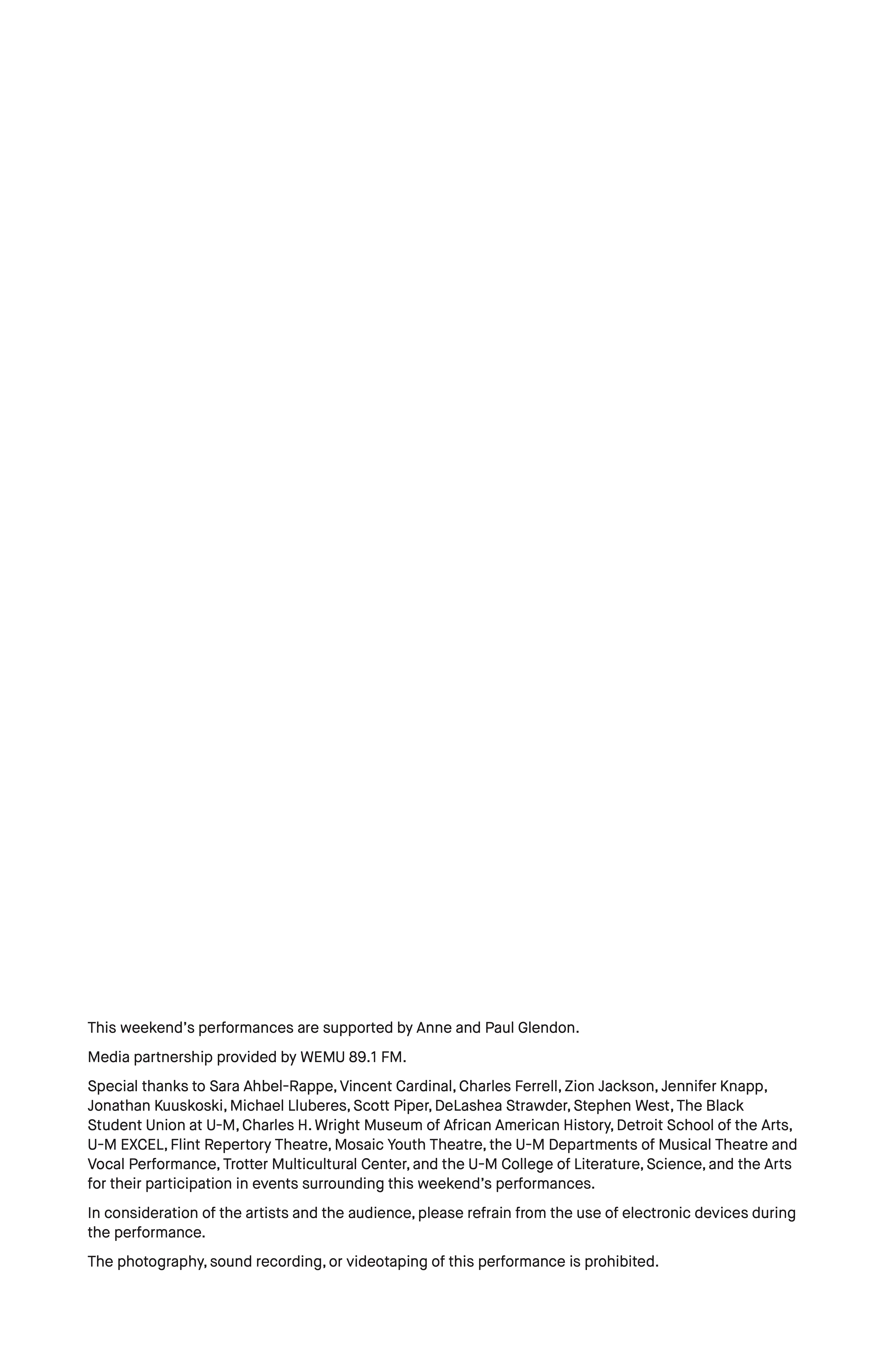 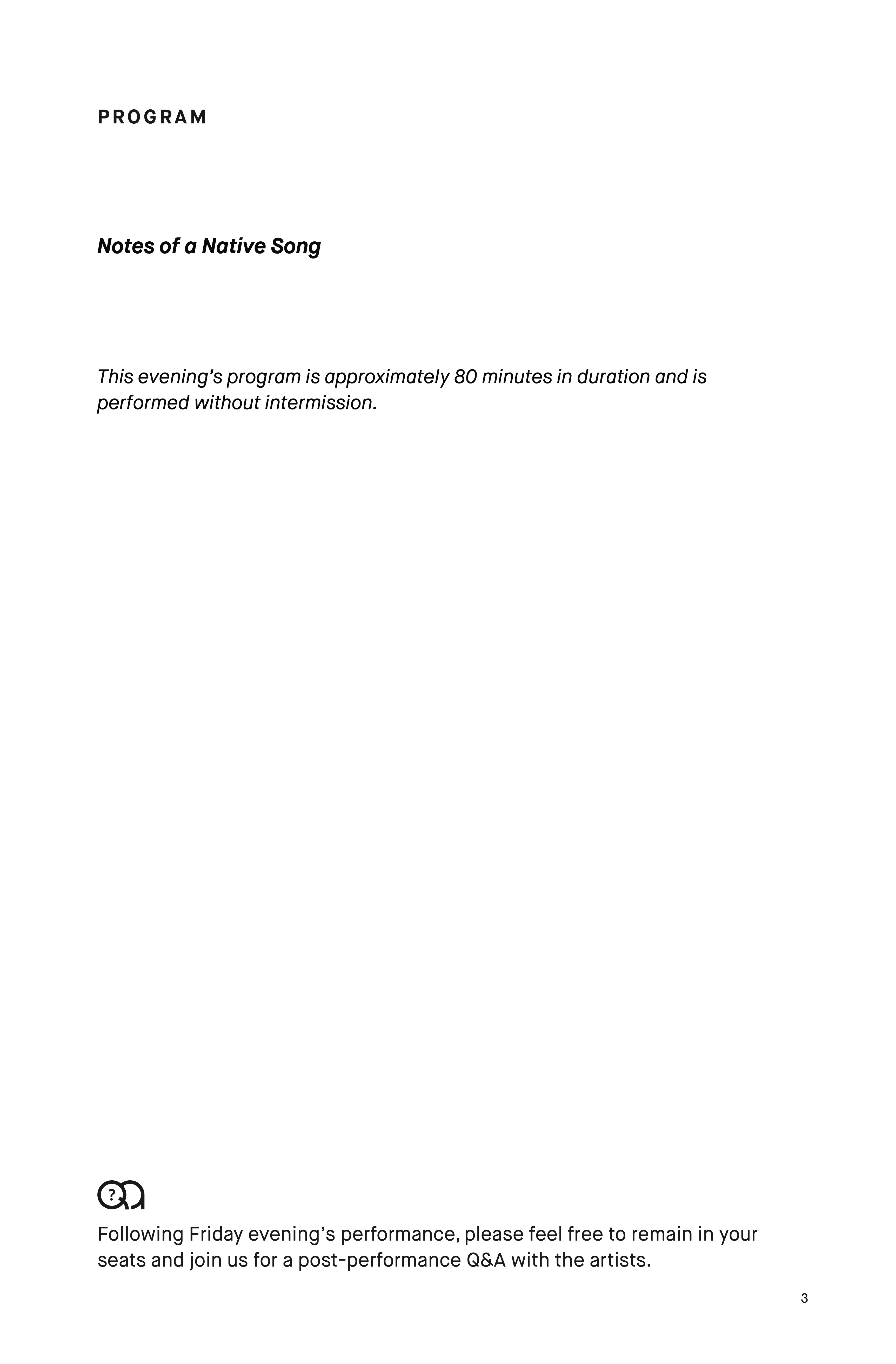 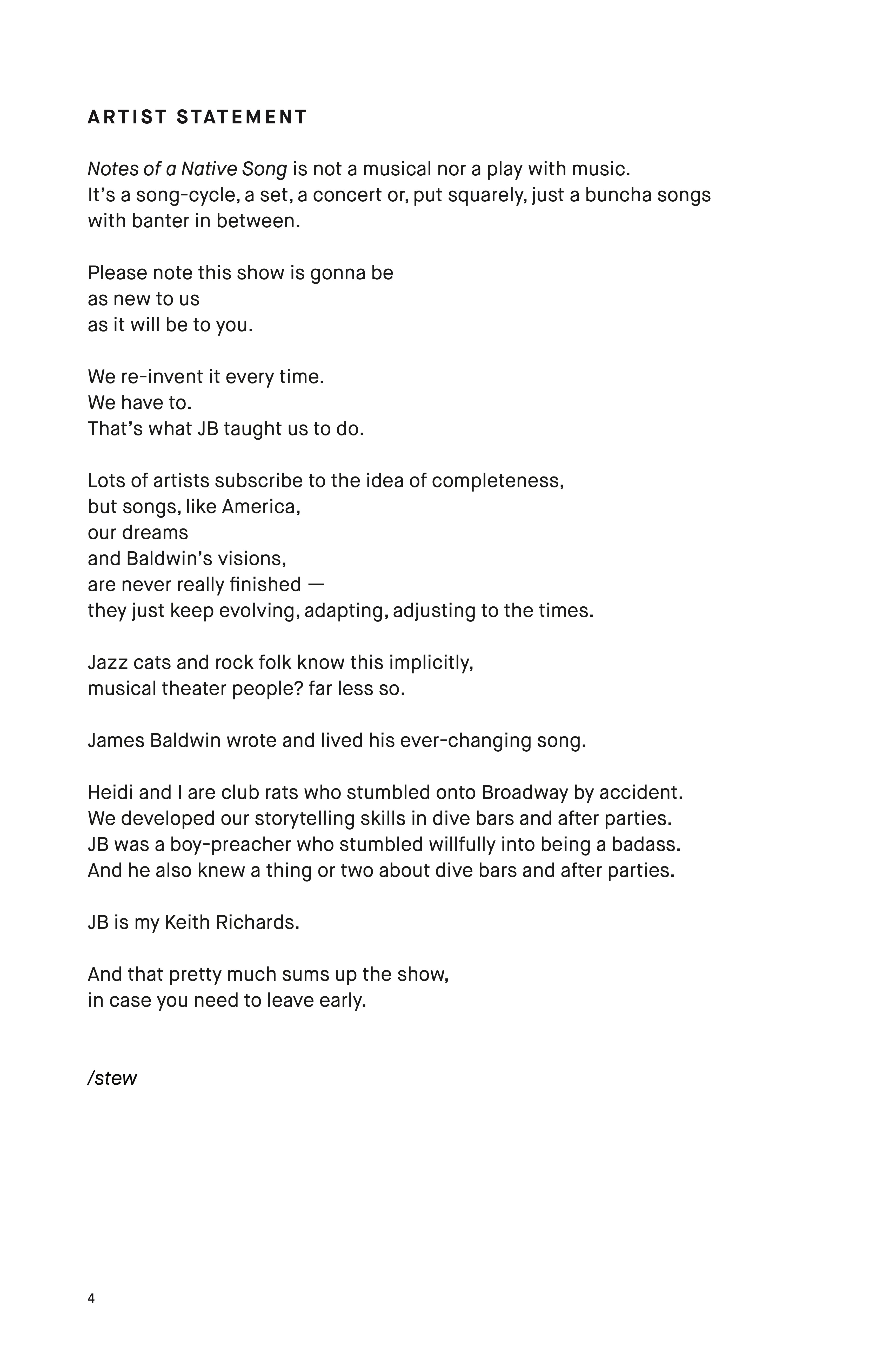 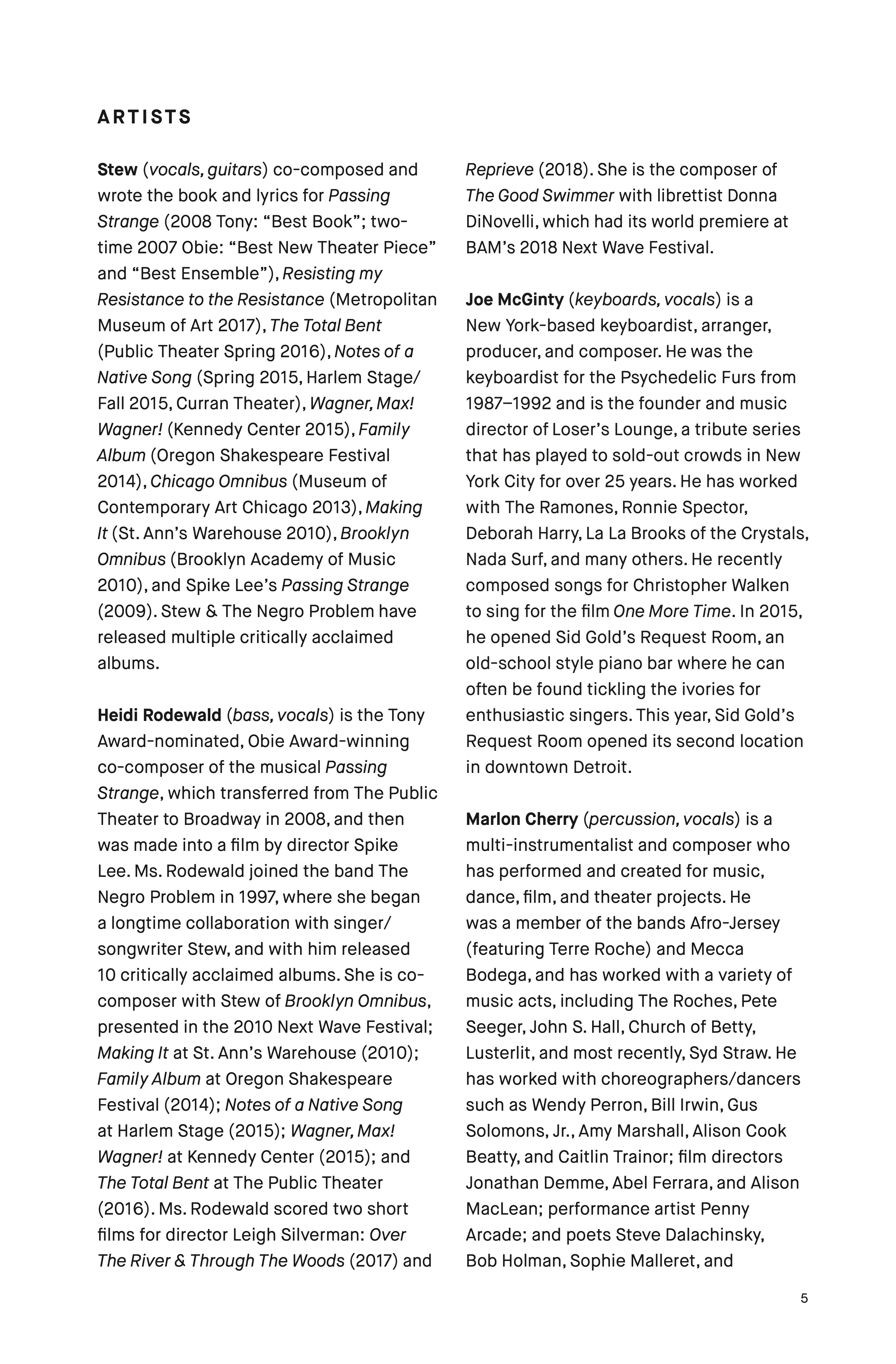 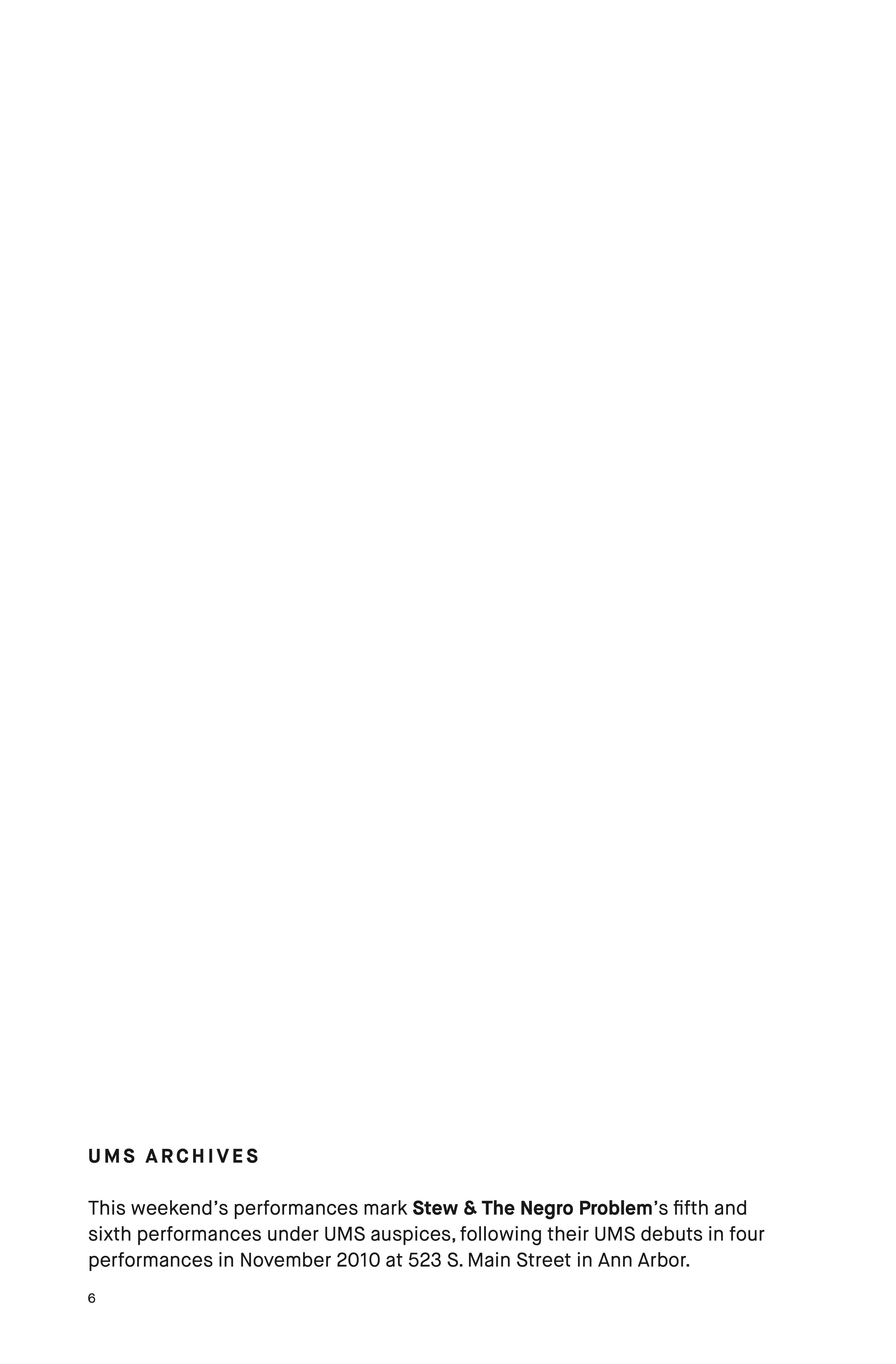 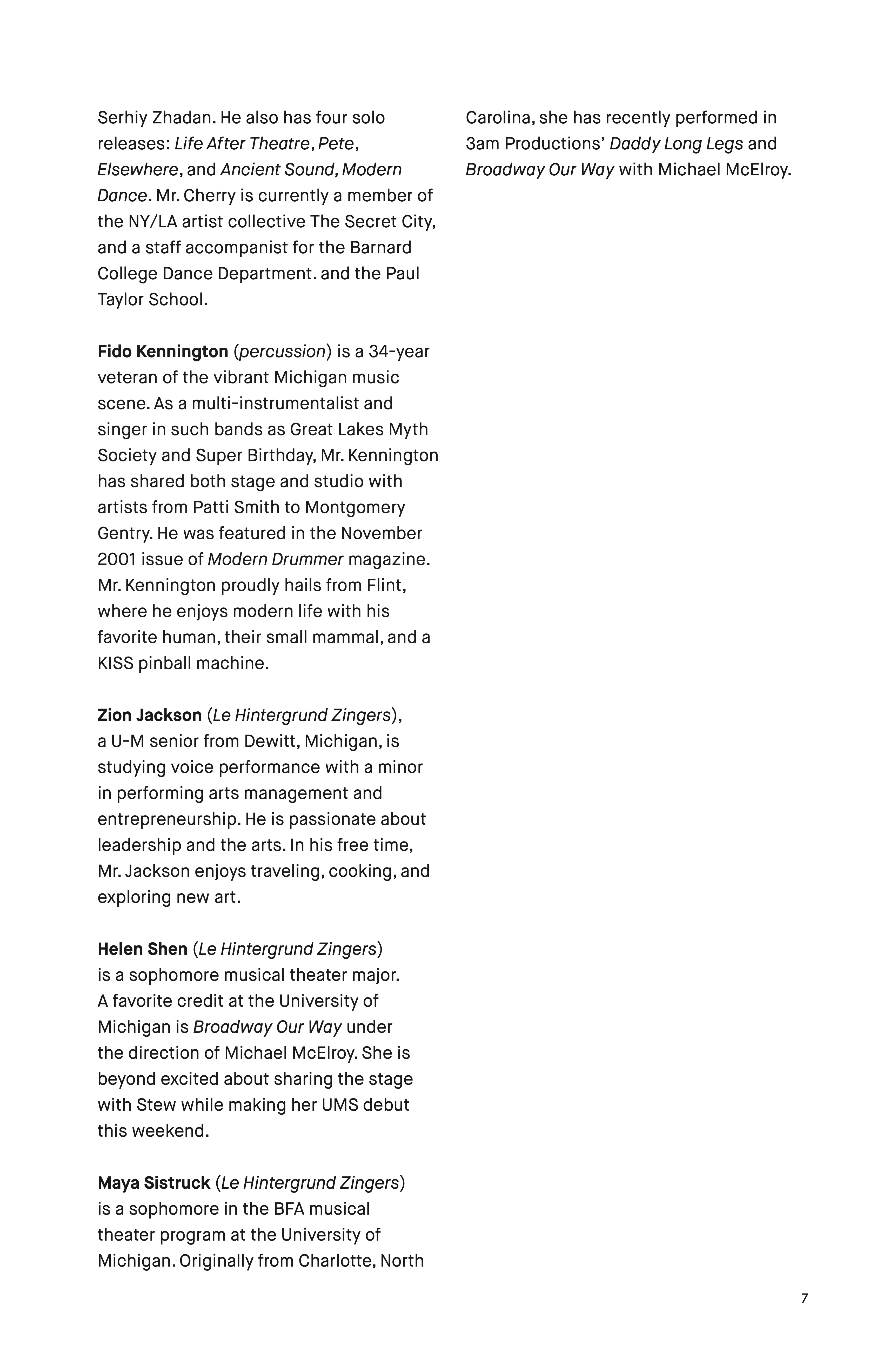 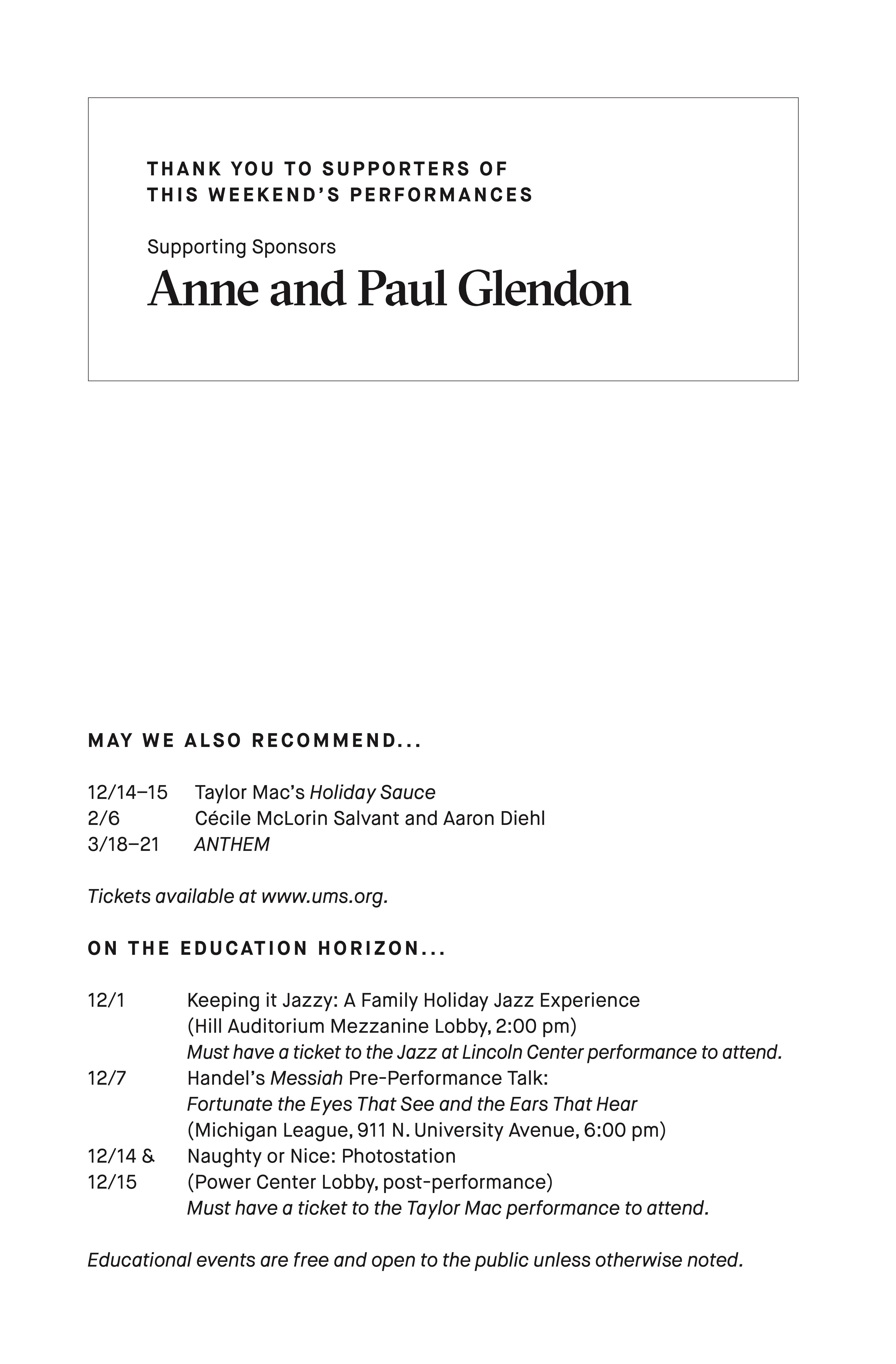 Notes of a Native Song

Under the direction of Zion Jackson

This weekend’s performances are supported by Anne and Paul Glendon. Media partnership provided by WEMU 89.1 FM.

Notes of a Native Song

This evening’s program is approximately 80 minutes in duration and is performed without intermission.

Following Friday evening’s performance, please feel free to remain in your seats and join us for a post-performance Q&A with the artists.

Notes of a Native Song is not a musical nor a play with music.
It’s a song-cycle, a set, a concert or, put squarely, just a buncha songs with banter in between.

Please note this show is gonna be as new to us
as it will be to you.

We re-invent it every time.
We have to.
That’s what JB taught us to do.

Lots of artists subscribe to the idea of completeness, but songs, like America,
our dreams
and Baldwin’s visions,

are never really finished —
they just keep evolving, adapting, adjusting to the times.

JB is my Keith Richards.

And that pretty much sums up the show, in case you need to leave early.

Heidi Rodewald (bass, vocals) is the Tony Award-nominated, Obie Award-winning co-composer of the musical Passing Strange, which transferred from The Public Theater to Broadway in 2008, and then was made into a film by director Spike

Lee. Ms. Rodewald joined the band The Negro Problem in 1997, where she began a longtime collaboration with singer/ songwriter Stew, and with him released 10 critically acclaimed albums. She is co- composer with Stew of Brooklyn Omnibus, presented in the 2010 Next Wave Festival; Making It at St. Ann’s Warehouse (2010); Family Album at Oregon Shakespeare Festival (2014); Notes of a Native Song

Reprieve (2018). She is the composer of The Good Swimmer with librettist Donna DiNovelli, which had its world premiere at BAM’s 2018 Next Wave Festival.

Joe McGinty (keyboards, vocals) is a
New York-based keyboardist, arranger, producer, and composer. He was the keyboardist for the Psychedelic Furs from 1987–1992 and is the founder and music director of Loser’s Lounge, a tribute series that has played to sold-out crowds in New York City for over 25 years. He has worked with The Ramones, Ronnie Spector, Deborah Harry, La La Brooks of the Crystals, Nada Surf, and many others. He recently composed songs for Christopher Walken to sing for the film One More Time. In 2015, he opened Sid Gold’s Request Room, an old-school style piano bar where he can often be found tickling the ivories for enthusiastic singers. This year, Sid Gold’s Request Room opened its second location in downtown Detroit.

Marlon Cherry (percussion, vocals) is a multi-instrumentalist and composer who has performed and created for music, dance, film, and theater projects. He

Serhiy Zhadan. He also has four solo releases: Life After Theatre, Pete, Elsewhere, and Ancient Sound, Modern Dance. Mr. Cherry is currently a member of the NY/LA artist collective The Secret City, and a staff accompanist for the Barnard College Dance Department. and the Paul Taylor School.

Fido Kennington (percussion) is a 34-year veteran of the vibrant Michigan music scene. As a multi-instrumentalist and singer in such bands as Great Lakes Myth Society and Super Birthday, Mr. Kennington has shared both stage and studio with artists from Patti Smith to Montgomery Gentry. He was featured in the November 2001 issue of Modern Drummer magazine. Mr. Kennington proudly hails from Flint, where he enjoys modern life with his favorite human, their small mammal, and a KISS pinball machine.

Zion Jackson (Le Hintergrund Zingers),
a U-M senior from Dewitt, Michigan, is studying voice performance with a minor in performing arts management and entrepreneurship. He is passionate about leadership and the arts. In his free time, Mr. Jackson enjoys traveling, cooking, and exploring new art.

Helen Shen (Le Hintergrund Zingers)
is a sophomore musical theater major. A favorite credit at the University of Michigan is Broadway Our Way under the direction of Michael McElroy. She is beyond excited about sharing the stage with Stew while making her UMS debut this weekend.

Maya Sistruck (Le Hintergrund Zingers)
is a sophomore in the BFA musical theater program at the University of Michigan. Originally from Charlotte, North

Carolina, she has recently performed in 3am Productions’ Daddy Long Legs and Broadway Our Way with Michael McElroy.

Keeping it Jazzy: A Family Holiday Jazz Experience
(Hill Auditorium Mezzanine Lobby, 2:00 pm)
Must have a ticket to the Jazz at Lincoln Center performance to attend. Handel’s Messiah Pre-Performance Talk:
Fortunate the Eyes That See and the Ears That Hear
(Michigan League, 911 N. University Avenue, 6:00 pm)
Naughty or Nice: Photostation
(Power Center Lobby, post-performance)
Must have a ticket to the Taylor Mac performance to attend.