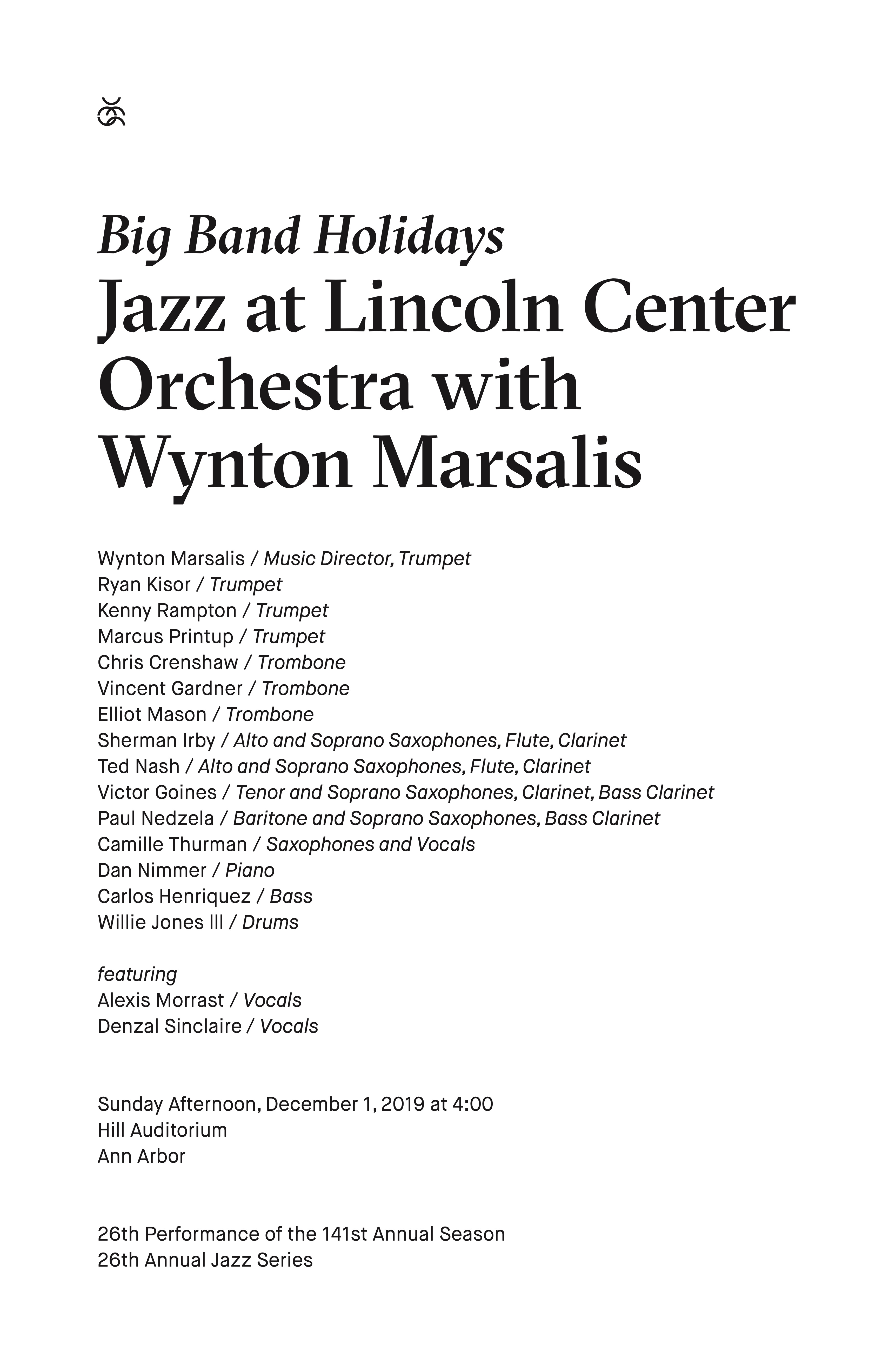 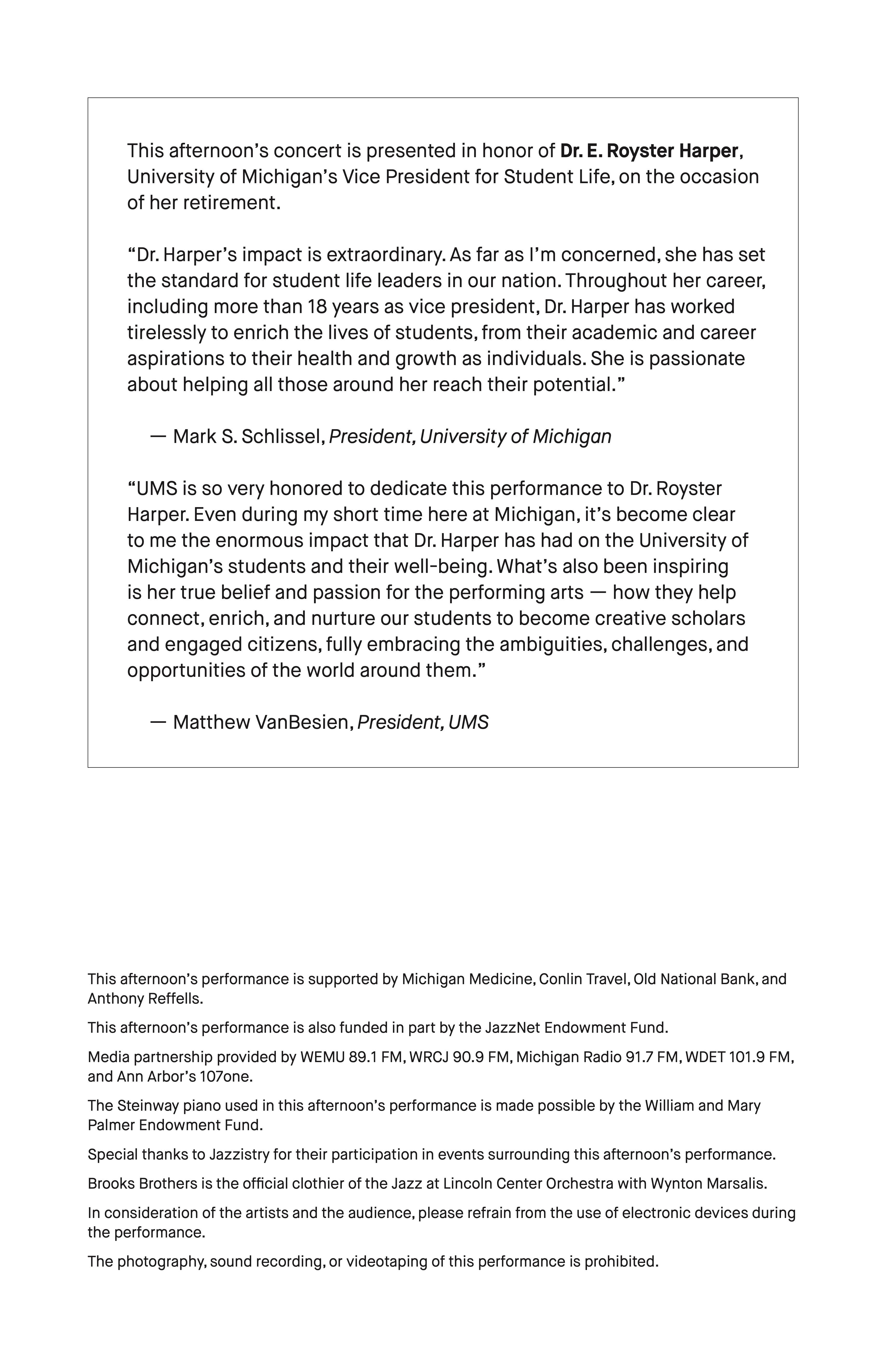 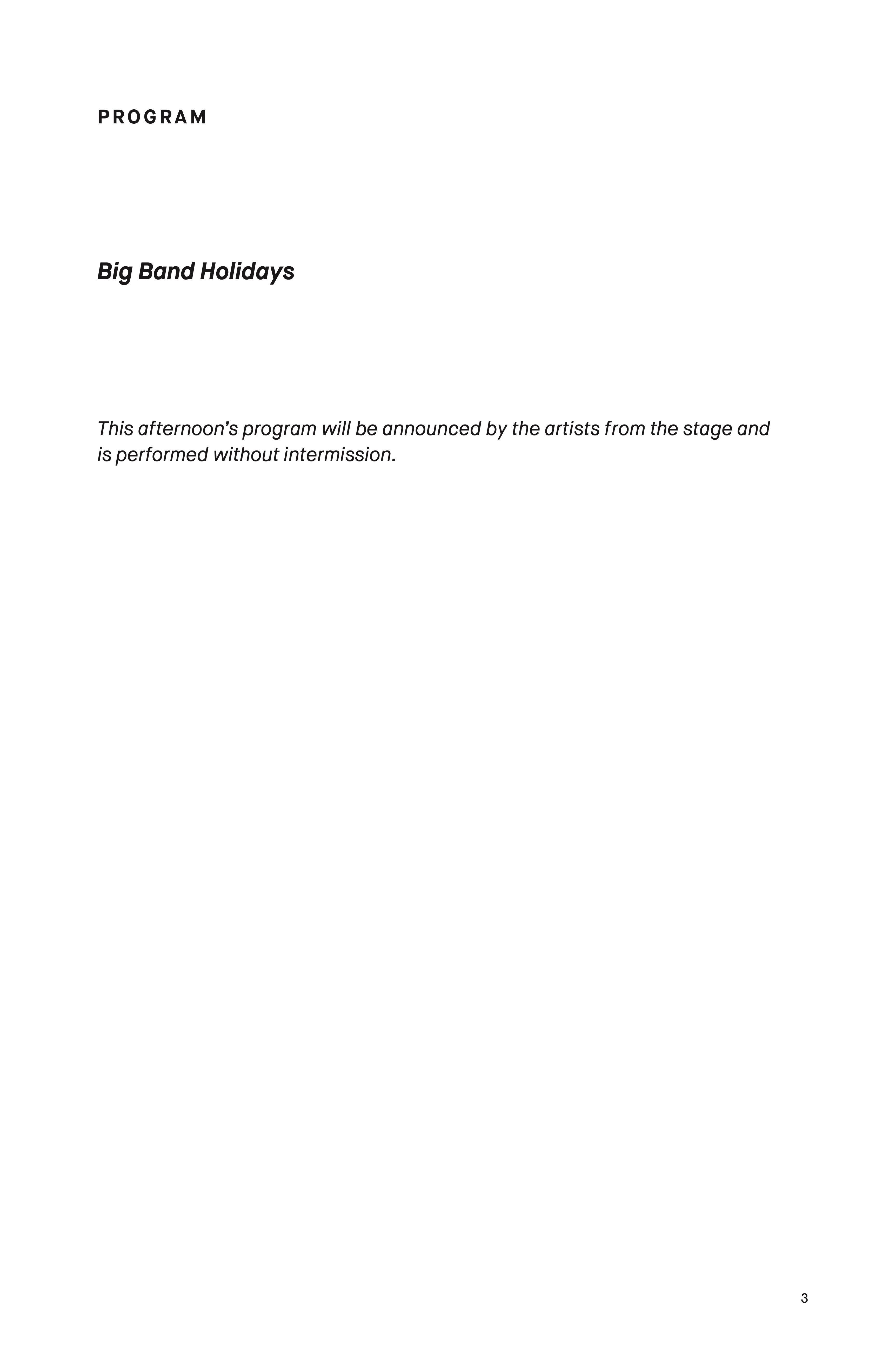 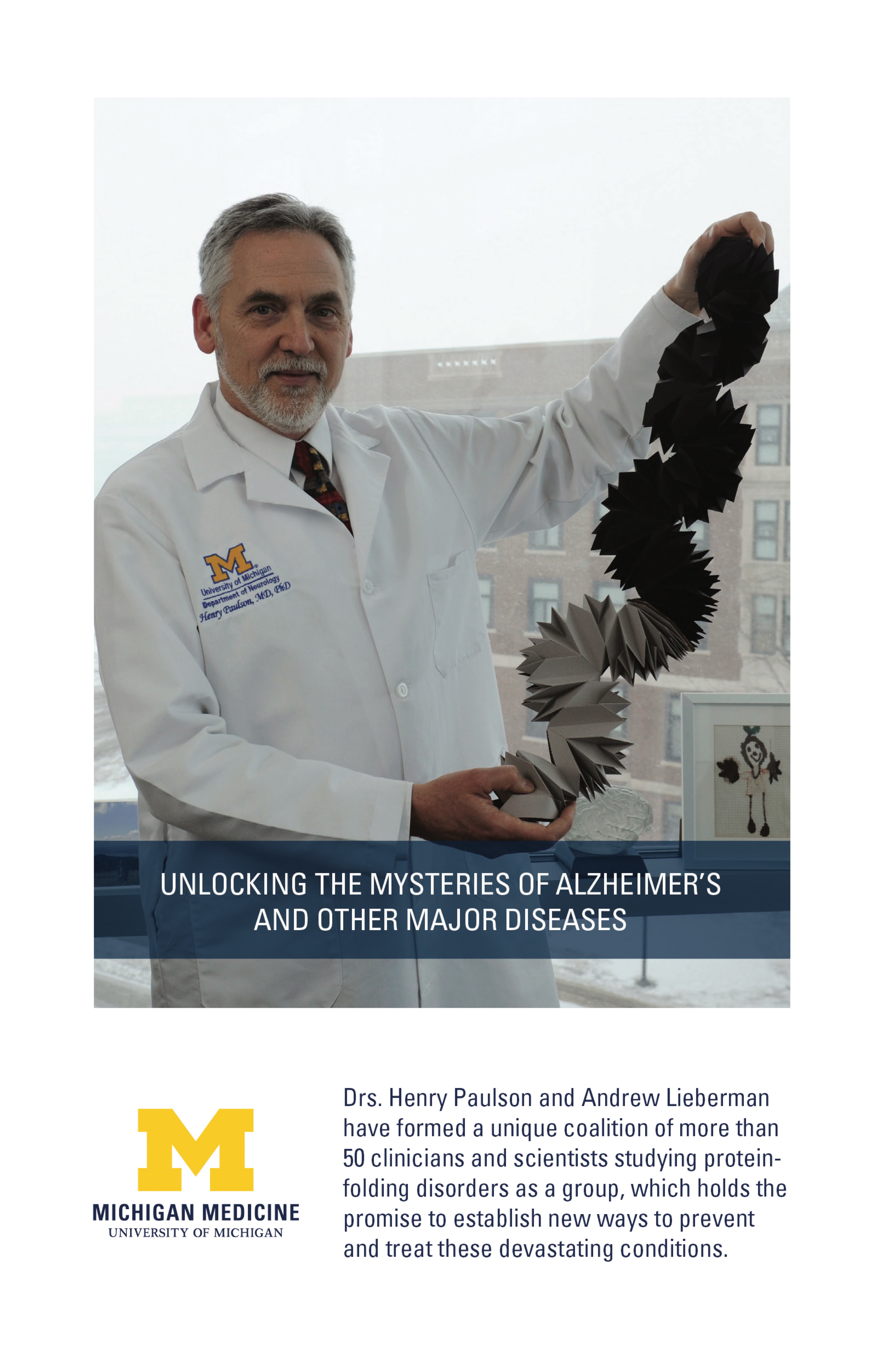 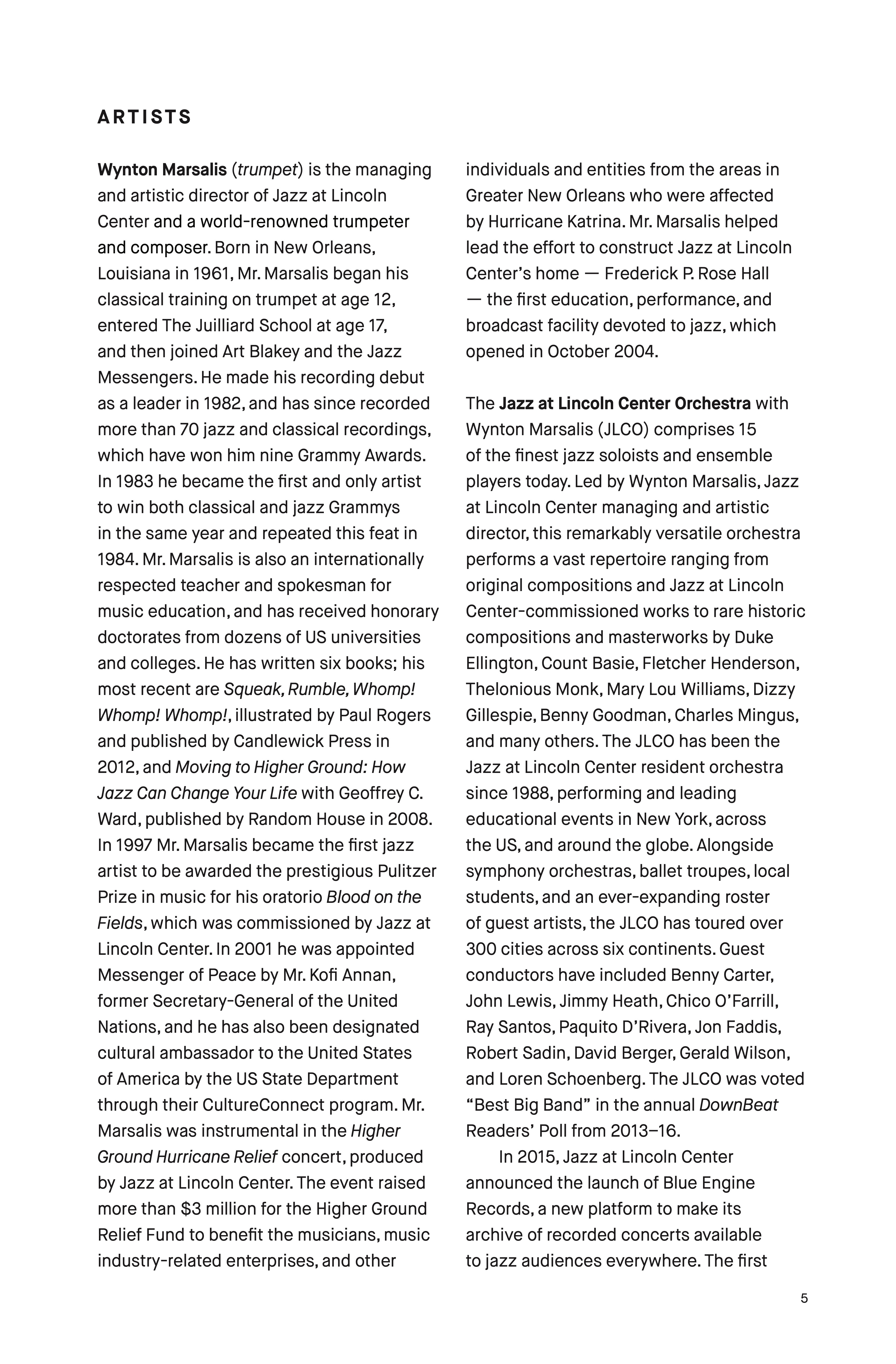 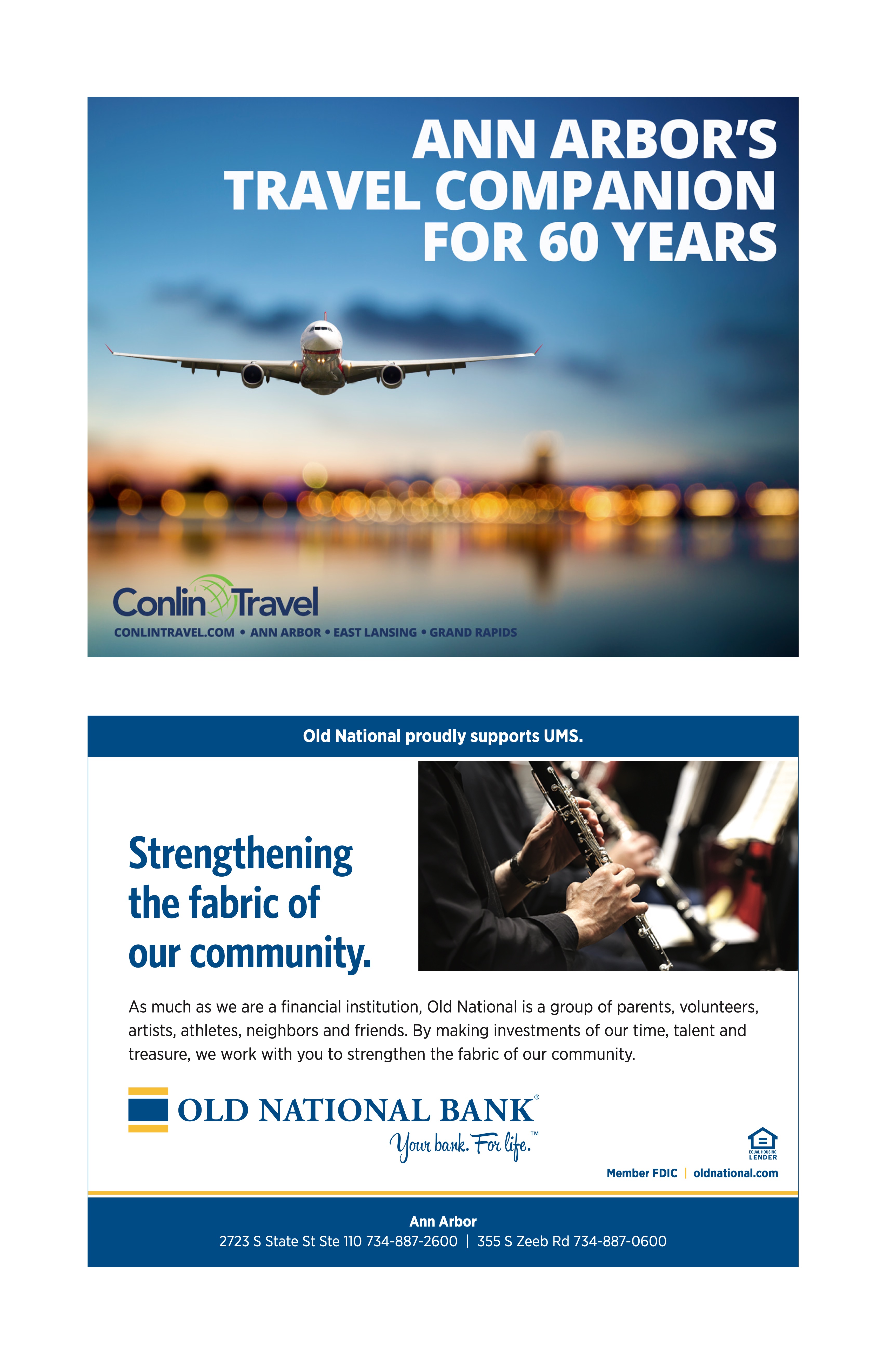 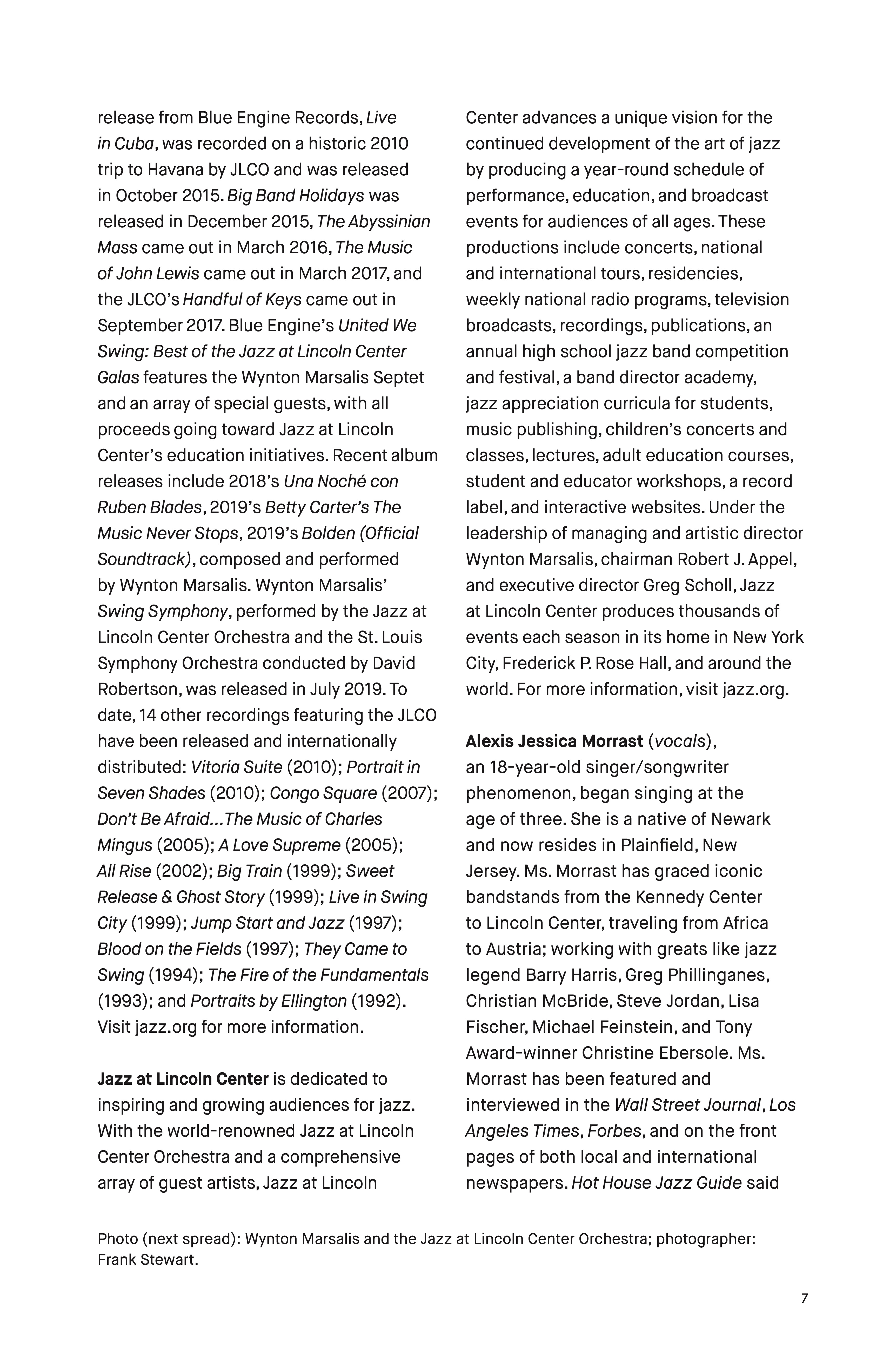 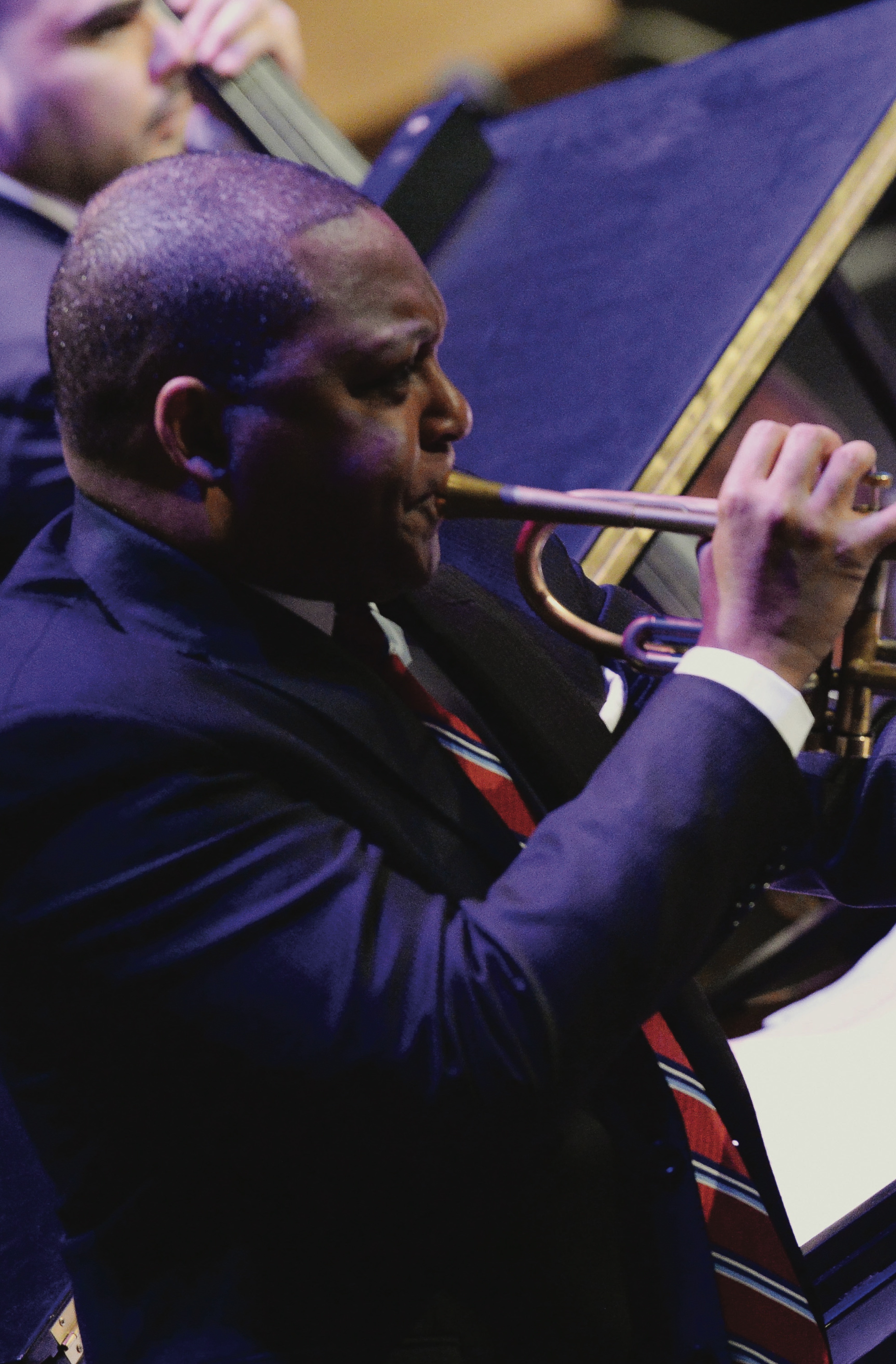 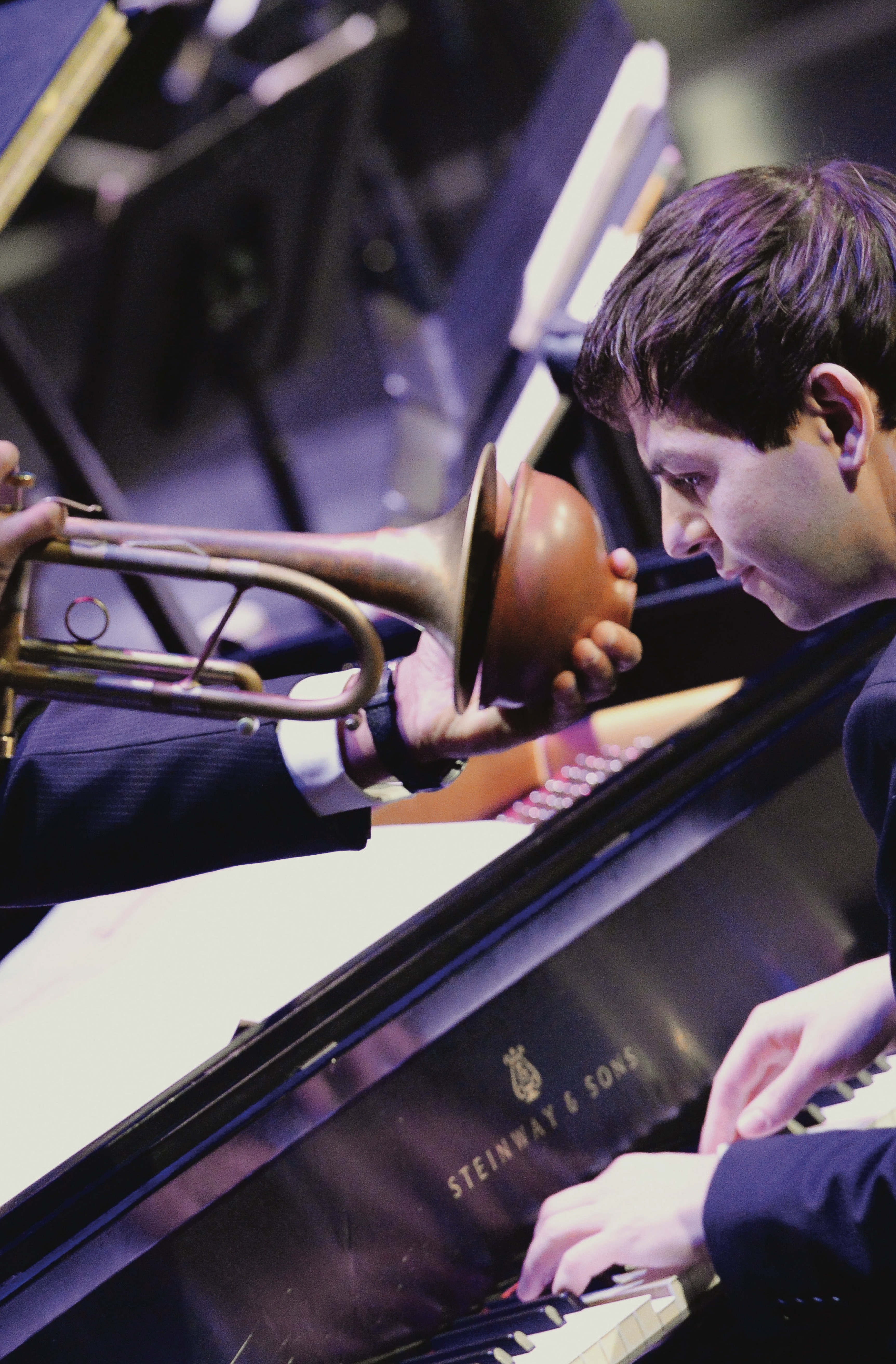 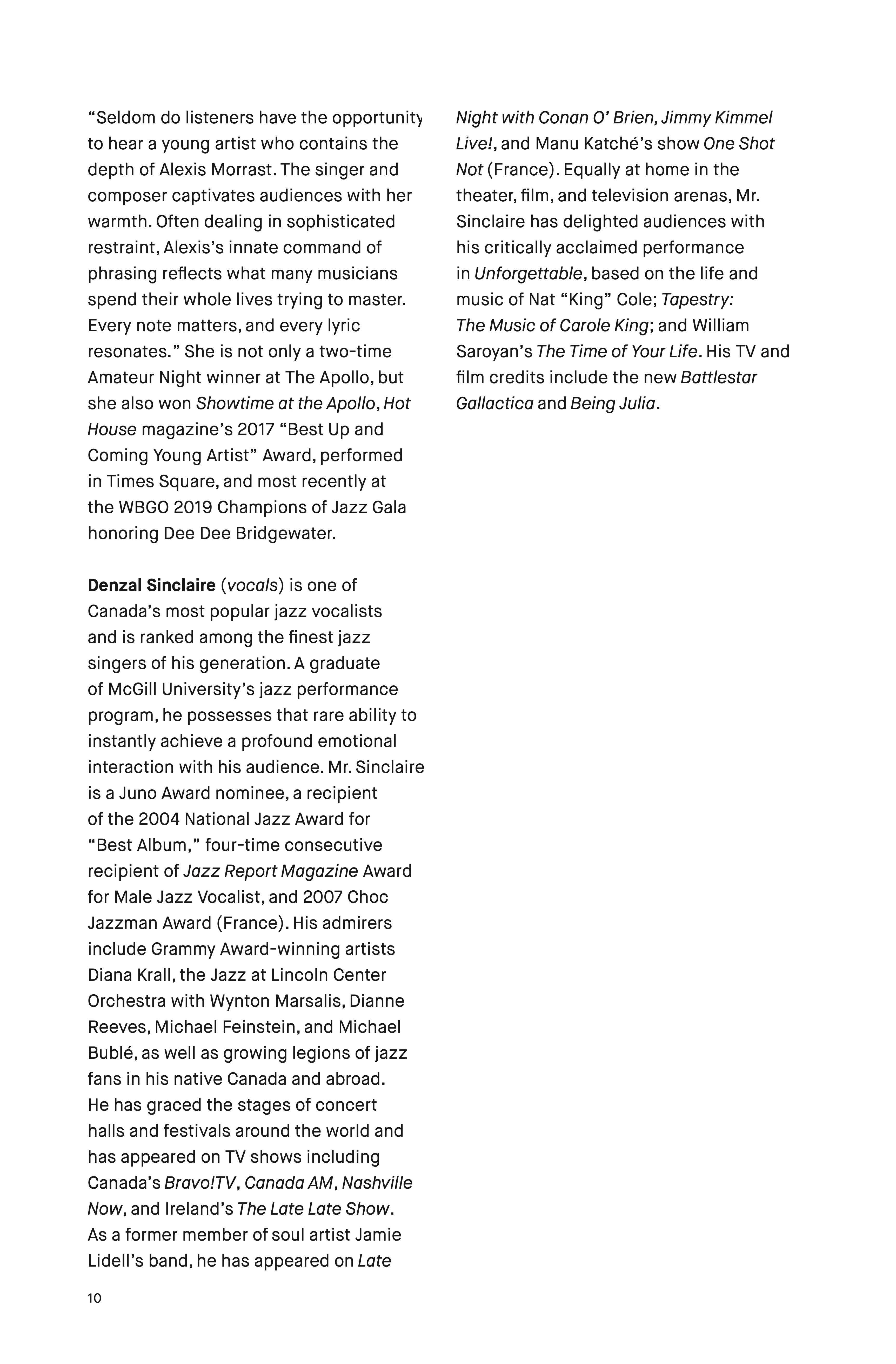 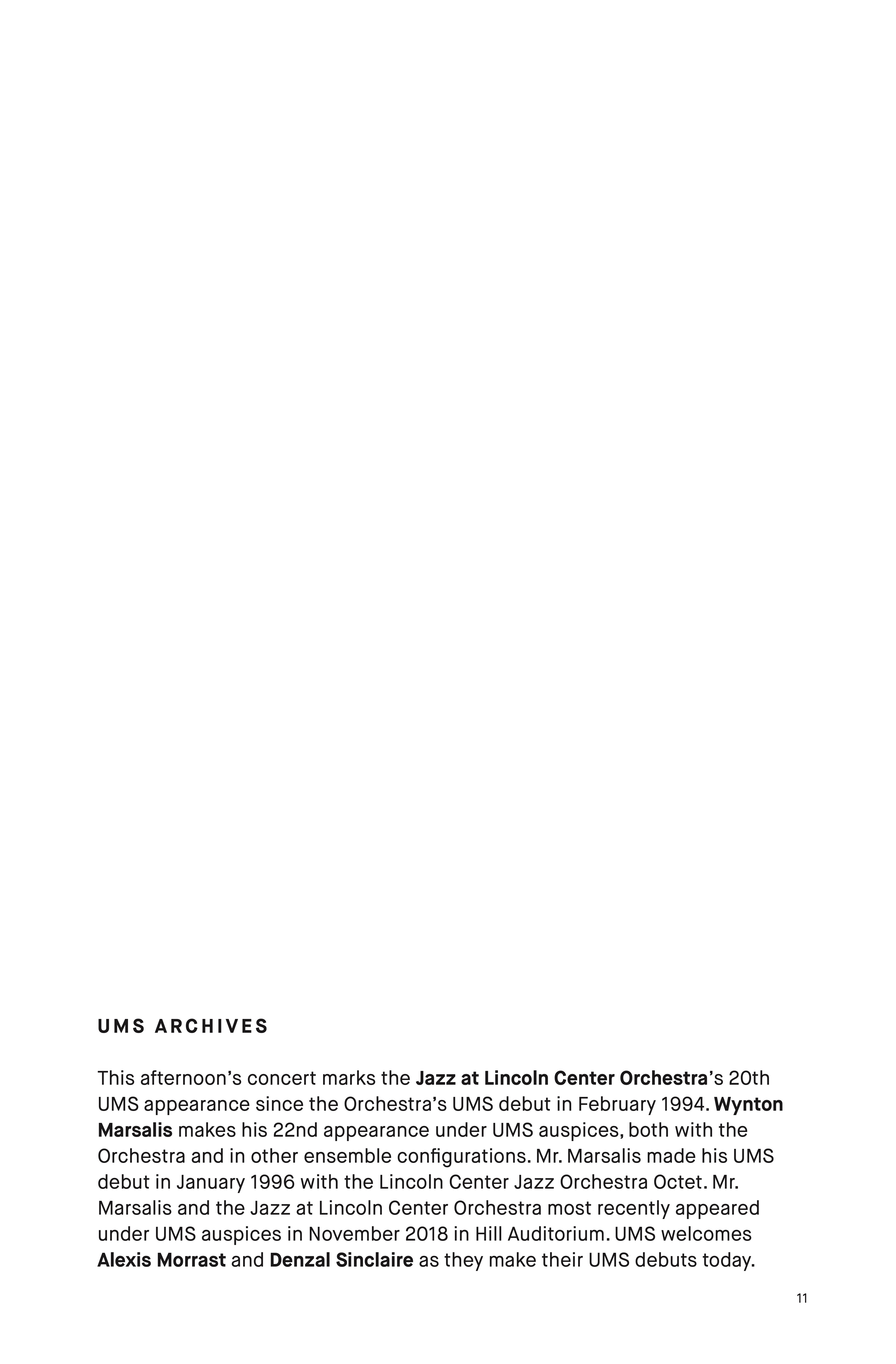 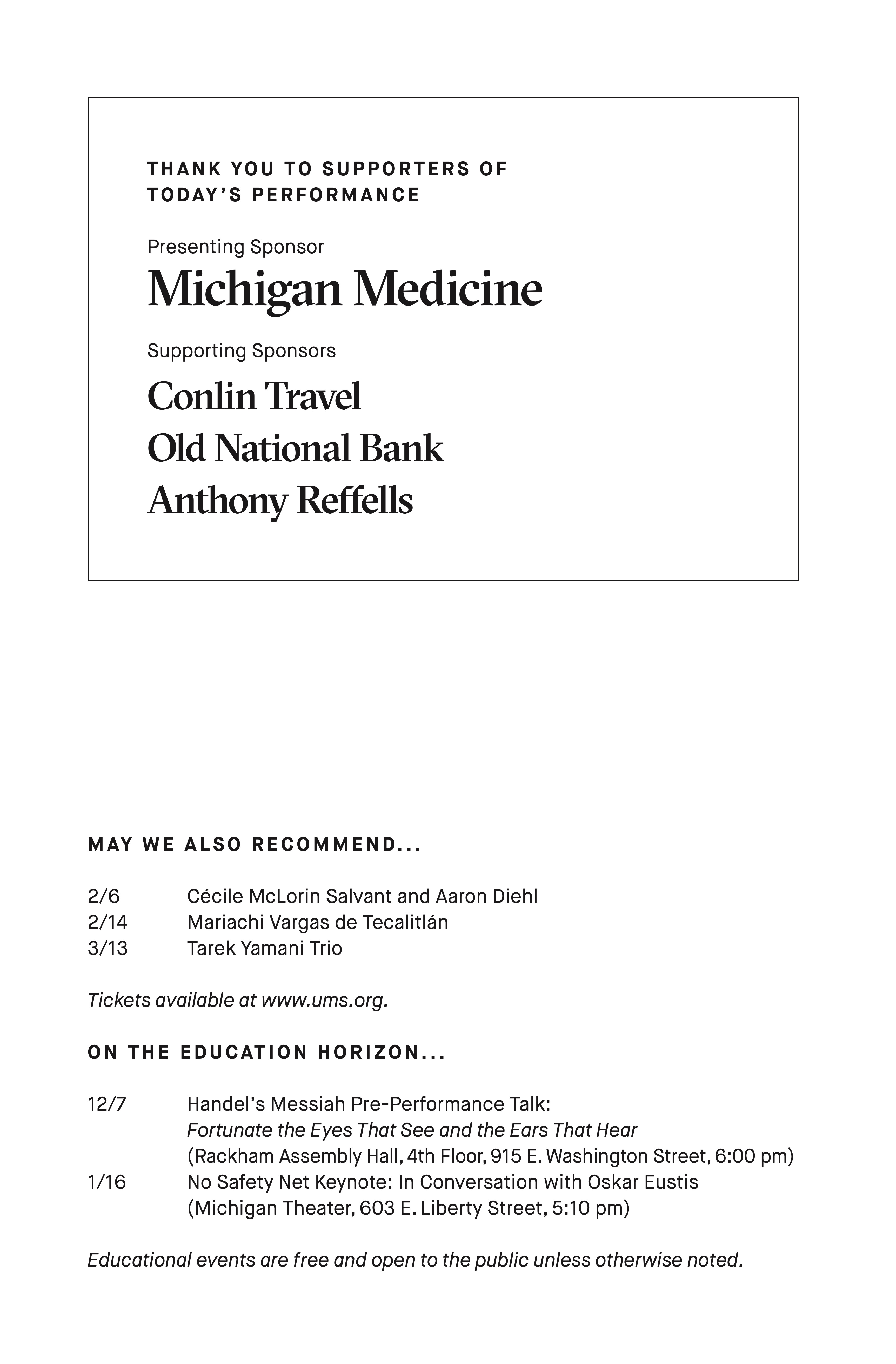 This afternoon’s concert is presented in honor of Dr. E. Royster Harper, University of Michigan’s Vice President for Student Life, on the occasion of her retirement.

“Dr. Harper’s impact is extraordinary. As far as I’m concerned, she has set the standard for student life leaders in our nation. Throughout her career, including more than 18 years as vice president, Dr. Harper has worked tirelessly to enrich the lives of students, from their academic and career aspirations to their health and growth as individuals. She is passionate about helping all those around her reach their potential.”

“UMS is so very honored to dedicate this performance to Dr. Royster Harper. Even during my short time here at Michigan, it’s become clear to me the enormous impact that Dr. Harper has had on the University of Michigan’s students and their well-being. What’s also been inspiring is her true belief and passion for the performing arts — how they help connect, enrich, and nurture our students to become creative scholars and engaged citizens, fully embracing the ambiguities, challenges, and opportunities of the world around them.”

This afternoon’s performance is also funded in part by the JazzNet Endowment Fund.

The Steinway piano used in this afternoon’s performance is made possible by the William and Mary Palmer Endowment Fund.

Special thanks to Jazzistry for their participation in events surrounding this afternoon’s performance. Brooks Brothers is the official clothier of the Jazz at Lincoln Center Orchestra with Wynton Marsalis.

This afternoon’s program will be announced by the artists from the stage and is performed without intermission.

Wynton Marsalis (trumpet) is the managing and artistic director of Jazz at Lincoln Center and a world-renowned trumpeter and composer. Born in New Orleans, Louisiana in 1961, Mr. Marsalis began his classical training on trumpet at age 12, entered The Juilliard School at age 17,

and then joined Art Blakey and the Jazz Messengers. He made his recording debut as a leader in 1982, and has since recorded more than 70 jazz and classical recordings, which have won him nine Grammy Awards. In 1983 he became the first and only artist to win both classical and jazz Grammys
in the same year and repeated this feat in 1984. Mr. Marsalis is also an internationally respected teacher and spokesman for music education, and has received honorary doctorates from dozens of US universities and colleges. He has written six books; his most recent are Squeak, Rumble, Whomp! Whomp! Whomp!, illustrated by Paul Rogers and published by Candlewick Press in
2012, and Moving to Higher Ground: How Jazz Can Change Your Life with Geoffrey C. Ward, published by Random House in 2008. In 1997 Mr. Marsalis became the first jazz artist to be awarded the prestigious Pulitzer Prize in music for his oratorio Blood on the Fields, which was commissioned by Jazz at Lincoln Center. In 2001 he was appointed Messenger of Peace by Mr. Kofi Annan, former Secretary-General of the United Nations, and he has also been designated cultural ambassador to the United States
of America by the US State Department through their CultureConnect program. Mr. Marsalis was instrumental in the Higher Ground Hurricane Relief concert, produced by Jazz at Lincoln Center. The event raised more than $3 million for the Higher Ground Relief Fund to benefit the musicians, music industry-related enterprises, and other

individuals and entities from the areas in Greater New Orleans who were affected by Hurricane Katrina. Mr. Marsalis helped lead the effort to construct Jazz at LincolnCenter’s home — Frederick P. Rose Hall

— the first education, performance, and broadcast facility devoted to jazz, which opened in October 2004.

In 2015, Jazz at Lincoln Center announced the launch of Blue Engine Records, a new platform to make its archive of recorded concerts available to jazz audiences everywhere. The first

Strengthening the fabric of our community.

As much as we are a financial institution, Old National is a group of parents, volunteers, artists, athletes, neighbors and friends. By making investments of our time, talent and treasure, we work with you to strengthen the fabric of our community.

release from Blue Engine Records, Live
in Cuba, was recorded on a historic 2010 trip to Havana by JLCO and was released
in October 2015. Big Band Holidays was released in December 2015, The Abyssinian Mass came out in March 2016, The Music
of John Lewis came out in March 2017, and the JLCO’s Handful of Keys came out in September 2017. Blue Engine’s United We Swing: Best of the Jazz at Lincoln Center Galas features the Wynton Marsalis Septet and an array of special guests, with all proceeds going toward Jazz at Lincoln Center’s education initiatives. Recent album releases include 2018’s Una Noché con Ruben Blades, 2019’s Betty Carter’s The Music Never Stops, 2019’s Bolden (Official Soundtrack), composed and performed
by Wynton Marsalis. Wynton Marsalis’
Swing Symphony, performed by the Jazz at Lincoln Center Orchestra and the St. Louis Symphony Orchestra conducted by David Robertson, was released in July 2019. Todate, 14 other recordings featuring the JLCO have been released and internationally distributed: Vitoria Suite (2010); Portrait in Seven Shades (2010); Congo Square (2007);Don’t Be Afraid...The Music of Charles Mingus (2005); A Love Supreme (2005);
All Rise (2002); Big Train (1999); Sweet Release & Ghost Story (1999); Live in Swing City (1999); Jump Start and Jazz (1997); Blood on the Fields (1997); They Came to Swing (1994); The Fire of the Fundamentals (1993); and Portraits by Ellington (1992). Visit jazz.org for more information.

at Lincoln Center produces thousands of events each season in its home in New York City, Frederick P. Rose Hall, and around the world. For more information, visit jazz.org.

“Seldom do listeners have the opportunity to hear a young artist who contains the depth of Alexis Morrast. The singer and composer captivates audiences with her warmth. Often dealing in sophisticated restraint, Alexis’s innate command of phrasing reflects what many musicians spend their whole lives trying to master. Every note matters, and every lyric resonates.” She is not only a two-time Amateur Night winner at The Apollo, but she also won Showtime at the Apollo, Hot House magazine’s 2017 “Best Up and Coming Young Artist” Award, performed

in Times Square, and most recently at the WBGO 2019 Champions of Jazz Gala honoring Dee Dee Bridgewater.

Denzal Sinclaire (vocals) is one of Canada’s most popular jazz vocalists
and is ranked among the finest jazz singers of his generation. A graduate
of McGill University’s jazz performance program, he possesses that rare ability to instantly achieve a profound emotional interaction with his audience. Mr. Sinclaire is a Juno Award nominee, a recipient

of the 2004 National Jazz Award for “Best Album,” four-time consecutive recipient of Jazz Report Magazine Award for Male Jazz Vocalist, and 2007 Choc Jazzman Award (France). His admirers include Grammy Award-winning artists Diana Krall, the Jazz at Lincoln Center Orchestra with Wynton Marsalis, Dianne Reeves, Michael Feinstein, and Michael Bublé, as well as growing legions of jazz fans in his native Canada and abroad.
He has graced the stages of concert halls and festivals around the world and has appeared on TV shows including Canada’s Bravo!TV, Canada AM, Nashville Now, and Ireland’s The Late Late Show. As a former member of soul artist Jamie Lidell’s band, he has appeared on Late

Night with Conan O’ Brien, Jimmy Kimmel Live!, and Manu Katché’s show One Shot Not (France). Equally at home in the theater, film, and television arenas, Mr. Sinclaire has delighted audiences with his critically acclaimed performance

in Unforgettable, based on the life and music of Nat “King” Cole; Tapestry:
The Music of Carole King; and William Saroyan’s The Time of Your Life. His TV and film credits include the new Battlestar Gallactica and Being Julia.

THANK YOU TO SUPPORTERS OF TODAY’S PERFORMANCE

Fortunate the Eyes That See and the Ears That Hear