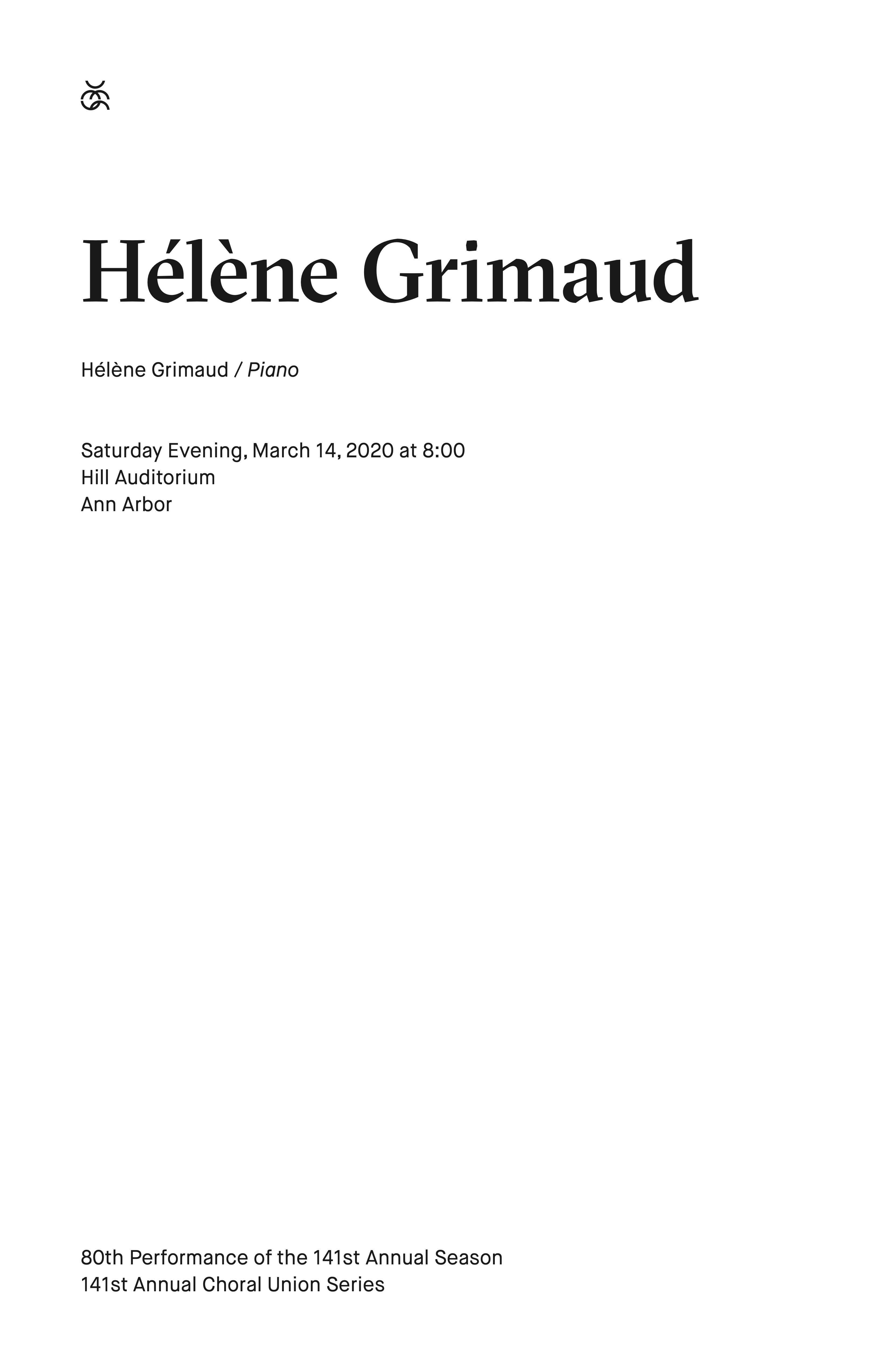 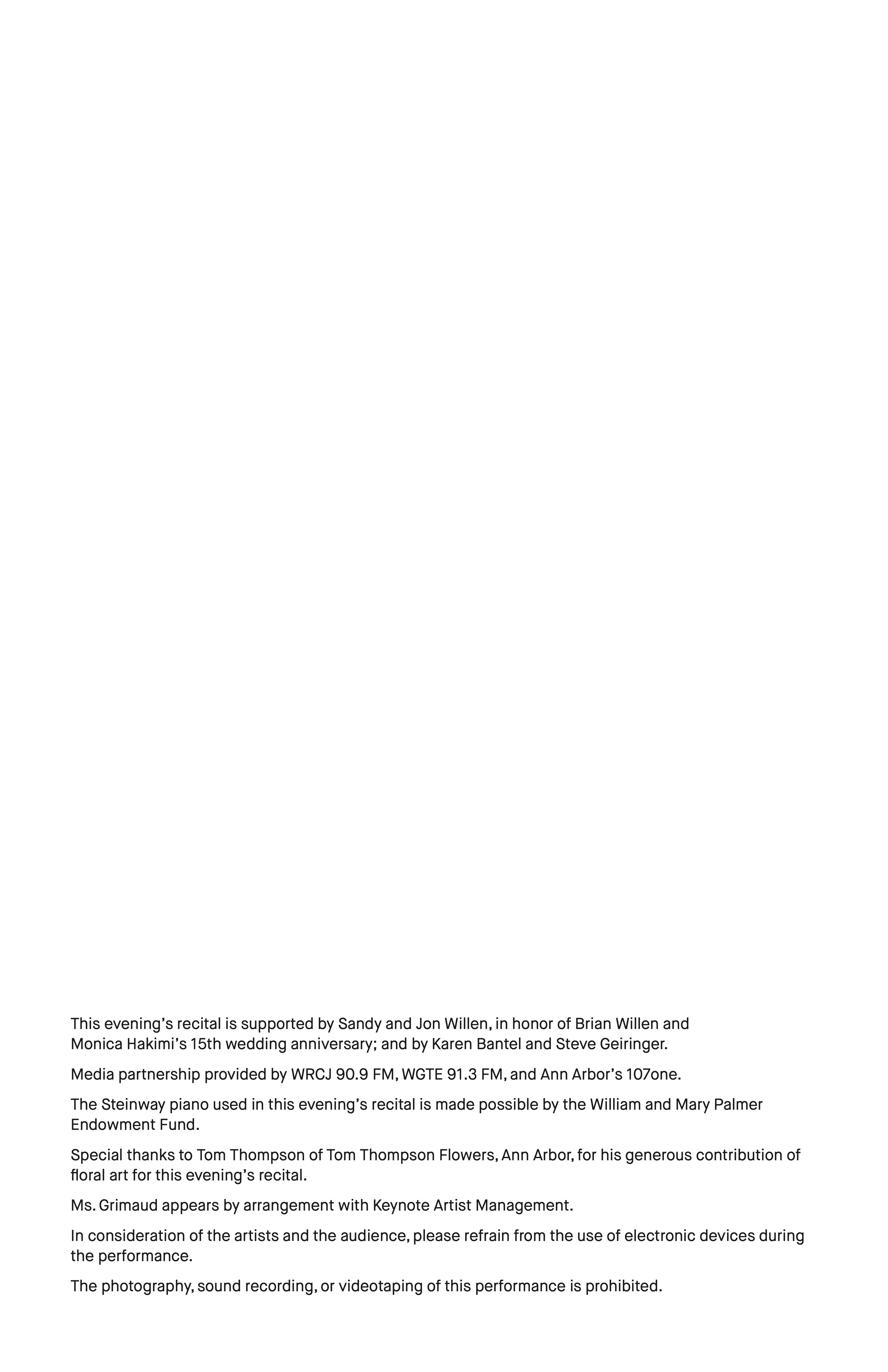 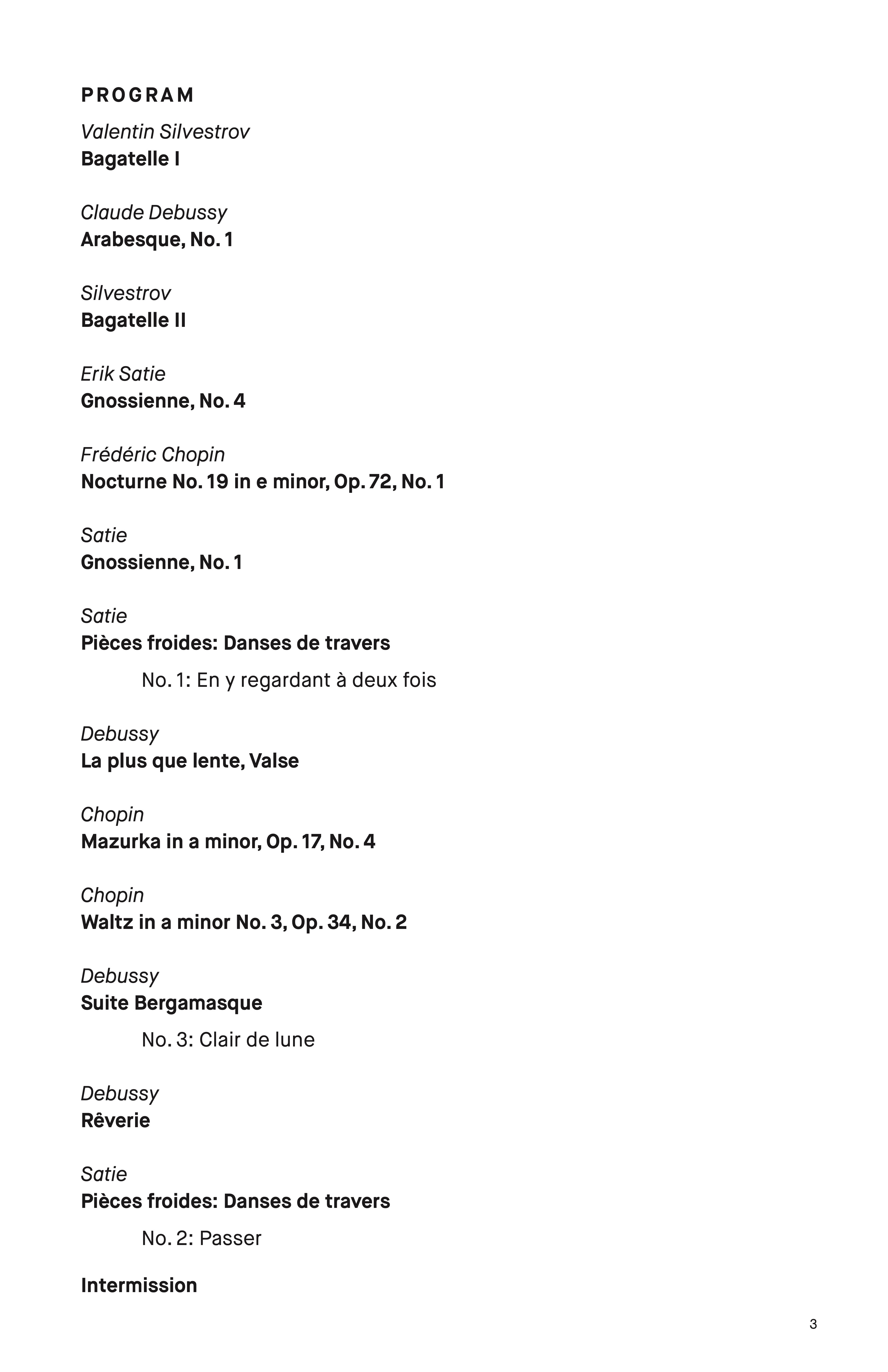 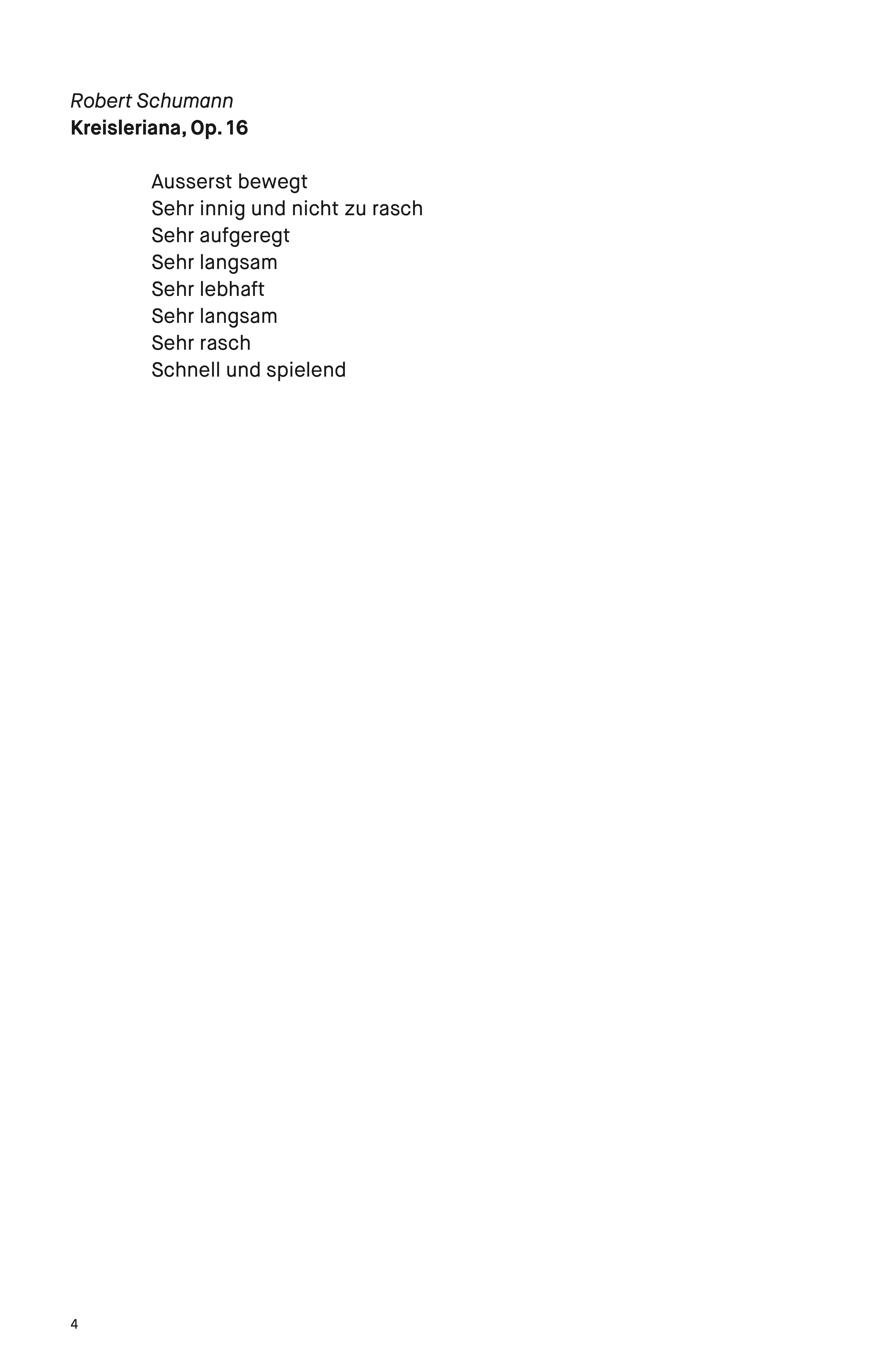 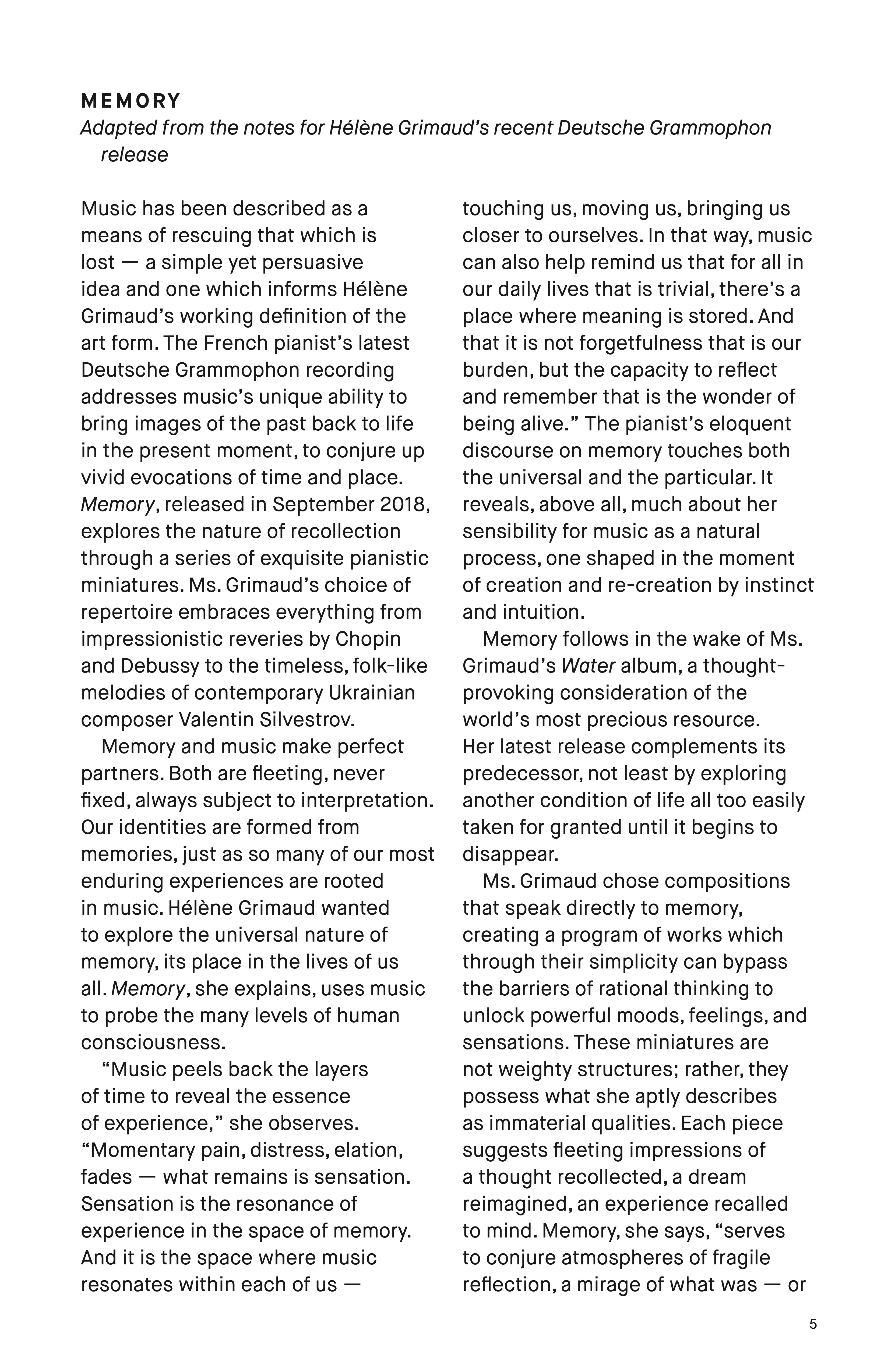 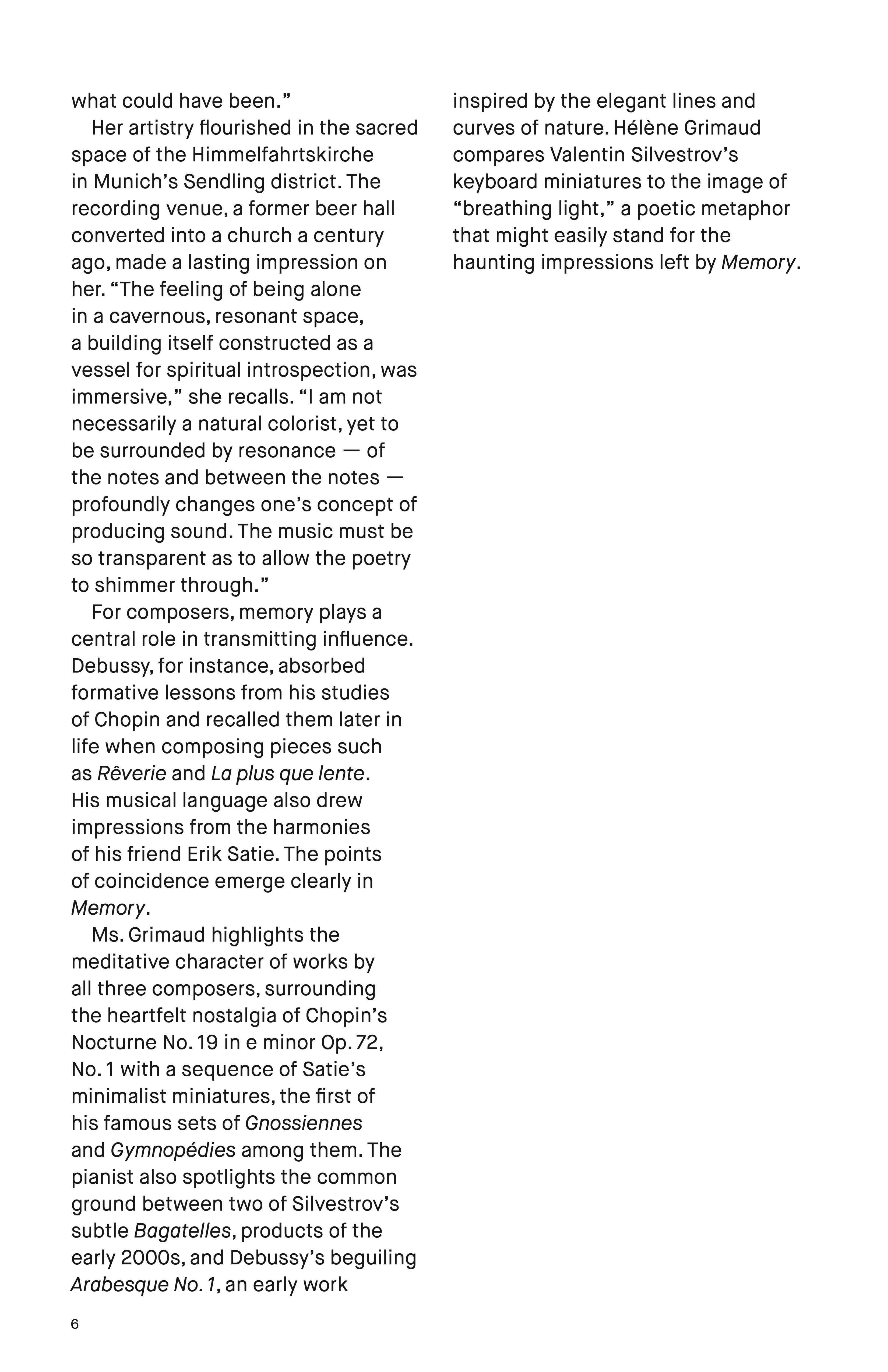 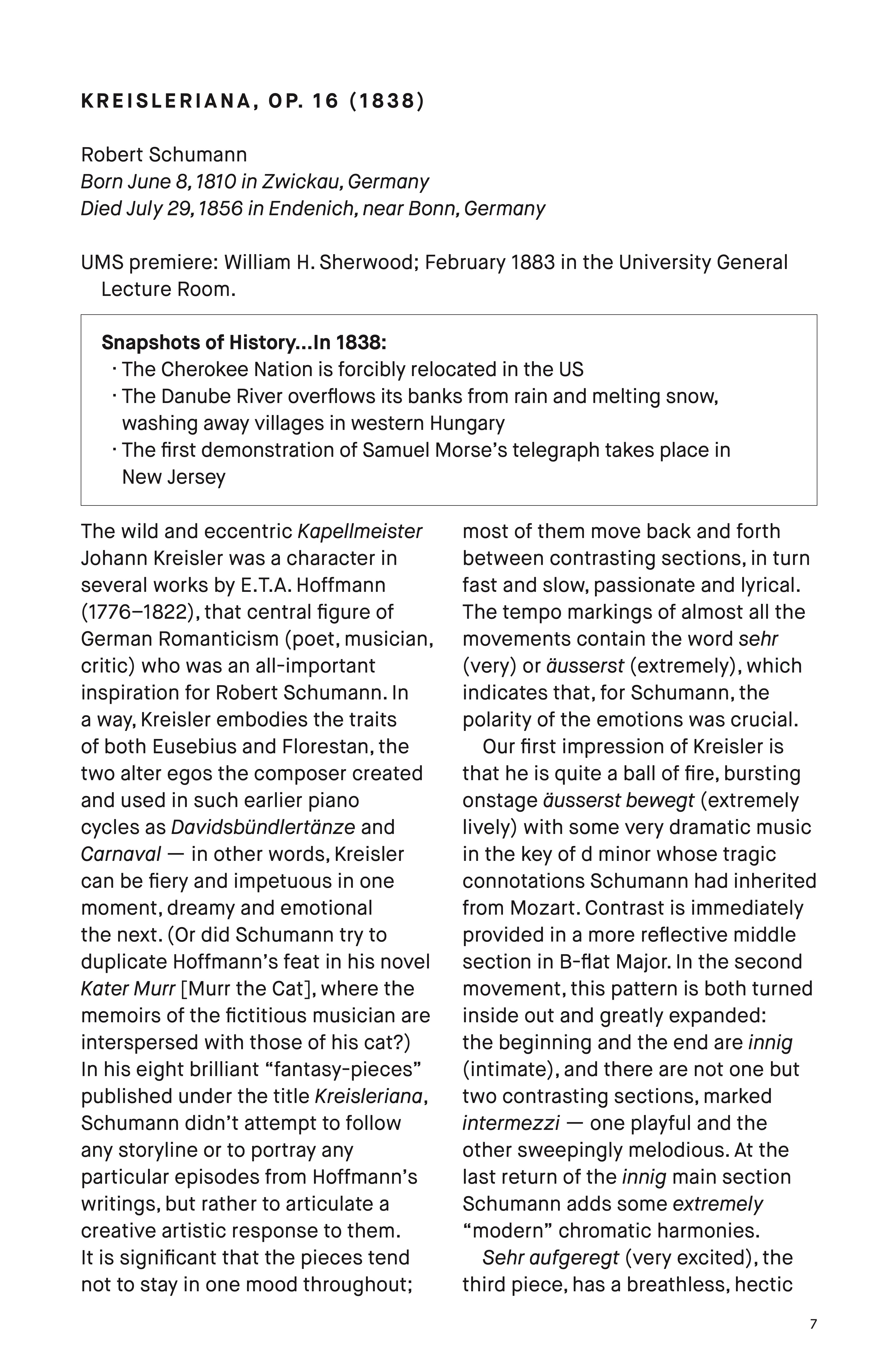 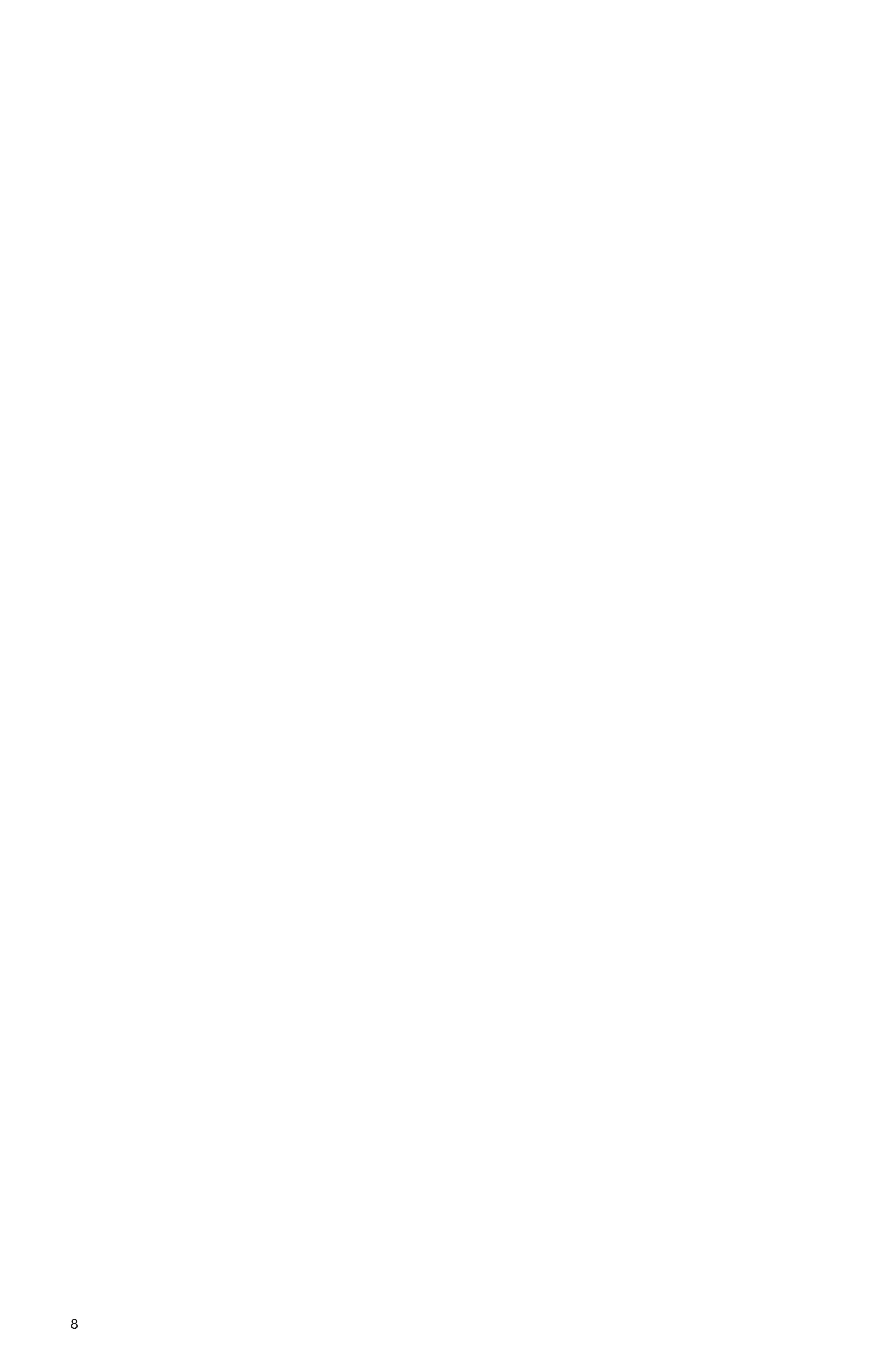 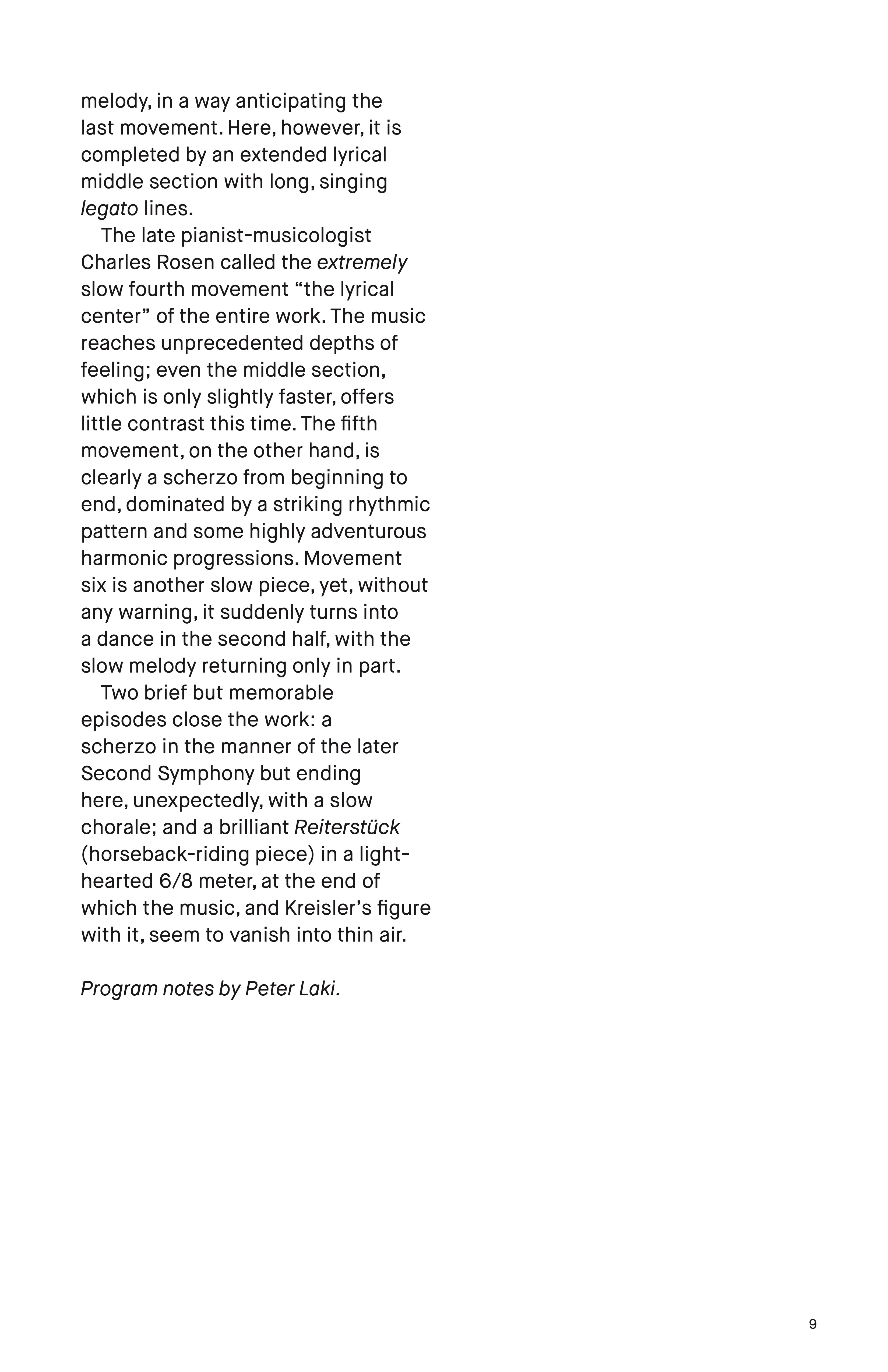 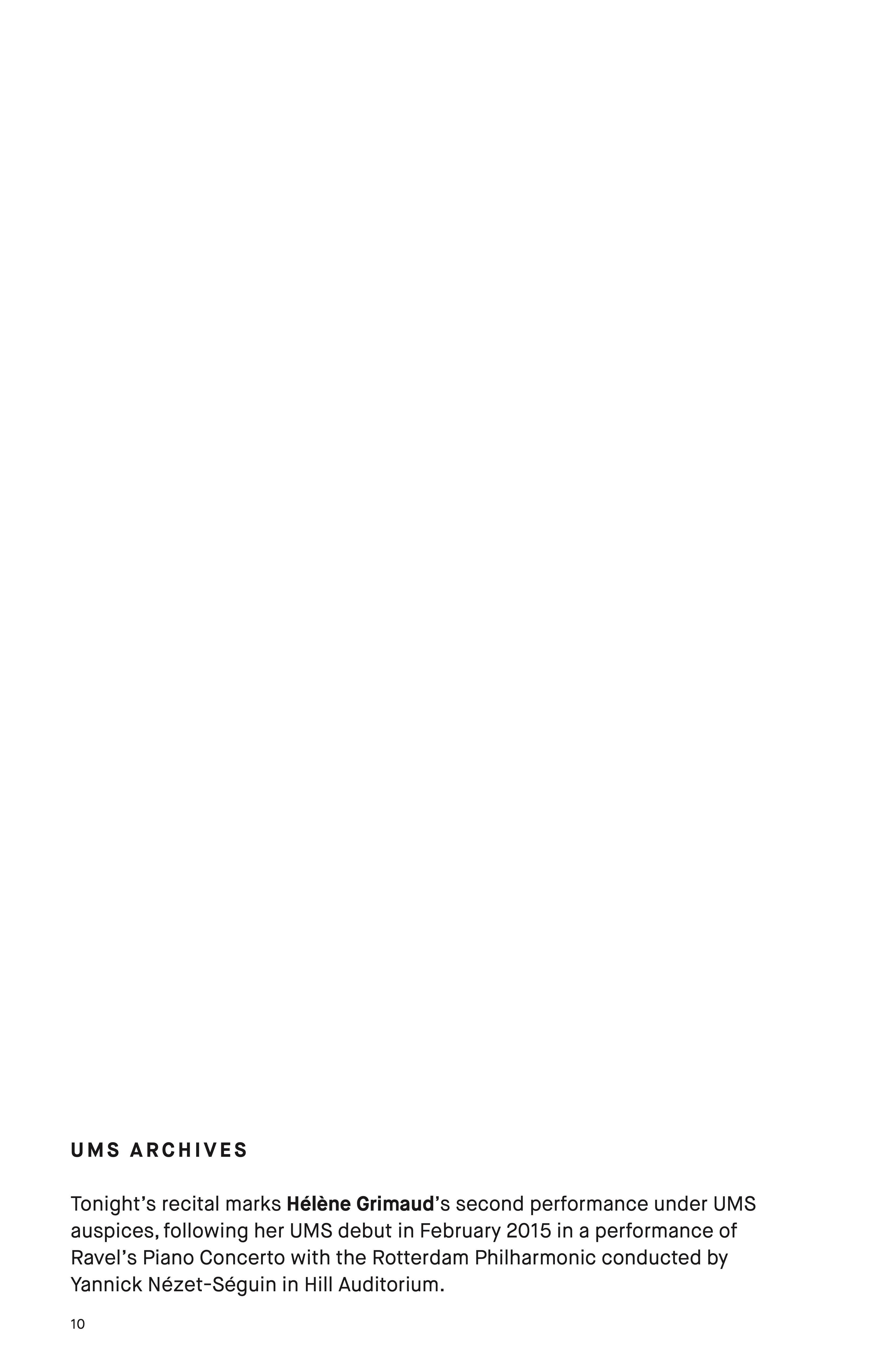 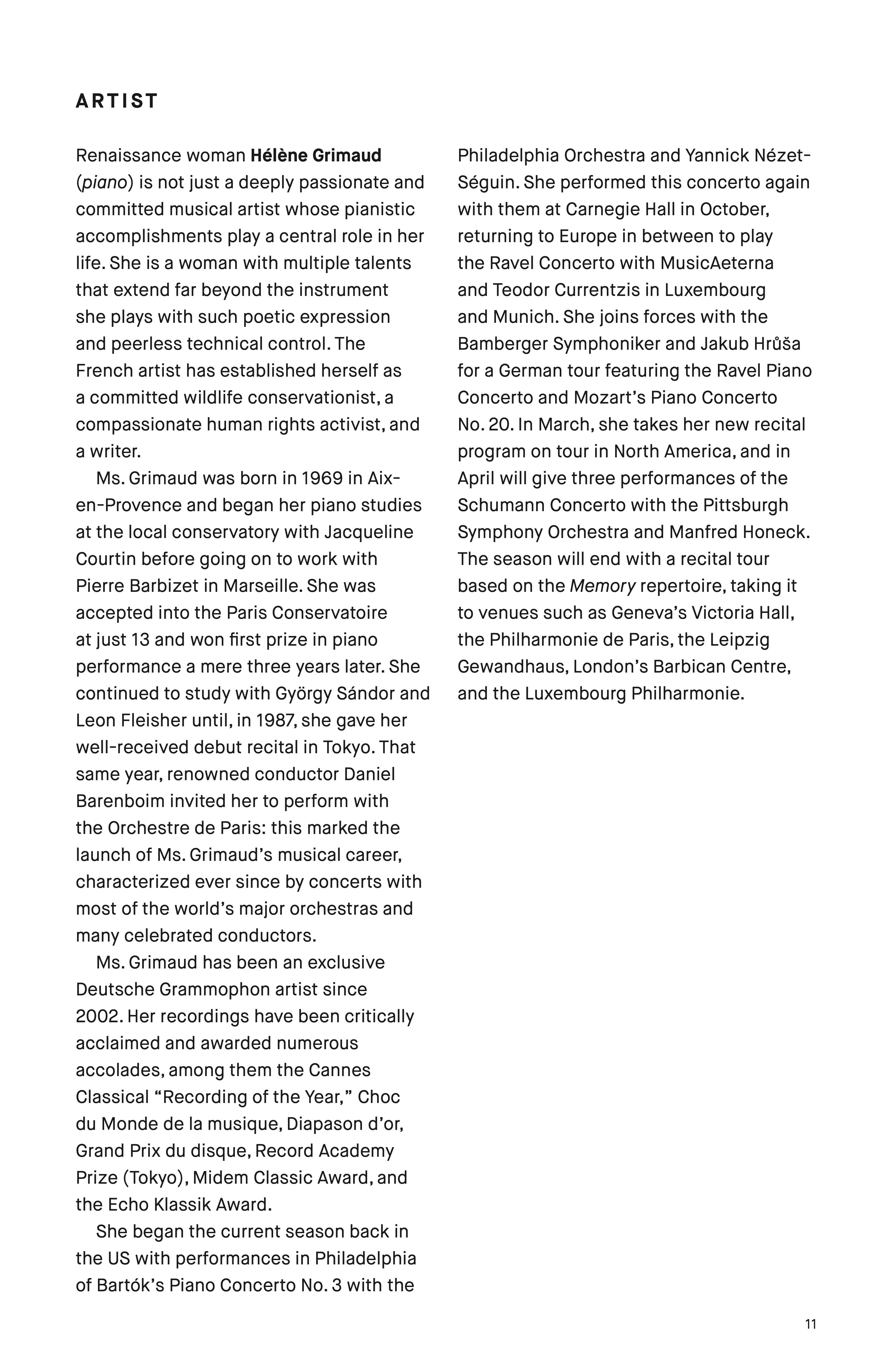 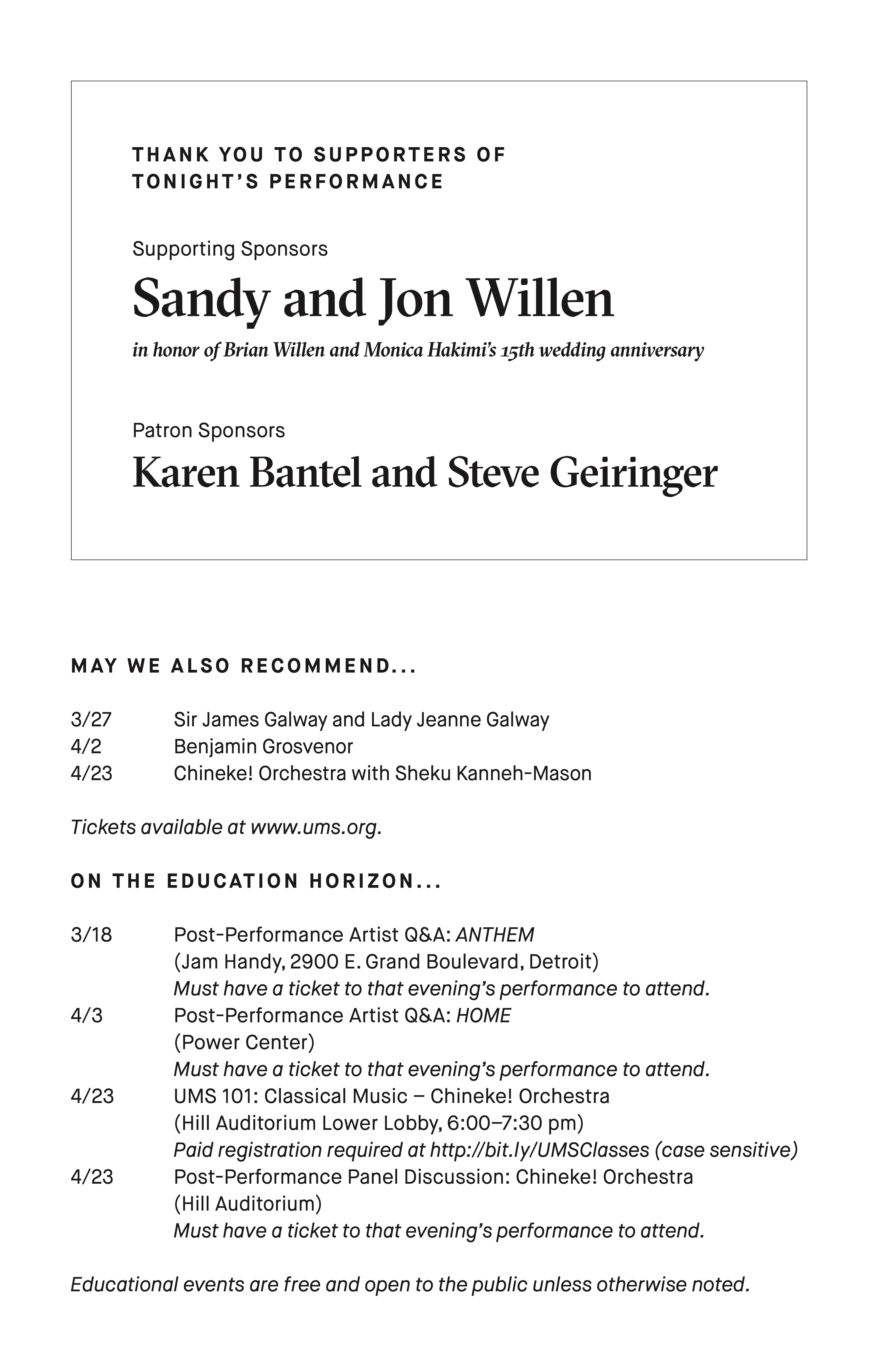 This evening’s recital is supported by Sandy and Jon Willen, in honor of Brian Willen and Monica Hakimi’s 15th wedding anniversary; and by Karen Bantel and Steve Geiringer.

The Steinway piano used in this evening’s recital is made possible by the William and Mary Palmer Endowment Fund.

Special thanks to Tom Thompson of Tom Thompson Flowers, Ann Arbor, for his generous contribution of floral art for this evening’s recital.

Music has been described as a means of rescuing that which is
lost — a simple yet persuasive
idea and one which informs Hélène Grimaud’s working definition of the art form. The French pianist’s latest Deutsche Grammophon recording addresses music’s unique ability to bring images of the past back to life in the present moment, to conjure up vivid evocations of time and place. Memory, released in September 2018, explores the nature of recollection through a series of exquisite pianistic miniatures. Ms. Grimaud’s choice of repertoire embraces everything from impressionistic reveries by Chopin and Debussy to the timeless, folk-like melodies of contemporary Ukrainian composer Valentin Silvestrov.

Memory and music make perfect partners. Both are fleeting, never fixed, always subject to interpretation. Our identities are formed from memories, just as so many of our most enduring experiences are rooted

in music. Hélène Grimaud wanted
to explore the universal nature of memory, its place in the lives of us all. Memory, she explains, uses music to probe the many levels of human consciousness.

“Music peels back the layers
of time to reveal the essence
of experience,” she observes. “Momentary pain, distress, elation, fades — what remains is sensation. Sensation is the resonance of experience in the space of memory. And it is the space where music resonates within each of us —

touching us, moving us, bringing us closer to ourselves. In that way, music can also help remind us that for all in our daily lives that is trivial, there’s a place where meaning is stored. And that it is not forgetfulness that is our burden, but the capacity to reflect and remember that is the wonder of being alive.” The pianist’s eloquent discourse on memory touches both the universal and the particular. It reveals, above all, much about her sensibility for music as a natural process, one shaped in the moment of creation and re-creation by instinct and intuition.

Memory follows in the wake of Ms. Grimaud’s Water album, a thought- provoking consideration of the world’s most precious resource.

Her latest release complements its predecessor, not least by exploring another condition of life all too easily taken for granted until it begins to disappear.

Ms. Grimaud chose compositions that speak directly to memory, creating a program of works which through their simplicity can bypass the barriers of rational thinking to unlock powerful moods, feelings, and sensations. These miniatures are

not weighty structures; rather, they possess what she aptly describes as immaterial qualities. Each piece suggests fleeting impressions of

a thought recollected, a dream reimagined, an experience recalled to mind. Memory, she says, “serves to conjure atmospheres of fragile reflection, a mirage of what was — or

what could have been.”
Her artistry flourished in the sacred

space of the Himmelfahrtskirche
in Munich’s Sendling district. The recording venue, a former beer hall converted into a church a century ago, made a lasting impression on her. “The feeling of being alone
in a cavernous, resonant space,
a building itself constructed as a vessel for spiritual introspection, was immersive,” she recalls. “I am not necessarily a natural colorist, yet to be surrounded by resonance — of the notes and between the notes — profoundly changes one’s concept of producing sound. The music must be so transparent as to allow the poetry to shimmer through.”

For composers, memory plays a central role in transmitting influence. Debussy, for instance, absorbed formative lessons from his studies of Chopin and recalled them later in life when composing pieces such
as Rêverie and La plus que lente.
His musical language also drew impressions from the harmonies
of his friend Erik Satie. The points
of coincidence emerge clearly in Memory.

Ms. Grimaud highlights the meditative character of works by
all three composers, surrounding
the heartfelt nostalgia of Chopin’s Nocturne No. 19 in e minor Op. 72, No. 1 with a sequence of Satie’s minimalist miniatures, the first of
his famous sets of Gnossiennes
and Gymnopédies among them. The pianist also spotlights the common ground between two of Silvestrov’s subtle Bagatelles, products of the early 2000s, and Debussy’s beguiling Arabesque No. 1, an early work

inspired by the elegant lines and curves of nature. Hélène Grimaud compares Valentin Silvestrov’s keyboard miniatures to the image of “breathing light,” a poetic metaphor that might easily stand for the haunting impressions left by Memory.

The wild and eccentric Kapellmeister Johann Kreisler was a character in several works by E.T.A. Hoffmann (1776–1822), that central figure of German Romanticism (poet, musician, critic) who was an all-important inspiration for Robert Schumann. In

a way, Kreisler embodies the traits
of both Eusebius and Florestan, the two alter egos the composer created and used in such earlier piano
cycles as Davidsbündlertänze and Carnaval — in other words, Kreisler can be fiery and impetuous in one moment, dreamy and emotional
the next. (Or did Schumann try to duplicate Hoffmann’s feat in his novel Kater Murr [Murr the Cat], where the memoirs of the fictitious musician areinterspersed with those of his cat?) In his eight brilliant “fantasy-pieces” published under the title Kreisleriana, Schumann didn’t attempt to follow any storyline or to portray any particular episodes from Hoffmann’s writings, but rather to articulate a creative artistic response to them.
It is significant that the pieces tend not to stay in one mood throughout;

most of them move back and forth between contrasting sections, in turn fast and slow, passionate and lyrical. The tempo markings of almost all the movements contain the word sehr (very) or äusserst (extremely), which indicates that, for Schumann, the polarity of the emotions was crucial.

Our first impression of Kreisler is that he is quite a ball of fire, bursting onstage äusserst bewegt (extremely lively) with some very dramatic music in the key of d minor whose tragic connotations Schumann had inherited from Mozart. Contrast is immediately provided in a more reflective middle section in B-flat Major. In the second movement, this pattern is both turned inside out and greatly expanded:
the beginning and the end are innig (intimate), and there are not one but two contrasting sections, marked intermezzi — one playful and the other sweepingly melodious. At the last return of the innig main section Schumann adds some extremely “modern” chromatic harmonies.

melody, in a way anticipating the last movement. Here, however, it is completed by an extended lyrical middle section with long, singing legato lines.

The late pianist-musicologist Charles Rosen called the extremely slow fourth movement “the lyrical center” of the entire work. The music reaches unprecedented depths of feeling; even the middle section, which is only slightly faster, offers little contrast this time. The fifth movement, on the other hand, is clearly a scherzo from beginning to end, dominated by a striking rhythmic pattern and some highly adventurous harmonic progressions. Movement six is another slow piece, yet, without any warning, it suddenly turns into
a dance in the second half, with the slow melody returning only in part.

Two brief but memorable
episodes close the work: a
scherzo in the manner of the later Second Symphony but ending
here, unexpectedly, with a slow chorale; and a brilliant Reiterstück (horseback-riding piece) in a light- hearted 6/8 meter, at the end of which the music, and Kreisler’s figure with it, seem to vanish into thin air.

Renaissance woman Hélène Grimaud (piano) is not just a deeply passionate and committed musical artist whose pianistic accomplishments play a central role in her life. She is a woman with multiple talents that extend far beyond the instrument
she plays with such poetic expression and peerless technical control. The French artist has established herself as
a committed wildlife conservationist, a compassionate human rights activist, and a writer.

Ms. Grimaud was born in 1969 in Aix- en-Provence and began her piano studies at the local conservatory with Jacqueline Courtin before going on to work with Pierre Barbizet in Marseille. She was accepted into the Paris Conservatoire
at just 13 and won first prize in piano performance a mere three years later. She continued to study with György Sándor and Leon Fleisher until, in 1987, she gave her well-received debut recital in Tokyo. That same year, renowned conductor Daniel Barenboim invited her to perform with
the Orchestre de Paris: this marked the launch of Ms. Grimaud’s musical career, characterized ever since by concerts with most of the world’s major orchestras and many celebrated conductors.

She began the current season back in the US with performances in Philadelphia of Bartók’s Piano Concerto No. 3 with the

Philadelphia Orchestra and Yannick Nézet- Séguin. She performed this concerto again with them at Carnegie Hall in October, returning to Europe in between to play

the Ravel Concerto with MusicAeterna
and Teodor Currentzis in Luxembourg
and Munich. She joins forces with the Bamberger Symphoniker and Jakub Hrůša for a German tour featuring the Ravel Piano Concerto and Mozart’s Piano Concerto

No. 20. In March, she takes her new recital program on tour in North America, and in April will give three performances of the Schumann Concerto with the Pittsburgh Symphony Orchestra and Manfred Honeck. The season will end with a recital tour based on the Memory repertoire, taking it to venues such as Geneva’s Victoria Hall, the Philharmonie de Paris, the Leipzig Gewandhaus, London’s Barbican Centre, and the Luxembourg Philharmonie.

3/18 Post-Performance Artist Q&A: ANTHEM
(Jam Handy, 2900 E. Grand Boulevard, Detroit)
Must have a ticket to that evening’s performance to attend.