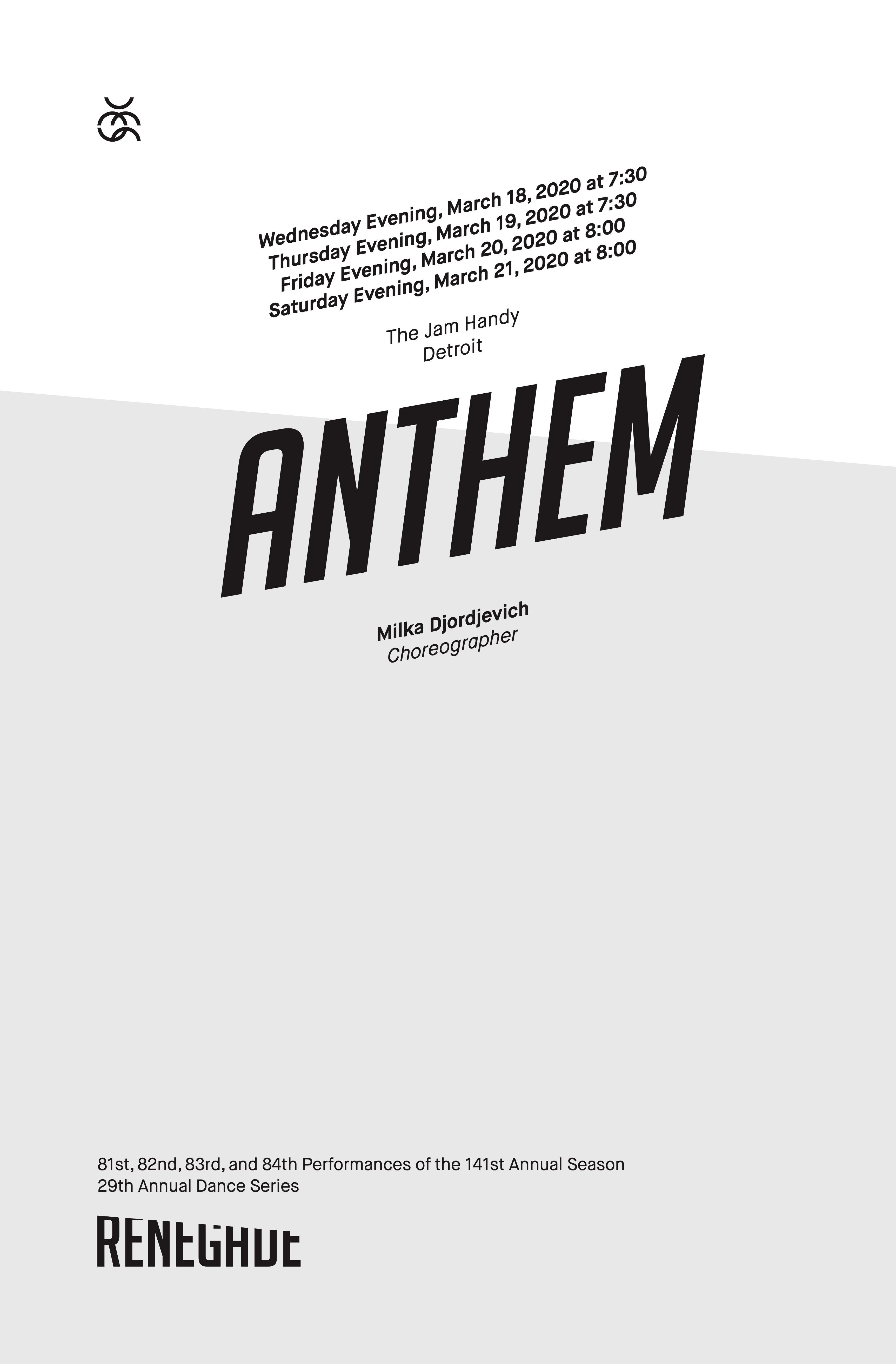 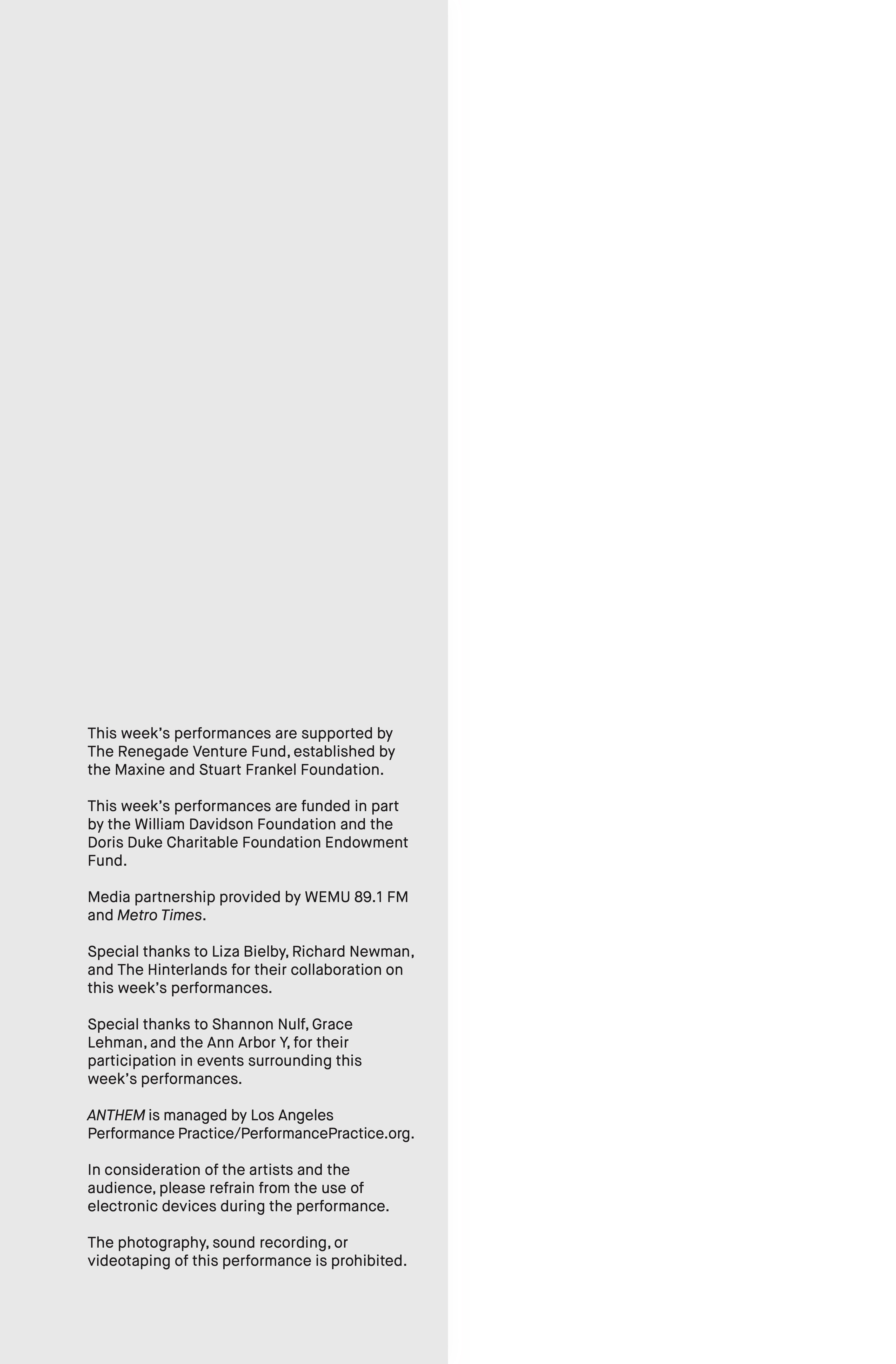 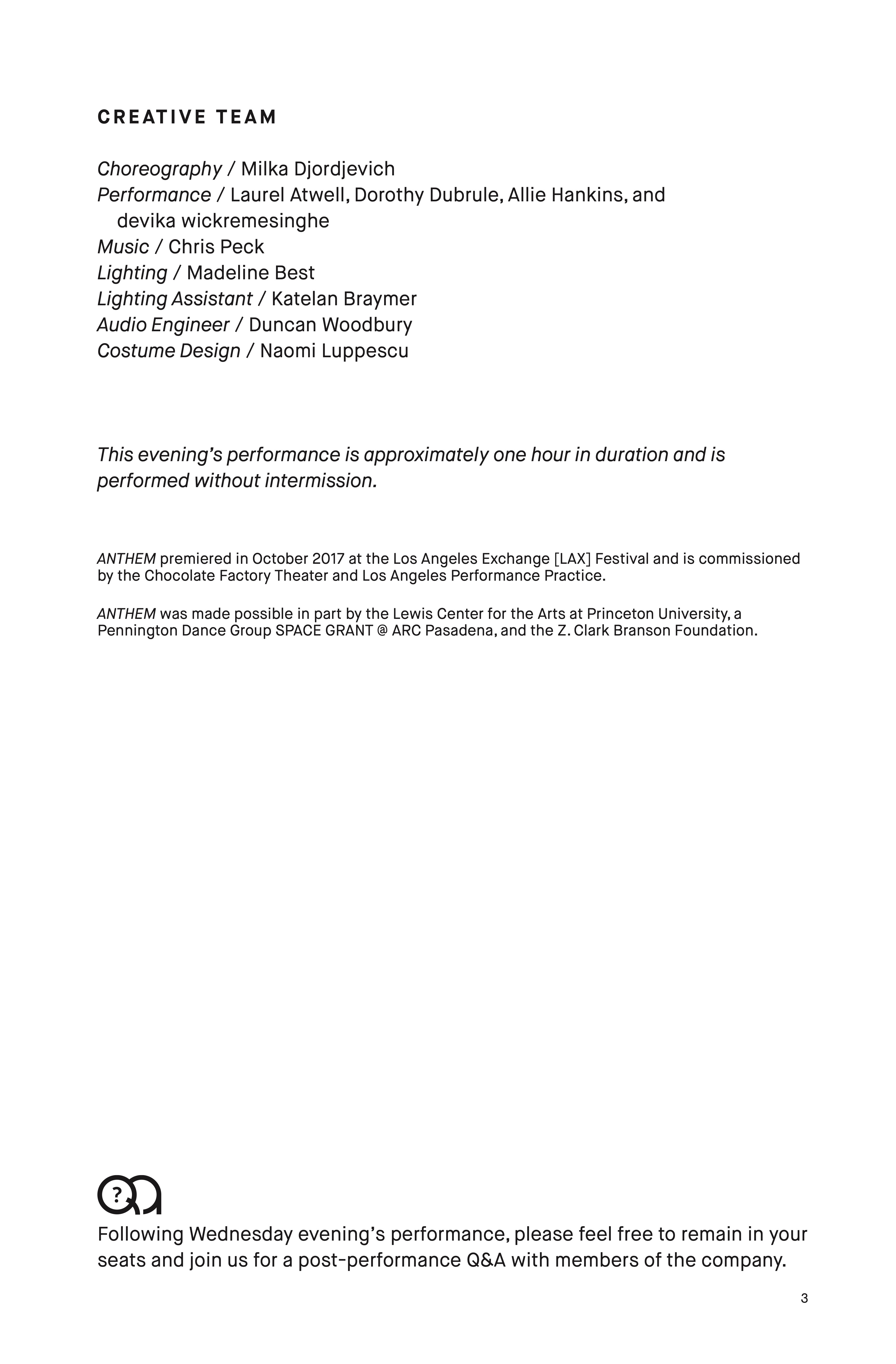 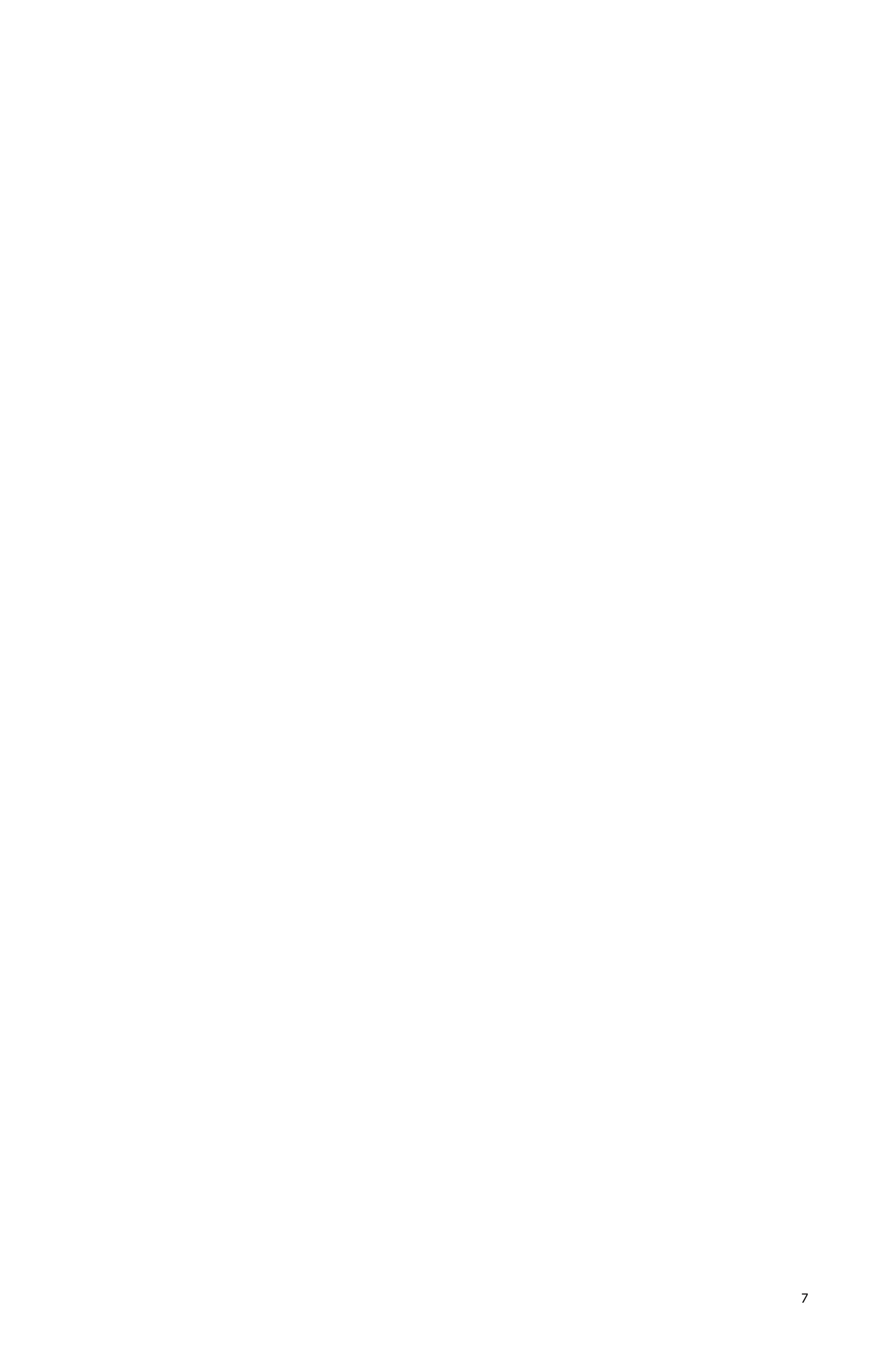 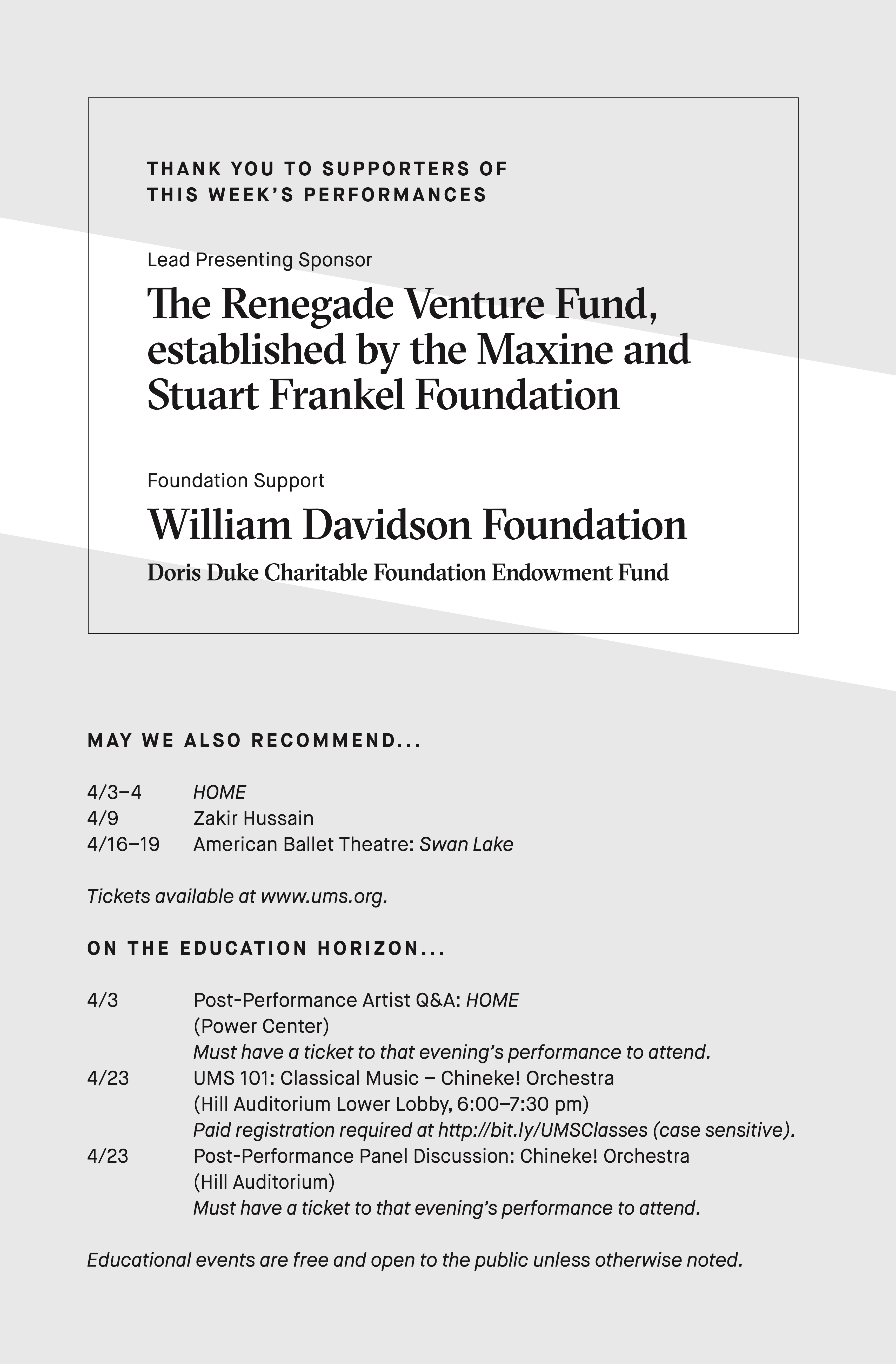 This week’s performances are supported by The Renegade Venture Fund, established by the Maxine and Stuart Frankel Foundation.

This week’s performances are funded in part by the William Davidson Foundation and the Doris Duke Charitable Foundation Endowment Fund.

Special thanks to Liza Bielby, Richard Newman, and The Hinterlands for their collaboration on this week’s performances.

Special thanks to Shannon Nulf, Grace Lehman, and the Ann Arbor Y, for their participation in events surrounding this week’s performances.

This evening’s performance is approximately one hour in duration and is performed without intermission.

ANTHEM premiered in October 2017 at the Los Angeles Exchange [LAX] Festival and is commissioned by the Chocolate Factory Theater and Los Angeles Performance Practice.

ANTHEM was made possible in part by the Lewis Center for the Arts at Princeton University, a Pennington Dance Group SPACE GRANT @ ARC Pasadena, and the Z. Clark Branson Foundation.

Following Wednesday evening’s performance, please feel free to remain in your seats and join us for a post-performance Q&A with members of the company.

Milka Djordjevich (choreographer) is a choreographer, performer, and teacher. Her work draws from a variety of compositional strategies to question preconceived notions of dance, examining the moving female body in the so-called “neutral” space of theater. Ms. Djordjevich’s works include ANTHEM (2017), commissioned

by Los Angeles Performance Practice
and The Chocolate Factory Theater.
In 2013, Ms. Djordjevich created and performed Kinetic Makeover, a solo piece that confers power and autonomy on one body, which premiered at The Chocolate Factory Theater and toured nationally
and internationally. Her long-standing collaborations with composer Chris Peck challenge conventional partnerships between choreographers and composers, rediscovering music as a practice of the body and dance as a mode of listening. Their work MASS (2015) premiered at The Kitchen, with additional performances

as internationally in Austria, France, Germany, Italy, Macedonia, Poland,
Serbia, and the UK. She has served as co- editor for Movement Research’s Critical Correspondence and initiated the Monday Class series at Pieter in Los Angeles. She

is a Foundation for Contemporary Arts Artist Grant recipient (2020) and was
a Princeton University Hodder Fellow (2017–18), a danceWEB Europe Scholar (2008/2010), and a Movement Research Artist-in-Residence (2006–07). She has also held residencies at Maggie Allesee National Center for Choreography;

PACT Zollverien; Fabrik Potsdam; and Workspace Brussels. She has taught
at the American Musical and Dramatic Academy (AMDA), Pomona College, and University of California at Irvine, Riverside and Los Angeles. Ms. Djordjevich received a BA from the University of California, Los Angeles and an MFA from Sarah Lawrence College. In 2016, she established STANA, an organization cultivating local, national, and international dance connections.

Laurel Atwell (performer) has been building performances since 2008 through residencies from chashama,
The Field, Jonah Bokaer Arts Foundation, and Movement Research. She recently presented the trio We Wield as part of Gibney Dance’s DoublePlus series. Like most of her work, We Wield was built from the fascination with how interpersonal relations and non-verbal communication has the potential to break down accepted rules of engagement in order to better support intimate constructions of time. In doing so, does escaping tyranny become possible? Is freedom a goal anymore? Collaborations are a constant in Ms. Atwell’s process: co-choreographing/ performing various worm states with Jessica Cook at PAM and Central Park Gallery in Los Angeles and MoMA PS1’s VW Dome; Holding it Together with Athena Kokoronis/Domestic Performance Agency; and curating and editing the

Dorothy Dubrule (performer) is a choreographer and performer based in Los Angeles. Her choreography is often made in collaboration with people who
do not identify as dancers and has been performed in theaters as well as bars, clubs, galleries, sound stages, and sports arenas. She has performed in the work
of artists, choreographers, and directors such as Alexx Shilling, Alison D’Amato, Lea Anderson, Melinda Ring, Milka Djordjevich, Narcissister, Tino Sehgal, and Zoe Aja Moore. She received an MFA from UCLA’s department of world arts and cultures/ dance and has been the director of Pieter Performance Space since 2017. Prior
to moving to LA, she danced with DIY performance collective Club Lyfestile

and comedy fly-girl crew Body Dreamz
in Philadelphia. A board member of Grex, the West coast affiliate of the AK Rice Institute for the Study of Social Systems, she organizes workshops and writes about issues of social identity and power as they arise in dance contexts. Following the publication of her essay, “What I’m Doing When I’m Selling Out,” on SF MoMA’s Open Space, she is currently working with 53rd State Press to edit a collection of writing by performers who have been contracted by visual arts institutions to work in live exhibitions. For more information, please visit dorothydubrule.com.

Allie Hankins (performer) is a Portland- based dancer, performer, and performance maker. Her current collaborators include Physical Education (Lu Yim, keyon gaskin, and Taka Yamamoto), Linda Austin, and Rachael Dichter (SF). Most recently, Ms. Hankins has danced for Milka Djordjevich (LA) and Morgan Thorson (Minneapolis). She has been an artist in residence at Headlands Center for the Arts, the Djerassi Resident Artist Program, the Robert Rauschenberg Residency, Caldera, the Wassaic Project, and will be in residence at Ucross in April/May 2020. She’s currently reading Zany, Cute, Interesting by Sianne Ngai, Calamities by Renee Gladman, all the Ali Smith she can get her hands on, and she is eagerly awaiting her turn on the library’s waitlist for In the Dream House by Carmen Maria Machado. She loves book recommendations.

Naomi Luppescu (costume design) is a New York City-based costume designer. She received her BFA in dance from SUNY Purchase and as a dancer she always

felt a great need for costumes that were

Chris Peck (music) is a composer, computer musician, and improviser who often collaborates with contemporary dance and theater. His recent music theater work with Eleanor Bauer, New Joy, premiered at Schauspielhaus Bochum and the Kunstenfestivaldesarts in 2019. Mr. Peck also performs as an improviser with Jon Moniaci and Stephen Rush under the name Crystal Mooncone. The trio’s fifth album, Listening Beam Five, is available from Innova Recordings. Mr. Peck lives
in Berlin, where he works as a software developer at Ableton.

PerformancePractice.org is the national touring extension of Los Angeles Performance Practice, a non-profit

organization devoted to the production and presentation of contemporary performance by artists whose work advances and challenges multidisciplinary artistic practices. Founded by Miranda Wright in 2010, its mission is to support a unique

and diverse constellation of artists and audiences through the active creation and presentation of groundbreaking experiences that use innovative approaches to collaboration, technology, and social engagement. Anchored in Los Angeles, its artists and projects have national and global reach.

Built in 1919 as the Maranatha Baptist Tabernacle, The Jam Handy building was converted into a commercial film studio in the late-1920s by Henry Jamison (“Jam”)Handy. His advertising firm — first called the Jam Handy Picture Service, later the Jam Handy Organization — quickly became one of the largest industrial film productioncompanies in the world, producing advertisements and instructional videos for hundreds of clients, including General Motors/Chevrolet, AT&T, Westinghouse, Montgomery Ward, and the US military. While the studio closed in the late 1970s, and the building re-purposed into a home for the televised evangelical church, Faith for Miracles, thousands of the original films were rescued and later digitized and are accessible via YouTube and the Internet Archive. The building continued to house a series of churches throughout the 1990s, but by the early 2000s was abandoned. In 2011 it was purchased in the Wayne County tax auction and began its current use as

an events venue, with an emphasis on community and art-related projects.

UMS welcomes the company of ANTHEM as they make their UMS debuts this week.

THANK YOU TO SUPPORTERS OF THIS WEEK’S PERFORMANCES

The Renegade Venture Fund, established by the Maxine and Stuart Frankel Foundation