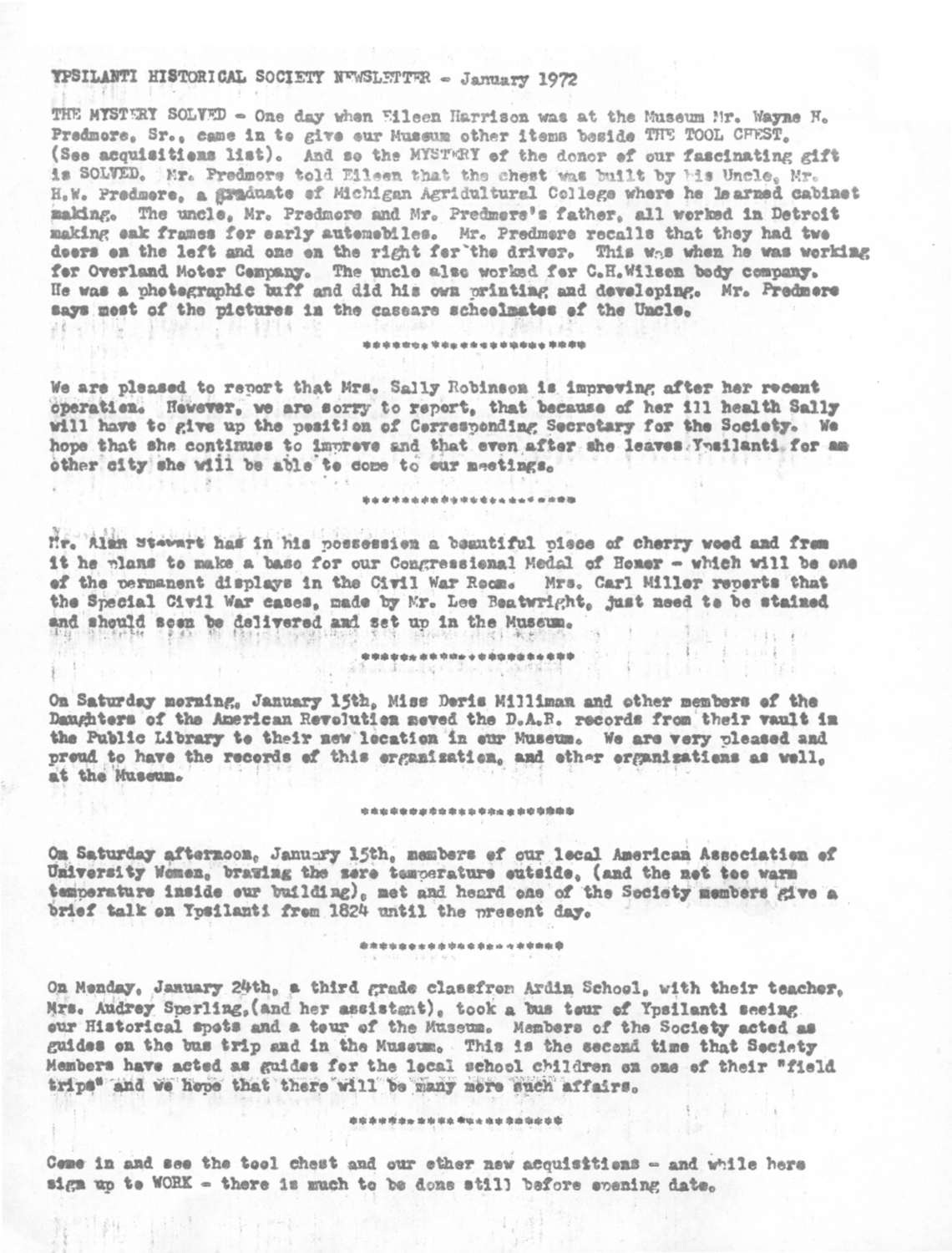 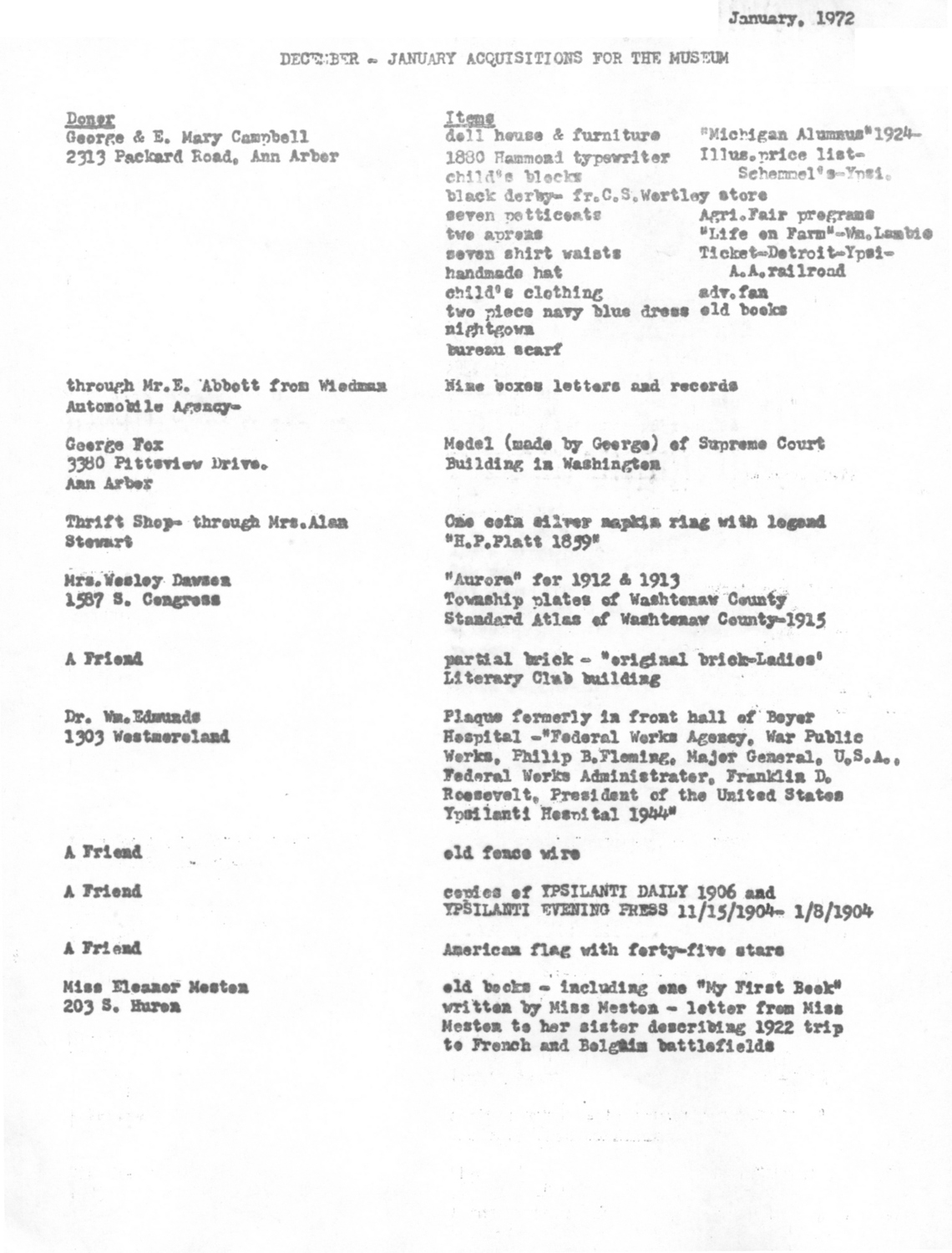 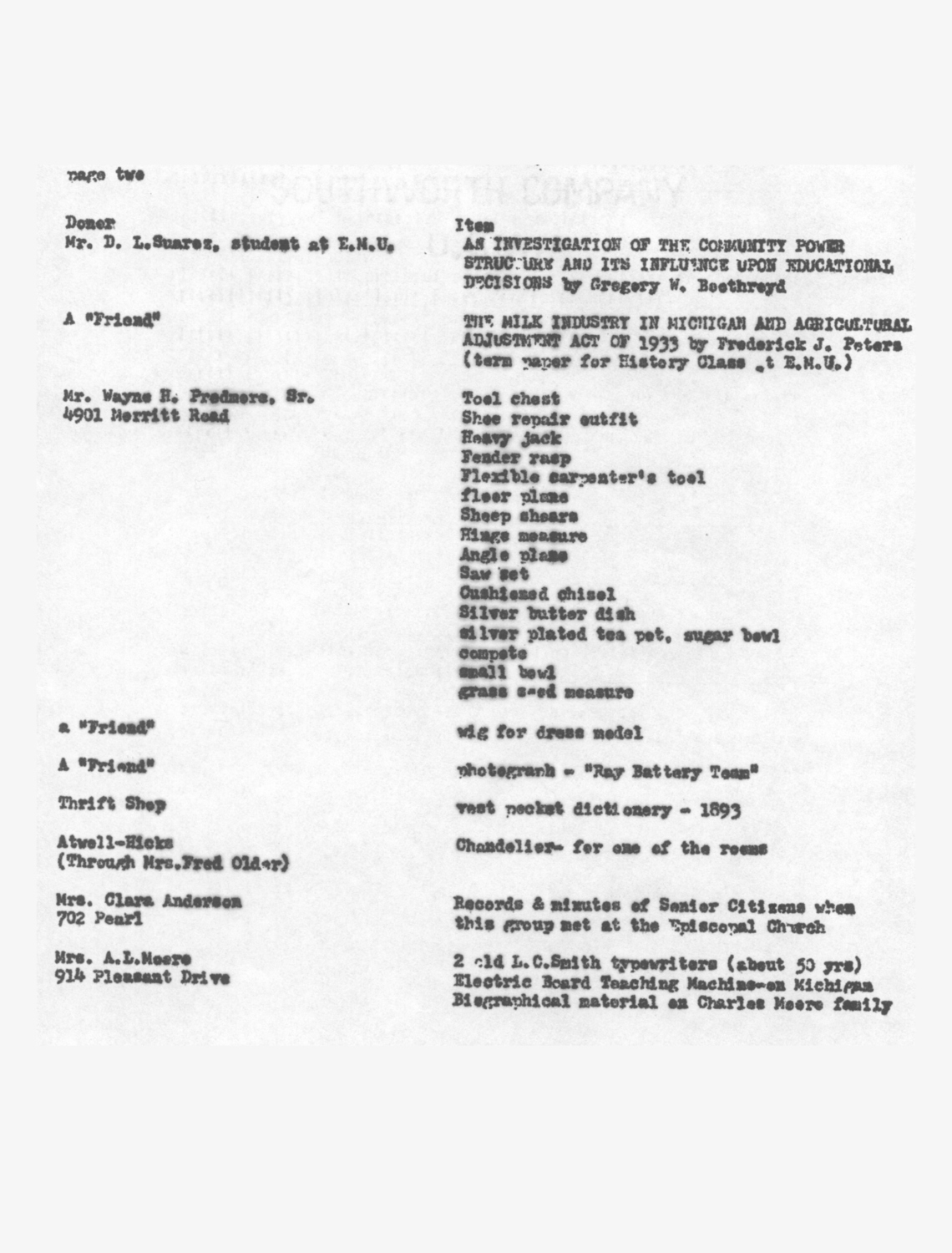 THE MYSTERY SOLVED-One day when Eileen Harrison was at the Museum Mr. Wayne H. Predmore, Sr., came in to give our Museum other items beside THS TOOL CHEST. (See acquisitions list). And so the MYSTERY of the donor of our fascinating gift is SOLVED. Mr. Predmore told Eileen that the chest was built by his Uncle, Mr. H.W. Predmore, a graduate of Michigan Agricultural College where he learned cabinet making. The uncle, Mr. Predmore and Mr. Predmore's father, all worked in Detroit making oak frames for early automobiles. Mr. Predmore recalls that they had two deers on the left and one on the right for the driver. This was when he was working for Overland Motor Company. The uncle also worked for C.H. Wilson body company. He was a photographic buff and did his own printing and developing. Mr. Predmore says most of the pictures in the caseare schoolmates of the Uncle.

We are pleased to report that Mrs. Sally Robinson is improving after her recent operation. However, we are sorry to report, that because of her ill health Sally will have to give up the position of Corresponding Secretary for the Society. We hope that she continues to improve and that even after she leaves Ypsilanti for as other city she will be able to come to our meetings.

Mr. Alan Stewart has in is possession a beautiful piece of cherry wood and from it he plans to make a base for our Congressional Medal of Homer-which will be one of the permanent displays in the Civil War Room. Mrs. Carl Miller reports that the Special Civil War cases, made by Mr. Lee Boatwright. Just need to be stained and should soon be delivered and set up in the Museum.

On Saturday morning, January 15th, Miss Doris Milliman and other members of the Daughters of the American Revolution moved the D.A.R. records from their vault in the Public Library to their new location in our Museum. We are very pleased and proud to have the records of this organisation, and other organisations as well, at the Museum.

On Saturday afternoon, January 15th, members of our local American Association of University Women, braving the sere temperature outside, (and the not too warm temperature inside our building), met and heard one of the Society members give a brief talk on Ypsilanti from 1824 until the present day.

On Monday, January 24th, a third grade classfrom Ardin School, with their teacher, Mrs. Audrey Sperling, (and her assistant), took a bus tour of Ypsilanti seeing our Historical spots and a tour of the Museum. Members of the Society acted as guides on the bus trip and in the Museum. This is the second time that Society Members have acted as guides for the local school children on one of their “field trip” and we hope that there will be many more such affairs.

Come in and see the tool chest and our other new acquisitions-and while hers sign up to WORK-there is much to be done still before evening date.

December - January Acquisitions for the Museum