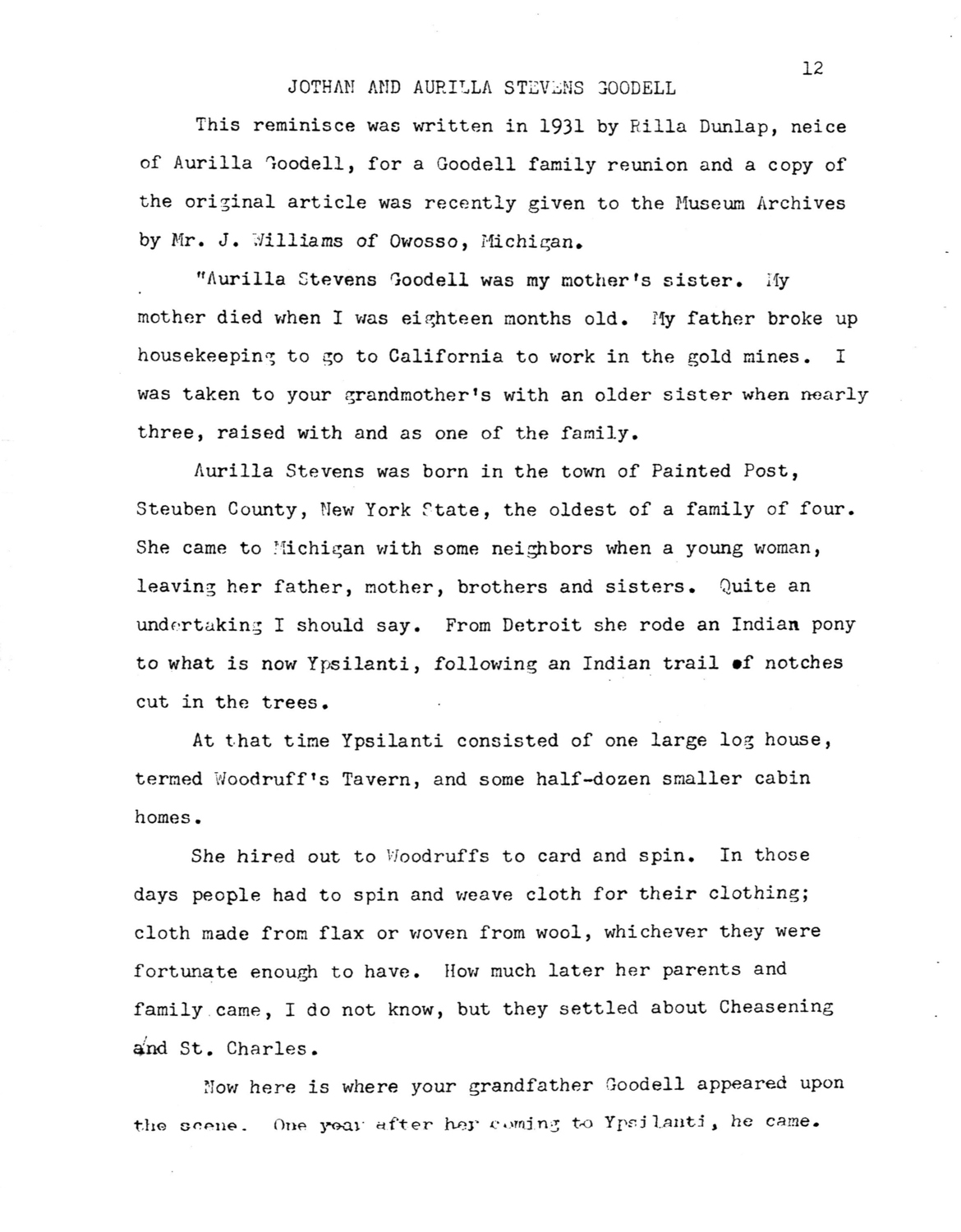 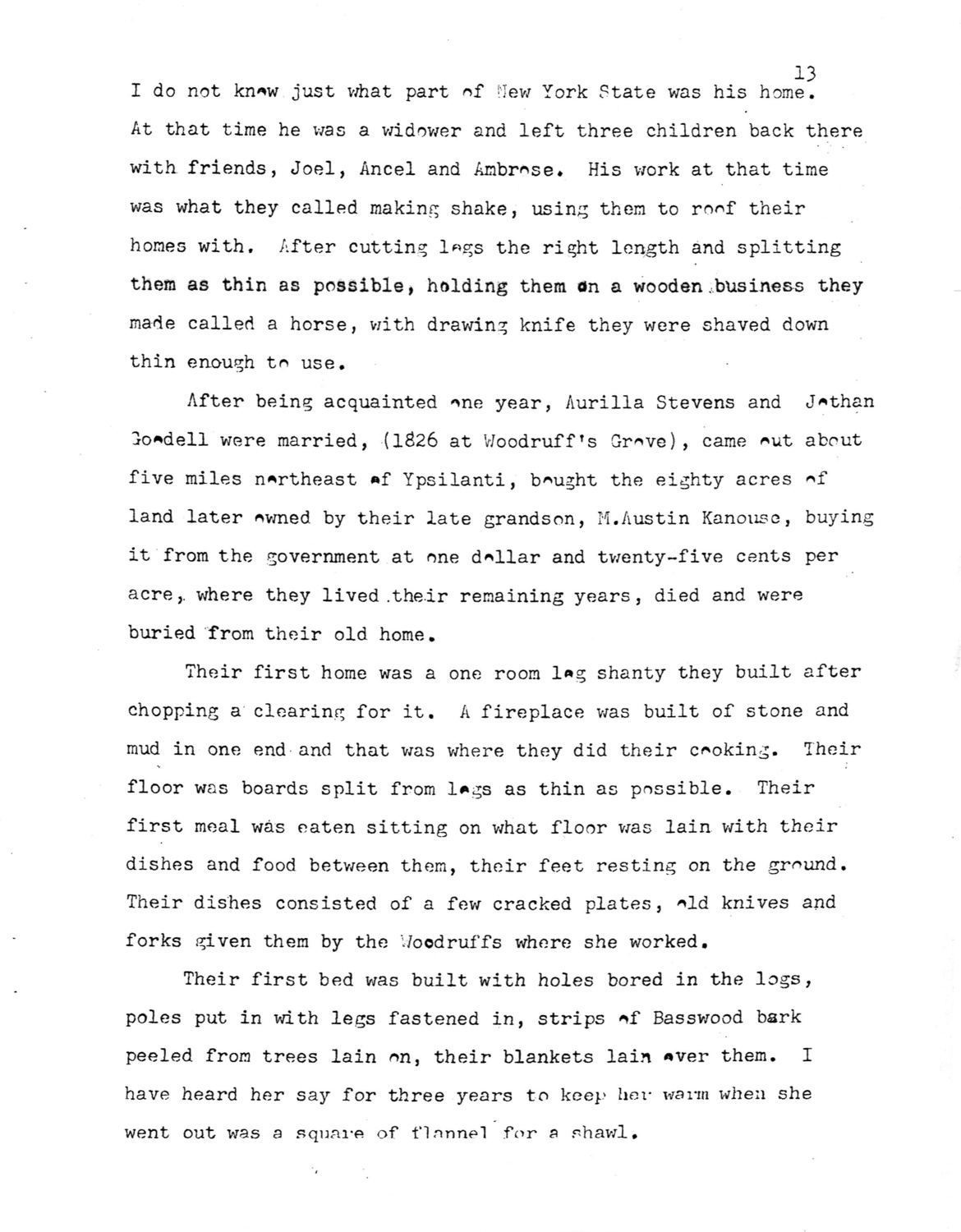 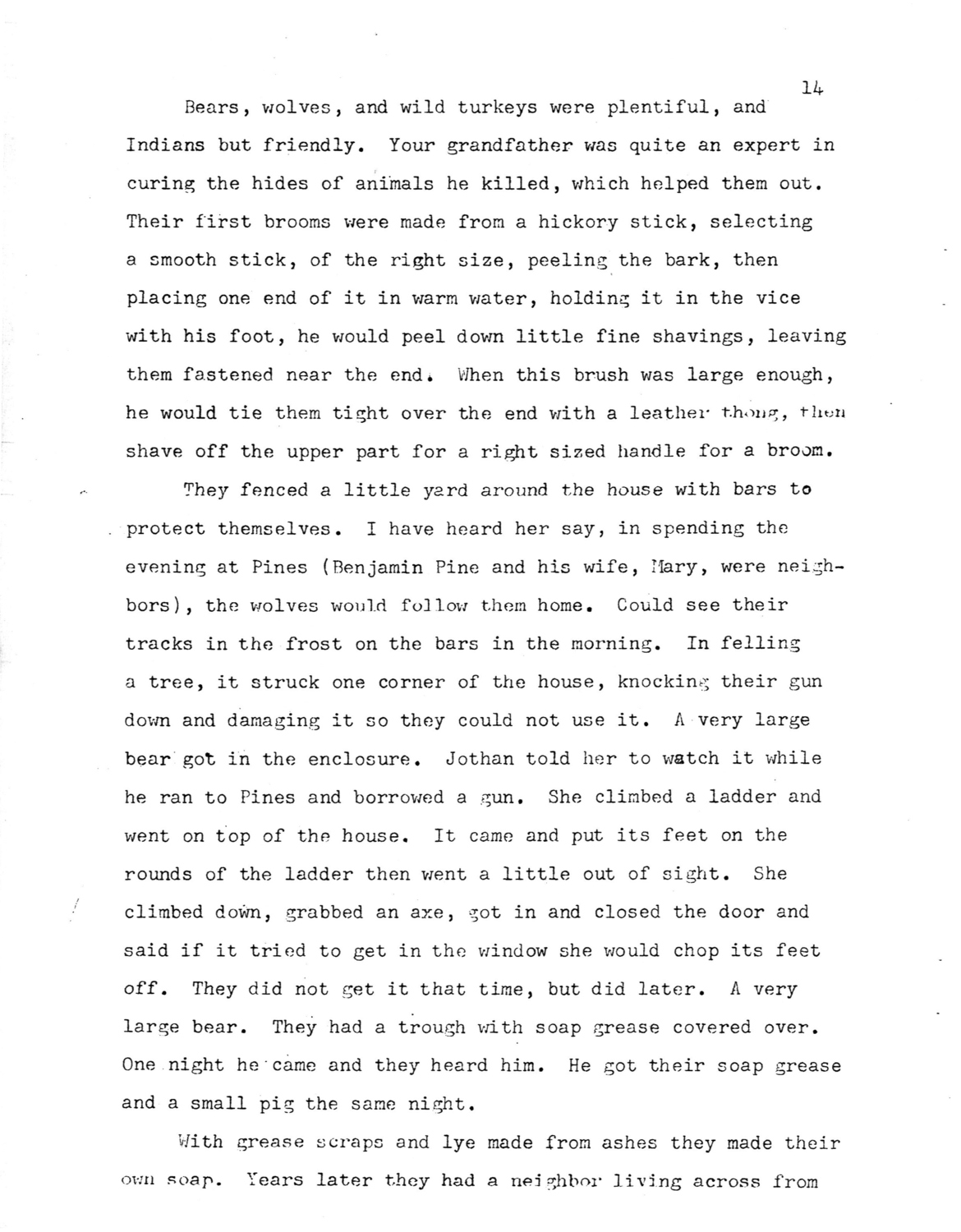 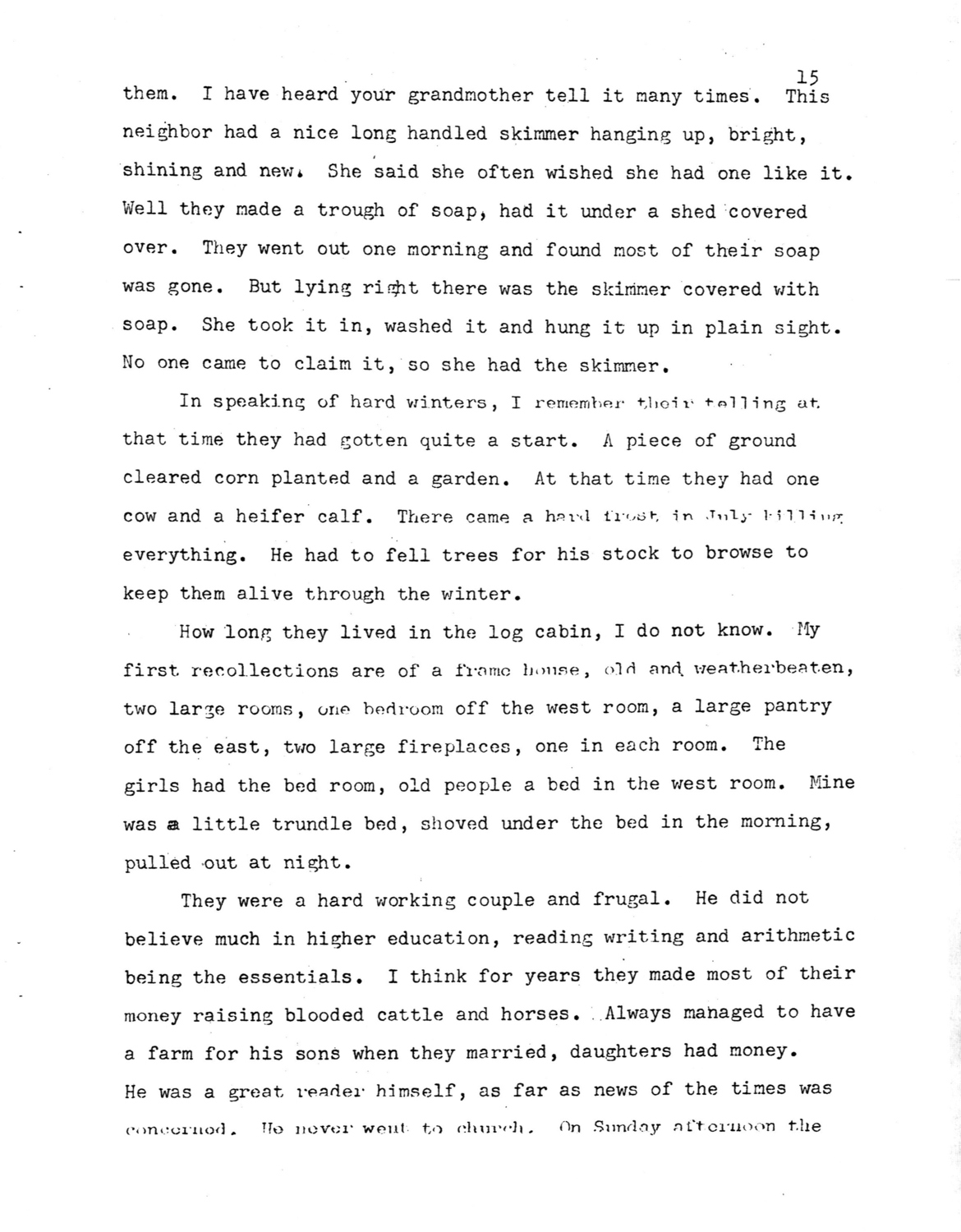 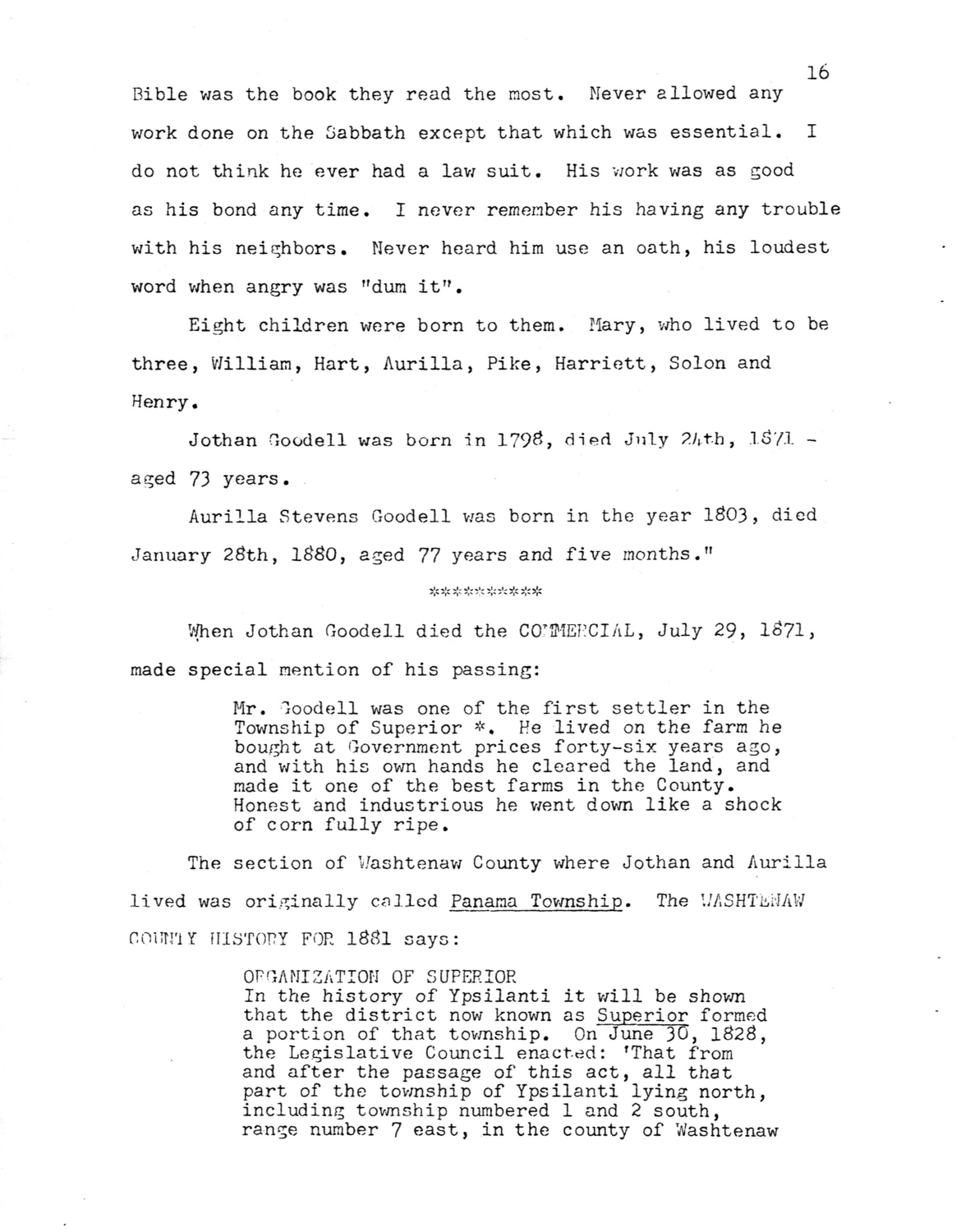 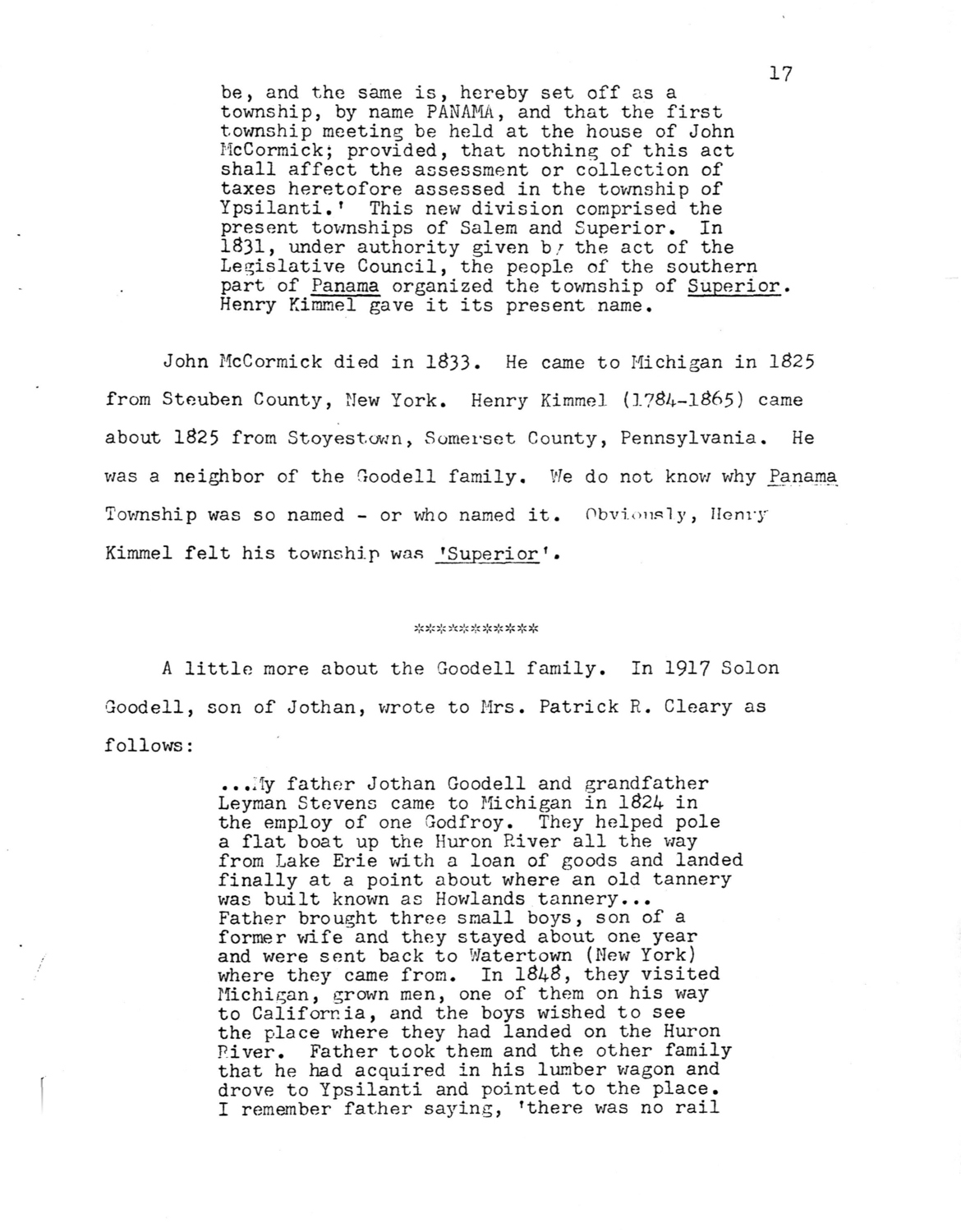 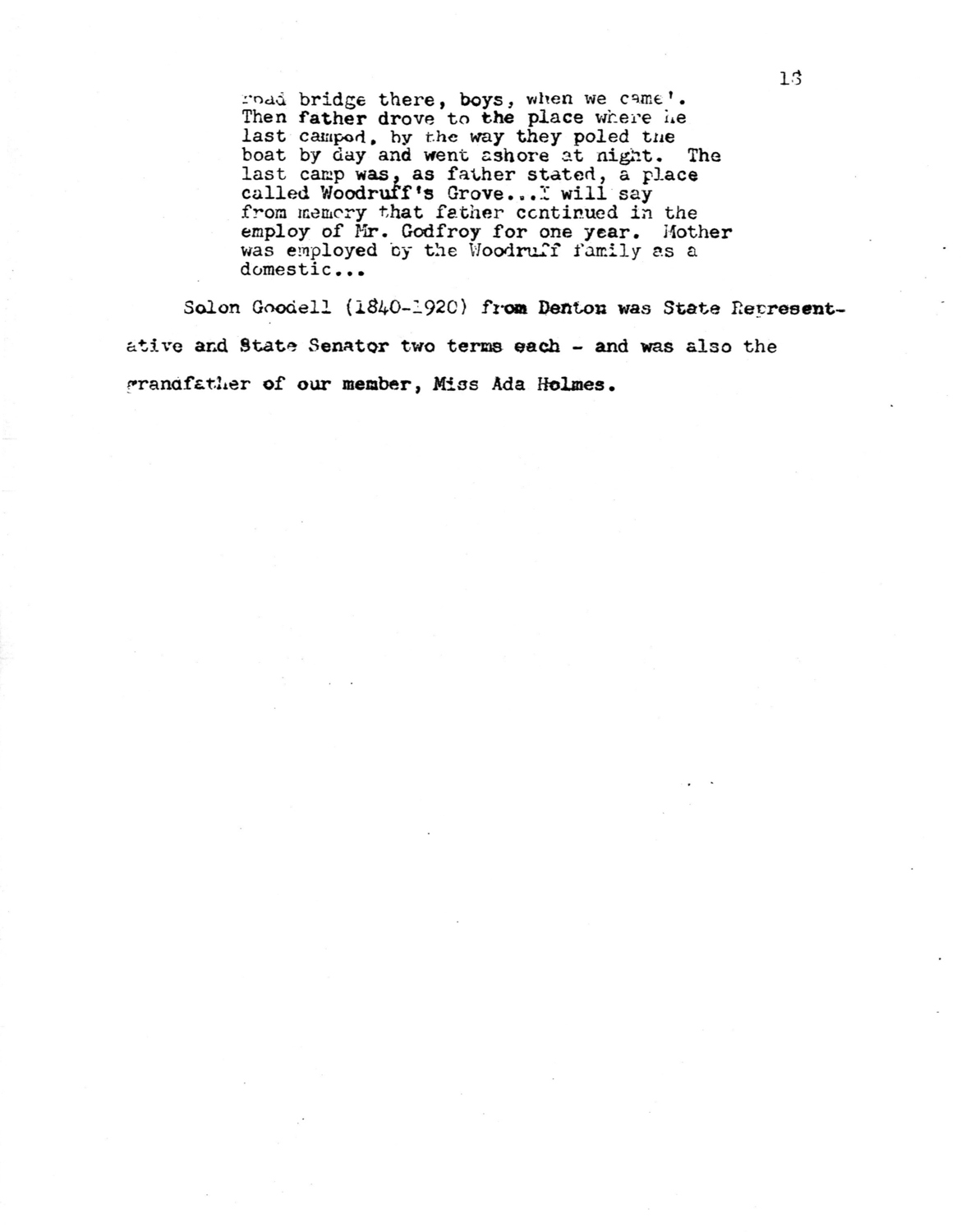 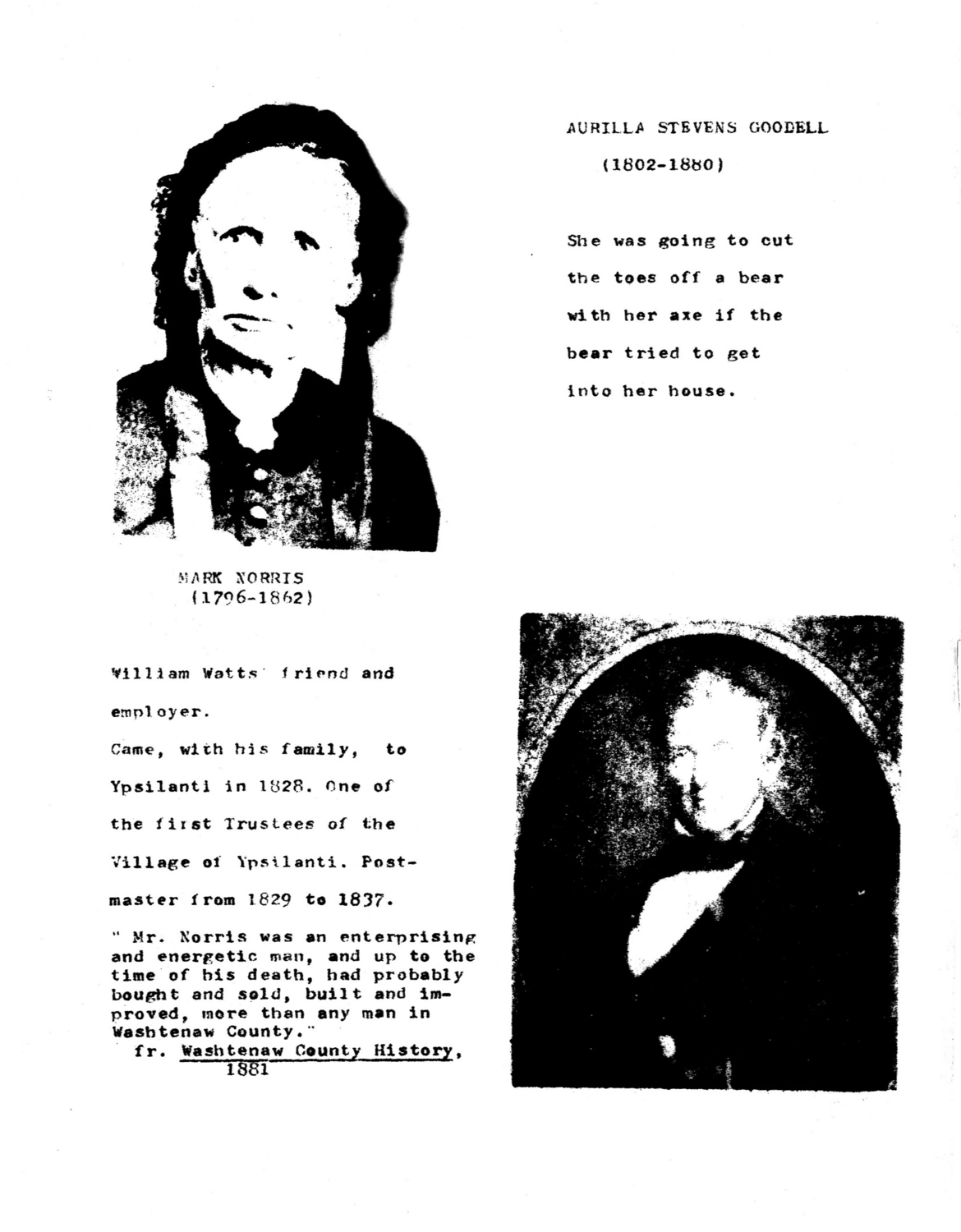 This reminisce was written in 1931 by Rilla Dunlap, neice of Aurilla Goodell, for a Goodell family reunion and a copy of the original article was recently given to the Museum Archives by Mr. J. Williams of Owosso, Michigan.

“Aurilla Stevens Goodell was my mother's sister. My mother died when I was eighteen months old. My father broke up housekeeping to go to California to work in the gold mines. I was taken to your grandmother's with an older sister when nearly three, raised with and as one of the family.

Aurilla Stevens was born in the town of Painted Post, Steuben County, New York State, the oldest of a family of four. She came to Michigan with some neighbors when a young woman, leaving her father, mother, brothers and sisters. Quite an undertaking I should say. From Detroit she rode an Indian pony to what is now Ypsilanti, following an Indian trail of notches cut in the trees.

At that time Ypsilanti consisted of one large log house, termed Woodruff's Tavern, and some half-dozen smaller cabin homes.

She hired out to Woodruffs to card and spin. In those days people had to spin and weave cloth for their clothing; cloth made from flax or woven from wool, whichever they were fortunate enough to have. How much later her parents and family came, I do not know, but they settled about Cheasening and St. Charles.

Now here is where your grandfather Goodell appeared upon the scene. One year after her coming to Ypsilanti, he came. I do not know just what part of New York State was his home. At that time he was a widower and left three children back there with friends, Joel, Ancel and Ambrose. His work at that time was what they called making shake, using them to roof their homes with. After cutting legs the right length and splitting them as thin as possible, holding them on a wooden business they made called a horse, with drawing knife they were shaved down thin enough to use.

After being acquainted one year, Aurilla Stevens and Jothan Goodell were married, (1826 at Woodruff's Grove), came out about five miles northeast of Ypsilanti, bought the eighty acres of land later owned by their late grandson, M.Austin Kanouse, buying it from the government at one dollar and twenty-five cents per acre, where they lived their remaining years, died and were buried from their old home.

Their first home was a one room log shanty they built after chopping a clearing for it. A fireplace was built of stone and mud in one end and that was where they did their cooking. Their floor was boards split from logs as thin as possible. Their first meal was eaten sitting on what floor was lain with their dishes and food between them, their feet resting on the ground. Their dishes consisted of a few cracked plates, old knives and forks given them by the Woodruffs where she worked.

Their first bed was built with holes bored in the logs, poles put in with legs fastened in, strips of Basswood bark peeled from trees lain on, their blankets lain over them. I have heard her say for three years to keep hot warm when she went out was a square of flannel for a shawl.

Bears, wolves, and wild turkeys were plentiful, and Indians but friendly. Your grandfather was quite an expert in curing the hides of animals he killed, which helped them out. Their first brooms were made from a hickory stick, selecting a smooth stick, of the right size, peeling the bark, then placing one end of it in warm water, holding it in the vice with his foot, he would peel down little fine shavings, leaving them fastened near the end. When this brush was large enough, he would tie them tight over the end with a leather thong, then shave off the upper part for a right sized handle for a broom.

They fenced a little yard around the house with bars to protect themselves. I have heard her say, in spending the evening at Pines (Benjamin Pine and his wife, Mary, were neighbors), the wolves would follow them home. Could see their tracks in the frost on the bars in the morning. In felling a tree, it struck one corner of the house, knocking their gun down and damaging it so they could not use it. A very large bear got in the enclosure. Jothan told her to watch it while he ran to Pines and borrowed a gun. She climbed a ladder and went on top of the house. It came and put its feet on the rounds of the ladder then went a little out of sight. She climbed down, grabbed an axe, got in and closed the door and said if it tried to get in the window she would chop its feet off. They did not get it that time, but did later. A very large bear. They had a trough with soap grease covered over. One night he came and they heard him. He got their soap grease and a small pig the same night.

With grease scraps and lye made from ashes they made their own soap. Years later they had a neighbor living across from them. I have heard your grandmother tell it many times. This neighbor had a nice long handled skimmer hanging up, bright, shining and new. She said she often wished she had one like it. Well they made a trough of soap, had it under a shed covered over. They went out one morning and found most of their soap was gone. But lying right there was the skimmer covered with soap. She took it in, washed it and hung it up in plain sight. No one came to claim it, so she had the skimmer.

In speaking of hard winters, I remember their telling at. that time they had gotten quite a start. A piece of ground cleared corn planted and a garden. At that time they had one cow and a heifer calf. There came a hard frost in July killing. everything. He had to fell trees for his stock to browse to keep them alive through the winter.

How long they lived in the log cabin, I do not know. My first recollections are of a frame house, old and weatherbeaten, two large rooms, one bedroom off the west room, a large pantry off the east, two large fireplaces, one in each room. The girls had the bed room, old people a bed in the west room. Mine was a little trundle bed, shoved under the bed in the morning, pulled out at night.

They were a hard working couple and frugal. He did not believe much in higher education, reading writing and arithmetic being the essentials. I think for years they made most of their money raising blooded cattle and horses. Always managed to have a farm for his sons when they married, daughters had money.

He was a great reader himself, as far as news of the times was concerned. He never went to church. On Sunday afternoon the Bible was the book they read the most. Never allowed any work done on the Sabbath except that which was essential. I do not think he ever had a law suit. His work was as good as his bond any time. I never remember his having any trouble with his neighbors. Never heard him use an oath, his loudest word when angry was “dum it”.

Eight children were born to them. Mary, who lived to be three, William, Hart, Aurilla, Pike, Harriett, Solon and Henry.

When Jothan Goodell died the COMMERCIAL, July 29, 1871, made special mention of his passing:

Mr. Goodell was one of the first settler in the Township of Superior *. He lived on the farm he bought at Government prices forty-six years ago, and with his own hands he cleared the land, and made it one of the best farms in the County. Honest and industrious he went down like a shock of corn fully ripe.

The section of Washtenaw County where Jothan and Aurilla lived was originally called Panama Township. The WASHTENAW COUNTY HISTORY FOR 1881 says:

In the history of Ypsilanti it will be shown that the district now known as Superior formed a portion of that township. On June 30, 1828, the Legislative Council enacted: 'That from and after the passage of this act, all that part of the township of Ypsilanti lying north, including township numbered 1 and 2 south, range number 7 east, in the county of Washtenaw be, and the same is, hereby set off as a township, by name PANAMA, and that the first township meeting be held at the house of John McCormick; provided, that nothing of this act shall affect the assessment or collection of taxes heretofore assessed in the township of Ypsilanti.! This new division comprised the present townships of Salem and Superior. In 1831, under authority given by the act of the Legislative Council, the people of the southern part of Panama organized the township of Superior. Henry Kimmel gave it its present name.

John McCormick died in 1833. He came to Michigan in 1825 from Steuben County, New York. Henry Kimmel (1784–1865) came about 1825 from Stoyestown, Somerset County, Pennsylvania. He was a neighbor of the Goodell family. We do not know why Panama Township was so named-or who named it. Obviously, Henry Kimmel felt his township was ‘Superior'.

A little more about the Goodell family. In 1917 Solon Goodell, son of Jothan, wrote to Mrs. Patrick R. Cleary as follows:

…My father Jothan Goodell and grandfather Leyman Stevens came to Michigan in 1824 in the employ of one Godfroy. They helped pole a flat boat up the Huron River all the way from Lake Erie with a loan of goods and landed finally at a point about where an old tannery was built known as Howlands tannery… Father brought three small boys, son of a former wife and they stayed about one year and were sent back to Watertown (New York) where they came from. In 1848, they visited Michigan, grown men, one of them on his way to California, and the boys wished to see the place where they had landed on the Huron River. Father took them and the other family that he had acquired in his lumber wagon and drove to Ypsilanti and pointed to the place. I remember father saying, ‘there was no rail road bridge there, boys, when we came'. Then father drove to the place where he last camped. by the way they poled the boat by day and went ashore at night. The last camp was, as father stated, a place called Woodruff's Grove… I will say from memory that father continued in the employ of Mr. Godfroy for one year. Mother was employed by the Woodruff family as a domestic…

Solon Goodell (1840–1920) from Denton was State Representative and State Senator two terms each-and was also the grandfather of our member, Miss Ada Holmes.

“Mr. Norris was an enterprising and energetic man, and up to the time of his death, had probably bought and sold, built and improved, more than any man in Washtenaw County.”

She was going to cut the toes off a bear with her axe if the bear tried to get into her house.