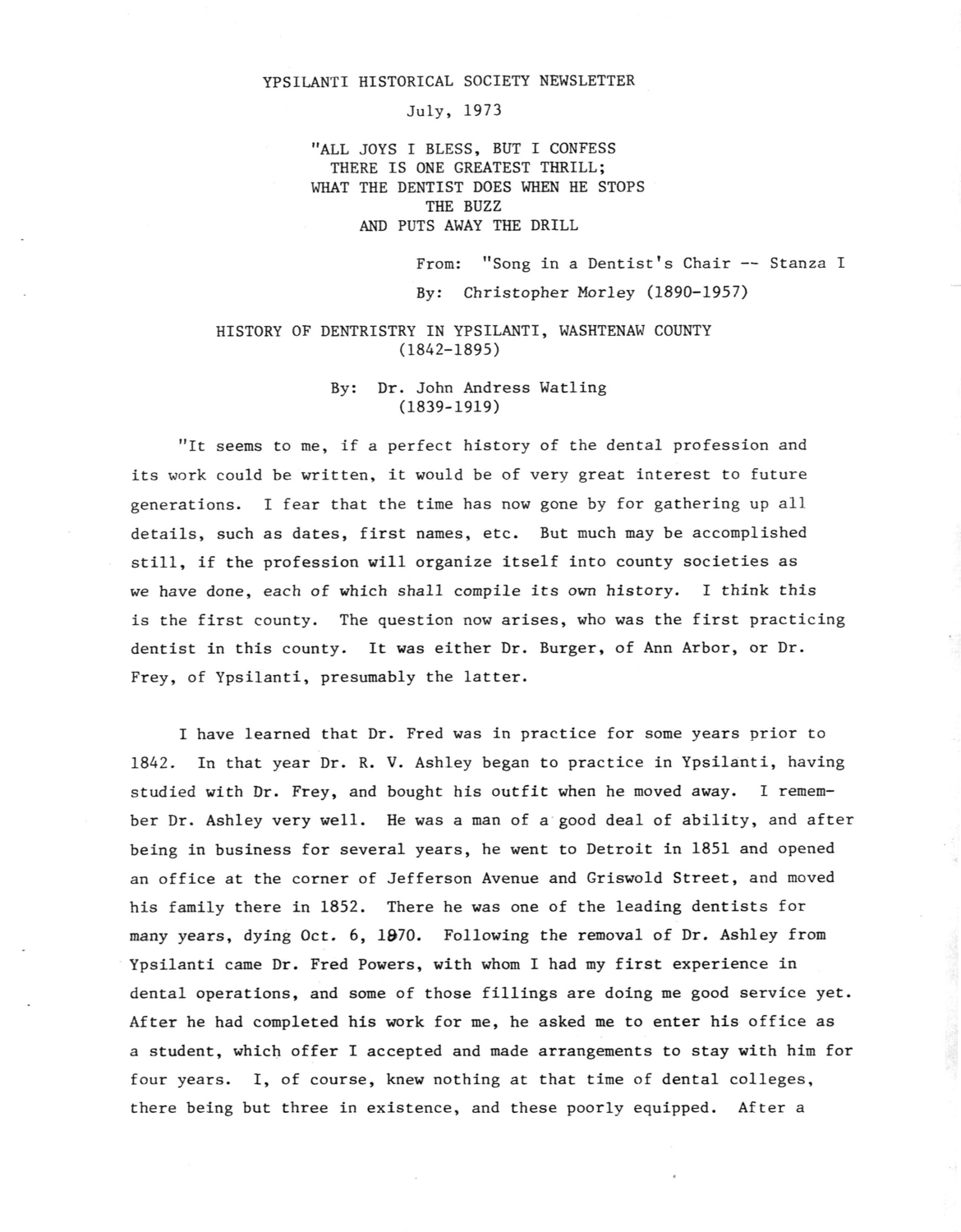 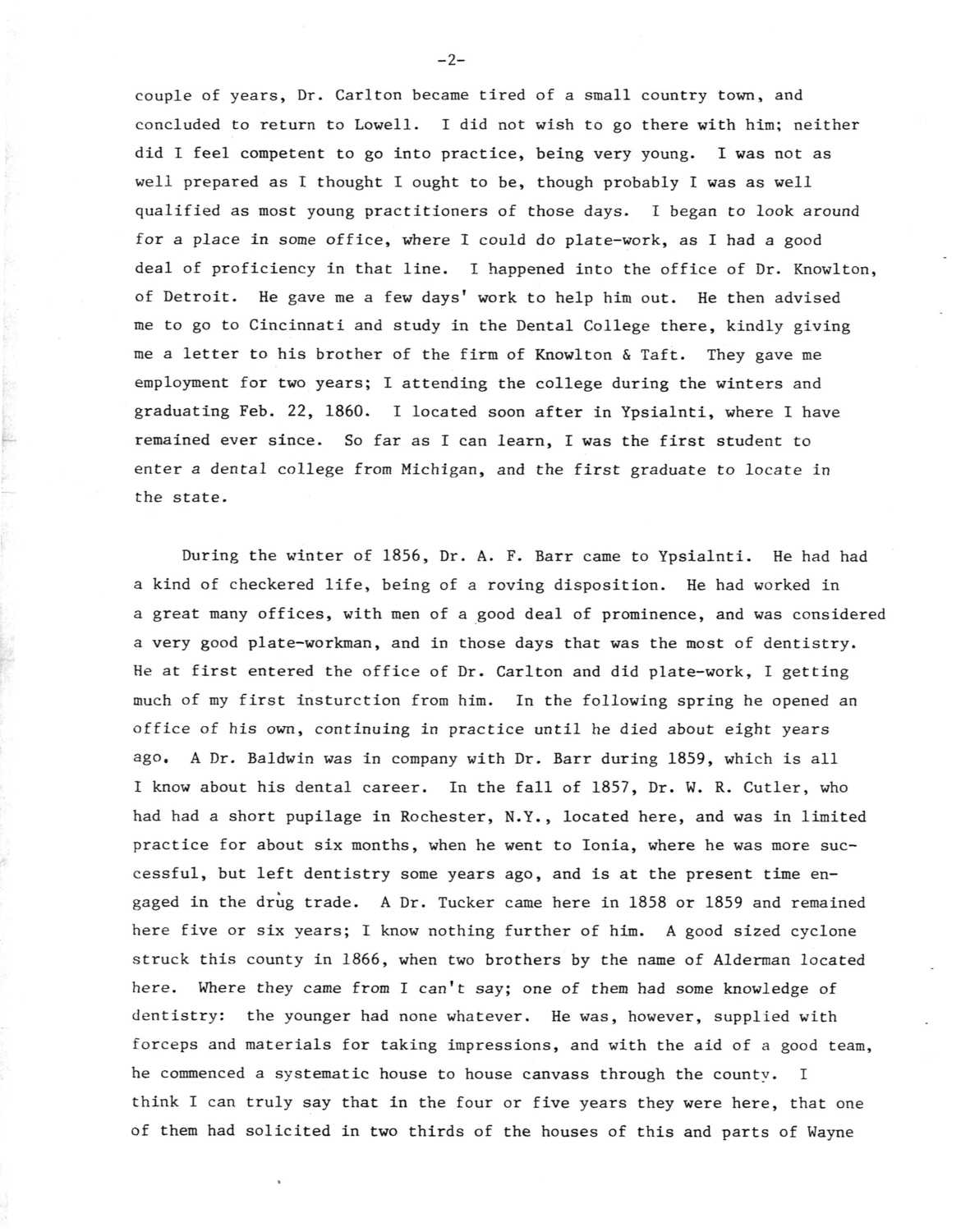 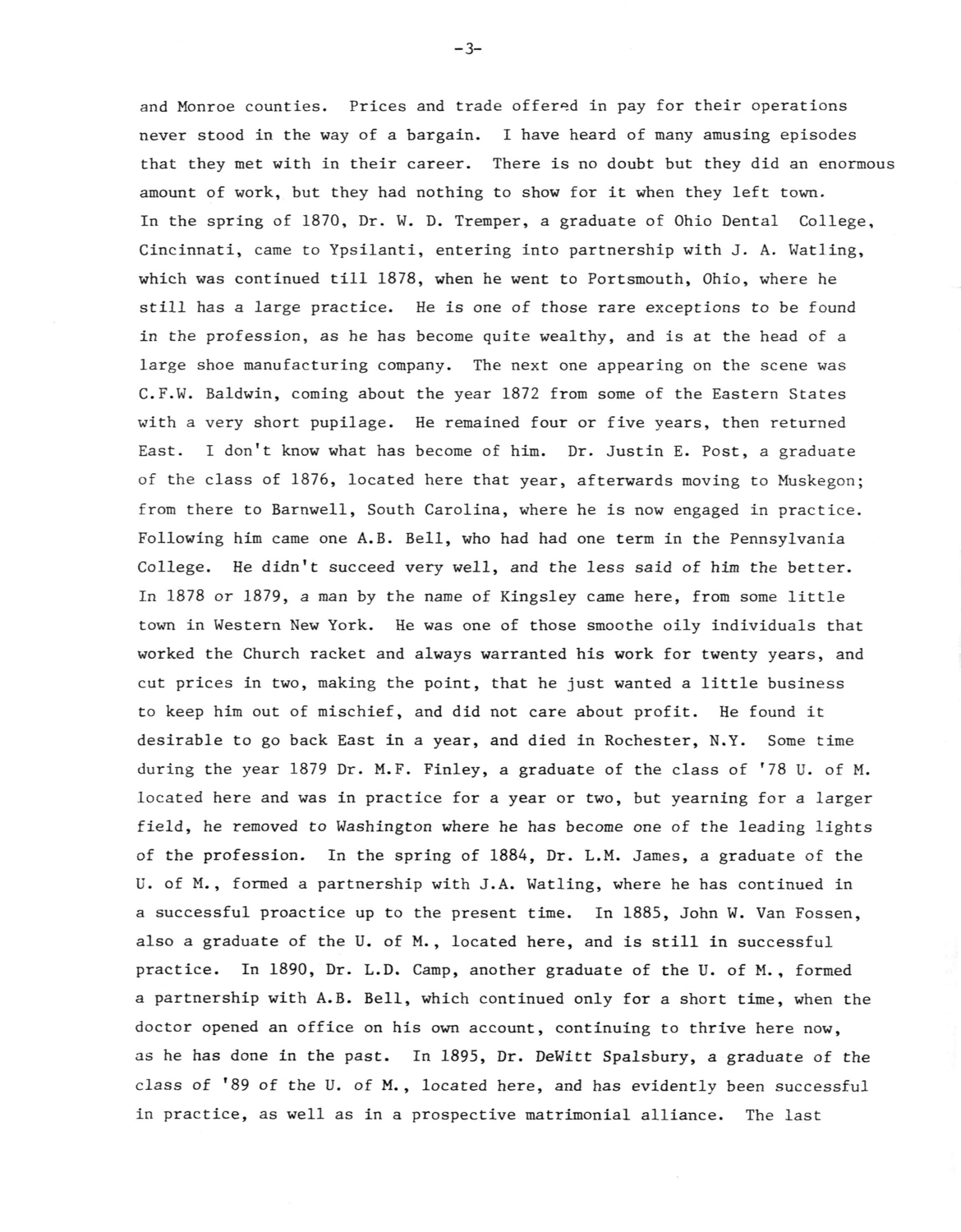 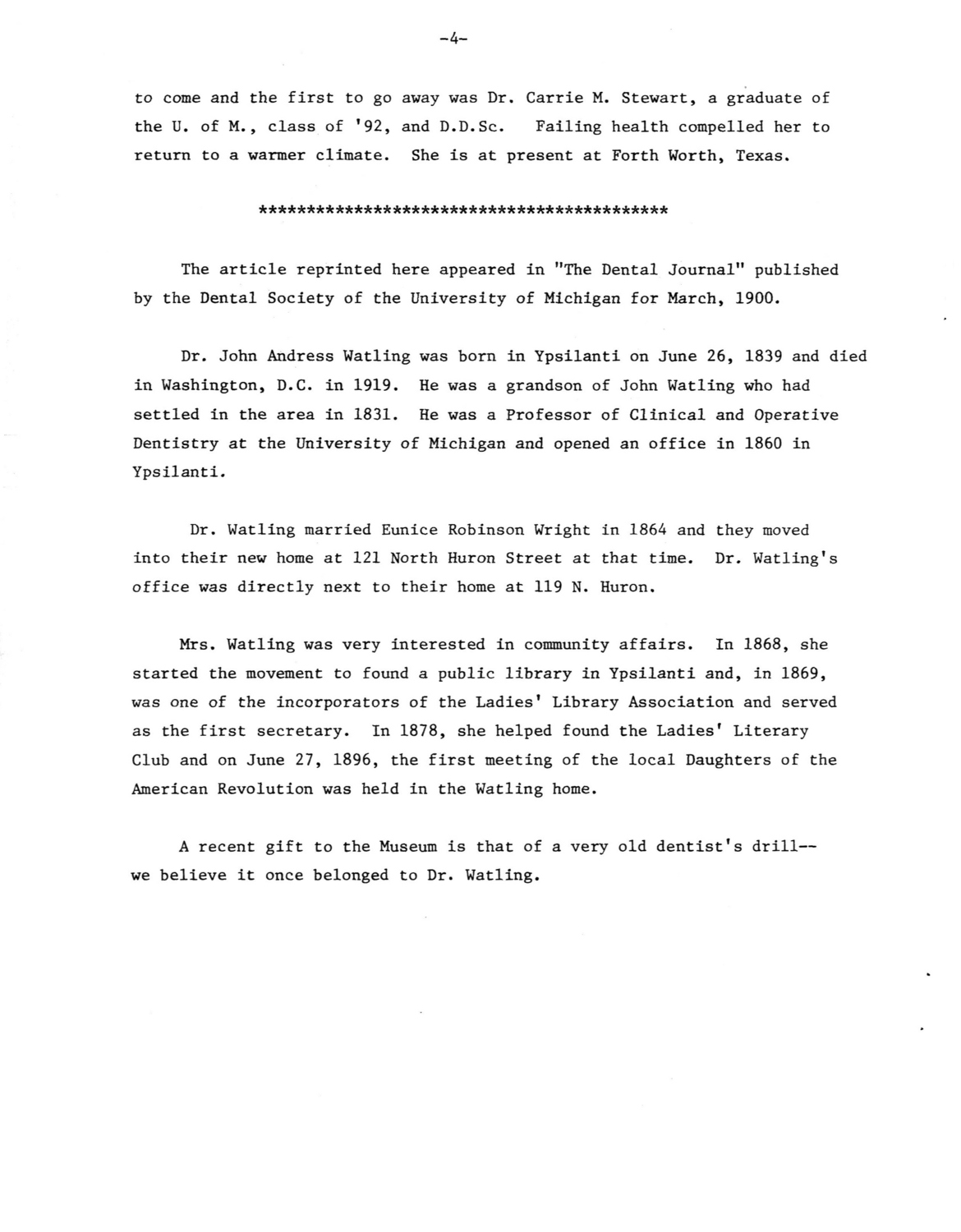 “ALL JOYS I BLESS, BUT I CONFESS
THERE IS ONE GREATEST THRILL;
WHAT THE DENTIST DOES WHEN HE STOPS
THE BUZZ
AND PUTS AWAY THE DRILL

From: “Song in a Dentist's Chair — Stanza I

“It seems to me, if a perfect history of the dental profession and its work could be written, it would be of very great interest to future generations. I fear that the time has now gone by for gathering up all details, such as dates, first names, etc. But much may be accomplished still, if the profession will organize itself into county societies as we have done, each of which shall compile its own history. I think this is the first county. The question now arises, who was the first practicing dentist in this county. It was either Dr. Burger, of Ann Arbor, or Dr. Frey, of Ypsilanti, presumably the latter.

I have learned that Dr. Fred was in practice for some years prior to 1842. In that year Dr. R. V. Ashley began to practice in Ypsilanti, having studied with Dr. Frey, and bought his outfit when he moved away. I remember Dr. Ashley very well. He was a man of a good deal of ability, and after being in business for several years, he went to Detroit in 1851 and opened an office at the corner of Jefferson Avenue and Griswold Street, and moved his family there in 1852. There he was one of the leading dentists for many years, dying Oct. 6, 1870. Following the removal of Dr. Ashley from Ypsilanti came Dr. Fred Powers, with whom I had my first experience in dental operations, and some of those fillings are doing me good service yet. After he had completed his work for me, he asked me to enter his office as a student, which offer I accepted and made arrangements to stay with him for four years. I, of course, knew nothing at that time of dental colleges, there being but three in existence, and these poorly equipped. After a couple of years, Dr. Carlton became tired of a small country town, and concluded to return to Lowell. I did not wish to go there with him; neither did I feel competent to go into practice, being very young. I was not as well prepared as I thought I ought to be, though probably I was as well qualified as most young practitioners of those days. I began to look around for a place in some office, where I could do plate-work, as I had a good deal of proficiency in that line. I happened into the office of Dr. Knowlton, of Detroit. He gave me a few days' work to help him out. He then advised me to go to Cincinnati and study in the Dental College there, kindly giving me a letter to his brother of the firm of Knowlton & Taft. They gave me employment for two years; I attending the college during the winters and graduating Feb. 22, 1860. I located soon after in Ypsialnti, where I have remained ever since. So far as I can learn, I was the first student to enter a dental college from Michigan, and the first graduate to locate in the state.

During the winter of 1856, Dr. A. F. Barr came to Ypsialnti. He had had a kind of checkered life, being of a roving disposition. He had worked in a great many offices, with men of a good deal of prominence, and was considered a very good plate-workman, and in those days that was the most of dentistry. He at first entered the office of Dr. Carlton and did plate-work, I getting much of my first insturction from him. In the following spring he opened an office of his own, continuing in practice until he died about eight years ago. A Dr. Baldwin was in company with Dr. Barr during 1859, which is all I know about his dental career. In the fall of 1857, Dr. W. R. Cutler, who had had a short pupilage in Rochester, N.Y., located here, and was in limited practice for about six months, when he went to Ionia, where he was more successful, but left dentistry some years ago, and is at the present time engaged in the drug trade. A Dr. Tucker came here in 1858 or 1859 and remained here five or six years; I know nothing further of him. A good sized cyclone struck this county in 1866, when two brothers by the name of Alderman located here. Where they came from I can't say; one of them had some knowledge of dentistry: the younger had none whatever. He was, however, supplied with forceps and materials for taking impressions, and with the aid of a good team, he commenced a systematic house to house canvass through the county. I think I can truly say that in the four or five years they were here, that one of them had solicited in two thirds of the houses of this and parts of Wayne and Monroe counties. Prices and trade offered in pay for their operations never stood in the way of a bargain. I have heard of many amusing episodes that they met with in their career. There is no doubt but they did an enormous amount of work, but they had nothing to show for it when they left town. In the spring of 1870, Dr. W. D. Tremper, a graduate of Ohio Dental College, Cincinnati, came to Ypsilanti, entering into partnership with J. A. Watling, which was continued till 1878, when he went to Portsmouth, Ohio, where he still has a large practice. He is one of those rare exceptions to be found in the profession, as he has become quite wealthy, and is at the head of a large shoe manufacturing company. The next one appearing on the scene was C.F.W. Baldwin, coming about the year 1872 from some of the Eastern States with a very short pupilage. He remained four or five years, then returned East. I don't know what has become of him. Dr. Justin E. Post, a graduate of the class of 1876, located here that year, afterwards moving to Muskegon; from there to Barnwell, South Carolina, where he is now engaged in practice. Following him came one A.B. Bell, who had had one term in the Pennsylvania College. He didn't succeed very well, and the less said of him the better. In 1878 or 1879, a man by the name of Kingsley came here, from some little town in Western New York. He was one of those smoothe oily individuals that worked the Church racket and always warranted his work for twenty years, and cut prices in two, making the point, that he just wanted a little business to keep him out of mischief, and did not care about profit. He found it desirable to go back East in a year, and died in Rochester, N.Y. Some time during the year 1879 Dr. M.F. Finley, a graduate of the class of '78 U. of M. located here and was in practice for a year or two, but yearning for a larger field, he removed to Washington where he has become one of the leading lights of the profession. In the spring of 1884, Dr. L.M. James, a graduate of the U. of M., formed a partnership with J.A. Watling, where he has continued in a successful proactice up to the present time. In 1885, John W. Van Fossen, also a graduate of the U. of M., located here, and is still in successful practice. In 1890, Dr. L.D. Camp, another graduate of the U. of M., formed a partnership with A.B. Bell, which continued only for a short time, when the doctor opened an office on his own account, continuing to thrive here now, as he has done in the past. In 1895, Dr. DeWitt Spalsbury, a graduate of the class of '89 of the U. of M., located here, and has evidently been successful in practice, as well as in a prospective matrimonial alliance. The last to come and the first to go away was Dr. Carrie M. Stewart, a graduate of the U. of M., class of '92, and D.D.Sc. Failing health compelled her to return to a warmer climate. She is at present at Forth Worth, Texas.

The article reprinted here appeared in “The Dental Journal” published by the Dental Society of the University of Michigan for March, 1900.

Dr. John Andress Watling was born in Ypsilanti on June 26, 1839 and died in Washington, D.C. in 1919. He was a grandson of John Watling who had settled in the area in 1831. He was a Professor of Clinical and Operative Dentistry at the University of Michigan and opened an office in 1860 in Ypsilanti.

Dr. Watling married Eunice Robinson Wright in 1864 and they moved into their new home at 121 North Huron Street at that time. Dr. Watling's office was directly next to their home at 119 N. Huron.

Mrs. Watling was very interested in community affairs. In 1868, she started the movement to found a public library in Ypsilanti and, in 1869, was one of the incorporators of the Ladies' Library Association and served as the first secretary. In 1878, she helped found the Ladies' Literary Club and on June 27, 1896, the first meeting of the local Daughters of the American Revolution was held in the Watling home.

A recent gift to the Museum is that of a very old dentist's drill— we believe it once belonged to Dr. Watling.