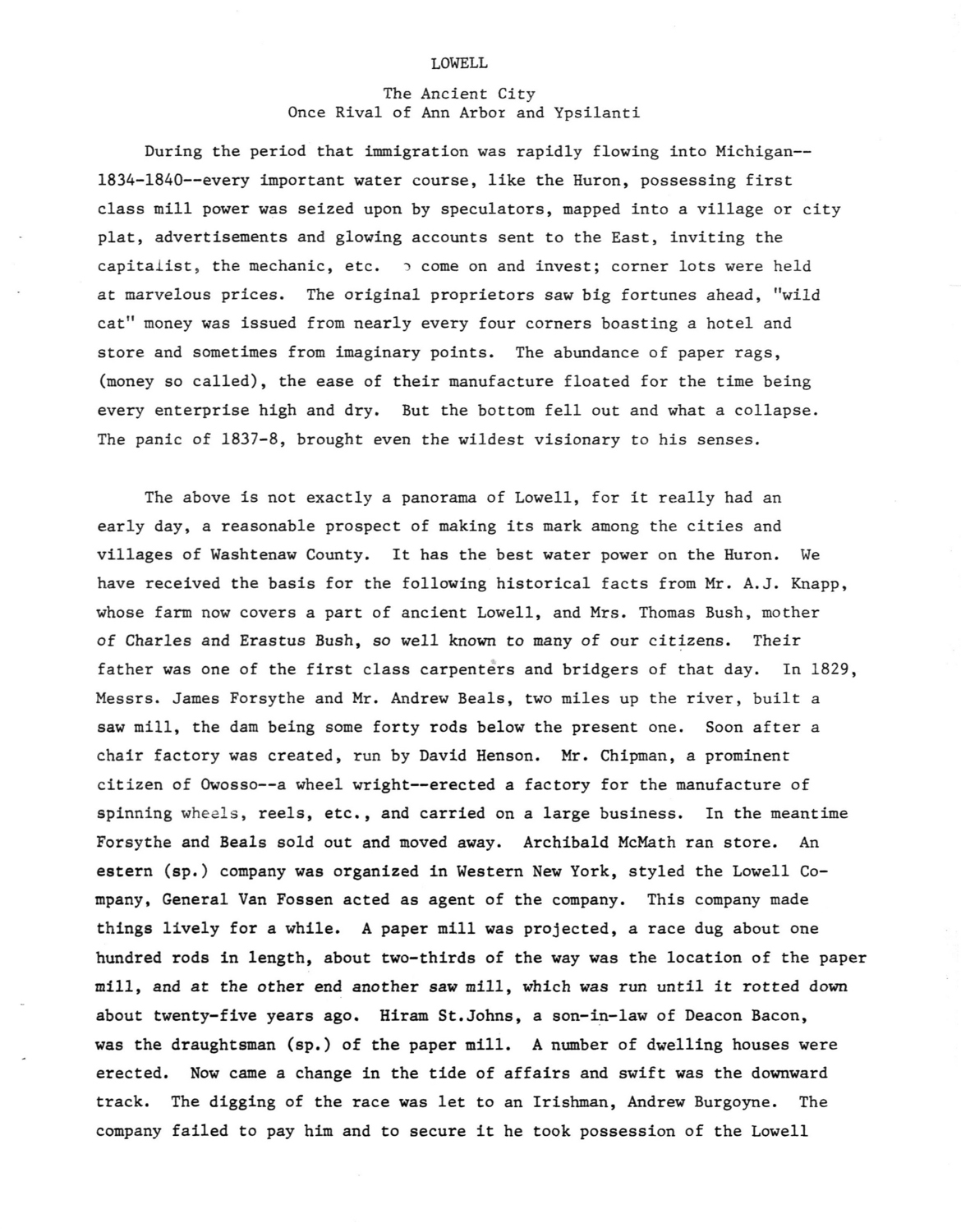 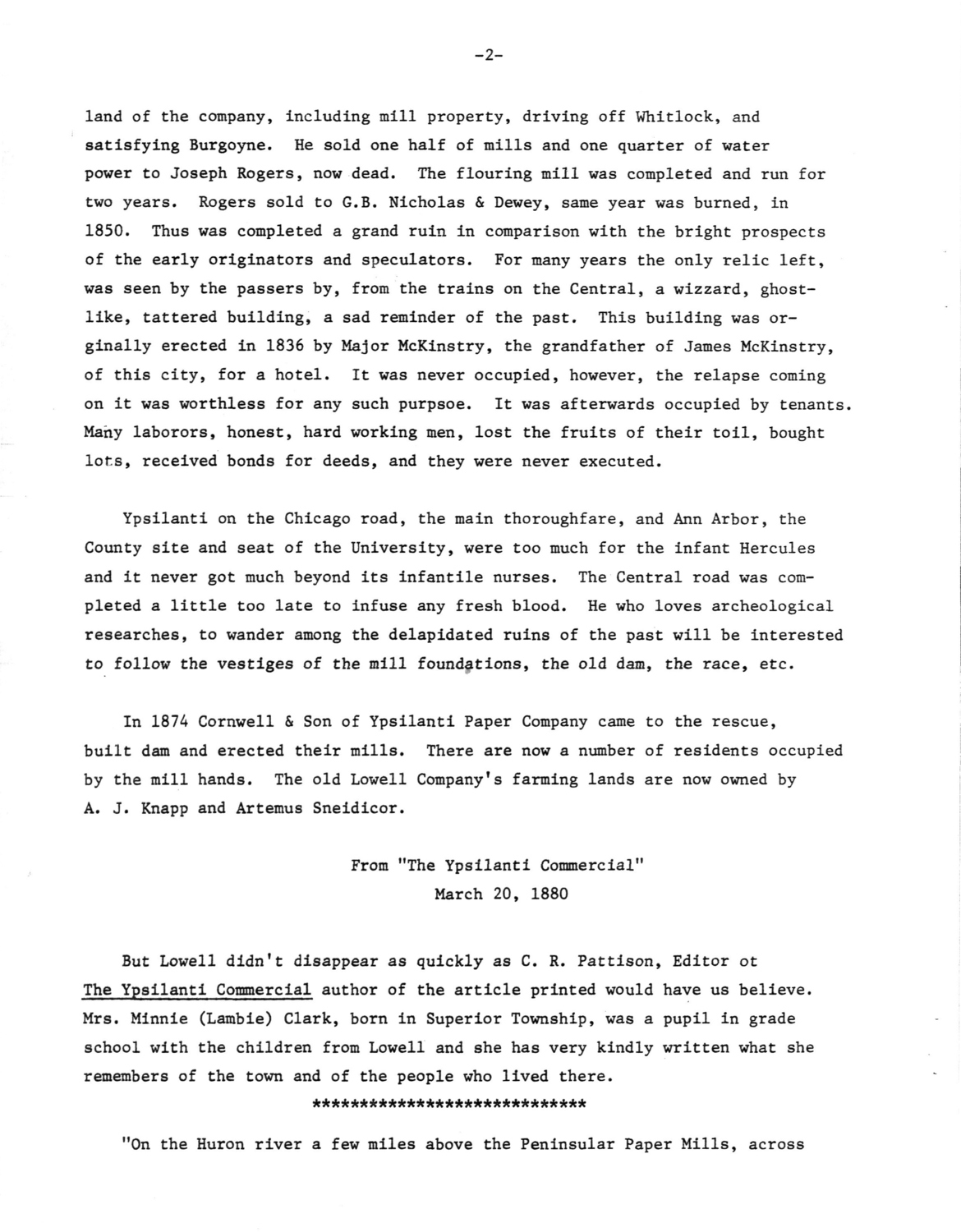 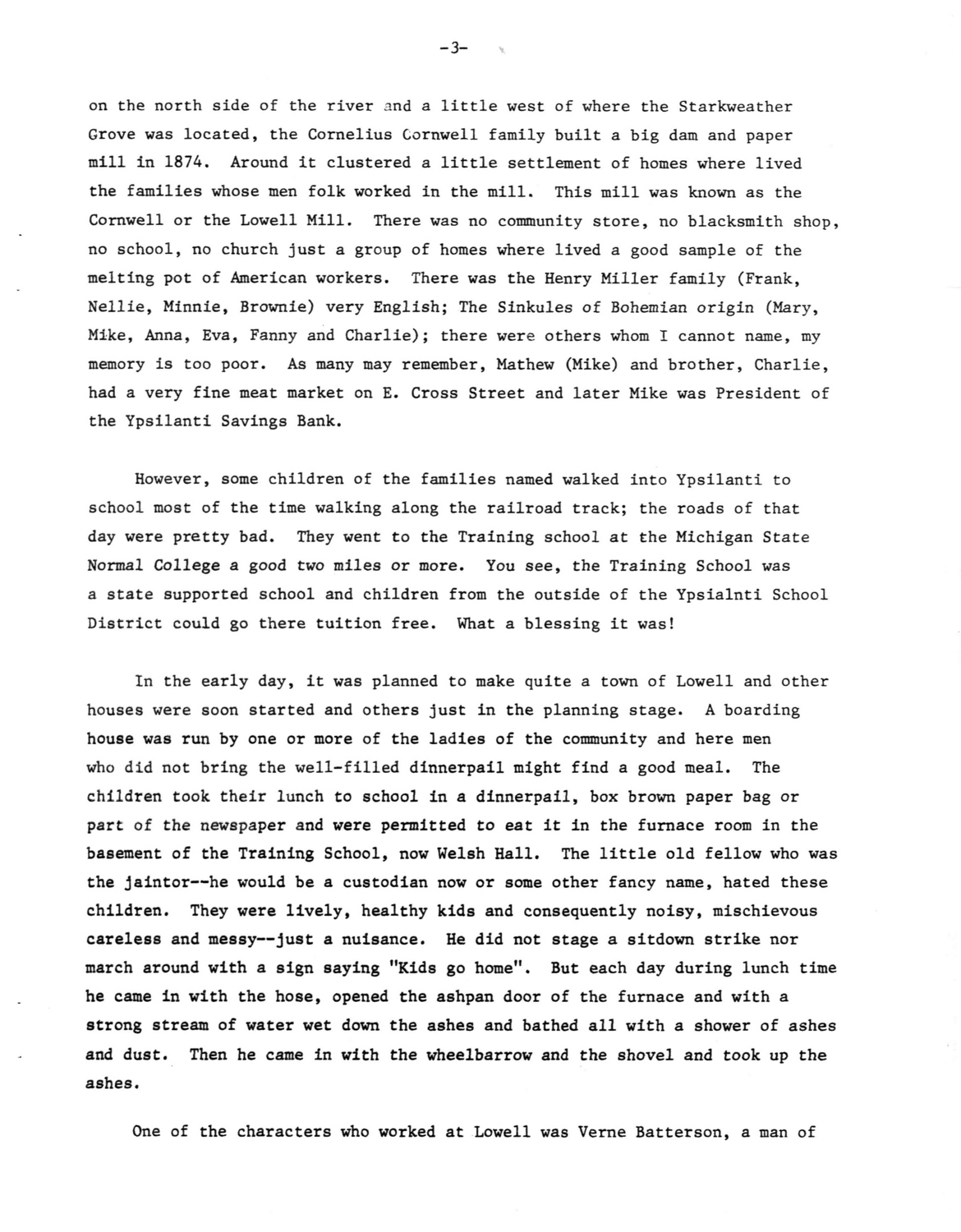 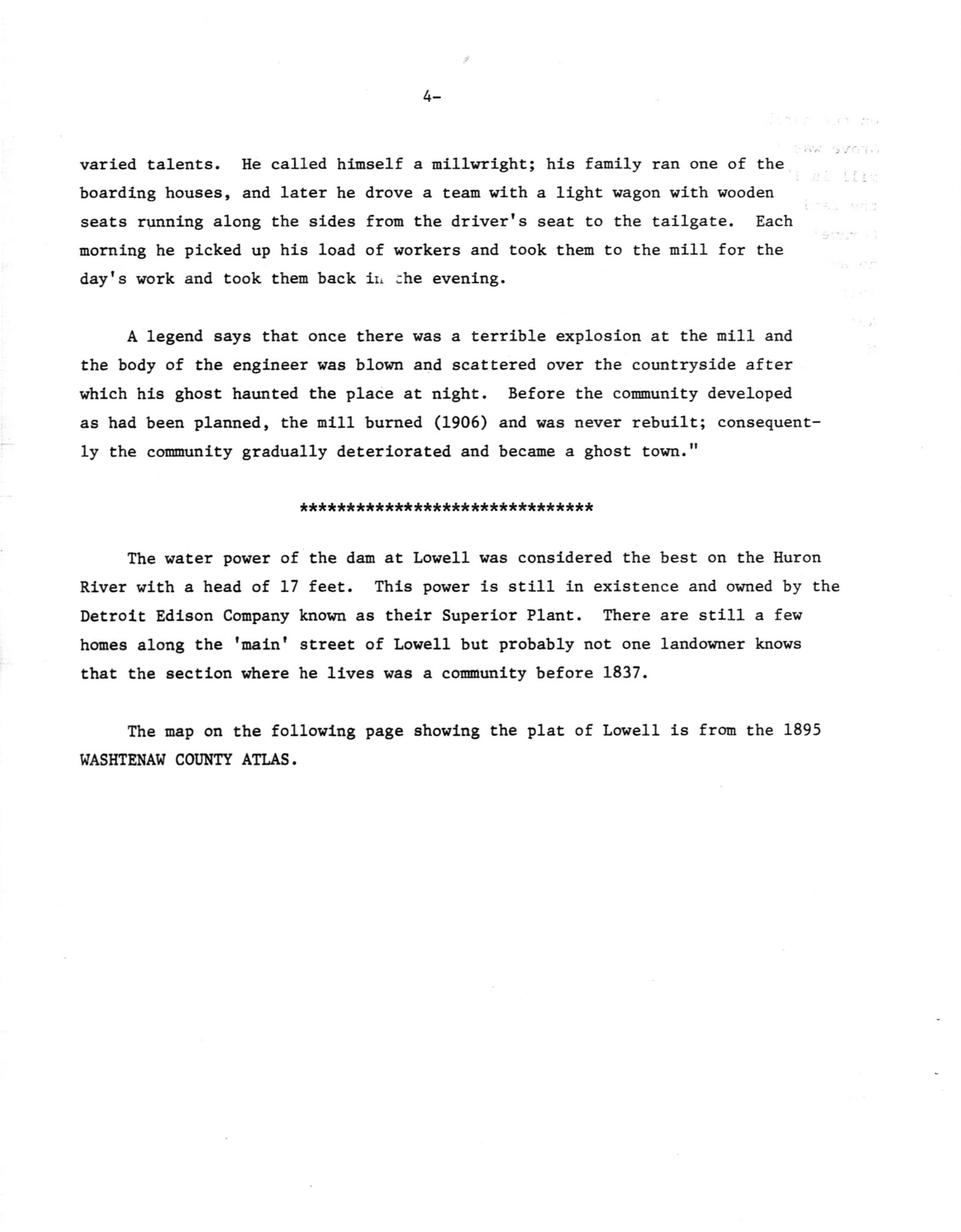 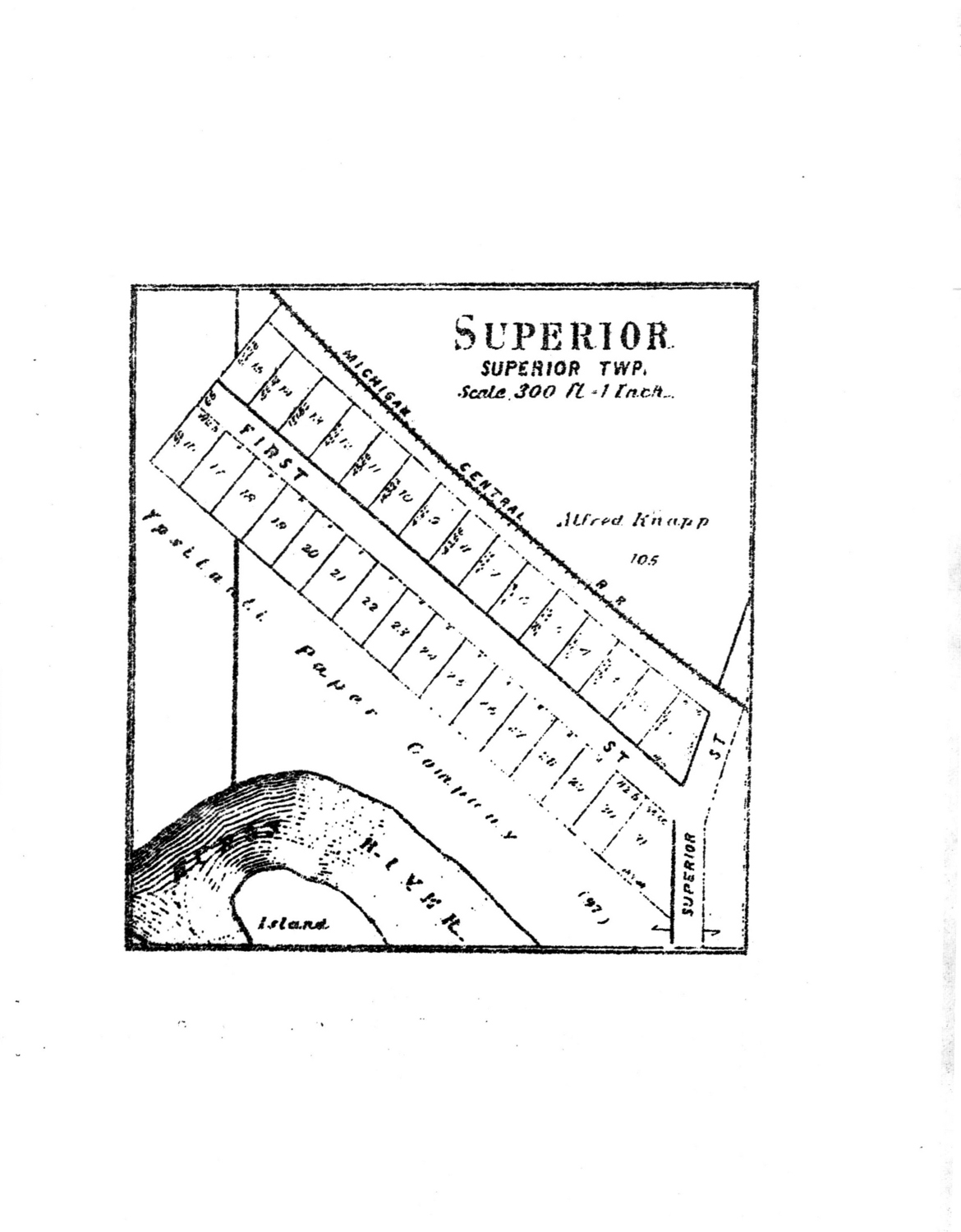 During the period that immigration was rapidly flowing into Michigan– 1834–1840–every important water course, like the Huron, possessing first class mill power was seized upon by speculators, mapped into a village or city plat, advertisements and glowing accounts sent to the East, inviting the capitalist, the mechanic, etc. o come on and invest; corner lots were held at marvelous prices. The original proprietors saw big fortunes ahead, “wild cat” money was issued from nearly every four corners boasting a hotel and store and sometimes from imaginary points. The abundance of paper rags, (money so called), the ease of their manufacture floated for the time being every enterprise high and dry. But the bottom fell out and what a collapse. The panic of 1837–8, brought even the wildest visionary to his senses.

The above is not exactly a panorama of Lowell, for it really had an early day, a reasonable prospect of making its mark among the cities and villages of Washtenaw County. It has the best water power on the Huron. We have received the basis for the following historical facts from Mr. A.J. Knapp, whose farm now covers a part of ancient Lowell, and Mrs. Thomas Bush, mother of Charles and Erastus Bush, so well known to many of our citizens. Their father was one of the first class carpenters and bridgers of that day. In 1829, Messrs. James Forsythe and Mr. Andrew Beals, two miles up the river, built a saw mill, the dam being some forty rods below the present one. Soon after a chair factory was created, run by David Henson. Mr. Chipman, a prominent citizen of Owosso–a wheel wright–erected a factory for the manufacture of spinning wheels, reels, etc., and carried on a large business. In the meantime Forsythe and Beals sold out and moved away. Archibald McMath ran store. An estern (sp.) company was organized in Western New York, styled the Lowell Company, General Van Fossen acted as agent of the company. This company made things lively for a while. A paper mill was projected, a race dug about one hundred rods in length, about two-thirds of the way was the location of the paper mill, and at the other end another saw mill, which was run until it rotted down about twenty-five years ago. Hiram St.Johns, a son-in-law of Deacon Bacon, was the draughtsman (sp.) of the paper mill. A number of dwelling houses were erected. Now came a change in the tide of affairs and swift was the downward track. The digging of the race was let to an Irishman, Andrew Burgoyne. The company failed to pay him and to secure it he took possession of the Lowell land of the company, including mill property, driving off Whitlock, and satisfying Burgoyne. He sold one half of mills and one quarter of water power to Joseph Rogers, now dead. The flouring mill was completed and run for two years. Rogers sold to G.B. Nicholas & Dewey, same year was burned, in 1850. Thus was completed a grand ruin in comparison with the bright prospects of the early originators and speculators. For many years the only relic left, was seen by the passers by, from the trains on the Central, a wizzard, ghostlike, tattered building, a sad reminder of the past. This building was orginally erected in 1836 by Major McKinstry, the grandfather of James McKinstry, of this city, for a hotel. It was never occupied, however, the relapse coming on it was worthless for any such purpsoe. It was afterwards occupied by tenants. Many laborors, honest, hard working men, lost the fruits of their toil, bought lots, received bonds for deeds, and they were never executed.

Ypsilanti on the Chicago road, the main thoroughfare, and Ann Arbor, the County site and seat of the University, were too much for the infant Hercules and it never got much beyond its infantile nurses. The Central road was completed a little too late to infuse any fresh blood. He who loves archeological researches, to wander among the delapidated ruins of the past will be interested to follow the vestiges of the mill foundations, the old dam, the race, etc.

In 1874 Cornwell & Son of Ypsilanti Paper Company came to the rescue, built dam and erected their mills. There are now a number of residents occupied by the mill hands. The old Lowell Company's farming lands are now owned by A. J. Knapp and Artemus Sneidicor.

But Lowell didn't disappear as quickly as C. R. Pattison, Editor ot The Ypsilanti Commercial author of the article printed would have us believe. Mrs. Minnie (Lambie) Clark, born in Superior Township, was a pupil in grade school with the children from Lowell and she has very kindly written what she remembers of the town and of the people who lived there.

“On the Huron river a few miles above the Peninsular Paper Mills, across on the north side of the river and a little west of where the Starkweather Grove was located, the Cornelius Cornwell family built a big dam and paper mill in 1874. Around it clustered a little settlement of homes where lived the families whose men folk worked in the mill. This mill was known as the Cornwell or the Lowell Mill. There was no community store, no blacksmith shop, no school, no church just a group of homes where lived a good sample of the melting pot of American workers. There was the Henry Miller family (Frank, Nellie, Minnie, Brownie) very English; The Sinkules of Bohemian origin (Mary, Mike, Anna, Eva, Fanny and Charlie); there were others whom I cannot name, my memory is too poor. As many may remember, Mathew (Mike) and brother, Charlie, had a very fine meat market on E. Cross Street and later Mike was President of the Ypsilanti Savings Bank.

However, some children of the families named walked into Ypsilanti to school most of the time walking along the railroad track; the roads of that day were pretty bad. They went to the Training school at the Michigan State Normal College a good two miles or more. You see, the Training School was a state supported school and children from the outside of the Ypsialnti School District could go there tuition free. What a blessing it was!

In the early day, it was planned to make quite a town of Lowell and other houses were soon started and others just in the planning stage. A boarding house was run by one or more of the ladies of the community and here men who did not bring the well-filled dinnerpail might find a good meal. The children took their lunch to school in a dinnerpail, box brown paper bag or part of the newspaper and were permitted to eat it in the furnace room in the basement of the Training School, now Welsh Hall. The little old fellow who was the jaintor–he would be a custodian now or some other fancy name, hated these children. They were lively, healthy kids and consequently noisy, mischievous careless and messy–just a nuisance. He did not stage a sitdown strike nor march around with a sign saying “Kids go home”. But each day during lunch time he came in with the hose, opened the ashpan door of the furnace and with a strong stream of water wet down the ashes and bathed all with a shower of ashes and dust. Then he came in with the wheelbarrow and the shovel and took up the ashes.

One of the characters who worked at Lowell was Verne Batterson, a man of varied talents. He called himself a millwright; his family ran one of the boarding houses, and later he drove a team with a light wagon with wooden seats running along the sides from the driver's seat to the tailgate. Each morning he picked up his load of workers and took them to the mill for the day's work and took them back in the evening.

A legend says that once there was a terrible explosion at the mill and the body of the engineer was blown and scattered over the countryside after which his ghost haunted the place at night. Before the community developed as had been planned, the mill burned (1906) and was never rebuilt; consequently the community gradually deteriorated and became a ghost town.”

The water power of the dam at Lowell was considered the best on the Huron River with a head of 17 feet. This power is still in existence and owned by the Detroit Edison Company known as their Superior Plant. There are still a few homes along the ‘main' street of Lowell but probably not one landowner knows that the section where he lives was a community before 1837.

The map on the following page showing the plat of Lowell is from the 1895 WASHTENAW COUNTY ATLAS.