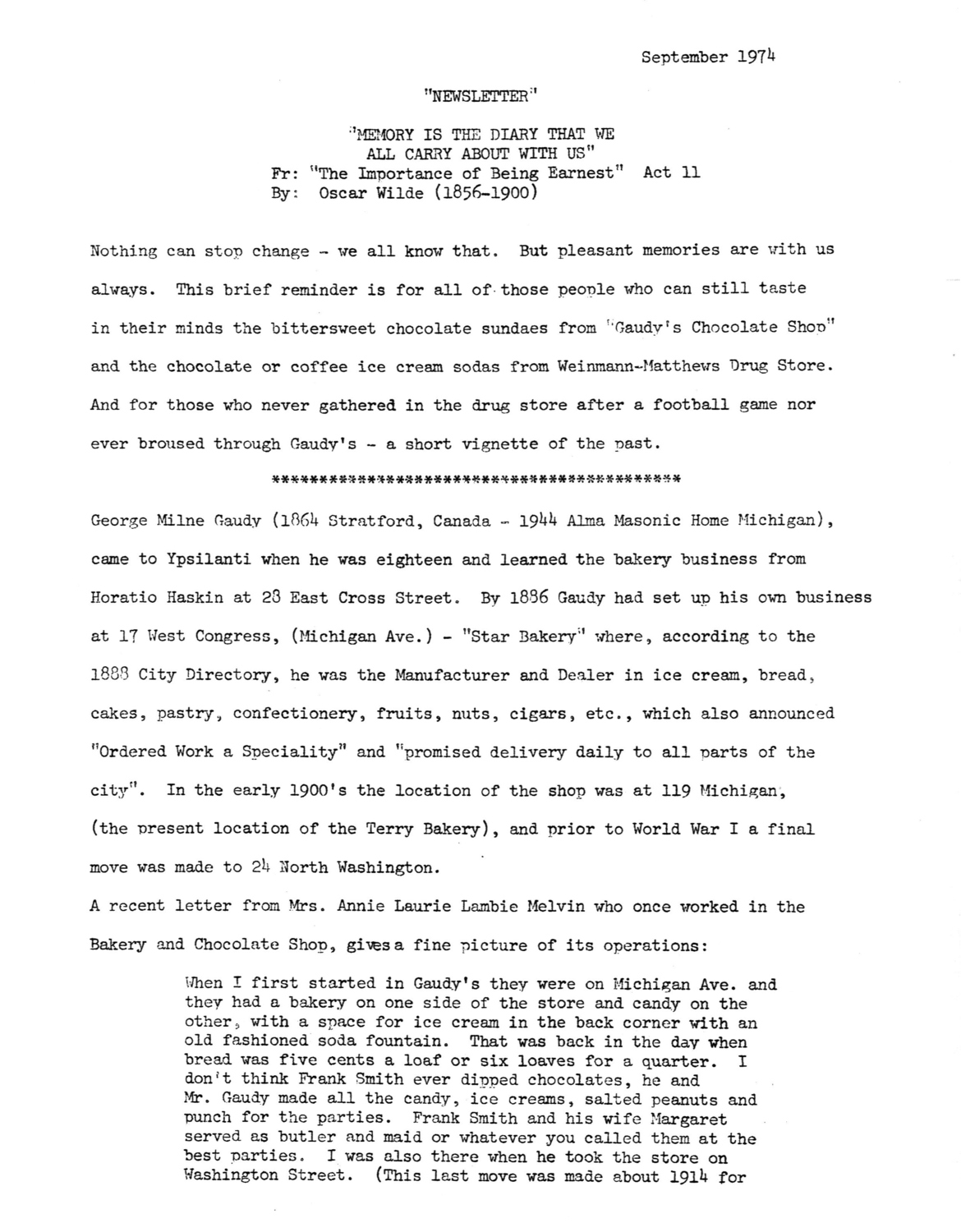 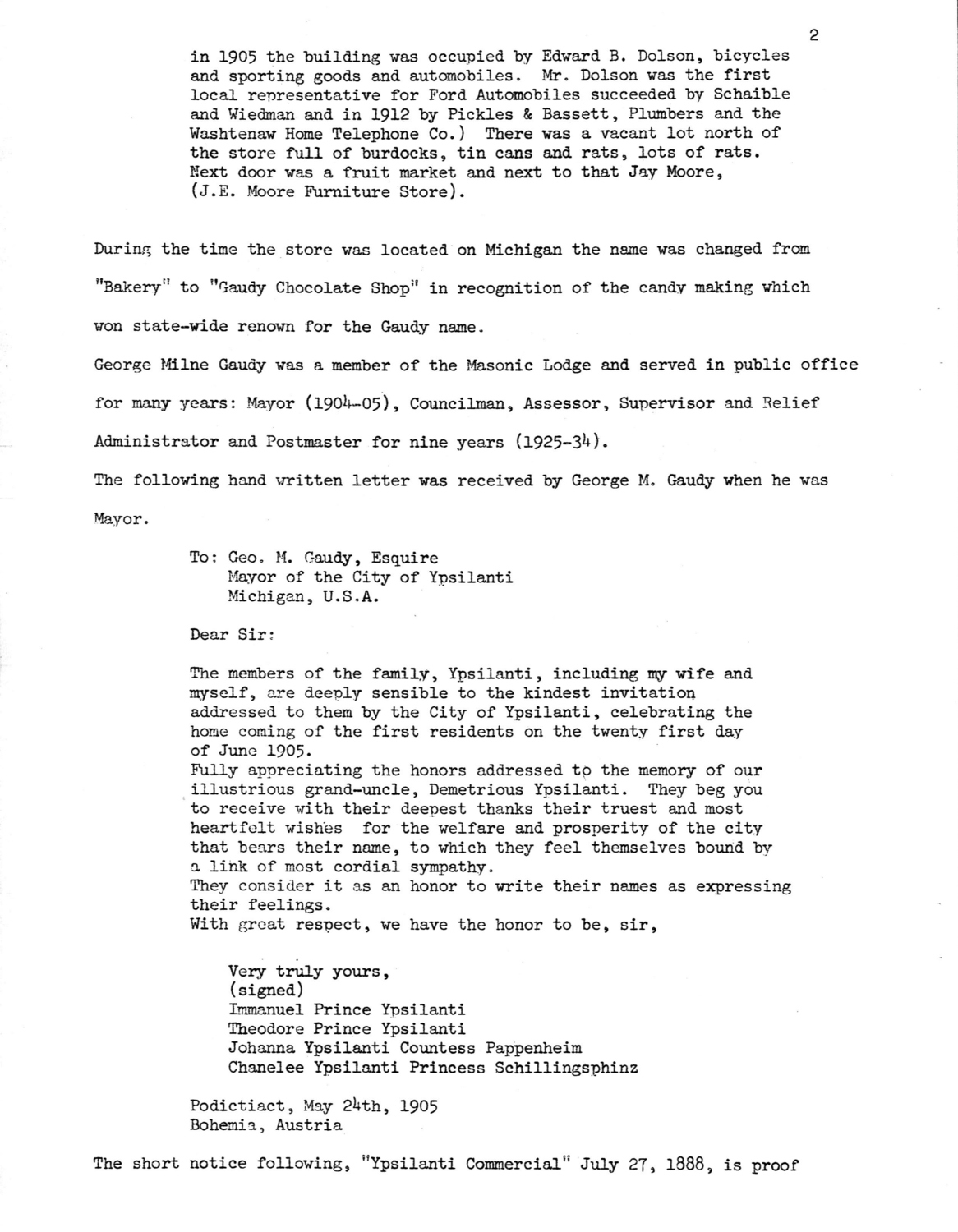 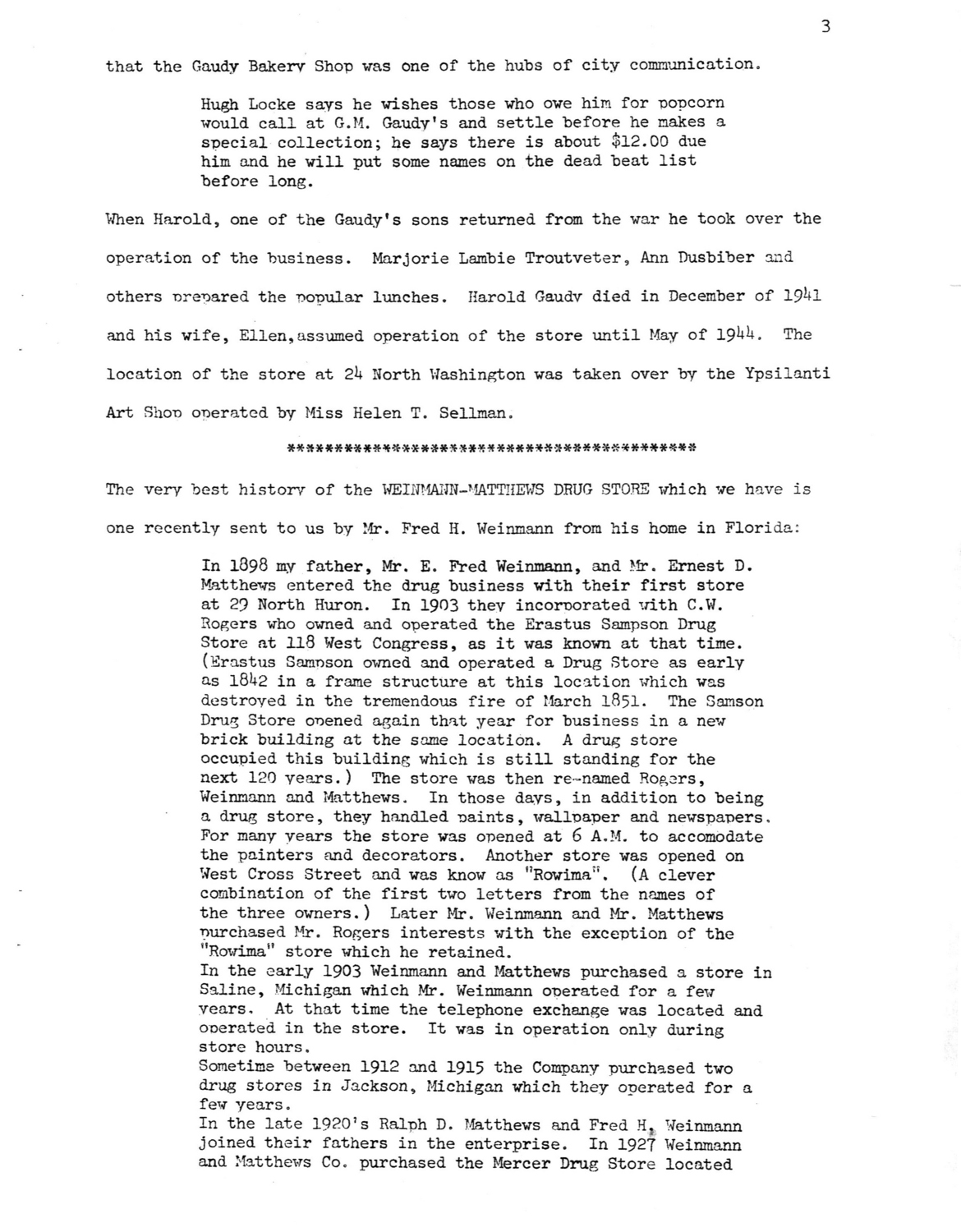 Nothing can stop change-we all know that. But pleasant memories are with us always. This brief reminder is for all of those people who can still taste in their minds the bittersweet chocolate sundaes from “Gaudy's Chocolate Shop” and the chocolate or coffee ice cream sodas from Weinmann-Matthews Drug Store. And for those who never gathered in the drug store after a football game nor ever broused through Gaudy's-a short vignette of the past.

George Milne Gaudy (1864 Stratford, Canada-1944 Alma Masonic Home Michigan), came to Ypsilanti when he was eighteen and learned the bakery business from Horatio Haskin at 23 East Cross Street. By 1886 Gaudy had set up his own business at 17 West Congress, (Michigan Ave.)-“Star Bakery” where, according to the 1888 City Directory, he was the Manufacturer and Dealer in ice cream, bread, cakes, pastry, confectionery, fruits, nuts, cigars, etc., which also announced “Ordered Work a Speciality” and “promised delivery daily to all parts of the city”. In the early 1900's the location of the shop was at 119 Michigan, (the present location of the Terry Bakery), and prior to World War I a final move was made to 24 North Washington.

A recent letter from Mrs. Annie Laurie Lambie Melvin who once worked in the Bakery and Chocolate Shop, gives a fine picture of its operations:

When I first started in Gaudy's they were on Michigan Ave. and they had a bakery on one side of the store and candy on the other, with a space for ice cream in the back corner with an old fashioned soda fountain. That was back in the day when bread was five cents a loaf or six loaves for a quarter. I don't think Frank Smith ever dipped chocolates, he and Mr. Gaudy made all the candy, ice creams, salted peanuts and punch for the parties. Frank Smith and his wife Margaret served as butler and maid or whatever you called them at the best parties. I was also there when he took the store on Washington Street. (This last move was made about 1914 for in 1905 the building was occupied by Edward B. Dolson, bicycles and sporting goods and automobiles. Mr. Dolson was the first local representative for Ford Automobiles succeeded by Schaible and Wiedman and in 1912 by Pickles & Bassett, Plumbers and the Washtenaw Home Telephone Co.) There was a vacant lot north of the store full of burdocks, tin cans and rats, lots of rats. Next door was a fruit market and next to that Jay Moore, (J.E. Moore Furniture Store).

During the time the store was located on Michigan the name was changed from “Bakery” to “Gaudy Chocolate Shop” in recognition of the candy making which won state-wide renown for the Gaudy name.

George Milne Gaudy was a member of the Masonic Lodge and served in public office for many years: Mayor (1904–05), Councilman, Assessor, Supervisor and Relief Administrator and Postmaster for nine years (1925–34).

The following hand written letter was received by George M. Gaudy when he was Mayor.

To: Geo. M. Gaudy, Esquire Mayor of the City of Ypsilanti Michigan, U.S.A.

The members of the family, Ypsilanti, including my wife and myself, are deeply sensible to the kindest invitation addressed to them by the City of Ypsilanti, celebrating the home coming of the first residents on the twenty first day of June 1905.

Fully appreciating the honors addressed to the memory of our illustrious grand-uncle, Demetrious Ypsilanti. They beg you to receive with their deepest thanks their truest and most heartfelt wishes for the welfare and prosperity of the city that bears their name, to which they feel themselves bound by a link of most cordial sympathy.

They consider it as an honor to write their names as expressing their feelings.

With great respect, we have the honor to be, sir,

The short notice following, “Ypsilanti Commercial” July 27, 1888, is proof that the Gaudy Bakery Shop was one of the hubs of city communication.

Hugh Locke says he wishes those who owe him for popcorn would call at G.M. Gaudy's and settle before he makes a special collection; he says there is about $12.00 due him and he will put some names on the dead beat list before long.

When Harold, one of the Gaudy's sons returned from the war he took over the operation of the business. Marjorie Lambie Troutveter, Ann Dusbiber and others prepared the popular lunches. Harold Gaudy died in December of 1941 and his wife, Ellen, assumed operation of the store until May of 1944. The location of the store at 24 North Washington was taken over by the Ypsilanti Art Shop operated by Miss Helen T. Sellman.

View an image of Gaudy's Chocolate Shop in our Gleanings image gallery.