Who Was Elijah McCoy? 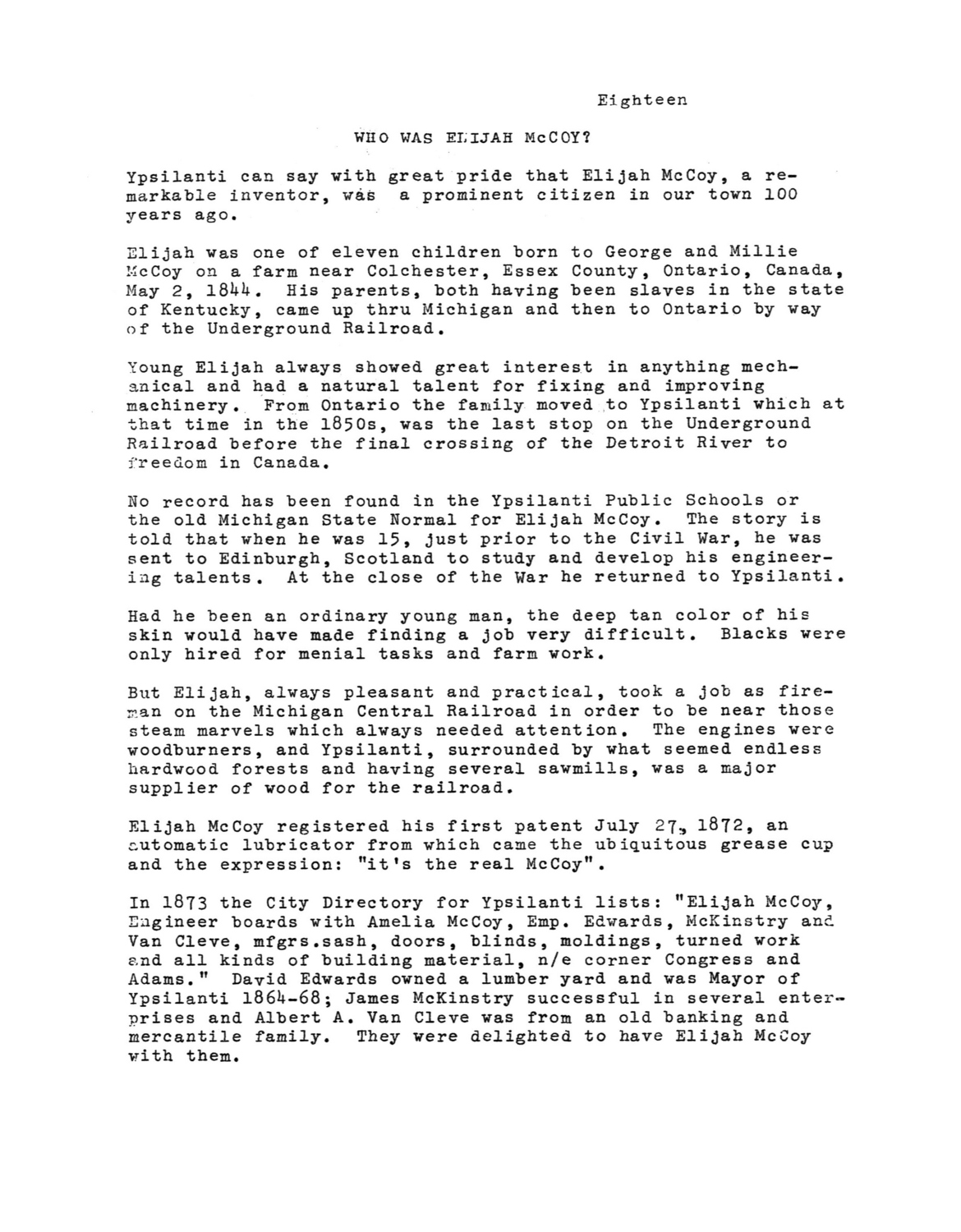 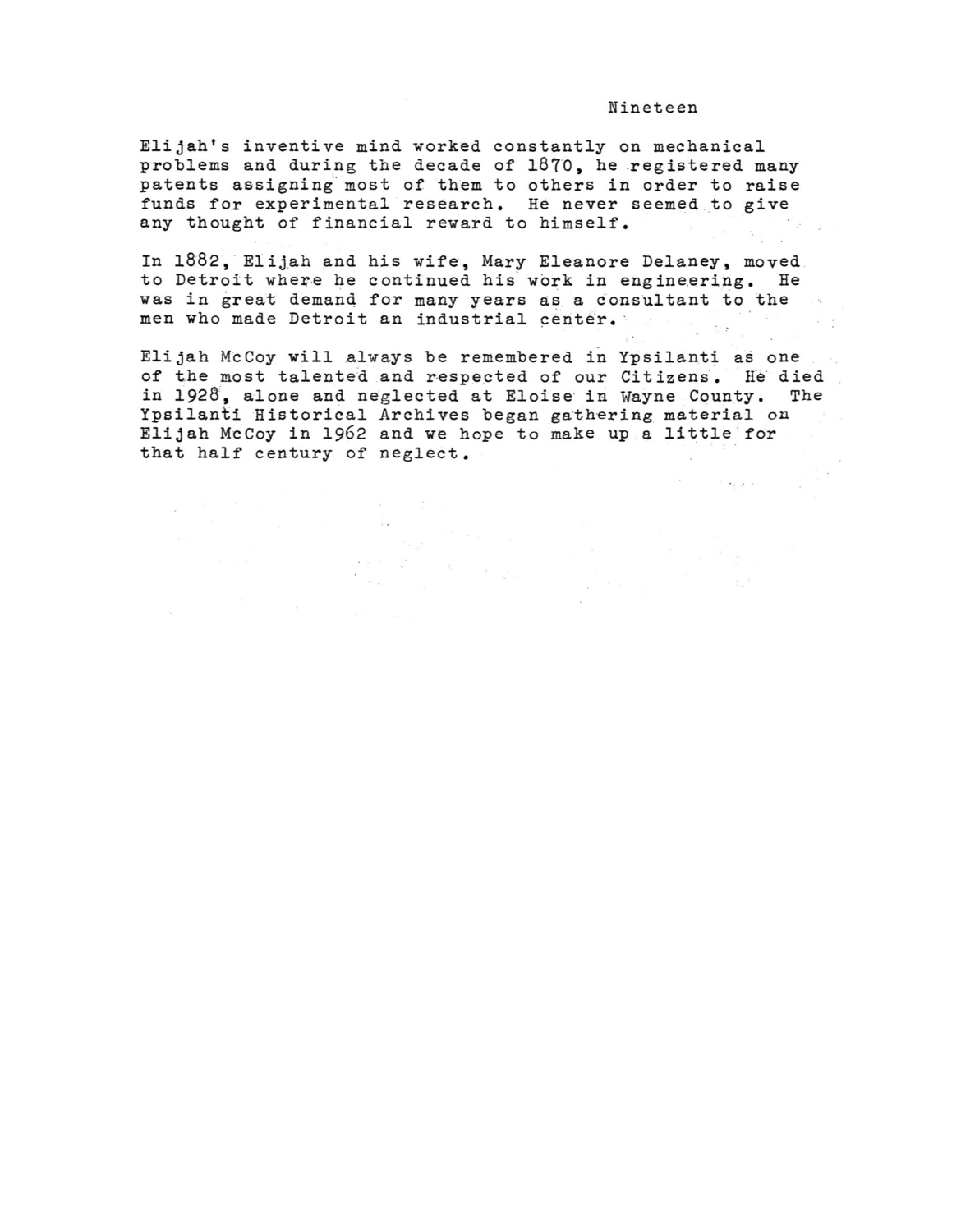 Ypsilanti can say with great pride that Elijah McCoy, a re-markable inventor, was a prominent citizen in our town 100 years ago.

Elijah was one of eleven children born to George and Millie McCoy on a farm near Colchester, Essex County, Ontario, Canada, May 2, 1844. His parents, both having been slaves in the state of Kentucky, came up thru Michigan and then to Ontario by way of the Underground Railroad.

Young Elijah always showed great interest in anything mech-anical and had a natural talent for fixing and improving machinery. From Ontario the family moved to Ypsilanti which at that time in the 1850s, was the last stop on the Underground Railroad before the final crossing of the Detroit River to freedom in Canada.

No record has been found in the Ypsilanti Public Schools or the old Michigan State Normal for Elijah McCoy. The story is told that when he was 15, just prior to the Civil War, he was sent to Edinburgh, Scotland to study and develop his engineering talents. At the close of the War he returned to Ypsilanti.

Had he been an ordinary young man, the deep tan color of his skin would have made finding a job very difficult. Blacks were only hired for menial tasks and farm work.

But Elijah, always pleasant and practical, took a job as fire-man on the Michigan Central Railroad in order to be near those steam marvels which always needed attention. The engines were woodburners, and Ypsilanti, surrounded by what seemed endless hardwood forests and having several sawmills, was a major supplier of wood for the railroad.

Elijah McCoy registered his first patent July 27, 1872, an automatic lubricator from which came the ubiquitous grease cup and the expression: “it's the real McCoy”.

In 1873 the City Directory for Ypsilanti lists: “Elijah McCoy, Engineer boards with Amelia McCoy, Emp. Edwards, McKinstry and Van Cleve, mfgrs. sash, doors, blinds, moldings, turned work and all kinds of building material, n/e corner Congress and Adams.” David Edwards owned a lumber yard and was Mayor of Ypsilanti 1864–68; James McKinstry successful in several enter-prises and Albert A. Van Cleve was from an old banking and mercantile family. They were delighted to have Elijah McCoy with them.

Elijah's inventive mind worked constantly on mechanical problems and during the decade of 1870, he registered many patents assigning most of them to others in order to raise funds for experimental research. He never seemed to give any thought of financial reward to himself.

In 1882, Elijah and his wife, Mary Eleanore Delaney, moved to Detroit where he continued his work in engineering. He was in great demand for many years as a consultant to the men who made Detroit an industrial center.

Elijah McCoy will always be remembered in Ypsilanti as one of the most talented and respected of our Citizens. He died in 1928, alone and neglected at Eloise in Wayne County. The Ypsilanti Historical Archives began gathering material on Elijah McCoy in 1962 and we hope to make up a little for that half century of neglect.

View an image of Elijah McCoy in our Gleanings image gallery.