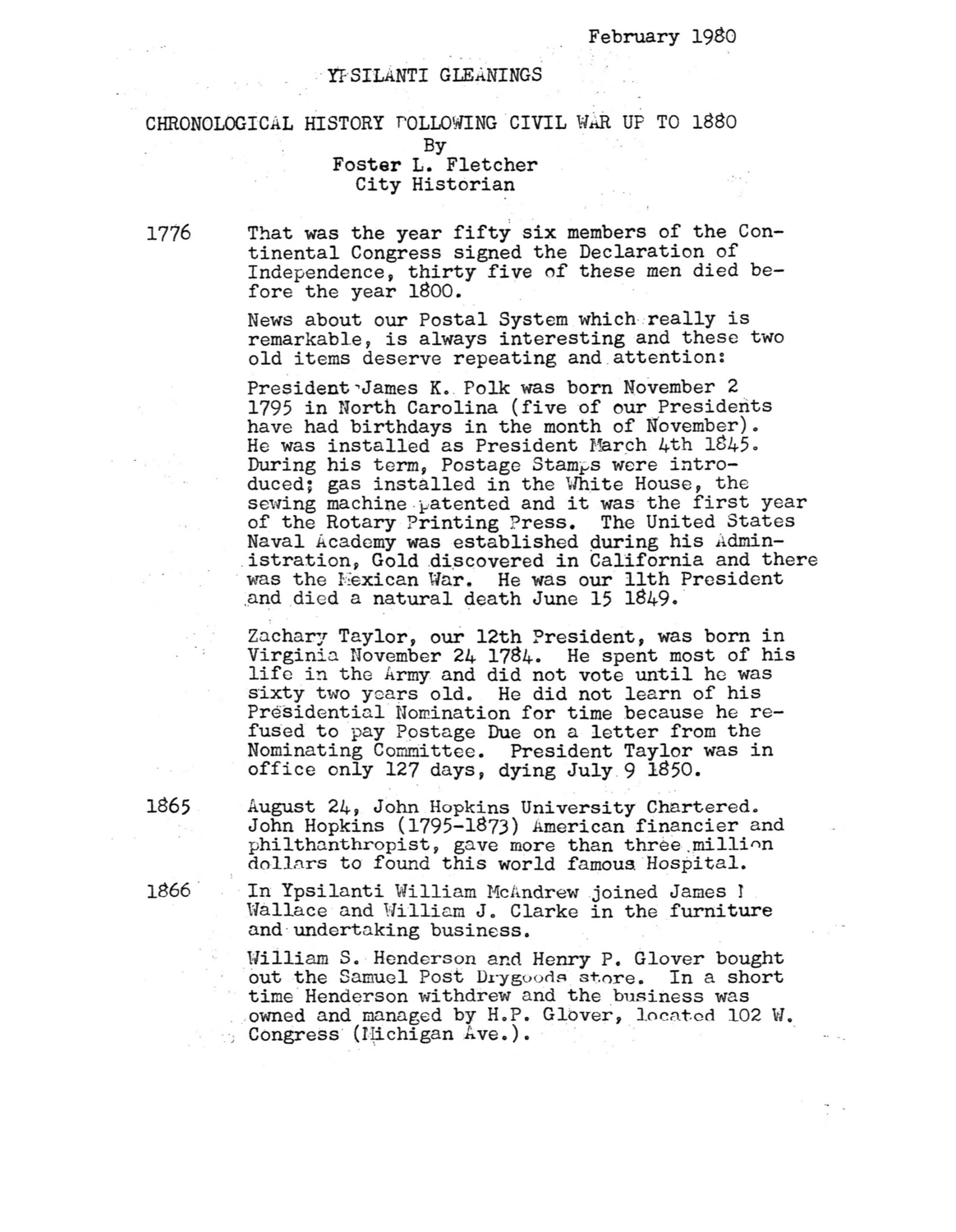 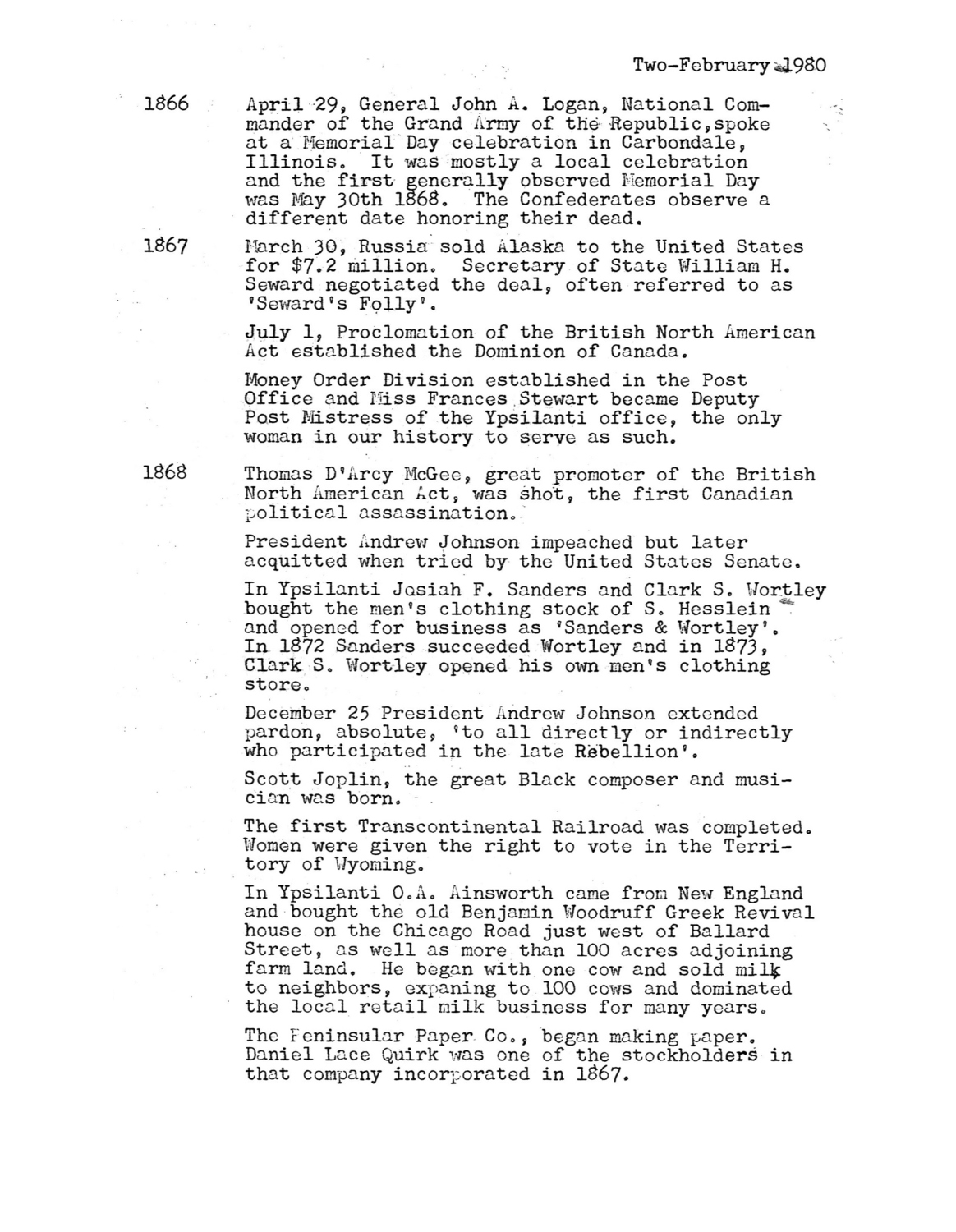 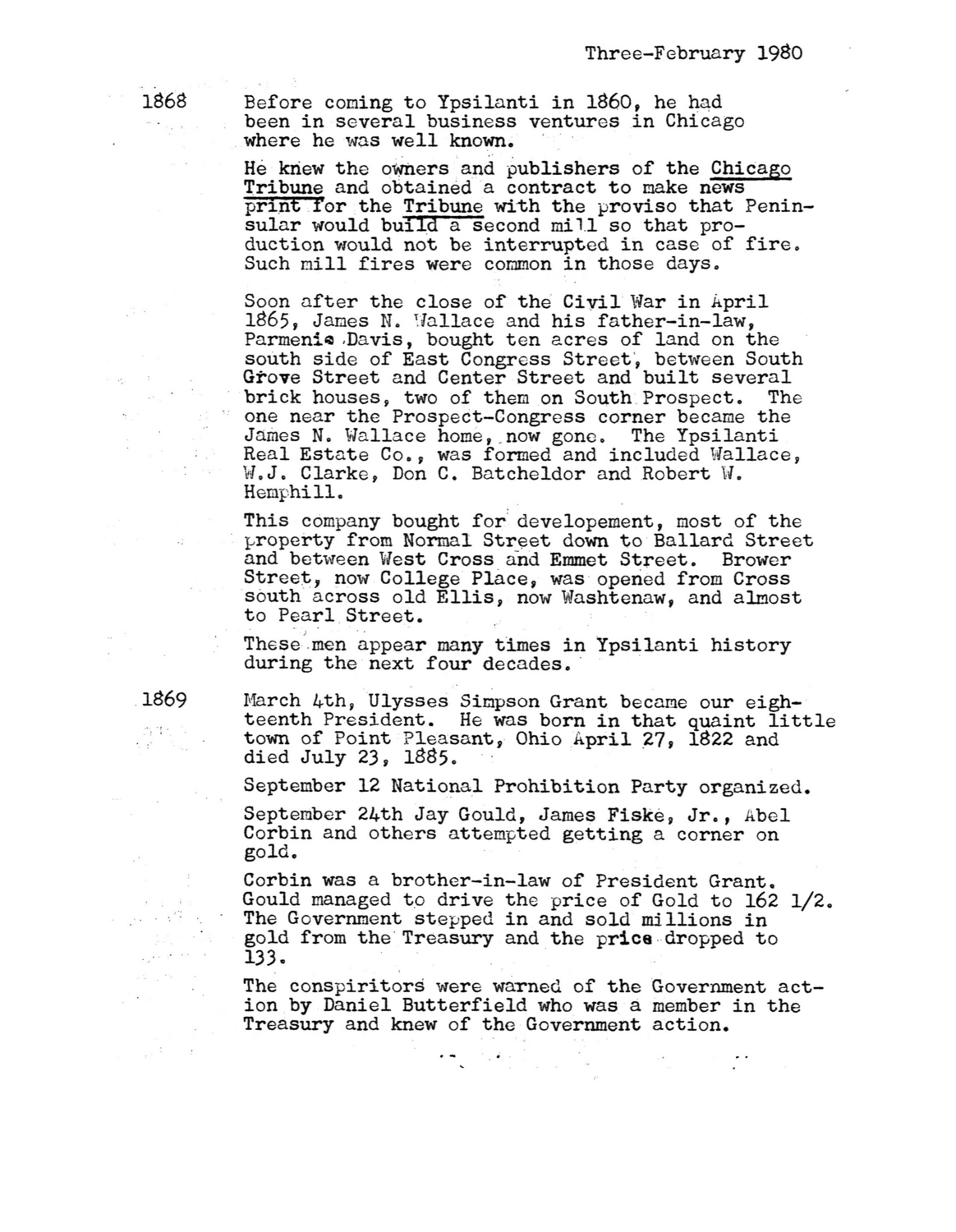 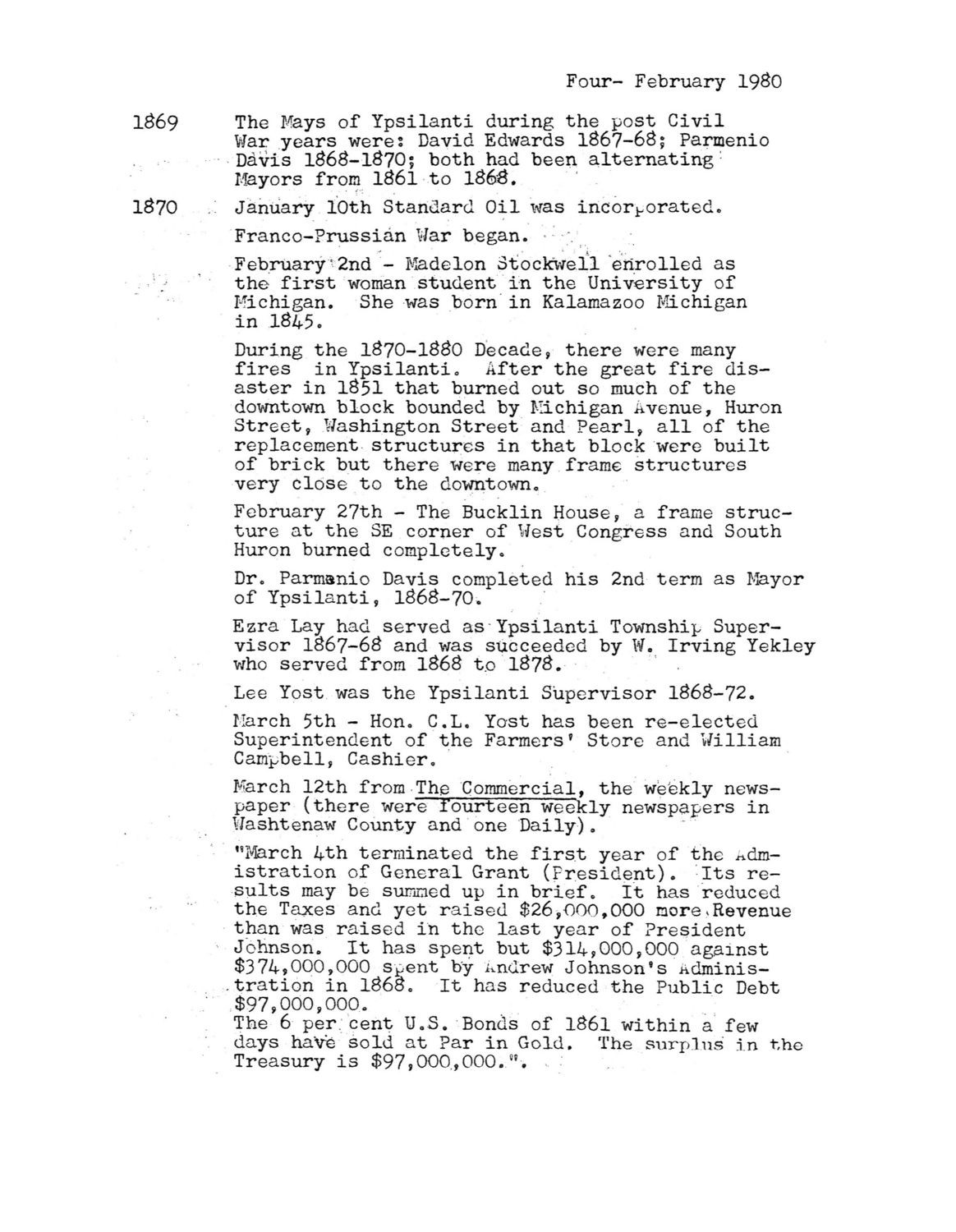 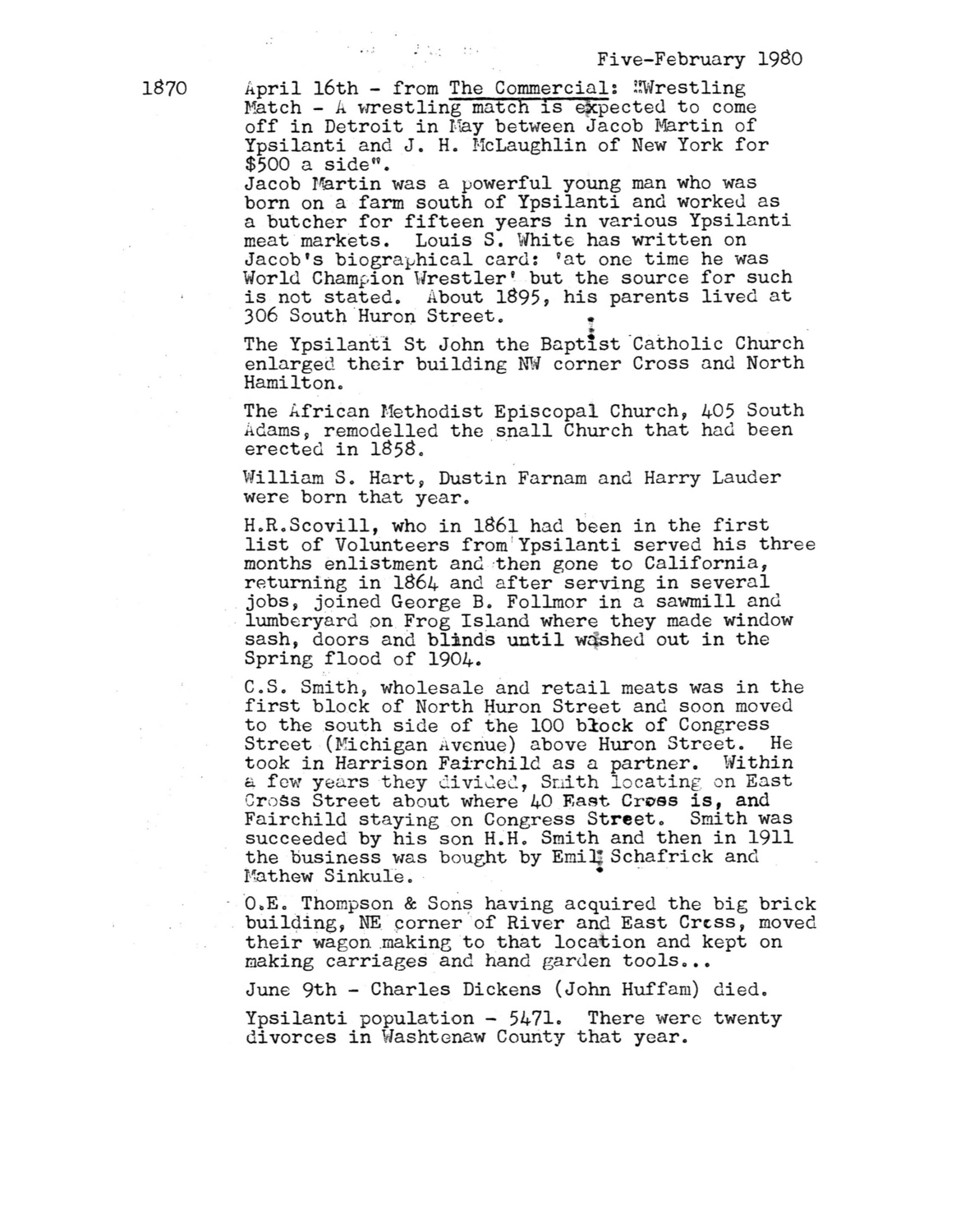 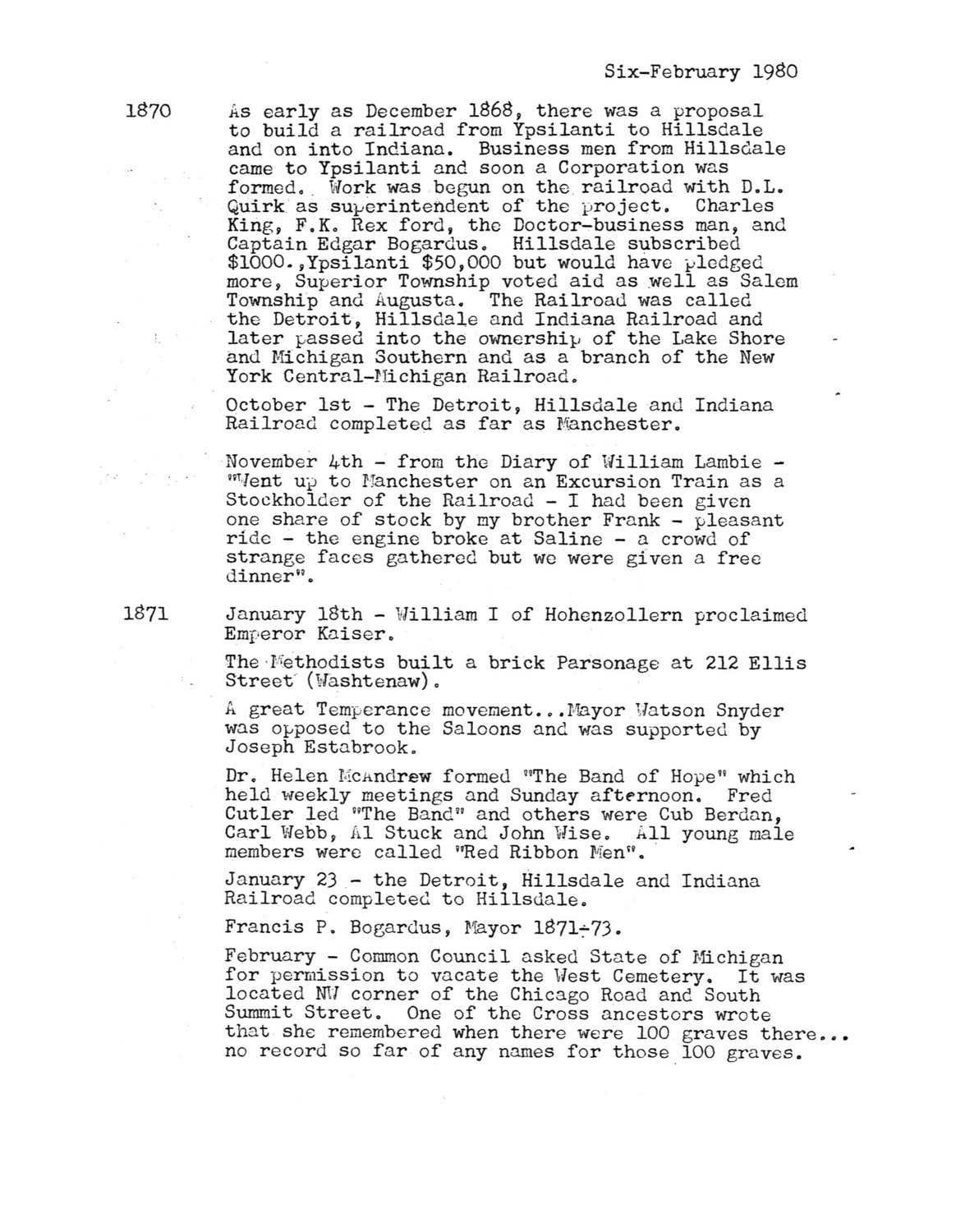 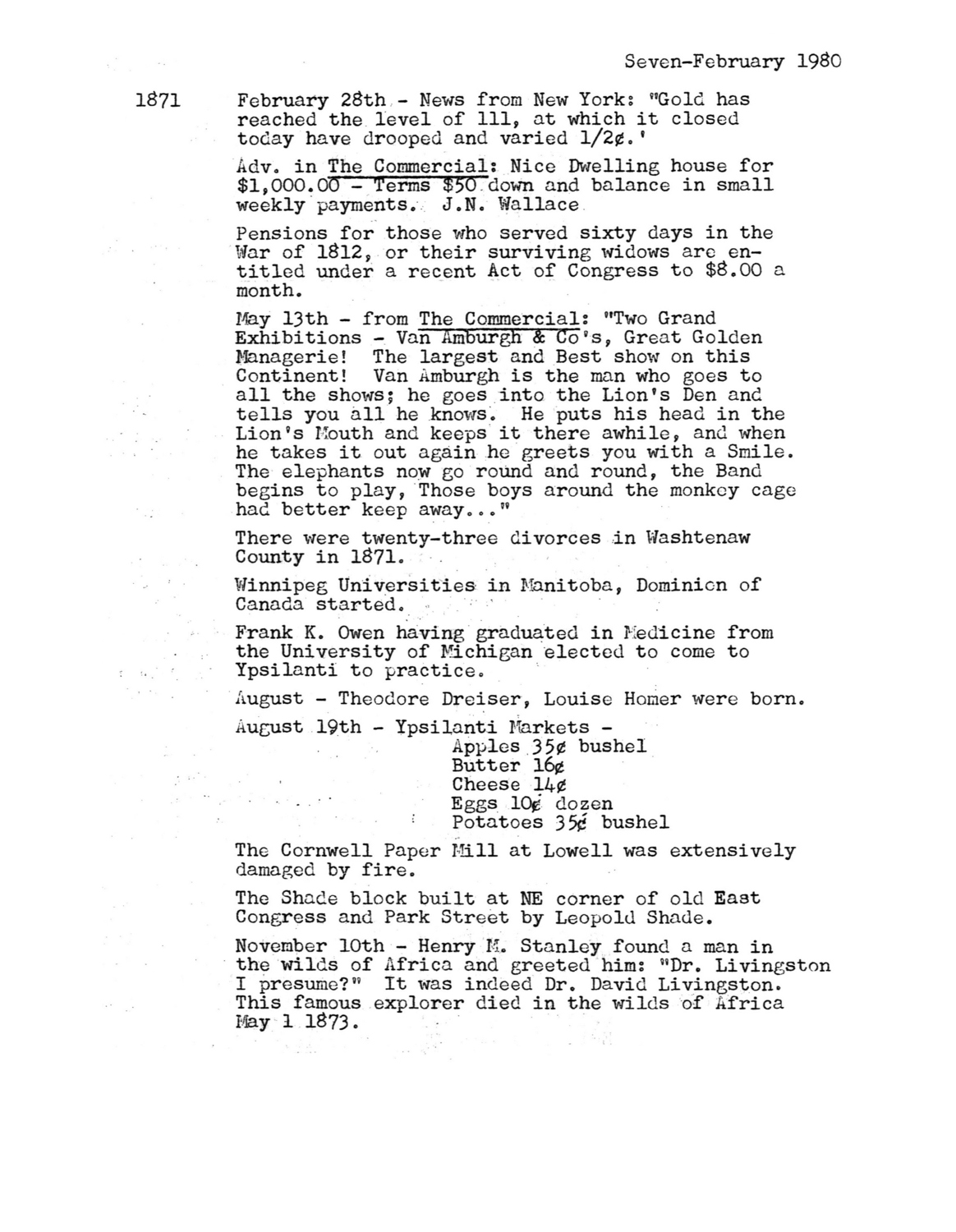 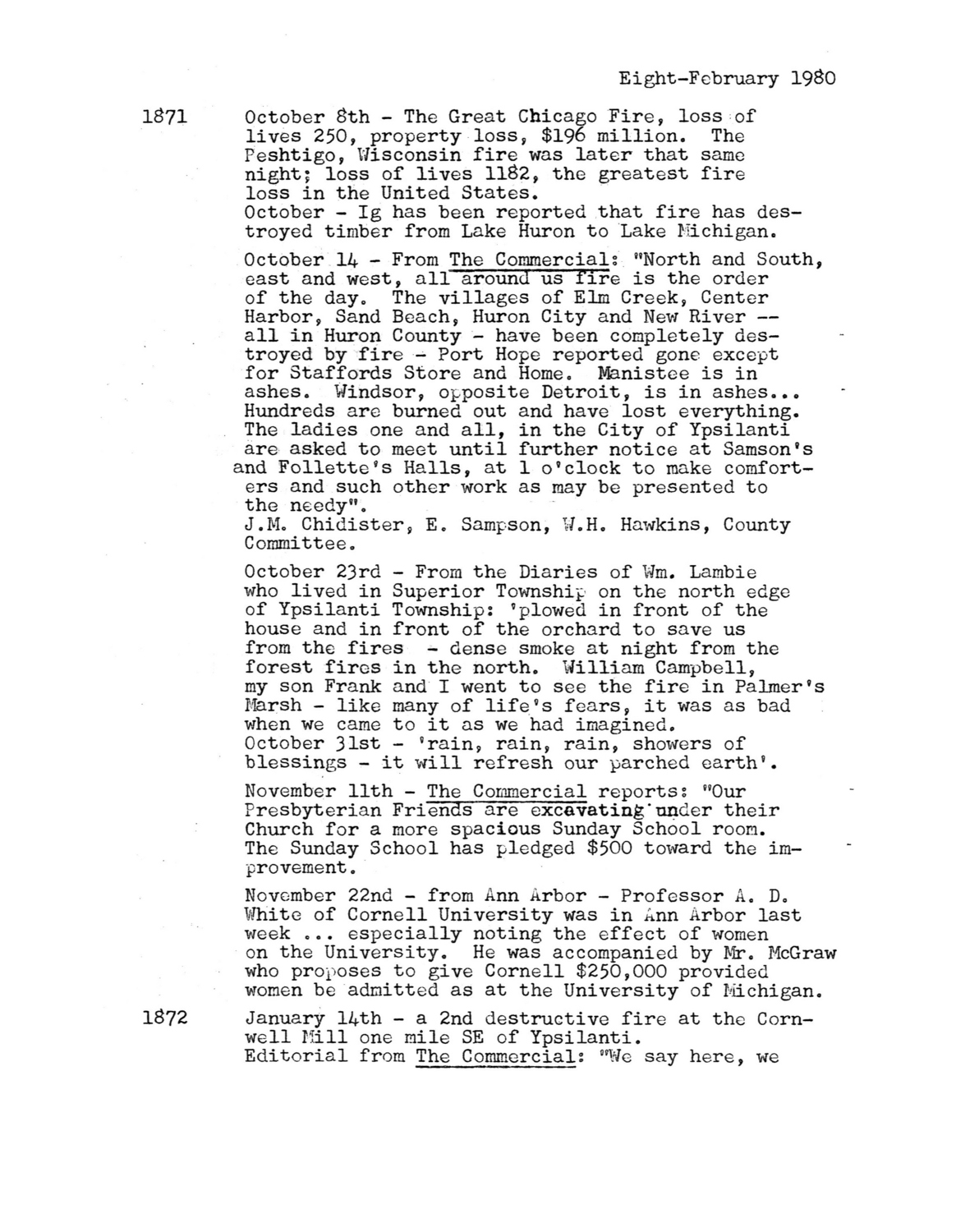 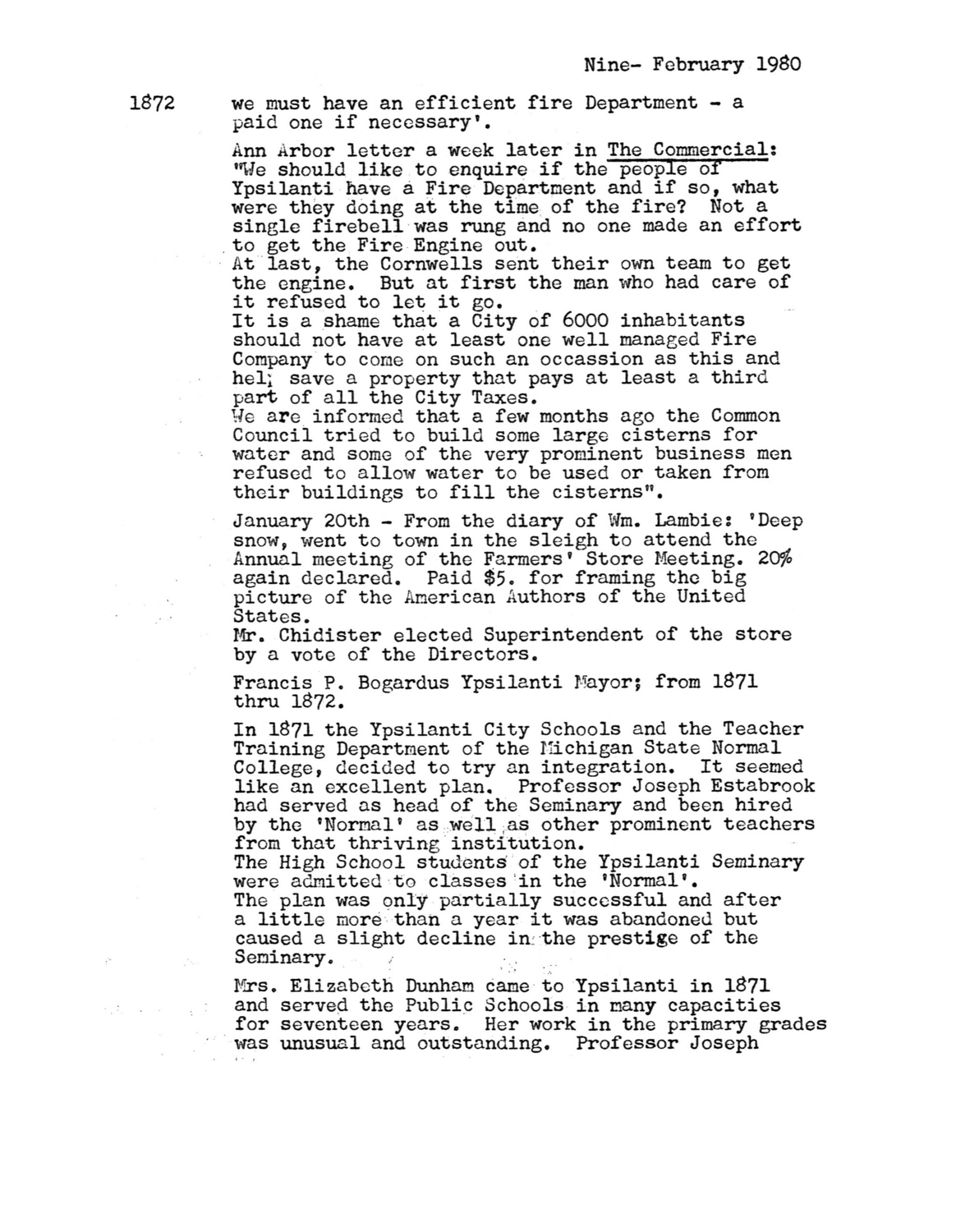 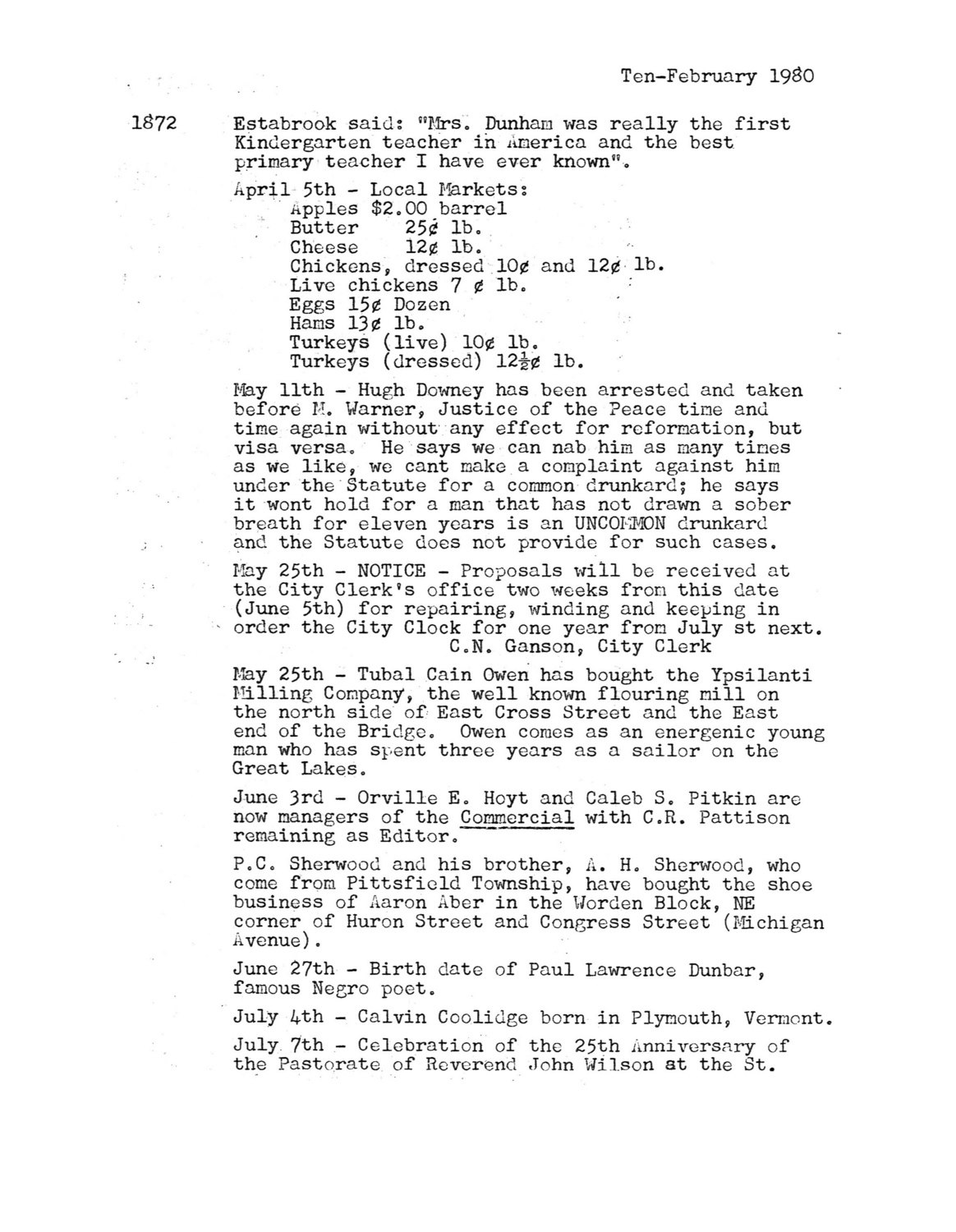 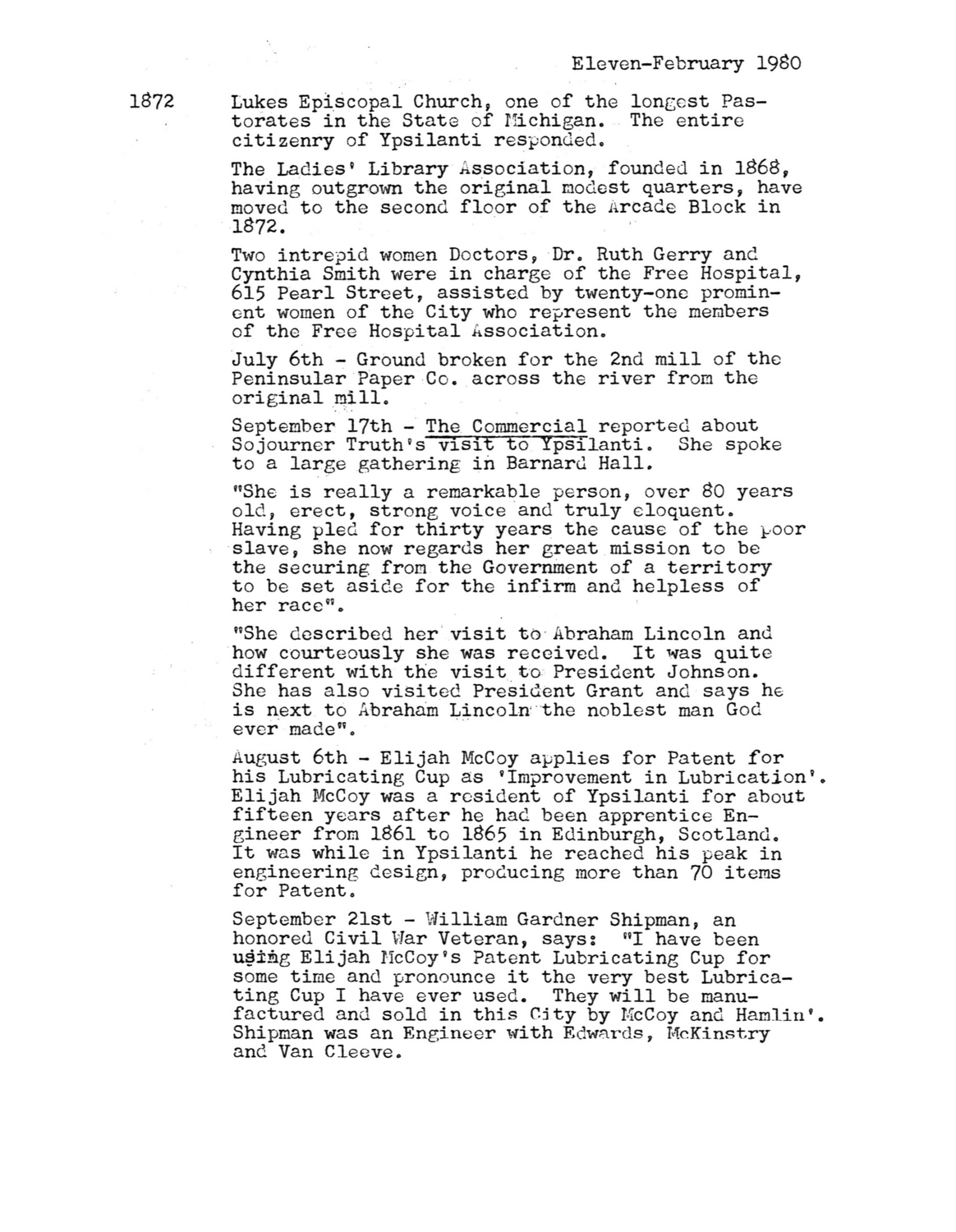 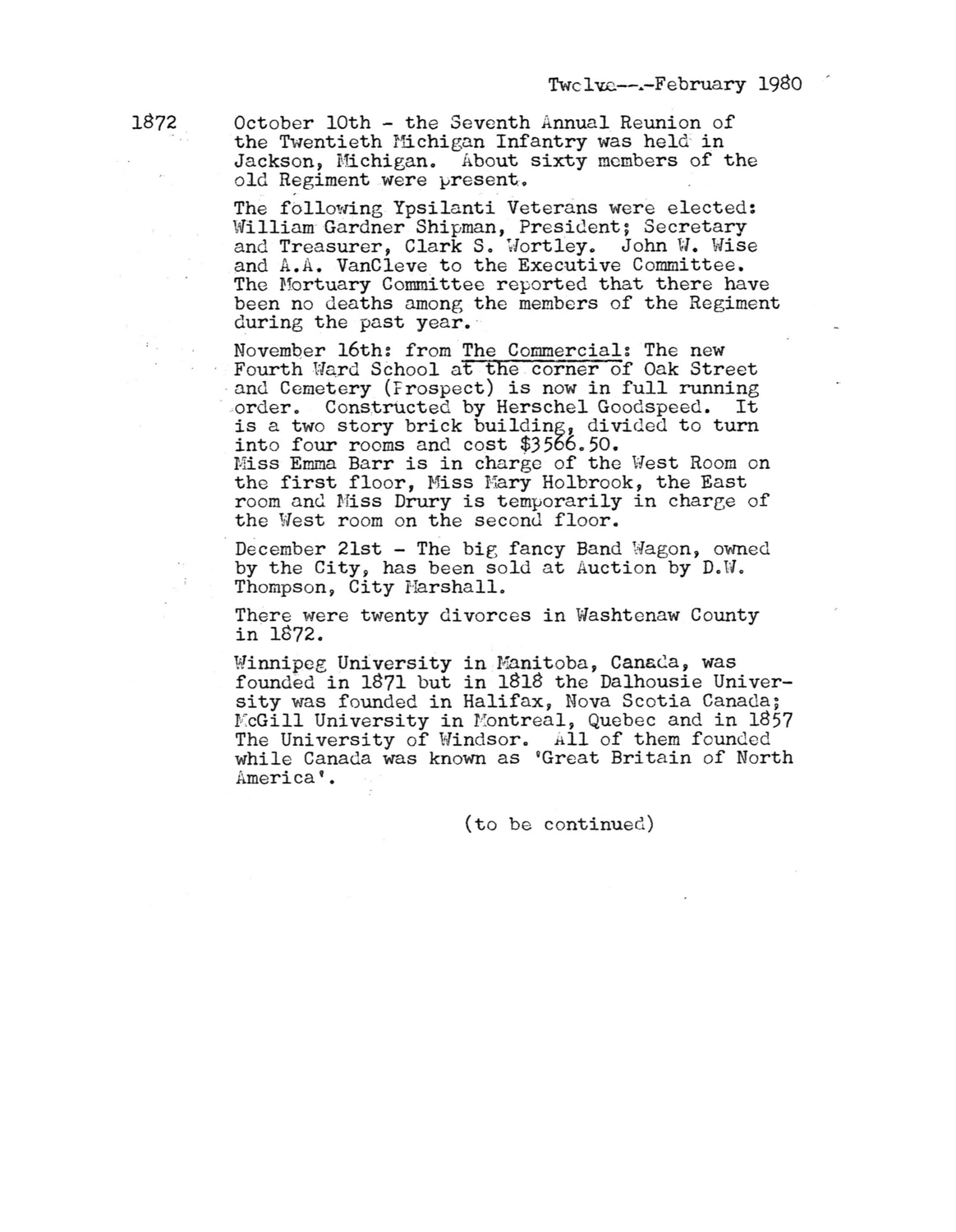 The Cornwell Paper Mill at Lowell was extensively damaged by fire.
The Shade block built at NE corner of old East Congress and Park Street by Leopold Shade.
November 10th-Henry M. Stanley found a man in the wilds of Africa and greeted him: “Dr. Livingston I presume?” It was indeed Dr. David Livingston. This famous explorer died in the wilds of Africa May 1 1873. 1871 October 8th-The Great Chicago Fire, loss of lives 250, property loss, $196 million. The Peshtigo, Wisconsin fire was later that same night; loss of lives 1182, the greatest fire loss in the United States.
October-Ig has been reported that fire has destroyed timber from Lake Huron to Lake Michigan.
October 14-From The Commercial: “North and South, east and west, all around us fire is the order of the day. The villages of Elm Creek, Center Harbor, Sand Beach, Huron City and New River – all in Huron County-have been completely destroyed by fire-Port Hope reported gone except for Staffords Store and Home. Manistee is in ashes. Windsor, opposite Detroit, is in ashes … Hundreds are burned out and have lost everything. The ladies one and all, in the City of Ypsilanti are asked to meet until further notice at Samson's and Follette's Halls, at 1 o'clock to make comforters and such other work as may be presented to the needy”.
J.M. Chidister, E. Sampson, W.H. Hawkins, County Committee.
October 23rd-From the Diaries of Wm. Lambie who lived in Superior Township on the north edge of Ypsilanti Township: 'plowed in front of the house and in front of the orchard to save us from the fires-dense smoke at night from the forest fires in the north. William Campbell, my son Frank and I went to see the fire in Palmer's Marsh-like many of life's fears, it was as bad when we came to it as we had imagined.
October 31st-'rain, rain, rain, showers of blessings-it will refresh our parched earth'.
November 11th-The Commercial reports: “Our Presbyterian Friends are excavating under their Church for a more spacious Sunday School room. The Sunday School has pledged $500 toward the improvement.
November 22nd-from Ann Arbor-Professor A. D. White of Cornell University was in Ann Arbor last week…especially noting the effect of women on the University. He was accompanied by Mr. McGraw who proposes to give Cornell $250,000 provided women be admitted as at the University of Michigan. 1872 January 14th-a 2nd destructive fire at the Cornwell Mill one mile SE of Ypsilanti.
Editorial from The Commercial: “We say here, we we must have an efficient fire Department-a paid one if necessary'.
Ann Arbor letter a week later in The Commercial: “We should like to enquire if the people of Ypsilanti have a Fire Department and if so, what were they doing at the time of the fire? Not a single firebell was rung and no one made an effort to get the Fire Engine out.
At last, the Cornwells sent their own team to get the engine. But at first the man who had care of it refused to let it go.
It is shame that a City of 6000 inhabitants should not have at least one well managed Fire Company to come on such an occassion as this and hell save a property that pays at least a third part of all the City Taxes.
We are informed that a few months ago the Common Council tried to build some large cisterns for water and some of the very prominent business men refused to allow water to be used or taken from their buildings to fill the cisterns”.
January 20th-From the diary of Wm. Lambie: 'Deep snow, went to town in the sleigh to attend the Annual meeting of the Farmers' Store Meeting. 20% again declared. Paid $5. for framing the big picture of the American Authors of the United States.
Mr. Chidister elected Superintendent of the store by a vote of the Directors.
Francis P. Bogardus Ypsilanti Mayor; from 1871 thru 1872.
In 1871 the Ypsilanti City Schools and the Teacher Training Department of the Michigan State Normal College, decided to try an integration. It seemed like an excellent plan. Professor Joseph Estabrook had served as head of the Seminary and been hired by the ‘Normal’ as well as other prominent teachers from that thriving institution.
The High School students of the Ypsilanti Seminary were admitted to classes in the ‘Normal’.
The plan was only partially successful and after a little more than a year it was abandoned but caused a slight decline in the prestige of the Seminary.
Mrs. Elizabeth Dunham came to Ypsilanti in 1871 and served the Public Schools in many capacities for seventeen years. Her work in the primary grades was unusual and outstanding. Professor Joseph Estabrook said: “Mrs. Dunham was really the first Kindergarten teacher in America and the best primary teacher I have ever known”.
April 5th-Local Markets:
Apples $2.00 barrel
Butter 25¢ 1b.
Cheese 12¢ 1b.
Chickens, dressed 10¢ and 12¢ 1b.
Live chickens 7 ¢ 1b.
Eggs 15¢ Dozen
Hams 13¢ 1b.
Turkeys (live) 10¢ 1b.
Turkeys (dressed) 12&half;¢ 1b.
May 11th-Hugh Downey has been arrested and taken before M. Warner, Justice of the Peace time and time again without any effect for reformation, but visa versa. He says we can nab him as many times as we like, we cant make a complaint against him under the Statute for a common drunkard; he says it wont hold for a man that has not drawn a sober breath for eleven years is an UNCOMMON drunkard and the Statute does not provide for such cases.
May 25th-NOTICE-Proposals will be received at the City Clerk's office two weeks from this date (June 5th) for repairing, winding and keeping in order the City Clock for one year from July st next.
C.N. Ganson, City Clerk

May 25th-Tubal Cain Owen has bought the Ypsilanti Milling Company, the well known flouring mill on the north side of East Cross Street and the East end of the Bridge. Owen comes as an energenic young man who has spent three years as a sailor on the Great Lakes.
June 3rd-Orville E. Hoyt and Caleb S. Pitkin are now managers of the Commercial with C.R. Pattison remaining as Editor.
P.C. Sherwood and his brother, A.H. Sherwood, who come from Pittsfield Township, have bought the shoe business of Aaron Aber in the Worden Block, NE corner of Huron Street and Congress Street (Michigan Avenue).
June 27th-Birth date of Paul Lawrence Dunbar, famous Negro poet.
July 4th-Calvin Coolidge born in Plymouth, Verment.
July 7th-Celebration of the 25th Anniversary of the Pastorate of Reverend John Wilson at the St. Lukes Episcopal Church, one of the longest Pastorates in the State of Michigan. The entire citizenry of Ypsilanti responded.
The Ladies' Library Association, founded in 1868, having outgrown the original modest quarters, have moved to the second floor of the Arcade Block in 1872.
Two intrepid women Doctors, Dr. Ruth Gerry and Cynthia Smith were in charge of the Free Hospital, 615 Pearl Street, assisted by twenty-one prominent women of the City who represent the members of the Free Hospital Association.
July 6th-Ground broken for the 2nd mill of the Peninsular Paper Co. across the river from the original mill.
September 17th-The Commercial reported about Sojourner Truth's visit to Ypsilanti. She spoke to a large gathering in Barnard Hall.
“She is really a remarkable person, over 80 years old, erect, strong voice and truly eloquent. Having pled for thirty years the cause of the poor slave, she now regards her great mission to be the securing from the Government of a territory to be set aside for the infirm and helpless of her race”.
“She described her visit to Abraham Lincoln and how courteously she was received. It was quite different with the visit to President Johnson. She has also visited President Grant and says he is next to Abraham Lincoln the noblest man God ever made”.
August 6th-Elijah McCoy applies for Patent for his Lubricating Cup as ‘Improvement in Lubrication’. Elijah McCoy was a resident of Ypsilanti for about fifteen years after he had been apprentice Engineer from 1861 to 1865 in Edinburgh, Scotland. It was while in Ypsilanti he reached his peak in engineering design, producing more than 70 items for Patent.
September 21st-William Gardner Shipman, an honored Civil War Veteran, says: “I have been using Elijah McCoy's Patent Lubricating Cup for some time and pronounce it the very best Lubricating Cup I have ever used. They will be manufactured and sold in this City by McCoy and Hamlin'. Shipman was an Engineer with Edwards, McKinstry and Van Cleeve. 1872 October 10th-the Seventh Annual Reunion of the Twentieth Michigan Infantry was held in Jackson, Michigan. About sixty members of the old Regiment were present.
The following Ypsilanti Veterans were elected: William Gardner Shipman, President; Secretary and Treasurer, Clark S. Wortley. John W. Wise and A.A. VanCleve to the Executive Committee. The Mortuary Committee reported that there have been no deaths among the members of the Regiment during the past year.
November 16th: from The Commercial: The new Fourth Ward School at the corner of Oak Street and Cemetery (Frospect) is now in full runing order. Constructed by Herschel Goodspeed. It is a two story brick building, divided to turn into four rooms and cost $3566.50.
Miss Emma Barr is in charge of the West Room on the first floor, Miss Mary Holbrook, the East room and Miss Drury is temporarily in charge of the West room on the second floor.
December 21st-The big fancy Band Wagon, owned by the City, has been sold at Auction by D.W. Thompson, City Marshall.
There were twenty divorces in Washtenaw County in 1872.
Winnipeg University in Manitoba, Canada, was founded in 1871 but in 1818 the Dalhousie University was founded in Halifax, Nova Scotia Canada; McGill University in Montreal, Quebec and in 1857 The University of Windsor. All of them founded while Canada was known as ‘Great Britain of North America’.