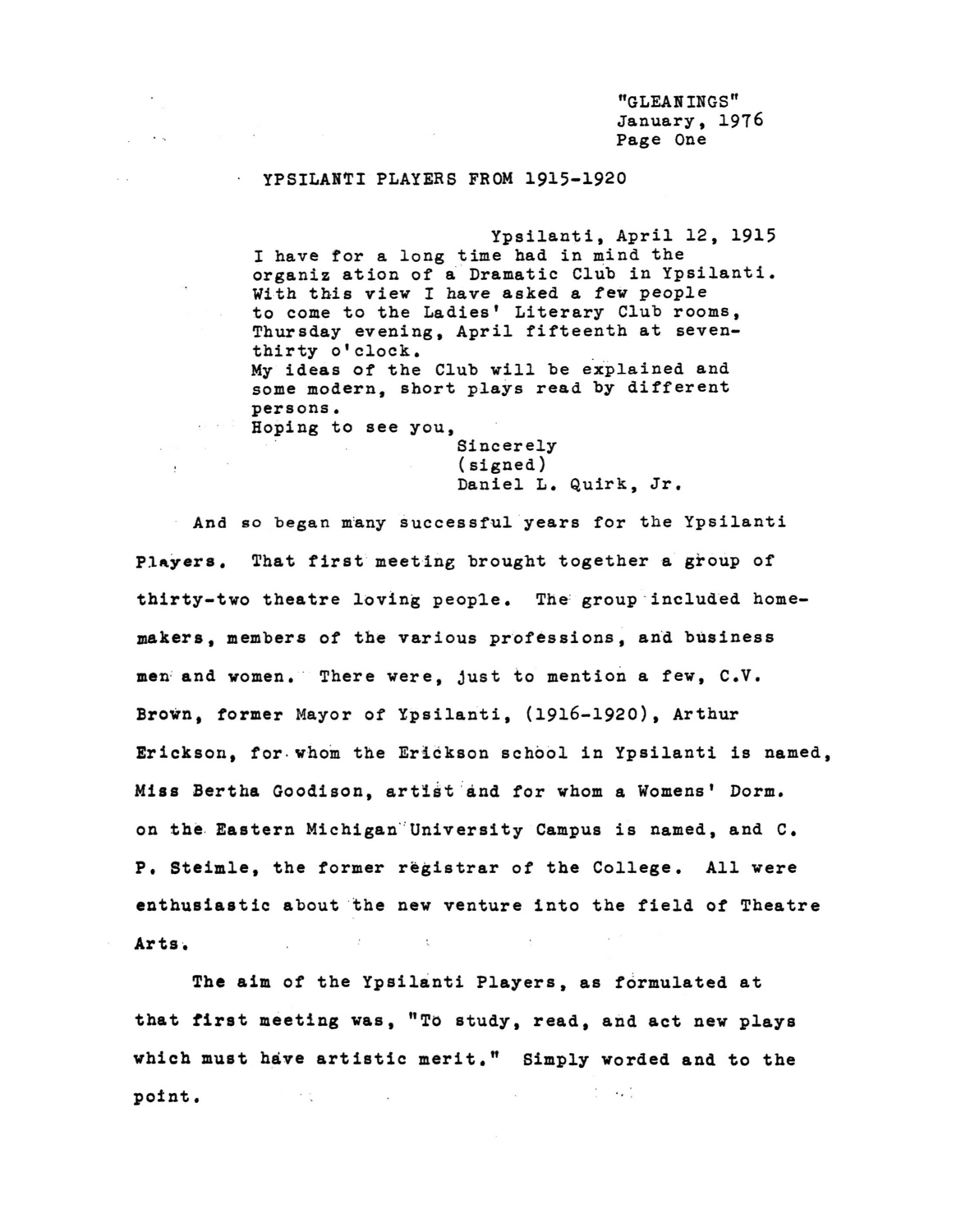 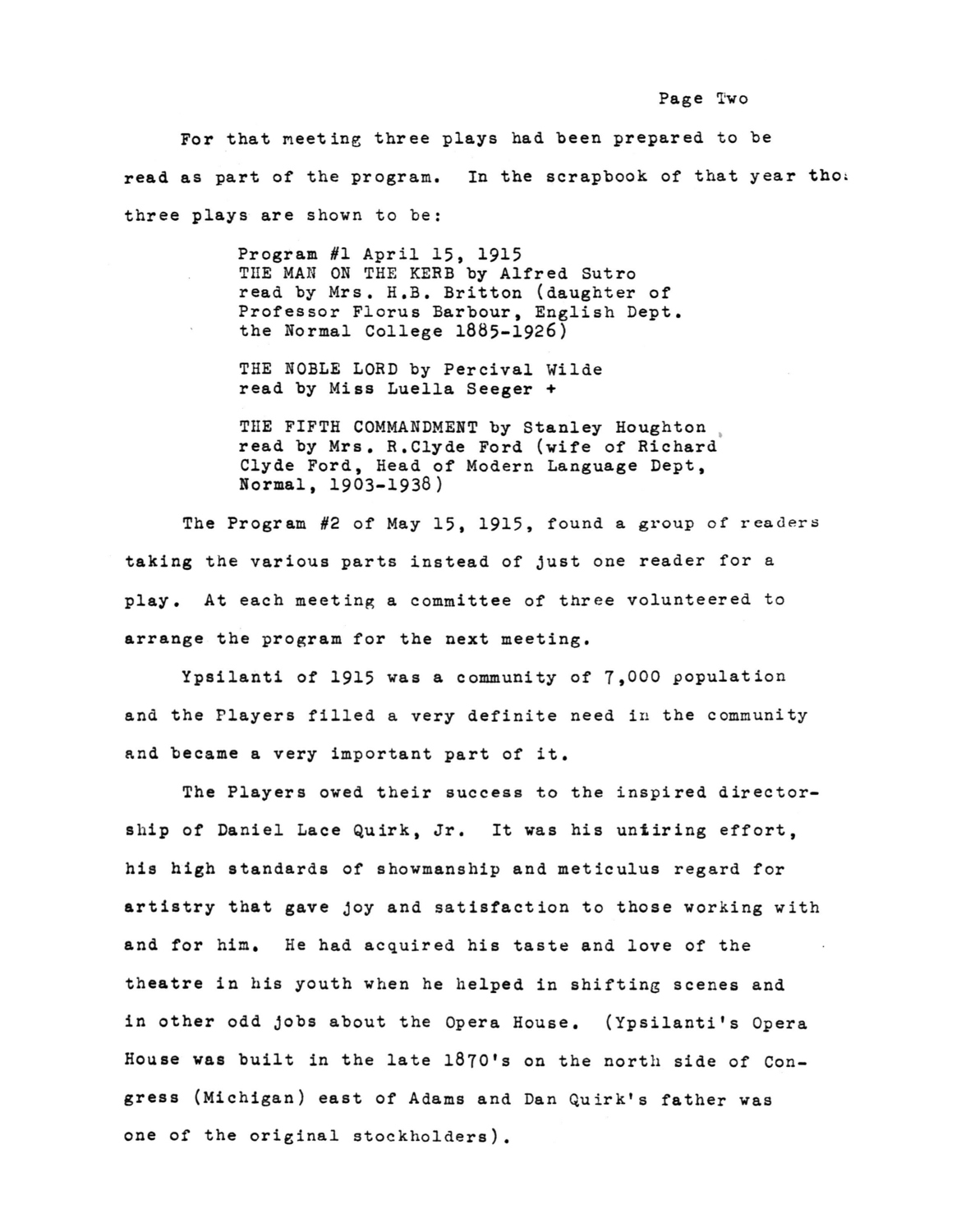 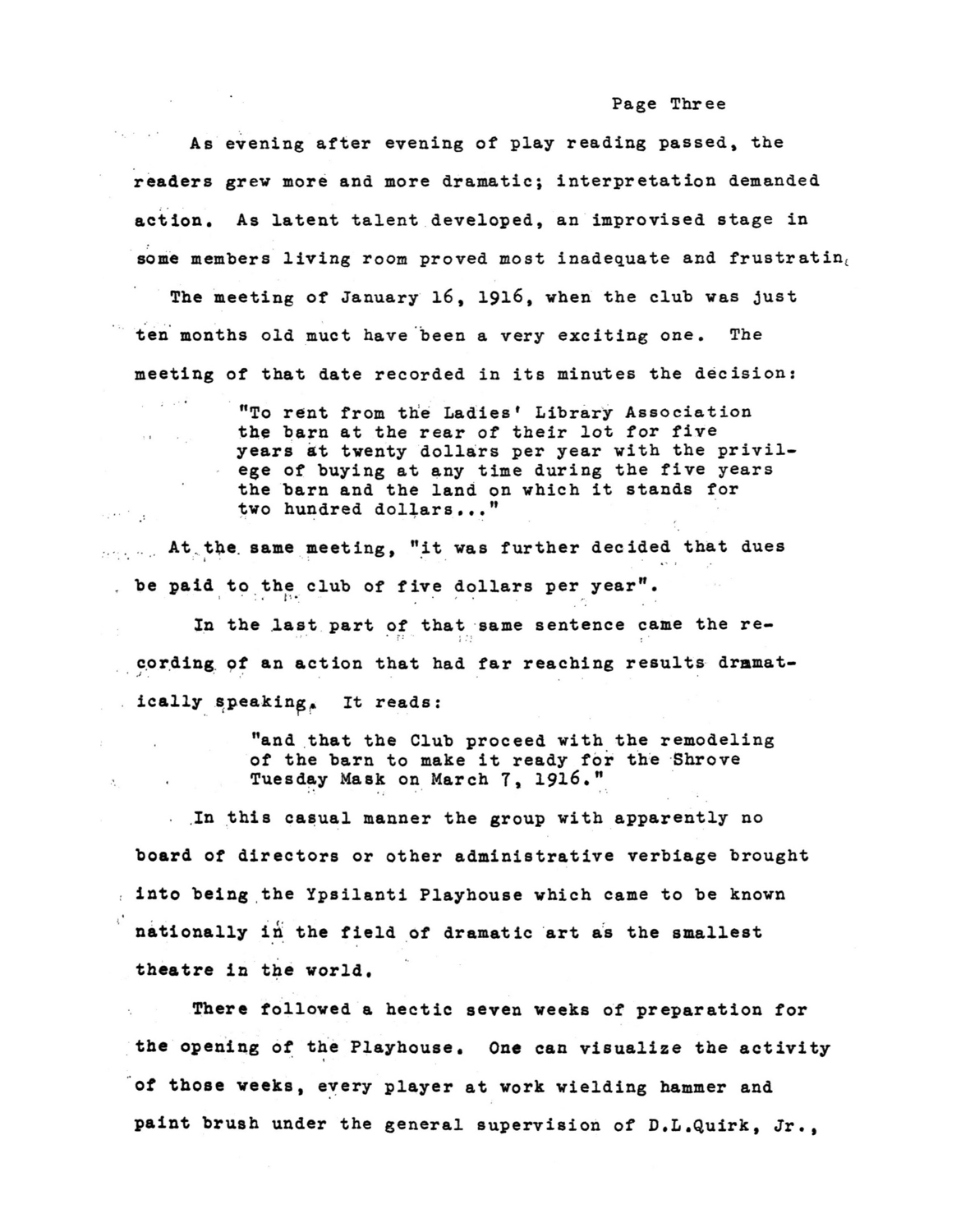 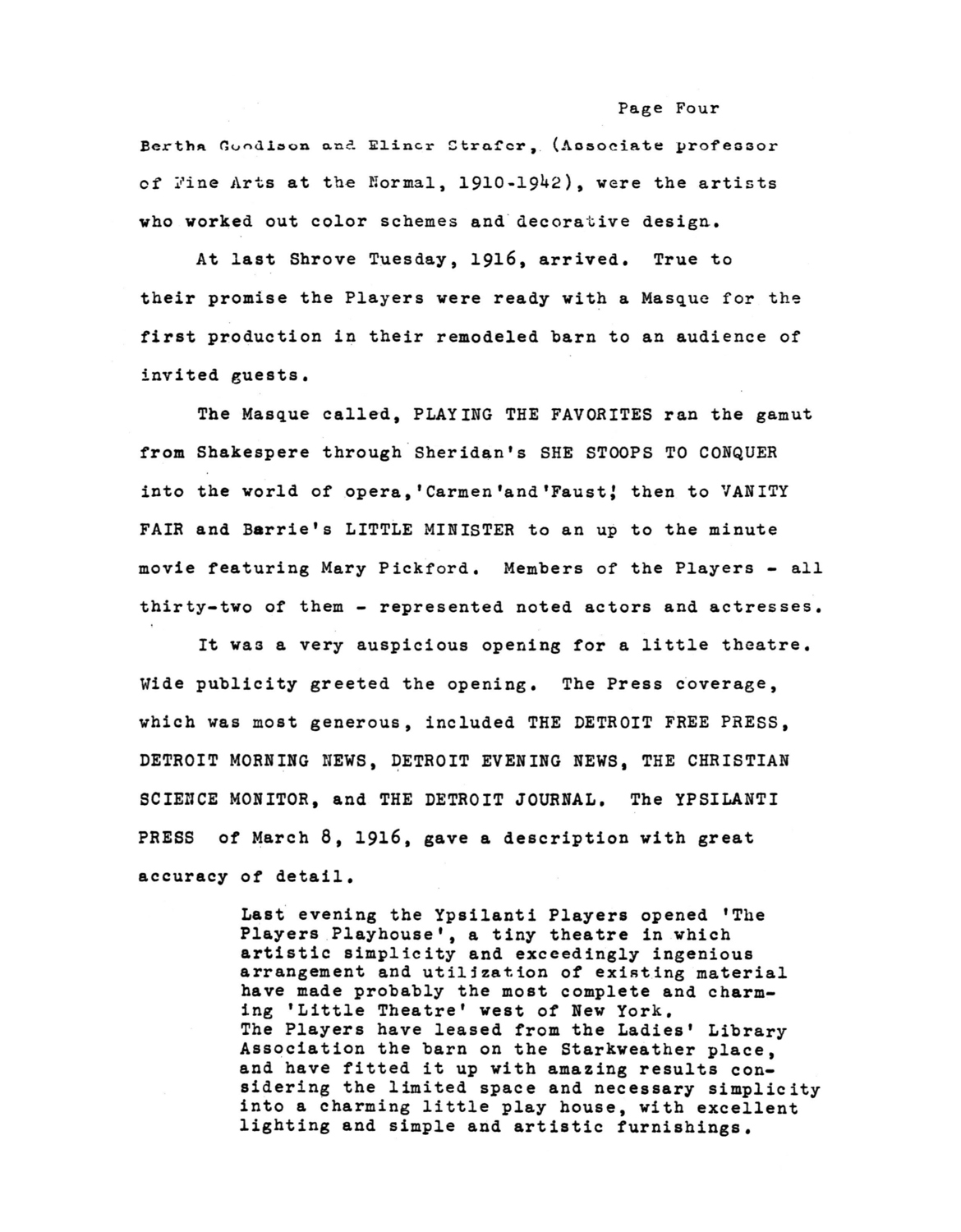 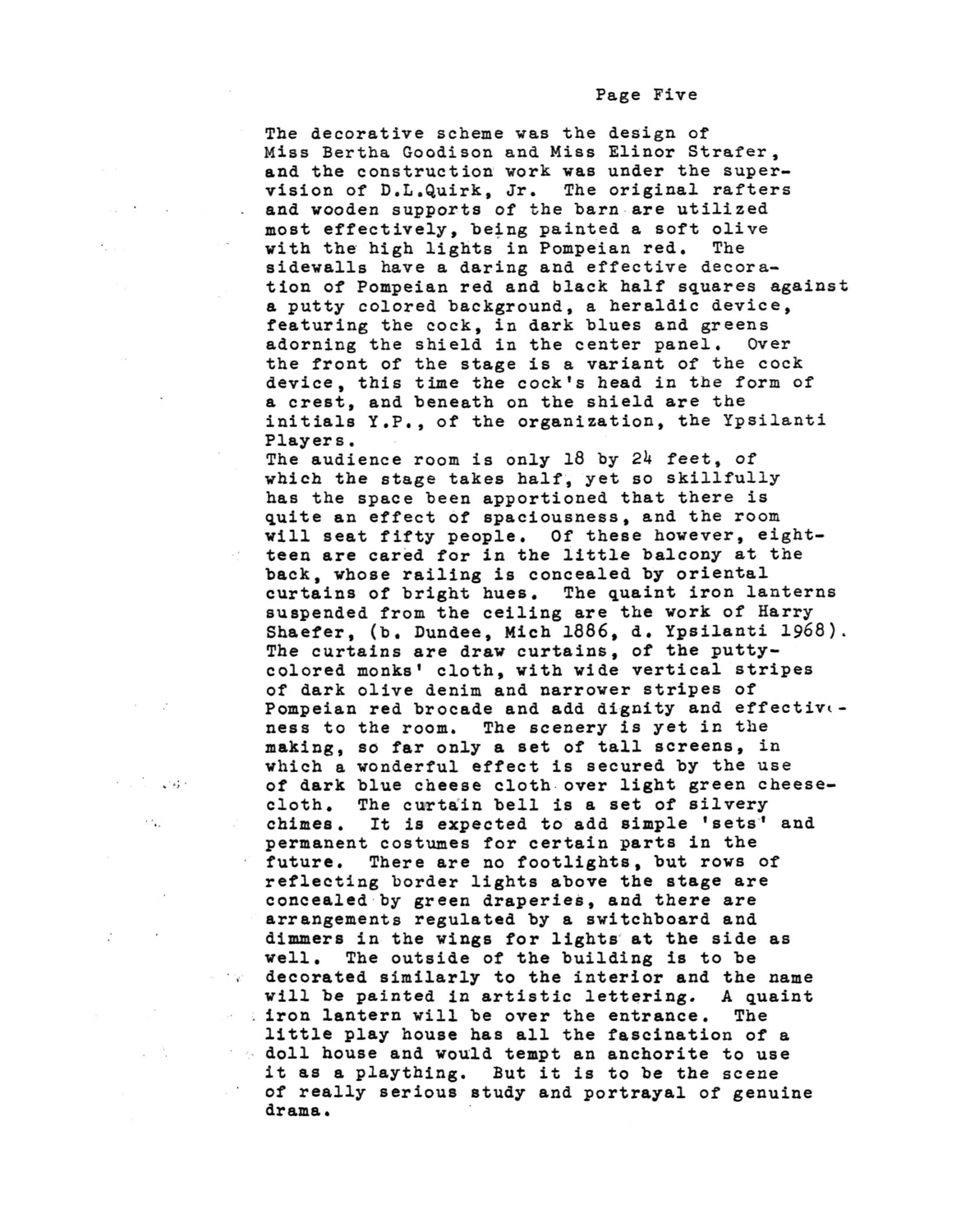 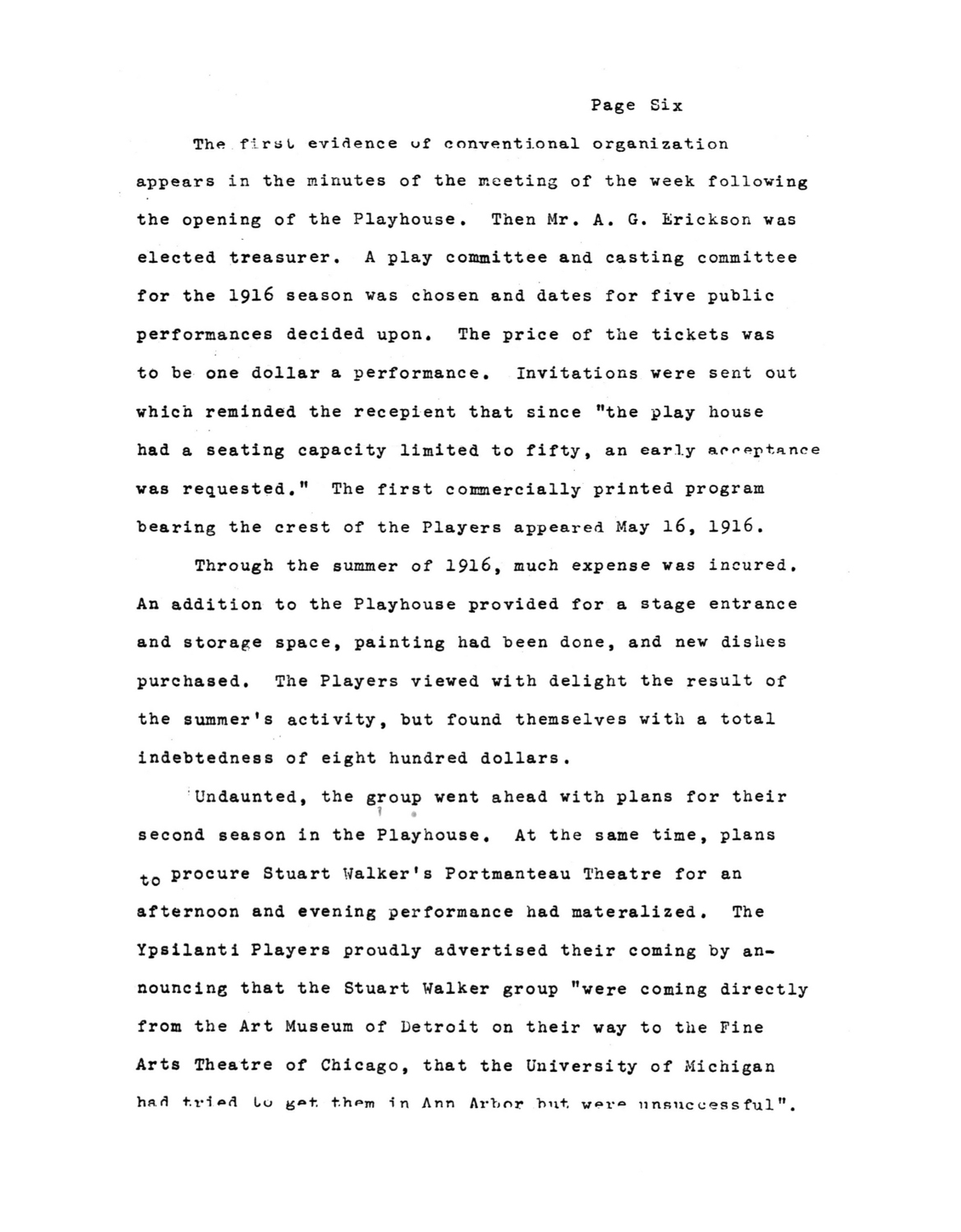 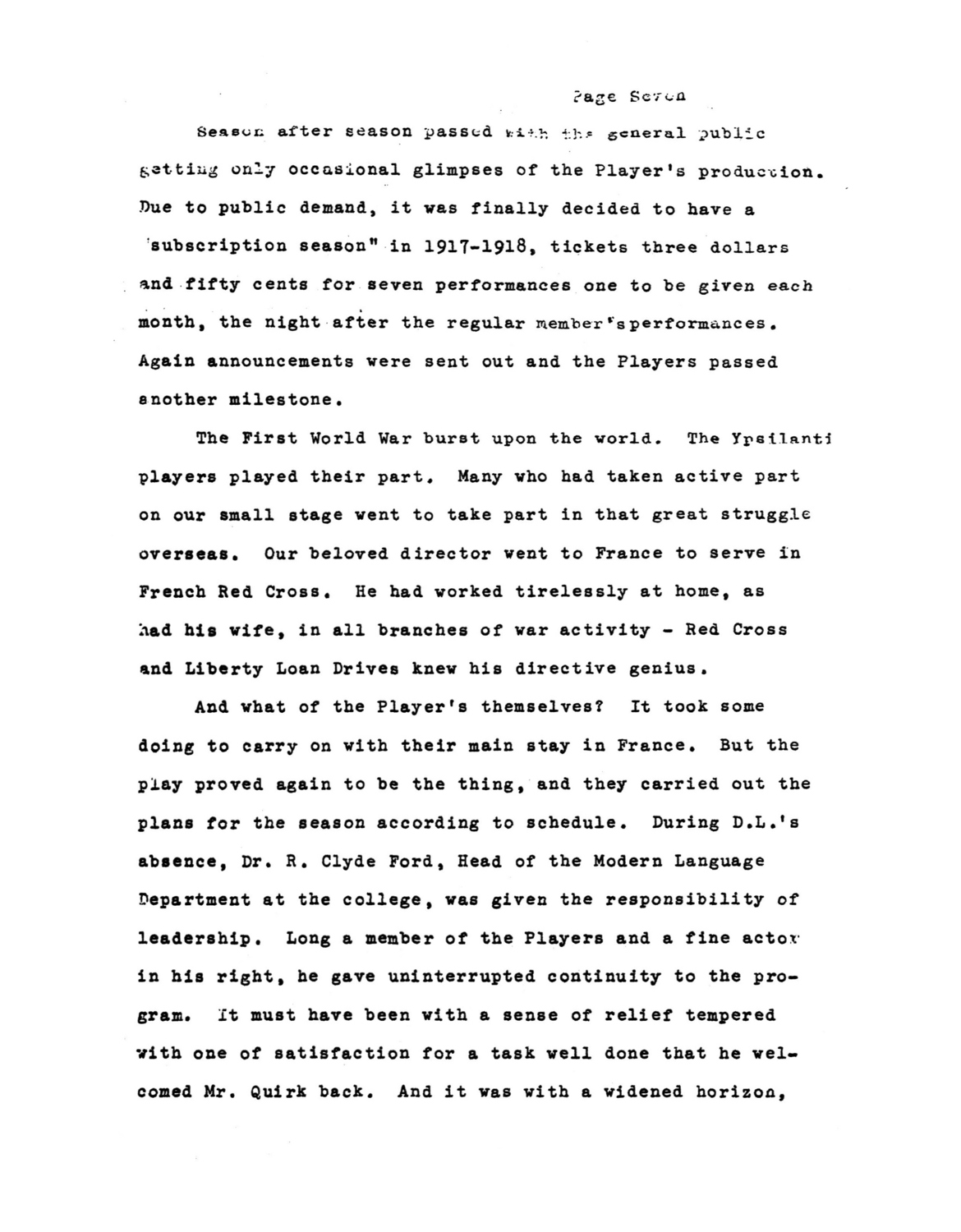 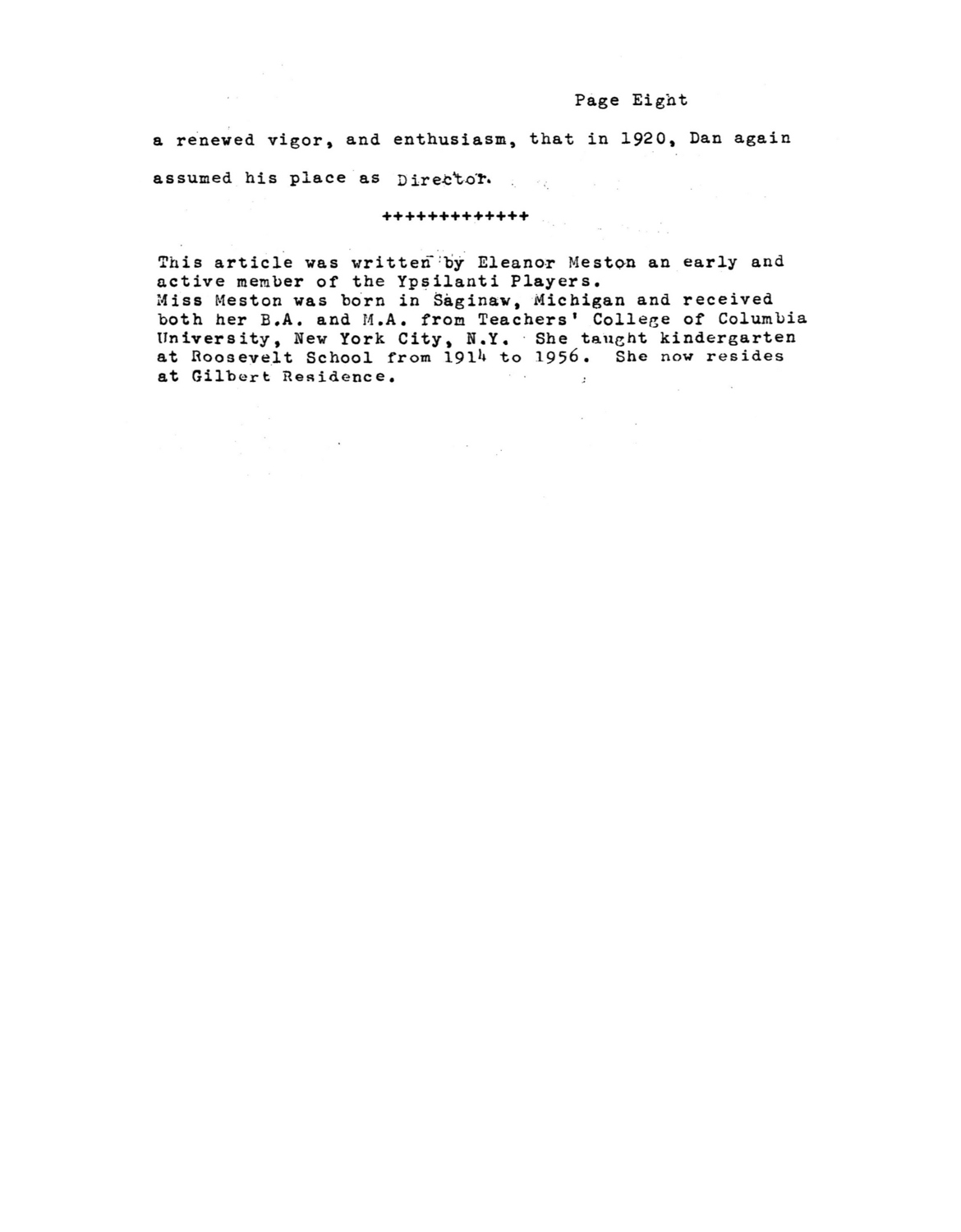 "I have for a long time had in mind the organiz ation of a Dramatic Club in Ypsilanti. With this view I have asked a few people to come to the Ladies' Literary Club rooms, Thursday evening, April fifteenth at seven-thirty o'clock. My ideas of the Club will be explained and some modern, short plays read by different persons.

Hoping to see you,

And so began many successful years for the Ypsilanti Players. That first meeting brought together a group of thirty-two theatre loving people. The group included home-makers, members of the various professions, and business men and women. There were, just to mention a few, C.V. Brown, former Mayor of Ypsilanti, (1916–1920), Arthur Erickson, for whom the Erickson school in Ypsilanti is named, Miss Bertha Goodison, artist and for whom a Womens' Dorm. on the Eastern Michigan University Campus is named, and C. P. Steimle, the former registrar of the College. All were enthusiastic about the new venture into the field of Theatre Arts.

The aim of the Ypsilanti Players, as formulated at that first meeting was, "To study, read, and act new plays which must have artistic merit." Simply worded and to the point.

For that meeting three plays had been prepared to be read as part of the program. In the scrapbook of that year those three plays are shown to be:

THE NOBLE LORD by Percival Wilde read by Miss Luella Seeger &plus;

The Program #2 of May 15, 1915, found a group of readers taking the various parts instead of just one reader for a play. At each meeting a committee of three volunteered to arrange the program for the next meeting.

Ypsilanti of 1915 was a community of 7,000 population and the Players filled a very definite need in the community and became a very important part of it.

The Players owed their success to the inspired director-ship of Daniel Lace Quirk, Jr. It was his unfiring effort, his high standards of showmanship and meticulus regard for artistry that gave joy and satisfaction to those working with and for him. He had acquired his taste and love of the theatre in his youth when he helped in shifting scenes and in other odd jobs about the Opera House. (Ypsilanti's Opera House was built in the late 1870's on the north side of Congress (Michigan) east of Adams and Dan Quirk's father was one of the original stockholders).

As evening after evening of play reading passed, the readers grew more and more dramatic; interpretation demanded action. As latent talent developed, an improvised stage in some members living room proved most inadequate and frustratin.

The meeting of January 16, 1916, when the club was just ten months old muct have been a very exciting one. The meeting of that date recorded in its minutes the decision:

At the same meeting, “it was further decided that dues be paid to the club of five dollars per year”.

In the last part of that same sentence came the re-cording of an action that had far reaching results dramatically speaking. It reads:

“and that the Club proceed with the remodeling of the barn to make it ready for the Shrove Tuesday Mask on March 7, 1916.”

In this casual manner the group with apparently no board of directors or other administrative verbiage brought into being the Ypsilanti Playhouse which came to be known nationally in the field of dramatic art as the smallest theatre in the world.

There followed a hectic seven weeks of preparation for the opening of the Playhouse. One can visualize the activity of those weeks, every player at work wielding hammer and paint brush under the general supervision of D.L.Quirk, Jr., Bertha Goodison and Elinor Strafor, (Aosociate professor of Fine Arts at the Normal, 1910–1942), were the artists who worked out color schemes and decorative design.

At last Shrove Tuesday, 1916, arrived. True to their promise the Players were ready with a Masque for the first production in their remodeled barn to an audience of invited guests.

The Masque called, PLAYING THE FAVORITES ran the gamut from Shakespere through Sheridan's SHE STOOPS TO CONQUER into the world of opera, ‘Carmen’ and ‘Faust’, then to VANITY FAIR and Barrie's LITTLE MINISTER to an up to the minute movie featuring Mary Pickford. Members of the Players-all thirty-two of them-represented noted actors and actresses.

It was a very auspicious opening for a little theatre. Wide publicity greeted the opening. The Press coverage, which was most generous, included THE DETROIT FREE PRESS, DETROIT MORNING NEWS, DETROIT EVENING NEWS, THE CHRISTIAN SCIENCE MONITOR, and THE DETROIT JOURNAL. The YPSILANTI Press of March 8, 1916, gave a description with great accuracy of detail.

Last evening the Ypsilanti Players opened ‘The Players Playhouse’, a tiny theatre in which artistic simplicity and exceedingly ingenious arrangement and utilization of existing material have made probably the most complete and charming ‘Little Theatre’ west of New York. The Players have leased from the Ladies' Library Association the barn on the Starkweather place, and have fitted it up with amazing results con-sidering the limited space and necessary simplicity into a charming little play house, with excellent lighting and simple and artistic furnishings.

The decorative scheme was the design of Miss Bertha Goodison and Miss Elinor Strafer, and the construction work was under the super-vision of D.L.Quirk, Jr. The original rafters and wooden supports of the barn are utilized most effectively, being painted a soft olive with the high lights in Pompeian red. The sidewalls have a daring and effective decoration of Pompeian red and black half squares against a putty colored background, a heraldic device, featuring the cock, in dark blues and greens adorning the shield in the center panel. Over the front of the stage is a variant of the cock device, this time the cock's head in the form of a crest, and beneath on the shield are the initials Y.P., of the organization, the Ypsilanti Players. The audience room is only 18 by 24 feet, of which the stage takes half, yet so skillfully has the space been apportioned that there is quite an effect of spaciousness, and the room will seat fifty people. Of these however, eight-teen are cared for in the little balcony at the back, whose railing is concealed by oriental curtains of bright hues. The quaint iron lanterns suspended from the ceiling are the work of Harry Shaefer, (b. Dundee, Mich 1886, d. Ypsilanti 1968).

The curtains are draw curtains, of the putty-colored monks' cloth, with wide vertical stripes of dark olive denim and narrower stripes of Pompeian red brocade and add dignity and effective-ness to the room. The scenery is yet in the making, so far only a set of tall screens, in which a wonderful effect is secured by the use of dark blue cheese cloth over light green cheese-cloth. The curtain bell is a set of silvery chimes. It is expected to add simple ‘sets’ and permanent costumes for certain parts in the future. There are no footlights, but rows of reflecting border lights above the stage are concealed by green draperies, and there are arrangements regulated by a switchboard and dimmers in the wings for lights at the side as well. The outside of the building is to be decorated similarly to the interior and the name will be painted in artistic lettering. A quaint iron lantern will be over the entrance. The little play house has all the fascination of a doll house and would tempt an anchorite to use it as a plaything. But it is to be the scene of really serious study and portrayal of genuine drama.

The first evidence of conventional organization appears in the minutes of the meeting of the week following the opening of the Playhouse. Then Mr. A. G. Erickson was elected treasurer. A play committee and casting committee for the 1916 season was chosen and dates for five public performances decided upon. The price of the tickets was to be one dollar a performance. Invitations were sent out which reminded the recepient that since “the play house had a seating capacity limited to fifty, an early acceptance was requested.” The first commercially printed program bearing the crest of the Players appeared May 16, 1916.

Through the summer of 1916, much expense was incured. An addition to the Playhouse provided for a stage entrance and storage space, painting had been done, and new dishes purchased. The Players viewed with delight the result of the summer's activity, but found themselves with a total indebtedness of eight hundred dollars.

Undaunted, the group went ahead with plans for their second season in the Playhouse. At the same time, plans to procure Stuart Walker's Portmanteau Theatre for an afternoon and evening performance had materalized. The Ypsilanti Players proudly advertised their coming by an-nouncing that the Stuart Walker group “were coming directly from the Art Museum of Detroit on their way to the Fine Arts Theatre of Chicago, that the University of Michigan had tried to get them in Ann Arbor but were unsuccessful”.

Season after season passed with the general public getting only occasional glimpses of the Player's production. Due to public demand, it was finally decided to have a subscription season” in 1917–1918, tickets three dollars and fifty cents for seven performances one to be given each month, the night after the regular member's performances. Again announcements were sent out and the Players passed another milestone.

The First World War burst upon the world. The Ypsilanti players played their part. Many who had taken active part on our small stage went to take part in that great struggle overseas. Our beloved director went to France to serve in French Red Cross. He had worked tirelessly at home, as had his wife, in all branches of war activity-Red Cross and Liberty Loan Drives knew his directive genius.

And what of the Player's themselves? It took some doing to carry on with their main stay in France. But the play proved again to be the thing, and they carried out the plans for the season according to schedule. During D.L.'s absence, Dr. R. Clyde Ford, Head of the Modern Language Department at the college, was given the responsibility of leadership. Long a member of the Players and a fine actor in his right, he gave uninterrupted continuity to the pro-gram. It must have been with a sense of relief tempered with one of satisfaction for a task well done that he wel-comed Mr. Quirk back. And it was with a widened horizon, a renewed vigor, and enthusiasm, that in 1920, Dan again assumed his place as Director.

This article was written by Eleanor Meston an early and active member of the Ypsilanti Players. Miss Meston was born in Saginaw, Michigan and received both her B.A. and M.A. from Teachers' College of Columbia University, New York City, N.Y. She taught kindergarten at Roosevelt School from 1914 to 1956. She now resides at Gilbert Residence.