A Review of Some Events at the Museum 1979 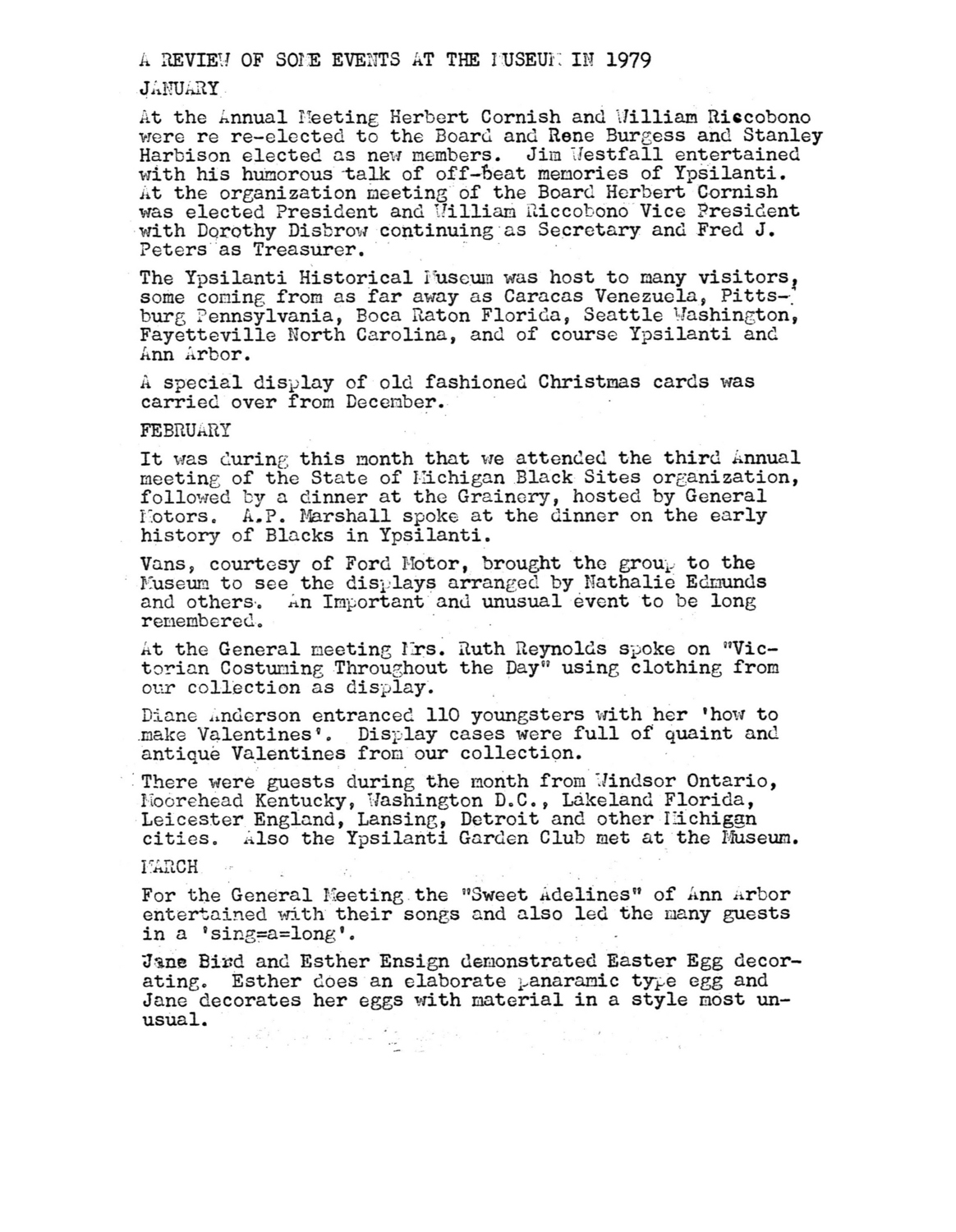 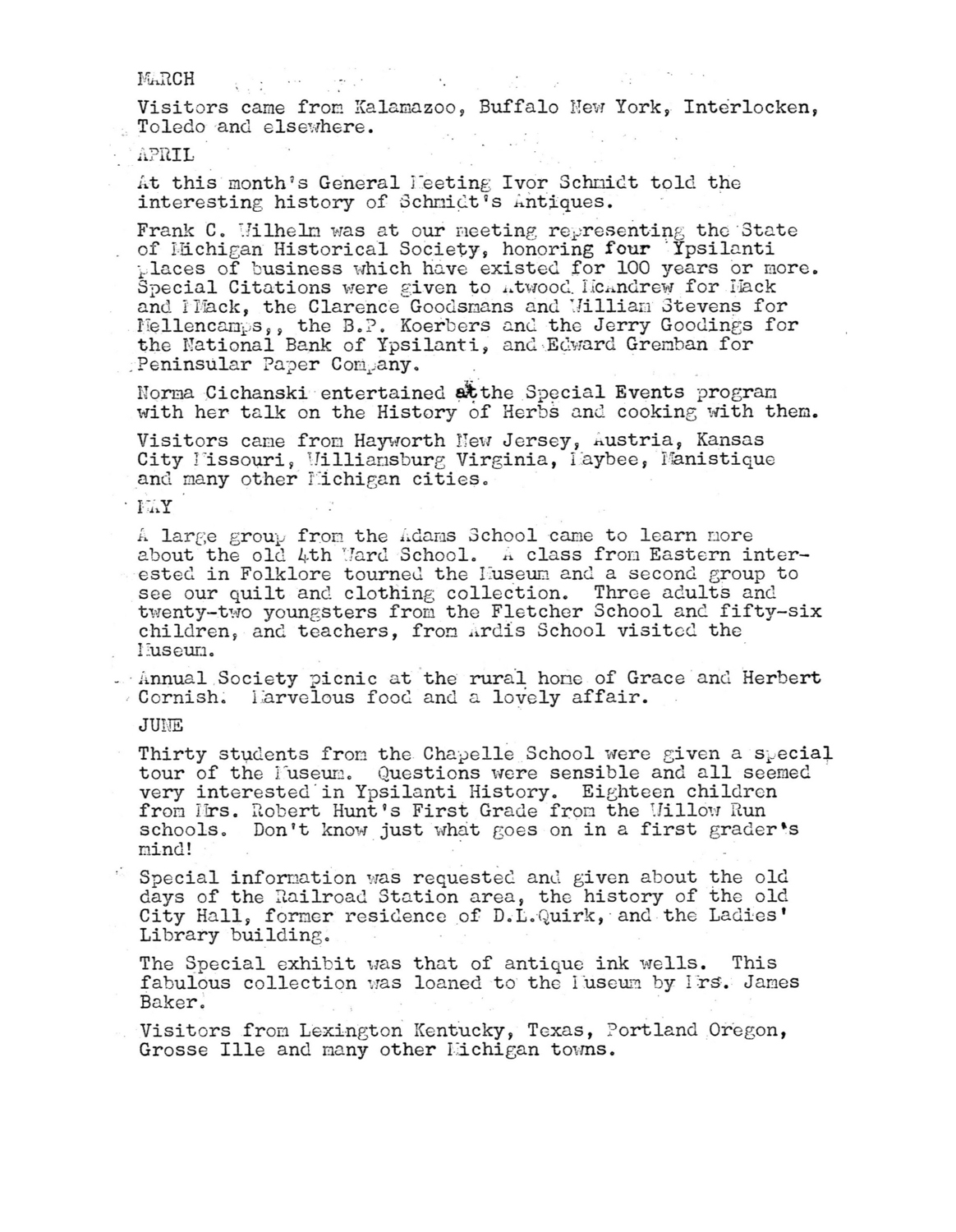 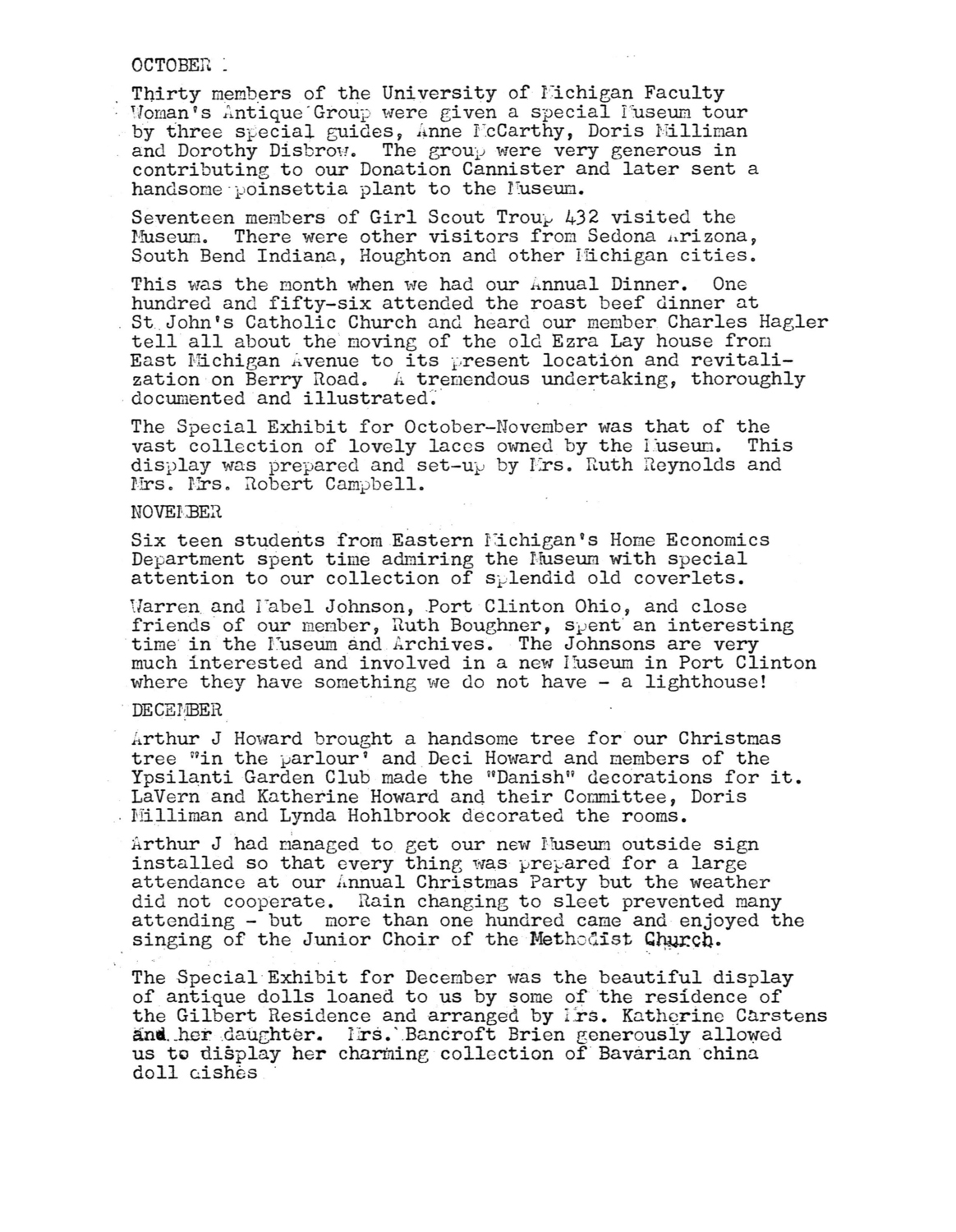 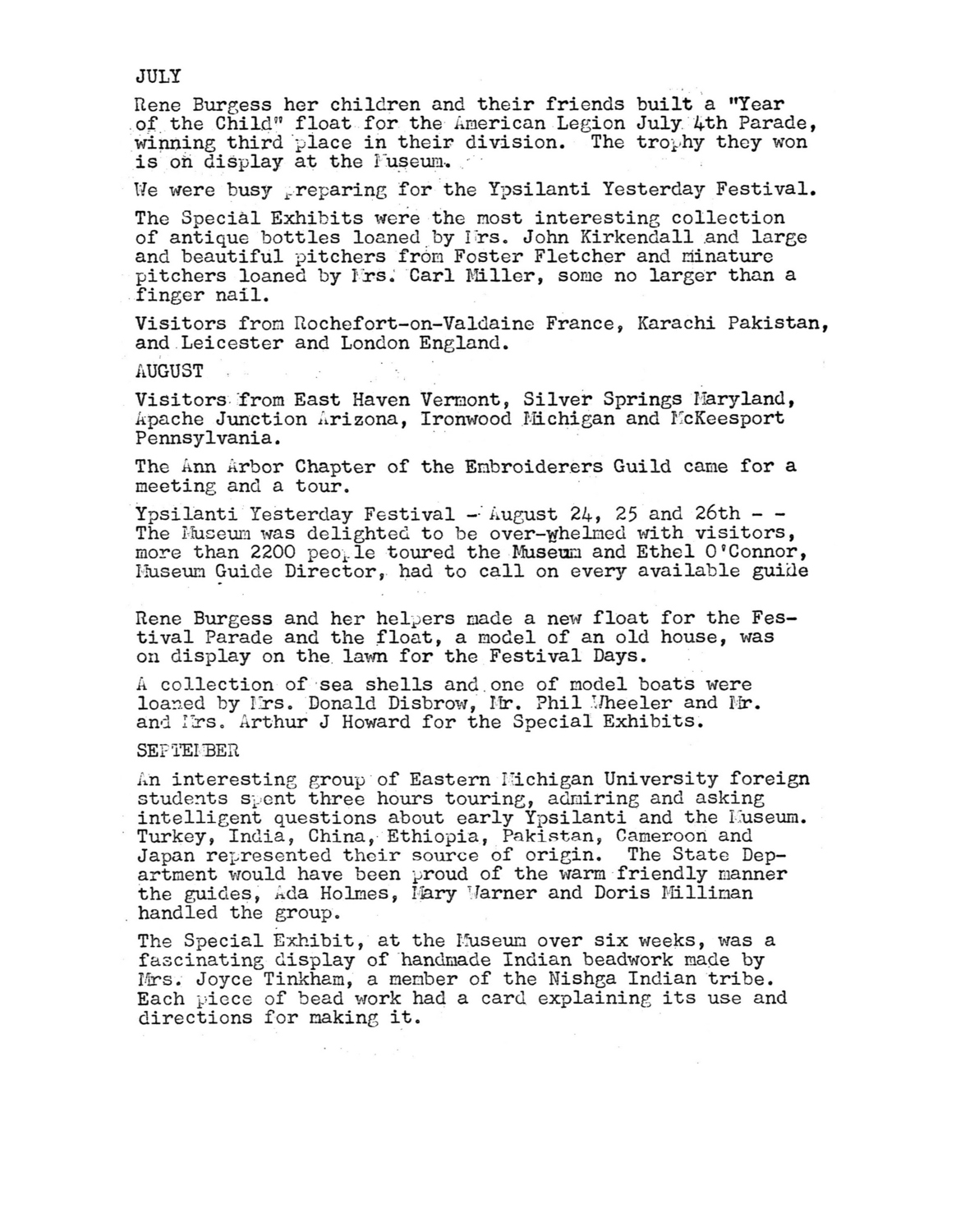 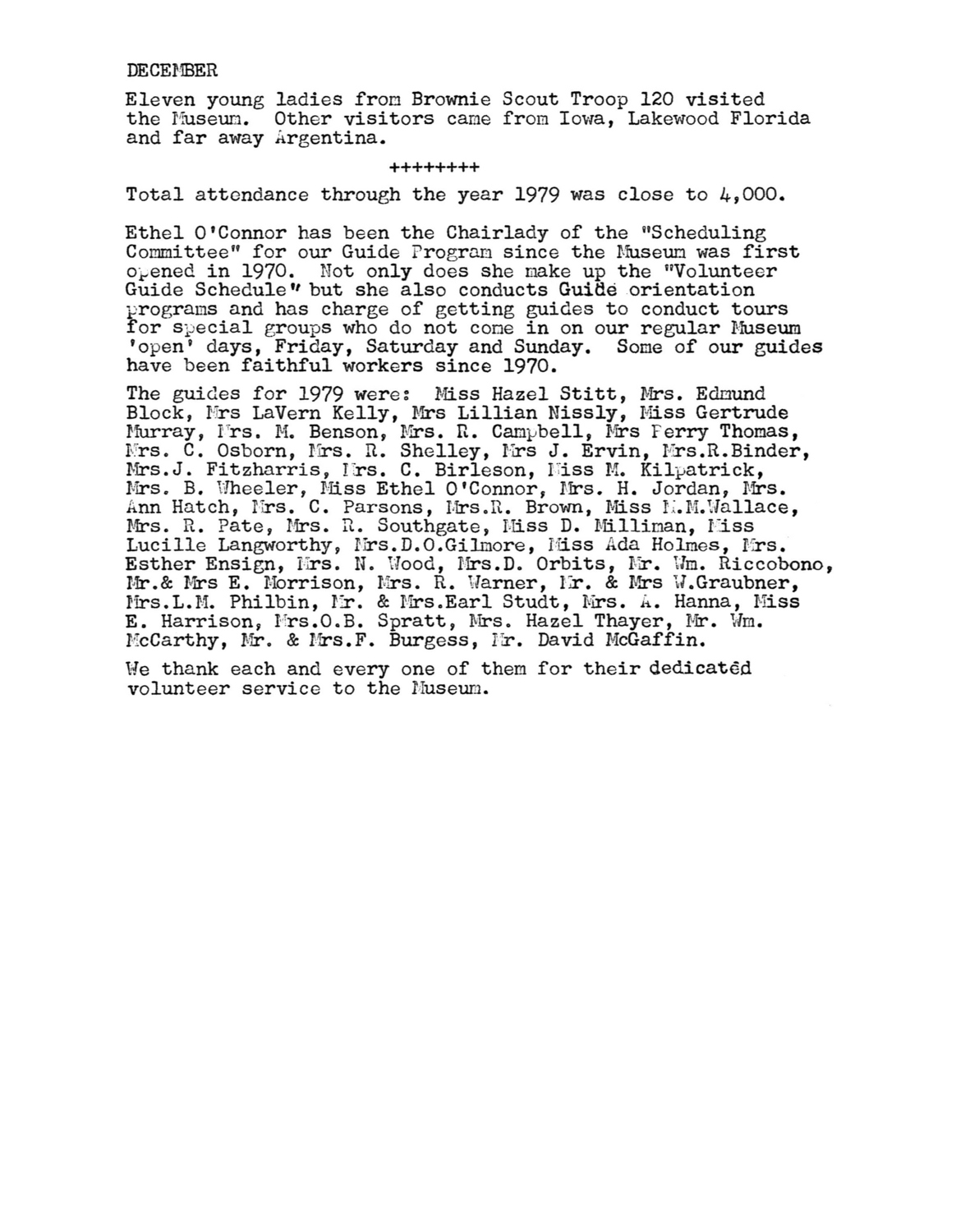 At the Annual Meeting Herbert Cornish and William Riccobono were re re-elected to the Board and Rene Burgess and Stanley Harbison elected as new members. Jim Westfall entertained with his humorous talk of off-beat memories of Ypsilanti. At the organization meeting of the Board Herbert Cornish was elected President and William Riccobono Vice President with Dorothy Disbrow continuing as Secretary and Fred J. Peters as Treasurer.

The Ypsilanti Historical Museum was host to many visitors, some coming from as far away as Caracas Venezuela, Pittsburg Pennsylvania, Boca Raton Florida, Seattle Washington, Fayetteville North Carolina, and of course Ypsilanti and Ann Arbor.

A special display of old fashioned Christmas cards was carried over from December.

It was during this month that we attended the third Annual meeting of the State of Michigan Black Sites organization, followed by a dinner at the Grainery, hosted by General Motors. A.P. Marshall spoke at the dinner on the early history of Blacks in Ypsilanti.

Vans, courtesy of Ford Motor, brought the group to the Museum to see the displays arranged by Nathalie Edmunds and others. An Important and unusual event to be long remembered.

At the General meeting Mrs. Ruth Reynolds spoke on “Victorian Costuming Throughout the Day” using clothing from our collection as display.

Diane Anderson entranced 110 youngsters with her ‘how to make Valentines’. Display cases were full of quaint and antique Valentines from our collection.

There were guests during the month from Windsor Ontario, Moorehead Kentucky, Washington D.C., Lakeland Florida, Leicester England, Lansing, Detroit and other Michigan cities. Also the Ypsilanti Garden Club met at the Museum.

For the General Meeting the “Sweet Adelines” of Ann Arbor entertained with their songs and also led the many guests in a ‘sing &equals; a &equals; long’.

Jane Bind and Esther Ensign demonstrated Easter Egg decorating. Esther does an elaborate panaramic type egg and Jane decorates her eggs with material in a style most unusual.

Frank C. Wilhelm was at our meeting representing the State of Michigan Historical Society, honoring four Ypsilanti places of business which have existed for 100 years or more. Special Citations were given to Atwood McAndrew for Mack and Mack, the Clarence Goodsmans and William Stevens for Mellencamps, the B.P. Koerbers and the Jerry Goodings for the National Bank of Ypsilanti, and Edward Gremban for Peninsular Paper Company.

Norma Cichanski entertained at the Special Events program with her talk on the History of Herbs and cooking with them.

A large group from the Adams School came to learn more about the old 4th Ward School. A class from Eastern interested in Folklore tourned the Museum and a second group to see our quilt and clothing collection. Three adults and twenty-two youngsters from the Fletcher School and fifty-six children, and teachers, from Ardis School visited the Museum.

Annual Society picnic at the rural home of Grace and Herbert Cornish. Marvelous food and a lovely affair.

Thirty students from the Chapelle School were given a special tour of the Museum. Questions were sensible and all seemed very interested in Ypsilanti History. Eighteen children from Mrs. Robert Hunt's First Grade from the Willow Run schools. Don't know just what goes on in a first grader's mind!

Special information was requested and given about the old days of the Railroad Station area, the history of the old City Hall, former residence of D.L. Quirk, and the Ladies' Library building.

The Special exhibit was that of antique ink wells. This fabulous collection was loaned to the Museum by Mrs. James Baker.

Rene Burgess her children and their friends built a “Year of the Child” float for the American Legion July 4th Parade, winning third place in their division. The trophy they won is on display at the Museum.

We were busy preparing for the Ypsilanti Yesterday Festival.

The Special Exhibits were the most interesting collection of antique bottles loaned by Mrs. John Kirkendall and large and beautiful pitchers from Foster Fletcher and minature pitchers loaned by Mrs. Carl Miller, some no larger than a finger nail.

The Ann Arbor Chapter of the Embroiderers Guild came for a meeting and a tour.

Ypsilanti Yesterday Festival-August 24, 25 and 26th—The Museum was delighted to be over-whelmed with visitors, more than 2200 people toured the Museum and Ethel O'Connor, Museum Guide Director, had to call on every available guide

A collection of sea shells and one of model boats were loaned by Mrs. Donald Disbrow, Mr. Phil Wheeler and Mr. and Mrs. Arthur J Howard for the Special Exhibits.

The Special Exhibit, at the Museum over six weeks, was a fascinating display of handmade Indian beadwork made by Mrs. Joyce Tinkham, a member of the Nishga Indian tribe. Each piece of bead work had a card explaining its use and directions for making it.

Thirty members of the University of Michigan Faculty Woman's Antique Group were given a special Museum tour by three special guides, Anne McCarthy, Doris Milliman and Dorothy Disbrow. The group were very generous in contributing to our Donation Cannister and later sent a handsome poinsettia plant to the Museum.

Seventeen members of Girl Scout Troup 432 visited the Museum. There were other visitors from Sedona Arizona, South Bend Indiana, Houghton and other Michigan cities.

This was the month when we had our Annual Dinner. One hundred and fifty-six attended the roast beef dinner at St John's Catholic Church and heard our member Charles Hagler tell all about the moving of the old Ezra Lay house from East Michigan Avenue to its present location and revitalization on Berry Road. A tremendous undertaking, thoroughly documented and illustrated.

The Special Exhibit for October-November was that of the vast collection of lovely laces owned by the Museum. This display was prepared and set-up by Mrs. Ruth Reynolds and Mrs. Mrs. Robert Campbell.

Warren and Mabel Johnson, Port Clinton Ohio, and close friends of our member, Ruth Boughner, spent an interesting time in the Museum and Archives. The Johnsons are very much interested and involved in a new Museum in Port Clinton where they have something we do not have-a lighthouse!

Arthur J Howard brought a handsome tree for Christmas tree “in the parlour” and Deci Howard and members of the Ypsilanti Garden Club made the “Danish” decorations for it. LaVern and Katherine Howard and their Committee, Doris Milliman and Lynda Hohlbrook decorated the rooms.

Arthur J had managed to get our new Museum outside sign installed so that every thing was prepared for a large attendance at our Annual Christmas Party but the weather did not cooperate. Rain changing to sleet prevented many attending-but more than one hundred came and enjoyed the singing of the Junior Choir of the Methodist Church.

The Special Exhibit for December was the beautiful display of antique dolls loaned to us by some of the residence of the Gilbert Residence and arranged by Mrs. Katherine Carstens and her daughter. Mrs. Bancroft Brien generously allowed us to display her charming collection of Bavarian china doll aishes

Ethel O'Connor has been the Chairlady of the “Scheduling Committee” for our Guide Program since the Museum was first opened in 1970. Not only does she make up the “Volunteer Guide Schedule” but she also conducts Guide orientation programs and has charge of getting guides to conduct tours for special groups who do not come in on our regular Museum ‘open’ days, Friday, Saturday and Sunday. Some of our guides have been faithful workers since 1970.

We thank each and every one of them for their dedicated volunteer service to the Museum.