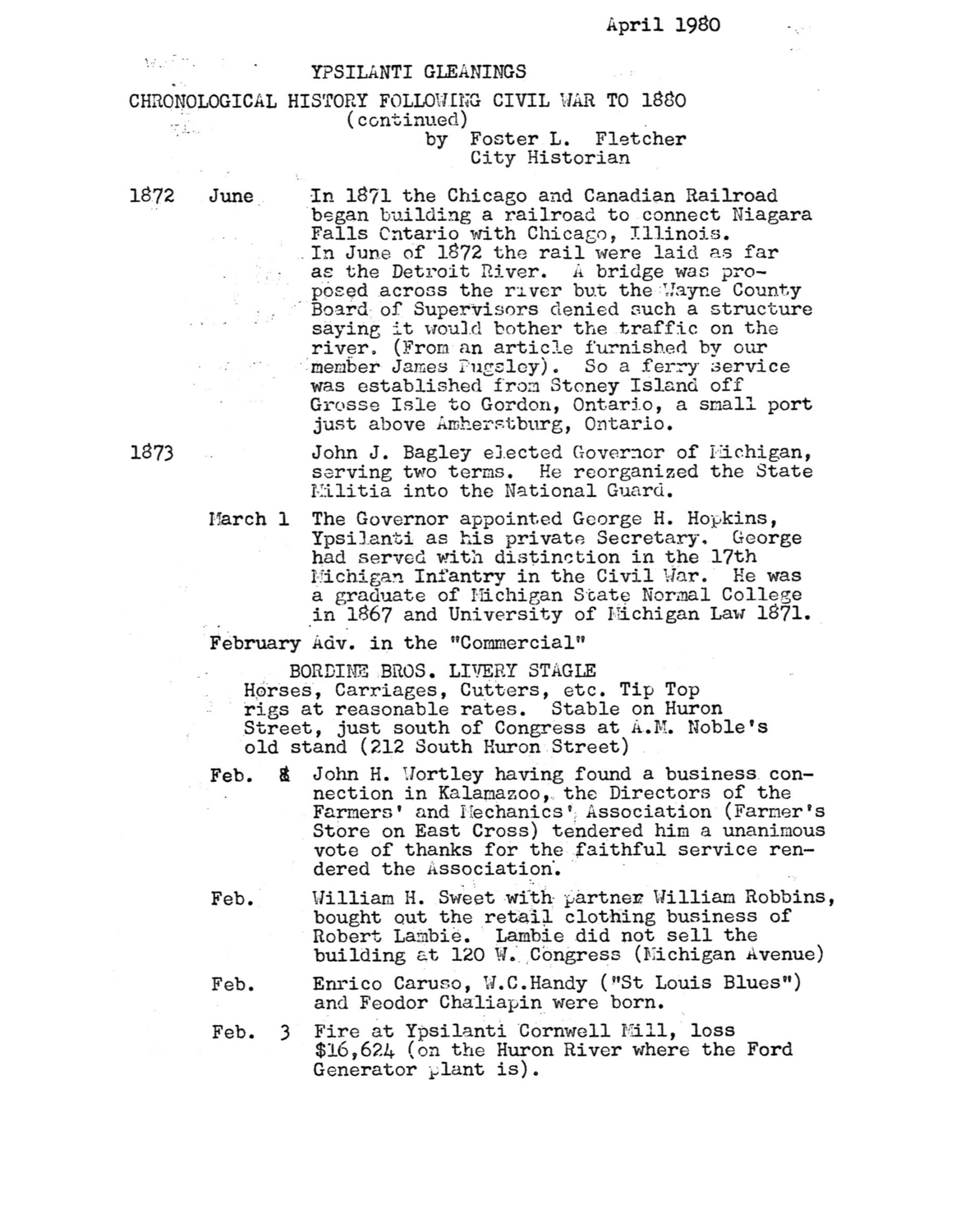 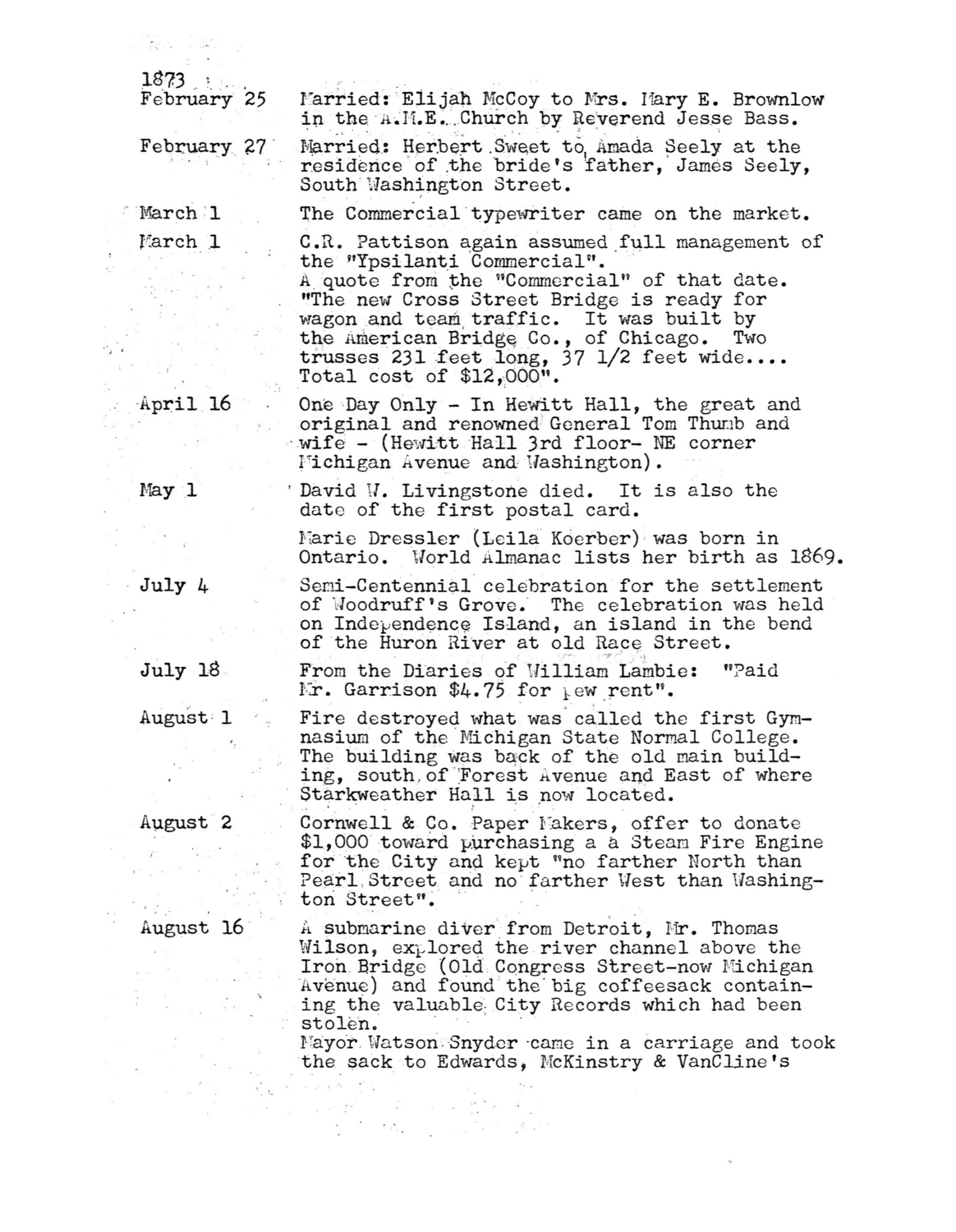 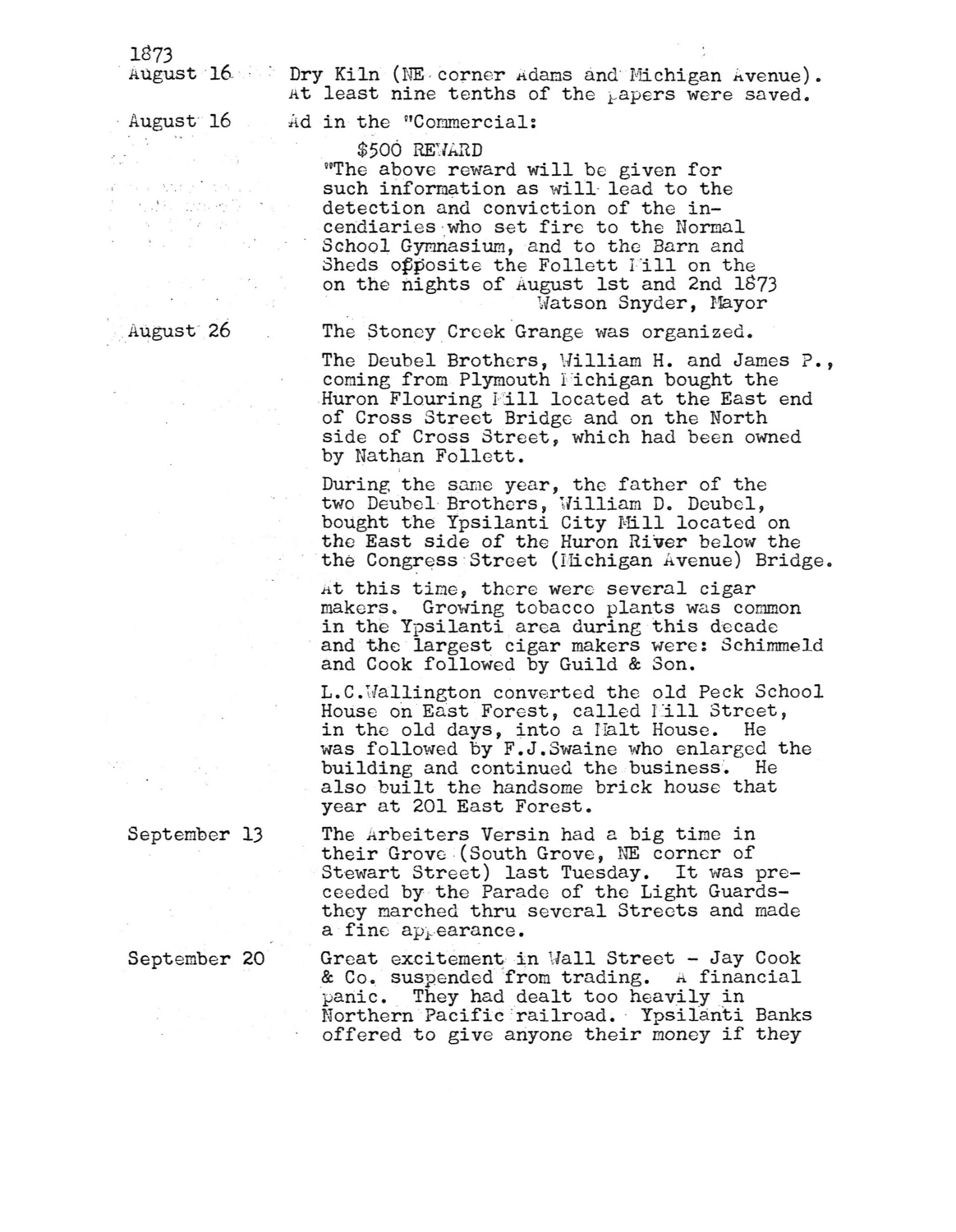 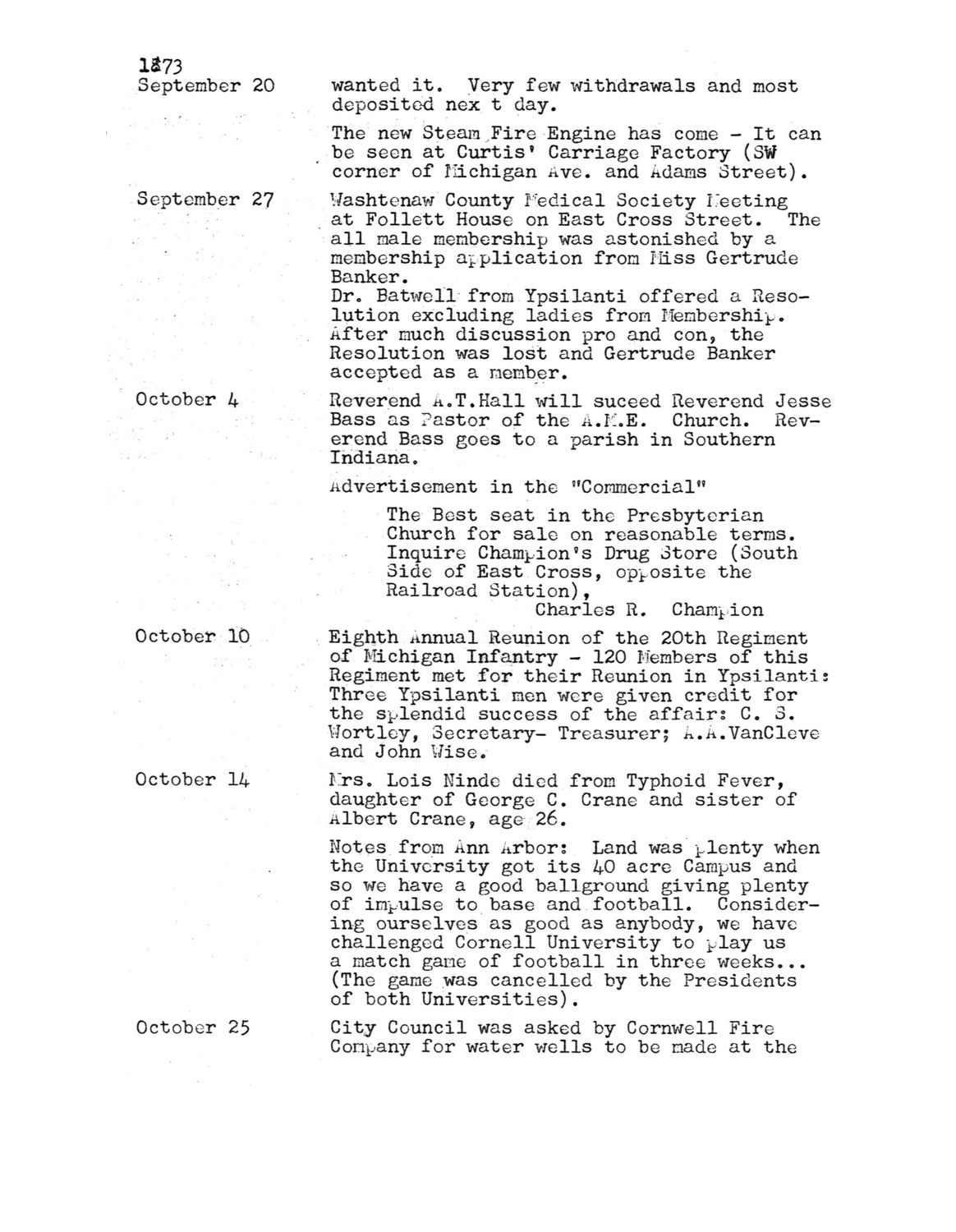 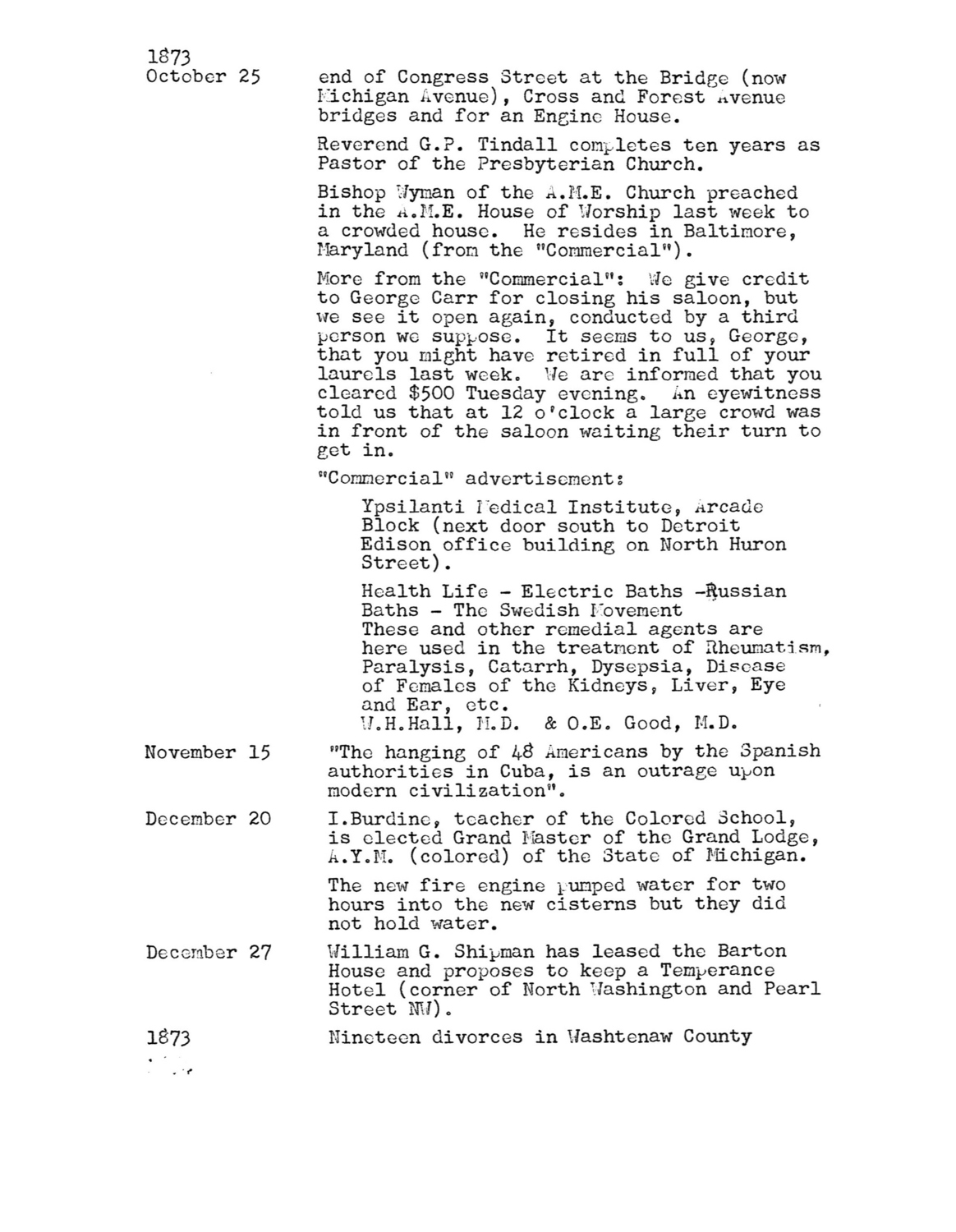 1872
June
In 1871 the Chicago and Canadian Railroad began building a railroad to connect Niagara Falls Ontario with Chicago, Illinois. In June of 1872 the rail were laid as far as the Detroit River. A bridge was proposed across the river but the Wayne County Board of Supervisors denied such a structure saying it would bother the traffic on the river. (From an article furnished by our member James Pugsley). So a ferry service was established from Stoney Island off Grosse Isle to Gordon, Ontario, a small port just above Amherstburg, Ontario.

March 1
The Governor appointed George H. Hopkins, Ypsilanti as his private Secretary. George had served with distinction in the 17th Michigan Infantry in the Civil War. He was a graduate of Michigan State Normal College in 1867 and University of Michigan Law 1871.

Feb.
John H. Wortley having found a business connection in Kalamazoo, the Directors of the Farmers' and Mechanics' Association (Farmer's Store on East Cross) tendered him a unanimous vote of thanks for the faithful service rendered the Association.

Feb. 3
Fire at Ypsilanti Cornwell Mill, loss $16,624 (on the Huron River where the Ford Generator plant is).

March 1
The Commercial typewriter came on the market.

March 1
C.R. Pattison again assumed full management of the Ypsilanti Commercial.
A quote from the Commercial of that date. “The new Cross Street Bridge is ready for wagon and team traffic. It was built by the American Bridge Co., of Chicago. Two trusses 231 feet long, 37 1/2 feet wide… . Total cost of $12,000”.

May 1
David W. Livingstone died. It is also the date of the first postal card.
Marie Dressler (Leila Koerber) was born in Ontario. World Almanac lists her birth as 1869.

July 4
Semi-Centennial celebration for the Settlement of Woodruff's Grove. The celebration was held on Independence Island, an island in the bend of the Huron River at old Race Street.

August 1
Fire destroyed what was called the first Gymnasium of the Michigan State Normal College. The building was back of the old main building, south of Forest Avenue and East of where Starkweather Hall is now located.

August 2
Cornwell & Co. Paper Makers, offer to donate $1,000 toward purchasing a a Steam Fire Engine for the City and kept “no farther North than Pearl Street and no farther West than Washington Street”.

August 16
A submarine diver from Detroit, Mr. Thomas Wilson, explored the river channel above the Iron Bridge (Old Congress Street-now Michigan Avenue) and found the big coffeesack containing the valuable City Records which had been stolen.
Mayor Watson Snyder came in a carriage and took the sack to Edwards, McKinstry & VanCline's Dry Kiln (NE corner Adams and Michigan Avenue). At least nine tenths of the papers were saved.

August 16
Ad in the Commercial:
$500 Reward
The above reward will be given for such information as will lead to the detection and conviction of the incendiaries who set fire to the Normal School Gymnasium, and to the Barn and Sheds opposite the Follett Mill on the on the nights of August 1st and 2nd 1873
Watson Snyder, Mayor

The Deubel Brothers, William H. and James P., coming from Plymouth Michigan bought the Huron Flouring Mill located at the East end of Cross Street Bridge and on the North side of Cross Street, which had been owned by Nathan Follett.

During the same year, the father of the two Deubel Brothers, William D. Deubel, bought the Ypsilanti City Mill located on the East Side of the Huron River below the the Congress Street (Michigan Avenue) Bridge.

At this time, there were several cigar makers. Growing tobacco plants was common in the Ypsilanti area during this decade and the largest cigar makers were: Schimmeld and Cook followed by Guild & Son.

L.C. Wallington converted the old Peck School House on East Forest, called Mill Street, in the old days, into a Malt House. He was followed by F.J.Swaine who enlarged the building and continued the business. He also built the handsome brick house that year at 201 East Forest.

September 13
The Arbeiters Versin had a big time in their Grove (South Grove, NE corner of Stewart Street) last Tuesday. It was preceeded by the Parade of the Light Guards-they marched thru several Streets and made a fine appearance.

September 20
Great excitement in Wall Street-Jay Cook & Co. suspended from trading. A financial panic. They had dealt too heavily in Northern Pacific railroad. Ypsilanti Banks offered to give anyone their money if they wanted it. Very few withdrawals and most deposited next day.

The new Steam Fire Engine has come-It can be seen at Curtis' Carriage Factory (SW corner of Michigan Ave. and Adams Street).

Dr. Batwell from Ypsilanti offered a Resolution excluding ladies from Membership. After much discussion pro and con, the Resolution was lost and Gertrude Banker accepted as a member.

October 4
Reverend A.T.Hall will suceed Reverend Jesse Bass as Pastor of the A.M.E. Church. Reverend Bass goes to a parish in Southern Indiana.

Advertisement in the Commercial:
The Best seat in the Presbyterian Church for sale on reasonable terms. Inquire Champion's Drug Store (South Side of East Cross, opposite the Railroad Station),
Charles R. Champion

October 10
Eighth Annual Reunion of the 20th Regiment of Michigan Infantry-120 Members of this Regiment met for their Reunion in Ypsilanti: Three Ypsilanti men were given credit for the splendid success of the affair: C. S. Wortley, Secretary-Treasurer; A.A. VanCleve and John Wise.

October 14
Mrs. Lois Ninde died from Typhoid Fever, daughter of George C. Crane and sister of Albert Crane, age 26.
Notes from Ann Arbor: Land was plenty when the University got its 40 acre Campus and so we have a good ballground giving plenty of impulse to base and football. Considering ourselves as good as anybody, we have challenged Cornell University to play us a match game of football in three weeks… (The game was cancelled by the Presidents of both Universities).

October 25
City Council was asked by Cornwell Fire Company for water wells to be made at the end of Congress Street at the Bridge (now Michigan Avenue), Cross and Forest Avenue bridges and for an Engine House.
Reverend G.P. Tindall completes ten years as Pastor of the Presbyterian Church.
Bishop Wyman of the A.M.E. Church preached in the A.M.E. House of Worship last week to a crowded house. He resides in Baltimore, Maryland (from the Commercial).
More from the Commercial: We give credit to George Carr for closing his saloon, but we see it open again, conducted by a third person we suppose. It seems to us, George, that you might have retired in full of your laurels last week. We are informed that you cleared &dollar;500 Tuesday evening. An eyewitness told us that at 12 o'clock a large crowd was in front of the saloon waiting their turn to get in.
Commercial advertisement:
Ypsilanti Medical Institute, Arcade Block (next door south to Detroit Edison office building on North Huron Street).
Health Life-Electric Baths-Russian Baths-The Swedish Movement These and other remedial agents are here used in the treatment of Rheumatism, Paralysis, Catarrh, Dysepsia, Disease of Females of the Kidneys, Liver, Eye and Ear, etc.
W.H. Hall, M.D. & O.E. Good, M.D.

November 15
“The hanging of 48 Americans by the Spanish authorities in Cuba, is an outrage upon modern civilization”.

December 20
I. Burdine, teacher of the Colored School, is elected Grand Master of the Grand Lodge, A.Y.M. (colored) of the State of Michigan.

The new fire engine pumped water for two hours into the new cisterns but they did not hold water.