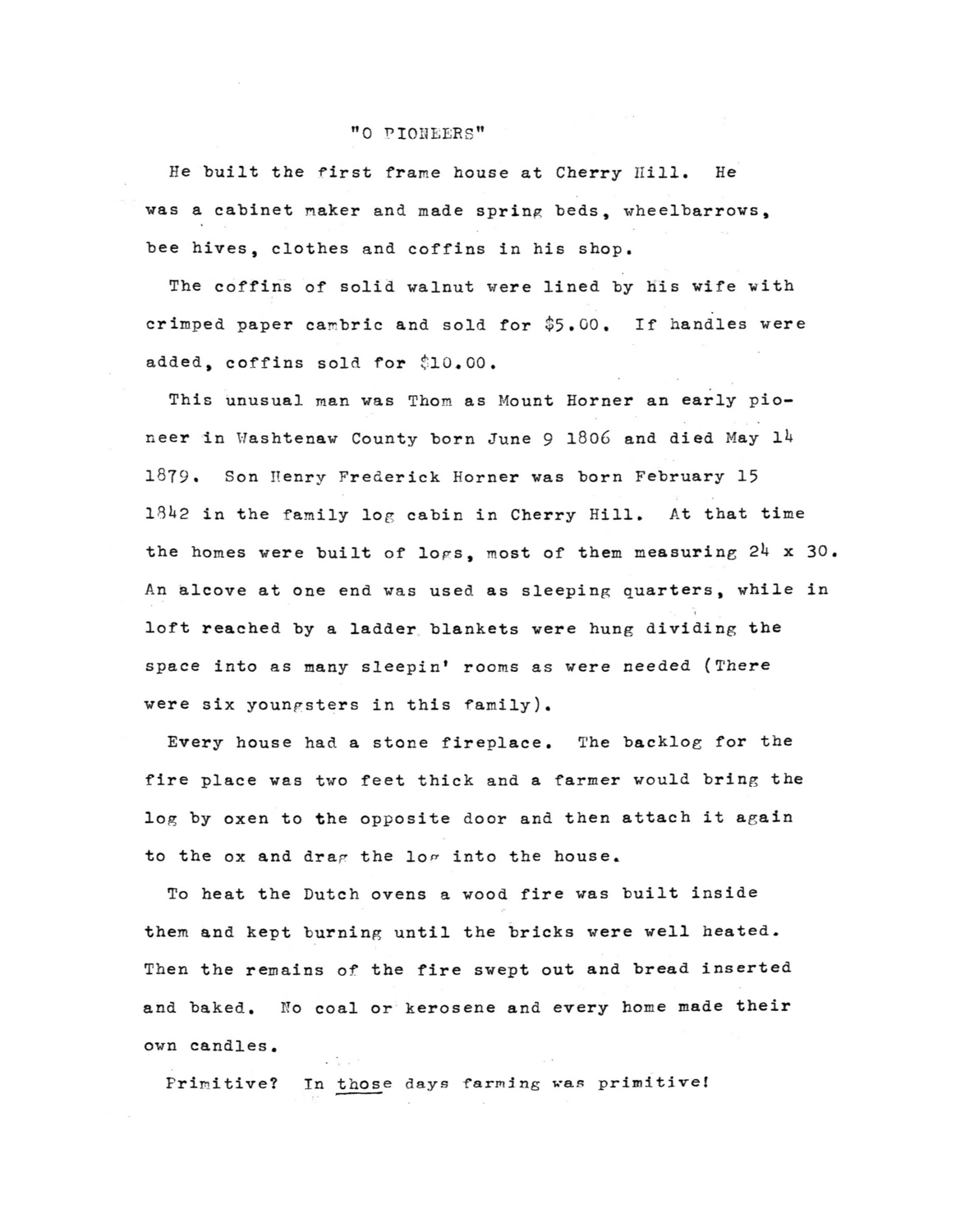 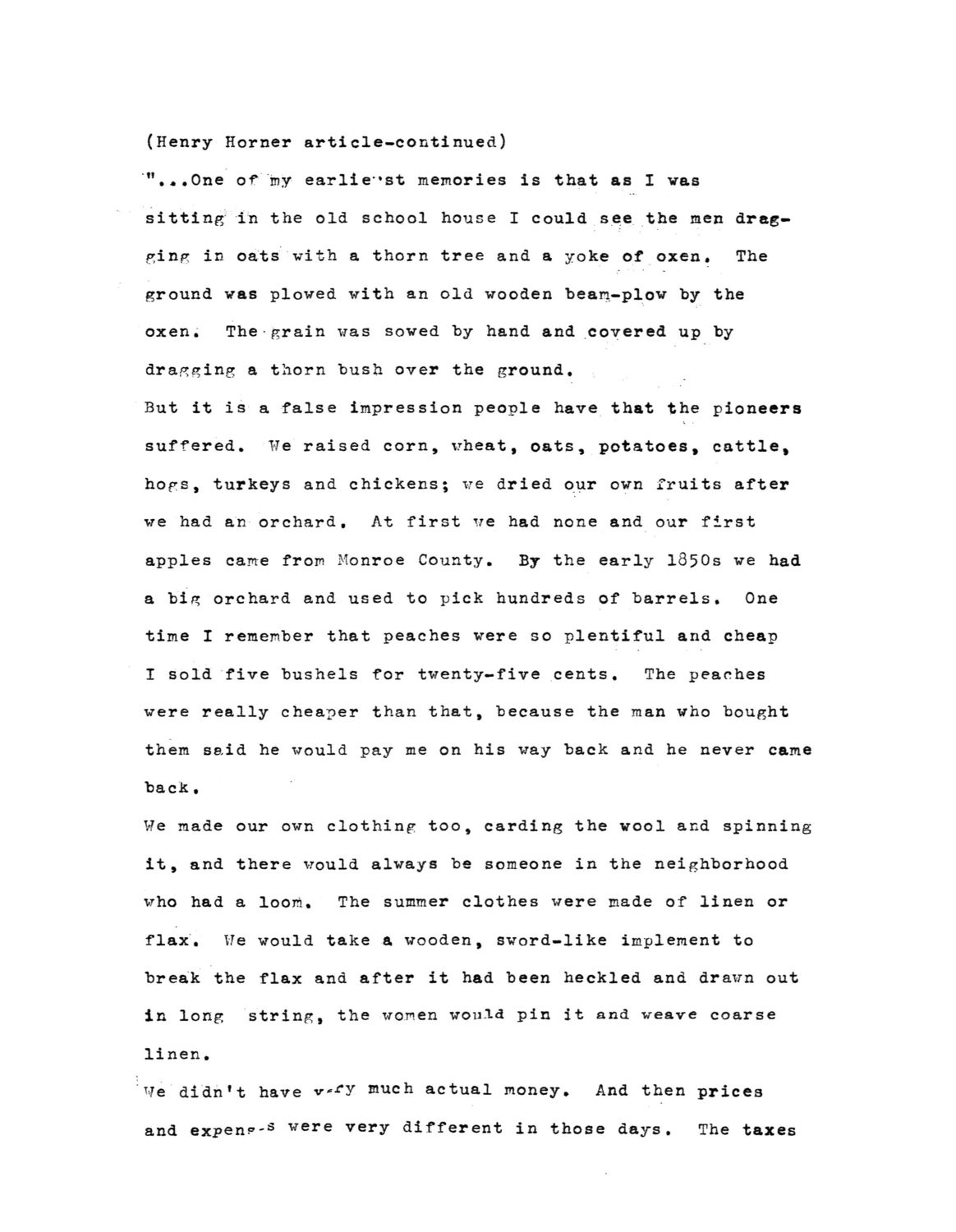 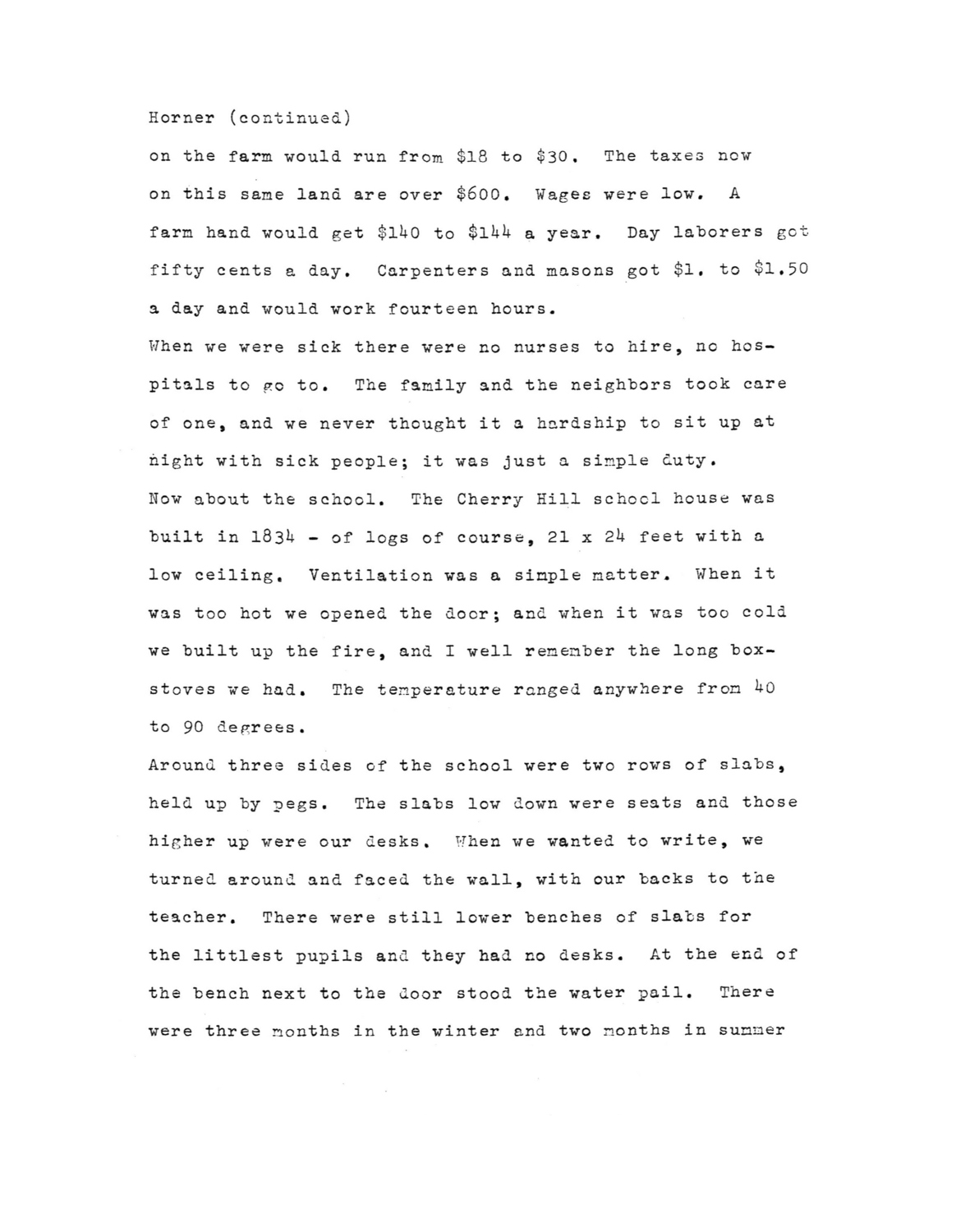 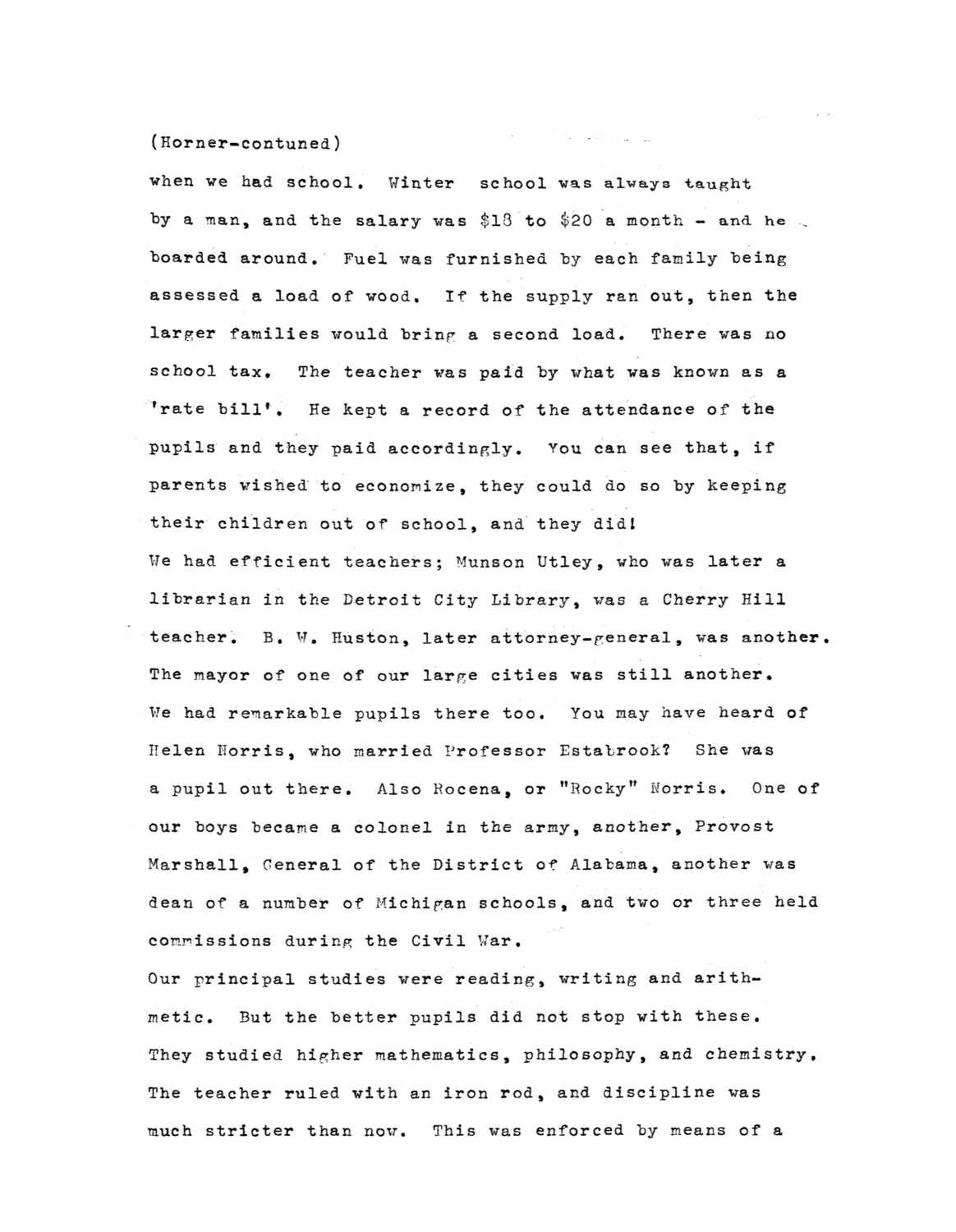 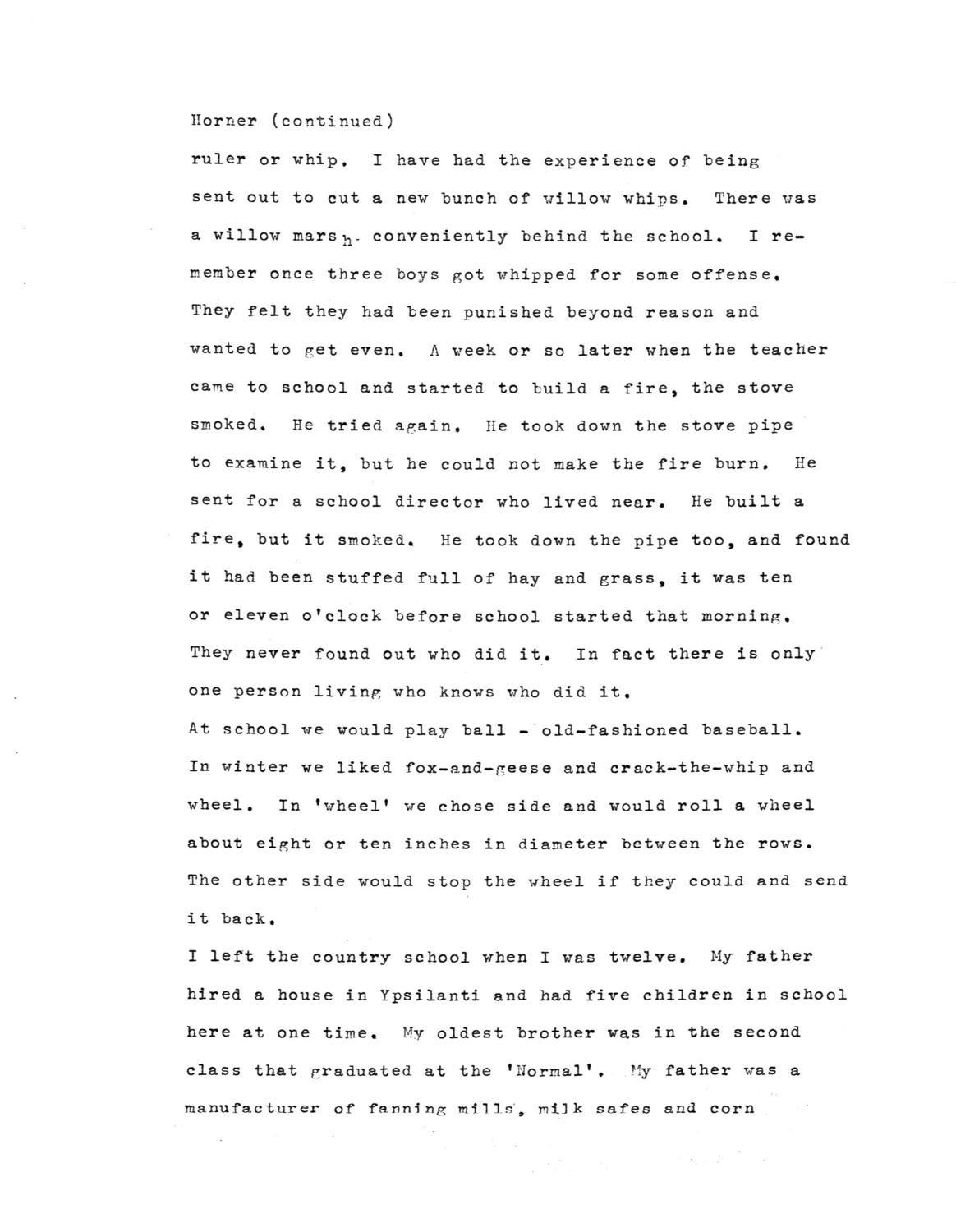 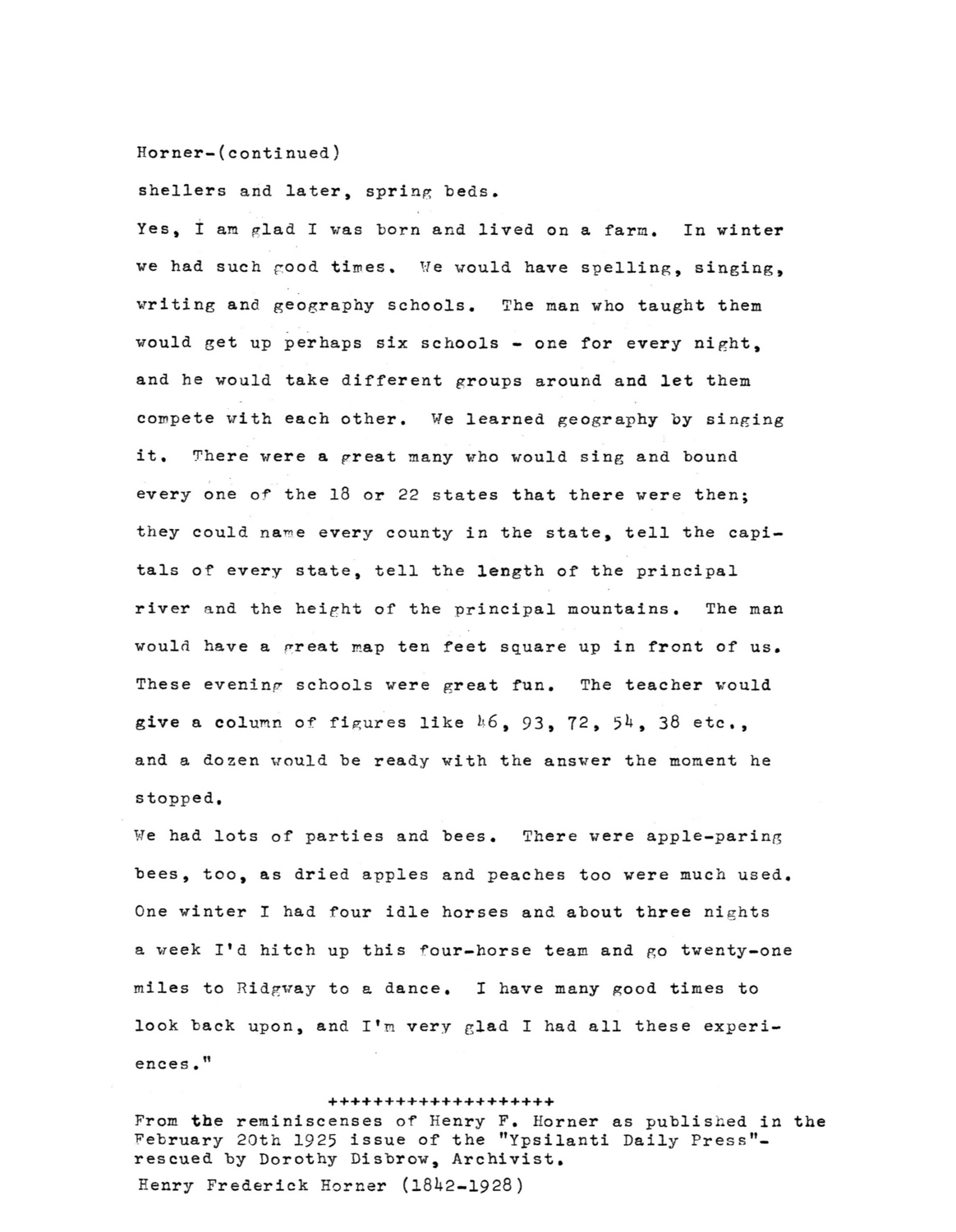 From the reminiscenses of Henry F. Horner as published in the February 20th 1925 issue of the “Ypsilanti Daily Press”-rescued by Dorothy Disbrow, Archivist.

He built the first frame house at Cherry Hill. He was a cabinet maker and made spring beds, wheelbarrows, bee hives, clothes and coffins in his shop.

The coffins of solid walnut were lined by his wife with crimped paper cambric and sold for $5.00. If handles were added, coffins sold for $10.00.

This unusual man was Thom as Mount Horner an early pioneer in Washtenaw County born June 9 1806 and died May 14 1879. Son Henry Frederick Horner was born February 15 1842 in the family log cabin in Cherry Hill. At that time the homes were built of logs, most of them measuring 24 × 30. An alcove at one end was used as sleeping quarters, while in loft reached by a ladder blankets were hung dividing the space into as many sleepin' rooms as were needed (There were six youngsters in this family).

Every house had a stone fireplace. The backlog for the fire place was two feet thick and a farmer would bring the log by oxen to the opposite door and then attach it again to the ox and drag the log into the house.

To heat the Dutch ovens a wood fire was built inside them and kept burning until the bricks were well heated. Then the remains of the fire swept out and bread inserted and baked. No coal or kerosene and every home made their own candles.

Primitive? In those days farming was primitivel (Henry Horner article-continued)

“…One of my earliest memories is that as I was sitting in the old school house I could see the men drag-ging in oats with a thorn tree and a yoke of oxen. The ground was plowed with an old wooden beam-plow by the oxen. The grain was sowed by hand and covered up by dragging a thorn bush over the ground.

But it is a false impression people have that the pioneers suffered. We raised corn, wheat, oats, potatoes, cattle, hogs, turkeys and chickens; we dried our own fruits after we had an orchard. At first we had none and our first apples came from Monroe County. By the early 1850s we had a big orchard and used to pick hundreds of barrels. One time I remember that peaches were so plentiful and cheap I sold five bushels for twenty-five cents. The peaches were really cheaper than that, because the man who bought them said he would pay me on his way back and he never came back.

We made our own clothing too, carding the wool and spinning it, and there would always be someone in the neighborhood who had a loom. The summer clothes were made of linen or flax. We would take a wooden, sword-like implement to break the flax and after it had been heckled and drawn out in long string, the women would pin it and weave coarse linen.

We didn't have very much actual money. And then prices and expenses were very different in those days. The taxes on the farm would run from $18 to $30. The taxes now on this same land are over $600. Wages were low. A farm hand would get $140 to $144 a year. Day laborers got fifty cents a day. Carpenters and masons got $1. to $1.50 a day and would work fourteen hours.

When we were sick there were no nurses to hire, no hos-pitals to go to. The family and the neighbors took care of one, and we never thought it a hardship to sit up at night with sick people; it was just a simple duty. Now about the school. The Cherry Hill school house was built in 1834-of logs of course, 21 x 24 feet with a low ceiling. Ventilation was a simple matter. When it was too hot we opened the door; and when it was too cold we built up the fire, and I well remember the long box-stoves we had. The temperature ranged anywhere from 40 to 90 degrees.

Around three sides of the school were two rows of slabs, held up by pegs. The slabs low down were seats and those higher up were our desks. When we wanted to write, we turned around and faced the wall, with our backs to the teacher. There were still lower benches of slabs for the littlest pupils and they had no desks. At the end of the bench next to the door stood the water pail. There were three months in the winter and two months in summer when we had school. Winter school was always taught by a man, and the salary was $18 to $20 a month-and he boarded around. Fuel was furnished by each family being assessed a load of wood. If the supply ran out, then the larger families would bring a second load. There was no school tax. The teacher was paid by what was known as a ‘rate bill’. He kept a record of the attendance of the pupils and they paid accordingly. You can see that, if parents wished to economize, they could do so by keeping their children out of school, and they did:

We had efficient teachers; Munson Utley, who was later a librarian in the Detroit City Library, was a Cherry Hill teacher. B. W. Huston, later attorney-general, was another. The mayor of one of our large cities was still another. We had remarkable pupils there too. You may have heard of Helen Norris, who married Professor Estabrook? She was a pupil out there. Also Rocena, or “Rocky” Norris. One of our boys became a colonel in the army, another, Provost Marshall, General of the District of Alabama, another was dean of a number of Michigan schools, and two or three held commissions during the Civil War.

Our principal studies were reading, writing and arith-metic. But the better pupils did not stop with these. They studied higher mathematics, philosophy, and chemistry. The teacher ruled with an iron rod, and discipline was much stricter than now. This was enforced by means of a ruler or whip. I have had the experience of being sent out to cut a new bunch of willow whips. There was a willow marsh conveniently behind the school. I re-member once three boys got whipped for some offense. They felt they had been punished beyond reason and wanted to get even. A week or so later when the teacher came to school and started to build a fire, the stove smoked. He tried again. He took down the stove pipe to examine it, but he could not make the fire burn. He sent for a school director who lived near. He built a fire, but it smoked. He took down the pipe too, and found it had been stuffed full of hay and grass, it was ten or eleven o'clock before school started that morning. They never found out who did it. In fact there is only one person living who knows who did it.

At school we would play ball-old-fashioned baseball. In winter we liked fox-and-geese and crack-the-whip and wheel. In ‘wheel’ we chose side and would roll a wheel about eight or ten inches in diameter between the rows. The other side would stop the wheel if they could and send it back.

I left the country school when I was twelve. My father hired a house in Ypsilanti and had five children in school here at one time. My oldest brother was in the second class that graduated at the ‘Normal’. My father was a manufacturer of fanning mills, milk safes and corn shellers and later, spring beds.

Yes, I am glad I was born and lived on a farm. In winter we had such good times. We would have spelling, singing, writing and geography schools. The man who taught them would get up perhaps six schools-one for every night, and he would take different groups around and let them compete with each other. We learned geography by singing it. There were a great many who would sing and bound every one of the 18 or 22 states that there were then; they could name every county in the state, tell the capi-tals of every state, tell the length of the principal river and the height of the principal mountains. The man would have a great map ten feet square up in front of us. These evening schools were great fun. The teacher would give a column of figures like 46, 93, 72, 54, 38 etc., and a dozen would be ready with the answer the moment he stopped.

We had lots of parties and bees. There were apple-paring bees, too, as dried apples and peaches too were much used. One winter I had four idle horses and about three nights a week I'd hitch up this four-horse team and go twenty-one miles to Ridgway to a dance. I have many good times to look back upon, and I'm very glad I had all these experi-ences.”

From the reminiscenses of Henry F. Horner as published in the February 20th 1925 issue of the “Ypsilanti Daily Press”-rescued by Dorothy Disbrow, Archivist.