My Life in Ypsilanti 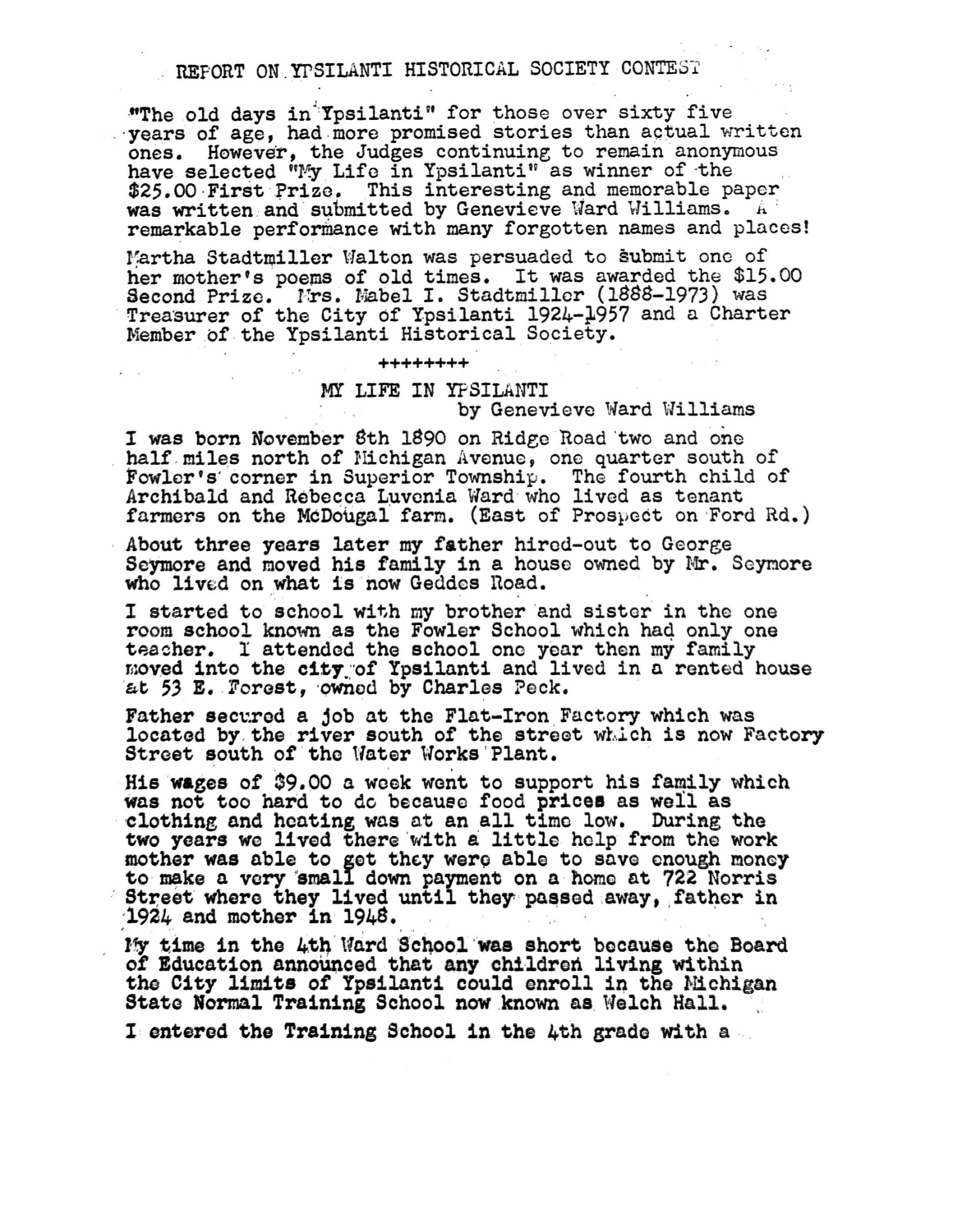 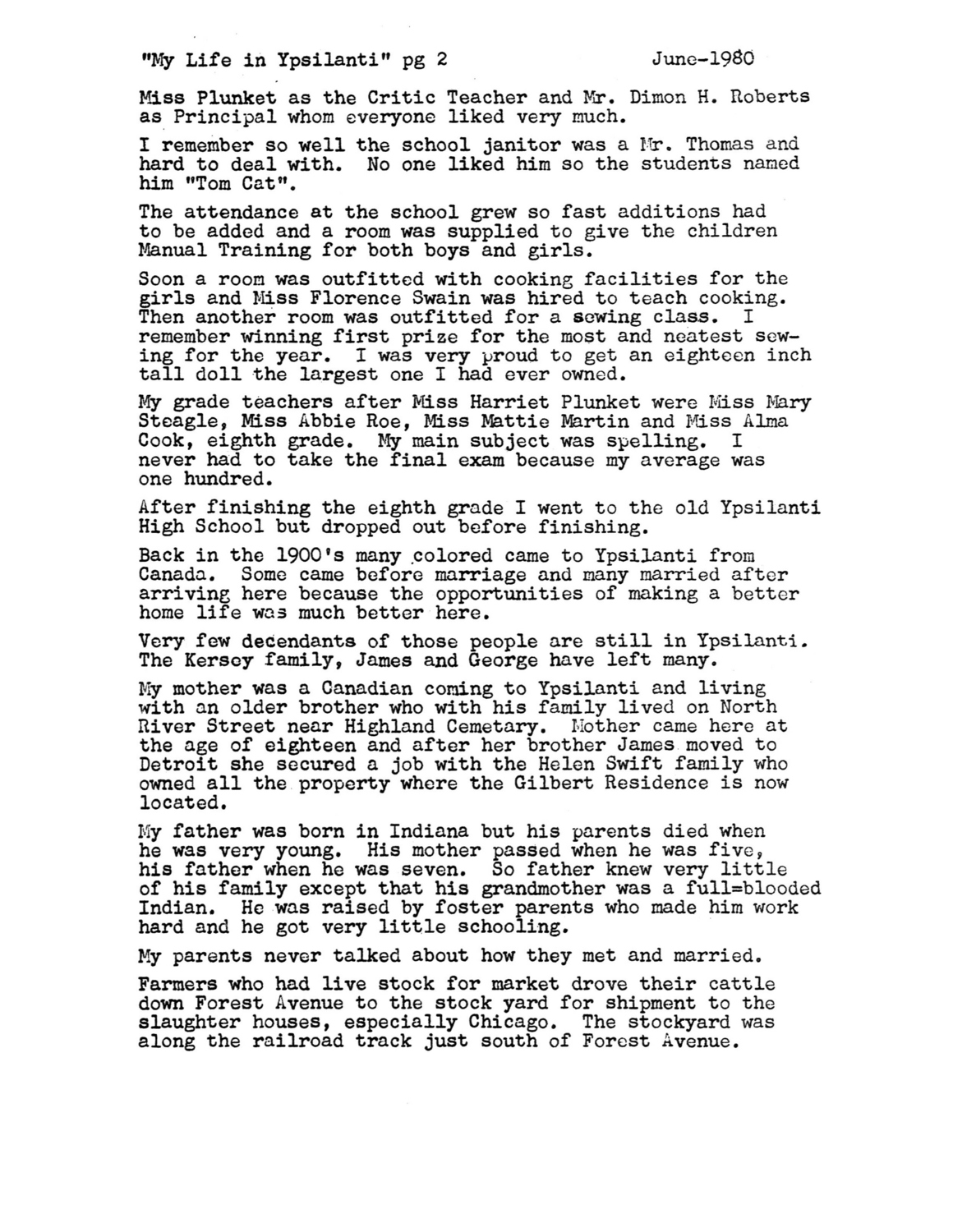 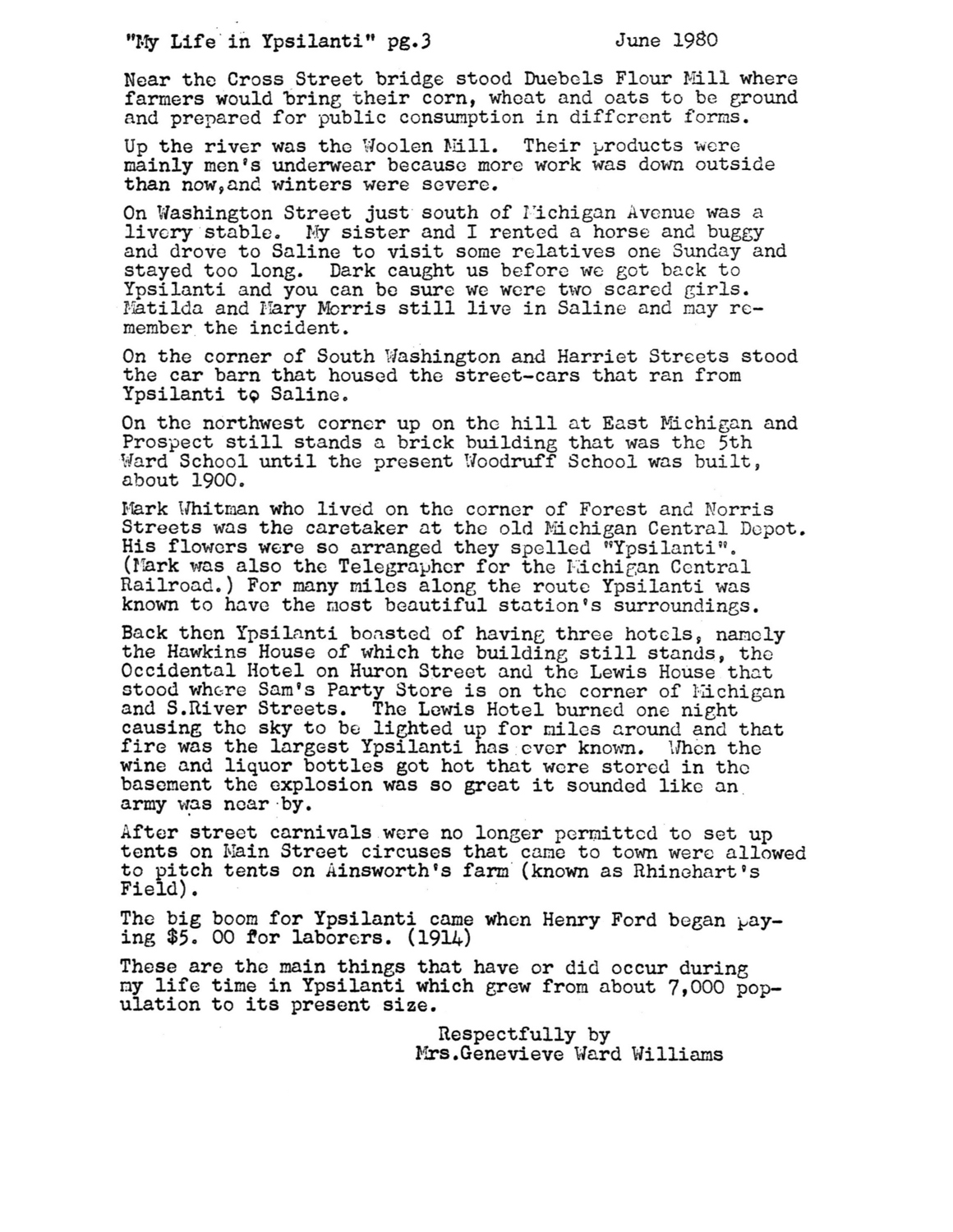 I was born November 8th 1890 on Ridge Road two and one half miles north of Michigan Avenue, one quarter south of Fowler's corner in Superior Township. The fourth child of Archibald and Rebecca Luvenia Ward who lived as tenant farmers on the McDougal farm. (East of Prospect on Ford Rd.)

About three years later my father hired-out to George Seymore and moved his family in a house owned by Mr. Seymore who lived on what is now Geddes Road.

I started to school with my brother and sister in the one room school known as the Fowler School which had only one teacher. I attended the school one year then my family moved into the city of Ypsilanti and lived in a rented house at 53 E. Forest, owned by Charles Peck.

Father secured a job at the Flat-Iron Factory which was located by the river south of the street which is now Factory Street south of the Water Works Plant.

His wages of &dollar;9.00 a week went to support his family which was not too hard to do because food prices as well as clothing and heating was at an all time low. During the two years we lived there with a little help from the work mother was able to get they were able to save enough money to make a very small down payment on a home at 722 Norris Street where they lived until they passed away, father in 1924 and mother in 1948.

My time in the 4th Ward School was short because the Board of Education announced that any children living within the City limits of Ypsilanti could enroll in the Michigan State Normal Training School now known as Welch Hall.

I entered the Training School in the 4th grade with a Miss Plunket as the Critic Teacher and Mr. Dimon H. Roberts as Principal whom everyone liked very much.

I remember so well the school janitor was a Mr. Thomas and hard to deal with. No one liked him so the students named him “Tom Cat”.

The attendance at the school grew so fast additions had to be added and a room was supplied to give the children Manual Training for both boys and girls.

Soon a room was outfitted with cooking facilities for the girls and Miss Florence Swain was hired to teach cooking. Then another room was outfitted for a sewing class. I remember winning first prize for the most and neatest sewing for the year. I was very proud to get an eighteen inch tall doll the largest one I had ever Owned.

My grade teachers after Miss Harriet Plunket were Miss Mary Steagle, Miss Abbie Roe, Miss Mattie Martin and Miss Alma Cook, eighth grade. My main subject was spelling. I never had to take the final exam because my average was one hundred.

After finishing the eighth grade I went to the old Ypsilanti High School but dropped out before finishing.

Back in the 1900's many colored came to Ypsilanti from Canada. Some came before marriage and many married after arriving here because the opportunities of making a better home life was much better here.

Very few decendants of those people are still in Ypsilanti. The Kersey family, James and George have left many.

My mother was a Canadian coming to Ypsilanti and living with an older brother who with his family lived on North River Street near Highland Cemetary. Mother came here at the age of eighteen and after her brother James moved to Detroit she secured a job with the Helen Swift family who owned all the property where the Gilbert Residence is now located.

My father was born in Indiana but his parents died when he was very young. His mother passed when he was five, his father when he was seven. So father knew very little of his family except that his grandmother was a full &equals; blooded Indian. He was raised by foster parents who made him work hard and he got very little schooling.

My parents never talked about how they met and married.

Farmers who had live stock for market drove their cattle down Forest Avenue to the stock yard for shipment to the slaughter houses, especially Chicago. The stockyard was along the railroad track just south of Forest Avenue.

Near the Cross Street bridge stood Duebels Flour Mill where farmers would bring their corn, wheat and oats to be ground and prepared for public consumption in different forms.

Up the river was the Woolen Mill. Their products were mainly men's underwear because more work was down outside than now, and winters were severe.

On Washington Street just south of Michigan Avenue was a livery stable. My sister and I rented a horse and buggy and drove to Saline to visit some relatives one Sunday and stayed too long. Dark caught us before we got back to Ypsilanti and you can be sure we were two scared girls. Matilda and Mary Morris still live in Saline and may remember the incident.
On the corner of South Washington and Harriet Streets stood the car barn that housed the street-cars that ran from Ypsilanti to Saline.

On the northwest corner up on the hill at East Michigan and Prospect still stands a brick building that was the 5th Ward School until the present Woodruff School was built, about 1900.

Mark Whitman who lived on the corner of Forest and Norris Streets was the caretaker at the old Michigan Central Depot. His flowers were so arranged they spelled “Ypsilanti”. (Mark was also the Telegrapher for the Michigan Central Railroad.) For many miles along the route Ypsilanti was known to have the most beautiful station's surroundings.

Back then Ypsilanti boasted of having three hotels, namely the Hawkins House of which the building still stands, the Occidental Hotel on Huron Street and the Lewis House that stood where Sam's Party Store is on the corner of Michigan and S. River Streets. The Lewis Hotel burned one night causing the sky to be lighted up for miles around and that fire was the largest Ypsilanti has over known. When the wine and liquor bottles got hot that were stored in the basement the explosion was so great it sounded like an army was near by.

After street carnivals were no longer permitted to set up tents on Main Street circuses that came to town were allowed to pitch tents on Ainsworth's farm (known as Rhinehart's Field).

The big boom for Ypsilanti came when Henry Ford began paying $5.00 for laborers. (1914)

These are the main things that have or did occur during my life time in Ypsilanti which grew from about 7,000 population to its present size.