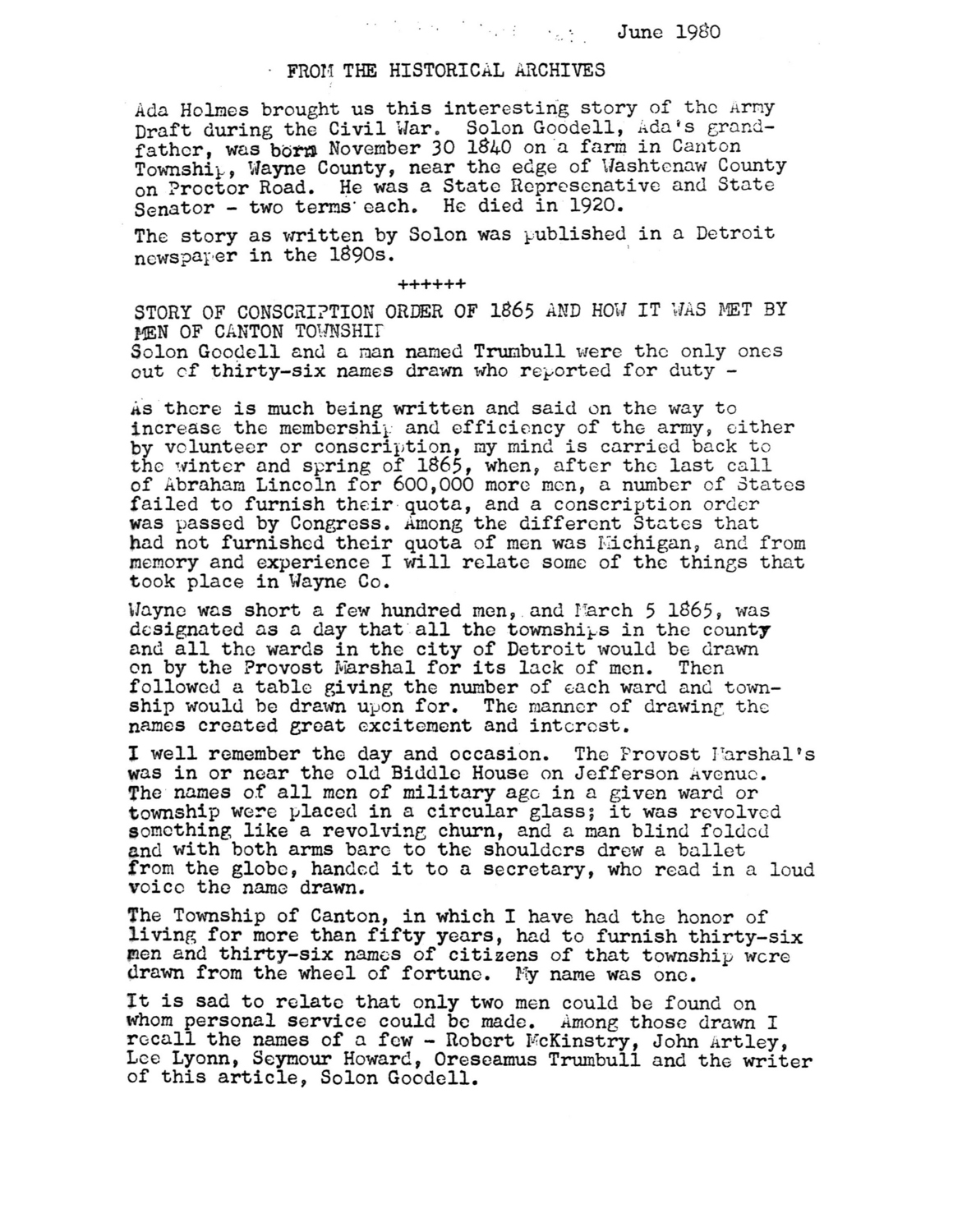 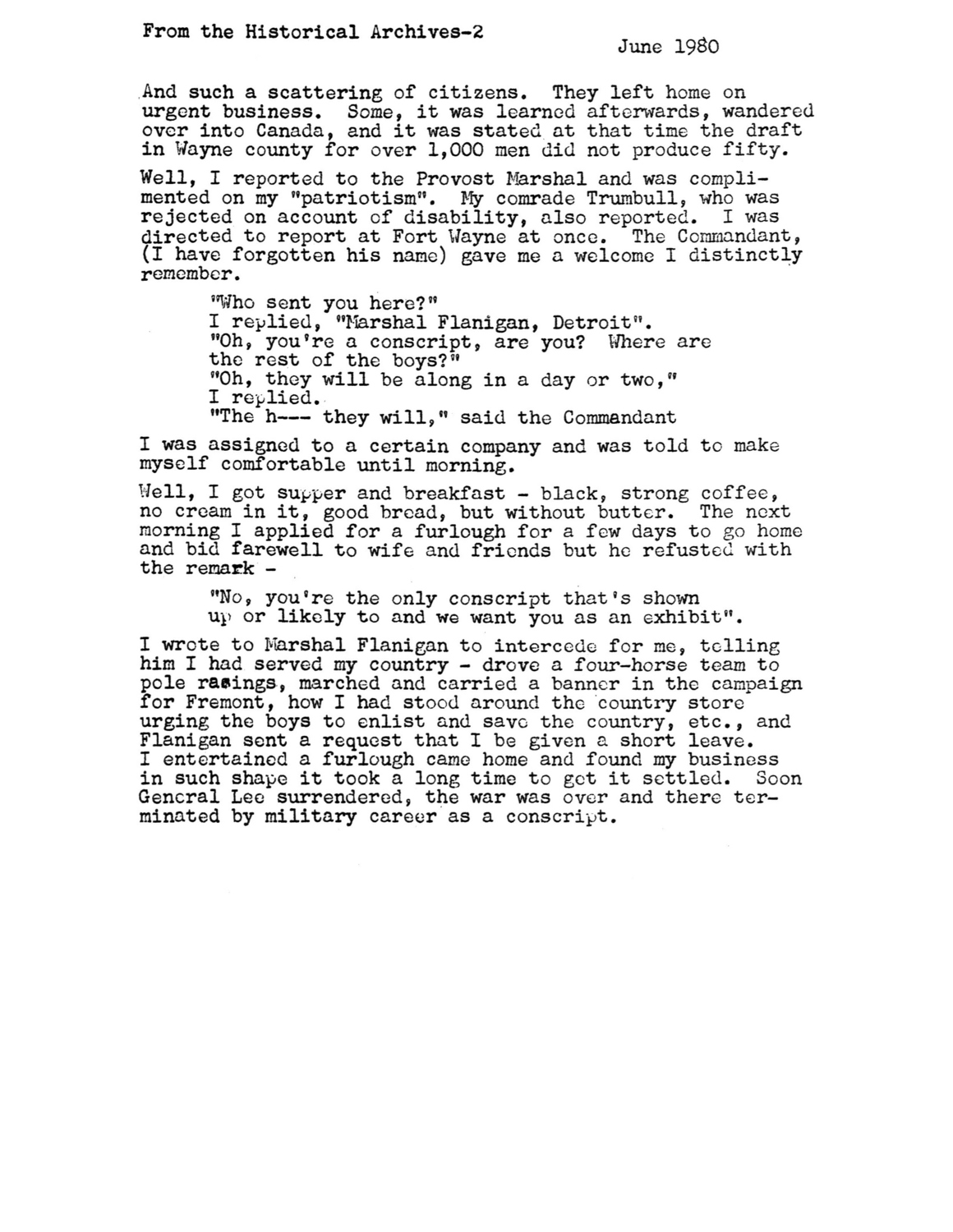 Ada Holmes brought us this interesting story of the Army Draft during the Civil War. Solon Goodell, Ada's grandfather, was born November 30 1840 on a farm in Canton Township, Wayne County, near the edge of Washtenaw County on Proctor Road. He was a State Represenative and State Senator-two terms each. He died in 1920.

The story as written by Solon was published in a Detroit newspaper in the 1890s.

As there is much being written and said on the way to increase the membership and efficiency of the army, either by volunteer or conscription, my mind is carried back to the winter and spring of 1865, when, after the last call of Abraham Lincoln for 600,000 more men, a number of States failed to furnish their quota, and a conscription order was passed by Congress. Among the different States that had not furnished their quota of men was Michigan, and from memory and experience I will relate some of the things that took place in Wayne Co.

Wayne was short a few hundred men, and March 5 1865, was designated as a day that all the townships in the county and all the wards in the city of Detroit would be drawn on by the Provost Marshal for its lack of men. Then followed a table giving the number of each ward and township would be drawn upon for. The manner of drawing the names created great excitement and interest.

I well remember the day and occasion. The Provost Marshal's was in or near the old Biddle House on Jefferson Avenue. The names of all men of military age in a given ward or township were placed in a circular glass; it was revolved something like a revolving churn, and a man blind folded and with both arms bare to the shoulders drew a ballet from the globe, handed it to a secretary, who read in a loud voice the name drawn.

The Township of Canton, in which I have had the honor of living for more than fifty years, had to furnish thirty-six men and thirty-six names of citizens of that township were drawn from the wheel of fortune. My name was one.

It is sad to relate that only two men could be found on whom personal service could be made. Among those drawn I recall the names of a few-Robert McKinstry, John Artley, Lee Lyonn, Seymour Howard, Oreseamus Trumbull and the writer of this article, Solon Goodell.

And such a scattering of citizens. They left home on urgent business. Some, it was learned afterwards, wandered over into Canada, and it was stated at that time the draft in Wayne county for over 1,000 men did not produce fifty.

Well, I reported to the Provost Marshal and was complimented on my “patriotism”. My comrade Trumbull, who was rejected on account of disability, also reported. I was directed to report at Fort Wayne at once. The Commandent, (I have forgotten his name) gave me a welcome I distinctly remember.

“Who sent you here?”

“Oh, you're a conscript, are you? Where are the rest of the boys?”

“The h— they will,” said the Commandant

I was assigned to a certain company and was told to make myself comfortable until morning.

Well, I got supper and breakfast-black, strong coffee, no cream in it, good bread, but without butter. The next morning I applied for a furlough for a few days to go home and bid farewell to wife and friends but he refusted with the remark-

“No, you're the only conscript that's shown up or likely to and we want you as an exhibit”.

I wrote to Marshal Flanigan to intercede for me, telling him I had served my country-drove a four-horse team to pole rasings, marched and carried a banner in the campaign for Fremont, how I had stood around the country store urging the boys to enlist and save the country, etc., and Flanigan sent a request that I be given a short leave. I entertained a furlough came home and found my business in such shape it took a long time to get it settled. Soon General Lee surrendered, the war was over and there terminated by military career as a conscript.