Florence Babbitt and the Babbitt House 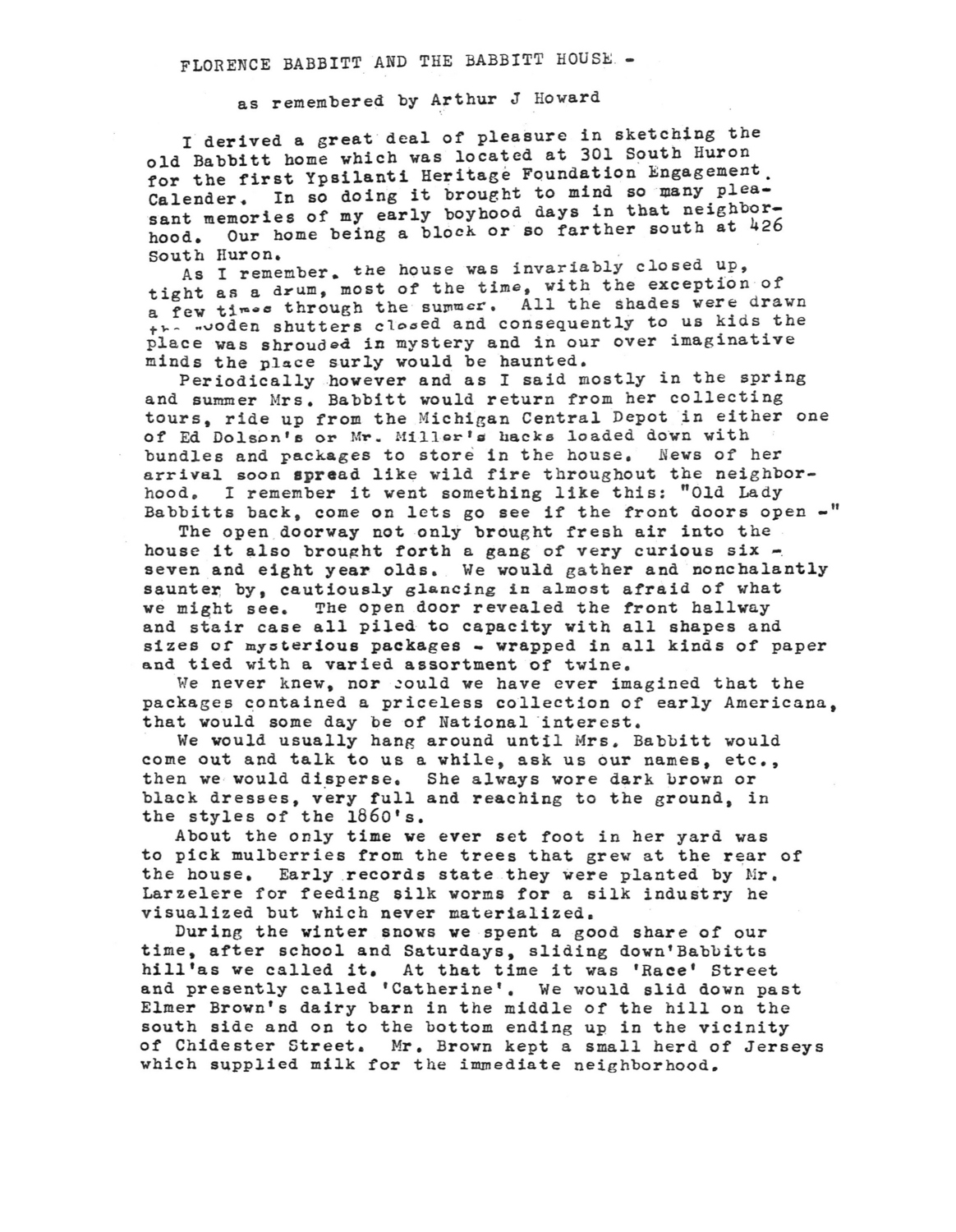 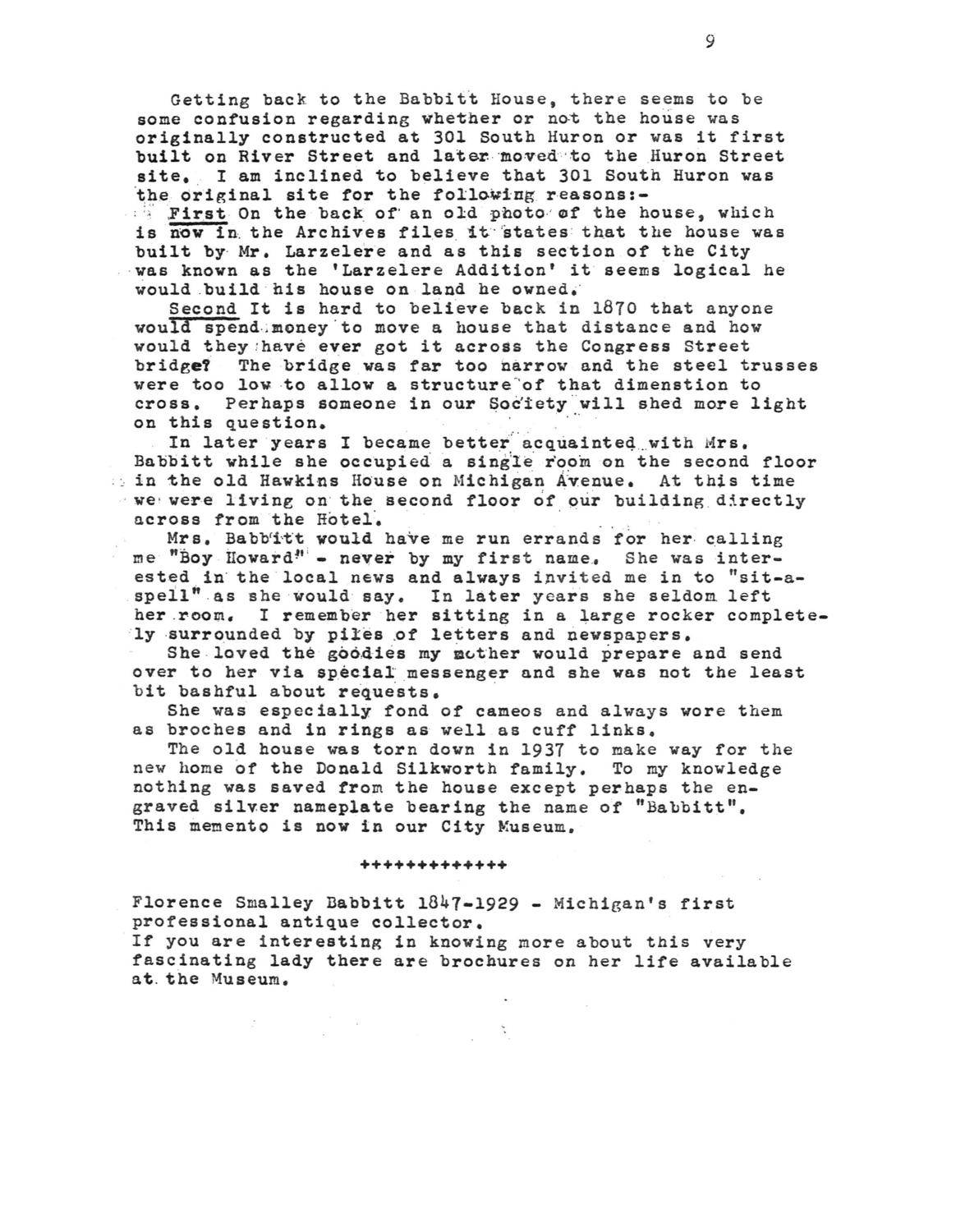 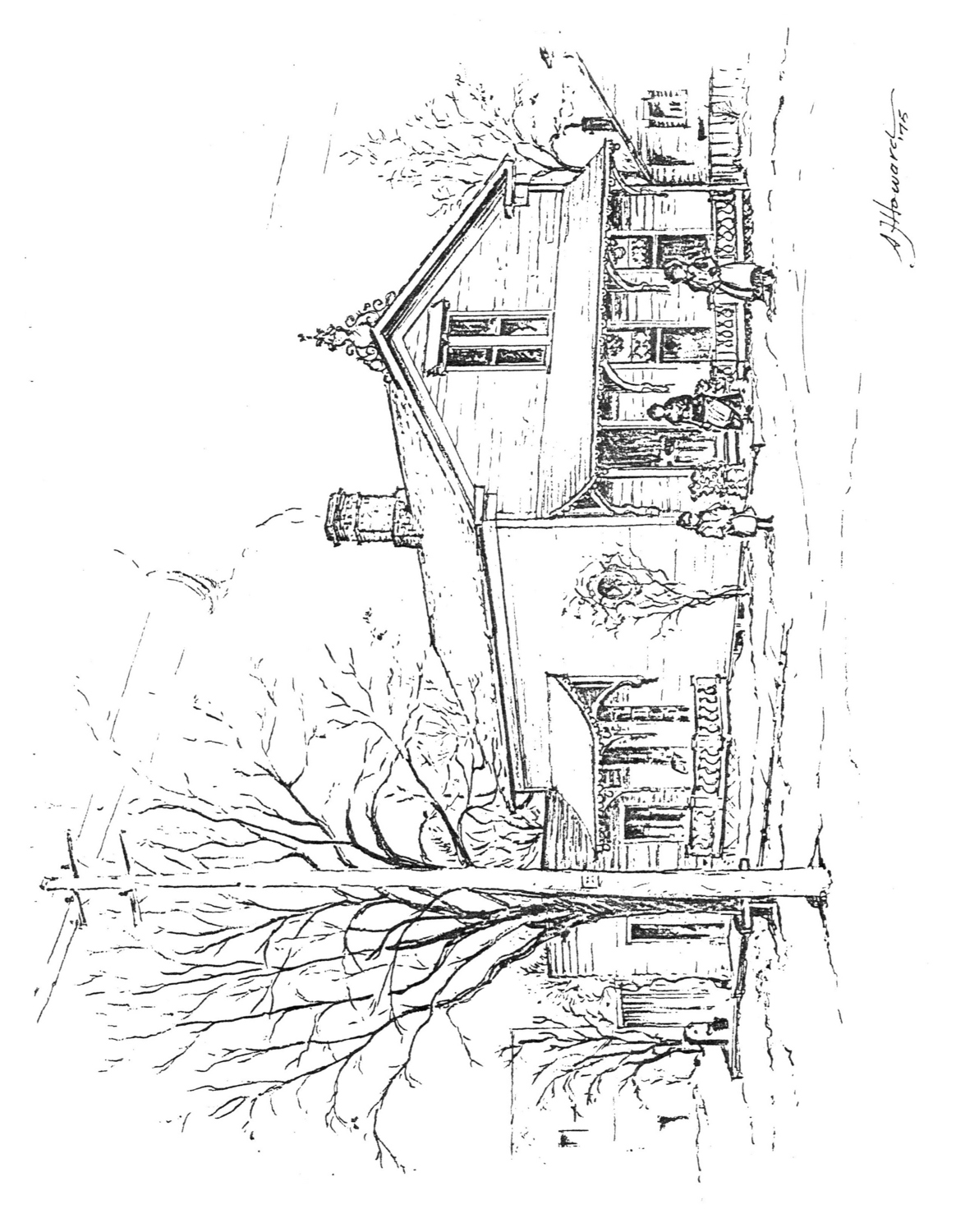 I derived a great deal of pleasure in sketching the old Babbitt home which was located at 301 South Huron for the first Ypsilanti Heritage Foundation Engagement Calender. In so doing it brought to mind so many pleasant memories of my early boyhood days in that neighborhood. Our home being a block or so farther south at 426 South Huron.

As I remember, the house was invariably closed up, tight as a drum, most of the time, with the exception of a few times through the summer. All the shades were drawn the wooden shutters closed and consequently to us kids the place was shrouded in mystery and in our over imaginative minds the place surly would be haunted.

Periodically however and as I said mostly in the spring and summer Mrs. Babbitt would return from her collecting tours, ride up from the Michigan Central Depot in either one of Ed Dolson's or Mr. Miller's hacks loaded down with bundles and packages to store in the house. News of her arrival soon spread like wild fire throughout the neighborhood. I remember it went something like this: “Old Lady Babbitts back, come on lets go see if the front doors open-”

The open doorway not only brought fresh air into the house it also brought forth a gang of very curious six-seven and eight year olds. We would gather and nonchalantly saunter by, cautiously glancing in almost afraid of what we might see. The open door revealed the front hallway and stair case all piled to capacity with all shapes and sizes of mysterious packages-wrapped in all kinds of paper and tied with a varied assortment of twine.

We never knew, nor could we have ever imagined that the packages contained a priceless collection of early Americana, that would some day be of National interest.

We would usually hang around until Mrs. Babbitt would come out and talk to us a while, ask us our names, etc., then we would disperse. She always wore dark brown or black dresses, very full and reaching to the ground, in the styles of the 1860's.

About the only time we ever set foot in her yard was to pick mulberries from the trees that grew at the rear of the house. Early records state they were planted by Mr. Larzelere for feeding silk worms for a silk industry he visualized but which never materialized.

During the winter snows we spent a good share of our time, after school and Saturdays, sliding down'Babbitts hill'as we called it. At that time it was ‘Race’ Street and presently called ‘Catherine’. We would slid down past Elmer Brown's dairy barn in the middle of the hill on the south side and on to the bottom ending up in the vicinity of Chidester Street. Mr. Brown kept a small herd of Jerseys which supplied milk for the immediate neighborhood.

Getting back to the Babbitt House, there seems to be some confusion regarding whether or not the house was originally constructed at 301 South Huron or was it first built on River Street and later moved to the Huron Street site. I am inclined to believe that 301 South Huron was the original site for the following reasons:-

First On the back of an old photo of the house, which is now in the Archives files it “states that the house was built by Mr. Larzelere and as this section of the City was known as the ‘Larzelere Addition’ it seems logical he would build his house on land he owned.

Second It is hard to believe back in 1870 that anyone would spend money to move a house that distance and how would they have ever got it across the Congress Street bridge? The bridge was far too narrow and the steel trusses were too low to allow a structure of that dimenstion to cross. Perhaps someone in our Society will shed more light on this question.

In later years I became better acquainted with Mrs. Babbitt while she occupied a single room on the second floor in the old Hawkins House on Michigan Avenue. At this time we were living on the second floor of our building directly across from the Hotel.

Mrs. Babbitt would have me run errands for her calling me “Boy Howard”-never by my first name. She was interested in the local news and always invited me in to “sit-a-spell” as she would say. In later years she seldom left her room. I remember her sitting in a large rocker completely surrounded by piles of letters and newspapers.

She loved the goodies my mother would prepare and send over to her via special messenger and she was not the least bit bashful about requests.

She was especially fond of cameos and always wore them as broches and in rings as well as cuff links.

The old house was torn down in 1937 to make way for the new home of the Donald Silkworth family. To my knowledge nothing was saved from the house except perhaps the engraved silver nameplate bearing the name of “Babbitt”. This memento is now in our City Museum.

If you are interesting in knowing more about this very fascinating lady there are brochures on her life available at the Museum.

View an image of Florence Babbitt in our Gleanings image gallery.