The Story of the House at 220 North Huron Street 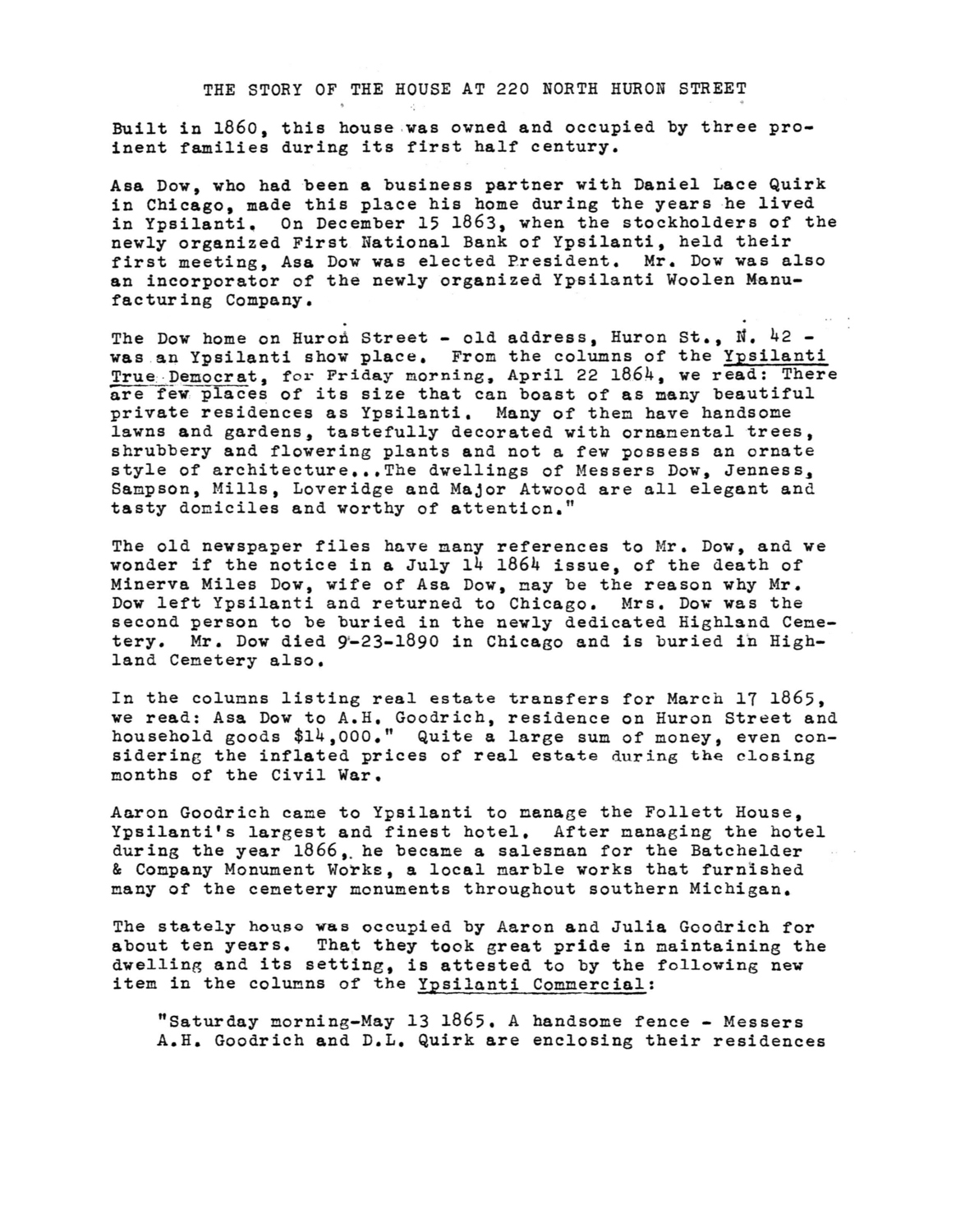 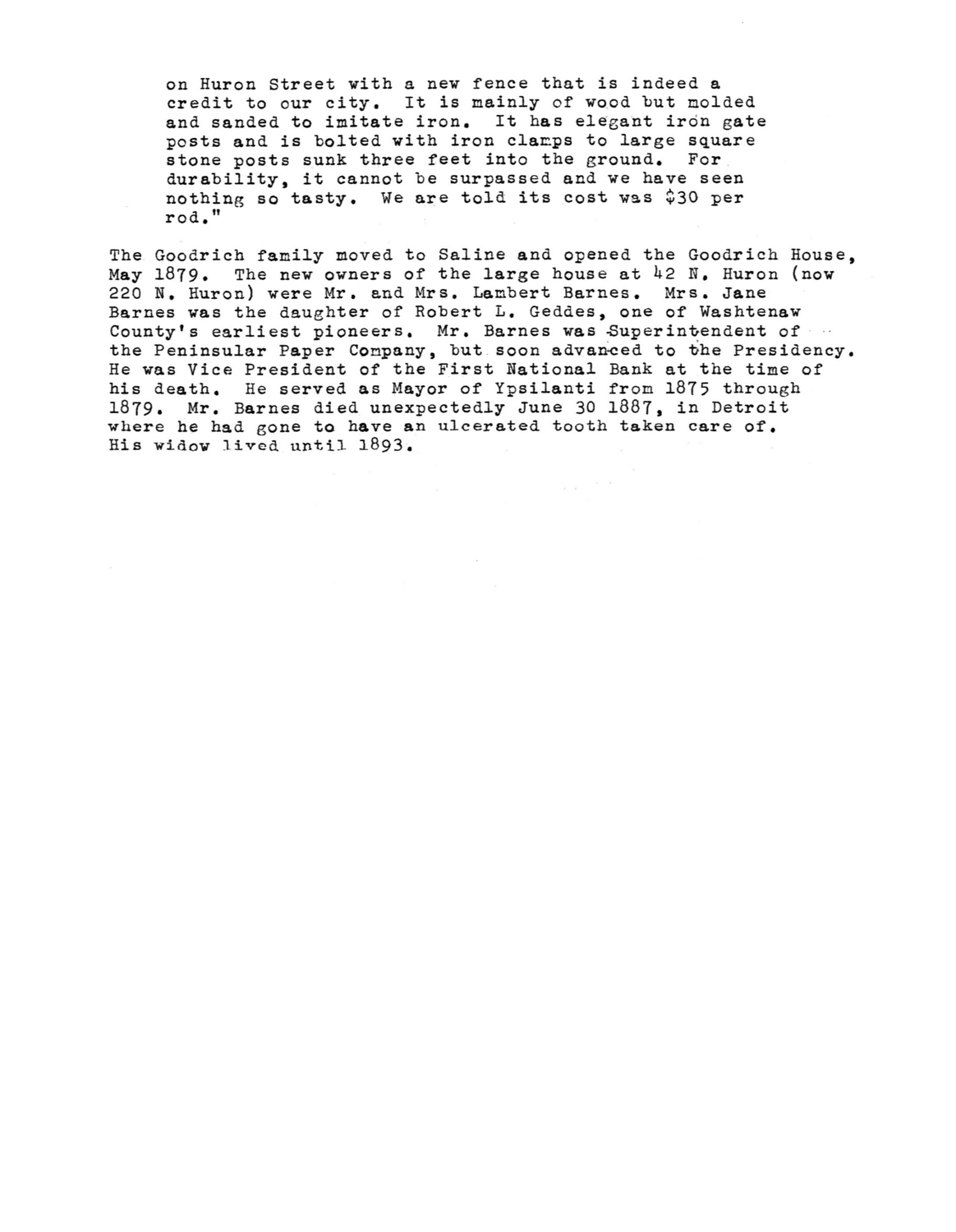 Built in 1860, this house was owned and occupied by three pro-inent families during its first half century.

Asa Dow, who had been a business partner with Daniel Lace Quirk in Chicago, made this place his home during the years he lived in Ypsilanti. On December 15 1863, when the stockholders of the newly organized First National Bank of Ypsilanti, held their first meeting, Asa Dow was elected President. Mr. Dow was also an incorporator of the newly organized Ypsilanti Woolen Manufacturing Company.

The Dow home on Huron Street-old address, Huron St., N. 42-was an Ypsilanti show place. From the columns of the Ypsilanti True Democrat, for Friday morning, April 22 1864, we read: There are few places of its size that can boast of as many beautiful private residences as Ypsilanti. Many of them have handsome lawns and gardens, tastefully decorated with ornamental trees, shrubbery and flowering plants and not a few possess an ornate style of architecture…The dwellings of Messers Dow, Jenness, Sampson, Mills, Loveridge and Major Atwood are all elegant and tasty domiciles and worthy of attention.”

The old newspaper files have many references to Mr. Dow, and we wonder if the notice in a July 14 1864 issue, of the death of Minerva Miles Dow, wife of Asa Dow, may be the reason why Mr. Dow left Ypsilanti and returned to Chicago. Mrs. Dow was the second person to be buried in the newly dedicated Highland Cemetery. Mr. Dow died 9-23-1890 in Chicago and is buried in High-land Cemetery also.

In the columns listing real estate transfers for March 17 1865, we read: Asa Dow to A.H. Goodrich, residence on Huron Street and household goods &dollar;14,000.” Quite a large sum of money, even con-sidering the inflated prices of real estate during the closing months of the Civil War.

Aaron Goodrich came to Ypsilanti to manage the Follett House, Ypsilanti's largest and finest hotel. After managing the hotel during the year 1866, he became a salesman for the Batchelder & Company Monument Works, a local marble works that furnished many of the cemetery monuments throughout southern Michigan.

The stately house was occupied by Aaron and Julia Goodrich for about ten years. That they took great pride in maintaining the dwelling and its setting, is attested to by the following new item in the columns of the Ypsilanti Commercial:

“Saturday morning-May 13 1865. A handsome fence-Messers A.H. Goodrich and D.L. Quirk are enclosing their residences on Huron Street with a new fence that is indeed a credit to our city. It is mainly of wood but molded and sanded to imitate iron. It has elegant iron gate posts and is bolted with iron clamps to large square stone posts sunk three feet into the ground. For durability, it cannot be surpassed and we have seen nothing so tasty. We are told its cost was $30 per rod.”

The Goodrich family moved to Saline and opened the Goodrich House, May 1879. The new owners of the large house at 42 N. Huron (now 220 N. Huron) were Mr. and Mrs. Lambert Barnes. Mrs. Jane Barnes was the daughter of Robert L. Geddes, one of Washtenaw County's earliest pioneers. Mr. Barnes was Superintendent of the Peninsular Paper Company, but soon advanced to the Presidency. He was Vice President of the First National Bank at the time of his death. He served as Mayor of Ypsilanti from 1875 through 1879. Mr. Barnes died unexpectedly June 30 1887, in Detroit where he had gone to have an ulcerated tooth taken care of. His widow lived until 1893.