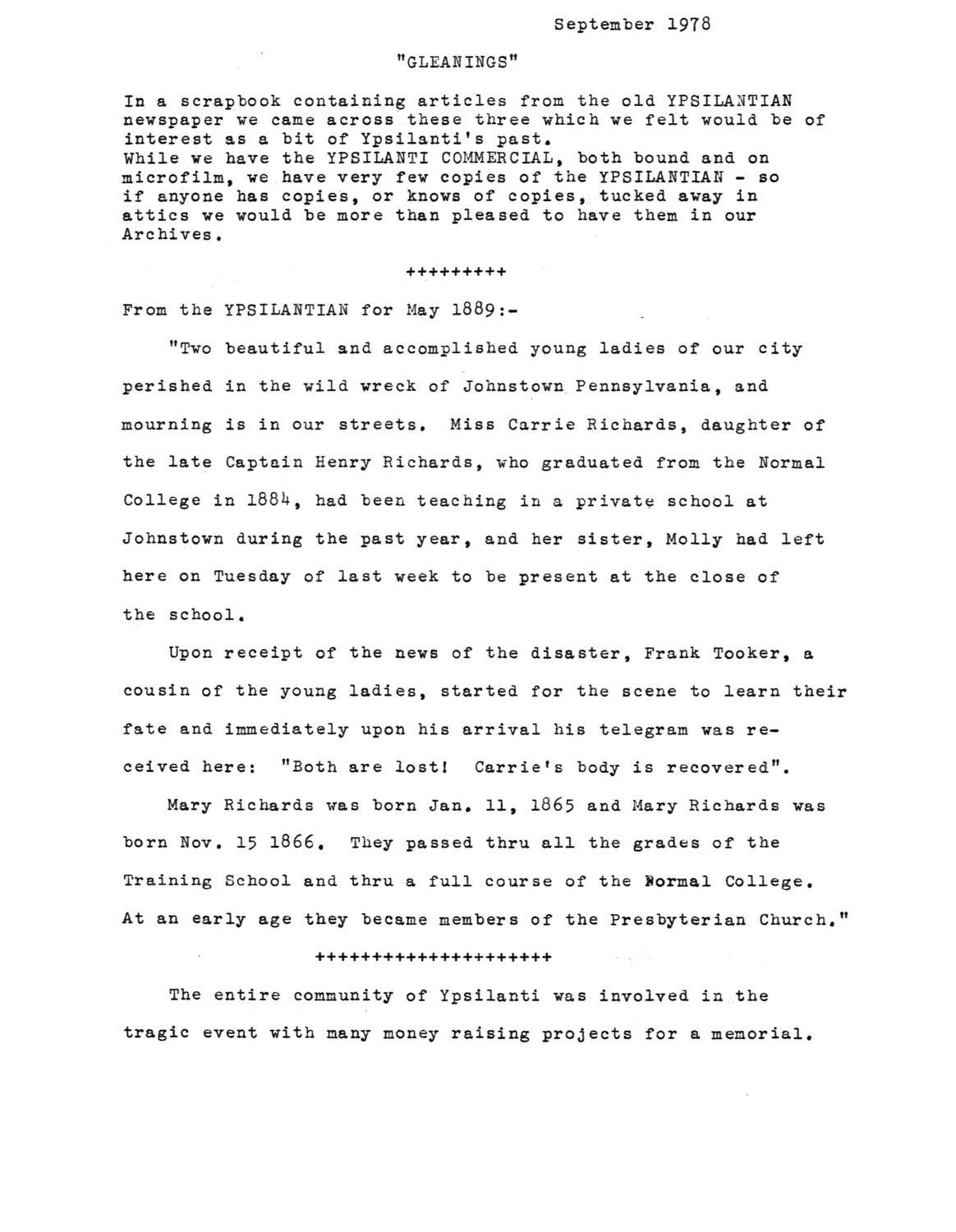 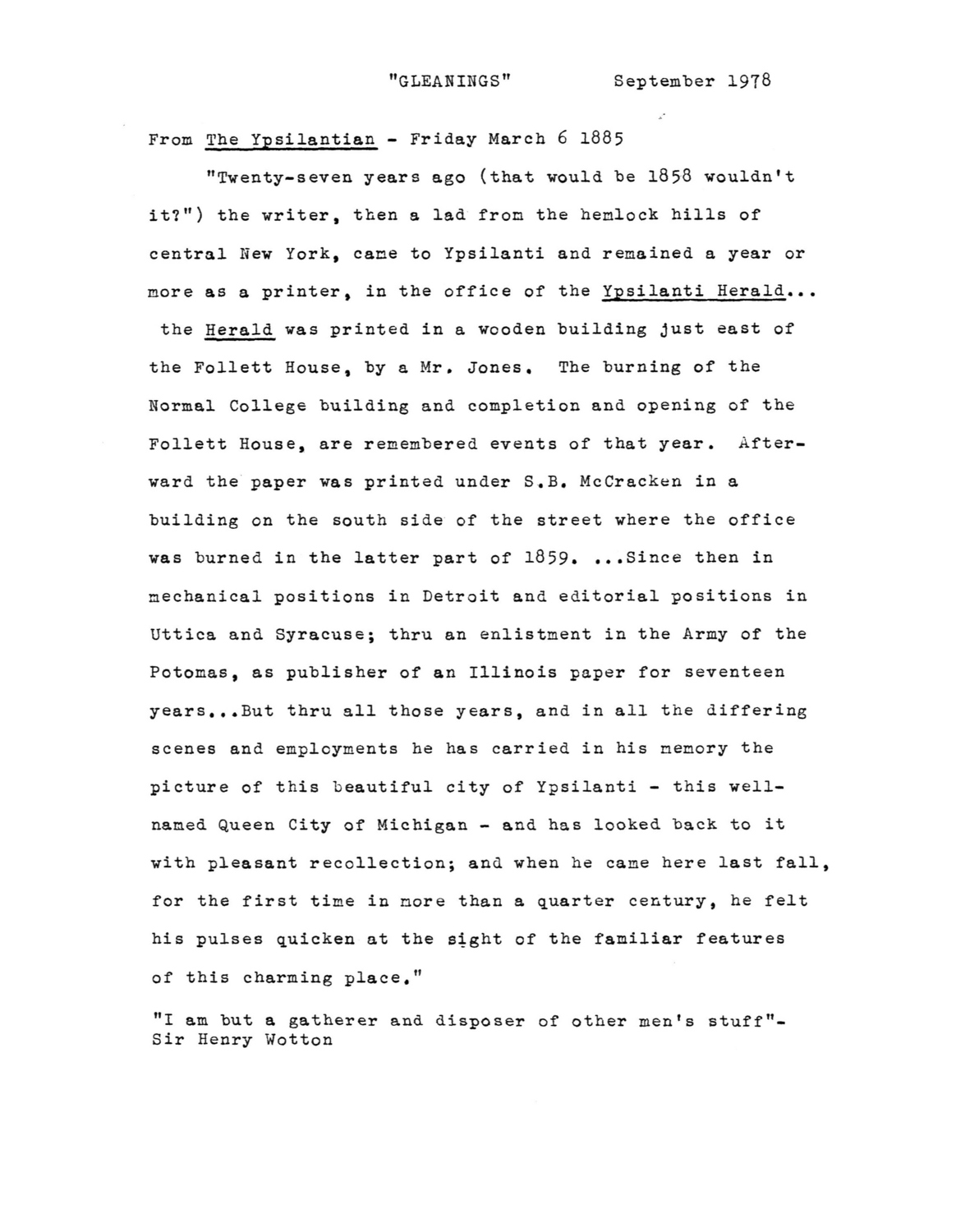 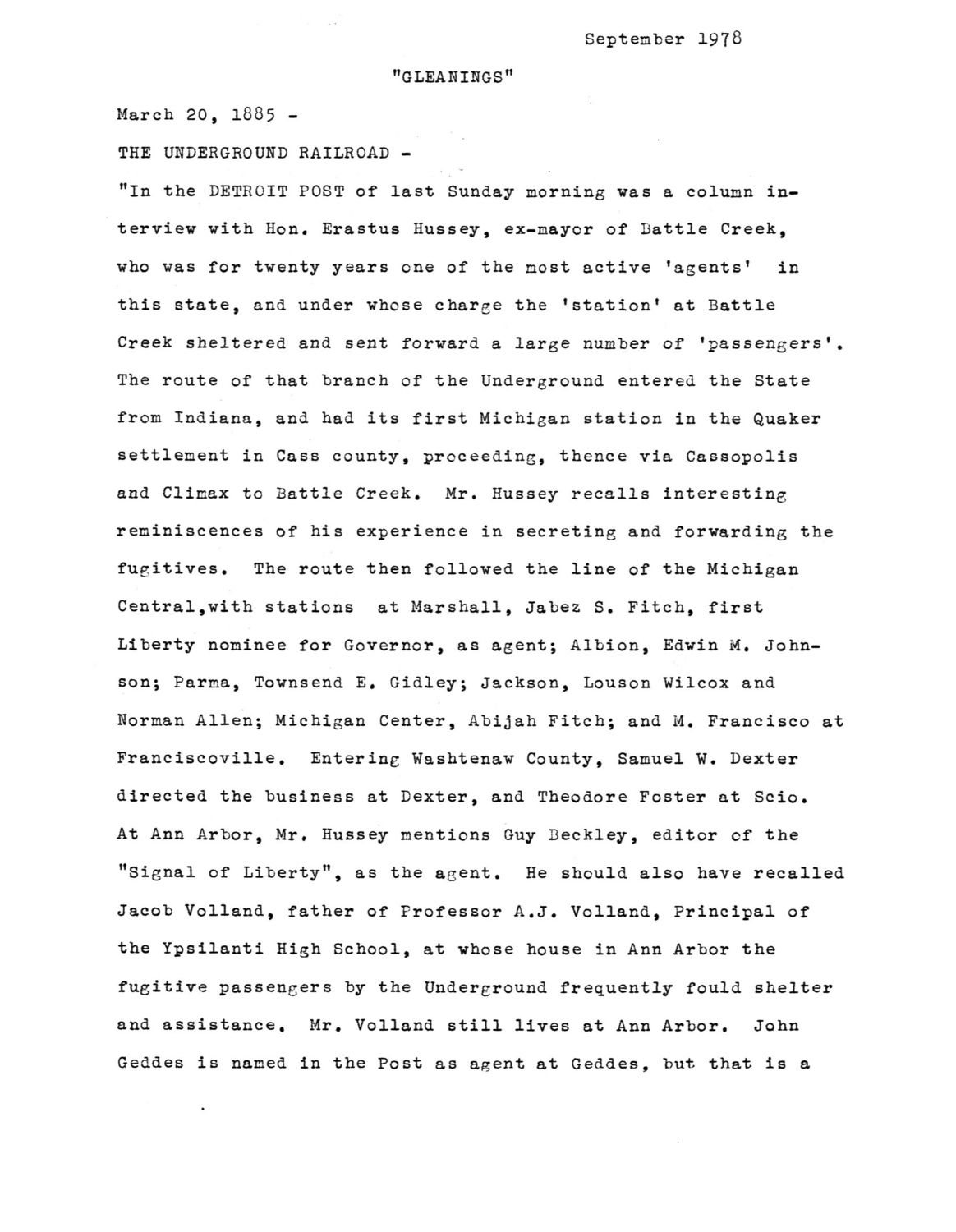 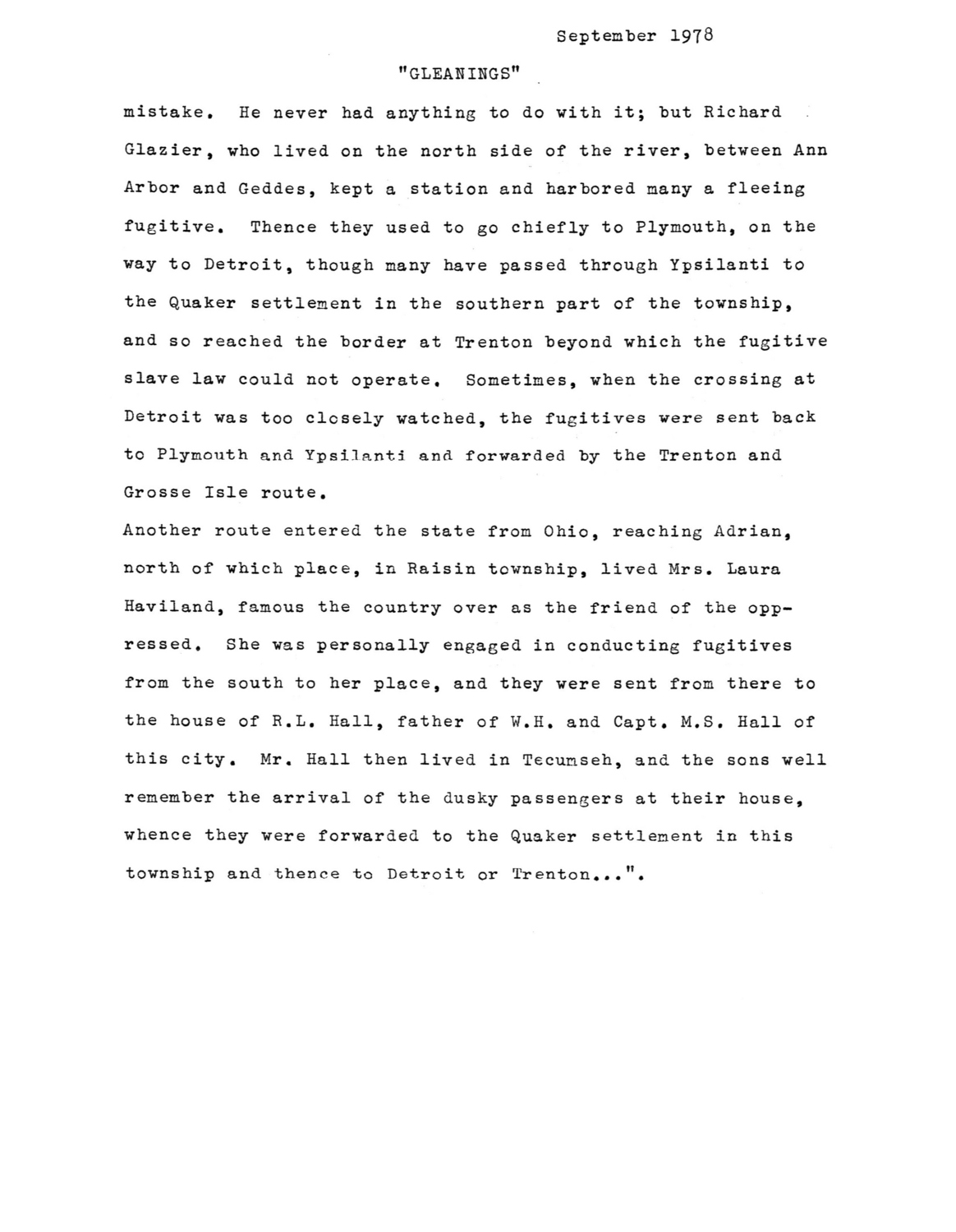 In a scrapbook containing articles from the old YPSILANTIAN newspaper we came across these three which we felt would be of interest as a bit of Ypsilanti's past.

While we have the YPSILANTI COMMERCIAL, both bound and on microfilm, we have very few copies of the YPSILANTIAN-so if anyone has copies, or knows of copies, tucked away in attics we would be more than pleased to have them in our Archives.

“Two beautiful and accomplished young ladies of our city perished in the wild wreck of Johnstown Pennsylvania, and mourning is in our streets. Miss Carrie Richards, daughter of the late Captain Henry Richards, who graduated from the Normal College in 1884, had been teaching in a private school at Johnstown during the past year, and her sister, Molly had left here on Tuesday of last week to be present at the close of the school.

Upon receipt of the news of the disaster, Frank Tooker, a cousin of the young ladies, started for the scene to learn their fate and immediately upon his arrival his telegram was re-ceived here: “Both are lost! Carrie's body is recovered”.

The entire community of Ypsilanti was involved in the tragic event with many money raising projects for a memorial.

“Twenty-seven years ago (that would be 1858 wouldn't it?”) the writer, then a lad from the hemlock hills of central New York, came to Ypsilanti and remained a year or more as a printer, in the office of the Ypsilanti Herald… the Herald was printed in a wooden building just east of the Follett House, by a Mr. Jones. The burning of the Normal College building and completion and opening of the Follett House, are remembered events of that year. After-ward the paper was printed under S.B. McCracken in a building on the south side of the street where the office was burned in the latter part of 1859. …Since then in mechanical positions in Detroit and editorial positions in Uttica and Syracuse; thru an enlistment in the Army of the Potomas, as publisher of an Illinois paper for seventeen years…But thru all those years, and in all the differing scenes and employments he has carried in his memory the picture of this beautiful city of Ypsilanti-this well-named Queen City of Michigan-and has looked back to it with pleasant recollection; and when he came here last fall, for the first time in more than a quarter century, he felt his pulses quicken at the sight of the familiar features of this charming place.”

“In the DETROIT POST of last Sunday morning was a column in-terview with Hon. Erastus Hussey, ex-mayor of Battle Creek, who was for twenty years one of the most active ‘agents’ in this state, and under whose charge the ‘station’ at Battle Creek sheltered and sent forward a large number of ‘passengers’. The route of that branch of the Underground entered the State from Indiana, and had its first Michigan station in the Quaker settlement in Cass county, proceeding, thence via Cassopolis and Climax to Battle Creek. Mr. Hussey recalls interesting reminiscences of his experience in secreting and forwarding the fugitives. The route then followed the line of the Michigan Central, with stations at Marshall, Jabez S. Fitch, first Liberty nominee for Governor, as agent; Albion, Edwin M. John-son; Parma, Townsend E. Gidley; Jackson, Louson Wilcox and Norman Allen; Michigan Center, Abijah Fitch; and M. Francisco at Franciscoville. Entering Washtenaw County, Samuel W. Dexter directed the business at Dexter, and Theodore Foster at Scio. At Ann Arbor, Mr. Hussey mentions Guy Beckley, editor of the “Signal of Liberty”, as the agent. He should also have recalled Jacob Volland, father of Professor A.J. Volland, Principal of the Ypsilanti High School, at whose house in Ann Arbor the fugitive passengers by the Underground frequently fould shelter and assistance. Mr. Volland still lives at Ann Arbor. John Geddes is named in the Post as agent at Geddes, but that is a mistake. He never had anything to do with it; but Richard Glazier, who lived on the north side of the river, between Ann Arbor and Geddes, kept a station and harbored many a fleeing fugitive. Thence they used to go chiefly to Plymouth, on the way to Detroit, though many have passed through Ypsilanti to the Quaker settlement in the southern part of the township, and so reached the border at Trenton beyond which the fugitive slave law could not operate. Sometimes, when the crossing at Detroit was too closely watched, the fugitives were sent back to Plymouth and Ypsilanti and forwarded by the Trenton and Grosse Isle route.

Another route entered the state from Ohio, reaching Adrian, north of which place, in Raisin township, lived Mrs. Laura Haviland, famous the country over as the friend of the opp-ressed. She was personally engaged in conducting fugitives from the south to her place, and they were sent from there to the house of R.L. Hall, father of W.H. and Capt. M.S. Hall of this city. Mr. Hall then lived in Tecumseh, and the sons well remember the arrival of the dusky passengers at their house, whence they were forwarded to the Quaker settlement in this township and thence to Detroit or Trenton…”.