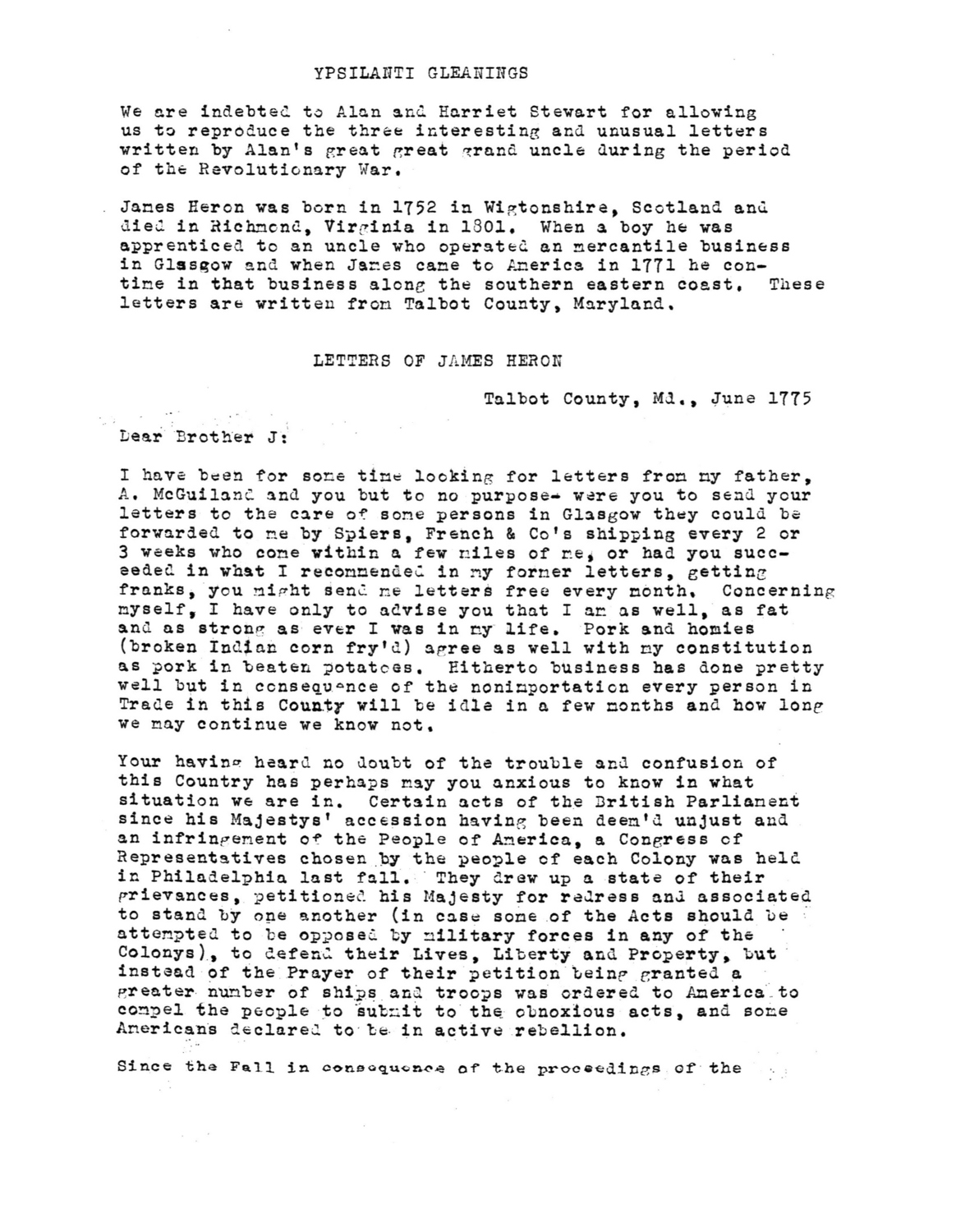 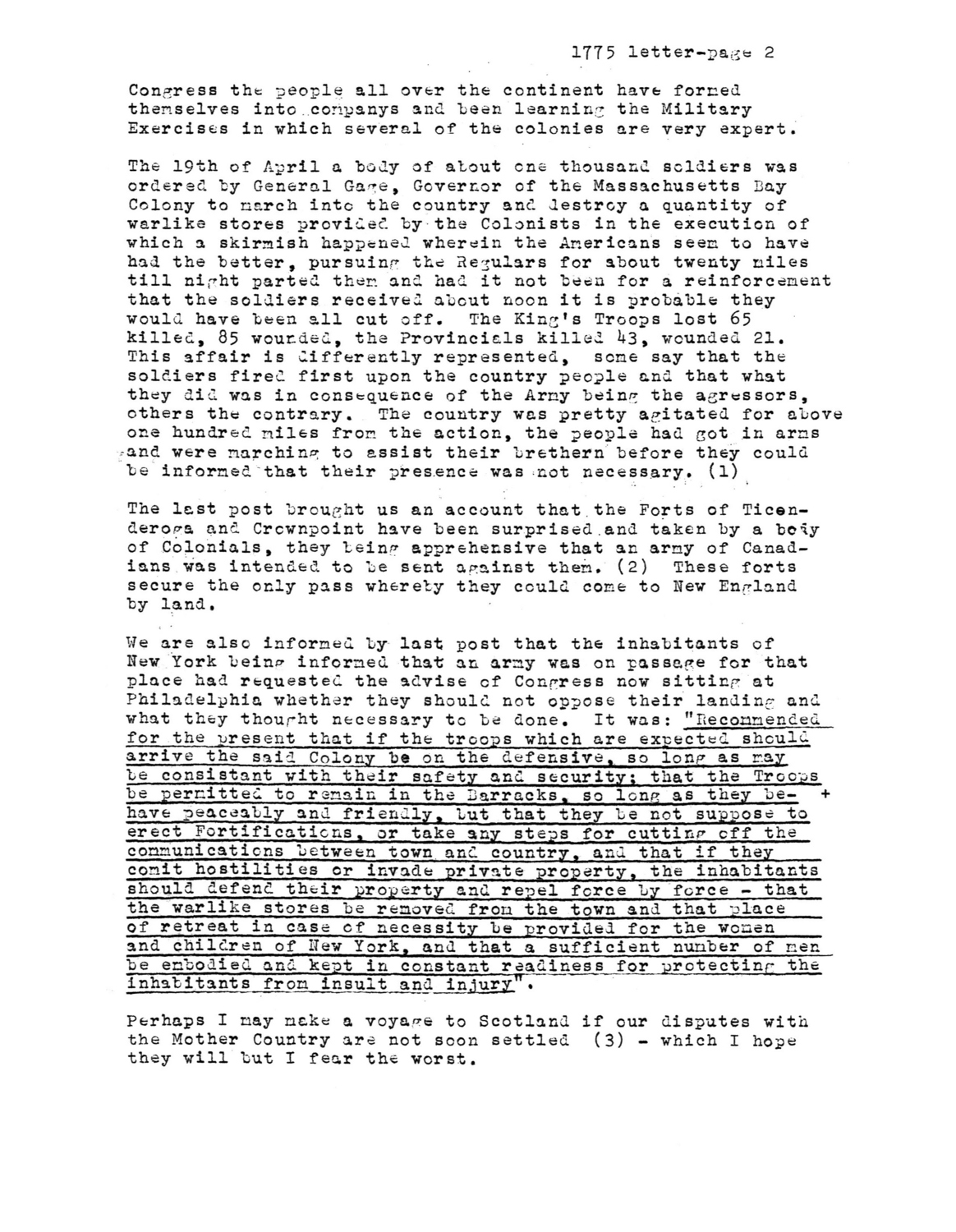 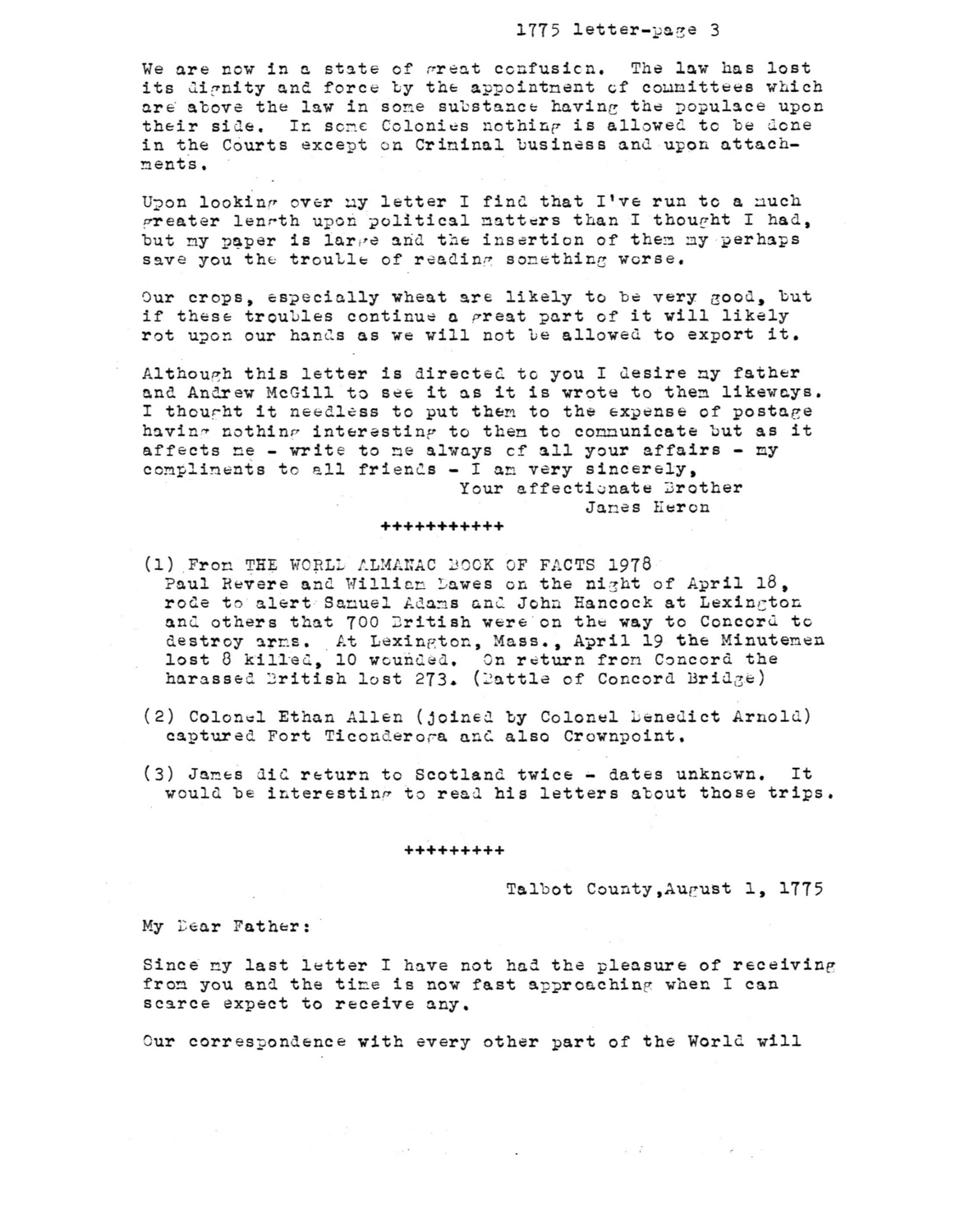 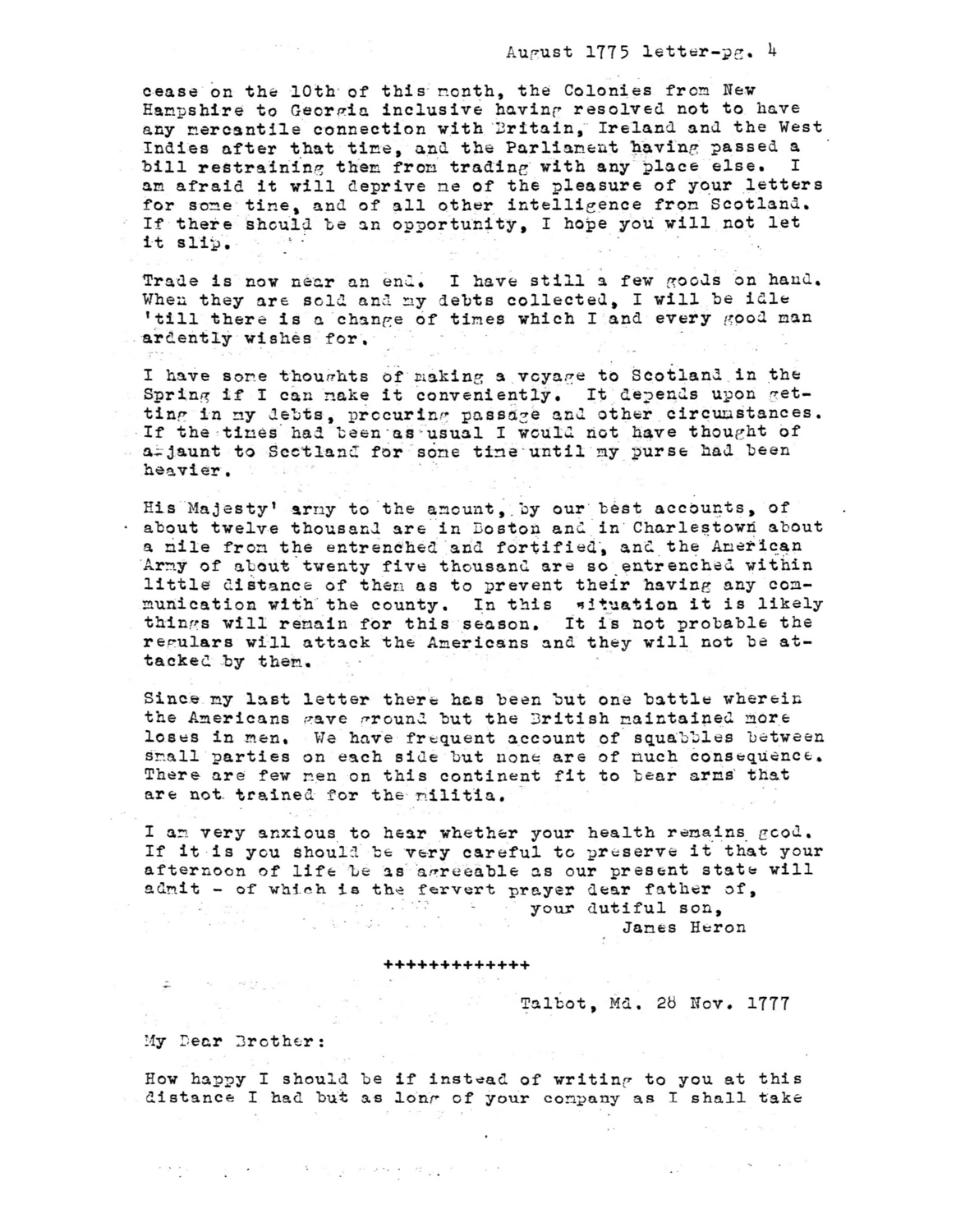 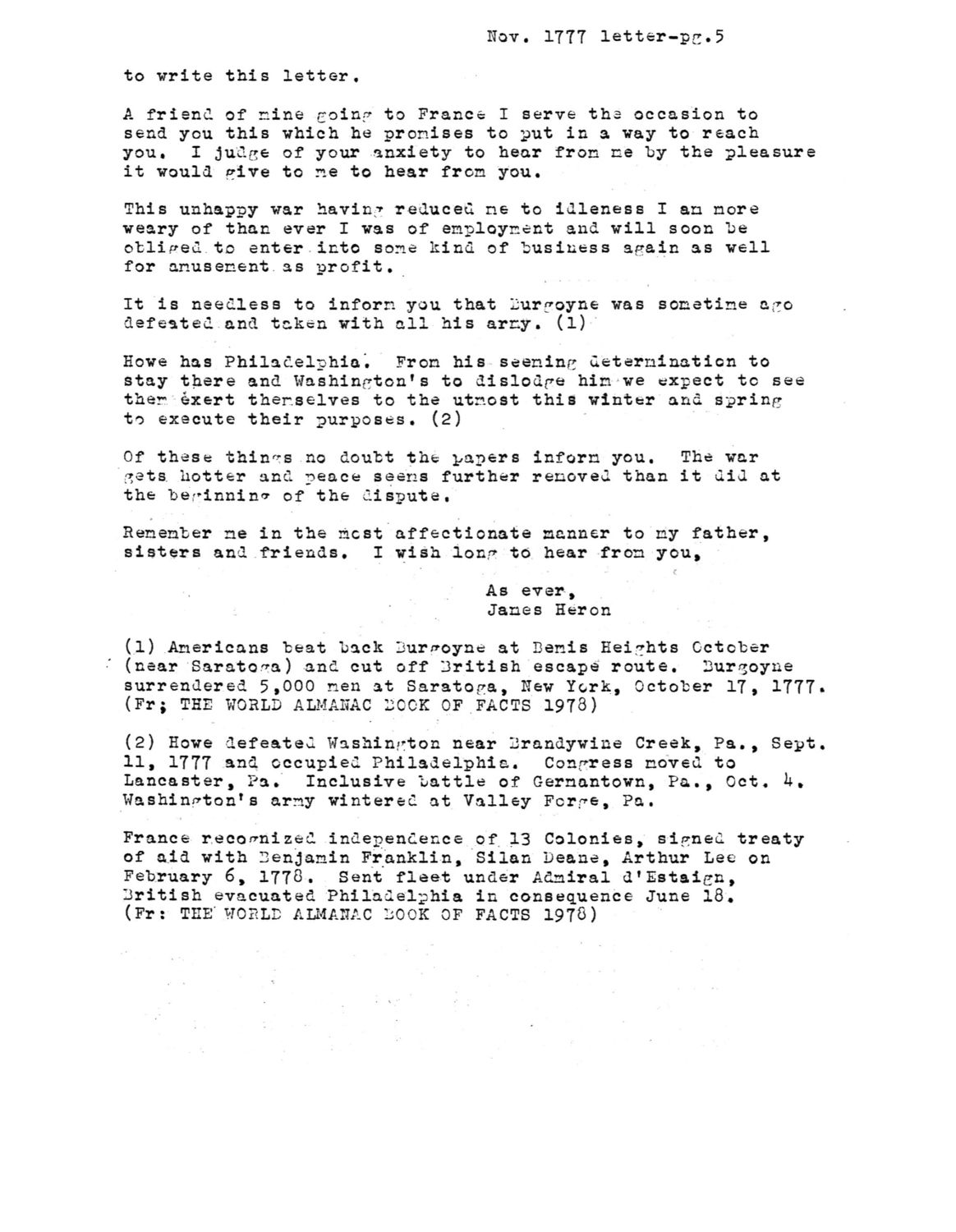 We are indebted to Alan and Harriet Stewart for allowing us to reproduce the three interesting and unusual letters written by Alan's great great grand uncle during the period of the Revolutionary War.

James Heron was born in 1752 in Wigtonshire, Scotland and died in Richmond, Virginia in 1801. When a boy he was apprenticed to an uncle who operated an mercantile business in Glasgow and when James came to America in 1771 he contime in that business along the southern eastern coast. These letters are written from Talbot County, Maryland.

I have been for some time looking for letters from my father, A. McGuiland and you but to no purpose-were you to send your letters to the care of some persons in Glasgow they could be forwarded to me by Spiers, French & Co's shipping every 2 or 3 weeks who come within a few miles of me, or had you succeeded in what I recommended in my former letters, getting franks, you might send me letters free every month. Concerning myself, I have only to advise you that I am as well, as fat and as strong as ever I was in my life. Pork and homies (broken Indian corn fry'd) agree as well with my constitution as pork in beaten potatoes. Hitherto business has done pretty well but in consequence of the nonimportation every person in Trade in this County will be idle in a few months and how long we may continue we know not.

Your having heard no doubt of the trouble and confusion of this Country has perhaps may you anxious to know in what situation we are in. Certain acts of the British Parliament since his Majestys' accession having been deem'd unjust and an infringement of the People of America, a Congress of Representatives chosen by the people of each Colony was held in Philadelphia last fall. They drew up a state of their grievances, petitioned his Majesty for redress and associated to stand by one another (in case some of the Acts should be attempted to be opposed by military forces in any of the Colonys), to defend their Lives, Liberty and Property, but instead of the Prayer of their petition being granted a greater number of ships and troops was ordered to America to compel the people to submit to the obnoxious acts, and some Americans declared to be in active rebellion.

Since the Fall in consequence of the proceedings of the Congress the people all over the continent have formed themselves into companys and been learning the Military Exercises in which several of the colonies are very expert.

The 19th of April a body of about one thousand soldiers was ordered by General Gage, Governor of the Massachusetts Bay Colony to march into the country and destroy a quantity of warlike stores provided by the Colonists in the execution of which a skirmish happened wherein the Americans seem to have had the better, pursuing the Regulars for about twenty miles till night parted them and had it not been for a reinforcement that the soldiers received about noon it is probable they would have been all cut off. The King's Troops lost 65 killed, 85 wounded, the Provincials killed 43, wounded 21. This affair is differently represented, some say that the soldiers fired first upon the country people and that what they did was in consequence of the Army being the agressors, others the contrary. The country was pretty agitated for above one hundred miles from the action, the people had got in arms and were marching to assist their brethern before they could be informed that their presence was not necessary. (1)

The last post brought us an account that the Forts of Ticenderoga and Crownpoint have been surprised and taken by a body of Colonials, they being apprehensive that an army of Canadians was intended to be sent against them. (2) These forts secure the only pass whereby they could come to New England by land.

We are also informed by last post that the inhabitants of New York being informed that an army was on passage for that place had requested the advise of Congress now sitting at Philadelphia whether they should not oppose their landing and what they thought necessary to be done. It was: “Recommended for the present that if the troops which are expected should arrive the said Colony be on the defensive, so long as may be consistant with their safety and security; that the Troops be permitted to remain in the Barracks, so long as they be-&plus; have peaceably and friendly, but that they be not suppose to erect Fortifications, or take any steps for cutting off the communications between town and country, and that if they comit hostilities or invade private property, the inhabitants should defend their property and repel force by force-that the warlike stores be removed from the town and that place of retreat in case of necessity be provided for the women and children of New York, and that a sufficient number of men be embodied and kept in constant readiness for protecting the inhabitants from insult and injury”.

Perhaps I may make a voyage to Scotland if our disputes with the Mother Country are not soon settled (3)-which I hope they will but I fear the worst.

We are now in a state of great confusion. The law has lost its dignity and force by the appointment of committees which are above the law in some substance having the populace upon their side. In some Colonies nothing is allowed to be done in the Courts except on Criminal business and upon attachments.

Upon looking over my letter I find that I've run to a much greater length upon political matters than I thought I had, but my paper is large and the insertion of them my perhaps save you the trouble of reading something worse.

Our crops, especially wheat are likely to be very good, but if these troubles continue a great part of it will likely rot upon our hands as we will not be allowed to export it.

Although this letter is directed to you I desire my father and Andrew McGill to see it as it is wrote to them likeways. I thought it needless to put them to the expense of postage having nothing interesting to them to communicate but as it affects me-write to me always of all your affairs-my compliments to all friends-I am very sincerely,


(1) From THE WORLD ALMANAC BOOK OF FACTS 1978
Paul Revere and William Lawes on the night of April 18, rode to alert Samuel Adams and John Hancock at Lexington and others that 700 British were on the way to Concord to destroy arms. At Lexington, Mass., April 19 the Minutemen lost 8 killed, 10 wounded. On return from Concord the harassed British lost 273. (Battle of Concord Bridge)
(2) Colonel Ethan Allen (joined by Colonel benedict Arnold) captured Fort Ticonderoga and also Crownpoint.
(3) James did return to Scotland twice-dates unknown. It would be interesting to read his letters about those trips.

Since my last letter I have not had the pleasure of receiving from you and the time is now fast approaching when I can scarce expect to receive any.

Our correspondence with every other part of the World will cease on the 10th of this month, the Colonies from New Hampshire to Georgia inclusive having resolved not to have any mercantile connection with Britain, Ireland and the West Indies after that time, and the Parliament having passed a bill restraining them from trading with any place else. I am afraid it will deprive me of the pleasure of your letters for some time, and of all other intelligence from Scotland. If there should be an opportunity, I hope you will not let it slip.

Trade is now near an end. I have still a few goods on hand. When they are sold and my debts collected, I will be idle ‘till there is a change of times which I and every good man ardently wishes for.

I have some thoughts of making a voyage to Scotland in the Spring if I can make it conveniently. It depends upon getting in my debts, procuring passage and other circumstances. If the times had been as usual I would not have thought of a jaunt to Scotland for some time until my purse had been heavier.

His Majesty' army to the amount, by our best accounts, of about twelve thousand are in Boston and in Charlestown about a mile from the entrenched and fortified, and the American Army of about twenty five thousand are so entrenched within little distance of then as to prevent their having any communication with the county. In this situation it is likely things will remain for this season. It is not probable the regulars will attack the Americans and they will not be attacked by them.

Since my last letter there has been but one battle wherein the Americans gave ground but the British maintained more loses in men. We have frequent account of squabbles between small parties on each side but none are of much consequence. There are few men on this continent fit to bear arms that are not trained for the militia.

I am very anxious to hear whether your health remains good. If it is you should be very careful to preserve it that your afternoon of life be as agreeable as our present state will admit-of which is the fervert prayer dear father of,

How happy I should be if instead of writing to you at this distance I had but as long of your company as I shall take to write this letter.

A friend of mine going to France I serve the occasion to send you this which he promises to put in a way to reach you, I judge of your anxiety to hear from me by the pleasure it would give to me to hear from you.

This unhappy war having reduced me to idleness I am more weary of than ever I was of employment and will soon be obliged to enter into some kind of business again as well for amusement as profit.

It is needless to inform you that Burgoyne was sometime ago defeated and taken with all his army. (1)

Howe has Philadelphia. From his seeming determination to stay there and Washington's to dislodge him we expect to see them exert themselves to the utmost this winter and spring to execute their purposes. (2)

Of these things no doubt the papers inform you. The war gets hotter and peace seems further removed than it did at the beginning of the dispute.

Remember me in the most affectionate manner to my father, sisters and friends. I wish long to hear from you,

As ever,
James Heron