Annual Report of the Museum Director 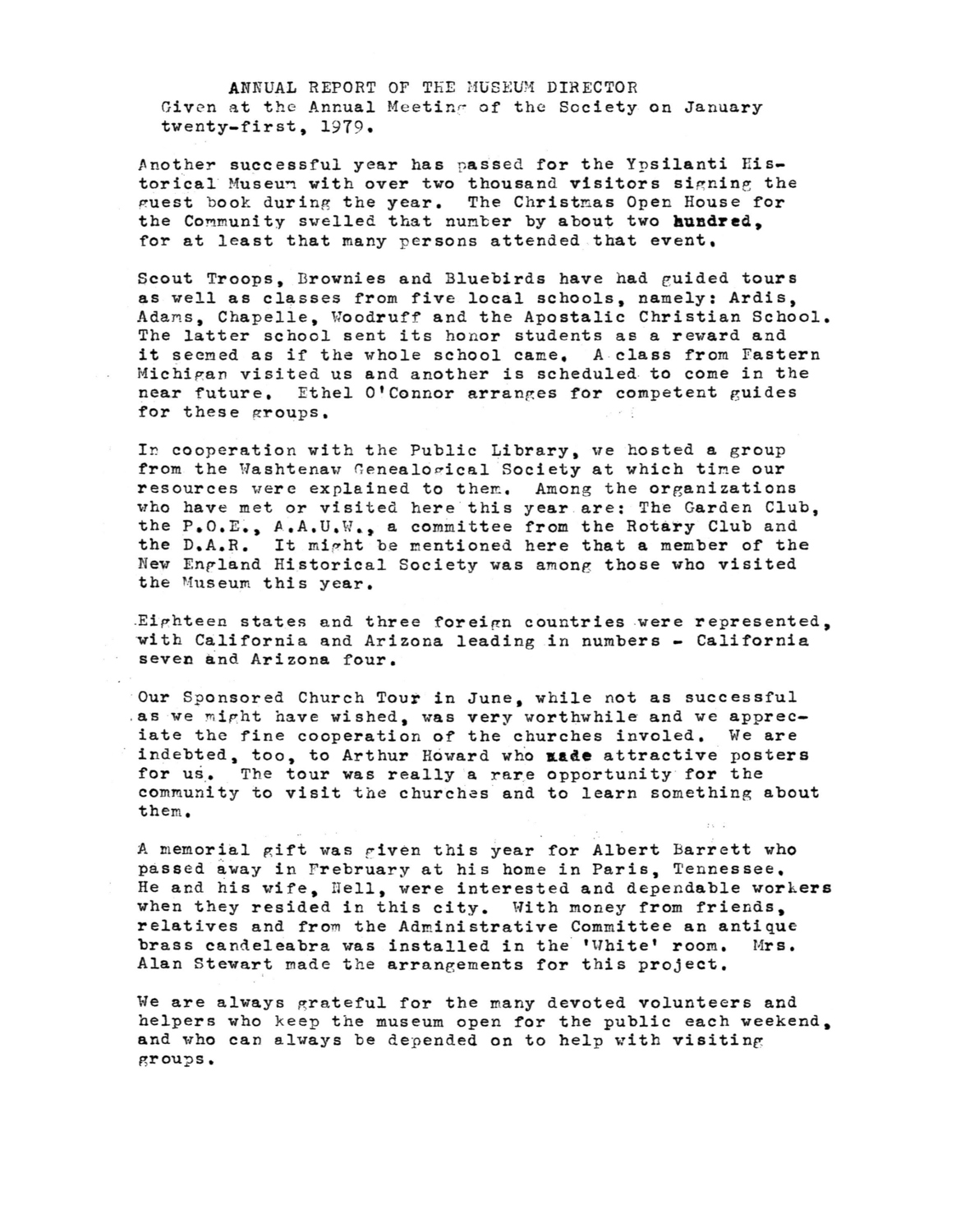 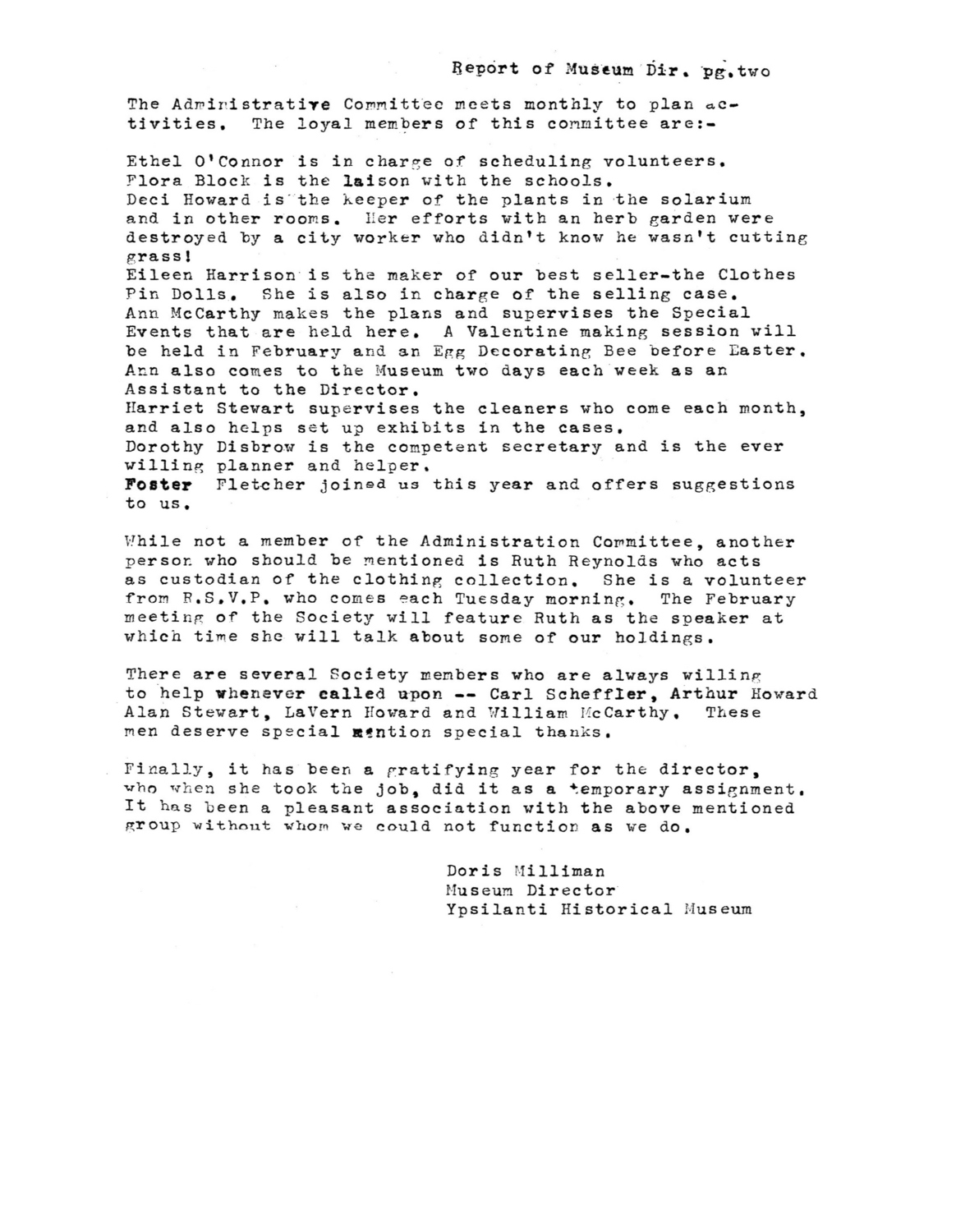 Given at the Annual Meeting of the Society on January twenty-first, 1979.

Another successful year has passed for the Ypsilanti Historical Museum with over two thousand visitors signing the guest book during the year. The Christmas Open House for the Community swelled that number by about two hundred, for at least that many persons attended that event.

Scout Troops, Brownies and Bluebirds have had guided tours as well as classes from five local schools, namely: Ardis, Adams, Chapelle, Woodruff and the Apostalic Christian School. The latter school sent its honor students as a reward and it seemed as if the whole school came. A class from Fastern Michigan visited us and another is scheduled to come in the near future. Ethel O'Connor arranges for competent guides for these groups.

In cooperation with the Public Library, we hosted a group from the Washtenaw Genealogical Society at which time our resources were explained to them. Among the organizations who have met or visited here this year are: The Garden Club, the P.O.E., A.A.U.W., a committee from the Rotary Club and the D.A.R. It might be mentioned here that a member of the New England Historical Society was among those who visited the Museum this year.

Eighteen states and three foreign countries were represented, with California and Arizona leading in numbers-California seven and Arizona four.

Our Sponsored Church Tour in June, while not as successful as we might have wished, was very worthwhile and we appreciate the fine cooperation of the churches involed. We are indebted, too, to Arthur Howard who made attractive posters for us. The tour was really a rare opportunity for the community to visit the churches and to learn something about them.

A memorial gift was given this year for Albert Barrett who passed away in Frebruary at his home in Paris, Tennessee, He and his wife, Nell, were interested and dependable workers when they resided in this city. With money from friends, relatives and from the Administrative Committee an antique brass candeleabra was installed in the ‘White’ room. Mrs. Alan Stewart made the arrangements for this project.

We are always grateful for the many devoted volunteers and helpers who keep the museum open for the public each weekend, and who can always be depended on to help with visiting groups.

The Administrative Committee meets monthly to plan activities. The loyal members of this committee are:-

Ethel O'Connor is in charge of scheduling volunteers. Flora Block is the laison with the schools.

Deci Howard is the keeper of the plants in the solarium and in other rooms. Her efforts with an herb garden were destroyed by a city worker who didn't know he wasn't cutting grass!

Eileen Harrison is the maker of our best seller-the Clothes Pin Dolls. She is also in charge of the selling case.

Ann McCarthy makes the plans and supervises the Special Events that are held here. A Valentine making session will be held in February and an Egg Decorating Bee before Baster. Ann also comes to the Museum two days each week as an Assistant to the Director.

Harriet Stewart supervises the cleaners who come each month, and also helps set up exhibits in the cases.

Dorothy Disbrow is the competent secretary and is the ever willing planner and helper.

Foster Fletcher joined us this year and offers suggestions to us.

While not a member of the Administration Committee, another person who should be mentioned is Ruth Reynolds who acts as custodian of the clothing collection. She is a volunteer from R.S.V.P. who comes each Tuesday morning. The February meeting of the Society will feature Ruth as the speaker at which time she will talk about some of our holdings.

Finally, it has been a gratifying year for the director, who when she took the job, did it as a temporary assignment. It has been a pleasant association with the above mentioned group without whom we could not function as we do.