News from the Museum 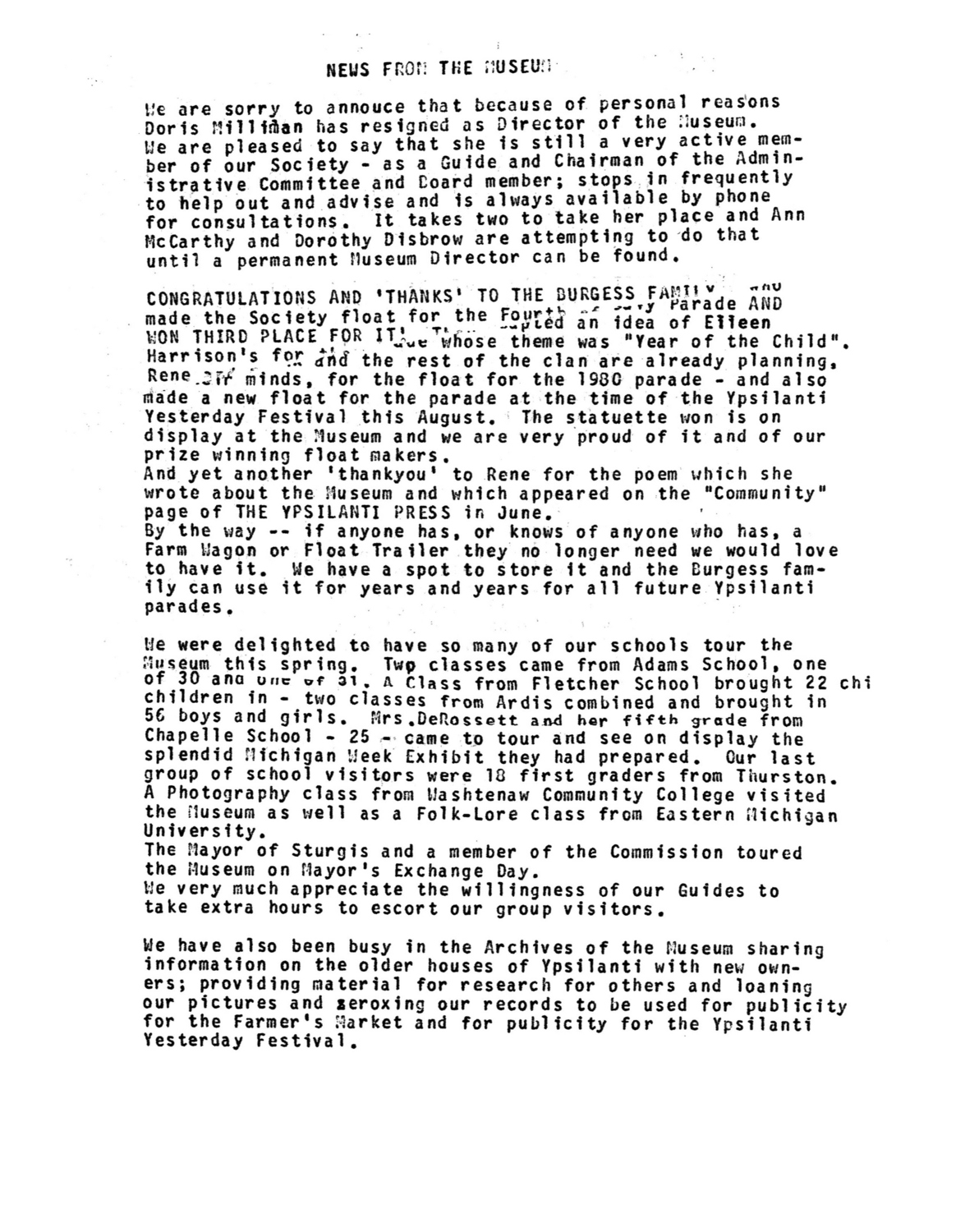 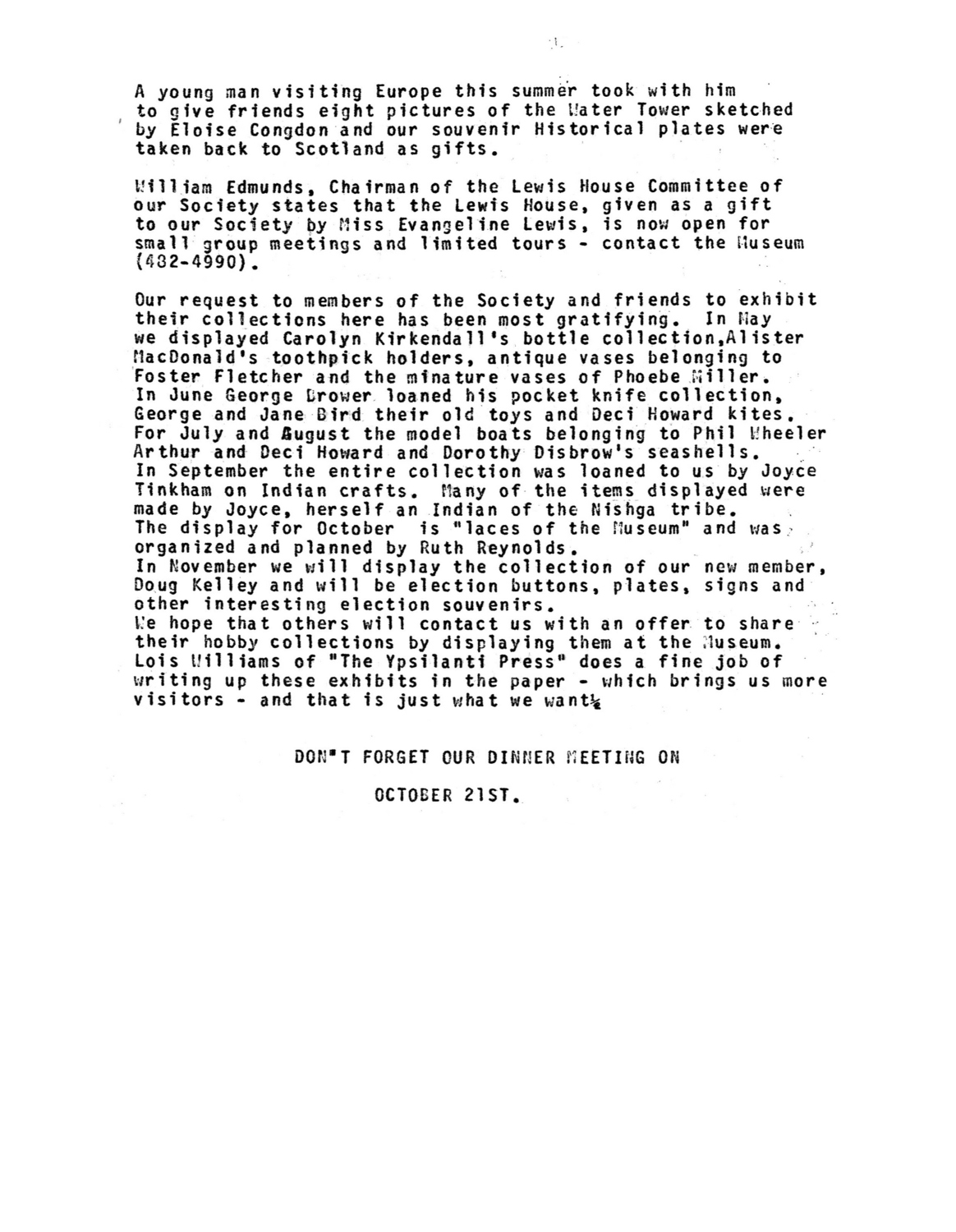 We are sorry to annouce that because of personal reasons Doris Milliman has resigned as Director of the Museum.

We are pleased to say that she is still a very active member of our Society-as a Guide and Chairman of the Administrative Committee and Board member; stops in frequently to help out and advise and is always available by phone for consultations. It takes two to take her place and Ann McCarthy and Dorothy Disbrow are attempting to do that until a permanent Museum Director can be found.

CONGRATULATIONS AND ‘THANKS’ TO THE BURGESS FAMILY made the Society float for the Fourth Parade AND WON THIRD PLACE FOR IT' an idea of Elleen Harrison's for whose theme was “Year of the Child”. and the rest of the clan are already planning, Rene minds, for the float for the 1980 parade-and also made a new float for the parade at the time of the Ypsilanti Yesterday Festival this August. The statuette won is on display at the Museum and we are very proud of it and of our prize winning float makers.

And yet another ‘thankyou’ to Rene for the poem which she wrote about the Museum and which appeared on the “Community” page of THE YPSILANTI PRESS in June.

By the way —if anyone has, or knows of anyone who has, a Farm Wagon or Float Trailer they no longer need we would love to have it. We have a spot to store it and the Burgess family can use it for years and years for all future Ypsilanti parades.

We were delighted to have so many of our schools tour the Museum this spring. Two classes came from Adams School, one of 30 and one of 31. A Class from Fletcher School brought 22 chi children in-two classes from Ardis combined and brought in 56 boys and girls. Mrs. DeRossett and her fifth grade from Chapelle School-25-came to tour and see on display the splendid Michigan Week Exhibit they had prepared. Our last group of school visitors were 18 first graders from Thurston. A Photography class from Washtenaw Community College visited the Museum as well as a Folk-Lore class from Eastern Michigan University.

The Mayor of Sturgis and a member of the Commission toured the Museum on Mayor's Exchange Day.

We very much appreciate the willingness of our Guides to take extra hours to escort our group visitors.

A young man visiting Europe this summer took with him to give friends eight pictures of the Water Tower sketched by Eloise Congdon and our souvenir Historical plates were taken back to Scotland as gifts.

William Edmunds, Chairman of the Lewis House Committee of our Society states that the Lewis House, given as a gift to our Society by Miss Evangeline Lewis, is now open for small group meetings and limited tours-contact the Museum (482-4990).

Our request to members of the Society and friends to exhibit their collections here has ben most gratifying. In May we displayed Carolyn Kirkendall's bottle collection, Alister MacDonald's toothpick holders, antique vases belonging to Foster Fletcher and the minature vases of Phoebe Miller. In June George Brower loaned his pocket knife collection, George and Jane Bird their old toys and Deci Howard kites. For July and August the model boats belonging to Phil Wheeler Arthur and Deci Howard and Dorothy Disbrow's seashells. In September the entire collection was loaned to us by Joyce Tinkham on Indian crafts. Many of the items displayed were made by Joyce, herself an Indian of the Nishga tribe.

The display for October is “laces of the Museum” and was organized and planned by Ruth Reynolds.

In November we will display the collection of our new member, Doug Kelley and will be election buttons, plates, signs and other interesting election souvenirs.

We hope that others will contact us with an offer to share their hobby collections by displaying them at the Museum. Lois Williams of “The Ypsilanti Press” does a fine job of writing up these exhibits in the paper-which brings us more visitors-and that is just what we want &half;