One of the First Settlers 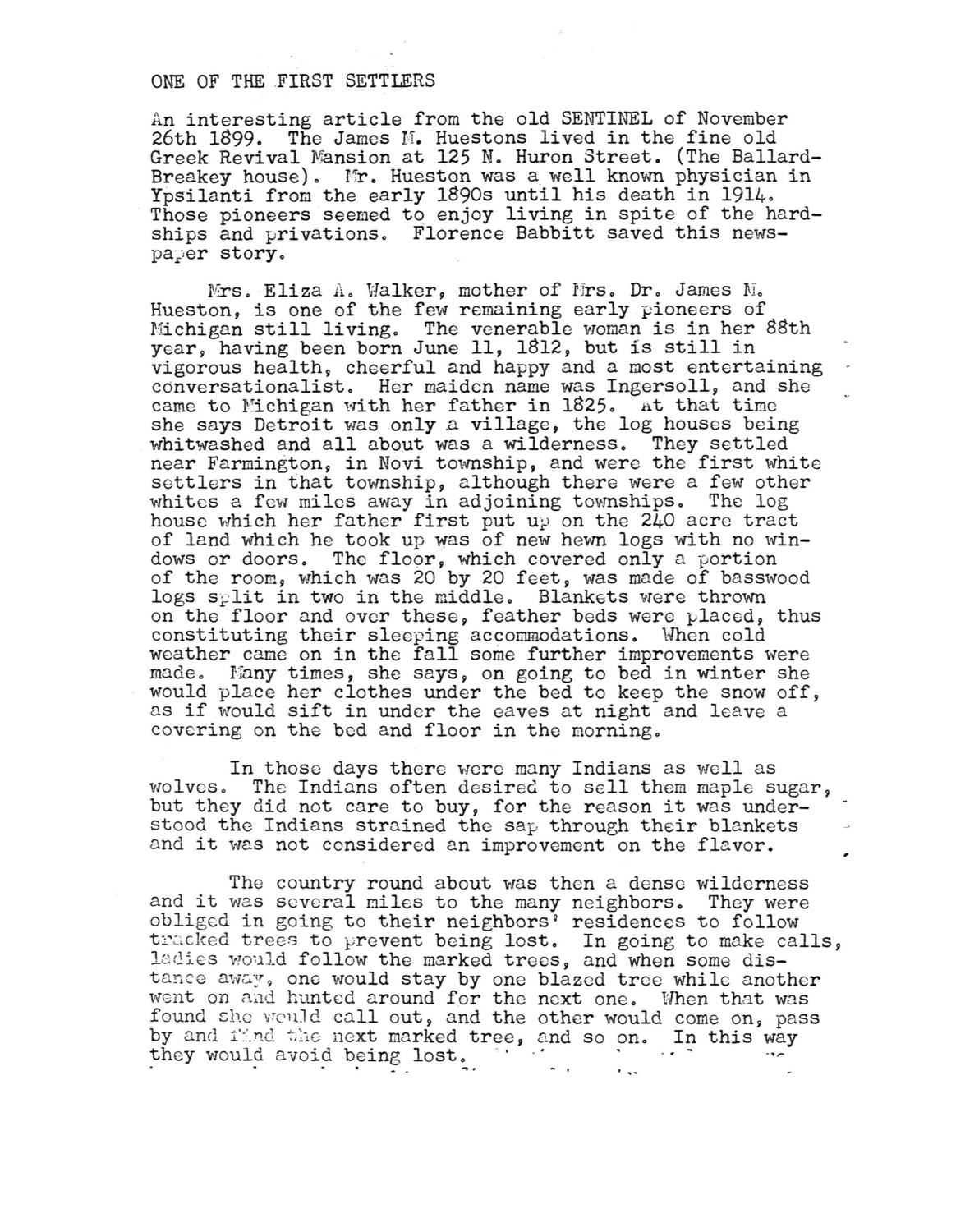 An interesting article from the old SENTINEL of November 26th 1899. The James M. Huestons lived in the fine old Greek Revival Mansion at 125 N. Huron Street. (The Ballard-Breakey house). Mr. Hueston was a well known physician in Ypsilanti from the early 1890s until his death in 1914. Those pioneers seemed to enjoy living in spite of the hardships and privations. Florence Babbitt saved this newspaper story.

Mrs. Eliza A. Walker, mother of Mrs. Dr. James M. Hueston, is one of the few remaining early pioneers of Michigan still living. The venerable woman is in her 88th year, having been born June 11, 1812, but is still in vigorous health, cheerful and happy and a most entertaining conversationalist. Her maiden name was Ingersoll, and she came to Michigan with her father in 1825. At that time she says Detroit was only a village, the log houses being whitwashed and all about was a wilderness. They settled near Farmington, in Novi township, and were the first white settlers in that township, although there were a few other whites a few miles away in adjoining townships. The log house which her father first put up on the 240 acre tract of land which he took up was of new hewn logs with no windows or doors. The floor, which covered only a portion of the room, which was 20 by 20 feet, was made of basswood logs split in two in the middle. Blankets were thrown on the floor and over these, feather beds were placed, thus constituting their sleeping accommodations. When cold weather came on in the fall some further improvements were made. Many times, she says, on going to bed in winter she would place her clothes under the bed to keep the snow off, as if would sift in under the eaves at night and leave a covering on the bed and floor in the morning.

In those days there were many Indians as well as wolves. The Indians often desired to sell them maple sugar, but they did not care to buy, for the reason it was understood the Indians strained the sap through their blankets and it was not considered an improvement on the flavor.

The country round about was then a dense wilderness and it was several miles to the many neighbors. They were obliged in going to their neighbors residences to follow tracked trees to prevent being lost. In going to make calls, ladies would follow the marked trees, and when some distance away, one would stay by one blazed tree while another went on and hunted around for the next one. When that was found she would call out, and the other would come on, pass by and find the next marked tree, and so on. In this way they would avoid being lost.

At night, when wolves were howling about the house, a fire would be built outside, as they would not come near a fire.

For a number of years there were no churches or schools and a traveling proacher would hold meetings in groves in the summer time. Later a church was built off toward Northville and they would drive here on Sunday with an ox team and make a day of attending meeting. Mrs. Walker has no patience with those who think they can't stand the short services of the present day. She thinks the tendency to make a holiday of Sunday is all wrong, and does not believe in the club life of the present day. She thinks some of the supposed advancements of recent years are not really such at all.

She visited Ann Arbor when there were but two or three buildings there. Also Chicago when the lighthouse was about all there was in theswamp to distinguish the location of the present great city. At Jackson, she says, the houses were built on stilts to keep above water.

Mrs. Walker is one of a family of 12 children, and is herself the mother of seven. She was married at Novi in 1833 and lived there until 1876, when she went to Lansing and lived there for 10 years. During the past 13 years she have lived in Ypsilanti with her daughter. She is well preserved for a woman of her age and experiences, but complains because she cannot read, her sight being poor from cataract eyes. She seems to have learned the lessen thoroughly of how to grow old in years while remaining young in spirit.