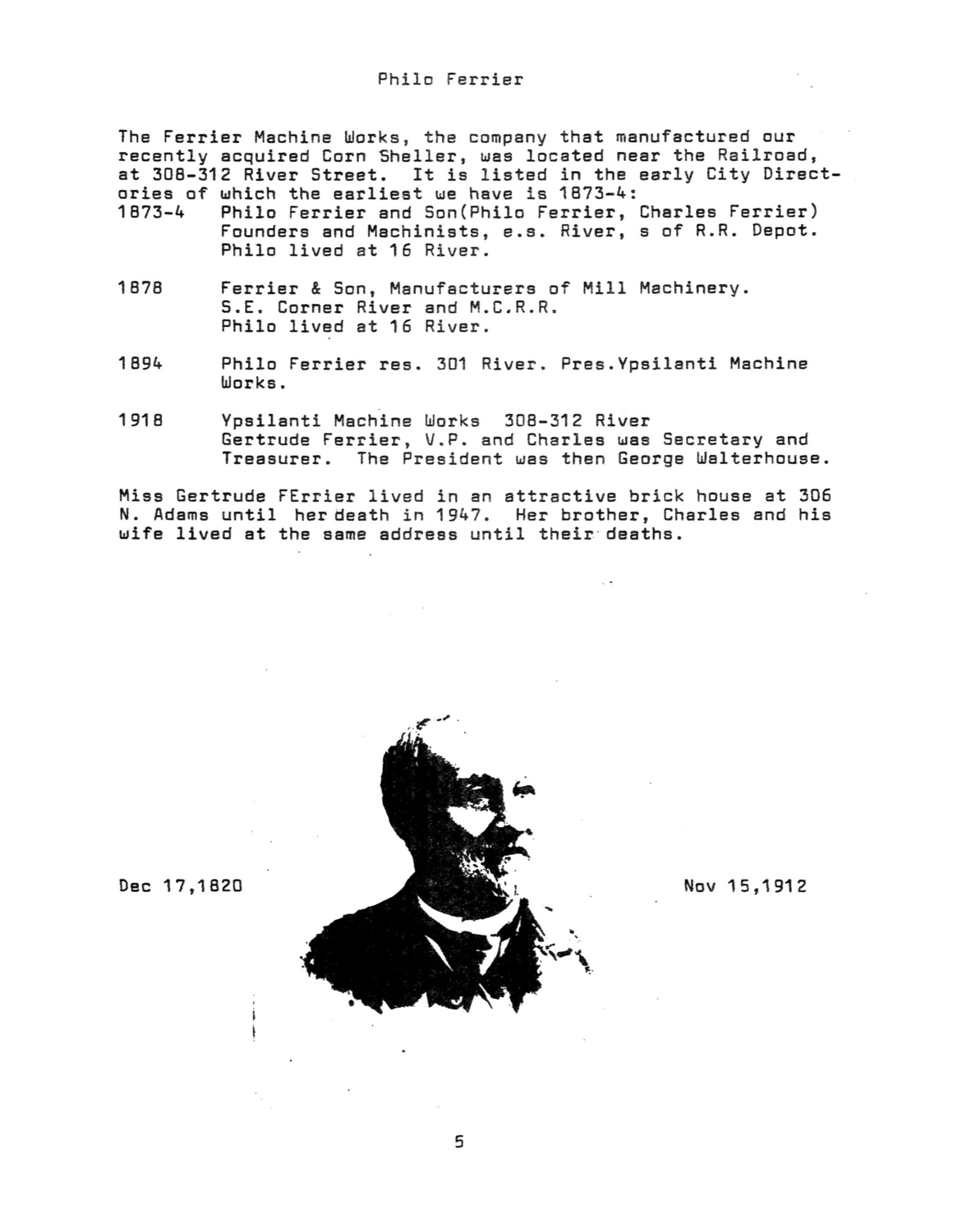 The Ferrier Machine Works, the company that manufactured our recently acquired Corn Sheller, was located near the Railroad, at 308-312 River Street. It is listed in the early City Directories of which the earliest we have is 1873-4:

Miss Gertrude FErrier lived in an attractive brick house at 306 N. Adams until her death in 1947. Her brother, Charles and his wife lived at the same address until their deaths.

Philo Ferrier, one of the oldest residents of Ypsilanti and the last surviving member of Ypsilanti's first council died after a short illness Friday. He was born in Bath, Steuben County, N.Y., December 17, 1820. In 1844 he was married to Maria E. Munson of Pontiac and located in Detroit, then a city of about ten thousand inhabitants. He was then engaged in mill building in adjacent towns and also for a time connected with the old Detroit Locomotive Works.

He located in Ypsilanti permanently in 1857, having come to finish the original Presbyterian Church begun by his brother John, who died leaving it unfinished. Later he engaged in the foundry business with M.L. Shutts. He was married in 1859 to Mary L. BRown. He was the last surviving member of the first council of Ypsilanti, 1858, a charter member of Lodge 128 F. & A. M., and was made a member of Ann Arbor Commandary, No. 13, June 23, 1868.

Mr. Ferrier was a man of wide reading and progressive ideas, and to the last days of his life kept his interest in all the affairs of the day. He had voted for 18 presidents and was able to go to the polls last week, where he voted for Woodrow Wilson and equal suffrage. From early manhood he had been a close friend and companion of the late D.L. Quirk, who was two years his senior.

Mr. Ferrier often recalled the old days when he was a member of the first common council of Ypsilanti, and some time ago he made a list of this original governing body of the city and discovered that of the nine members of the council he was the only one living.

The names of the first governing body in Ypsilanti were given by Mr. Ferrier as follows:

The date of this first council was believed by Mr. Ferrier to have been 1858.
Mr. Ferrier is survived by a widow, a son, Charles P. Ferrier, two daughters, Mrs. Lucy Orcutt and Miss Gertrude Ferrier, and a sister, Mrs. Mary Rowe of Boise, Idaho.

Funeral services will be held at the residence Monday afternoon at three o'clock, conducted by the Rev. William H. Gardam.
The above Notice appeared in the local newspaper.