Articles from the Ypsilanti Record, 1922 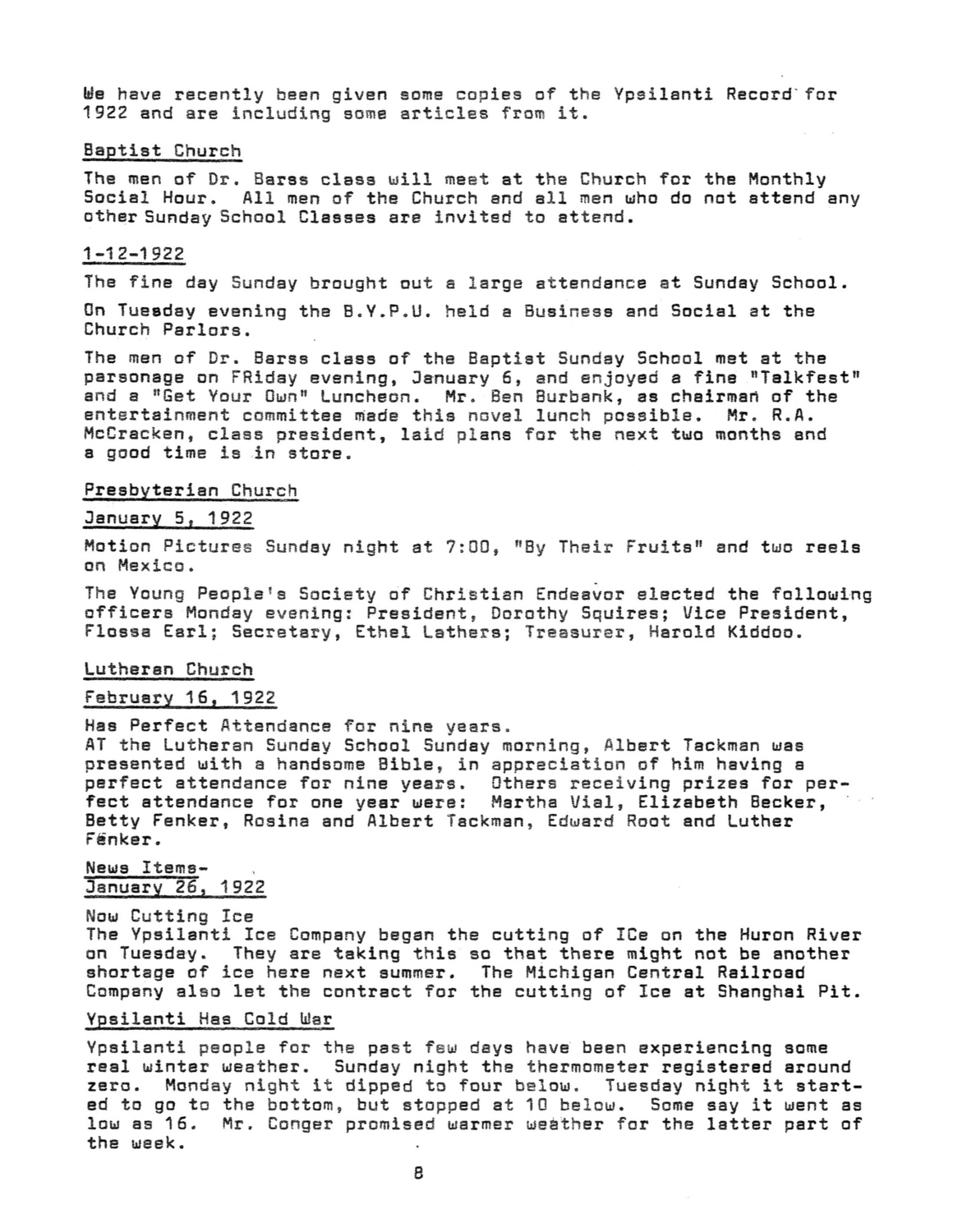 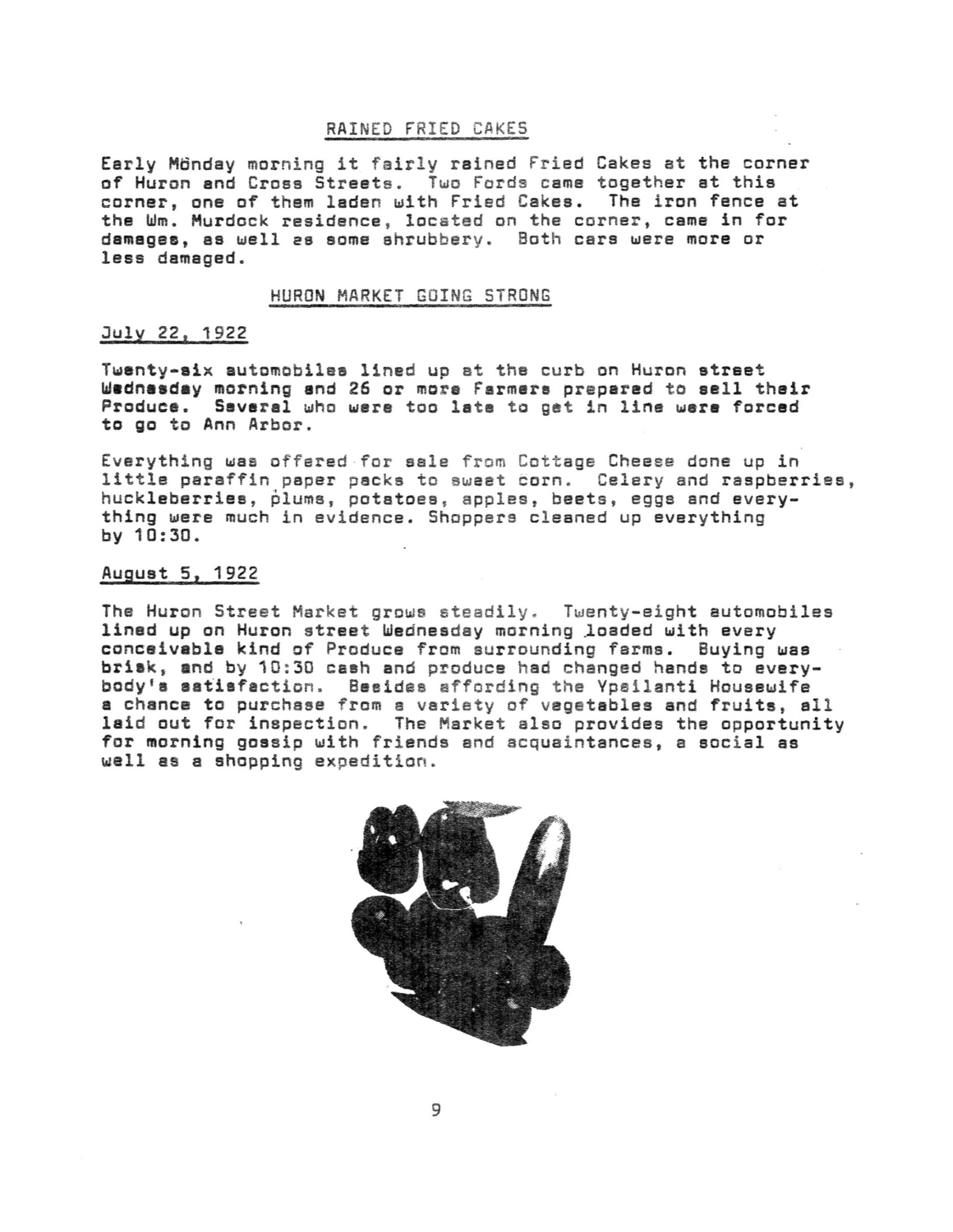 We have recently been given some copies of the Ypsilanti Record for 1922 and are including some articles from it.

The men of Dr. Barss class will meet at the Church for the Monthly Social Hour. All men of the Church and all men who do not attend any other Sunday School Classes are invited to attend.

The fine day Sunday brought out a large attendance at Sunday School. On Tuesday evening the B.Y.P.U. held a Business and Social at the Church Parlors.

The men of Dr. Barss class of the Baptist Sunday School met at the parsonage on FRiday evening, January 6, and enjoyed a fine “Talkfest” and a “Get Your Own” Luncheon. Mr. Ben Burbank, as chairman of the entertainment committee made this novel lunch possible. Mr. R.A. McCracken, class president, laid plans for the next two months and a good time is in store.

Motion Pictures Sunday night at 7:00, “By Their Fruits” and two reels on Mexico.

The Ypsilanti Ice Company began the cutting of Ice on the Huron River on Tuesday. They are taking this so that there might not be another shortage of ice here next summer. The Michigan Central Railroad Company also let the contract for the cutting of Ice at Shanghai Pit.

Ypsilanti people for the past few days have been experiencing some real winter weather. Sunday night the thermometer registered around zero. Monday night it dipped to four balow. Tuesday night it started to go to the bottom, but stopped at 10 below. Some say it went as low as 16. Mr. Conger promised warmer weather for the latter part of the week.

Early Monday morning it fairly rained Fried Cakes at the corner of Huron and Cross Streets. Two Fords came together at this corner, one of them laden with Fried Cakes. The iron fence at the Wm. Murdock residence, located on the corner, came in for damages, as well as some shrubbery. Both cars were more or less damaged.

Twenty-six automobiles lined up at the curb on Huron street Wednesday morning and 26 or more farmers prepared to sell their Produce. Several who were too late to get in line were forced to go to Ann Arbor.

Everything was offered for sale from Cottage Cheese done up in little paraffin paper packs to sweet corn. Celery and raspberries, huckleberries, plums, potatoes, apples, beets, eggs and everything were much in evidence. Shoppers cleaned up everything by 10:30.

The Huron Street Market grows steadily. Twenty-eight automobiles lined up on Huron street Wednesday morning loaded with every conceivable kind of Produce from surrounding farms. Buying was brisk, and by 10:30 cash and produce had changed hands to everybody's satisfaction. Besides affording the Ypsilanti Housewife a chance to purchase from a variety of vegetables and fruits, all laid out for inspection. The Market also provides the opportunity for morning gossip with friends and acquaintances, a social as well as a shopping expedition.